Folks coming to Texas tend to know a little about what type of food to expect. It’s going spicy, rich, and it will fill you up. There’s probably going to be some Mexican influence. And there’s definitely going to be a lot of meat dishes.

Even as Houston grows its reputation as an increasingly deliciously diverse destination, one cuisine remains a stereotypical standout — and for good reason. Barbecue here is smoky and seasoned and saucy. It’s mostly beef, largely informed by the culture and traditions of the German and Czech immigrants who settled in the middle part of the state in the 1800s. And, of course, there’s plenty of Mexican-style barbacoa to be found here, too. This is Pearland, Texas barbecue — and it might not be at the top of your culinary bucket list right now, but it should be.

In the sleepy suburb of Pearland, located southeast of downtown Houston and only about 50 miles from the coast, Texans and travelers to the state will find some of the finest Texas barbecue around. At just over an hour from the charming beach town of Surfside, Pearland makes an ideal destination for a delicious meal before you head toward the ocean. Here are a handful of Pearland, Texas barbecue restaurants worth a literal pit stop on a drive to the beach.

Where to eat Pearland, Texas barbecue

The newest addition to the smokin’-hot scene is inconspicuously housed in a grocery store. The hometown favorite — whose original location is in the Acres Homes neighborhood in north Houston and was heralded by Anthony Bourdain on a 2016 episode of Parts Unknown — just opened a Pearland outpost inside Kroger. With a menu dubbed “limited” there is still quite generous in its offerings. Barbecue plates and sandwiches that serve one come with a choice of classic sides, while family packs that serve up to 15 are an incredible deal. Speaking of serving 15: The famous 10-pound Roy Burns Baked Potato, named for the founder, is actually three potatoes, piled high with a pound each of ribs, sausage, and chopped beef, plus layers of cheese, sour cream, and sauce. There is limited indoor seating available for those who dare to tackle this puppy in public.

James Beard-nominated, Le Cordon Bleu-trained chef-restaurateur Ronnie Killen is a Pearland native, which may explain his affinity for setting up shop all over this town. His eponymous restaurants are all fantastic — Killen’s Steakhouse, for example, is a fine-dining stalwart — but the brisket and homemade sausage at his barbecue joint has earned raves from food critics nationwide. Opened in 2013, the nondescript appearance of a stucco building with a front porch belies its history as a one-time elementary school cafeteria. Inside, old-school trays are piled high with soulfully smoked meats and standard sides — creamed corn, baked beans — from 11 in the morning until Killen’s sells out.

One of the oldest businesses in Pearland, Central Texas Style Barbecue offers a tad more than its simple name suggests. Open daily from 10 in the morning to 8 at night, this spot looks like a roadside stand. There’s a vintage red, blue and yellow sign affixed to the roof that makes it stand out if you’re driving by. Its menu has countless specials named after regulars and offering different portions; sides and extras include deviled eggs, sweet cornbread, broccoli-rice casserole, and entrée-size servings of jalapeno-sausage-loaded pinto beans with rice. There’s even a Cuban sandwich, and a vegan version of the barbecue-stuffed baked potato. Go on Wednesday to score Eddie’s Grilled Cheese Brisket sandwich, with chopped beef held between two slices of Texas toast with ooey-gooey melted cheese.

A gas station, convenience store, live-music venue, drive-through restaurant and five-star barbecue joint all in one? That’s Texas for ya. Ten years ago, two Pearland-native brothers opened Big Horn BBQ; their wives work in the fun, Western-themed gift shop. Here, perfectly smoked meat gets stuffed in everything from burgers and sandwiches to tacos and biscuits, starting at 6 in the morning. The fall-off-the-bone pork ribs and piled-high nachos are two exceptional value items, and the barbecue chicken is moist and saucy. Save time to peruse the adjoining gourmet market — and take home pre-packaged sausage to enjoy later.

When the pandemic hit, Carl Wallace took a leap of faith and shifted his backyard passion to a full-time pursuit. Now, Seven Seeds Barbecue, named for his seven kiddos, has two food trucks. Both are permanently parked in Pearland, just a few miles from each other; one is at the brand-new Comida Park food truck park seven days a week. The menu is simple but well executed. Seven Seeds’ custom pit-smoker trailer churns out the likes of turkey legs, pork butt and classic brisket, of course, all paired with sides. Wallace even sells whole briskets, smoked and sliced with sides of sauce, with a 48-hour notice. The flexibility provided by the food-truck life allows for inventive, limited-run specials — think a triple-decker burger topped with chopped brisket, or brisket bowls with Bloody Marys. 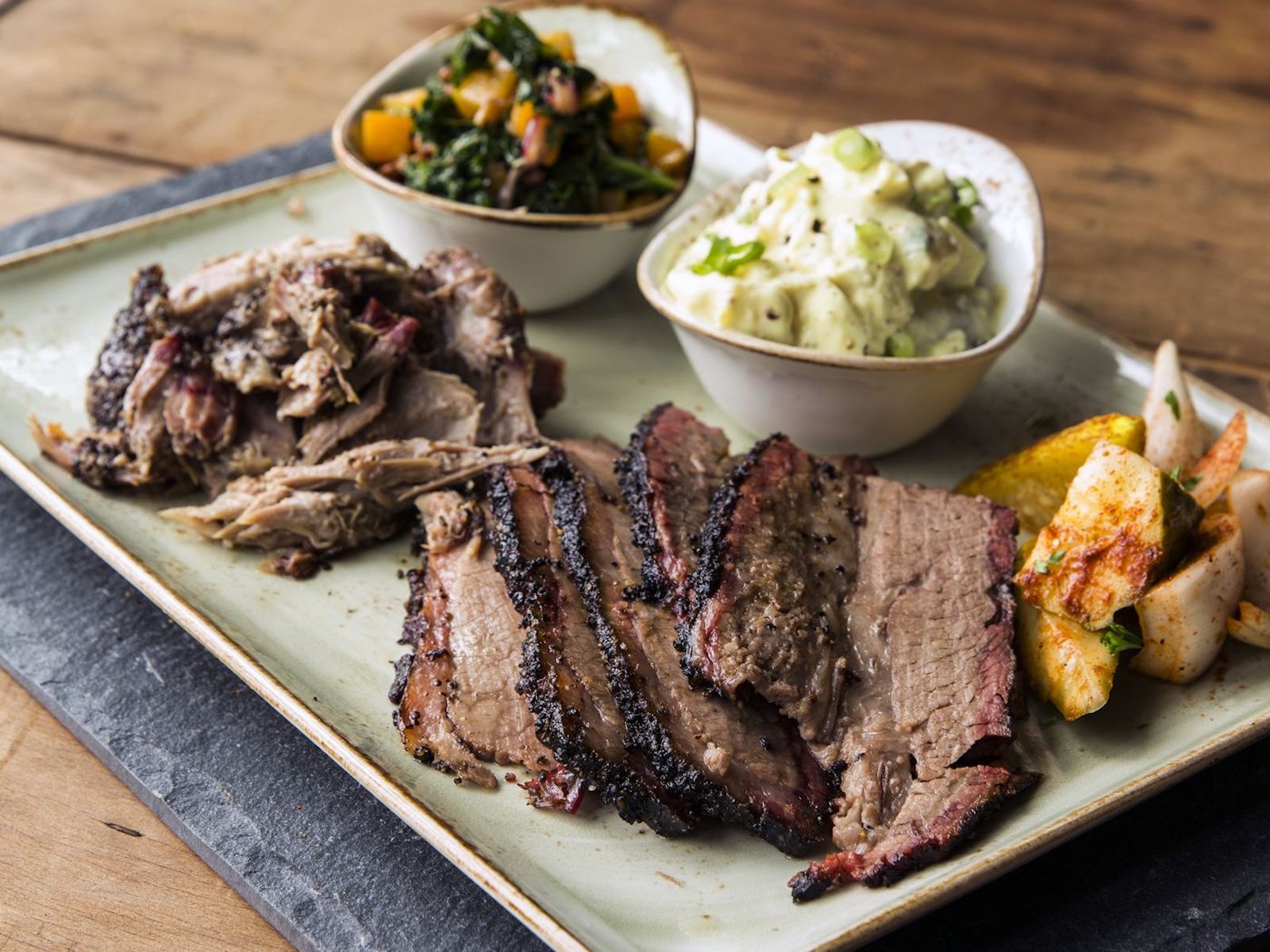 It may not be in Pearland proper, but barbecue in the Houston area is nearly synonymous with the Pappas name and family. One of their most recent openings is Pappas Delta Blues Smokehouse, right down the freeway from Pearland in nearby Webster. These guys have been at this for generations, so it’s no surprise that the sit-down dining experience here is unparalleled, with experienced servers bringing out plate after plate of barbecue — plus smoked boudin and buttermilk-fried chicken — accompanied by craft cocktails and a serious whiskey program.

The Truth About Artificial Vanilla Extract (and Why You Should Always Splurge for Pure)
7 Sonoma Wine Tasting Rooms That Are the Perfect Introduction To the Region
These 7 Cannabis-Fueled Restaurants Will Take You To New Highs in the Most Delicious Way
Why Japanese Miyazaki Mangoes Sell for Almost $4,000 a Pair
Every Michelin Star Restaurant in Las Vegas and How Much They Cost

Jersey City Restaurants Are Just as Good as Anything in NYC. Here’s Where To Go.