Life-changing culinary experiences don’t tend to top traveler itineraries in Indiana like they do in places like New York or California. Indeed, unless you plan to hunker down over the casarecce at Bluebeard or submit to reframe your entire perception of a grilled cheese sandwich at Milktooth, the state’s dining reputation tends to fall somewhere between southern hoodwink and coastal castaway.

But then there’s the Hoosier sugar cream pie (also known simply as sugar cream pie), which is arguably the most genius use of sugar, salt, heavy cream, and vanilla to ever grace an oven. There’s even a hefty dose of crunch around the edges, just for good measure. One bite of this sugary, creamy, foam-in-your-mouth masterpiece is nearly enough to uproot even the hardiest Possum Pie loyalists that Arkansas has to offer.

So how was something so pure, and so perfect, created in Indiana? Where is the best Hoosier sugar cream pie? Are Hoosiers really all that sweet? All the answers are here, but be warned — the bakery case at your local Village Inn won’t satisfy the craving that comes with this newfound knowledge.

First thing’s first: How did anyone come up with this masterpiece? 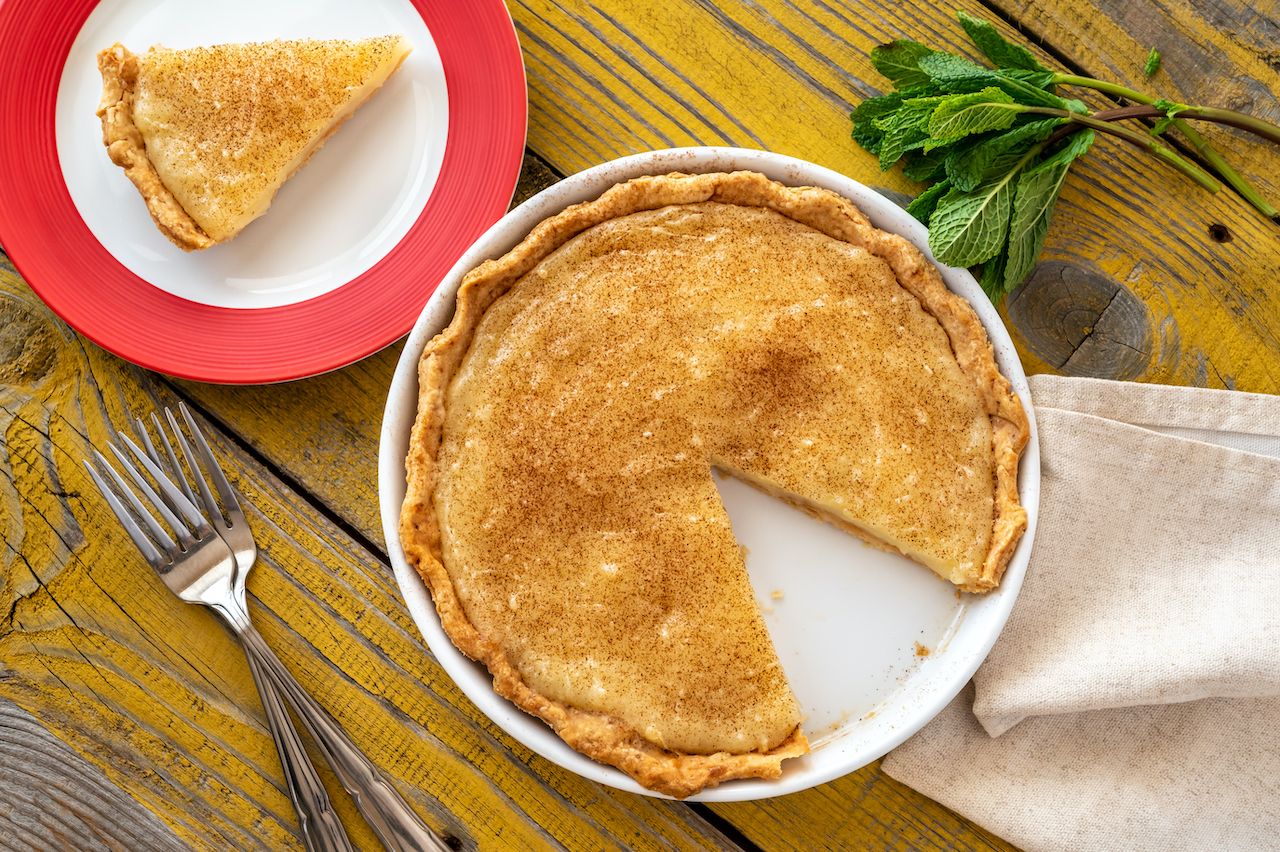 There are two groups who usually get credit for creating the Hoosier sugar cream pie. The first theory is that it all started with a group called the Shakers. If you’ve never heard of them, you’re not alone. Forbes puts America’s remaining Shaker population at two, and despite the fact that one is a man and the other a woman, the group maintains a steeped loyalty to celibacy, which inherently makes it tough for their movement to thrive. The Shakers are a Christian sect originally from Britain who are adamant that the second appearance of Christ will happen, and who earned their name because of their tendency to succumb to ungoverned and erratic dancing during worship service. They crossed into Indiana and settled West Union in Knox County in 1811. Though they abandoned the settlement in 1827, this origin story posits that the Shakers’ sweet mark on the Hoosier state’s culinary legacy is as strong as ever.

Others claim it was actually Quakers who came to Indiana from North Carolina who invented the sugar cream pie. Regardless of which religious group gets official credit, the first known sugar cream pie recipe, which is today published in The Hoosier Cookbook, came from eastern Indiana in 1816. It was a regional staple by the time the Great Depression struck more than a century later. With supplies and budgets tightened, the sweet pie exploded in popularity throughout Indiana thanks to its cheap and basic ingredients and its mass appeal (who doesn’t love sweet and crunchy, especially when times are tough?).

The appeal continued long after the 1930s through good and bad economic times. In 2009, the state officially named the Sugar Cream Pie its unofficial state pie.

So what exactly is in this epic Hoosier sugar cream pie? 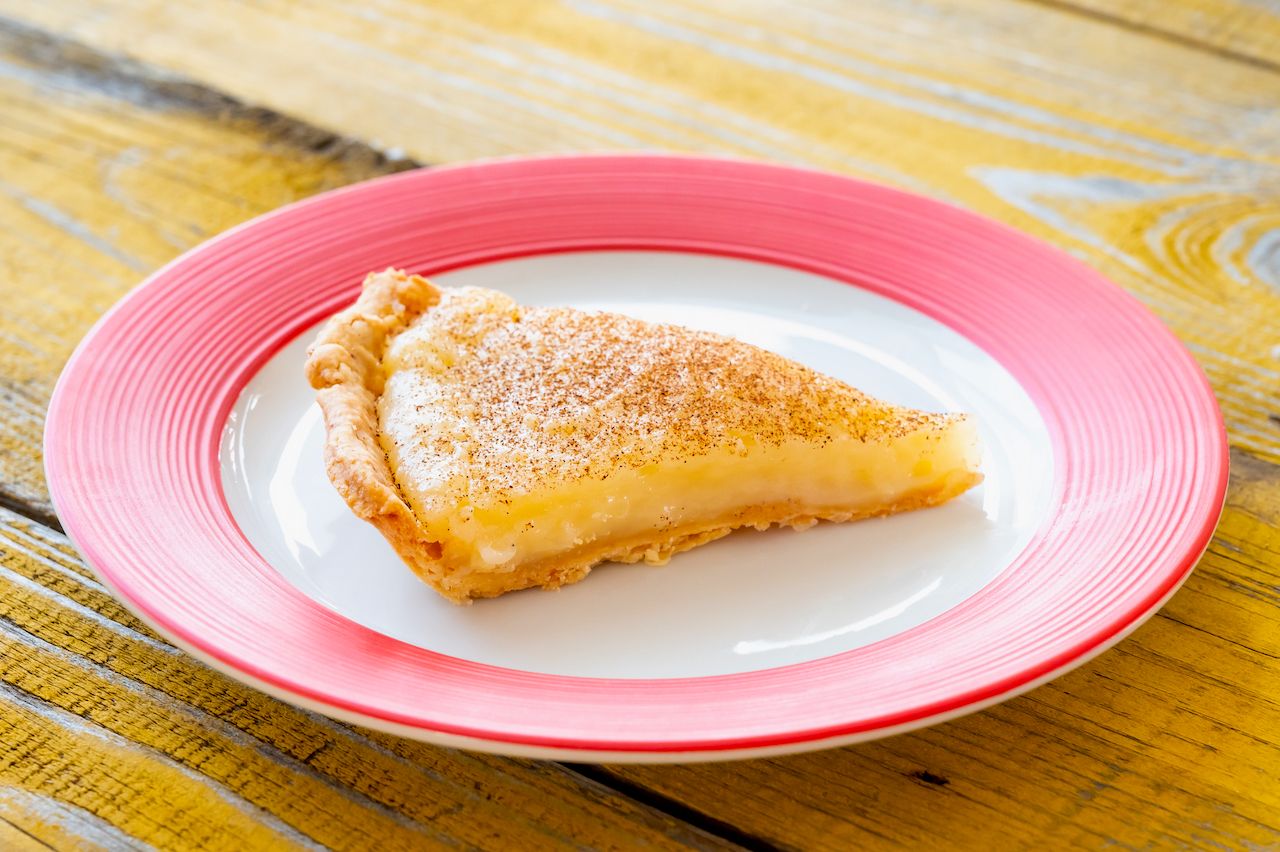 The ingredient list is rather straightforward. The filling is made of both granulated and brown sugar, salt, a heavy pour of heavy cream, and vanilla paste or extract. There’s a traditional pie crust, of course, and the whole shebang is dusted with confectioner’s sugar just in case all that other sugar and cream didn’t do the trick. While most purveyors in Indiana bake their own pie crusts, if you were to try baking this pie at home, you could use a frozen crust from the grocery store.

The best thing about the Hoosier sugar cream pie, other than the pie itself, is that this is one dish that has stayed true to tradition. Any tendency toward innovation is unequivocally bashed into submission by the pie’s legions of loyal noshers (see, for example, how the original 1816 recipe is still circulated). Maybe — MAYBE — someone will dash a bit of cinnamon on top. But one thing the sugar cream pie is not is a custard pie. There are no eggs in a traditional Hoosier sugar cream pie.

Where to find the best Hoosier sugar cream pie 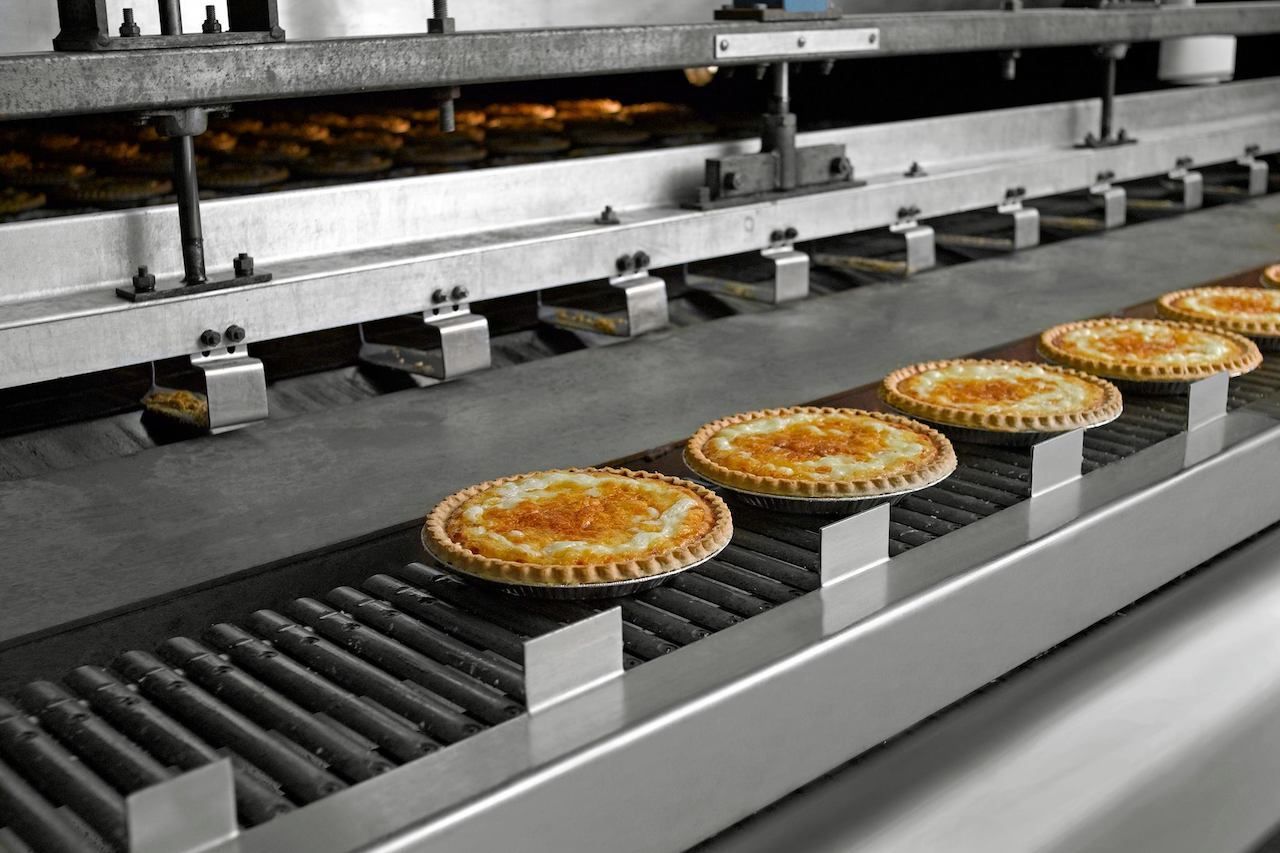 For the true diehard, Indiana Food Byways developed a Hoosier Pie Trail, which takes you to 24 cafes across the state that are known for their sugar cream pie (among other varieties). That’s a lot of driving and a lot of pie, yet you can’t go wrong by making a stop at the two places below. But hey, if you do decide to go to the full 24, your slice of pie will inevitably be served with a smile each time in grand Hoosier tradition — proving that yes, Hoosiers are indeed that sweet.

Grindstone Charley’s: Most airborne arrivals to Indiana will touch down in Indianapolis, where a Hoosier sugar cream pie is never far away. Google Maps puts Grindstone Charley’s, a modern restaurant and bar with everything from the subject at hand to the city’s best chicken sandwich, at 14 minutes from the airport. So assuming you don’t have a checked bag and there’s a cab waiting for you outside the terminal, you could dig into a slice of pie within a half-hour of deplaning. Grindstone Charley’s imports its sweet pie from My Sugar Pie, which isn’t a bad thing because its known as one of the best Hoosier sugar cream pie makers in Indiana. Shapiro’s, on the Old Southside, and Ralph’s Great Divide at Lockerbie Square also serve excellent sugar pies.

Wick’s Pies: Here you’ll find one pie you absolutely must try. It’s located in Winchester and produces more than 750,000 sugar cream pies each year — so you know the spot has the recipe down pat. The shop was started by Duane “Wick” Wickersham in the 1940s and has since become the standard-bearer of the Hoosier sugar cream pie. You can also take a tour of the factory and see for yourself how such a simple list of ingredients can be turned into such perfection. As a hack for out-of-staters, you can order Wick’s Pies for national delivery.

Food + DrinkThe Signature, Iconic Pie for Every State in the US
Tagged
Dessert Restaurants + Bars Indiana, United States
What did you think of this story?
Meh
Good
Awesome

How To Plan the Ultimate Trip To Indiana Dunes National Park

The US Just Got a New National Park, and It’s Stunning