Whether it’s an animal, a hunter, a plant, or a handprint, there’s something magical about coming face-to-face with humanity’s earliest art. Cave paintings (called “pictographs”) and carvings (or “petroglyphs”) can appear primitive-looking, but these ancient markings point to the advent of human creativity, when we started expressing our ideas through images. The art is often situated in caves or other shielded locations, so it tends to remain well-preserved, protected from damaging sunlight and weather. Here are seven places around the world where you can get your eyes on ancient art crafted by our prehistoric ancestors. 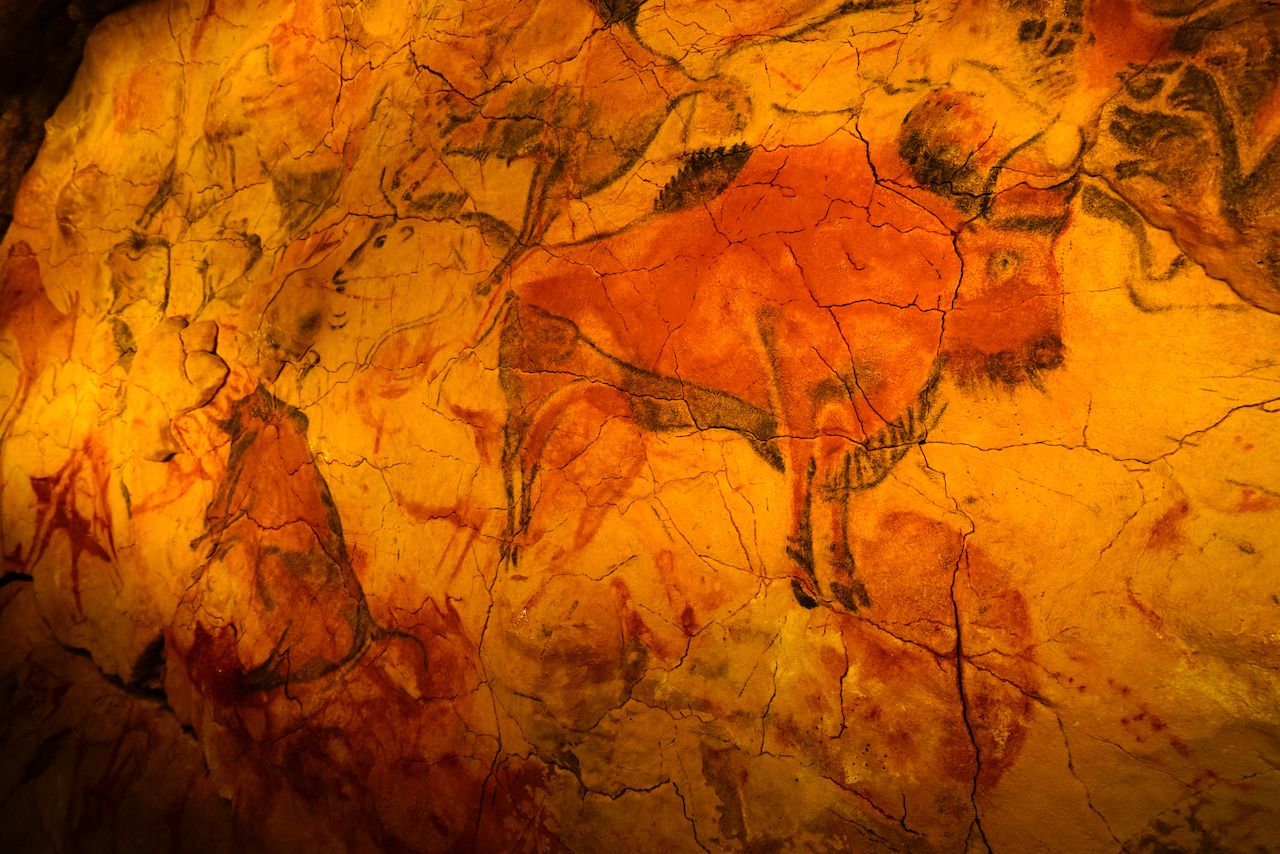 The autonomous region of Cantabria in northern Spain is home to fascinating Ice Age caves chock-full of ancient art. Probably the most famous is Altamira, a UNESCO World Heritage site. Every week, the Museum of Altamira chooses only five visitors who can don a biohazard suit and enter the cave for a 37-minute guided tour. In the cave, they’ll see faint outlines of Paleolithic paintings of animals, most notably the famous polychrome bison, as well as the ochre-colored human hands that introduce nearly every art history book. The paintings are up to 37,000 years old. We’re unsure who painted them but one thing is clear: It’s easier to see the designs, colors, and placements in the fabulous cave replica in the adjacent museum. 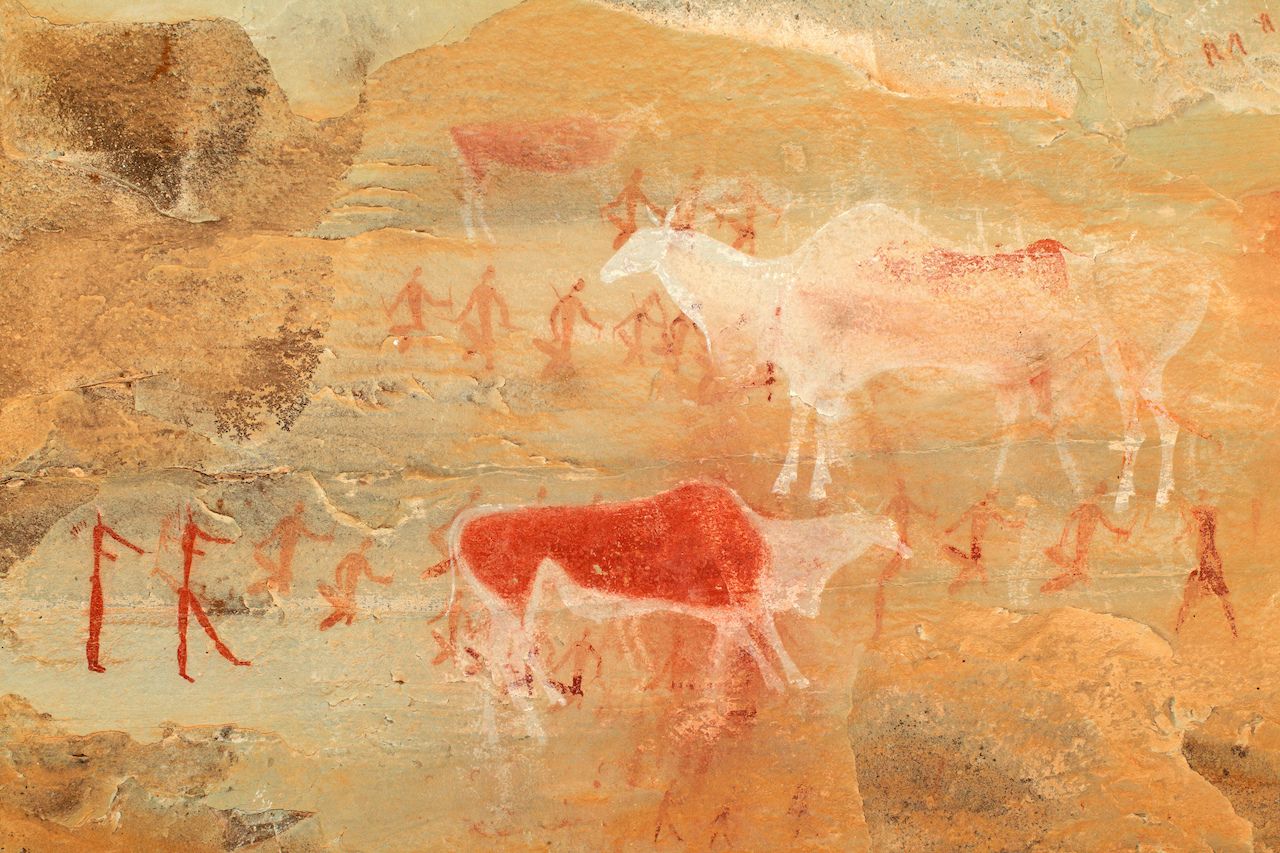 Game Pass shelter is located in the foothills of the Drakensberg Mountains on the the Kamberg Nature Reserve. The shelter features panels known as the “Rosetta Stone” of South African rock art because it helped researchers crack the code of local rock art symbols and San religious metaphors. The elaborate, orange, black, red, and white designs were made by artisans from the San (known as “Bushmen”) culture, 150 to 2,500 years ago. Many of the 40,000-plus images are combined animal and human shapes. Others show shamen crouched in a dying position and hunters wrapped in skin cloaks chasing eland antelopes. You can take a three-hour, moderately difficult guided walk from the Kamberg Rock Art Center, or watch a 20-minute documentary there if you’re short on time. 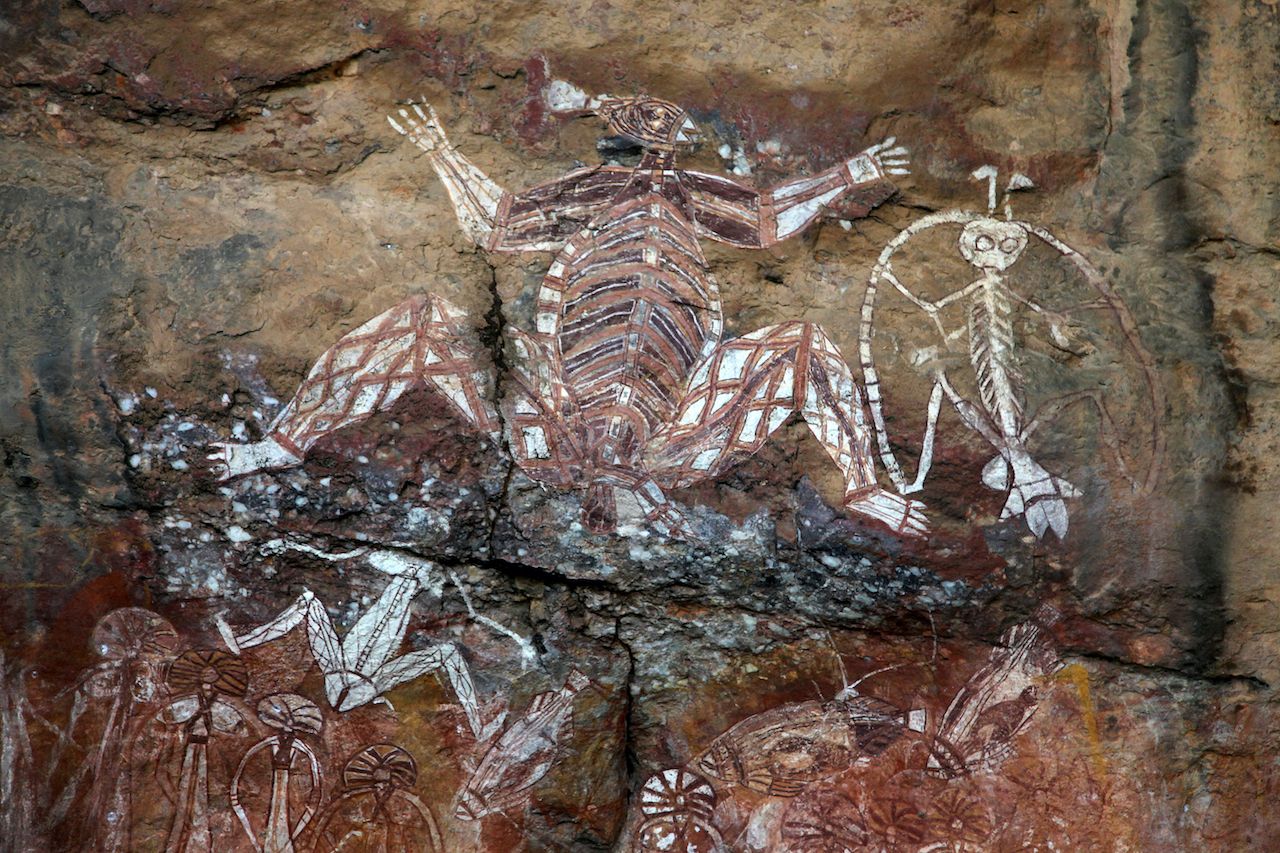 Continuously inhabited for 50,000 years, Kakadu National Park in Australia’s Northern Territory is home to several extraordinary rock art sites. The most famous of those are Ubirr and Nourlangie (Burrungkuy), located in the northeast of the park, where ancient galleries illustrate the spiritual beliefs of the Bininj people, their ways of life as hunters and gatherers, and the wildlife that existed around them (some of which, like the Tasmanian tiger, are now extinct). The main site in Nourlangie (Burrungkuy), the Anbangbang Gallery, has creation stories about Namarrgon, the sacred Lightening Man. Another particularly interesting aspect of the site is that nearby flat rocks feature grounded-out pots that hold remnants of the ochre used to paint the art. The rock art sites, or gunbim, as they are called by the Aboriginal people of the region, can be visited thanks to ranger- and Bininj-led tours. 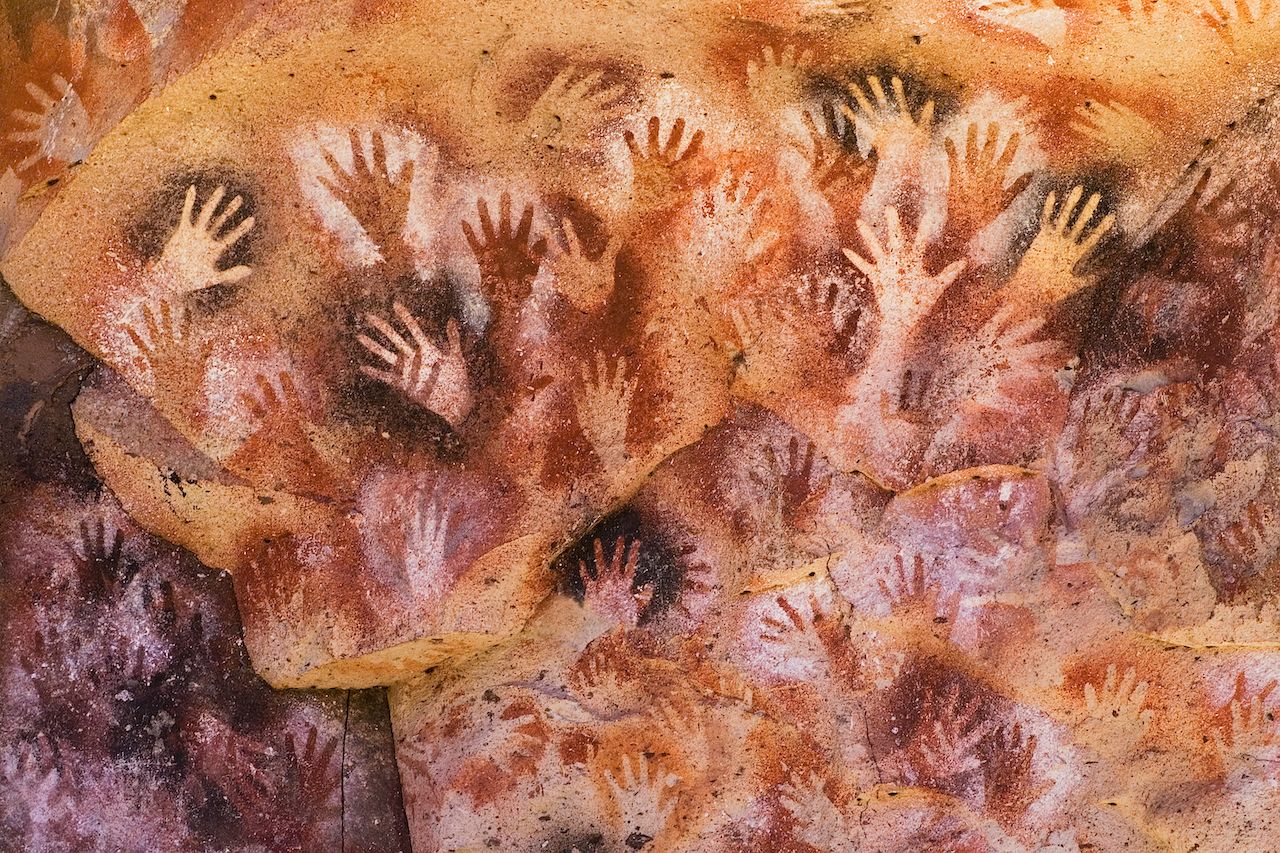 Cueva de los Manos, or Cave of the Hands, is a UNESCO World Heritage site in the Santa Cruz Province of Argentine Patagonia. The amazing rock art site gets its name from the hundreds of stenciled human hands (most of which are left hands) painted in the cave, but the caves’ walls also bear depictions of hunting scenes, local animals, human figures, and abstract designs. The famous pictographs of Cueva de los Manos date back between 9,500 and 13,000 years ago. Tours of the cave are available from Perito Moreno and Los Antiguos. 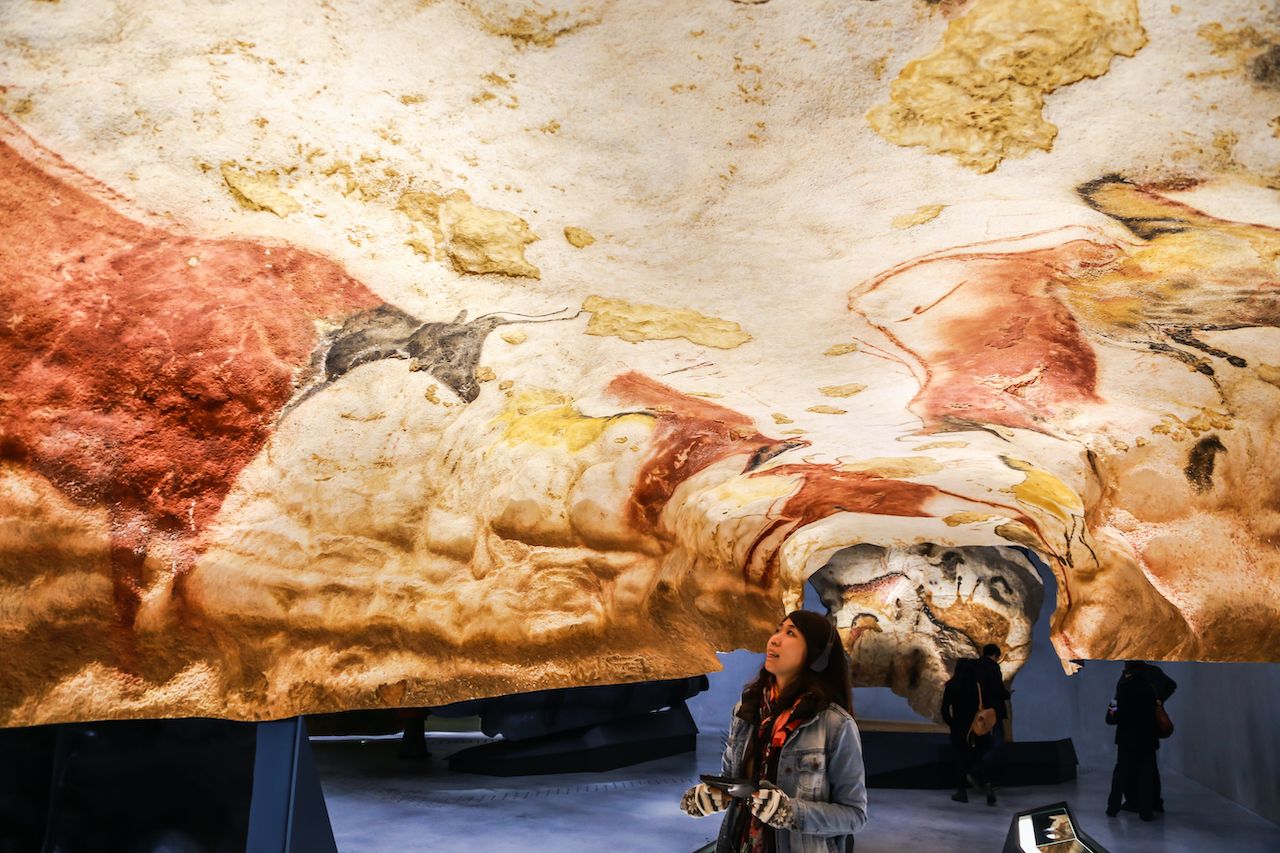 From the Rouffignac cave, also known as the “Cave of a Hundred Mammoths,” to the much more famous Lascaux caves, the Dordogne region of southwestern France is dotted with 25 UNESCO-protected ancient art caves. Near the town of Montignac, the Lascaux caves complex is an easy site to visit. You can no longer enter the most famous cave as scientists closed it in 1963 because simply breathing on the paintings can damage them. So, teams of researchers and facsimile experts crafted the adjacent interactive replica Lascaux IV, or “The Lascaux Experience.” There, you can virtually see the famous “Hall of Bulls,” “Upside Down Horse,” and all of the cave’s major highlights that exist right down the road. 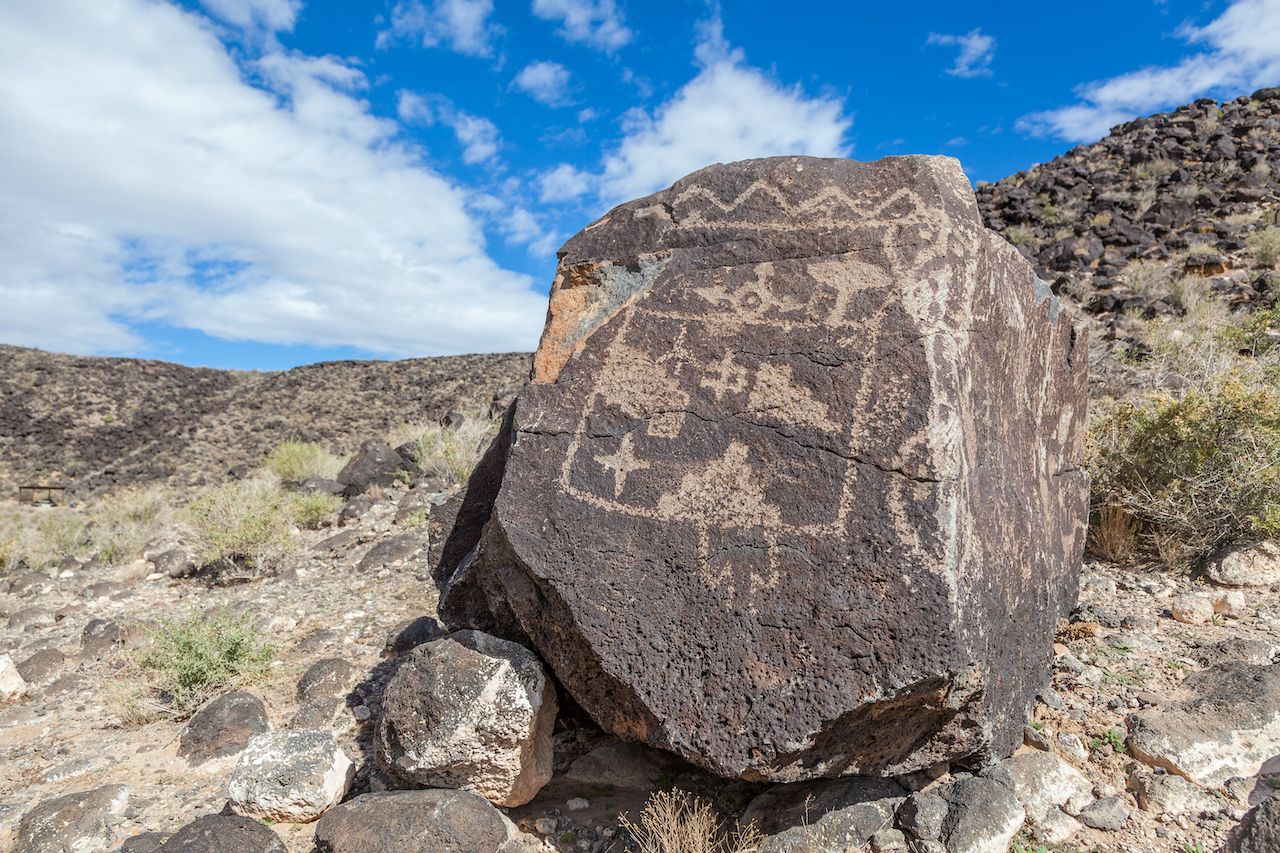 There is no shortage of places to view well-preserved petroglyphs in the southwestern region of the United States. One example is Petroglyph National Monument outside Albuquerque, New Mexico. Its four major sites showcase almost 25,000 petroglyph images, including animals, people, and geometric symbols that the ancient Puebloans pecked through the desert patina of volcanic rocks. Granted, these designs are not as old as some other sites, dating back to 1300, but many of the designs from the late-1600s depict the Puebloans’ interactions with the area’s original Spanish settlers. 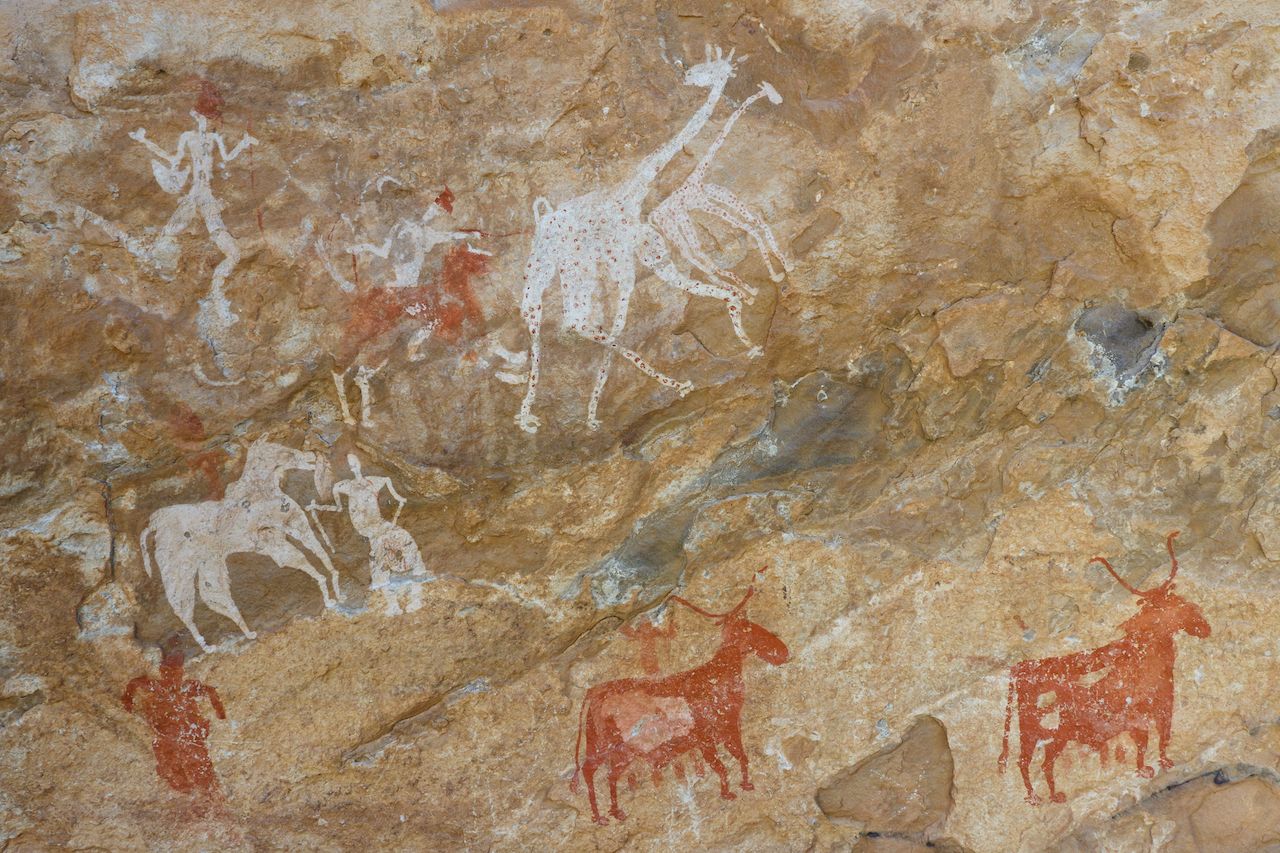 The southwest of Libya is a hotbed of rock art. First, there’s the UNESCO World Heritage site of Tadrart Acacus, where there are thousands of cave paintings, dating from 12,000 BC to 100 AD. Then, about 62 miles east of the magnificent Acacus Mountains, are the remains of an ancient crater with walls that bear some of Africa’s most intricate ancient rock art engraving examples. The art in the Murzuq crater is believed to be 10,000 years old and depict fascinating life-sized animals. Some of these animals are still around, like elephants, rhinos, and giraffes, but others, like the prehistoric bubalus horned buffalo, went extinct more than 5,000 years ago.