The guy next to me seems enamored with his effervesce. He’s dropping some high-dose vitamin C powder into a cup of water he requested from the flight attendant, and looks to be enjoying it like it was a rare, 25-year-old Scotch.

“I take this every flight,” he says to the no people who asked him. “That’s my secret. Hundred-thousand miles a year and I never get sick. I swear by this stuff.”

I asked him what he did for a living, and he was not, in fact, a dietitian or a medical professional. He was just a guy in a field that required a lot of travel, which got me wondering: Was there anything in that little fizzy cup that was proven to work better? Or are vitamin C supplements a whole lot of anecdotal evidence and placebo with a nice marketing package attached?

“Most folks believe that it’s useful to take vitamin C when preventing or fighting a cold,” says Kimberly Gomer, the director of nutrition at Pritikin Longevity Center + Spa in Miami. “This misinformation stems from the famous research from Linus Pauling who claimed years ago that large doses of vitamin C could prevent a cold. But that hasn’t been supported in the research.”

Never heard of Linus Pauling? He’s a chemist and the only person to win two unshared Nobel Prizes, but his lasting legacy is probably his assertions that vitamin C could not only eradicate the common cold, but can also help you live longer and prevent almost all diseases.

Unlike the work he won Nobel Prizes for, his vitamin C claims were largely anecdotal. But because they came from such a credible source, people came to believe vitamin C was a cure for the common cold. Hundreds of vitamin C products flooded the market, and despite mounds of evidence to the contrary, plenty of people like my airplane seatmate still seem to think it works.

She says “pretty much” because a 2013 study from the Cochrane Database of Systematic Reviews examined 29 different vitamin C trials, and found that ultra-active people like marathon runners, alpine skiers, and military special forces saw a 50 percent reduction in their risk of getting a cold when taking 200 milligrams of daily vitamin C.

But that same study found no benefit at all for people who weren’t burning upward of 10,000 calories a day. So that preflight supplement likely won’t do you much preventative good, even if you did knock out 30 good minutes on the elliptical.

Part of why ultra-active people might see a better benefit from vitamin C is because of how it works. Vitamin C is an antioxidant, which helps the body fight free radicals. These are very healthy and impressive-sounding terms that look sexy on a vitamin bottle, but what do they actually mean?

Technically speaking, free radicals are molecules that have an unpaired electron. These radicals are highly reactive, and can go after DNA, proteins, carbohydrates, and lipids in the human body. This, in turn, can lead to cell damage. When free radicals break in and steal electrons, they leave all kinds of damage to your body, from diseases to colds to genetic mutations. Free radicals are bad dudes, but instead of punishing them, vitamin C instead donates an electron to them. This way they are happy, and don’t go around pillaging electrons from healthy cells. Vitamin C isn’t so much fighting free radicals as it is acting as a charitable organization for disadvantaged atoms.

This act of helping free radicals gain electrons is why vitamin C is helpful for people who break up oxygen in large amounts — runners, skiers, secret agents — but not as much for couch surfers.

Vitamin C can reduce the time it takes to heal 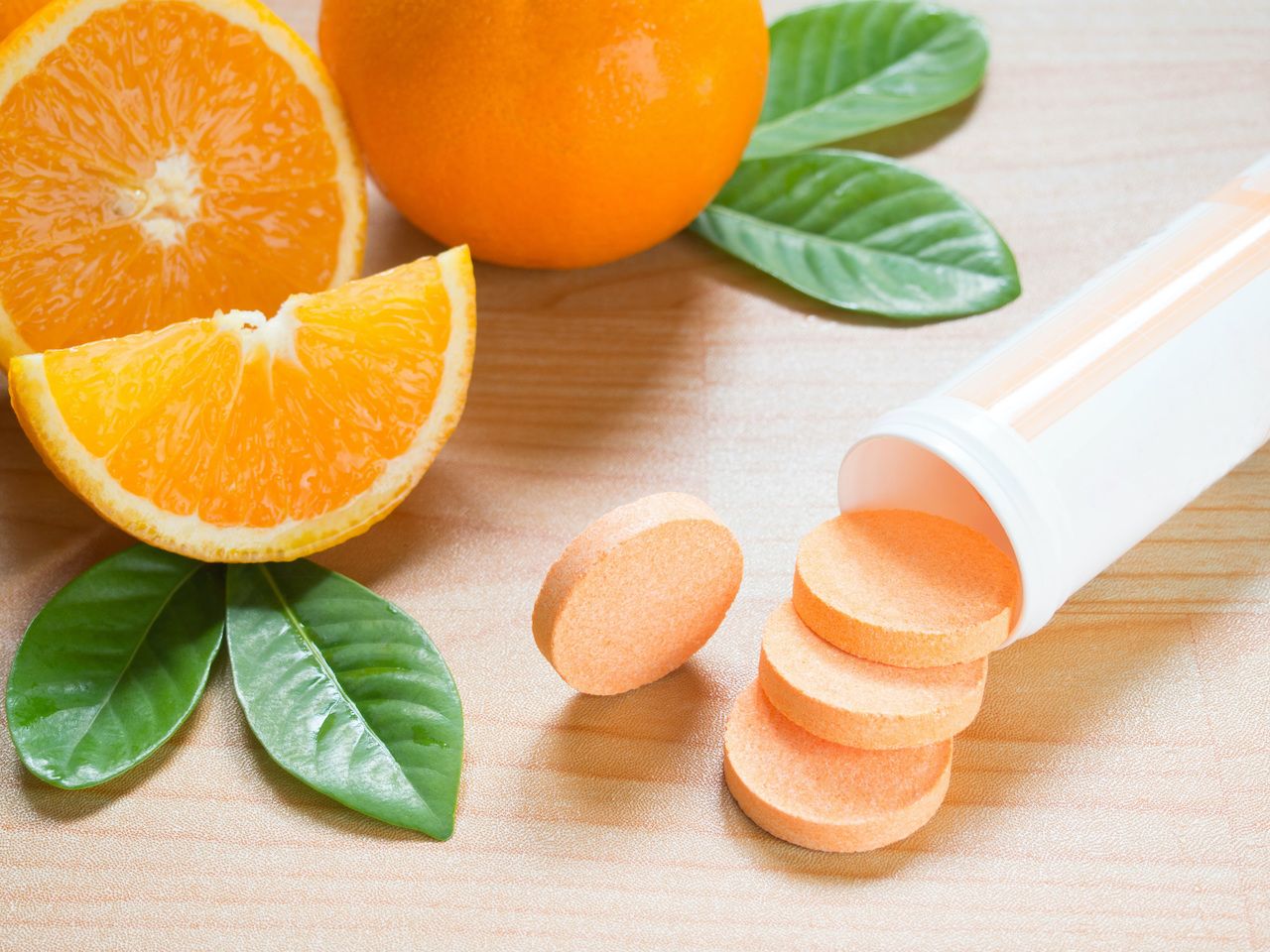 Because vitamin C helps protect healthy cells, it can still be useful in reducing the time you’re sick and alleviating your symptoms.

“We need lymphocytes, or T cells, and vitamin C helps with that,” says Marina Yuabova, assistant professor at City University of New York and founder of Integrated Wellness NY. “Vitamin C helps white blood cells work more efficiently by fighting damage from free radicals. Then it also helps in the production of collagen, and for people who don’t heal very well they can heal faster because of the collagen buildup.”

The data supports her, too. That same study that found vitamin C wasn’t too effective in preventing colds also found 200 milligrams a day reduces the duration of cold symptoms by 8 percent in adults, and by 14 percent in children.

Morris echoes the 200 milligram per day suggestion, since the water-soluble vitamin is mostly excreted in the urine past that point. Though one Finnish study found reductions of 10 to 20 percent in cold duration in doses between 3,000 to 8,000 milligrams per day. Yet doses that high can also cause diarrhea, nausea, and other things you don’t want to happen while you’re stuck on a plane.

But if you want those vitamin C supplements to do anything, Morris says the most important thing is to take them religiously.

“You can’t take it at the onset of a cold, and then have a reduced duration of symptoms,” she says. “It’s not like echinacea or high-dose garlic or elderberry. You need to be taking vitamin C regularly.”

And while supplements can be useful in doing that, Pritikin Longevity Center’s Gomer says your best bet is still probably getting a lot of it in your diet.

“It’s always better to get your Vitamin C from food, because along with the C comes other important nutrients such as potassium and fiber,” Gomer says. “Another reason to eat all those fruits and veggies. Taking a supplement is not the best way.”

So while the guy next to me may not have been doing any harm in taking his traditional packet of fizzy vitamins, they were at best only part of the reason he stayed so healthy. Vitamin C may have a lot of health benefits, but curing the common cold is not one of them. You may just get more benefits by making your preflight meal a fruit salad.

WellnessWhy You Get Dehydrated on a Flight and How To Prevent It
Tagged
Airports + Flying Wellness
What did you think of this story?
Meh
Good
Awesome