In October 2015, at the age of 18 and having traveled for two years around the world with some of the best surfers from the UK, I found myself working at a Starbuck’s in my home country of Switzerland, trying to build up my clientele. Then I saw a Facebook post about “Europe’s last wilderness.” The article described the Kungsleden Trail, a 270-mile trek that goes through Sweden’s Vindelfjällen, one of the largest nature reserves in Europe. Two weeks after I saw that I quit my job and left for Sweden.

It wasn’t until I had a stopover in Stockholm to gather information on the trek that I realized the hiking season ended a couple weeks prior. One of the reasons that drew me to it was the promise of photographing the Northern Lights, but on the plane someone from Kiruna told me he hadn’t seen them in the past month, and that I likely wouldn’t. Shortly after, another passenger woke me and pointed out the window. Not only was I witnessing the Northern Lights but I was practically flying through them. 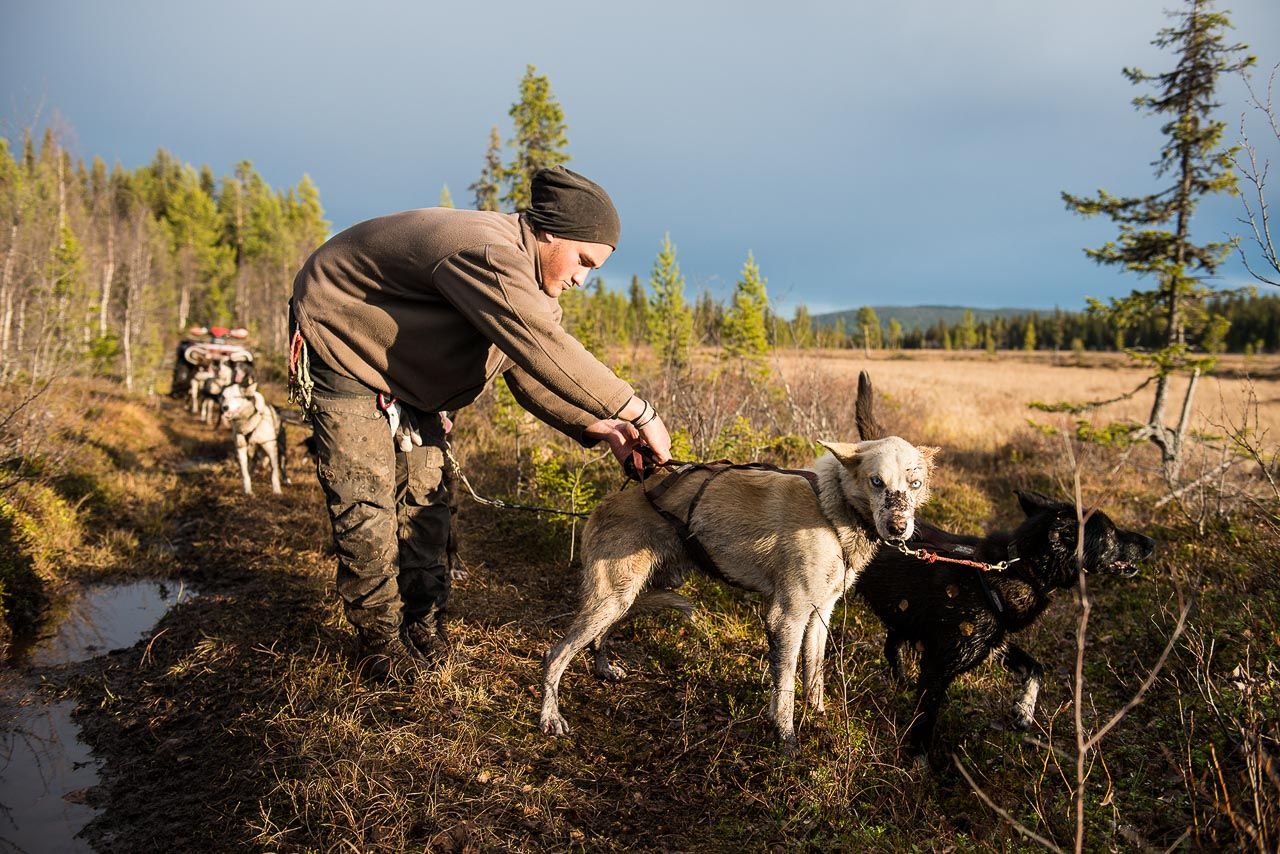 A dog trainer’s day starts before the sun rises and ends when all the work is done; this is usually anything between 10-16 hours. Pay is average and free time is kept to a minimum.

A tightly formed bond between dog and trainer is needed for each and every one of the 175 dogs kept at the kennel. For training purposes, after the long summer downtime, the dogs have to be taken for a 5-10 km run. This number ramps up to mid-season, where a pack of 5, 7, or 9 dogs can run up to 40km. 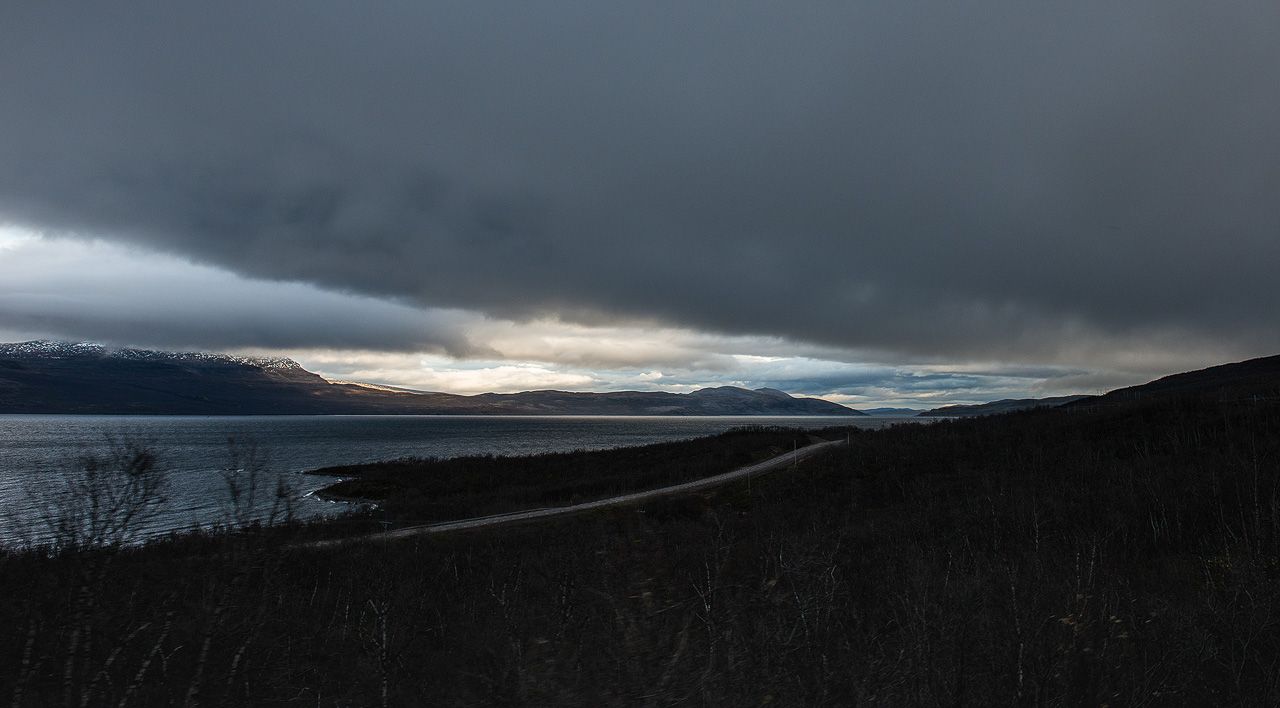 The train journey of almost 100km from Kiruna to Abisko makes its way through the breathtaking Nordic landscape with lakes, birch trees, and snow-capped mountains in the distance, and only a scattering of houses to remind you of the busy streets you left behind. 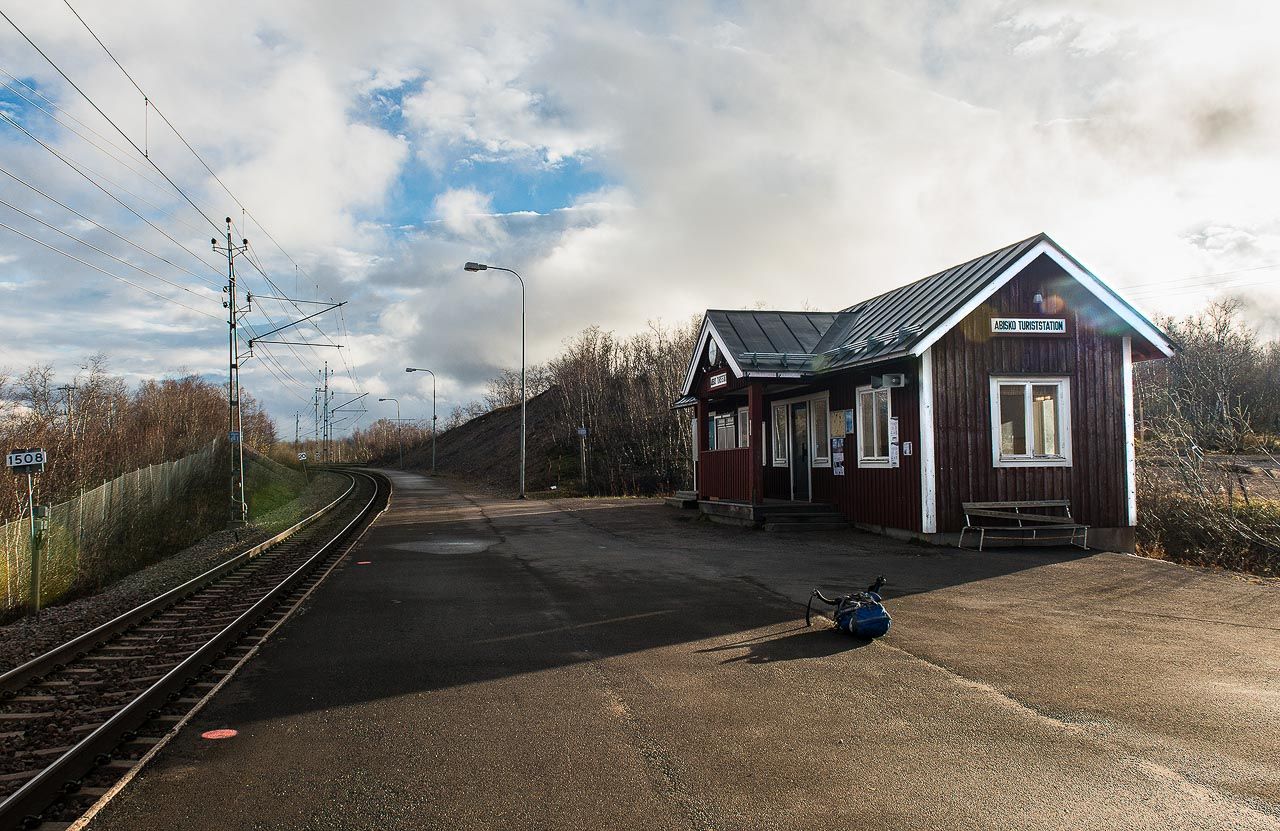 “Train station” is an exaggeration for the deserted wooden hut where I was dropped off. A short wave from the conductor was all the advice he had to give and so I buckled up in the quest to lose myself in this wilderness. The term “offseason” keeps tourists away leaving you with only your mind to talk to and the howling wind scraping past trees to listen to. 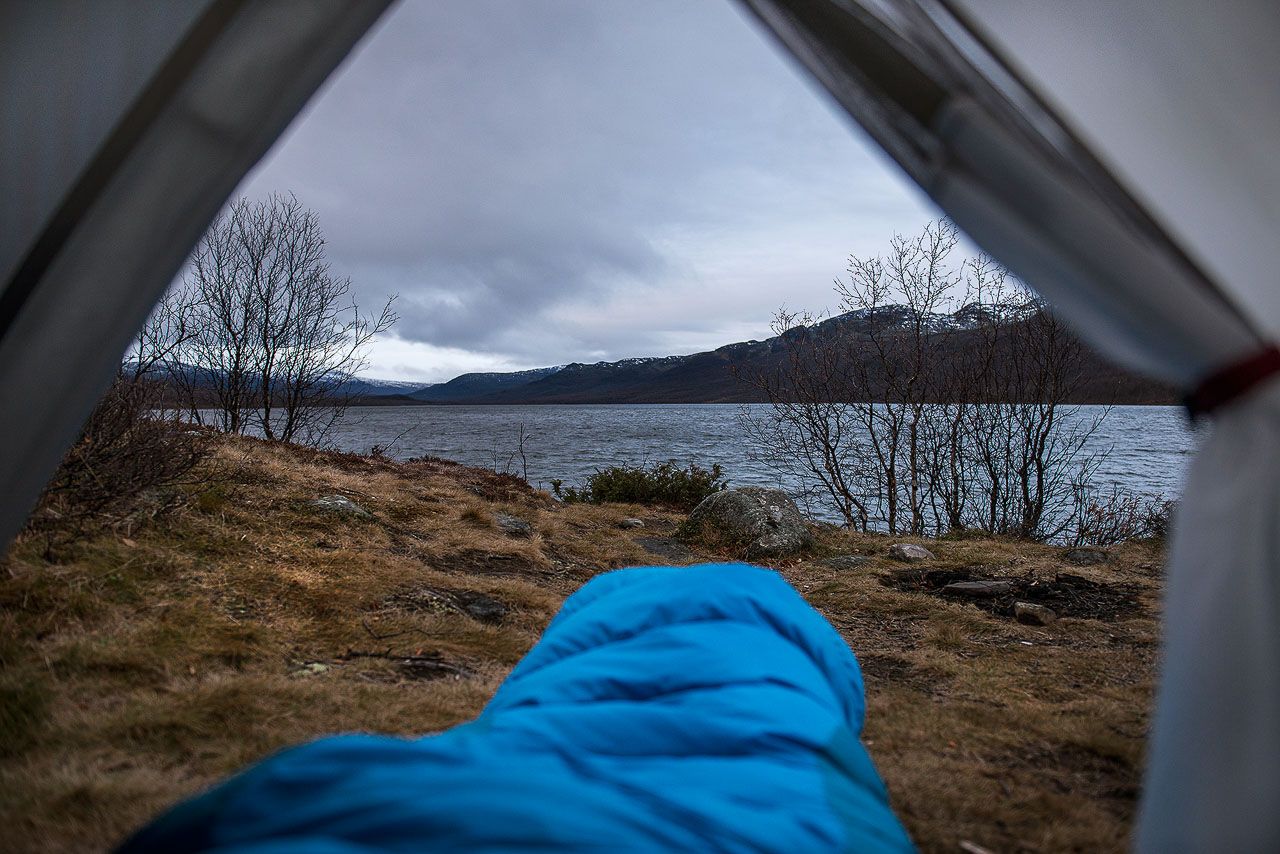 Abiskojaure was where I first set up my tent, in the hope of finding the northern lights mirrored in the lake. Instead, high winds and clouds with additional rain were on the menu.

The night was long, with only the faint tease of green light shimmering through the clouds. 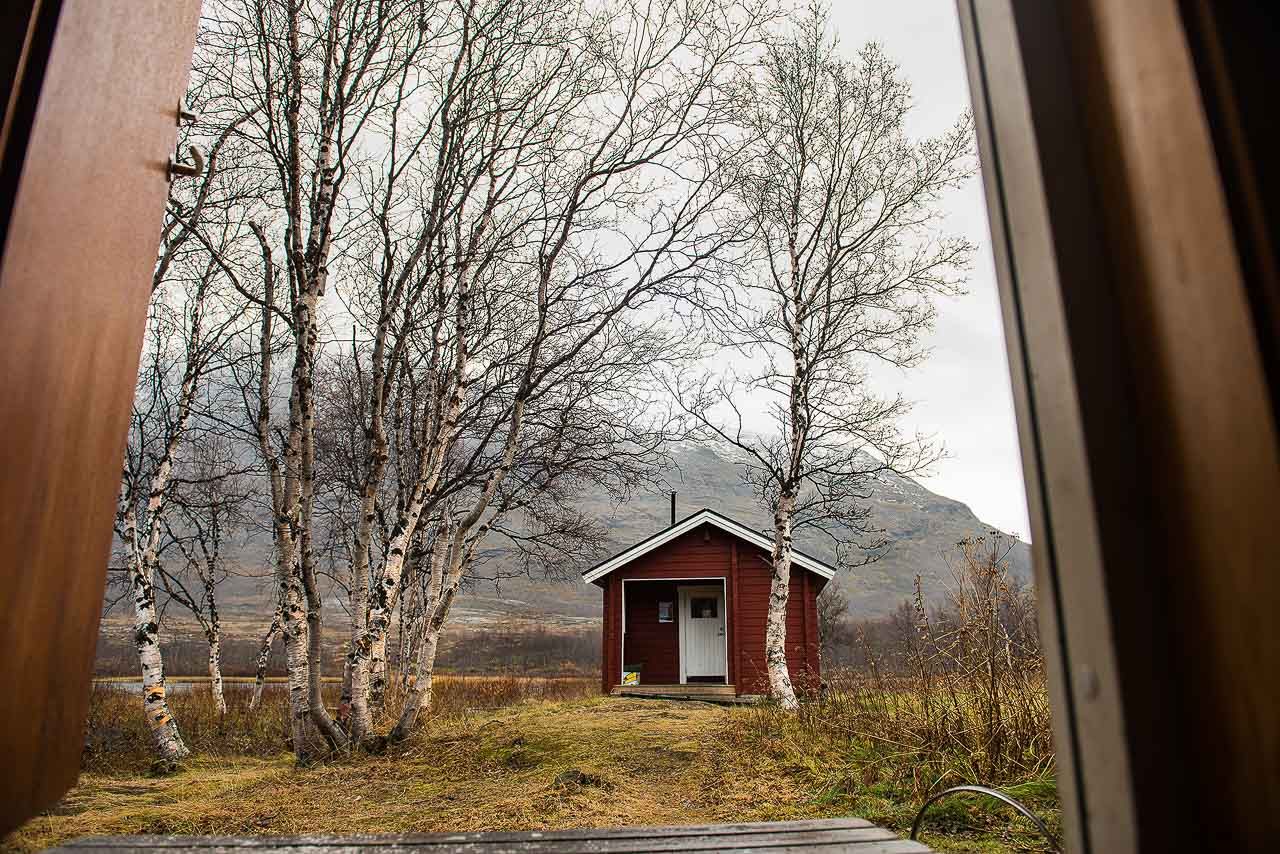 Campsites are every 10-25km apart. These are small wooden huts, some equipped with a functioning kitchen, bunk beds and a log burner. Others serve as a shop or toilets. According to locals, these huts are usually packed with tourists wanting to experience the wild countryside Sweden has to offer. At this time of the year, however, apart from the odd toilet or emergency shelter the huts are locked up and peace is left to the ones exploring on their own. 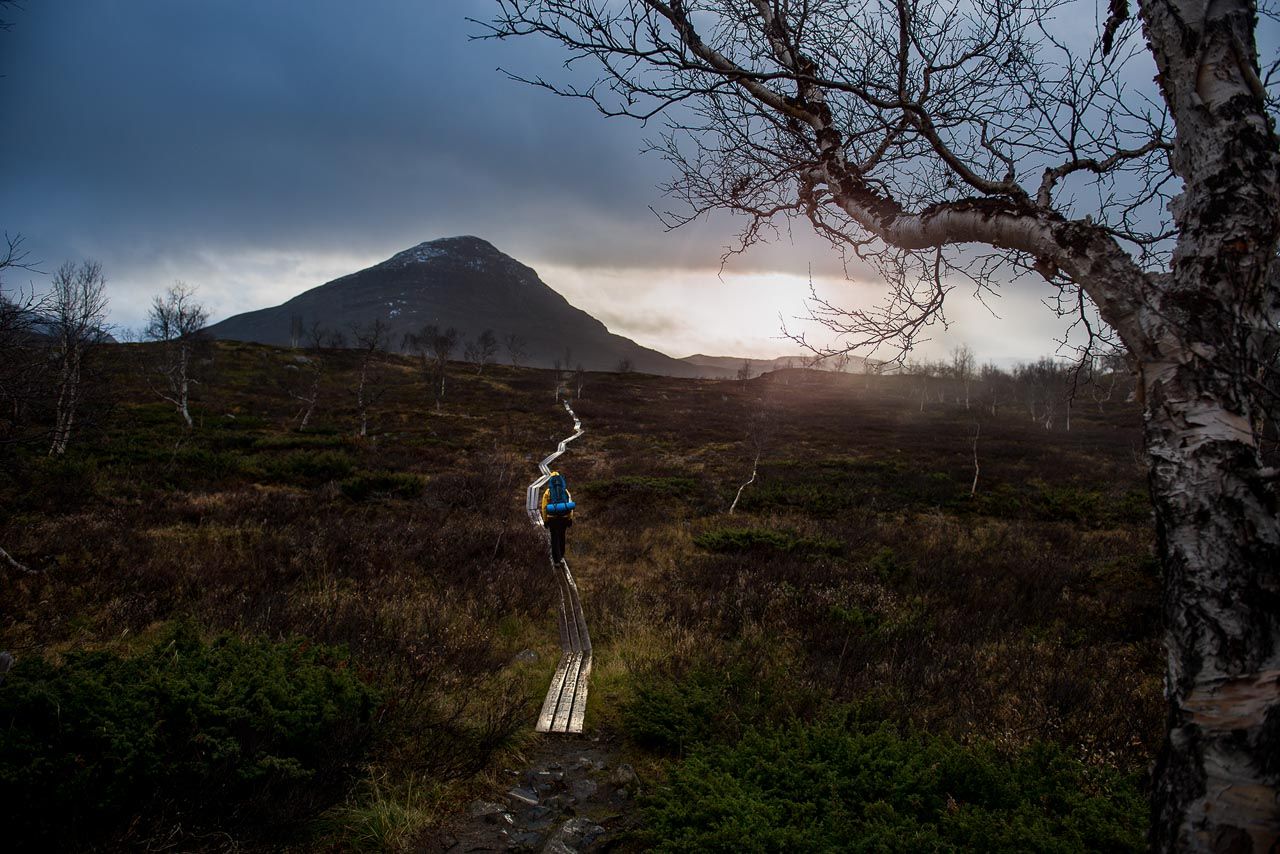 Three wooden planks saved my feet from sinking trough the saturated ground, overlooking the glistening dry grass stretching past the short stumpy birch trees, down the valley. It was a very surreal experience. Spending October so far north means you get the “golden hour light” all day long as the sun never properly rises above the horizon. Unlike in winter where you spend most of your days in gloom, autumn still offers 7-11 hours of sunlight. 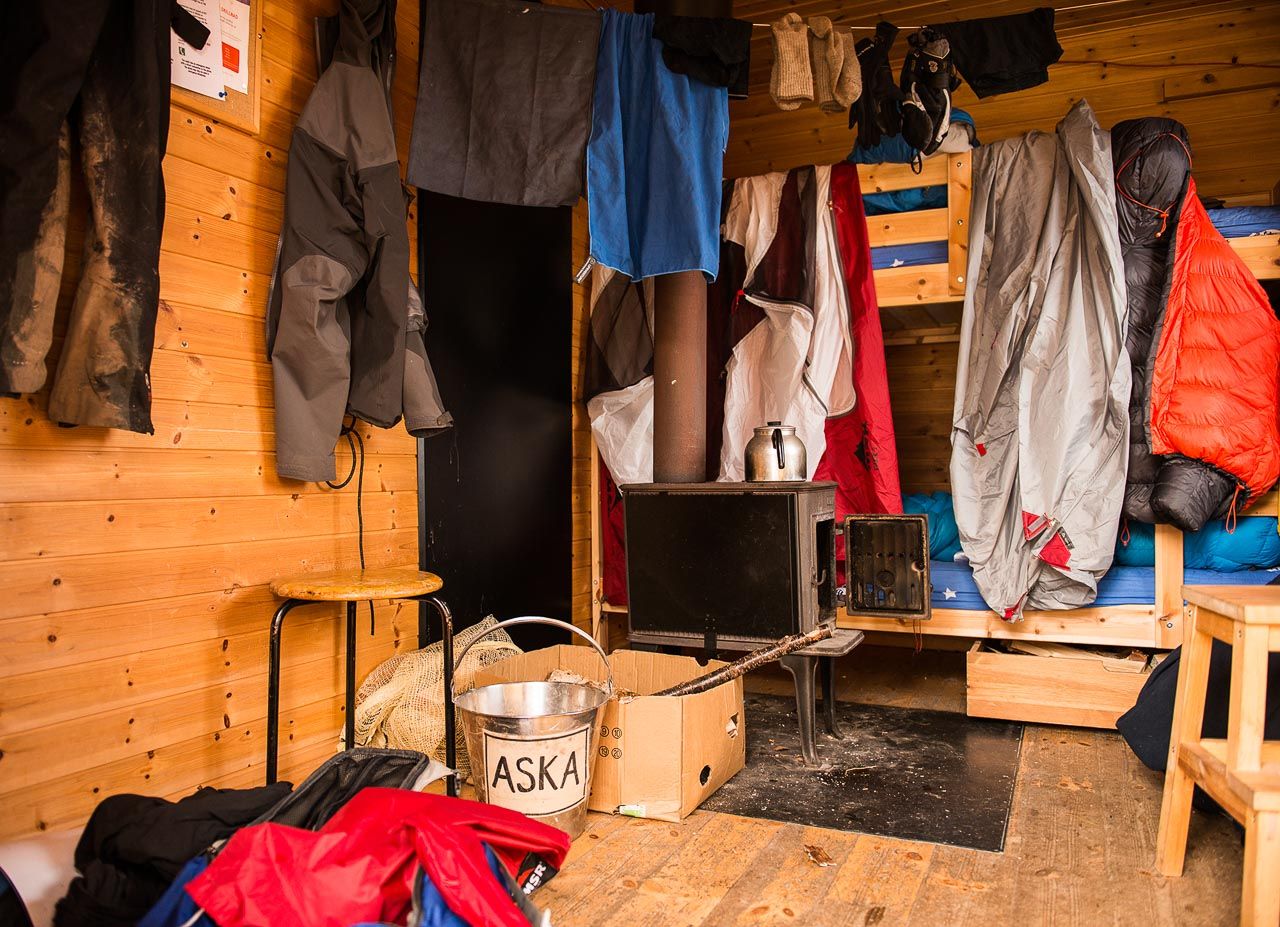 I heard from locals that every hut with a bed to offer was locked up for the season. This crushed my hopes of finding a warm cosy home to replace my wet tent. Still I tried from time to time, sampling every locked door I got my hands on. To my surprise, one opened. The emergency shelter was fitted with a bunkbed, wood burner, and a small sink. Perfect for drying clothes, eating a warm meal, and stretching out on some foam. 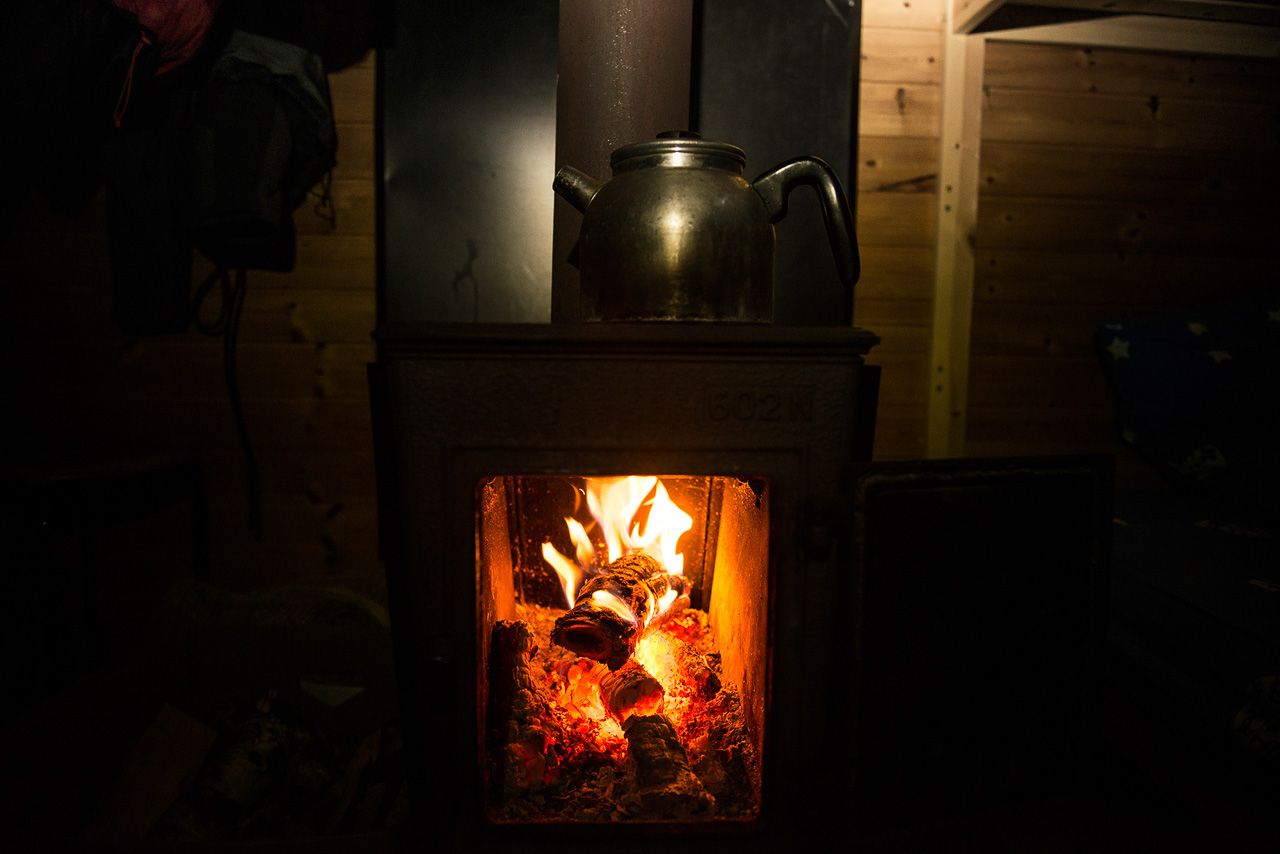 With the weather playing along my hopes for the sky to light up were up once again. Cooking, cleaning, and drying my soaking wet clothes took up the rest of the day. With every muscle relaxing in the warmth of the fire and my thoughts taken away by the crackling of the wood slowly burning away, the picture I had sought after for weeks was long forgotten. As the fire slowly died, the cold started creeping back into the room, which meant I was forced to head back out into the freezing night to fetch some wood. 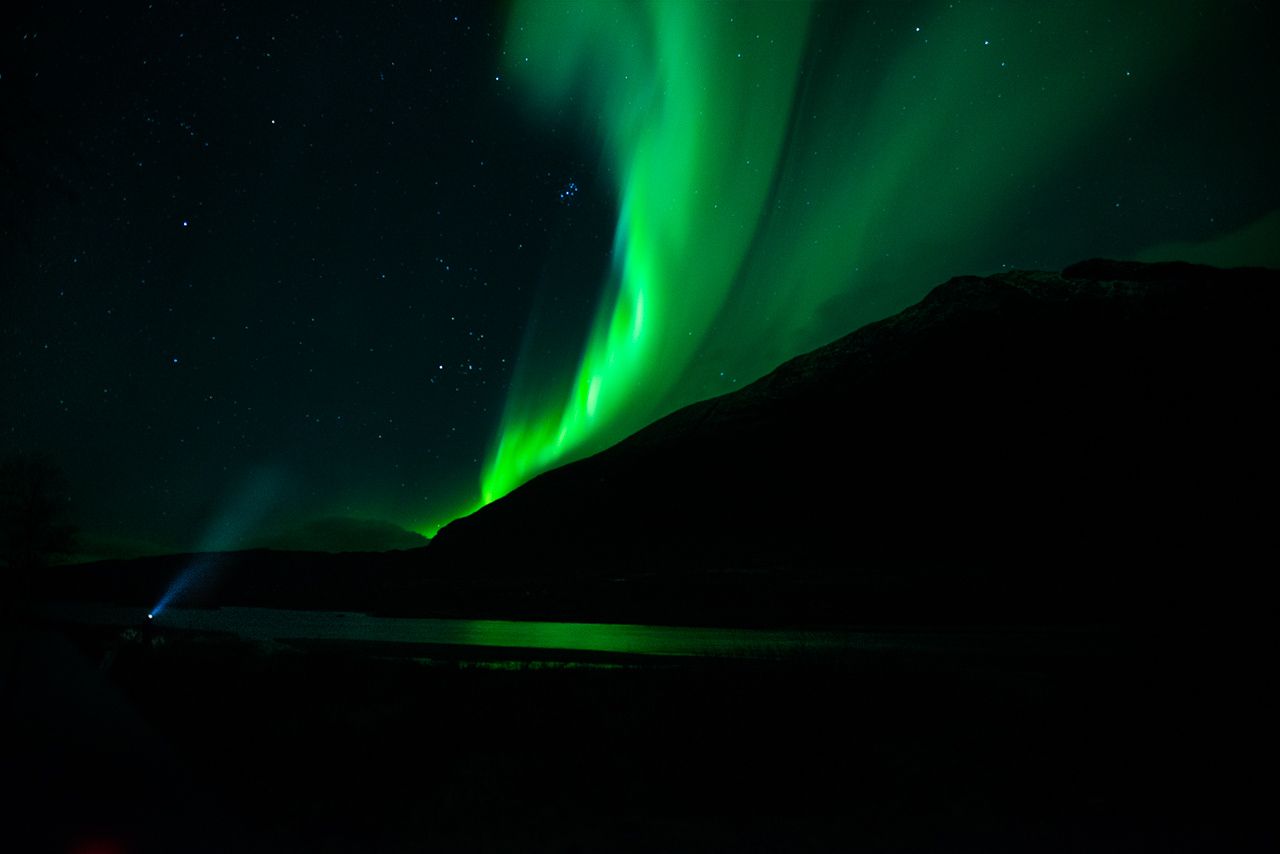 Focused on the flickering spot of light shining from my torch I almost missed the faint green smudge in the sky. Fickle as the northern lights are, I immediately scrambled back to the hut to gather my camera gear in the hopes of capturing the northern lights for the first time. Saving weight meant leaving my tripod at home; I was then forced to use a fence pole along with the only object in my pocket: my passport. Combined they worked as a functional tripod. 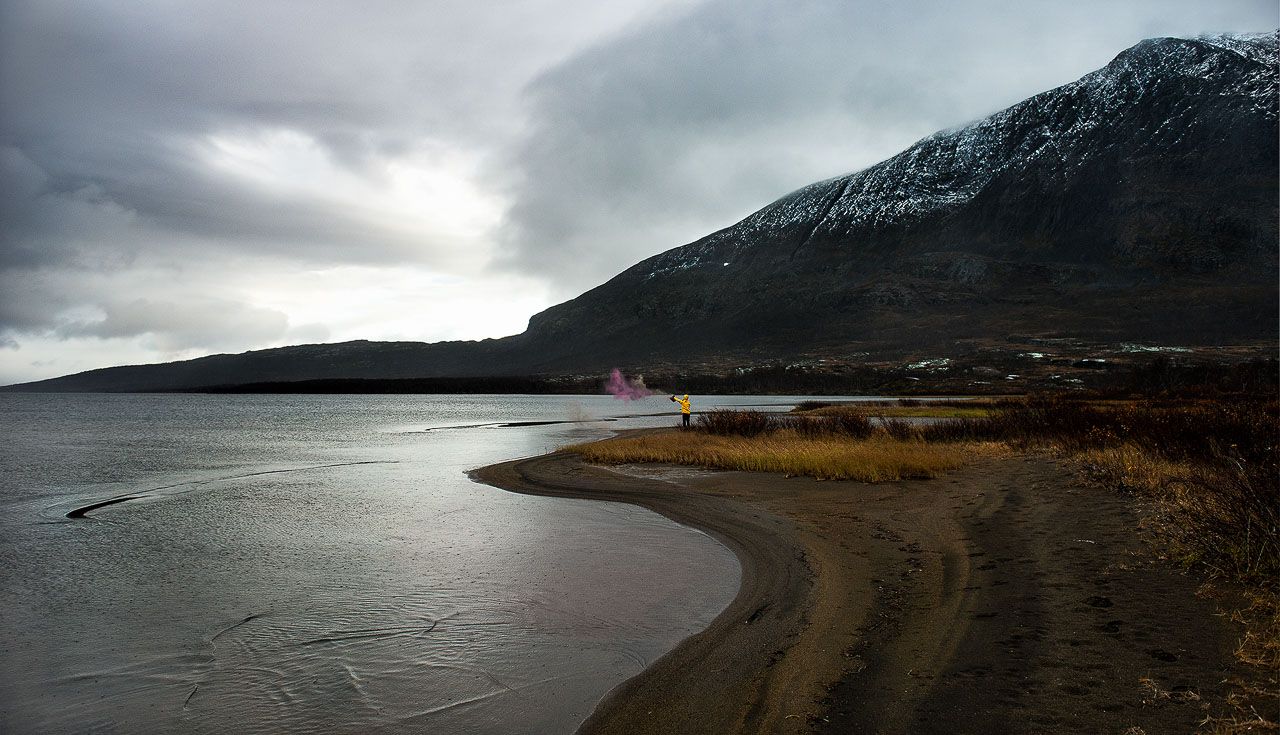 With the cell towers no longer reaching my phone there was no way of telling the weather. A 30km hike over a mountain pass stood between me and my next safe camping spot. Before starting my adventure in Kiruna, locals warned me of uncertain weather patterns and that 30cm of snow in the hills was not uncommon. 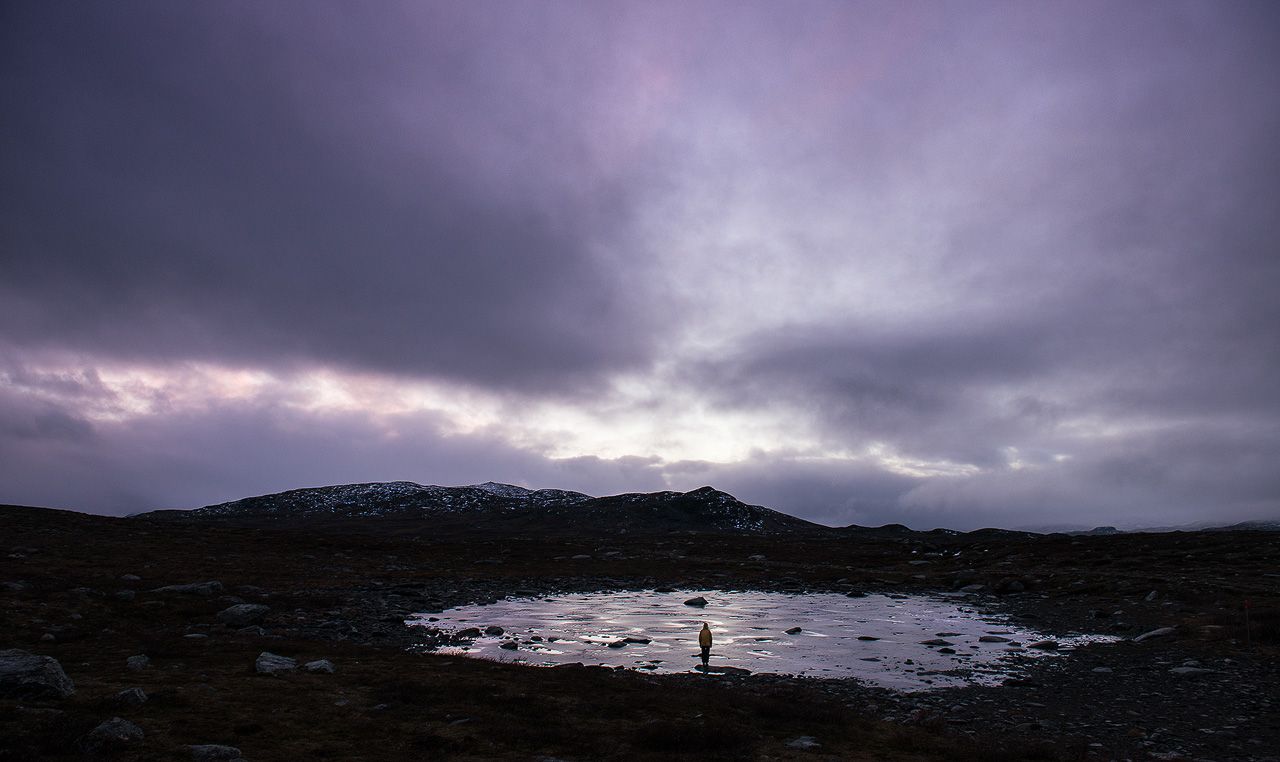 The walk slowly turned from the mellow wooden planks to steep grooves carved into the brittle sandstone. Crossing over wild rivers and streams my feet took me on to what felt like the top of the world. I was greeted by a hazy sunset overlooking a frozen mountain lake. 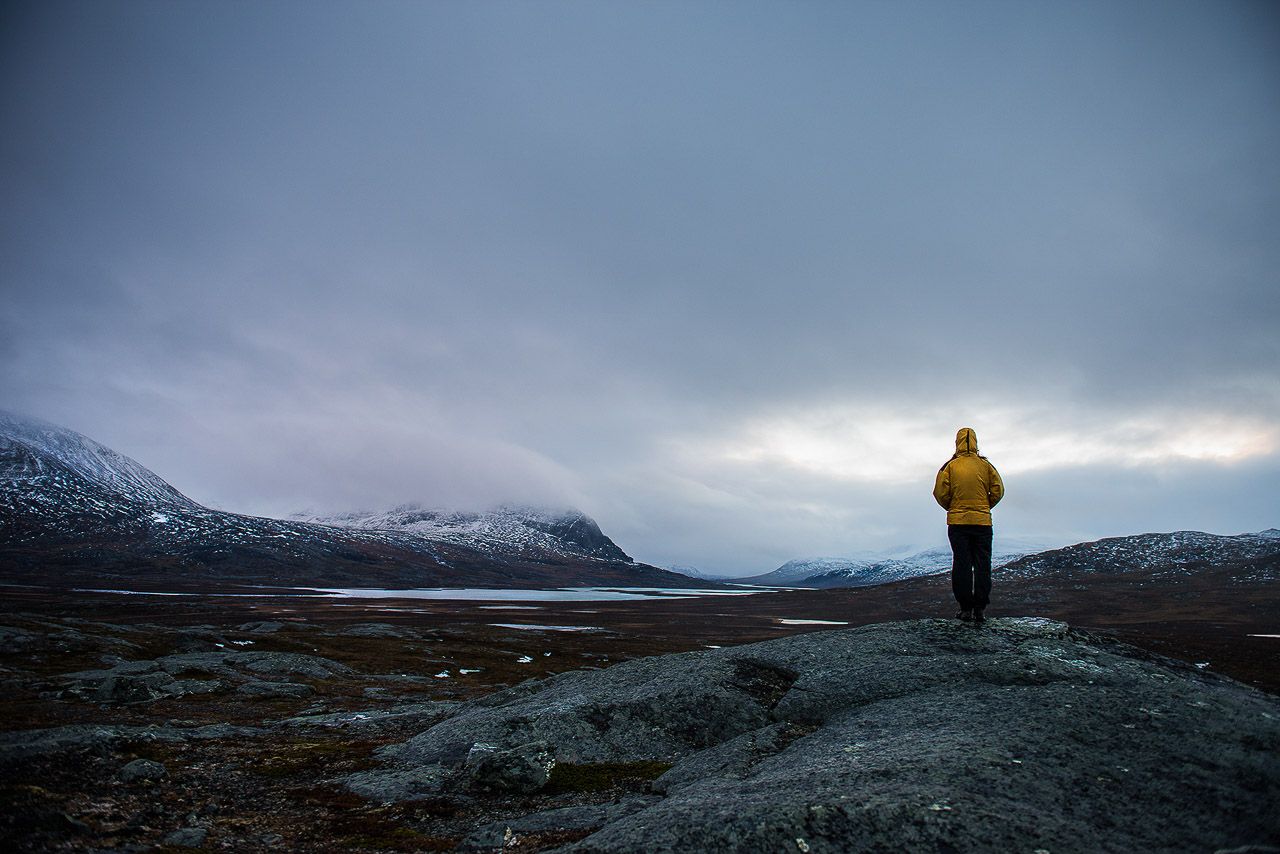 From there I could look into the valley where ice had long stopped plants and water from moving. With no emails needing attention, no calls wanting an answer, and no people to distract me from the pure beauty of this planet, I got the time to fully appreciate my surroundings: the steep valleys, the fresh air coming from the mountaintops, and the frozen ground crackling under my feet. I felt as though I had succeeded in finding Europe’s last wilderness.

Tagged
Hiking Sweden
What did you think of this story?
Meh
Good
Awesome

This amazing island in Sweden is on sale for just $1.4 million

What to pack for an epic trekking adventure in Latin America

The first Europe to Asia thru-hike is coming, and you can help build it

These canvas pants are my new indispensable piece of travel clothing