“You ready? I’m going to try to get us to hit that hole head on so we get the biggest ride,” Zia says with a laugh from the back of our two-person, inflatable kayak as she steers us towards roller coaster waves on Cataract Canyon in Utah. We are on the last stretch of rapids here, on day five of a six-day, nearly 100-mile wilderness river trip through Canyonlands National Park.

“I’ll try to remember to keep paddling, you try not to flip us,” I respond from the front. I’m the motor, she’s in charge of steering.

“I think it would be kinda fun to flip,” Zia retorts. Today is her nineteenth birthday, and she is in training to be a guide with OARS, the whitewater rafting company that is leading this once-in-a-lifetime backcountry trip.

Zia and I don’t end up flipping, but we hit the hole head-on and a few more in quick succession after it. It’s enough to get my adrenaline pumping, and my dopamine flowing.

It took us three days of floating and paddling on flat water to reach Cataract Canyon and its 14 miles of rapids. At high water, these are some of the biggest, baddest rapids in the country. Even in low water, which is what I’m rafting, the trip is still a wild adventure.

Planning your own trip to Cataract Canyon 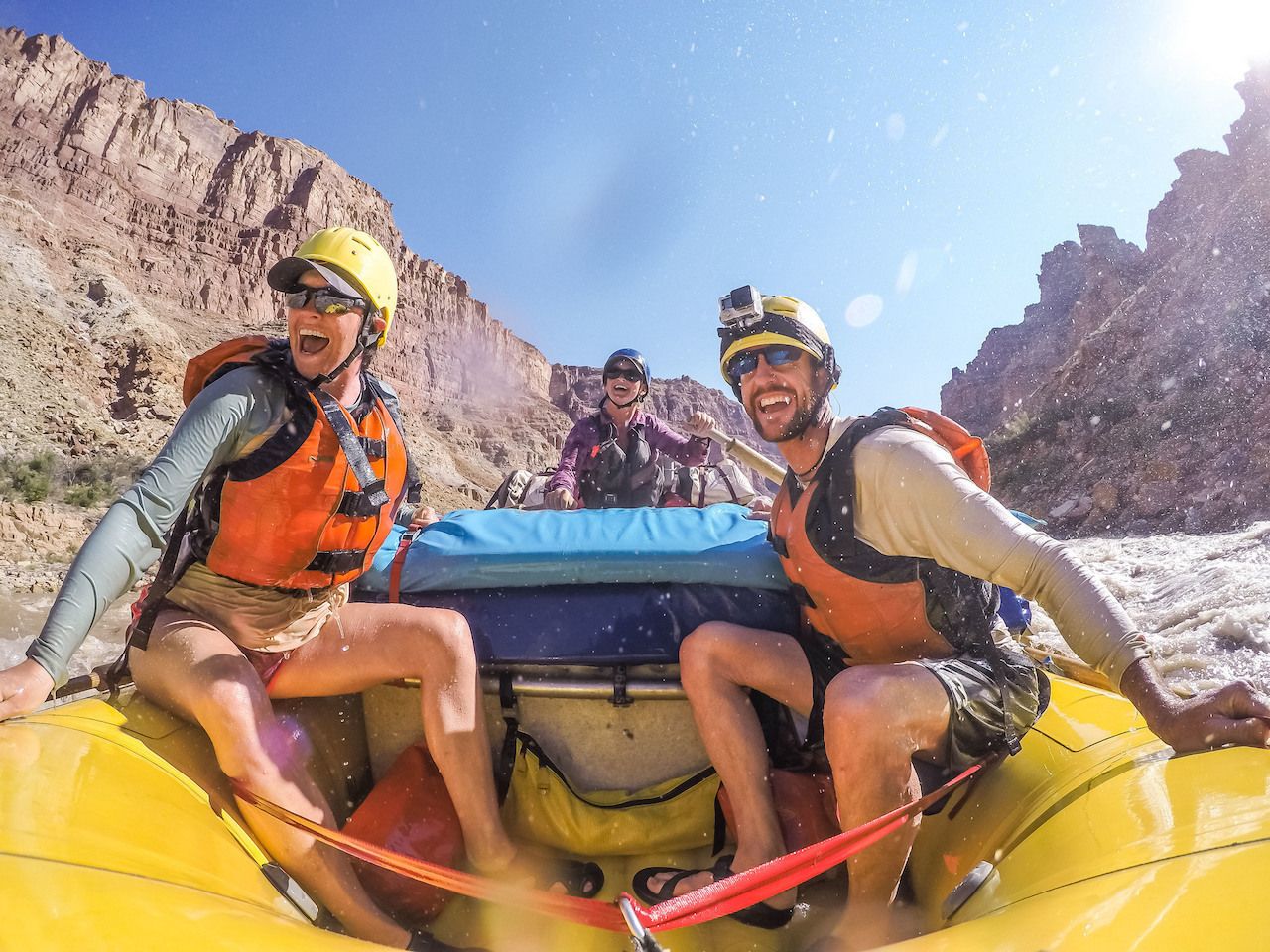 You can run Cataract Canyon in as little as three days, but that requires motoring most of the flat stretches. It doesn’t give you time to take in the deeply crimson rock walls, buttes, and towers that comprise Canyonlands National Park — scenery that can only be witnessed from the river.

Instead, we recommend a six-day journey. This gives you enough time to unwind, to hike up side canyons towards sites of ancient petroglyphs, and to get into the vibe of sleeping under the stars and spending the days paddling leisurely on a SUP board or swimming lazily down the Colorado River. It’s an ideal way to lose track of time and make new friends.

Numerous outfitters run Cataract Canyon rafting trips, and choosing the right one, especially if you opt for a longer trip, is important. I went with OARS based on rave reviews from friends, who said the OARS guides were not just excellent at running boats through walls of whitewater, but also at cooking and entertaining. OARS is also dedicated to responsible travel and stewardship of the rivers they run.

I was not disappointed by my choice. 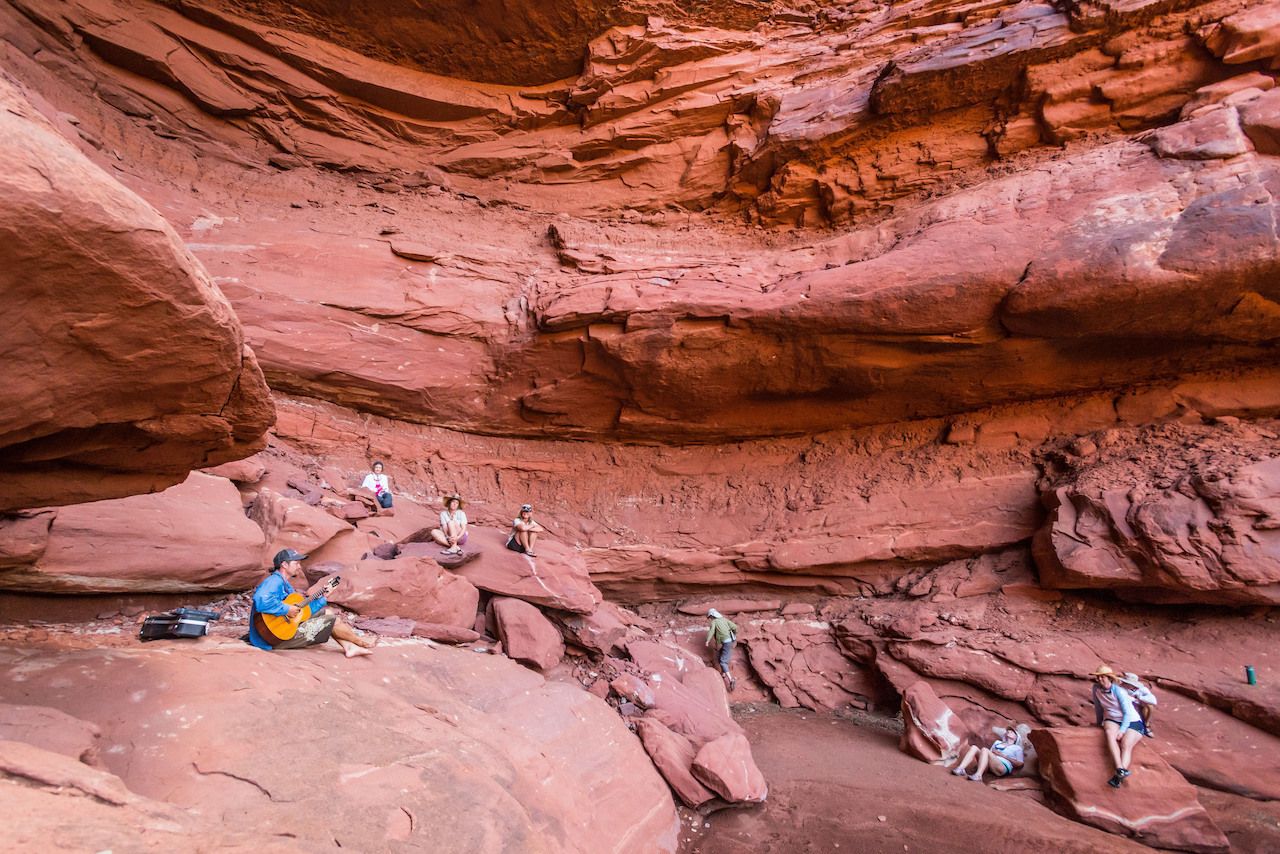 Considering the temperatures soared above 100 degrees for the first half of the trip, it was beyond impressive that on the last night on the river they were grilling steaks and had a pitcher of ice for cocktails. The food throughout the trip was high-quality, varied and also highly specialized for every kind of diet.

Beyond cooking, the guides had more tricks up their sleeves. Dave was a singer who also played guitar and he put on almost nightly concerts. He even carried his guitar up a slot canyon hike to play for us when we reached a shady alcove. Having listened to live music at the Red Rocks amphitheater near my Denver home, I found these canyon acoustics equally impressive.

Nights are spent camping. Where you’ll camp changes with water level and the campsites are first-come, first-served. Each night after arriving you’ll help the guides unload the boats and pitch your tent. OARs carries super-comfy air and foam sleeping mats known as paco pads. During the day they are turned into couch seating on some of the boats, but at night each guest has one to sleep on. Pair it with your own air mattress for the ultimate in camping comfort. (You’ll receive a what-to-pack guide before your trip).

Guides will also set up “the groover,” which is their portable river toilet system. Pooping in the wilderness is a lot more posh than one would expect; and the river is kept free of solid human waste. You’ll have a proper toilet seat on top of an ammunition box. Guides go to great lengths to ensure not only privacy but also excellent views: The scene from our groover set facing the confluence of the Green and Colorado Rivers was better than nearly any hotel toilet I’ve sat on.

Best time to go, depending on the thrill you want 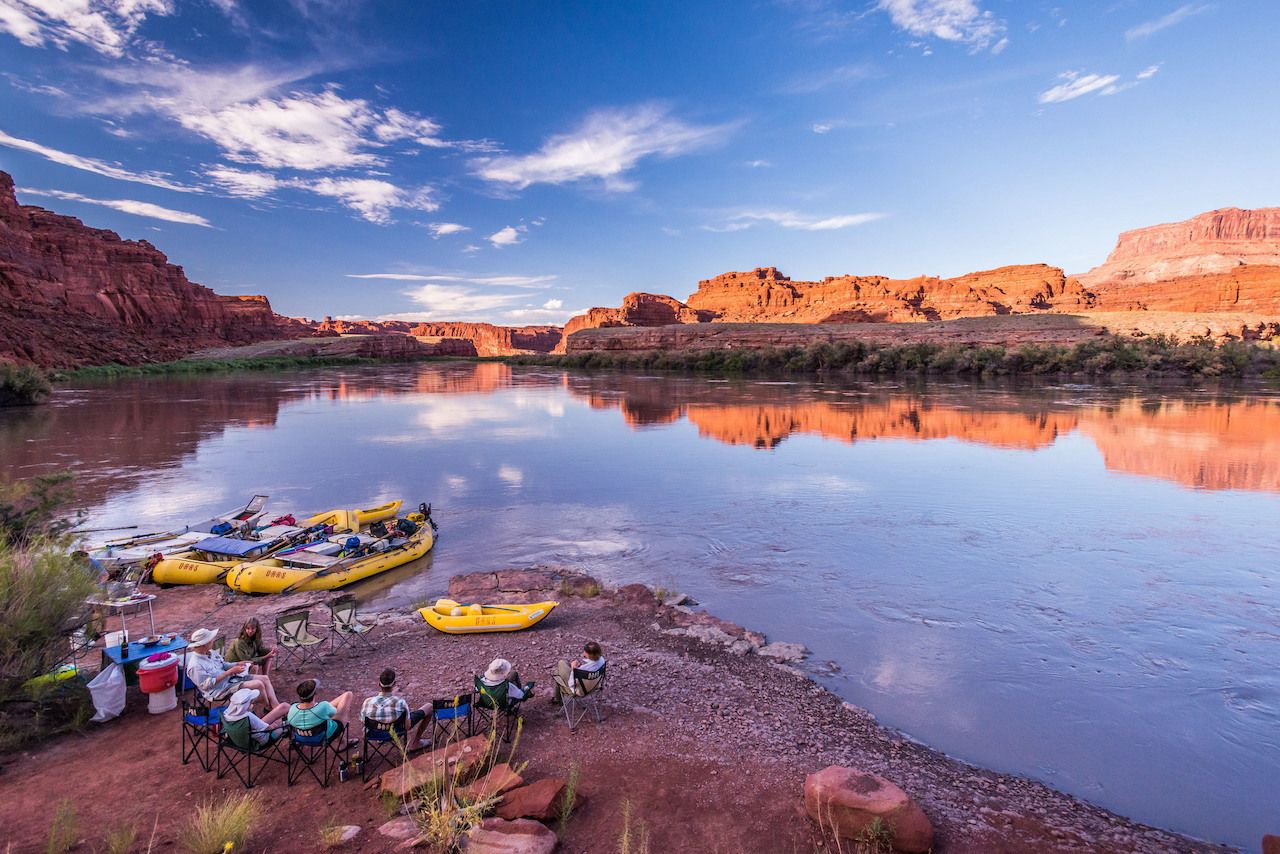 Although it is impossible to predict exactly how high the river level will be at the time you book your trip, the earlier in the season you go, the greater the opportunity for monster waves and world-record-making rapids. When running above 25,000 cubic feet per second, Cataract Canyon’s rapids are considered some of the most intense commercially run Class V whitewater in the world.

The river drops 30 feet in less than a mile at one point, and on rapids like Little Niagara and Satan’s Gut the waves can be up to 30-feet high. Cataract’s signature rapids are The Big Drops. These are three distinct drops that at max flow become one giant wall of water that feels like riding a rollercoaster on speed.

High water doesn’t happen every year. It requires good snowfall in Colorado’s Rocky Mountains and Wyoming’s Wind River Range, but when the Colorado River is raging you will not be paddling yourself. You’ll ride the rapids in a boat oared by your guide or a motorized craft known as a J-rig and likely be holding on for dear life.

For the highest water levels you’ll want to try to book in May or early June. Although seasons can last longer, when I hit the river in late June this year, it had already dropped to almost its lowest flow level, around 5,000 cubic feet per second.

Running Cataract in high water is a crazy rush for sure, but lower river levels bring their own fun. With less flow, you have more options for how to ride the rapids, including the inflatable kayak I took. A paddle boat, where you row as a team with a guide, is also brought on lower water trips. This is a great way to add a little more thrill without as much risk of swimming through some big waves. OARS makes an effort to swap out crafts as much as possible, so even in a group of 19 we didn’t end up fighting over which boat to be in.

What to expect on your trip of a lifetime 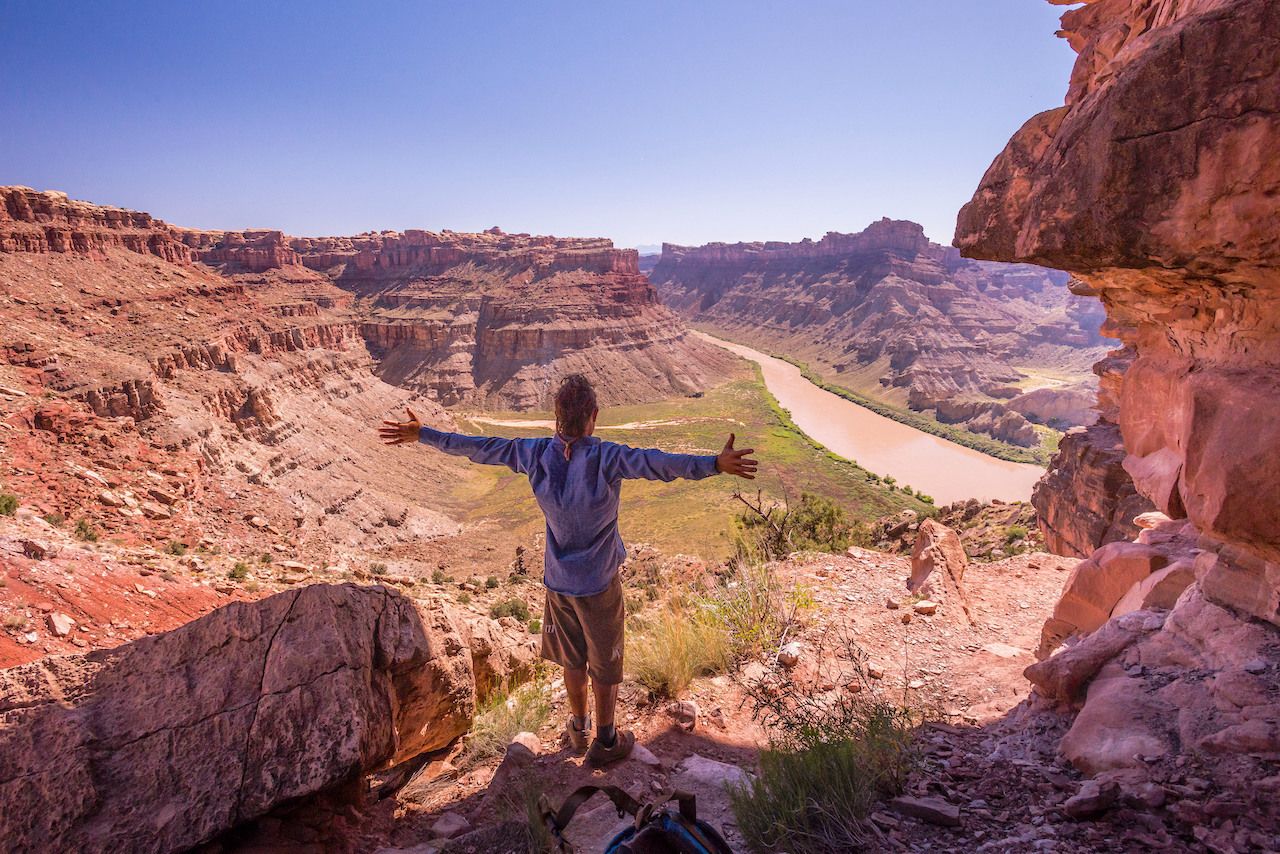 The night before your Cataract Canyon rafting trip departs you’ll gather at the OARS warehouse in Moab for a pre-trip briefing. This is when you’ll meet the rest of the group and learn about what types of watercraft will be floating downstream with you. You’ll also be told what time to return in the morning (usually around 7:00 AM) and given three dry bags to pack your gear into.

It’s about an hour drive from the warehouse to the put-in at Potash and, after a quick safety briefing, you’ll get on the river. The first day everything moves slowly. The river is languid, the sun usually bright and you’ll heat up quickly. It takes a little adjusting to the leisurely pace of life and to figuring out the vibe of your group. By the time you reach camp that evening you’ll notice exactly how relaxed you are feeling and how weirdly freeing it is to not be able to check your email or social media.

For the first three days you’ll float southwest for 47 miles — although what time you hit the rapids and how fast you go through them depends on water levels — before reaching the confluence with the Green River. Here you enter the 46-mile long Cataract Canyon, which has around 14 miles of whitewater. As water levels continue to drop in Lake Powell due to drought, more rapids emerge. After the final rapid, it’s back to flat water until the take out at Hite Point at the northern end of Lake Powell.

But don’t expect the adventure to be over quite yet. The last thrill ride awaits in getting back to Moab. Instead of driving 3.5 hours, you’ll hop in a small plane for a 30-minute scenic flight back. The pilots fly you up along the river so you can see the route you took from above including all Canyonland National Park’s different districts. As someone who doesn’t like to fly, I surprised myself by enjoying this flight. Seeing just how far we’d traveled on the rafts was a pretty momentous experience that left me a little teary eyed.

Back at the warehouse in Moab, it’s time to say good-bye. After spending six days with a group of strangers who are forced to interact with one another, you quickly become a river family with your own set of inside jokes and memories no one else will experience in quite the same way. In a world where we are so often interacting remotely, making IRL friends and having meaningful conversations is an experience I will treasure for years to come.

SustainabilityRaft Idaho’s Salmon River and Actually Help the Salmon in Their Fight To Survive.
Tagged
National Parks Utah, United States
What did you think of this story?
Meh
Good
Awesome