In Rajasthan, in northwestern India, camels are not mere desert dwellers: They’ve long been a source of income, transportation, security, status, and even companionship for Rajasthanis, who in turn have a near-reverence for the mammal. Every January in the city of Bikaner, this respect and admiration is channeled into a multi-day camel fest filled with parades, races, beauty pageants, fireworks, and much more revelery. A tribute to Rajasthan’s camels, the annual Bikaner Camel Festival is also a big draw for tourists. This is everything you need to know about it, from where to join in the festivities to what to expect when you do.

Visiting the land of camels 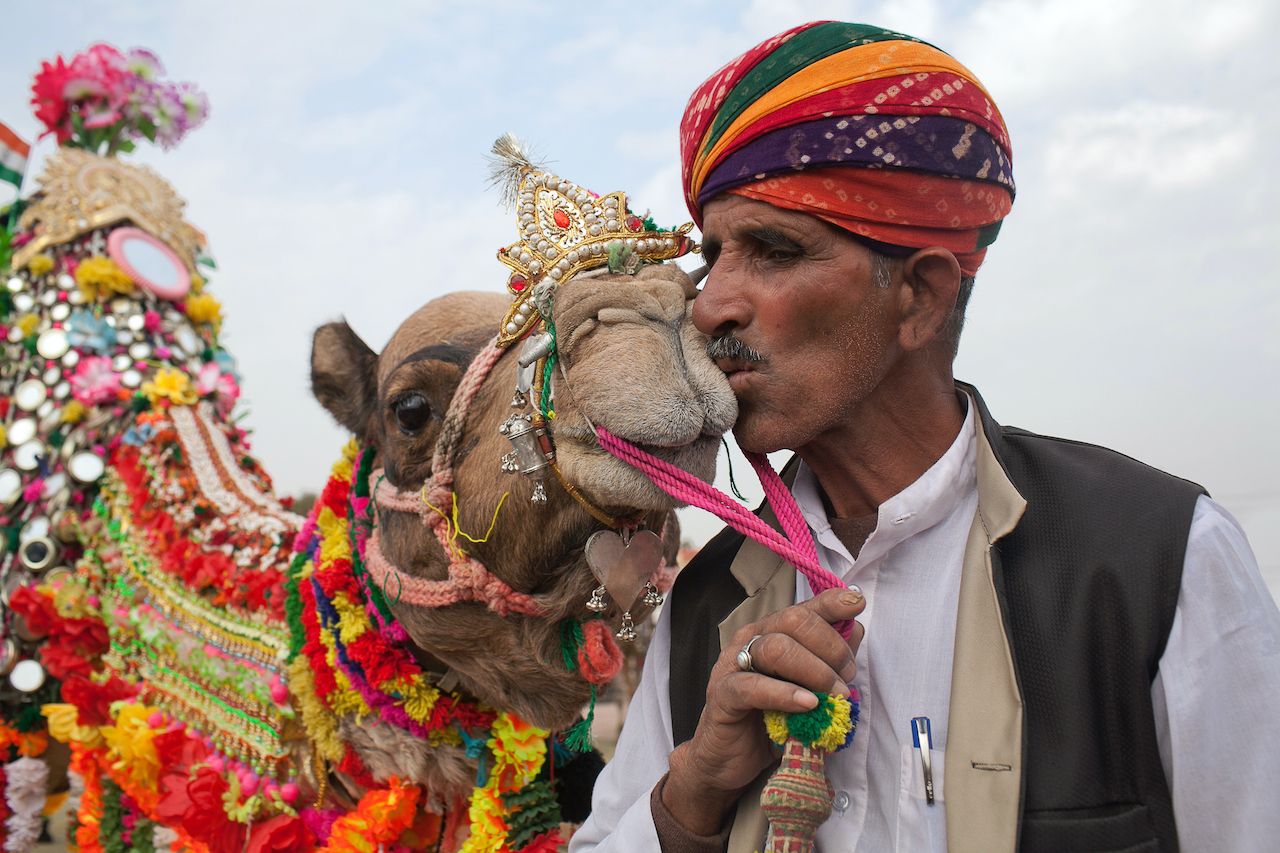 Bikaner sits in the middle of the Thar Desert, or Great Indian Desert, a few hours from the Pakistan border. It’s known throughout the region as the “land of camels.” Historically, Bikaner was the biggest camel breeding center in Rajasthan, and today, its National Research Center on Camel conducts important studies on everything from camel genetics and ailments to fertility and dairy potential. Visitors also come to interact with the camels there. 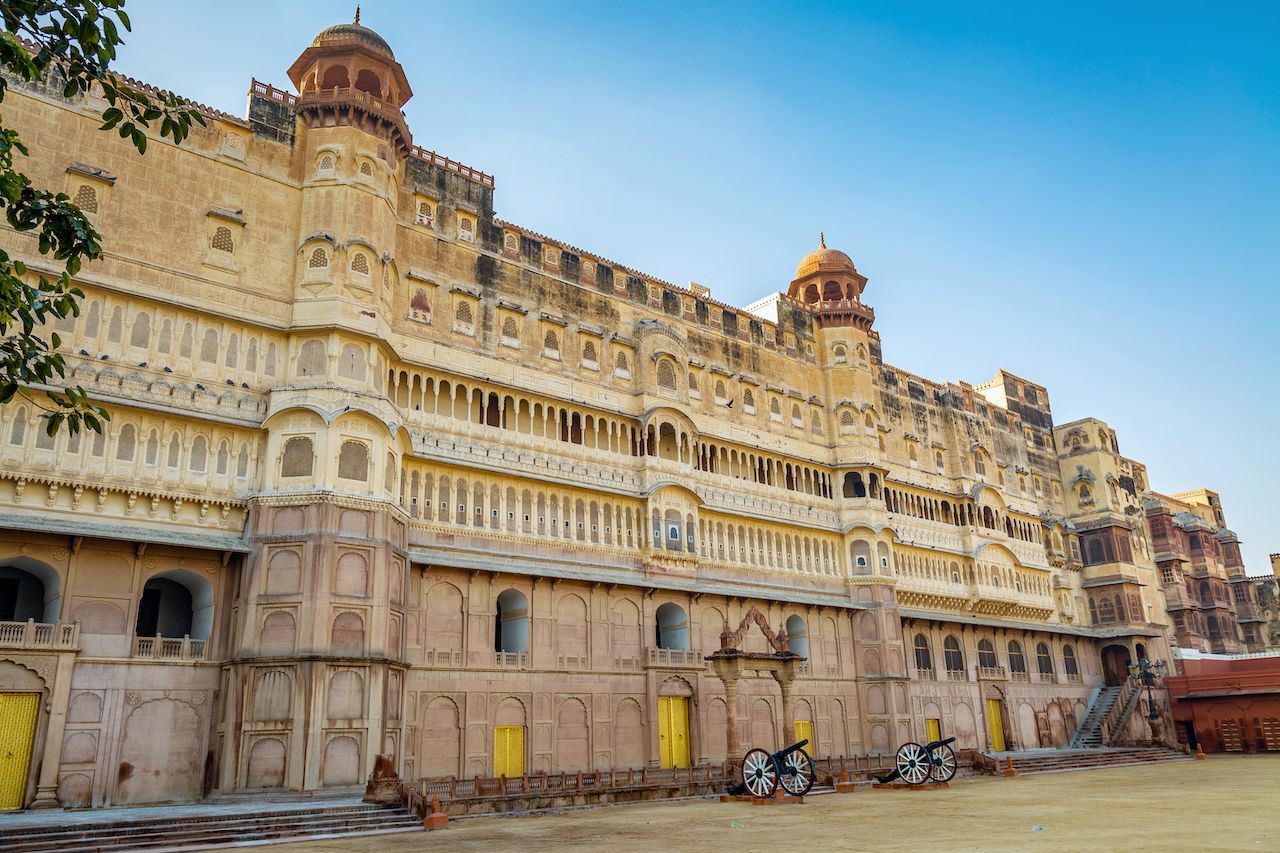 Bikaner is also famous for its architecture, notably the 16th-century Junagarh Fort, which serves as the backdrop for the annual camel festival. Rajasthan’s Department of Tourism stages the fair every January to honor the region’s camel population and attract tourists. Small celebrations are held throughout the region, but in Bikaner, there’s nothing small about the camel festival.

Bikaner’s camel festival spans two days. A lot happens in that time: Camels are dressed in colorful blankets, bridles, and accessories and paraded through the streets of Bikaner, from the Junagarh Fort to Dr. Karni Singh Stadium. Other camels may have their fur shaved into intricate patterns, mirroring the ornamentation found within the fort complex. 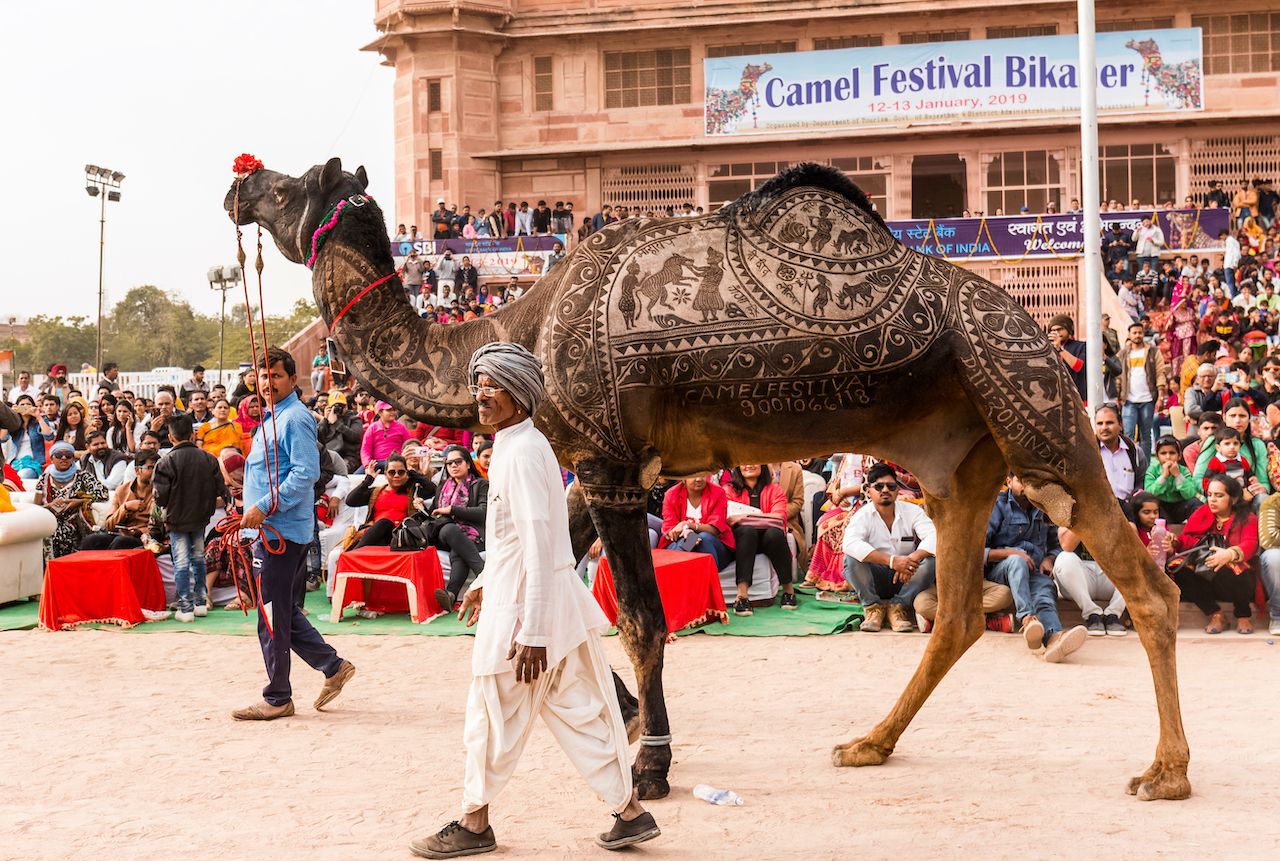 This camel-decorating and fur-cutting is not just ceremonial, however: It’s competitive. Once dressed in their desert best, Bikaner’s camels are entered into beauty pageants and judged on their adornments, as well as entered into dancing competitions. The people of Rajasthan also participate in pageants of their own to name that year’s Miss Marvan and Mr. Bikana. 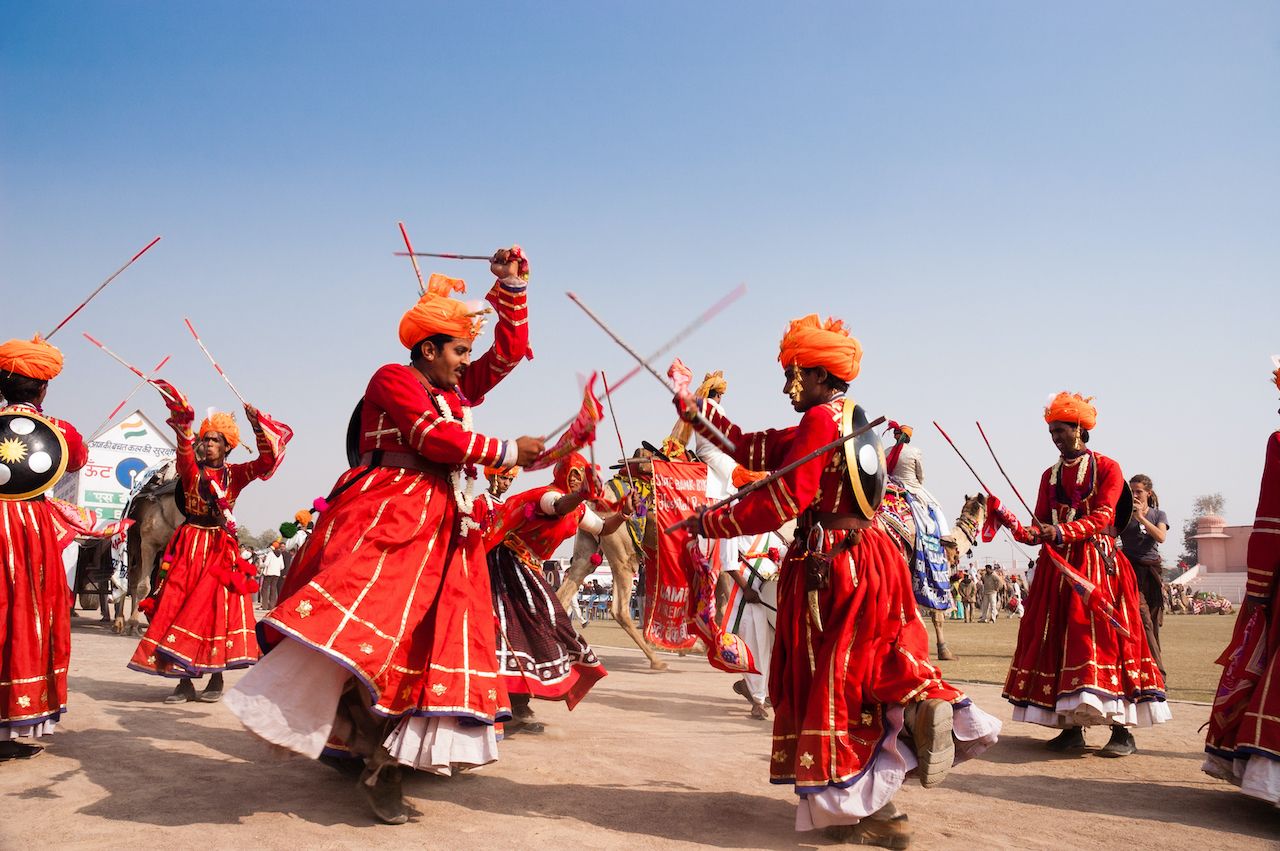 In the past, the festival’s second day has kicked off with a heritage walk through Bikaner’s old town from the 15th-century Rampuria haveli to the Bikaji Ki Tekri fort. Other activities might include camel races, music and dance performances, and puppet or acrobatics shows. During these puppet shows, viewers will get a glimpse of Bikaner’s history and folklore. At the end of the second day, a fire dance and fireworks show traditionally close out the festivities.

Participating in the festivities

While the Bikaner Camel Festival is a spectacle, there are also activities designed to encourage participation: Think tug of war, water-pot races, folk dance lessons, and turban-tying competitions for foreigners. Festivalgoers may even be allowed to help decorate the camels. In between, they can get an even more literal taste of the festivities by sampling delicacies made from camel milk, notably tea, candies, and ice cream. Food stalls are set up throughout the city center alongside souvenir stands selling jewelry, leather goods, and a variety of handicrafts. 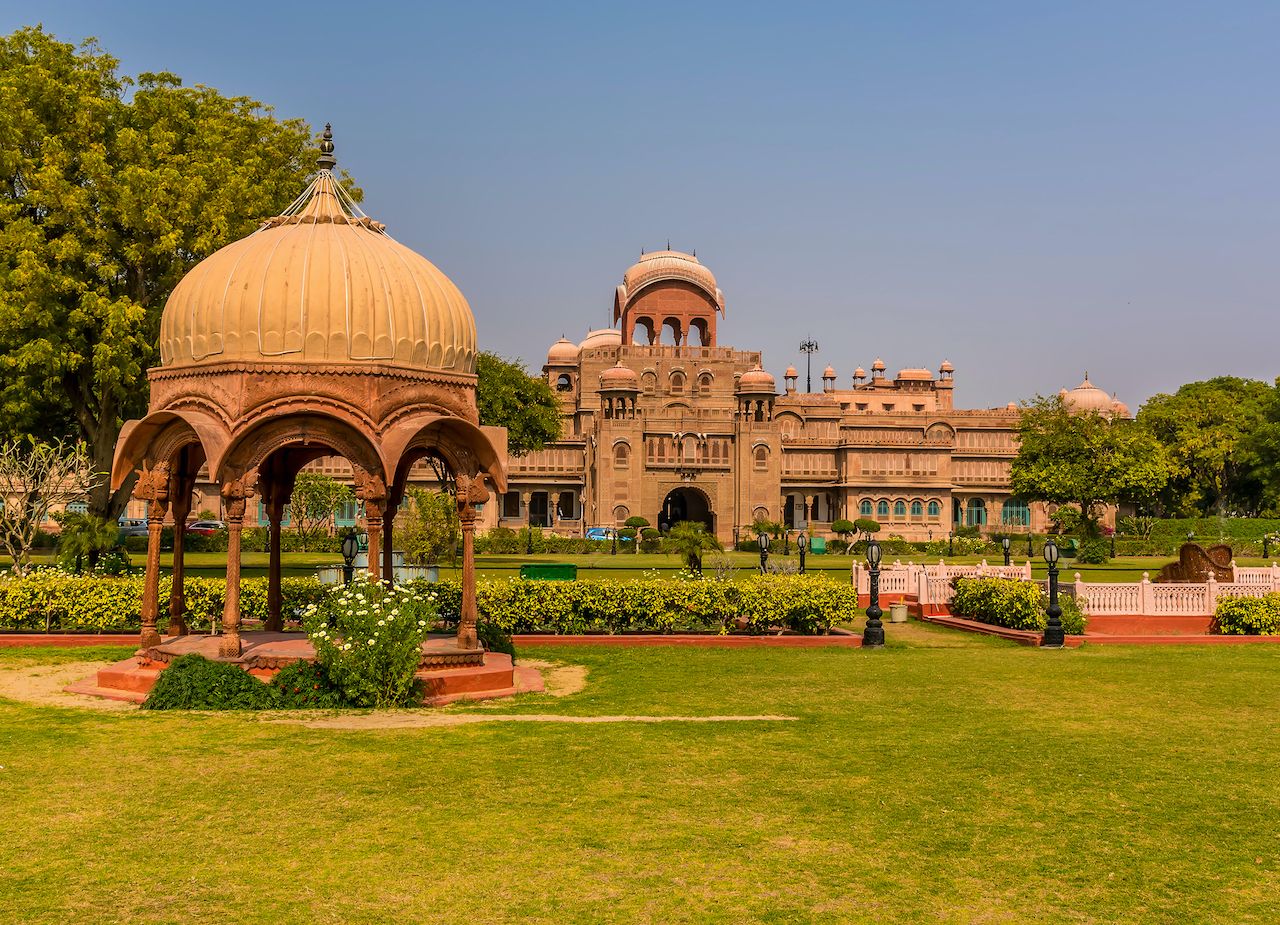 If you plan to attend the Bikaner Camel Festival in January, consider staying at the Laxmi Niwas Palace or Lallgarh Palace, both royal residences turned hotels. Lalgarh Palace is also a museum. There, you can arrange a visit to the National Research Center on Camel or get more information about attending the annual camel fair.

When you’ve had your fill of camel fun, be sure to make time for Bikaner’s historic sites. Beyond the Junagarh Fort, visitors would be remiss to skip the Seth Bhandasar Jain and Shri Laxminath temples. To learn more about the region and its royal family, make time for the Prachina Museum and Cultural Center and Sri Sadul Museum, as well. Even after the camel festival has ended, visitors can tour the local bazaars to stock up on mementos from their trip.

ReligionThailand’s Lesser-Known Phanom Rung Festival Is a Feast for the Senses
Tagged
Festivals India
What did you think of this story?
Meh
Good
Awesome