At the Phanom Rung Historical Park in the province of Buriram in rural Thailand, a 1,000-year-old Khmer temple sits atop an extinct volcano surrounded by rice paddies. In early April, the rising sun shines through all 15 doorways of the hilltop temple, creating a stunning visual effect. Locals gather each year for the annual Phanom Rung Festival to pray, give offerings, socialize, celebrate Thai culture, and observe the solar phenomenon which is said to bring good luck. 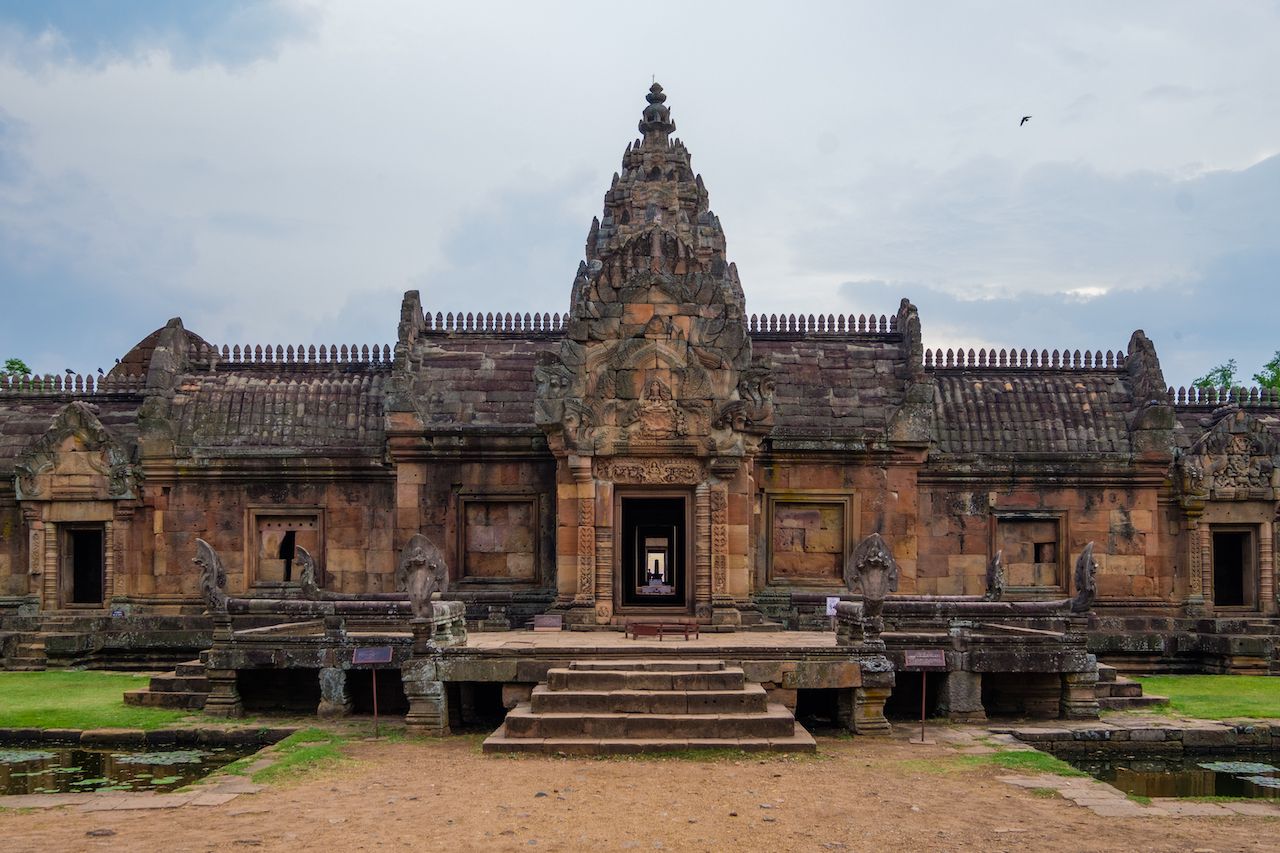 The two-day festival consists of a large, colorful parade through the ancient temple grounds, a booming sound and light show, live performances of traditional music and dance, and this being Thailand, lots and lots of food.

The events start with the opening of the food and crafts market, live musical performances, and Thai dancing. During the morning and early afternoon, take time to explore the temple complex, visit the archaeology museum, shop in the traditional market, and, of course, gorge at the food stalls. Meat eaters should try Isan sausage, a delicious mix of herbs, spices, fatty pork, and sticky rice. Vegetarians must try the famous Thai coconut pancakes made in iconic round frying pans.

The main event of the festival is the parade. Before the procession, the participants hang around “backstage” at some of the side temples, putting the final touches on makeup and costumes and posing for pictures with friends and family. This is an excellent place for photographers to get photos of the friendly participants who are eager to pose in their elaborate costumes. 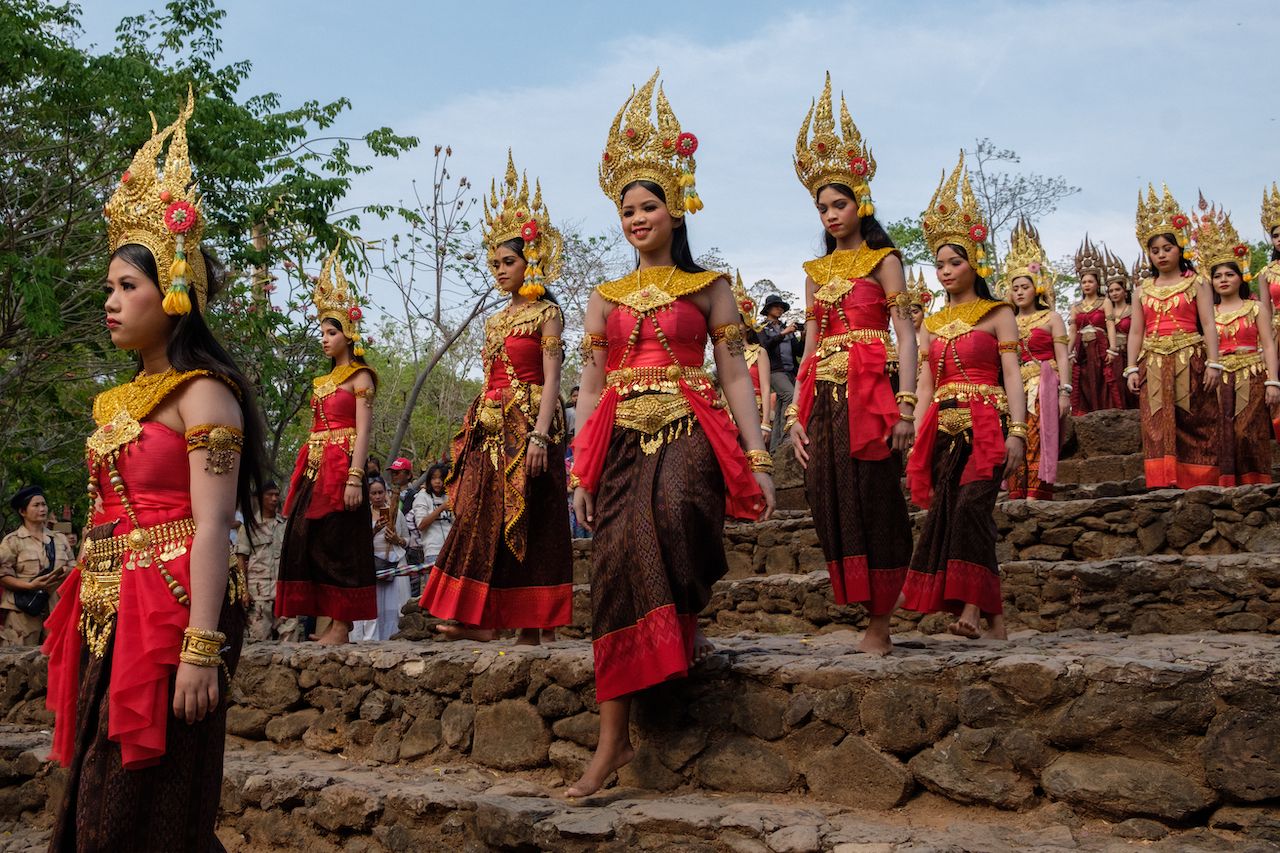 The parade takes place along an ancient street paved with lava-rock cobblestones and lined with stone statues. Groups from different regions of Thailand parade down the avenue and climb to the main temple, carrying statues of ancient gods that are so unwieldy it usually takes at least a dozen stout men to move them. They are accompanied by women in resplendent dresses, some with golden crowns atop their heads. 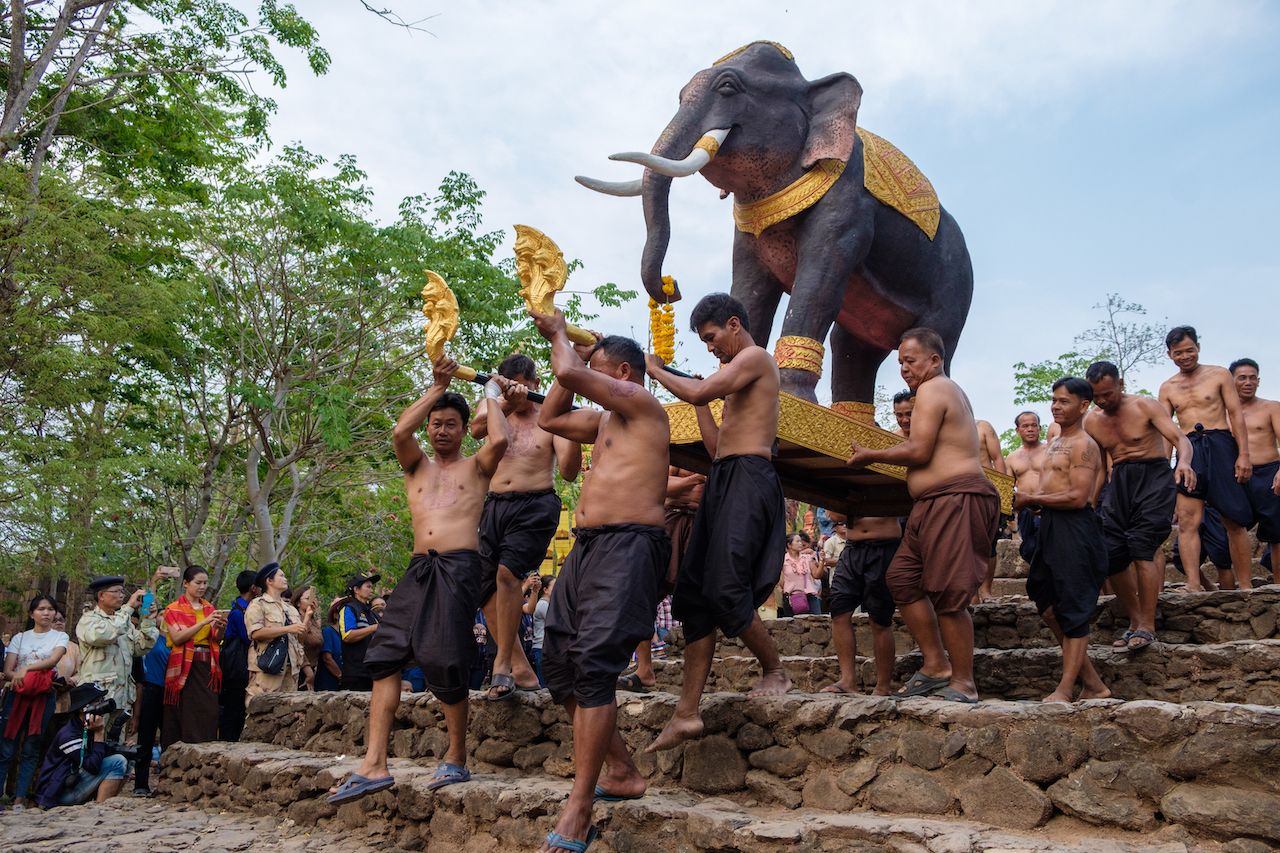 After carrying the floats through the parade grounds and placing them on top of the temple, the men and women spread out along the stone avenue and perform an intricately beautiful Thai dance set to a soundtrack of traditional string and percussion music.

In the early evening, a play about the history of Phanom Rung takes place on a stage at the food and crafts market.

The next day, the festival follows the same itinerary. 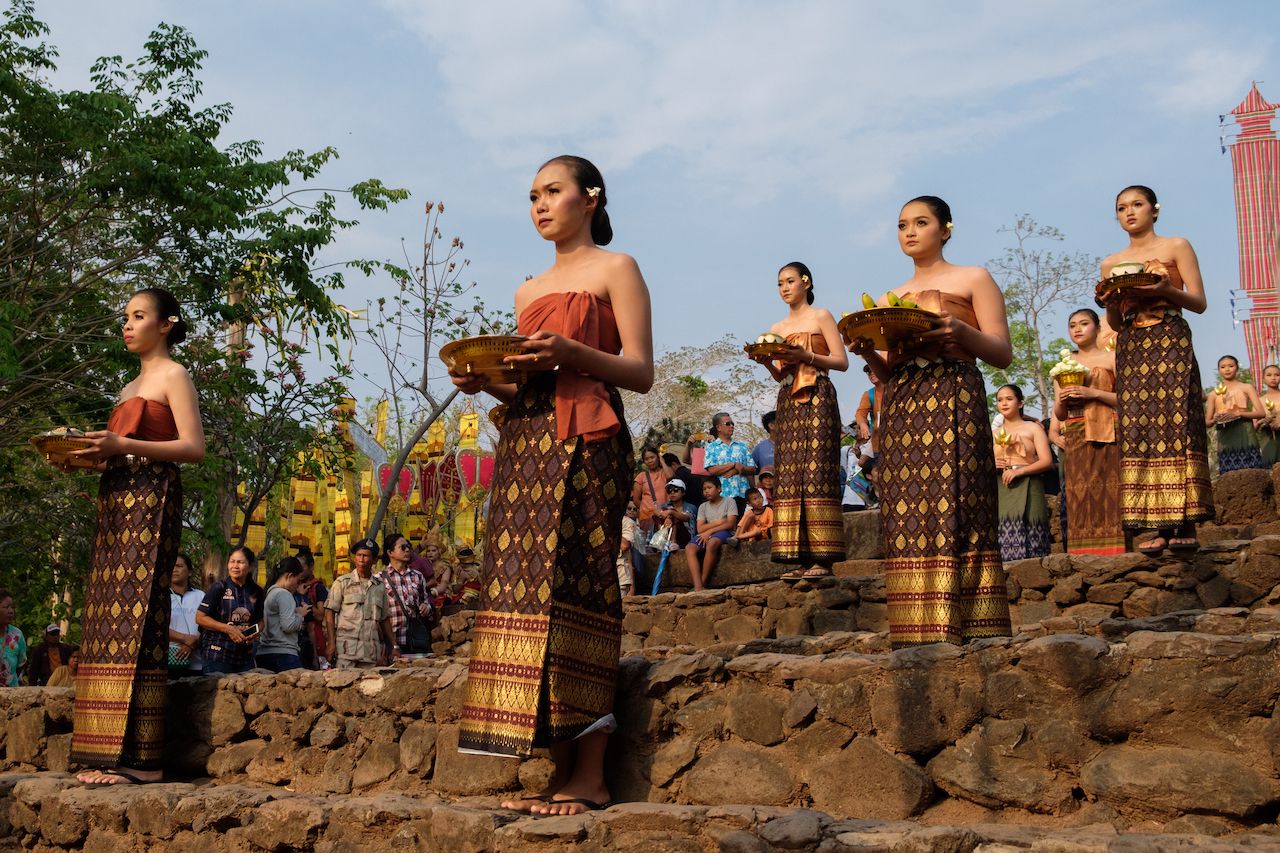 The sun shines through the 15 doors on April 3-5 every year. However, the festival itself is always on a weekend in early April. The park opens early on the days of the sunrise phenomenon. If you go, be forewarned that you will be sharing the view with many camera-toting visitors trying to get a photo. Clouds or haze can obscure the rising sun, thus ruining the spectacle.

Travel to Phanom Rung from Bangkok 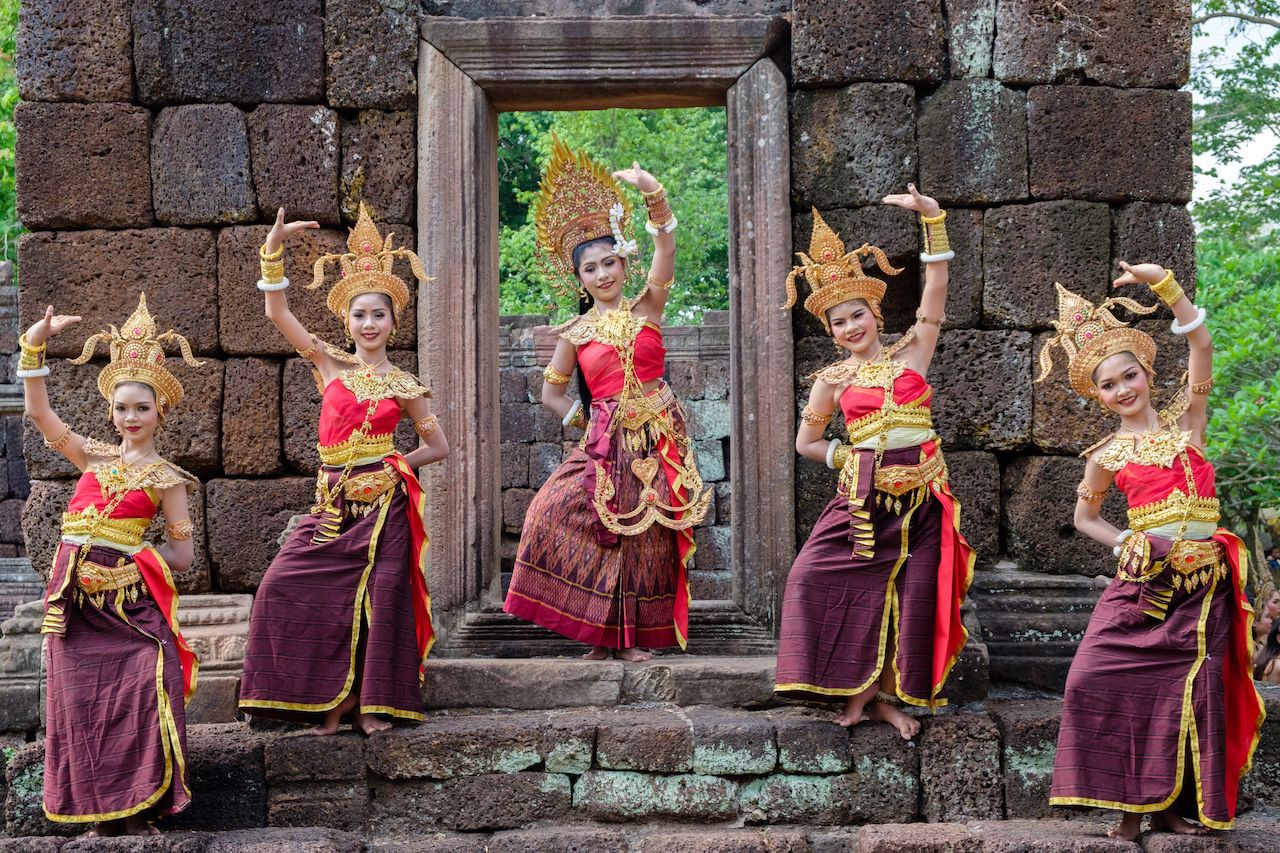 Nang Rong, located 15 miles from the Phanom Rung Historical Park, is the best base for visiting the festival. Although a small town, it has excellent accommodation options for all budgets and convenient transportation links to Bangkok.

There are three ways to get to Nang Rong from Bangkok. First, you can take one of the five daily flights from Don Muang Airport to Buriram and then take a taxi 50 miles to Nang Rong. The one-hour flight usually costs between $35 and $50 one way, and the cab to Nang Rong is about $25 from the prepaid taxi stands at the airport.

Alternatively, there are three daily buses from the Bangkok Bus Terminal to Nang Rong. Tickets for the four-and-a-half-hour journey cost about $14.

You can also rent a car in Bangkok or the Buriram airport and drive to Nang Rong, which will give you flexibility when visiting the area.

All the local hotels can help arrange a taxi from Nang Rong to the park, and the town of Nang Rong itself is easily walkable.

Where to stay and eat in Nang Rong

Nang Rong is a friendly town with Buddhist temples, a bustling daily market, and several excellent places to stay. The Socool Grand Hotel is perhaps the best accommodation option because it is centrally located and has a pool. April is the hottest month in Thailand, so a refreshing dip can be lifesaving.

The P.California Inter Hostel has excellent reviews and some of the cheapest beds in town. The Phanomrungpuri Hotel is the most upscale lodging in the city with an on-site restaurant, bar, swimming pool, and Thai massage center. However, its location away from the city center is best suited to visitors with a car.

When it comes time to food and drink, you have several great options. The excellent TRI Cafe and Restaurant, set inside a glass building with greenery hanging from the ceiling and cooling fountains along the perimeter, has food to rival restaurants in downtown Bangkok. Try the fried shrimps in Indian curry or the fried laab moo, a modern twist on a Thai classic.

If you are looking for some nightlife after the festival, the Ekanake restaurant has live music every night on its outdoor stage and patio.

There are dozens of informal Thai restaurants and noodle shops along the main street. Pick one that is busy and dive in.

Editor’s Note: According to the Tourism Authority of Thailand, the festival in 2020 is subject to cancellation. Regardless, we don’t recommend you travel there this year. Thankfully, you have plenty of time to plan for 2021.

FestivalsThree Days Off the Ground: a Shan Ordination Ceremony in Thailand
Tagged
Festivals Religion Thailand
What did you think of this story?
Meh
Good
Awesome