When chef Ohm Suansilphong began planning the Thai restaurant he hoped to open in America, he had a radical vision: He would ban pad thai. In the American lexicon of Asian dishes, there are three that are well-known: sushi, pho, and, of course, pad thai. A Thai restaurant that refused, on principle, to serve pad thai would be unheard of and risky. Still, in 2016, Suansilphong opened Fish Cheeks, which draws inspiration from cuisines across Thailand, its menu peppered with prawns, fish, and curry (and one noodle dish). In 2018, he opened the fast-casual Chicks Isan in Dekalb Market, a food hall in Brooklyn that’s one of the country’s best. A conversation bubble hovering above the outpost’s hand-drawn chicken mascot reads, “No pad thai zone!”

Suansilphong’s youthful face often breaks into a playful grin when speaking with him, his eyes sparkling mischievously as though he’s the keeper of some extraordinary secret. In a way, he is. Suansilphong learned to cook, alongside his brother and business partner, Chat, in the family kitchen in Sukhothai, in Thailand’s northern Isan region. Isan cuisine, though widely available throughout Thailand, is still mostly unknown to Westerners. With his New York City restaurants, Suansilphong wants to cook the food he grew up eating, the dishes that represent the home of his ancestors. 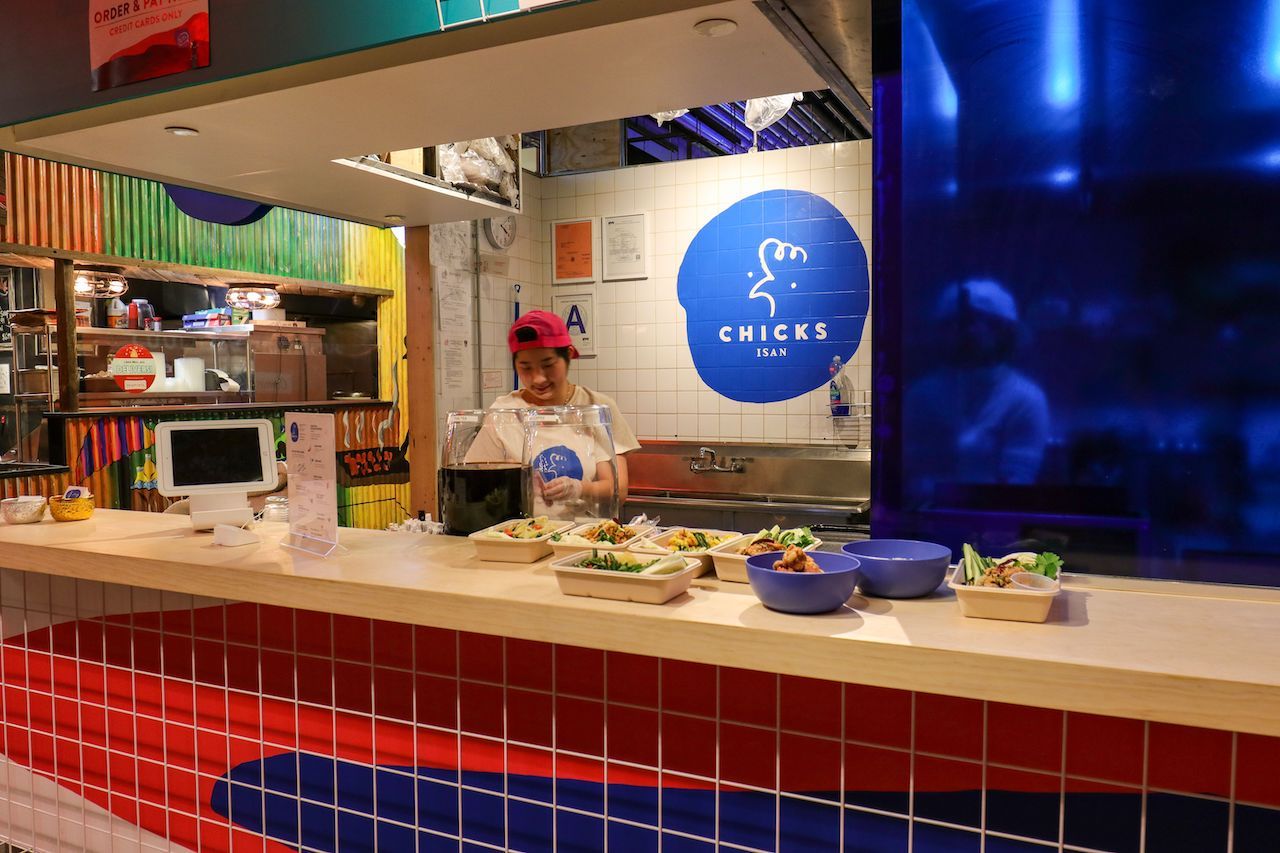 Through his translator Jenn Saesue, the co-owner of Fish Cheeks, Suansilphong tells me that very little pork is farmed in Isan’s dry climate. Instead, diet staples there are freshwater fish, insects (ant eggs are a popular ingredient in soup), and frog. In the past, traditional Isan cuisine didn’t include much pork. However, Suansilphong explains that modern interpretations of the region’s dishes, like those served at Chicks Isan, have by now evolved to include pork. Noodles do not appear in traditional Isan cuisine, a mandate that Suansilphong has decided to stick to.

In Isan food, the flavors are typically balanced between spicy and salty. Most dishes are grilled, steamed, or boiled rather than pan-fried, and many have little to no oil. The seasonings, however, will likely be familiar to fans of Thai food. Most dishes are garnished with lime, kaffir lime leaf, cilantro, leeks, scallions, and fish sauce.

And while the rest of Thailand eats Jasmine rice with dinner, in Isan, sweet sticky rice is a more common side dish. The gluey texture of the rice makes it easier to grab the leftover liquids and sauces in dishes like laab (minced pork with herbs) — a texture especially useful when eating the traditional way without utensils. Sticky rice, however, is where the sweetness of Isan food ends. There’s very little sugar added to main dishes to soften the blow from a hit of spice and salt.

That lack of sweetness might be part of the reason that Isan food has never caught on in the United States.

“Americans eat a lot of sweet stuff,” Suansilphong tells me through Saesue, with the caveat that he doesn’t want to make generalizations about our tastes. “When you’re talking about pad thai, it has tamarind, it’s sweeter. Whereas Isan food, it will be salty and spicy.” 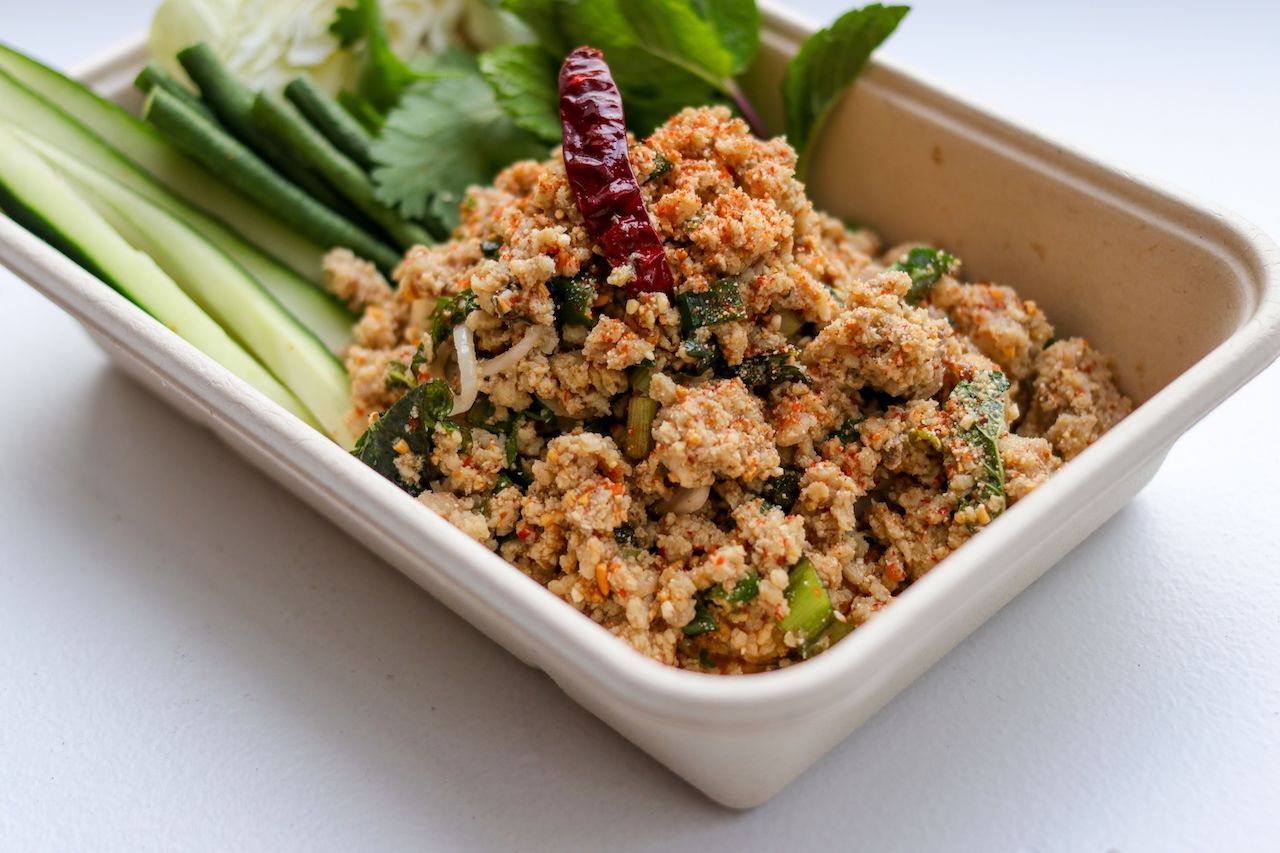 Take the laab mu at Chicks Isan. The minced, boiled pork dish is topped with ground sticky rice, chili, lime, mint, scallion, and raw onion. Lime permeates every bite, making the dish tart and tangy. And then there’s the pungent and sour, though not unpleasant, funk of fermented fish. There’s no alluring sweetness to this food. It has bite, even snarl. So perhaps it’s no wonder that Americans, with their soft palates, have yet to embrace Isan cuisine.

To be fair, Americans aren’t alone in their hesitation to eat more funky fish. In Isan, fermenting and pickling fish is a common preparation technique, mostly as a result of the region’s geography. A river running through the region provides fresh water fish, but not in abundance. What is available needs to be preserved. Though fermented fish is necessary to keep everyone in the region properly fed, it’s still controversial. Saesue explains that, even in Thailand, fermented fish is a divisive topic — some love it, some hate it (she’s firmly in camp “love” and her mother is on the other end of the spectrum). 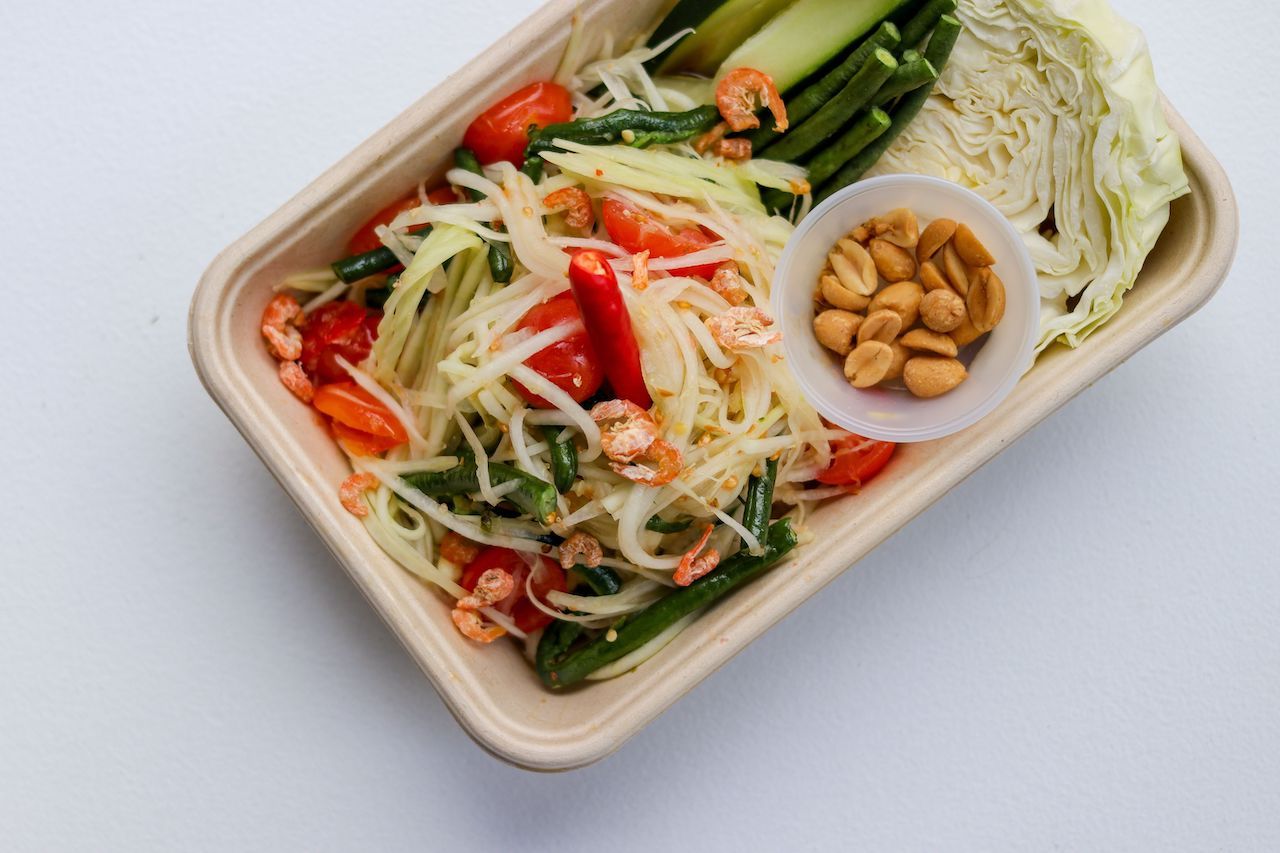 Saesue adds that in Thailand, Isan food is well-known and available throughout the country. The region’s dishes are popular street food, usually served by a vendor or on a portable cart. That’s part of the reason Suansilphong wanted to open Chicks Isan in a food court, because he still sees Isan cuisine as best enjoyed as a low-effort casual meal.

There are multiple reasons for this. For one, many Isan dishes don’t take a lot of heat to prepare. Most of the components, like in papaya salad, are ready to eat and the dish simply needs to be assembled. Suansilphong goes so far as to say that he wouldn’t represent Isan food in America as fine dining food.

As for why it isn’t more popular in Western cultures, Saesue believes there are simply less people from the Isan region who come to the US and open restaurants. Hence the proliferation of noodle dishes like pad thai.

Suansilphong is bored, it seems, with America’s myopic vision of Thai cuisine, but he was never on a crusade to spread the holy word of Isan cuisine. He just missed the food from home.

“I just wanted to eat [Isan food],” he jokes about his reasons for opening his restaurants. “There are restaurants that sell Isan food, just not the grilled chicken that I like.”

When the laughter clears, Saesue gets serious.

“We want to educate people about Thai food,” she explains. “It’s not that we don’t like pad thai. Don’t get us wrong. We like it. We just see a lot of it, and we don’t want to sell it. When we go to Thailand, and we don’t even eat that. It’s a good dish, but there are other better dishes.” 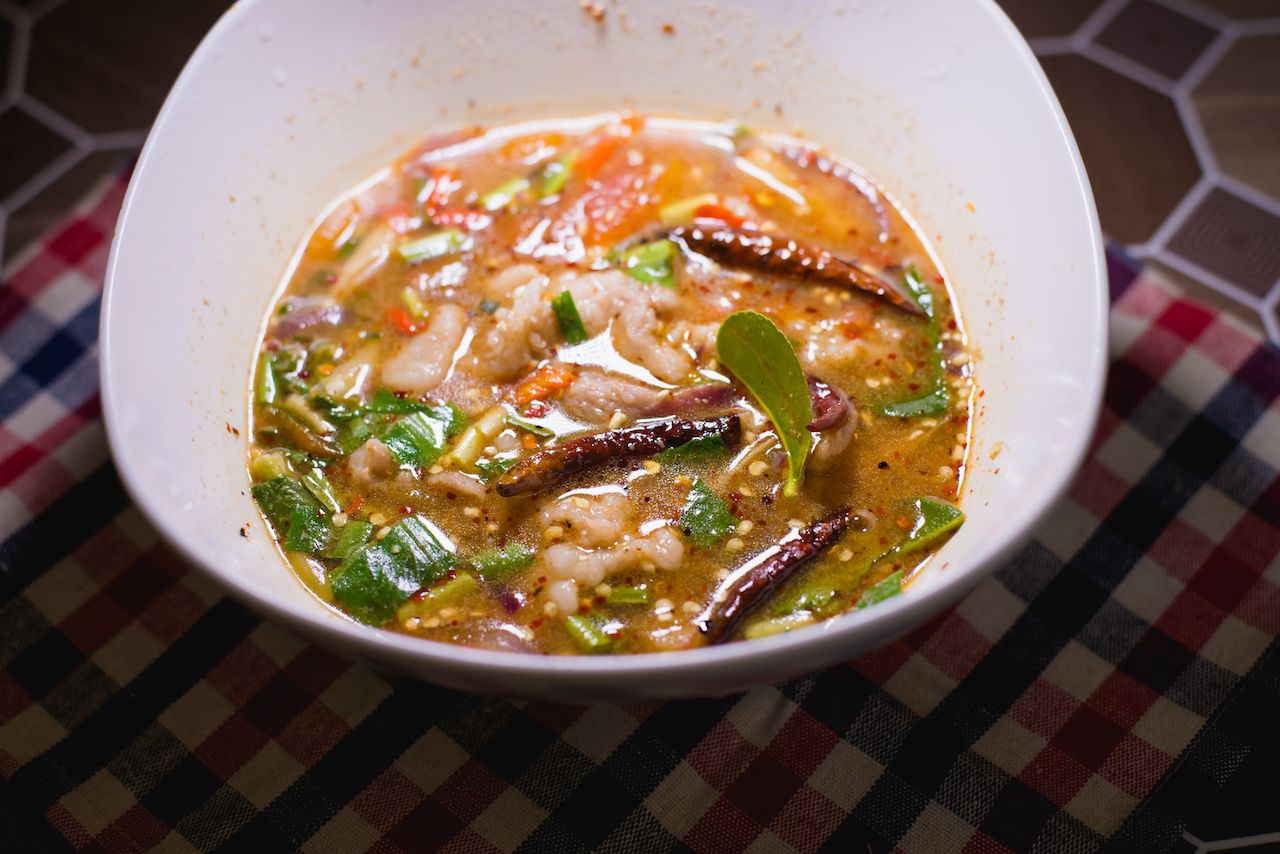 Som tum: This dish combines shredded unripe papaya along with the signature flavors of Isan cuisine, such as fish sauce, chilis, lime, and a dash of palm sugar. The ingredients are pounded together using a mortar and pestle. Fermented fish or crab is also often added to the salad.

Sai krot isan: These fermented sausages are among the most popular street foods in Isan. Isan sausages are served with cabbage, chilis, and slices of fresh ginger, and have a distinct sour-salty flavor.

Laab: This minced meat dish is seasoned with fish sauce and slices of lime, then topped with ground rice. Laab is among the spiciest Isan dishes.

Tom sab: The main ingredient in this clear broth soup is cow intestines (otherwise known as tripe). Don’t be intimidated by internal organs. Additions of kaffir lime leaf and lemongrass give this soup a fragrant citrus flavor.

Food + DrinkRoyal Thai Cuisine Is the Most Beautiful Food You Can Eat. Here’s Where To Try It.
Tagged
Food + Drink Restaurants + Bars Thailand
What did you think of this story?
Meh
Good
Awesome