When King Rama X took the throne this past May, it was Thailand’s first coronation in nearly 70 years. The country and its subjects were awash in yellow (the decreed color) and paid homage with banners, portraits, and monuments to King Maha Vajiralongkorn in the months leading up to the grand event. With the excitement around crowning a new monarch has also come renewed interest in Royal Thai cuisine.

Royal Thai cuisine encompasses the dishes traditionally served only to members of the royal court. Very specific rules exist for this type of cuisine, long considered to be country’s most elevated gastronomy. Parameters include using the best ingredients, removing bones and pits, selecting natural ingredients to boost color, cutting elements precisely, and serving dishes in bite-sized portions to make them easier to eat. Royal Thai cuisine is also a study in balance, and chefs avoid extremes in aromas and flavors, choosing ingredients that are uniform in size and shape. It’s as much artistry as it is sustenance.

Royal Thai cuisine has its roots in the palace of the Ayutthaya kingdom, which lasted from 1351 to 1767, during which the practice of dining on cushions set around low tables originated. For hundreds of years, recipes were closely guarded secrets and non-royals were strictly forbidden from eating or even preparing these dishes. Today, these class restrictions no longer exist.

“Royal Thai cuisine is famous for its quality, delicacy, and exquisite preparation,” says Mekhala Netipo, deputing marketing director for Food of Asia, a food service company headquartered in Bangkok. “[It’s] not like any other Thai food… it’s truly the best Thai food one could imagine.” Netipo goes on to say that all dishes that fall under this category must please both the eye and the palate, with fresh and clean ingredients that are elegantly plated.

Take, for example, miang kham bua luang, a small, one-bite appetizer of shrimp or other meat and vegetables wrapped in a lotus petal. 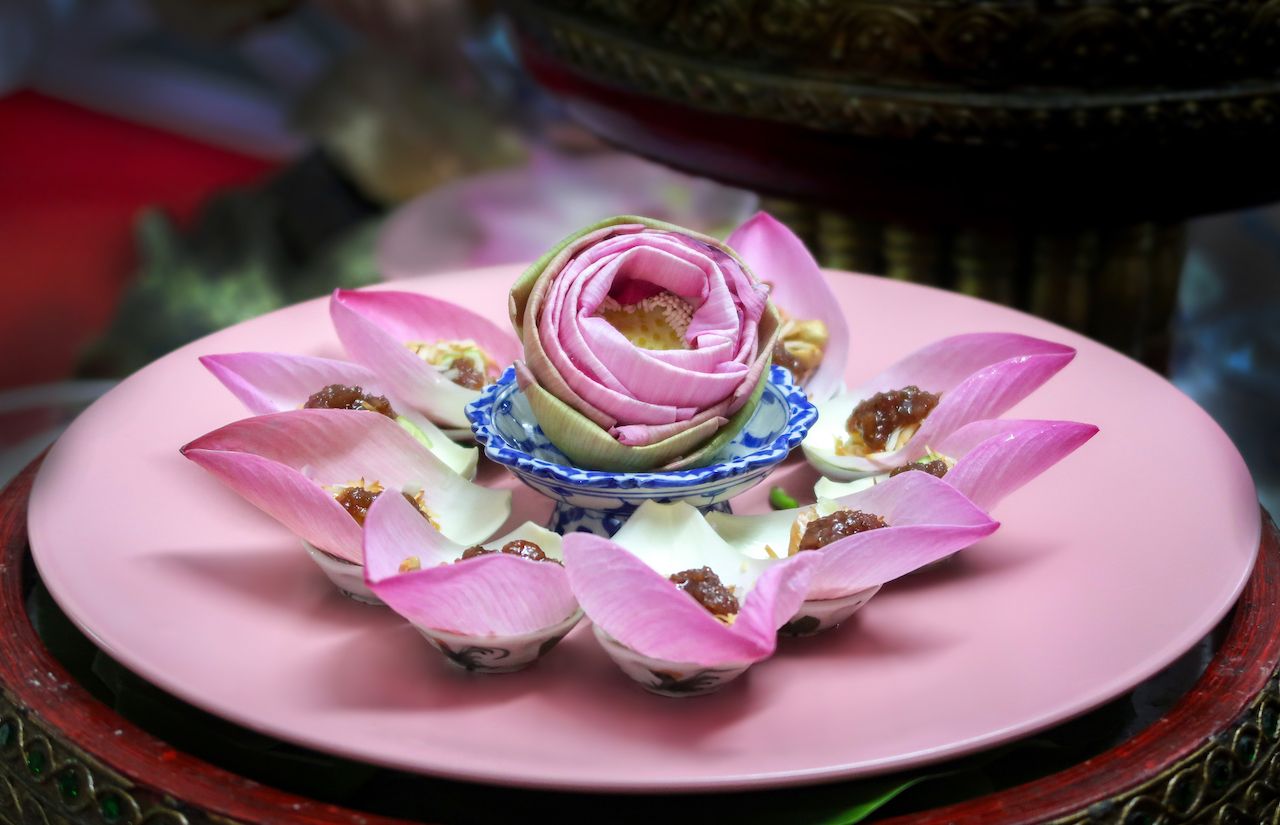 A Royal Thai meal is generally ordered as a set, with mildly seasoned dishes served first (including a platter of raw or deep-fried, hand-carved vegetables with dipping sauces), after which stir-fries, salads, curries, and deep-fried foods arrive at the table accompanied by jasmine rice.

One of the dishes that epitomizes Royal Thai cuisine is spicy pomelo salad with grilled jumbo river prawns. “It’s a great combination of sweetness from fresh pomelo, sour lime juice, and other vegetables that make this salad truly refreshing and delicious,” Netipo says. “No added sugar or fish sauce is used [and] it’s a piece of culinary magic.” 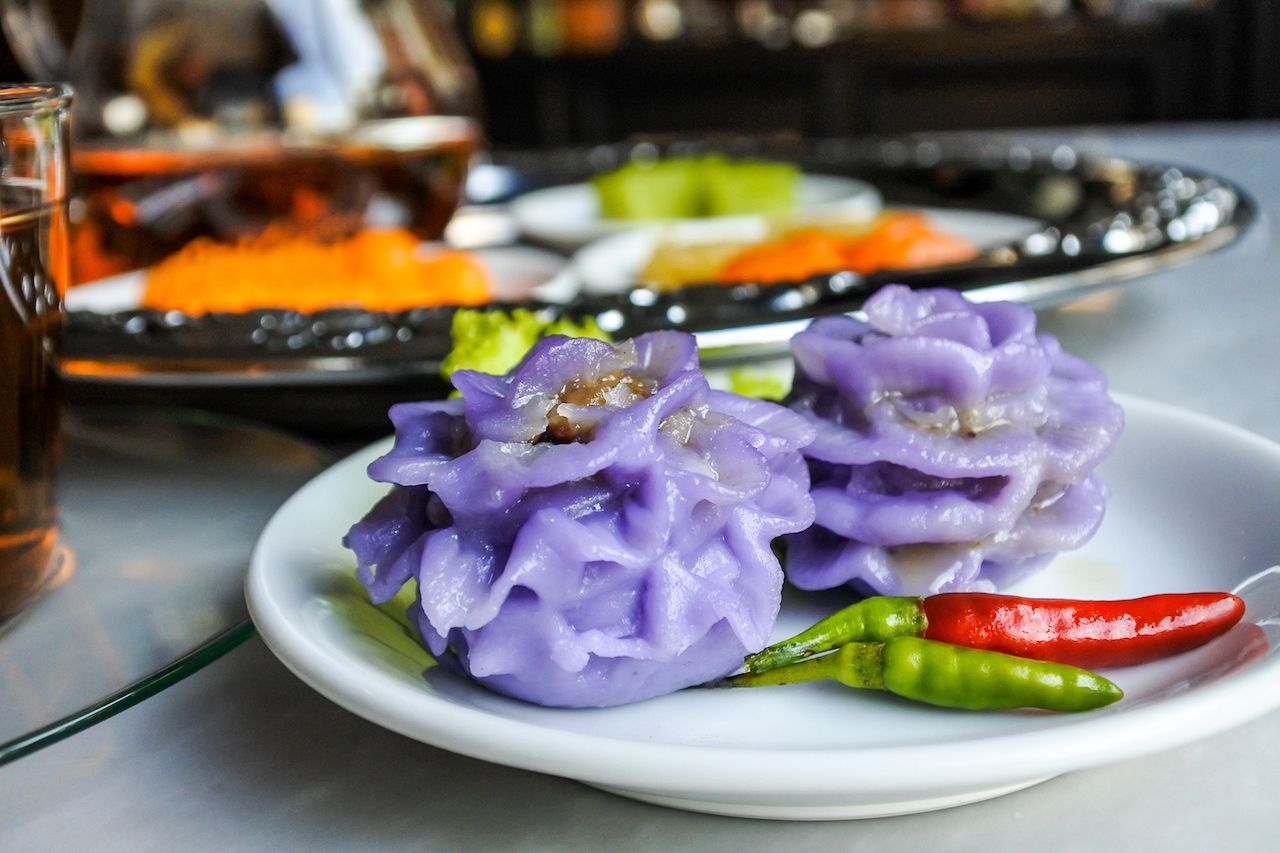 Despite access no longer being limited to the royal families, true Royal Thai cuisine can be hard to find. It’s very worth the search, however. These are the restaurants to try it and which dishes to order. 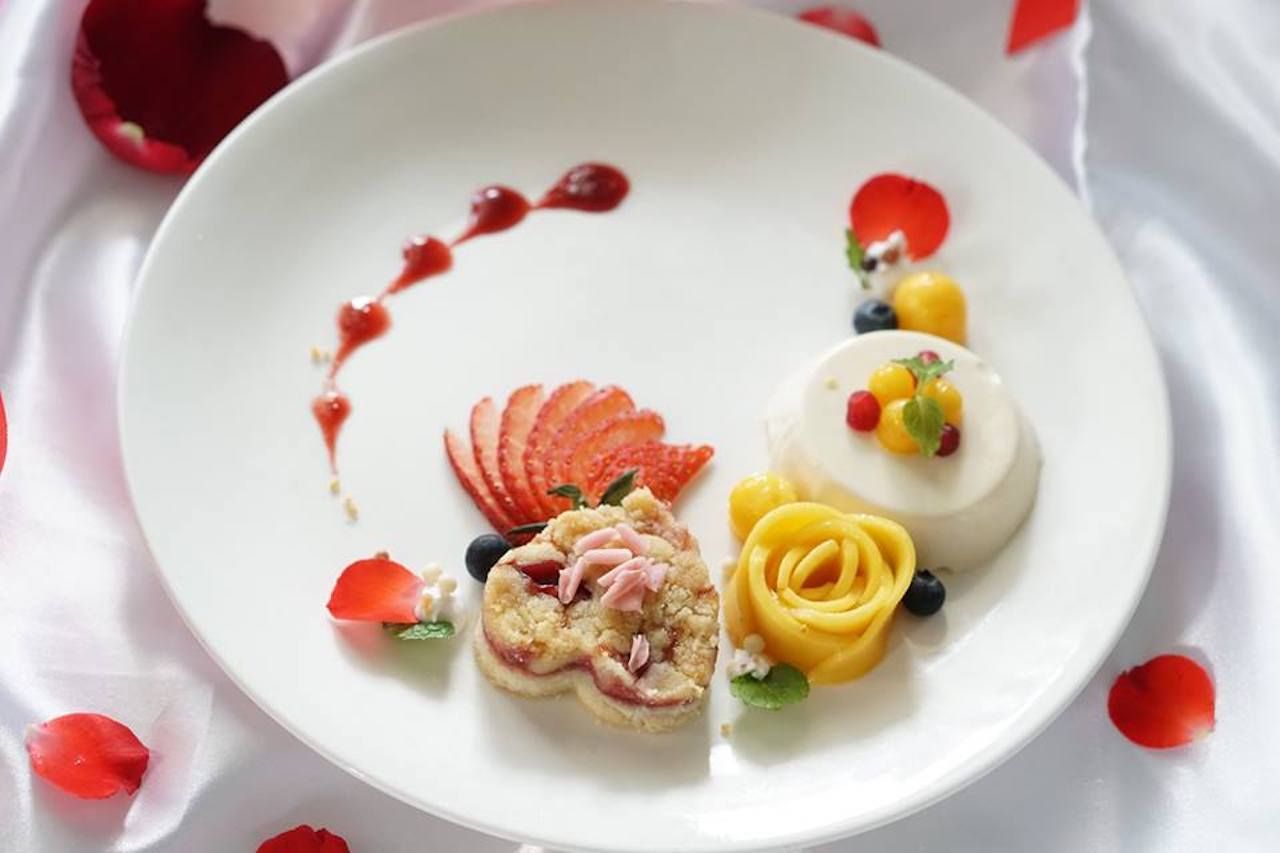 Blue Elephant: With six locations around the globe, including outposts in Bangkok and Phuket, this chain of restaurants and cooking schools has long been a pioneer in promoting and elevating Royal Thai cuisine. Overseen by founder and master chef Nooror Somany-Steppe, who is considered to be one of the top chefs in the country, the two Thai locations incorporate regional dishes. Blue Elephant Phuket is located in an antique governor’s house in the center of Phuket Town, and the Peranakan Menu draws influence from Chinese-Phuketian and Penantian. The Bangkok location is in a traditional colonial-style home on Sathon Road. The royal dishes here include dishes like steamed floral-shaped butterfly dumplings filled with free-range chicken and herbs.

Thanying: Named in honor of Her Serene High Princess Sulabh-Valleng Visuddhi, who served as the head cook in the Sukhothai Palace kitchen for her half-sister Queen Rambhai Barni of King Rama the Seventh, this Bangkok restaurant serves the types of dishes the Queen would have requested. Order khao tang na tang (crispy rice crackers with minced pork and peanuts served with coconut milk), gai hor bai toey (deep-fried chicken wrapped in pandan leaves), and poo jaa (steamed mixed crabmeat with minced pork on a crab shell). 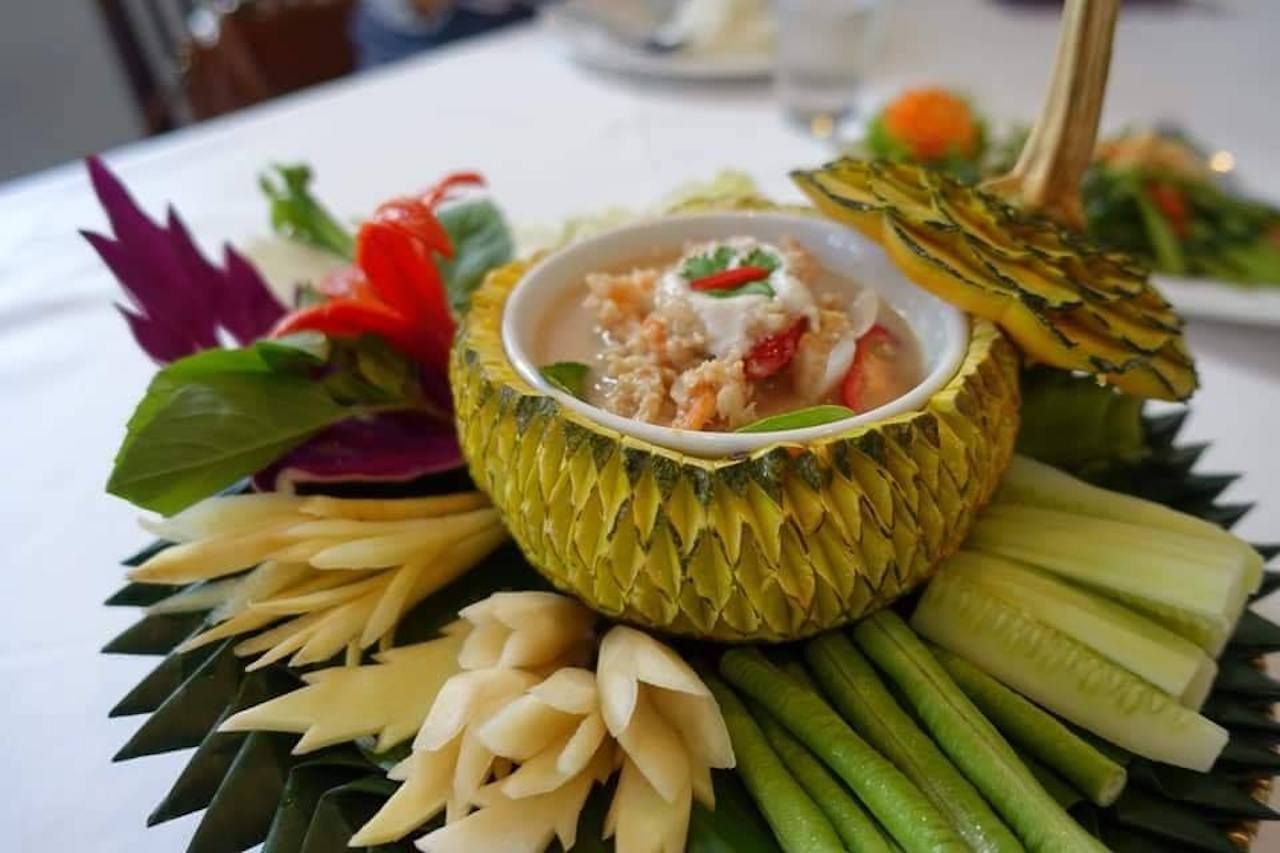 Bussaracum Royal Thai Cuisine: This Bangkok restaurant, opened in 1982, was the first in the kingdom to specialize in dishes popular in royal households. Located in a renovated home that’s surrounded by gardens that the kitchen sources herbs and spices from, the culinary team draws on regional variations for its recipes. Dishes include toong ngern yuang made with minced shrimp and crab meat wrapped in crispy bean curd meant to resemble golden bags. Nam prik ong and nam prik num — dips popular in the northern part of the country — are served with hand-carved vegetables and pork cracklings. Khao op sapparot mixes smoked ham, shrimp, raisins, peas, and pineapple fried rice, and it’s plated in a carved-out pineapple. Bussaracum also offers cooking classes if you’d like to bring some of the techniques home with you.

Baan Suriyasai: This restaurant, tearoom, cooking school, and cocktail bar is located in a restored early-20th-century family compound in Bangkok that dates back to 1922. The philosophy here is the “Soontaree Life,” a “refined and leisurely want of enjoying the beautiful things in life,” and royal dishes are often given a contemporary twist. Balls of watermelon are served atop fried fish flakes in a refreshing dish that mimics prosciutto and melon, beef shank massaman curry comes with lotus seeds and blood orange rather than pineapple and fried peanuts, and a dessert of braised banana with fresh cream and roselle syrup uses a recipe personally handed down to the restaurant from the royal kitchen of King Rama VII. 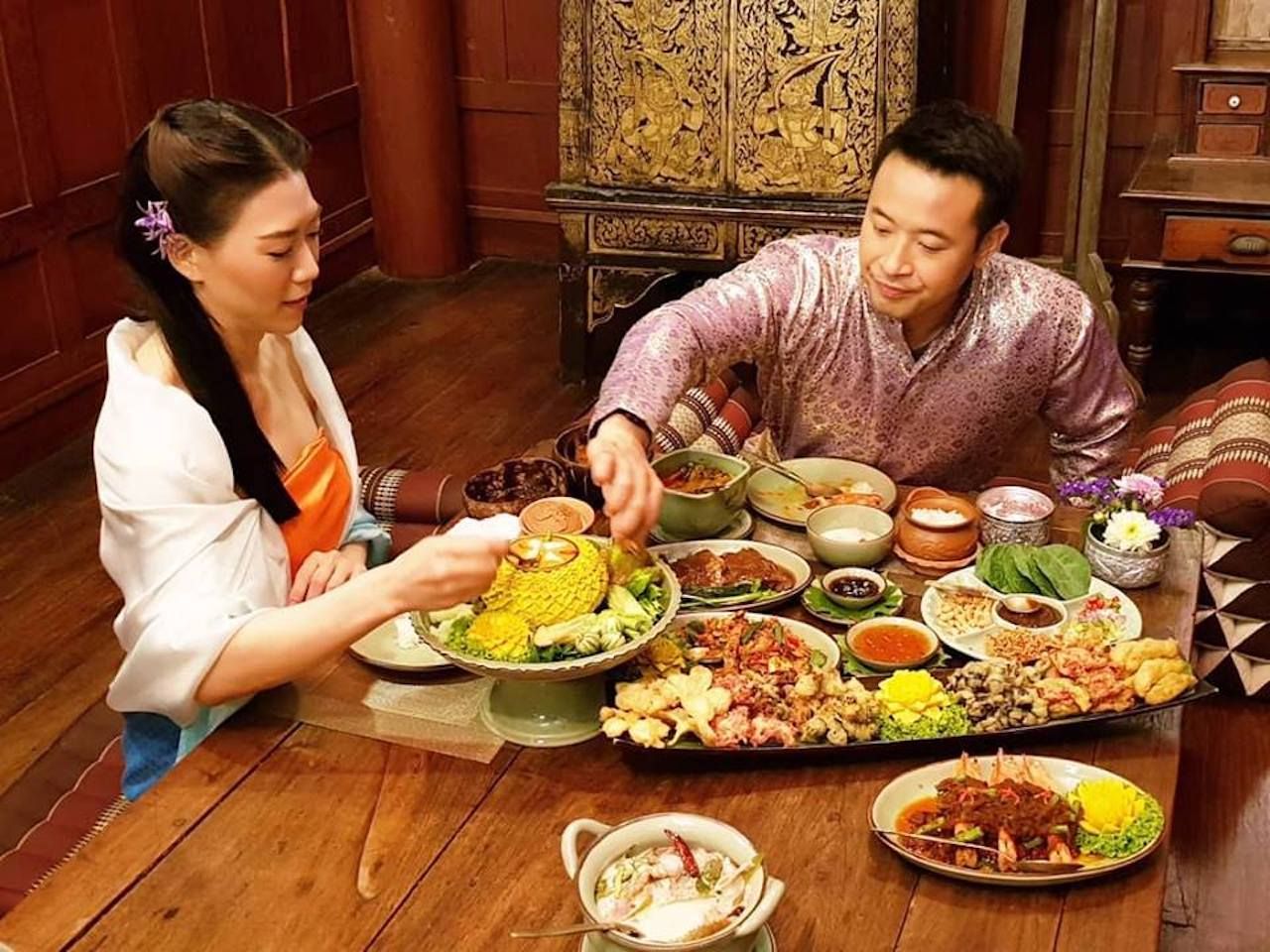 Ruen Mallika Royal Thai Cuisine: This Bangkok restaurant opened in 2002, and it’s a place where details matter, from the celadon tableware to the meticulously carved fruits and vegetables to the jasmine-adorned finger bowls to the staff uniforms finished with sashes of locally made fabric. Housed in a traditional teak house built around 180 years ago during King Rama II’s reign, the menu is a mash-up of the owner’s name and the concept of “authentic Thai” dining. Royal Thai cuisine is always beautifully plated, but Ruen Mallika is a standout. A platter of deep-fried assorted flowers is served with chili dipping sauce, a bowl of spicy caramel paste sits in the middle of a platter of bite-sized carved and deep-fried vegetables, and glazed pork and rice and fish and crabmeat souffles are plated in tiny ceramic cups.