It’s a sweltering morning in northern Thailand, and the local population seems to have evaporated into the heat haze. Then out of the silence comes the distant clash of cymbals, the echoing of gongs, and the deep boom of drums. In a few moments the Poy Sang Long procession will liven up the street with sights and sounds that a Hollywood director would have difficulty dreaming up. Young Shan boys aged between seven and 14, who are preparing to be ordained into the Buddhist monkhood, are dressed up in jeweled finery, their faces powdered and painted, and carried ceremoniously around the town. Riding on ponies or perched on the shoulders of different family members and sheltered by golden umbrellas, these “jewel princes,” as they are known, spend the best part of three days off the ground.

The festival’s origin and purpose

Though Thailand is rich in colorful festivals, a traditional Thai ordination is a somewhat austere affair. The Shans, by contrast, follow a custom of holding elaborate ordination ceremonies. Legend has it that the first Buddhist novice was Prince Rahula, the Buddha’s own son, who gave up his lavish lifestyle to follow his father’s spiritual teachings. On the last day of Poy Sang Long, the new novices exchange their jeweled robes for the saffron cloth of the monkhood. While the Shans are devout Buddhists, only a few of the boys will stay more than a few weeks in the monkhood due to study or family commitments. But when they leave they will have completed an important rite of passage, and be seen as “spiritually ripened” in their parents’ eyes.

On the first of the festival’s three days, the boys have their heads shaved, a task shared by parents and relatives, and they are ceremoniously bathed in herbal waters. Once ready, the boys are dressed in their splendid gowns and their faces are daubed with lipstick and makeup, then they are paraded around the town to visit relatives and pay homage to the city pillar, which is believed to house the city’s guardian spirits. Each boy is accompanied by three attendants — one to carry him, another to shelter him from the sun with a tall gold umbrella, and the third to guard the precious jewels. 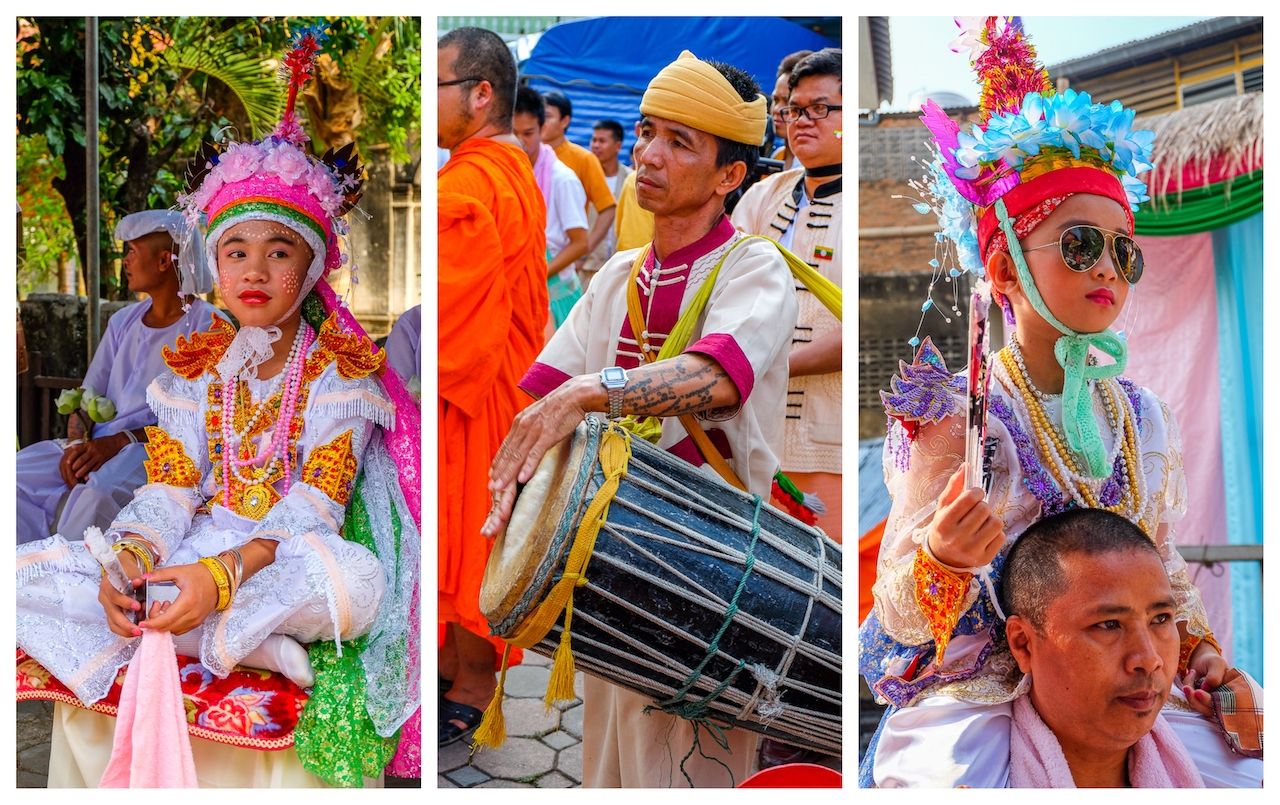 For the next three days, the boys are carried everywhere by their helpers, only touching the ground inside a house or temple. Relatives and friends receive them with great joy, believing the visit will bring them luck. Glasses of rice whiskey disappear down the throats of the helpers and the music gets louder as the route zig-zags around town. All this, of course, is good training for the main procession on the second day.

On the morning of the second day, the procession is led by musicians announcing the arrival of the jewel princes with the loud wailing of traditional Thai instruments. Behind them, the mothers and sisters of the boys walk proudly, dressed in their best and carrying money and other offerings for the monks strung on bamboo poles in the shape of trees. Finally come the novices themselves, sitting on the backs of ponies or on the shoulders of fathers, brothers, or uncles. They look resplendent in their colorful outfits and floral headdresses. 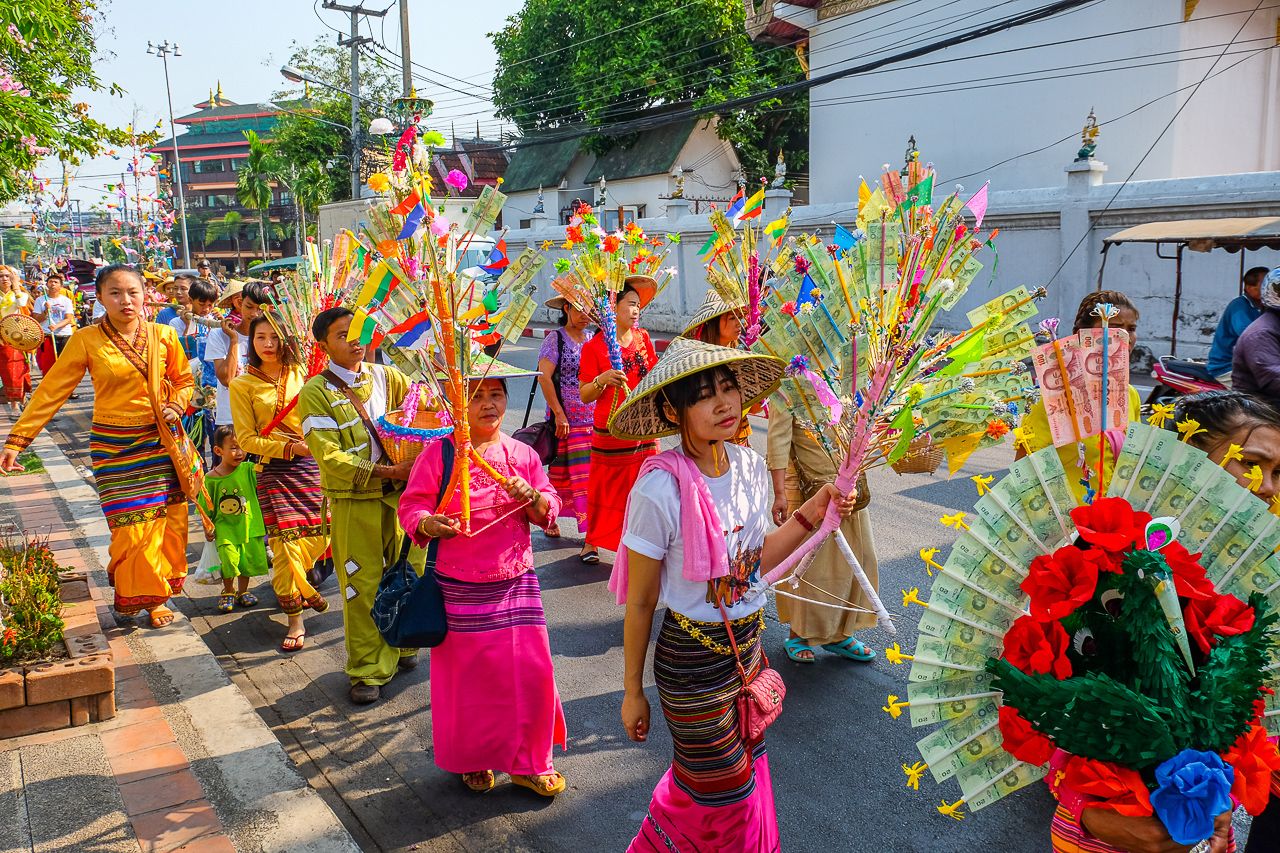 While the attendants stomp and spin to the music, the young boys cling on to their carriers, their gazes fixed in the distance. With their pale, powdered faces and inanimate expressions, they seem more like life-size dolls. As the festivities progress, the umbrella bearers become less conscientious, and trickles of sweat emerge from beneath the boys’ headdresses when they are exposed to the sun’s glare.

Even sitting on someone’s shoulders can get tiring in the summer heat, and the children’s faces light up at the sight of a can of Coke or any other refreshment offered. Cheering and exhausted, the parade finally returns to the temple, and the boys pay their respects to the monks while the relatives follow with generous gifts.

And finally, the ordination

After a night of partying which includes a special feast for the boys and flirtatious songs for the adults, on the third day the boys enter the main hall of the temple to ask permission to be ordained from the senior monks. Once accepted, it is time for the symbolic casting off of vanity and materialism. 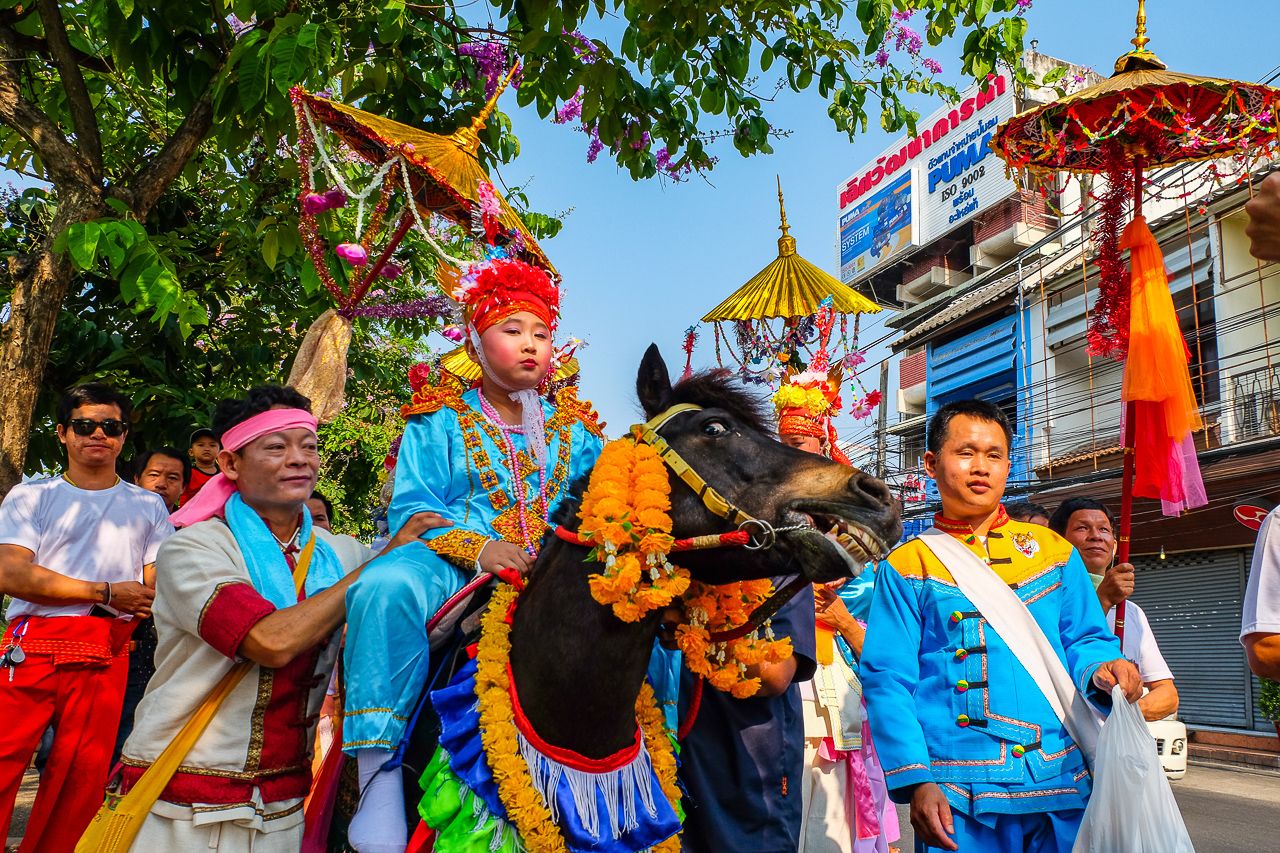 With the help of their attendants, the boys remove the lipstick, powder, and delicate facial designs, along with the sumptuous clothing, in order to put on the saffron robes provided by their parents. All Buddhists believe that for a son to be ordained into the monkhood bestows the highest merit on the parents, so this is a proud moment indeed. For the novices themselves, memories of the royal treatment during the past few days and the communal joy of Poy Sang Long will probably stay with them for the rest of their lives.

Where to see Poy Sang Long

The largest Shan communities in Thailand are in Chiang Mai and Mae Hong Son, where the festival usually takes place in late March or early April. Due to the coronavirus, the festival has been canceled in Chiang Mai for 2020. It will go ahead in Mae Hong Son, but only in its essential elements, meaning no parade and events will be specific to the families of the novices.

During the festival, the families of novices from outlying villages take up residence in the temple compound. If you do visit, be sensitive to current concerns about the coronavirus and keep your social distance.

However, the festivals should go on normally in 2021, which gives you plenty of time to plan to attend.

TravelThe Best Place To Go in Thailand for Every Type of Traveler
Tagged
Festivals Narrative Religion Thailand
What did you think of this story?
Meh
Good
Awesome

May 2, 2022 Morgane Croissant
✖
travelstoke
Download the mobile app
stoked by