I’m surrounded by the Sierra Cacachilas in Baja California Sur, Mexico, eating a trio of cheeses with wild cape plums prepared two ways: pickled and preserved. To my left is a pen filled with goats who produced the milk to make the cheese. Straight ahead, the branches of a tamarind tree bow toward the gate to an organic garden. The pods that hang from its long limbs were used to flavor the tart, earthy water I’m sipping. To my right, in the distance, I can retrace the tracks I’ve just left on a desert trail where I learned to identify the wild cape plum tree, the healing lomboy tree, and the giant cardon cactuses that have been standing sentinel over these lands for centuries.

This is an afternoon at Rancho Cacachilas, a 34,000-acre eco-ranch about two hours north of Cabo San Lucas, whose namesake shrub I also encountered on that morning’s hike. 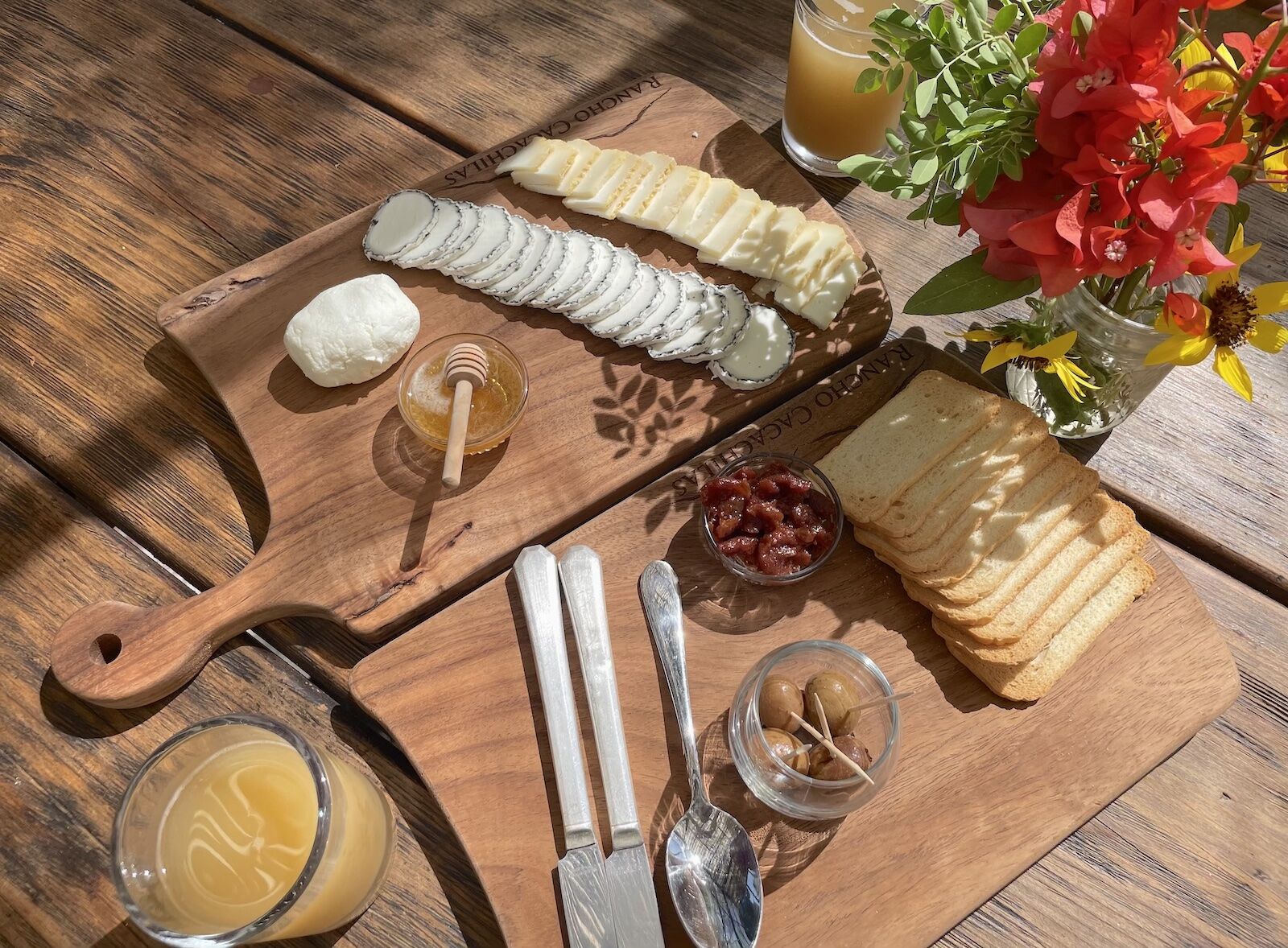 Technically, Rancho Cacachilas is a network of ranches. Cheese tastings are held at Rancho Dos Hermanos, whose creamery produces seven goat cheeses including a traditional panela that guests can learn to make during an artisanal cheese workshop. For most overnighters, Rancho Chivato is home base — with eight safari-style glamping tents, four rustic resort suits, communal spaces for mealtime and downtime, and a pool that points toward the Sea of Cortez — although guests can also sleep wild at the Los Pisos wilderness camp.

The majority of the food that’s served in Rancho Chivato’s al fresco dining room is grown down the road at Rancho Gaspareño, the eco-ranch’s reception area, which also stables its mules and horses and hosts monthly ranch-to-table culinary events. 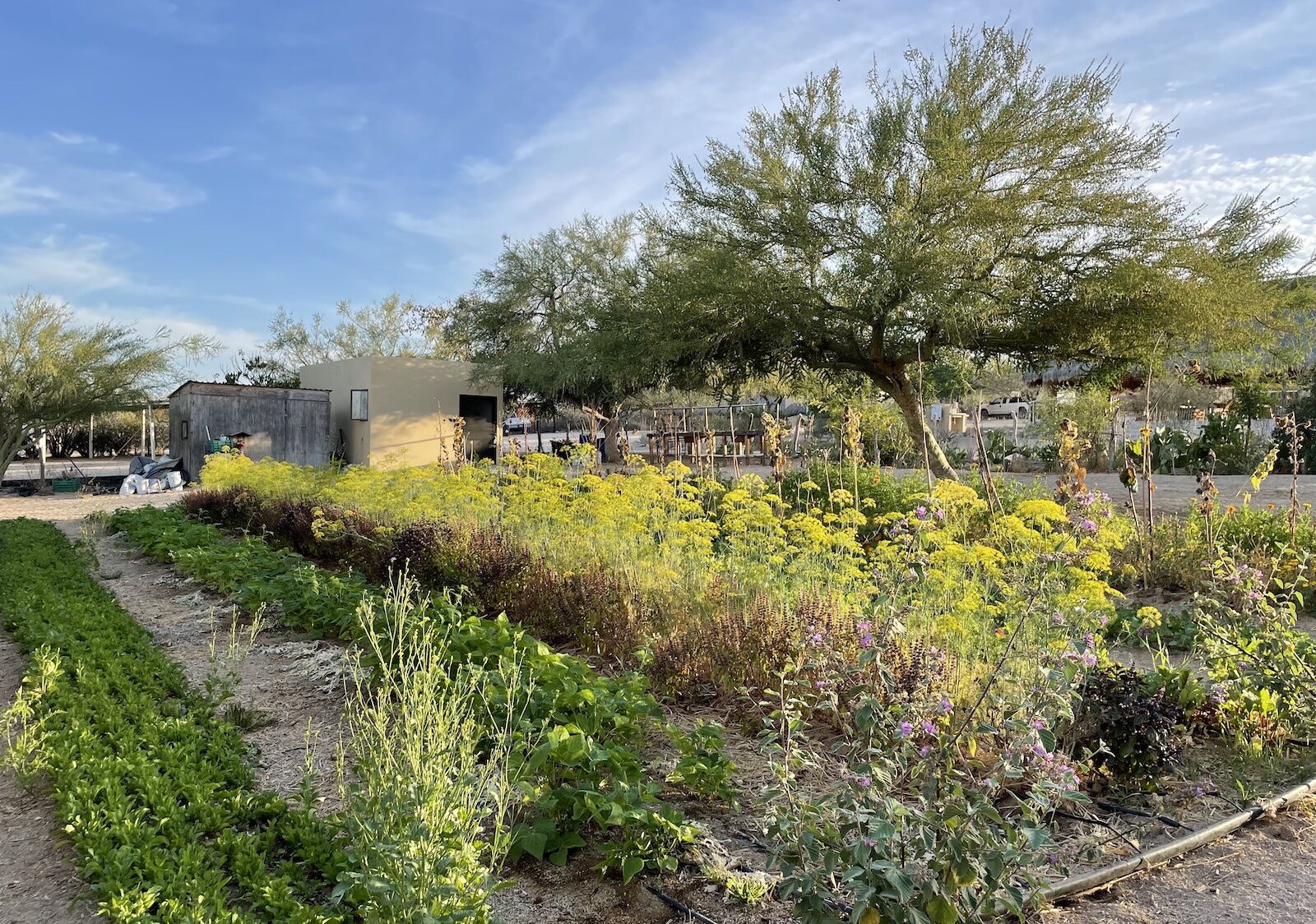 Between ranches, 40 miles of hiking and mountain biking trails crisscross the property, and there are more trails underway. Mountain bikers, in particular, have come to regard Rancho Cacachilas’ singletrack as some of Mexico’s finest, anchored by the six-mile Santa Rosa Trail that was designed by the International Mountain Biking Association.

On Saturdays throughout the year, this same singletrack opens up to trail runners who meet at the eco-ranch’s Bike Hub in the nearby windsurfing town of El Sargento before being shuttled to various trailheads. The most formidable race in the series is the Don Diablo Trail Run, which is split into 35K and Ultra 54K marathons every November.

The whole solar-powered plot is owned by Christy Walton — of the Walmart Waltons — who established Rancho Cacachilas to restore the area’s ecological and cultural heritages. 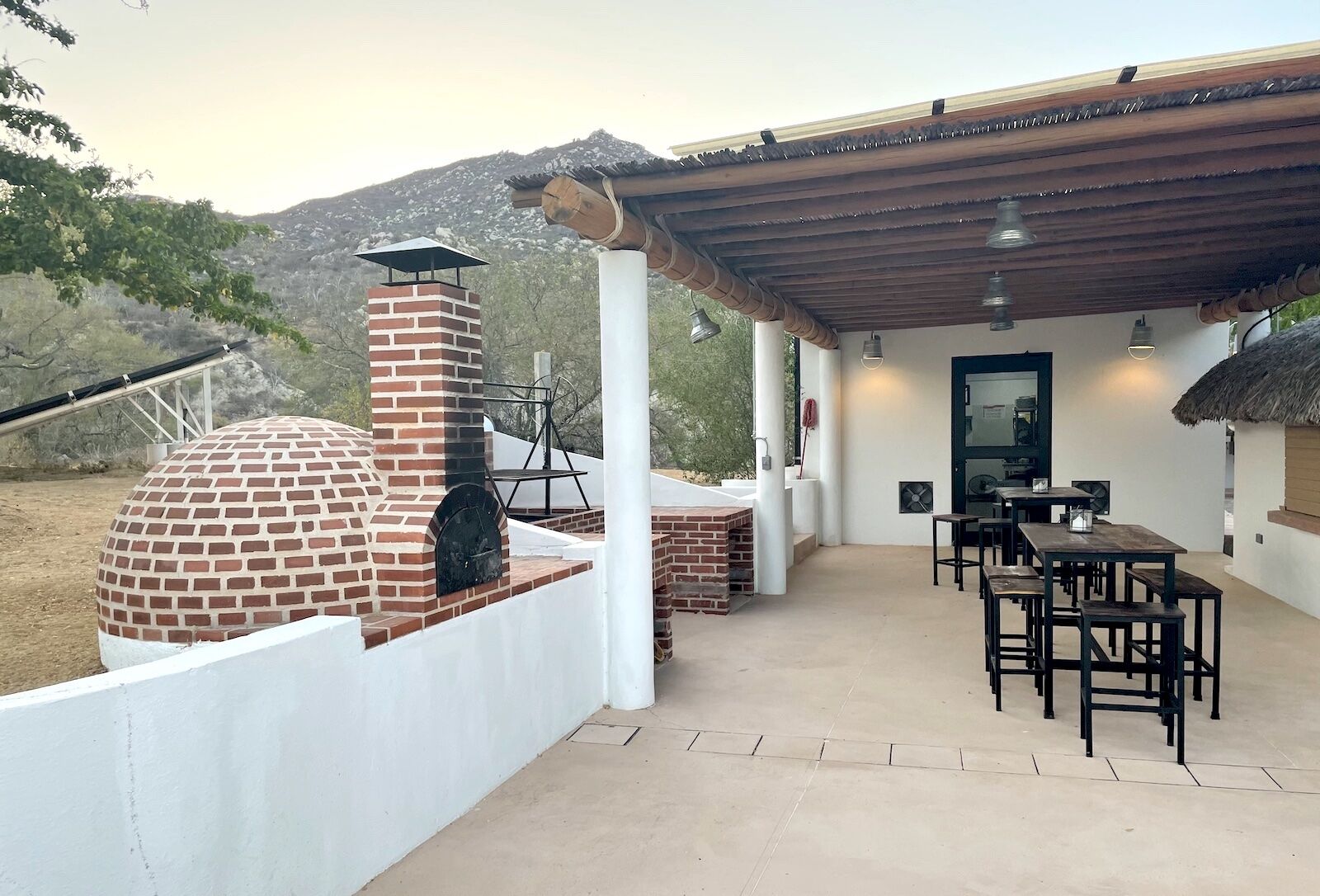 “There’s no money in ranching,” says Sebastián Del Valle, my guide during my two-night stay at the eco-ranch. Del Valle explains that most of the locals who can afford to send their kids to Mexico City or abroad when they’re older do so to provide them with better opportunities. “Here, ranchers get paid 300 percent more … so we’re helping the community rebuild their ranches, go back to their roots.”

Guest workshops from beekeeping and cheesemaking to permaculture and livestock management are also available to locals, who represent 80 percent of the eco-ranch’s workforce. In the case of foreman Joaquin Geraldo, the property’s longest-standing employee, Rancho Cacachilas has become a multi-generational family employer. His sons now works as a bike mechanic at the Bike Hub and fills in as a guide when needed.

Tourism was a secondary objective for Walton. Rancho Cacachilas began taking shape 14 years ago but only opened to guests five years ago. Before that, the property primarily operated as a base for researchers from the San Diego Natural History Museum who continue to study the region’s wildlife and natural resources today. Yet tourism to the Sierra Cacachilas seemed inevitable as interest in La Paz, the state capital about 40 minutes southwest, ballooned. 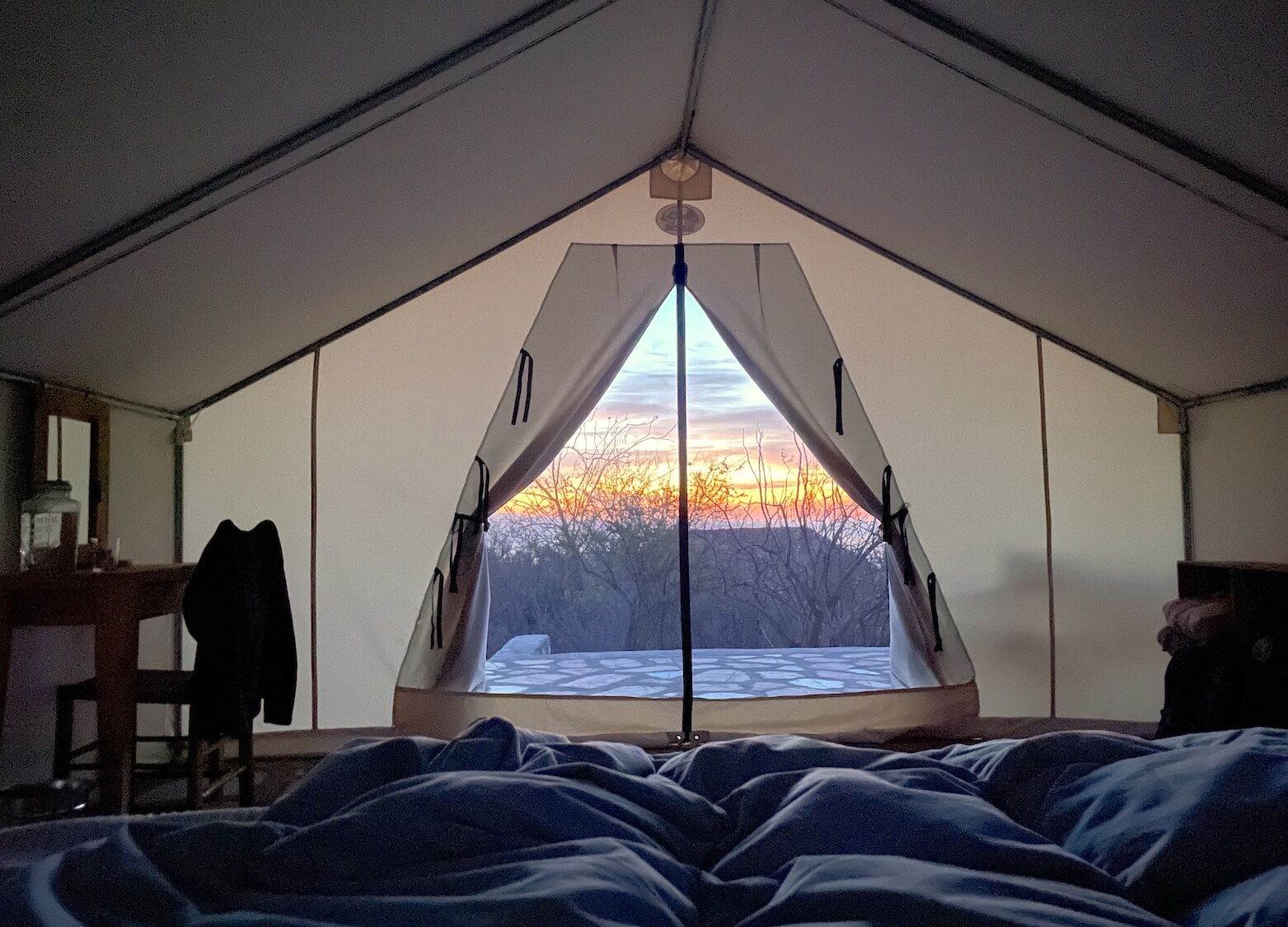 “That’s how tourism started here,” says Del Valle. “It was just grabbing tourism by the hand and growing together, not just in a sustainable but a regenerative way.”

Hearing Del Valle explain that sustainability is no longer a sufficient model for tourism, that the goal of the eco-ranch is to actively regenerate the land it occupies, it’s hard to picture a better spokesperson for Rancho Cacachilas — both equally rugged yet refined. But Del Valle had reservations before accepting his position as a guide.

“I didn’t want to work here if all of the money would go to Walmart,” he tells me over a plate of mixed vegetables from the eco-ranch’s garden, roasted chicken thighs, and mole during my last lunch at Rancho Chivato. “But actually it’s the other way around.” 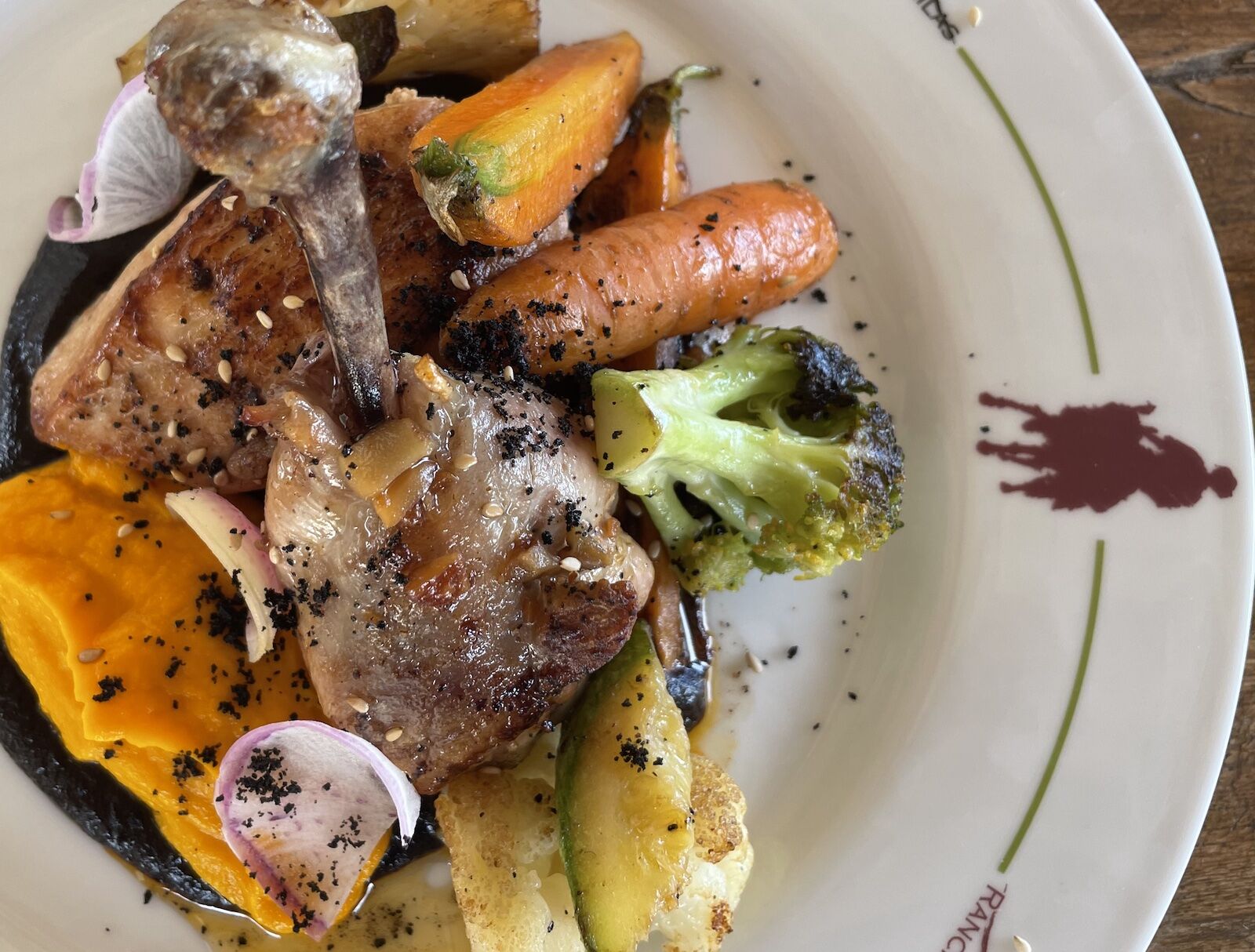 Rancho Cacachilas is just one leg of iAlumbra, a Walton-founded alliance of Mexican businesses that’s committed to creating “environmental, social, and economic improvements” that are both serviceable and enduring in communities across the country. In addition to the watershed restoration, holistic ranching, permaculture, and community outreach taking place on site, Rancho Cacachilas also partners with two of iAlumbra’s aquaculture ventures—Sol Azul, one of Mexico’s leading oyster farms, and Earth Organic Farms, the first hatchery in the world to breed Pacific red snapper—to supplement the meals served to guests.

The eco-ranch has yet to turn a profit, in part because the COVID-19 pandemic curtailed its momentum as a touristic undertaking. But according to Del Valle, that’s okay.

“This ranch is not for money,” he says. “It’s for the ranchers.” 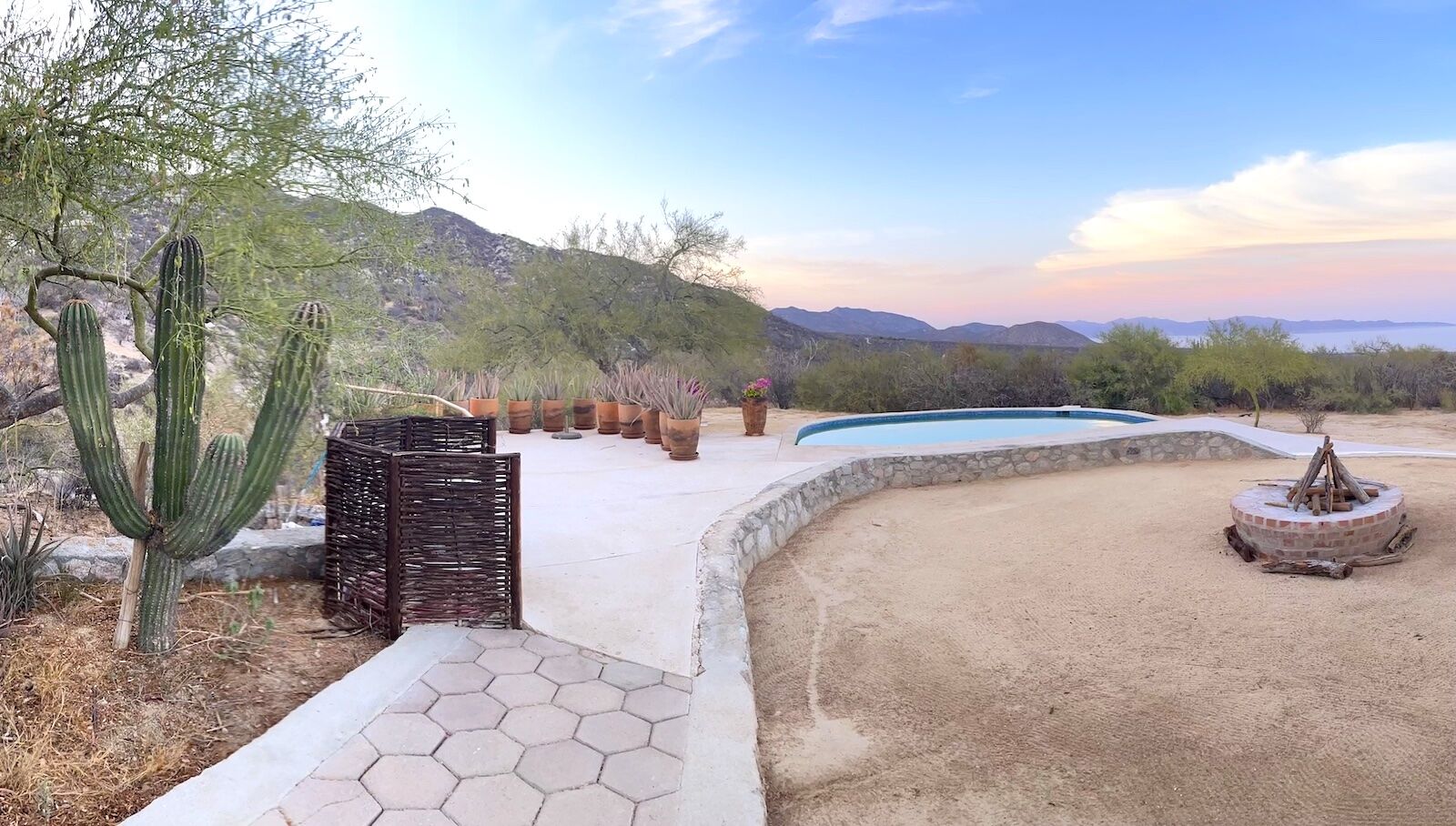 The irony is that Rancho Cacachilas is an experience adventurers would be remiss to skip. It only takes one night of stargazing by the firepit at Rancho Chivato, or a morning of sunrise yoga on the rooftop of the resort rooms, to see that — as long as you’re the type of traveler who’s comfortable taking warm bucket showers before cocktail hour.

At roughly $300 per night, glamping at Rancho Cacachilas is not the cheapest way to bum around Baja California Sur. But you’d be hard-pressed to find a more exciting, educational, beautiful, and beneficial property to give your hard-earned vacation dollars to.

Epic StaysHilton’s Vallarta Riviera Will Change Your Mind About Booking All-Inclusives
Tagged
Epic Stays Mexico
What did you think of this story?
Meh
Good
Awesome