Fewer than 200 years ago, what is now the mega-metropolis of Hong Kong was little more than a couple handfuls of fishing villages scattered around the base of mountainous islands. Today, the average tourist can be forgiven for focusing their attention on the Special Administrative Region’s sun-reflecting, monumental glass structures.

Yet the intrepid traveler who can look beyond this mesmerizing, skyscraper-clad facade will be surprised to find that less than one-quarter of the SAR’s land has been zoned for development. Already, those who tram their way to the top of Hong Kong Island’s Victoria Peak marvel at how much of the area is covered in greenery. This, however, is only the tip of the iceberg.

A little farther away, just beyond the bowl of mainland and island mountains where the bulk of Hong Kongers congregate, you can hike for hours without bumping into another soul and spend days not seeing a single skyscraper.

Leaving the big city behind 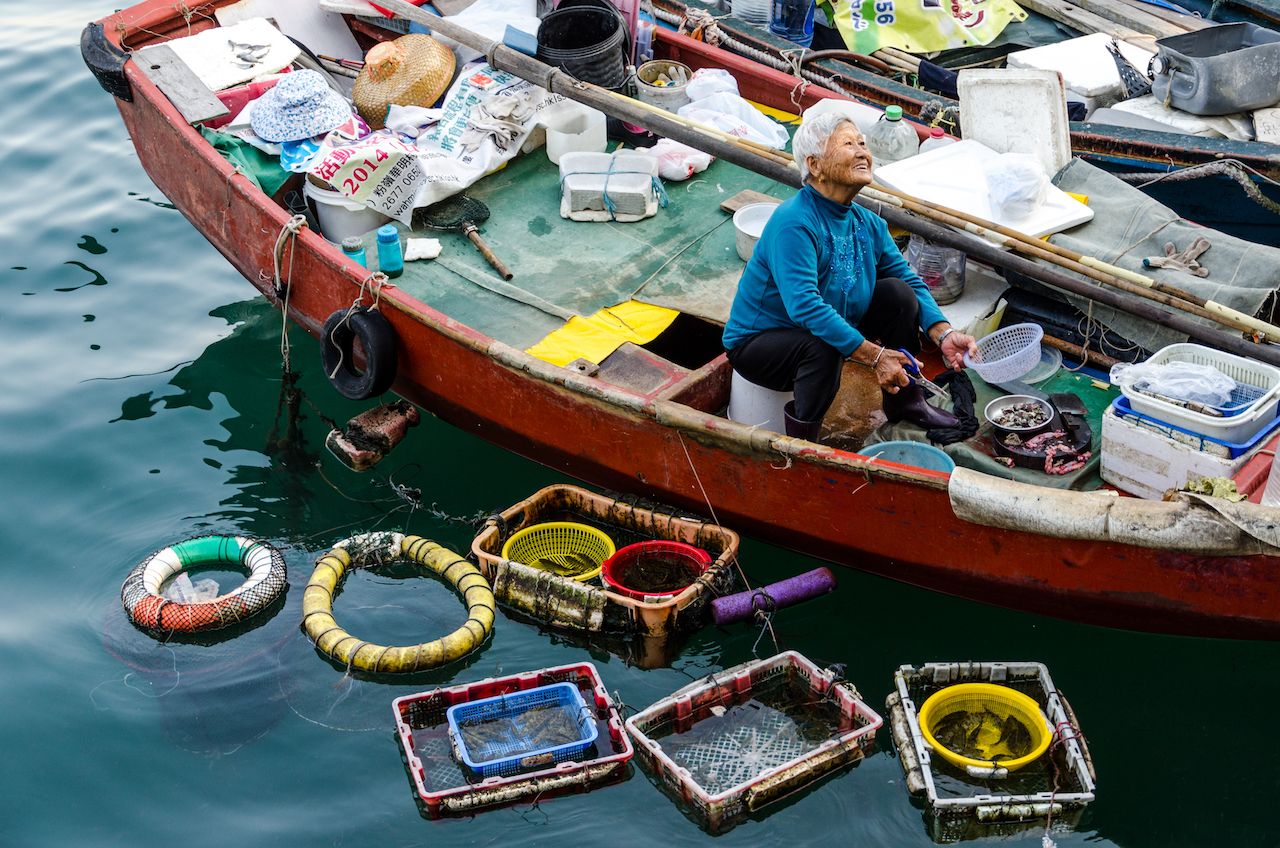 From the Mass Transit Rail (MTR) station aptly named “Central” you’ll need to make one train change at the Mong Kok platform to get to Diamond Hill station. There’s a bus terminal above Diamond Hill where you’ll find city bus No. 92 waiting to transport you away from the stereotypical city atmosphere to a quaint seaside town famed for its fresh seafood, Sai Kung.

Fishermen and women sell their catch of the day from small boats, locally known as sampans, while tourists enjoy a sumptuous feast at any one of the many waterside restaurants. It’s a fine place to fuel up for the immensely wild adventure ahead.

Sai Kung town sits on the edge of Sai Kung Country Park, a vast swath of wild rainforest, sharp peaks, and stark coastline that make up one of Hong Kong’s largest nature reserves at over 17 square miles. Minibuses service all corners of the park, at least hourly throughout the day, and can be found idling at their station near the town’s waterfront. Drivers of this miniature public transportation have developed the uncanny knack of making beat-up buses travel at Formula One speeds around even the tightest of bends. Jump into Minibus 7 and hold on tight as civilization fades fast behind while the countryside warps by in a verdant blur. 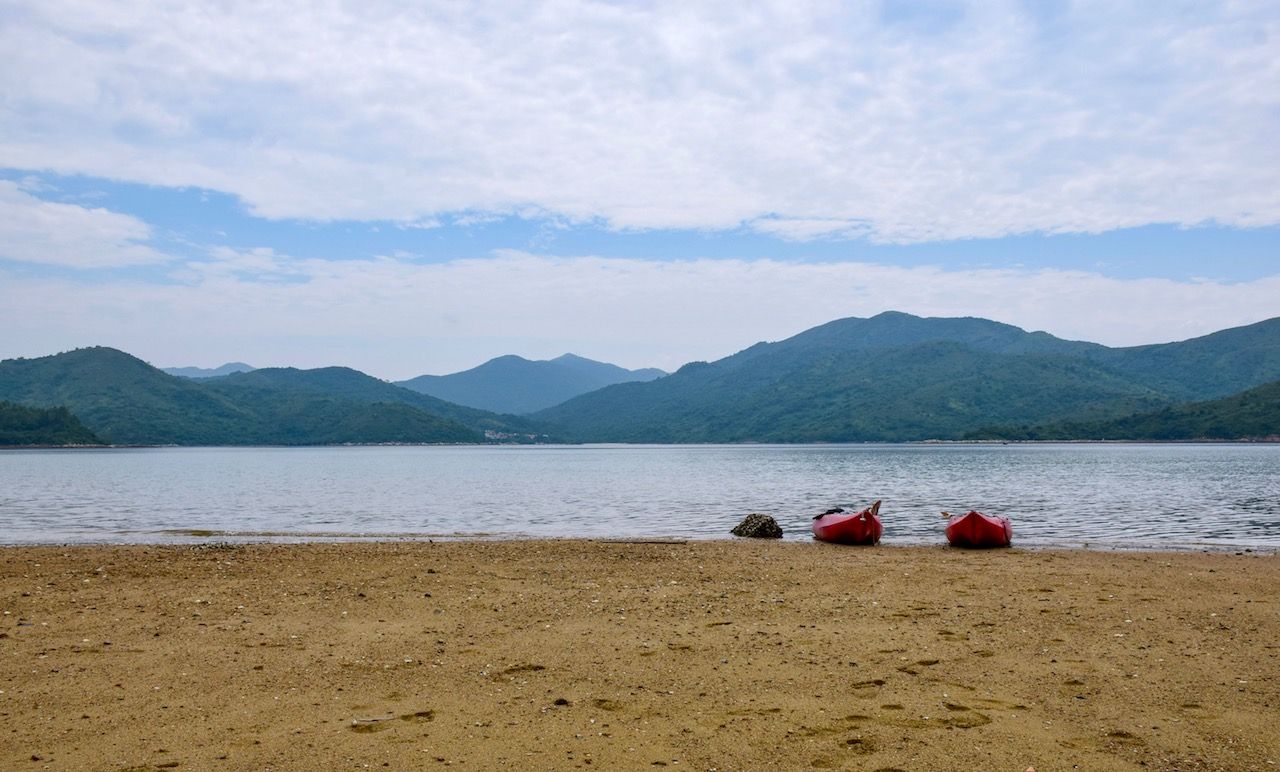 In under two hours and for less than the price of a beer at Ozone, Hong Kong’s highest bar, you’ve been transported to the majestic marine park of Hoi Ha Wan in the far northwest of Sai Kung Country Park. From here, the untamed coastline stretches eastward before dropping south and eventually curling back around to the west. The cape is entirely accessible by a network of crisscrossing hiking trails.

Minibus 7 terminates its route at the end of a quiet road shrouded by hills and punctuated with a home or two. One of them is owned by Celina, a local who has operated her house-cafe for decades, serving milk tea, or cha chow, a creamy yet bitter local delicacy, along with hot food and chilled beer. She serves these in an outdoor setting, shaded by the surrounding forest and to the soundtrack of its animals.

A short stroll down an overgrown path, just past Celina’s rental kayaks, the world suddenly erupts into one of its most impressive views. Hoi Ha Wan’s bay is the size of a football stadium, hugged by natural stands densely populated with shrubbery, that overlap to form an area protected from the ocean. This marine conservation park is as big and beautiful as it is pristine. It’s easy to sit for hours on the white-sand beaches and marvel at your luck having stumbled upon paradisiacal perfection. 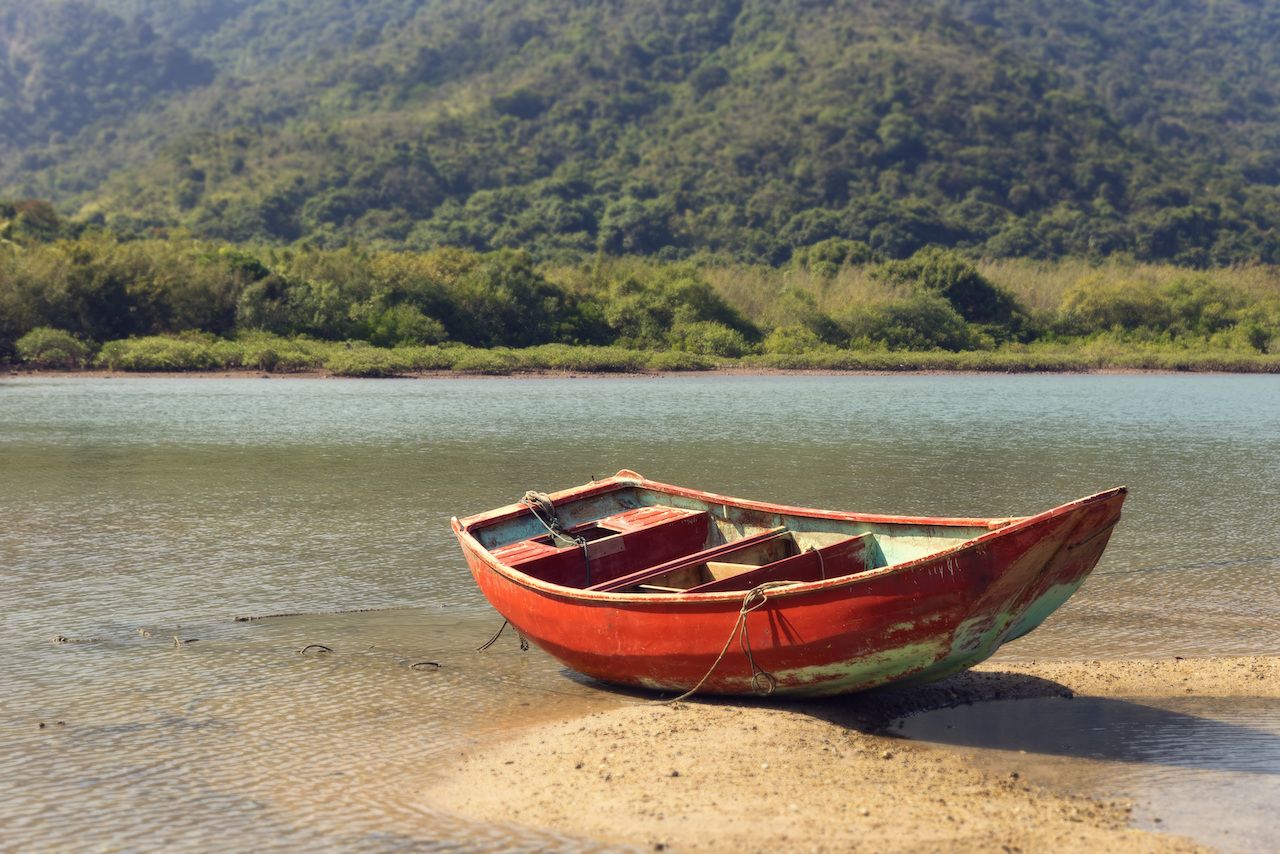 The hike between Hoi Ha Wan and Chek Keng will take two hours (at a strong pace) along challenging steep trails that are thankfully well maintained. Your energetic efforts will be rewarded, at least every 15 minutes, with stunning vistas of sparkling emerald seascapes. On weekdays it’s unlikely you’ll bump into many other people, but on public holidays be ready to greet the other friendly local hikers with a smiling nod and a neih hou, or “hello,” which will almost always be reciprocated.

Chek Keng village, once home to the ethnic Hakka Han, is only accessible by foot or ferry. The Hakka left over 50 years ago, abandoning their family homes in search of a better quality of life in the rapidly modernizing outside world. Poking your head through glassless windows and doors permanently ajar is enough to get a crumbling snapshot of what life was like on the idyllic mangrove shore. Many of the household relics sit awaiting total burial in the collapsing rubble of walls and roof.

Setting out on a hardcore hike 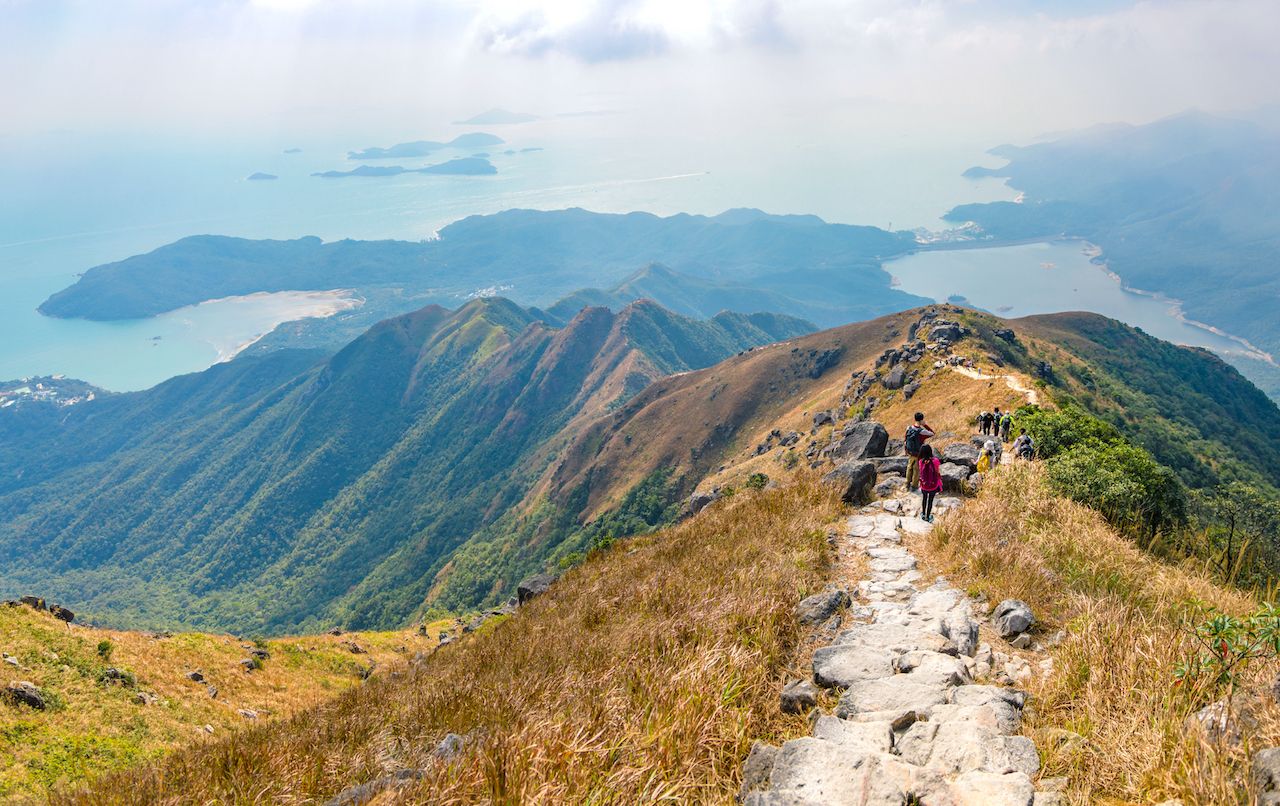 Beyond Chek Keng, the hiking trail climbs at a steep incline that’s hard for even the most accomplished hiker to summit without taking a break. The main trail peaks in an anticlimactic fashion, thanks to the all-encompassing and view-blocking rainforest. Before the trail starts to dip, those in the know will look for a dirt trodden path off to the left. Pushing through overgrowth for a couple of hundred meters is well worth the prize: unparalleled 360-degree views of Sai Kung’s stunning countryside.

Trek further still and the landscape rises to its highest point, 1,535-foot Sharp Peak. The rainforest gives way to the elements as only grass can grow on the wind-and-rain-battered flanks. There is no path on which to continue except the scarred routes of landslides. The loose rocks make for a hard scramble in even the driest and safest of conditions. Unless you’re skilled in bouldering or climbing, my advice is to enjoy the incredible view offered just a couple hundred meters off the main path. 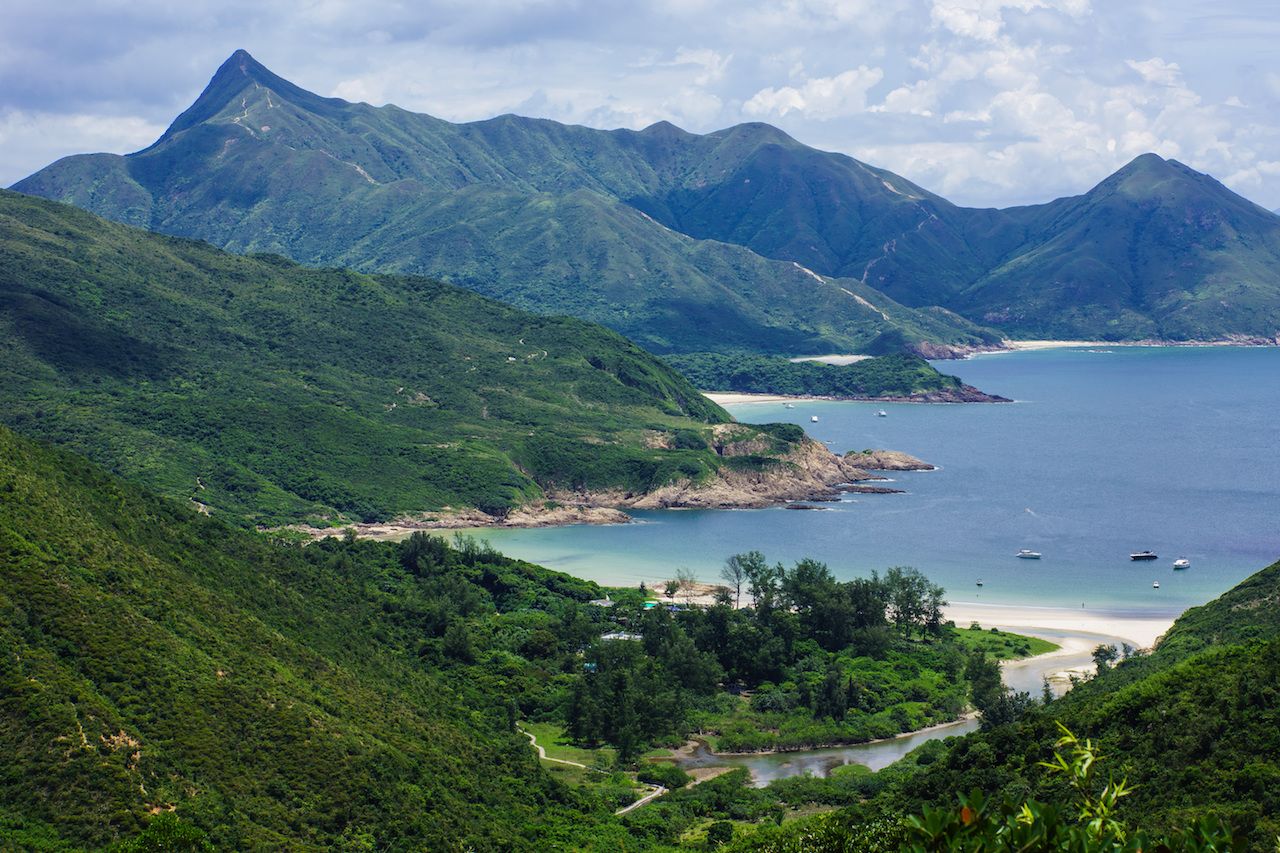 Looking westward from the direction you came, the natural wonders of Chek Keng and Hoi Ha Wan appear lake-like, protected by overlapping green arms of rolling hills. But, to me, it’s eastward and forwards that provides the most spectacular, paradoxical view of Hong Kong. The coastline is like a four-pearl necklace, divided into segments by dense, vivid green rainforest, and lashed at by the year-round waves crashing in off the open South China Sea.

In the deepest wilds of Sai Kung country park, cloaked by the late-afternoon shadow of the highest mountain, there’s another rainforest-encroached fishing village for which Google Maps has no name. Many of the higgledy-piggledy homes now lie in a state of disrepair, while at least one family remains year-round. In the hotter summer months, they open their doors to sell drinks from the fridge to those who make the arduous hike over a sun-blocking Sharp Peak. 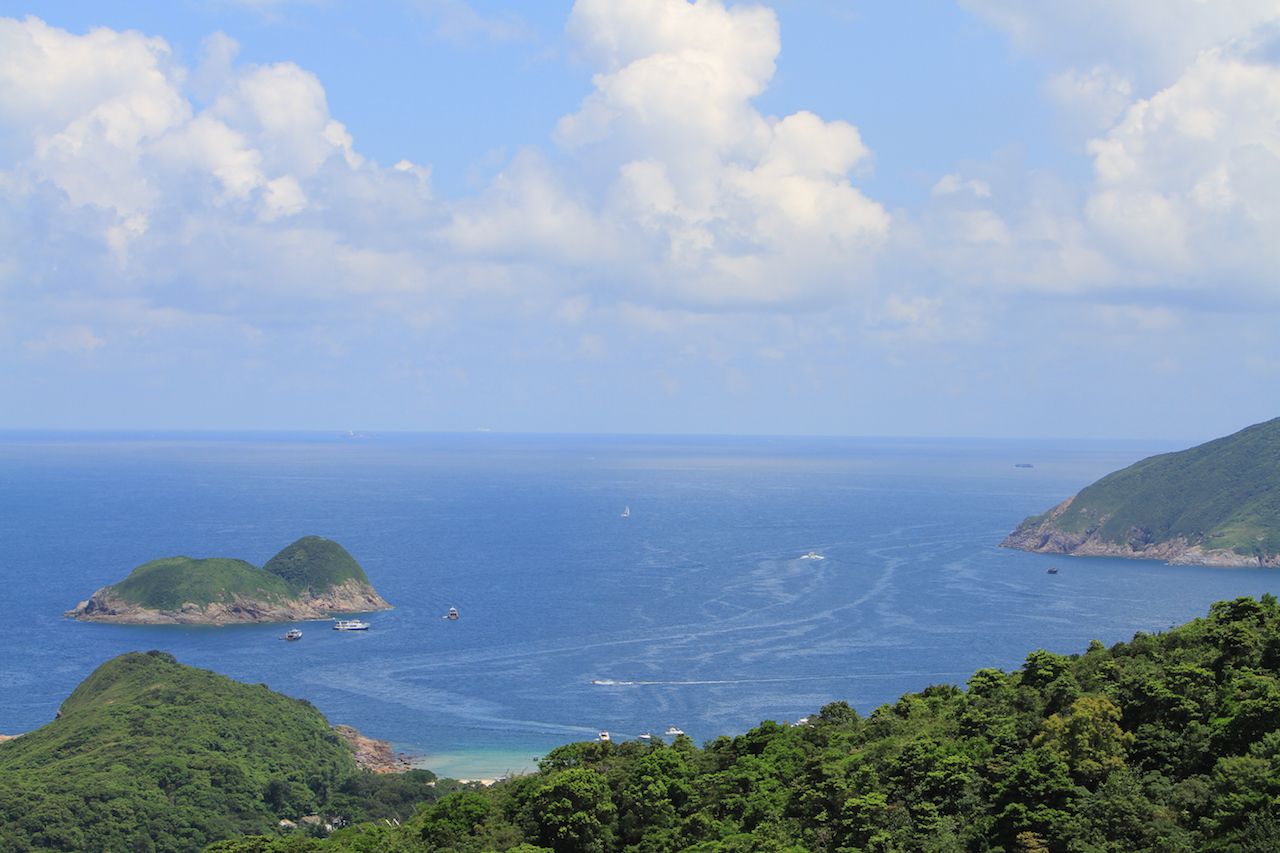 Onwards, the well-maintained hiking trail continues in one direction. Splitting off into dense vegetation, a dirt trodden path beckons the adventurer deeper into the forest. Before long you’re balancing on fallen logs and striding between uneven stepping stones in the slim hopes of avoiding squelching through festering swampland. Brushing past vines, it’s best practice to keep an eye out for native cobras, pythons, and venomous giant centipedes that frequent these lesser-walked paths. After approximately 15 minutes, mother nature spits you out in the middle of a jaw-dropping stretch of beach. Even the most widely traveled beach lover will agree, Tai Wan Bay is an ample reward for braving any potential fauna dangers.

Even on busier public holidays, such as Cheung Yeung festival weekend in mid-October, it’s still relatively easy to find a quiet slice of paradise along the expansive wraparound bay. Counterintuitively, China’s long-distance-travel-jamming public holiday, Chinese New Year, dissipates the usually bustling epicenters of human activity when many workers return home to the Chinese countryside. So if you want to explore Hong Kong’s many wonders at their quietest, settle in a couple of days prior to Chinese, or Lunar, New Year. 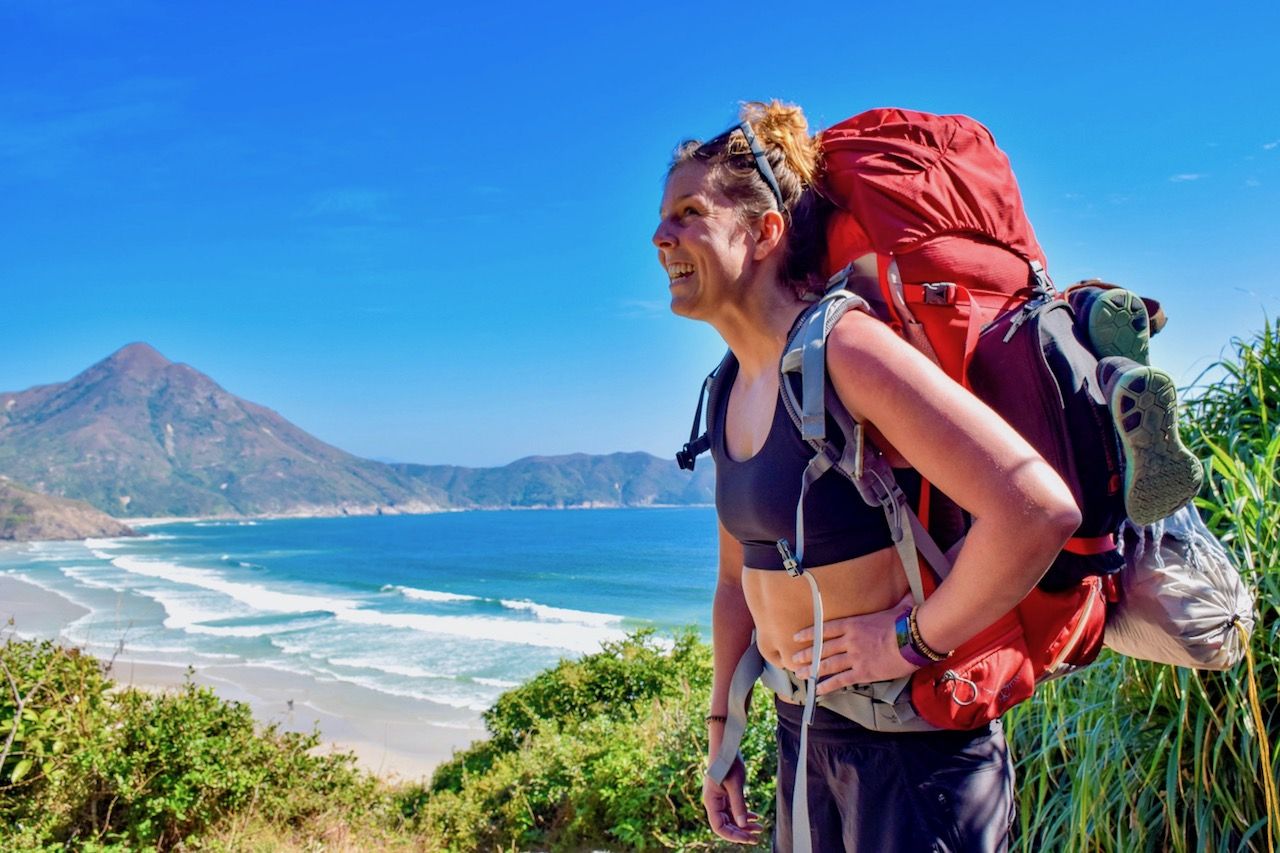 Magnificent birds of prey soar above Tai Wan, their wings motionlessly riding updrafts ramping up the valley’s steep cliffs. For them, it’s easy to access what is quite simply one of Asia’s best beaches. But for those on foot, it’s a hard slog through overgrown wild boar tunnels before slipping and scrambling your way up and down steep mudslide tracks high above the jagged, surf-dashed coast — an arduous natural hike not for the fainthearted or unsure footed.

Like the moat guarding a magical kingdom, a steady freshwater stream greets all that wish to enter the naturally protected bay of Tung Wan, just north of Tai Wan beach. Splash some of the refreshing mountain water on your face before stumbling across the ravine to discover a surreal world. The bushy banks were once tamed by an unknown people seeking a very remote way of life. Pockets of grassland, perfect for pitching a tent, roll far back into the cradle of towering scree-scattered walls. In each section of seemingly still manicured grasslands, the patchwork of bushes opens a little to offer a million-dollar view of what, on most days of the year, will likely be your own private, idyllic bay.

Bamboo beach bars on the sand and stars above 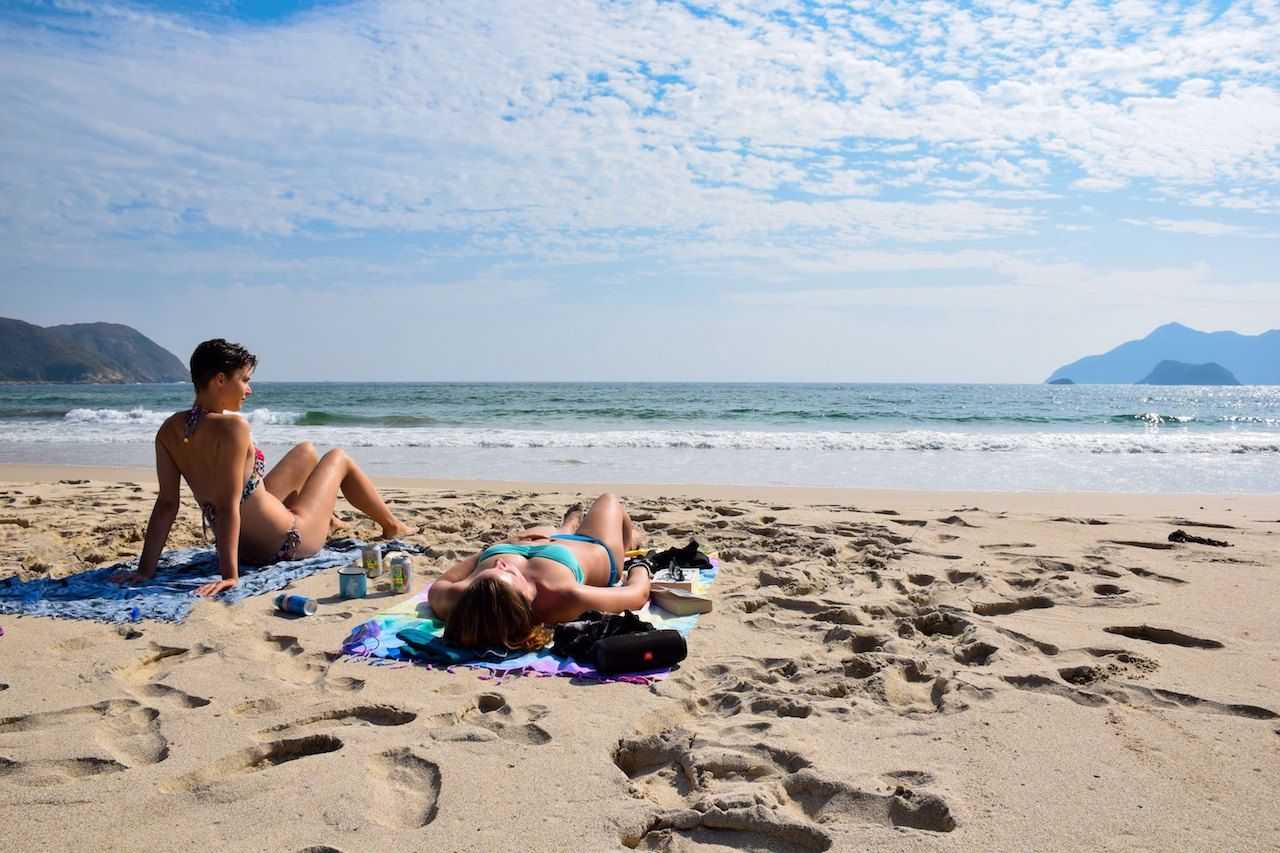 If you’re not staying overnight, don’t leave it too late to start heading back, unless you’re prepared with night-hike gear. If you’ve got headlamps and spare batteries, enjoy the temperate journey under a dazzling array of stars, untempered by street lamps. Heading back during the stifling heat of a midsummer day, across the energy-sapping, burning hot stretch of Tai Wan sand, you’re naturally obliged to take two cool-off dips in the surf. At the long beach’s southernmost point, you’ll have to cross over another headland. This five minute, well-trodden path is made relatively easy by permanent guide ropes to aid over steep sections.

Reaching the other side, known as Ham Tin, you could be forgiven for thinking you’ve stumbled into a mirage. No need to fear sun sickness just yet though. Pull up a chair under one of two bamboo beach bars and thoroughly enjoy your well-earned chilled beverage while marveling at the juxtaposition between Tai Wan and Ham Tin. Here, along the much busier shore, you’ll often spy a plethora of luxury yachts bobbing just beyond the wave line, their captains waiting to deliver any number of boat party revelers from the bay straight back to civilization. 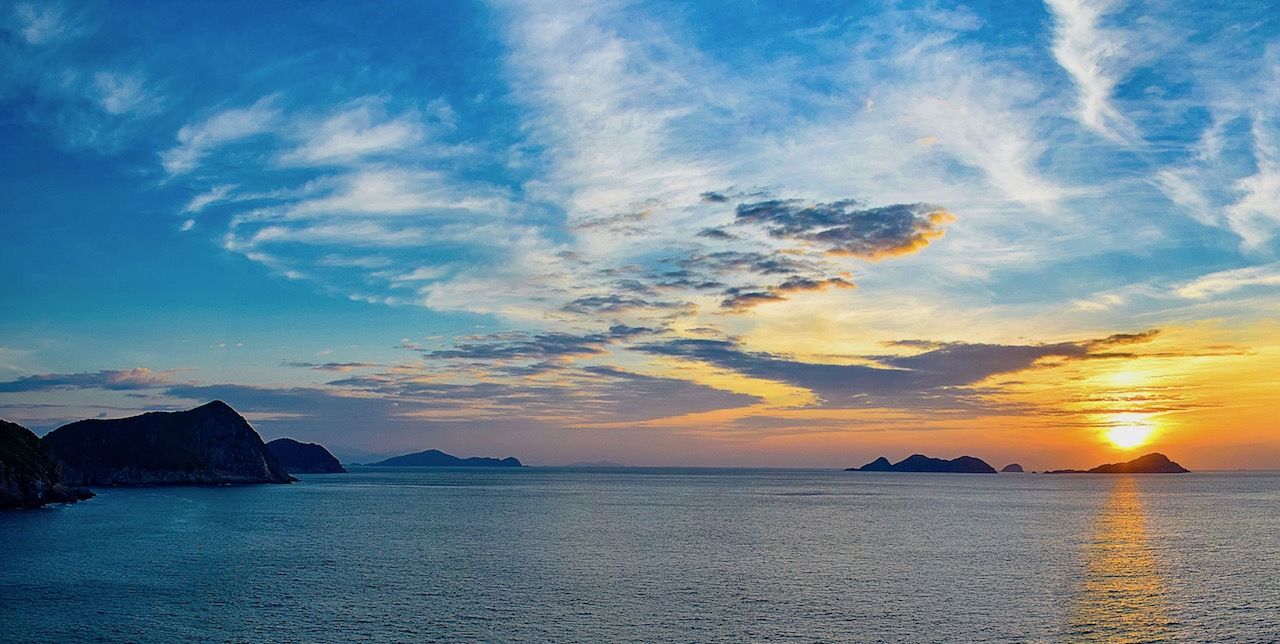 On weekend days drenched in sun, Ham Tin is bursting with a sea of closely parked tents. If you’re looking to camp with family, it’s highly recommended that you pitch as far away from the northern point’s bars as possible. This is where the younger, more rambunctious crowd likes to camp, and they won’t tone down their fun for anyone at any time of night. Yet, they’ll almost always offer a beer and some good company.