Derby culture is hat culture, and everyone gets involved — high society women, those who wish to be high society women, and, increasingly, men. Those who aren’t wearing something over the top are often gawking at hats with brims so wide you wonder how they fit through the door. For months up to the first weekend in May when the race takes place, anyone with a passing Derby interest has more than a passing thought about hats.

“People love checking out the fashion,” Rachel Collier, the interim communications officer at the Kentucky Derby Museum, tells me over email. “Around Derby time, ladies always get the question, ‘Do you have your hat yet?’ At the Kentucky Derby Museum, in our ‘It’s My Derby’ exhibit, we showcase some of the most gorgeous, stylish hats down to the outrageous, like a hat topped off with a Barbie doll.”

The hat obsession in and of itself isn’t weird. Americans have passing obsessions with much stranger things. Beanie Babies, for example. What is weird is that there’s not a moment in time that anyone can point to and say, “This, this is when gaudy Kentucky Derby hat culture started.” Instead, it just sort of happened, and we all accepted it as the norm. Part of the reason, however, can be traced back to the fact that rich and fancy has been a part of the Kentucky Derby ethos since the first race in 1875. 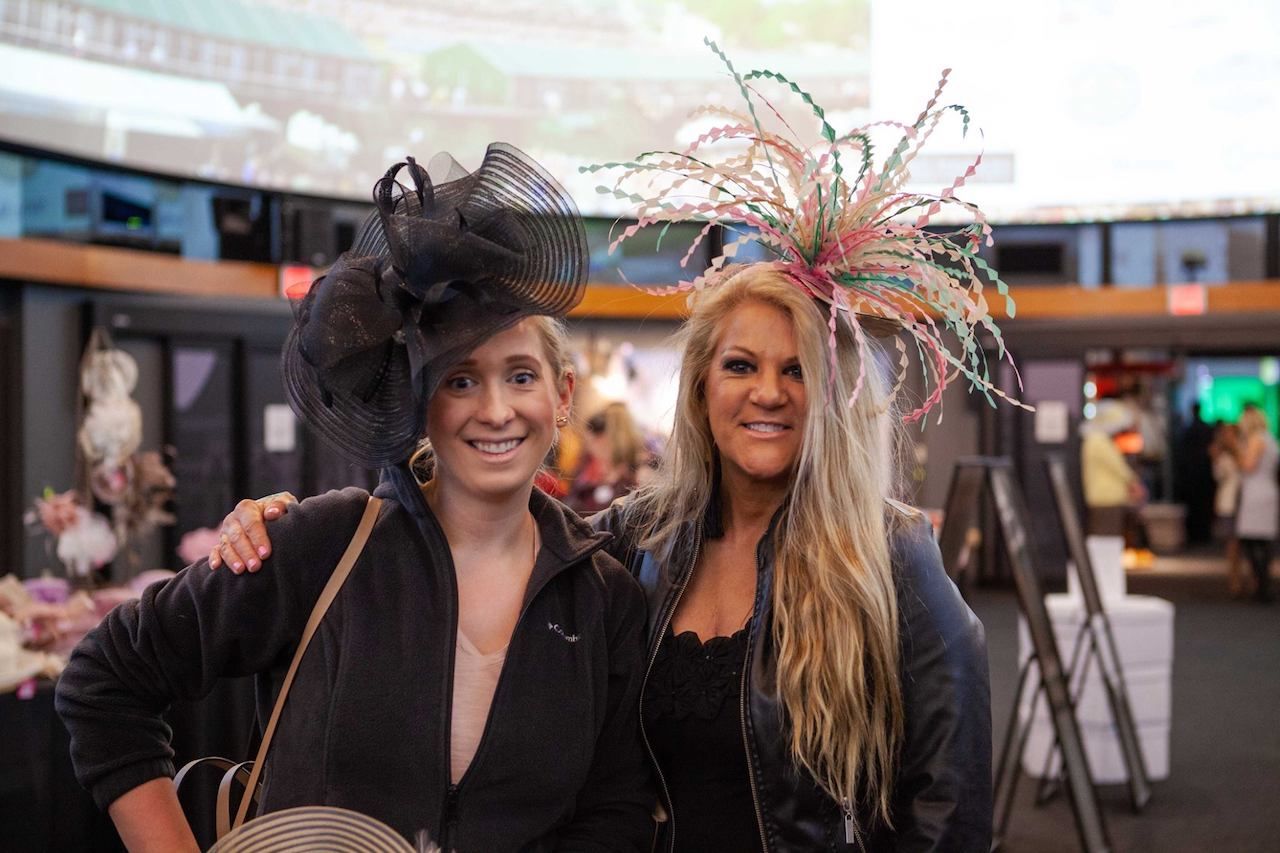 Col. Meriwether Lewis Clark Jr. started the Derby with the intention that the monied class would attend. He envisioned a horse race more like how they were done in Europe at the time with people dressed in their best. Horse racing in America was linked to gambling and drinking, both of which are decidedly not classy and didn’t create a women- and children-friendly atmosphere. So Clark went on a campaign with his wife before the first racing gates opened to persuade the people of Louisville that this race was something different. The first order of business: Tell everyone that they were having a picnic at the tracks and to wear their finest attire.

As the Kentucky Derby Museum puts it, Clark “used high-class women to recruit his target clientele to attend the race,” and “the event quickly became just as much about the fashion as the racing.”

Yet the race struggled to keep that level of noted posh in its first decades. The first connection between the Derby and hats in newspapers from the era was in an 1889 story about a horse gambler who “returned from the effete east” wearing “a weather-beaten Kentucky Derby hat.” By the 1920s, hats were in the spotlight — but not for the reason you might think.

One advertisement from 1922 reads, “Some People Think the Kentucky Derby Is a Hat — but we know it means Straw Hat Day.” And the reference wasn’t unique. The Seattle Star published a column in 1922 about how stupid “Dumb Bell Dud” is, and one of the jokes is that he’s so dumb he thinks the “Kentucky Derby is a hat.” The same joke was used to disparage a New York actress in 1935 by inferring her cluelessness by saying that “she thought the Kentucky Derby was a Southern gentleman’s hat.”

Time magazine first briefly referenced Derby hats in 1926 when talking about the crowd’s reaction as a racehorse passed. The story talks about them more as an expected attire, though, not as something out-there enough to warrant calling out. So normal that, in a 1925 story in the Washington Post, the most notable thing is that the hats were soiled. The writer wrote that rain ruined women’s “leghorn hats, pink Milan hats, large white felt hats and just hats” and how at the end of the race, “thousands of dollars worth of beautiful clothing had been ruined and thousands of equally beautiful women were miserably unconformable.”

There certainly weren’t any stories in the papers about the 30 craziest hats like there are in publications today (even publications devoted to sports like ESPN). The confusion between the Derby and a derby hat was somewhat explained in a 1951 column called “Take My Word For It” by columnist Frank Colby.

“The English derby (pronounced: DARH-bee), an annual race for three-year-olds, was first sponsored in 1780 by the then Earl of Derby. Later, when the Kentucky race was instituted (1875), the term Derby was used for the annual race (sic). But the pronunciation was changed to DER-bee. The derby hat was also named for the earl, but in England, the hat is now called a bowler (round, like a bowl).” 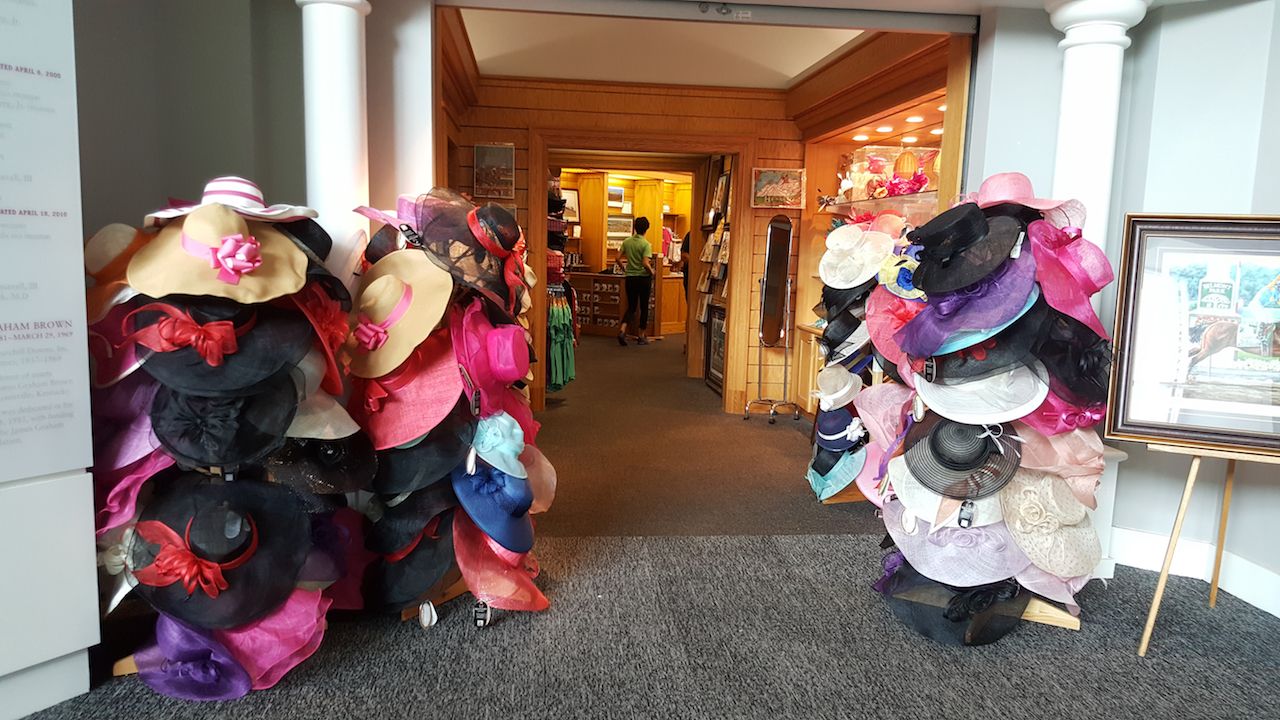 Things changed just a decade later. The Kentucky Derby Museum puts the date that extravagant hats hit the mainstage around the 1960s, “when social fashion norms loosened up and the presence of television gave women a reason to stand out.” By 2011, half a century of big hat love was bolstered by the hats and fascinators of the British royal wedding.

“The royals definitely helped fascinators gain popularity in recent years,” Collier says. “At the Kentucky Derby Museum gift shop, we see ladies browsing for hats, fascinators, or a combo of the two, appropriately named the ‘hatinator!’”

Which brings us to today. It’s not just those in Churchill Downs wearing something ridiculous on their heads. Walking down the streets of New York City on race day in recent years, I’ve seen hats that take up more sidewalk space than umbrellas. Where I went to college in Auburn, Alabama, standing was sometimes the only way to watch the race over the headwear people wore to the bar. The slow burn of crazy hats has become so accepted over the years that something like a flower larger than your face is considered perfectly normal.

Maybe it stems from the fact that most Americans just aren’t all that into horse racing. The Kentucky Derby is a cultural event (for some parts of the country more than others) despite professional horse racing not being a part of mainstream American culture. So, to partake without knowing anything, we find parts of the event we can relate to. For some, that’s downing Mint Juleps, whether it’s the $1,000 one made with Woodford Reserve on the track or a pre-mixed one made at home with Old Forester’s ready-to-drink Mint Julep (which is the official drink of the Derby). For others, it’s hats.

It was a long and winding road to get from Col. Meriwether Lewis Clark Jr.’s classy horse race in 1875 to today’s women parading Churchill Downs with plastic flamingos on their head. Through all of America’s twists and turns, we’ve gotten to where we are today. But hey, there are stranger things out there than wearing a hat that makes you look like a butterfly landing pole.