Round a corner in Rio de Janeiro, Brazil, and you’re likely to be greeted by a bright, evocative image — sometimes small, sometimes very large. The city is awash in creative and colorful street art.

“Rio has a lot of street art projects going on, a lot of talented artists, and a lot to say,” says Nina Gani. In 2014, Gani founded the Rio Street Art Tours, the first company to take travelers on tours of Rio’s colorful, bold street art.

Brazil legalized street art in 2009; all that’s needed is permission from the property owner. The scene got a boost with Rio’s hosting of the 2016 Summer Olympics, when the city revitalized its old port area and added street murals throughout.

Artist Eduardo Kobra’s stunning, 620-foot-long Etnias depiction of Indigenous peoples is the best known, but the entire area is packed with murals — like the one of a spunky young woman by Amora Moreira. In fact, the port is the starting point for one of the two tour routes we recommend below. 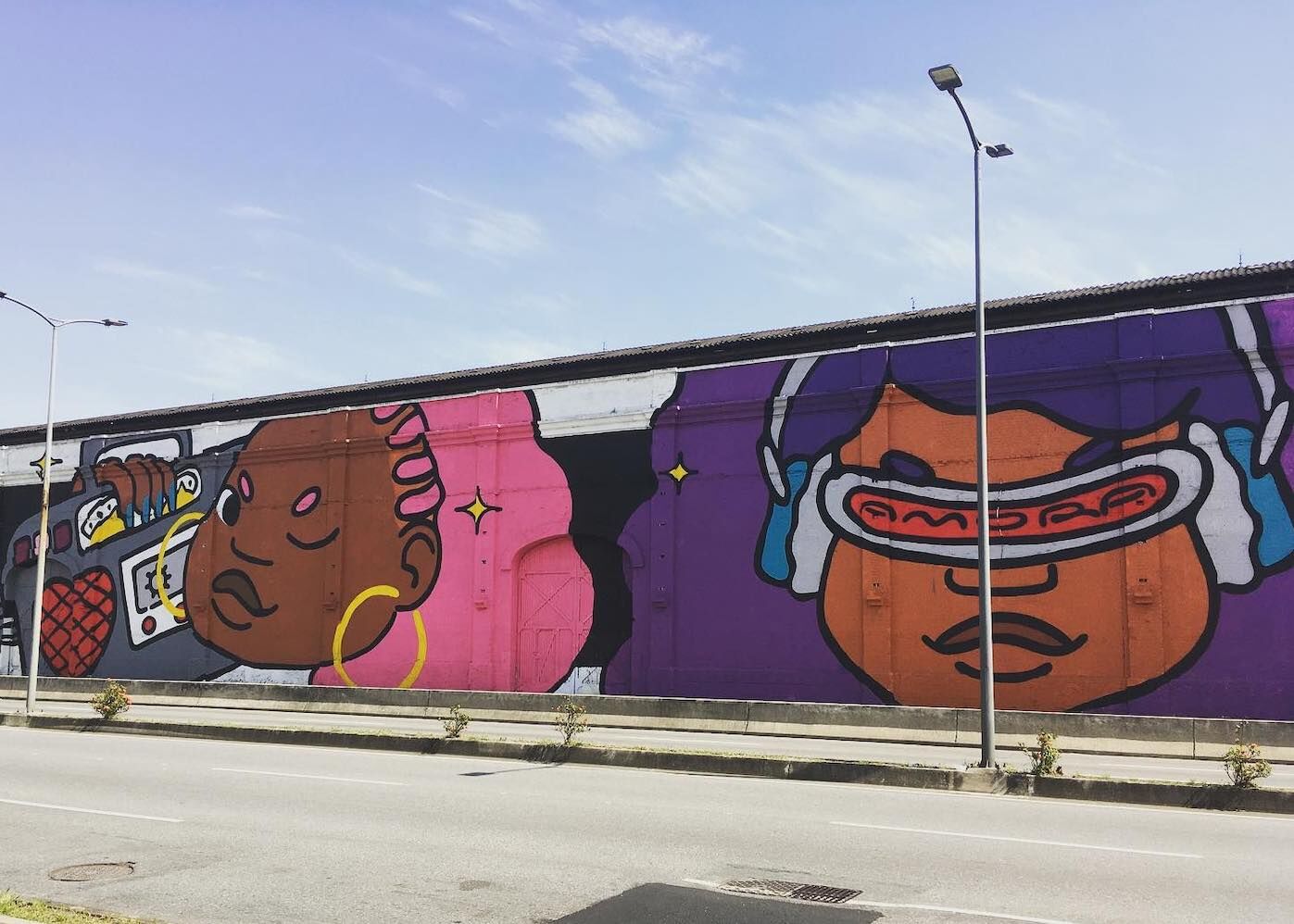 “Street art helped art become part of the life of the Carioca in general — from the most humble to those with a lot of money who are also observing what’s happening in the street,” he says, using the word “Carioca” to mean a person from Rio de Janeiro.

Mosciaro’s art is found in famed locales like the Sugar Loaf cable car, where his vibrant work decorates all three station houses. But he’s also appreciative of the chance to bring art to the city’s less fortunate residents.

“Street art opened the door for me to go to places I wouldn’t have gone,” he says, describing painting in underprivileged areas as more welcoming than in many wealthier neighborhoods. “When you’re painting in a favela community, people offer food, beer. They are happy that you are there sharing your art.”

Better yet, says Mosciaro, is that it’s been reciprocal. “There has also been a street art boom in the communities, in the favelas.” He says these artists “discovered that they could, through their art, add value to the place where they live… So many artists developed first within those communities, then they won the world.”

Mosciaro isn’t exaggerating. Take artist Marcos Rodrgio, who goes by the name Wark Rocinha after his home “Favela da Rocinha,” the country’s largest favela. Since he started painting at 17, he has traveled far with his spray cans and paint rollers, bringing his bright hues and deceptively joyful characters to big outdoor spaces around the globe. His Instituto Wark foundation also trains other Rocinha youth in art.

While each artist has his own language, Mosciaro says Rio’s street art — which Brazilians call “grafite,” pronounced “grah-fee-chee” in the Rio accent – seems influenced by its tropical, seaside surroundings. What we call graffiti, with tags and letters, they call pixação, although artists like Marcelo Ment sometimes include elements of one into the other.

Gani contrasts Rio’s art to that of São Paulo, which she says reflects the city’s very vertical, concrete, and urban feel. In Rio, Gani says art tends to be less imposing. “It has more of a Rio vibe, which is more horizontal, more relaxed,” she says.

Gani comments, though, on the growing number of outside artists. “While it’s great for Rio that we have artists from outside who come here to paint, there’s the flip side that you begin to lose a little of the essence so typical of Carioca art,” she says. “I think you see that in Berlin and Buenos Aires and New York, where so many artists come from outside but each city still has its own style.”

“Rio de Janeiro has a lot of history,” says Nina. Indeed it does. After the area’s Indigenous residents were nearly decimated by Portuguese colonists who first arrived in the 1500s, an estimated 900,000 enslaved Africans were forcibly brought through Rio de Janeiro alone. Despite that tragic history and its ongoing, wrenching inequality, Rio exudes a vibrancy that comes through, for example, in its Carnaval parades. These conflicting passions infuse Rio’s art.

Even though Gani offers discounted street art tours to Brazilians, she says that 90 percent of her clients are from outside Brazil. They enjoy the opportunity not only to see street art on her two- or four-hour tours, but also, when planned in advance, to meet some of the artists.

“It’s not just the visual part that is impactful, but what captivates me is understanding the city a bit better through that art. Who are these residents and what are they saying?” she tells me. “Murals are kind of like a collective memory of the city.”

As Gani points out, Rio’s street art isn’t concentrated in one place. She leads separate walking tours focused on one area, such as one in the Olympic port area, one in Jardim Botánico, and one at the Arpoador. She has also taken groups to some favelas to see art, which we only recommend doing so with someone like Gani, who knows the artists and where to go.

If you want to spend just two hours touring street art, then you should also concentrate on just one area – like the Olympic port area or the Santa Teresa neighborhood. However, we’ve included some longer tour options here, if you have more time to spare.

This tour will take you most of the day. If you don’t have that kind of time, just enjoy the area known as the Boulevard Olímpico. Alternatively, walk around Santa Teresa, one of Rio’s oldest residential neighborhoods. Santa Teresa has leafy streets, old buildings, Boho vibes and stunning examples of Rio street art.

The Gamboa neighborhood around the renovated port is a must-see spot for expansive and bright murals. While the area is also called the Boulevard Olímpico, it’s actually on Avenida Rodrigues Alves that you’ll find the moving Etnias, the largest single piece of street art in the world. Here, you’ll be surrounded by artworks created by the who’s-who of Rio’s best known street artists. You could spend the morning taking in the works stretching from the Rio Aquarium at one end to the Museum of Tomorrow. The Museum of Tomorrow focuses on applied science, not art, but the building’s architecture and the aquatic setting are worth admiring. 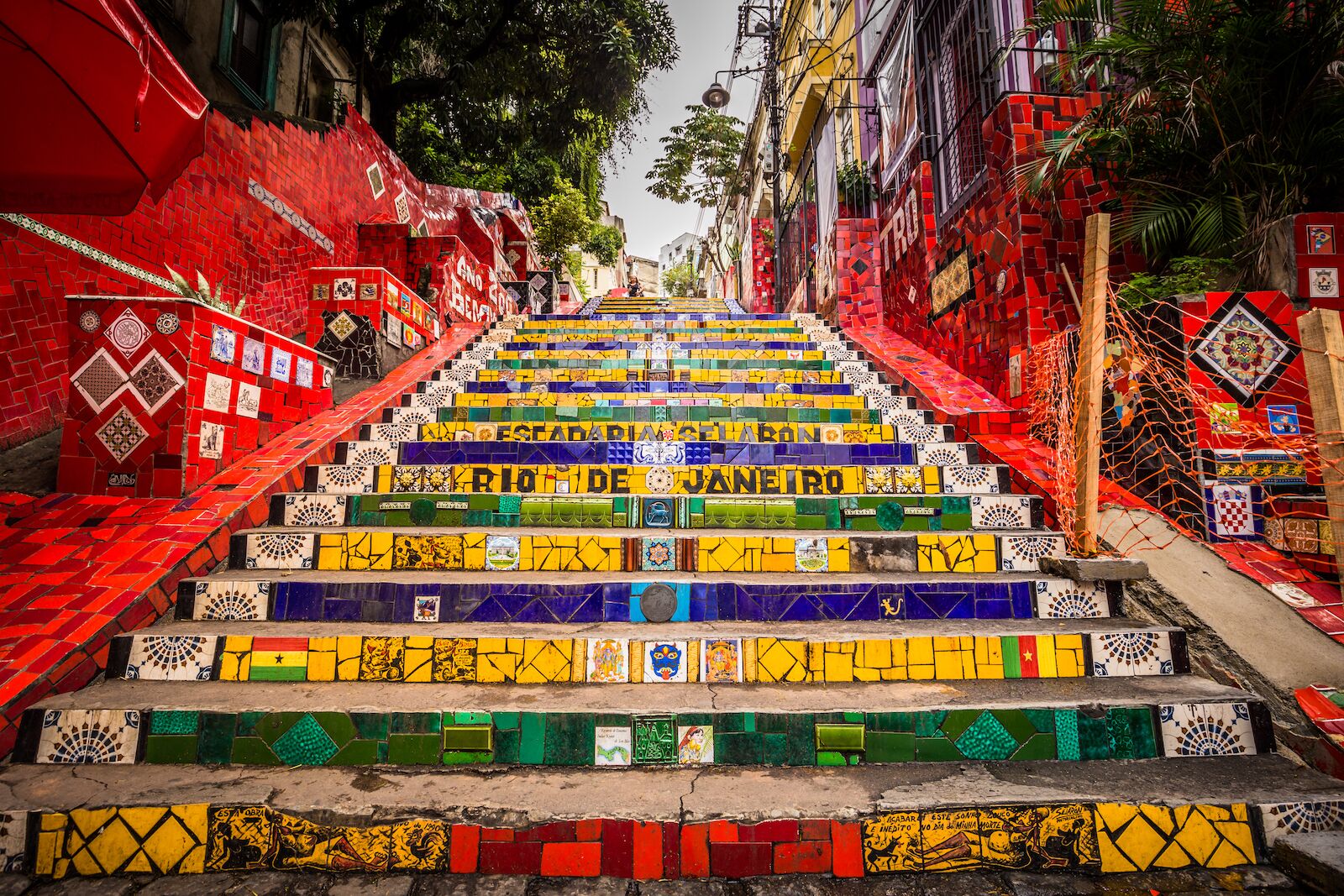 A 15-minute taxi ride from the Boulevard Olímpico will take you to the Escadaria Selaron. While not the work of Brazilians wielding spray cans, these 215 steps lined in showy mosaics tiles were the work of artist Jorge Selarón, who was born in Chile. They are certainly street art, since Selarón at first used scavenged tiles from construction sites and wherever he could find them to fix a long set of steps leading uphill near his home. Today the steps have thousands of tiles from dozens of countries. In this neighborhood, known as Lapa, there’s plenty of street art to be found.

The Selarón stairs will take you up into Santa Teresa. At the top of the stairs there’s usually a vendor selling ice cream, which may be just what you need. It’s less than 15 minutes to walk to the Museu da Chácara do Ceu. The city views from this one-time wealthy home are sweeping and, while the art is more staid than what you’ll see out on the street, the collection is impressive. 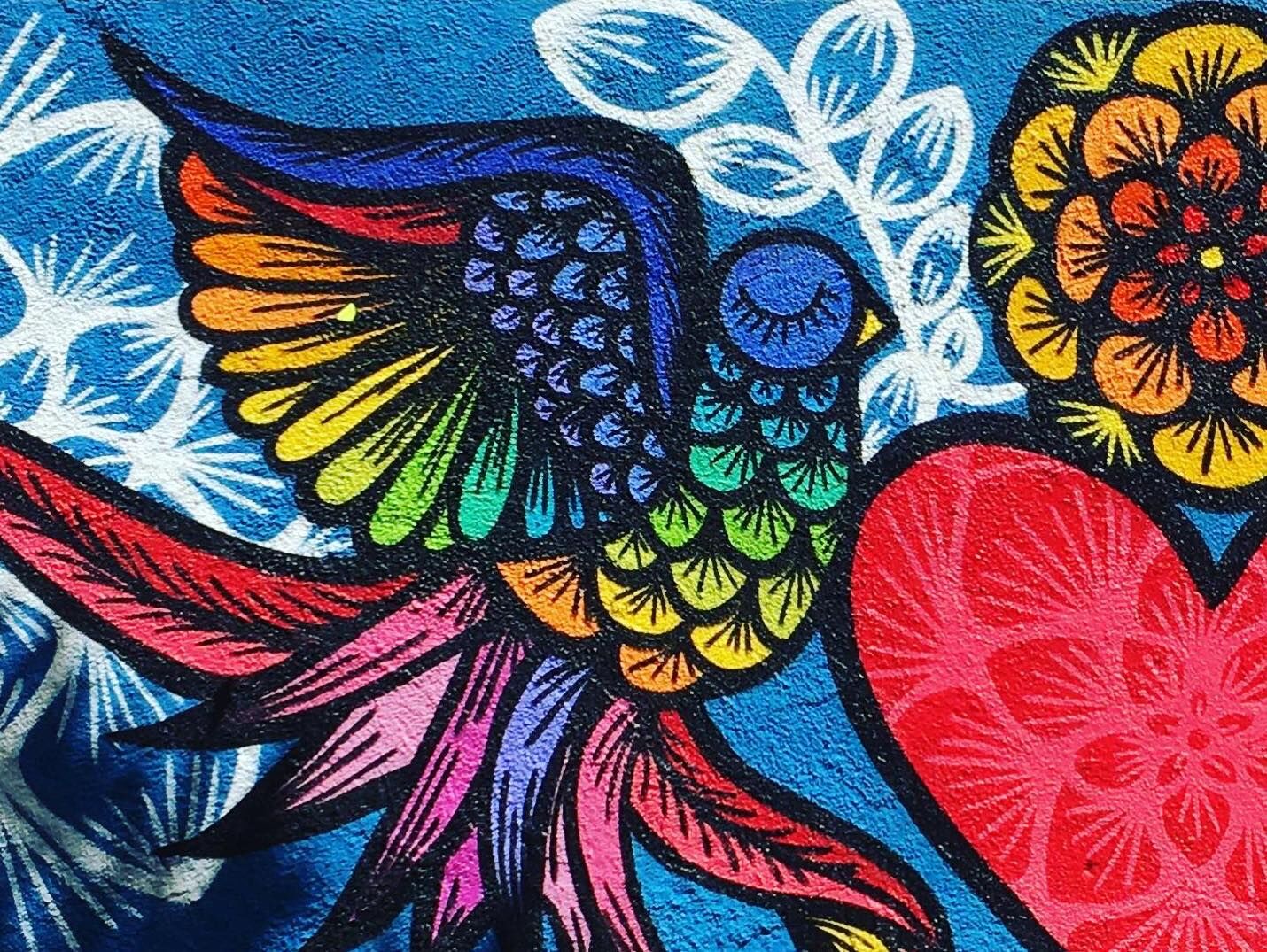 Santa Teresa is one of Rio’s oldest residential neighborhoods, crowned on top with an 18th-century convent and served with a tram built in 1872. Artists like RafaMon, aka Rafaela Monteira, whose festive imagery nearly jumps off the walls, call Santa Teresa home. She has decorated plenty of the walls there, including a portrait of a past resident for whom the neighborhood’s cultural center Centro Cultural Laurinda Santos Lobo is named. 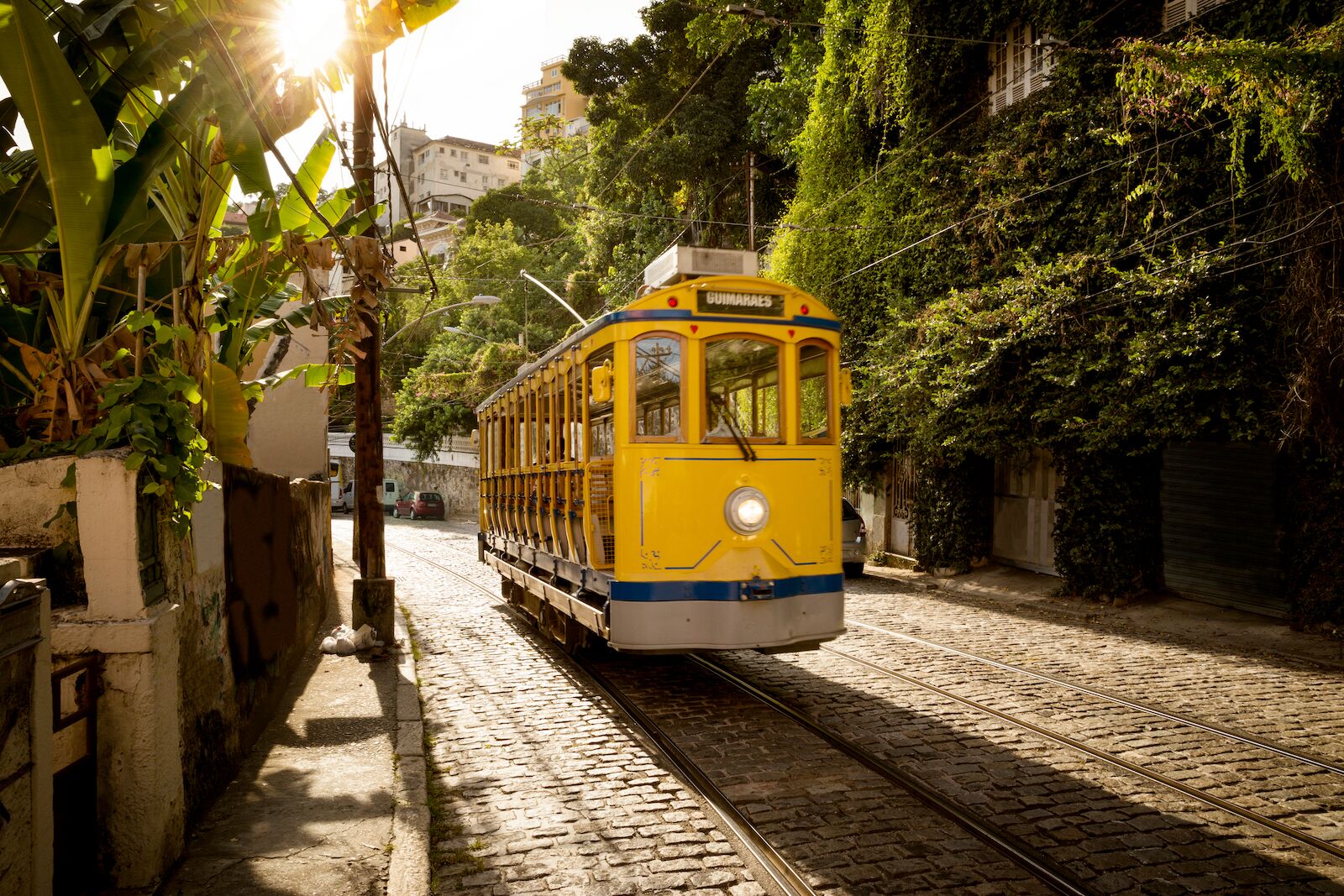 To make your way back into town, consider taking the Bonde, the famous street car running through cobblestoned streets that featured in the animated film Rio. Be observant during the first part of your journey, many of the walls on the way down are lined with art.

If you don’t have a lot of time in Rio, this Rio street art tour will introduce you to the basics.

This iconic granite rise separates Ipanema Beach from Copacabana, and the vistas make it a worthy destination of its own. The walls of the Garota de Ipanema Park, named for the famous song by Antônio Carlos Jobim, are full of spray-painted expressions. From here, you can get to Jardim Botánico by Uber or taxi. A 15-minute ride will take you along the Ipanema and Leblon Beaches or along Rio’s lovely Lagao (lagoon), with the Corcovado peak as a backdrop.

The neighborhood named for Rio’s huge botanical gardens has long attracted street artists. It’s worth visiting the expansive gardens themselves and then spending time admiring the artists’ handiwork. On one walls, the artist Marcelo Jou, best known for his geometric shapes, joined with artist Bruno Lyfe to make a piece that plays on the difference between urban and wild, where the sky is a watermelon but also encloses a city, and potted plants play at being sunrises. Or maybe it’s sunsets.

Brazil's Paralympics Are Kicking Ass, and It's Awesome

11 Inspiring Olympic Women Who Are Making History This Year

What Travelers Can Learn From Ryan Lochte Getting Robbed

The Winners of the Rio Olympics Didn't Even Medal

11 Ways To Be a Local on Rio de Janeiro's Beaches