While sparing you the pain of any cliche “early riser” metaphors, we’d be remiss to not encourage hardy visitors to Rocky Mountain National Park to arrive as early in the morning as possible. The park is open 24 hours, but the vast majority of visitors arrive after 8 AM and depart by 6 PM. As long as you don’t mind getting in an activity or two before visiting the visitor centers, which open at 8 AM, a dawn or even pre-dawn arrival to the park offers views and strolls free of distraction — except by the wildlife you’ll likely see grazing near the road that has yet to be dispersed by the onslaught of the coming national park rush hour. Here’s what to do at Rocky Mountain National park before 9 AM, including catching the sunrise of a lifetime.

Watch the sunrise from Bear Lake or the Alpine Visitor Center 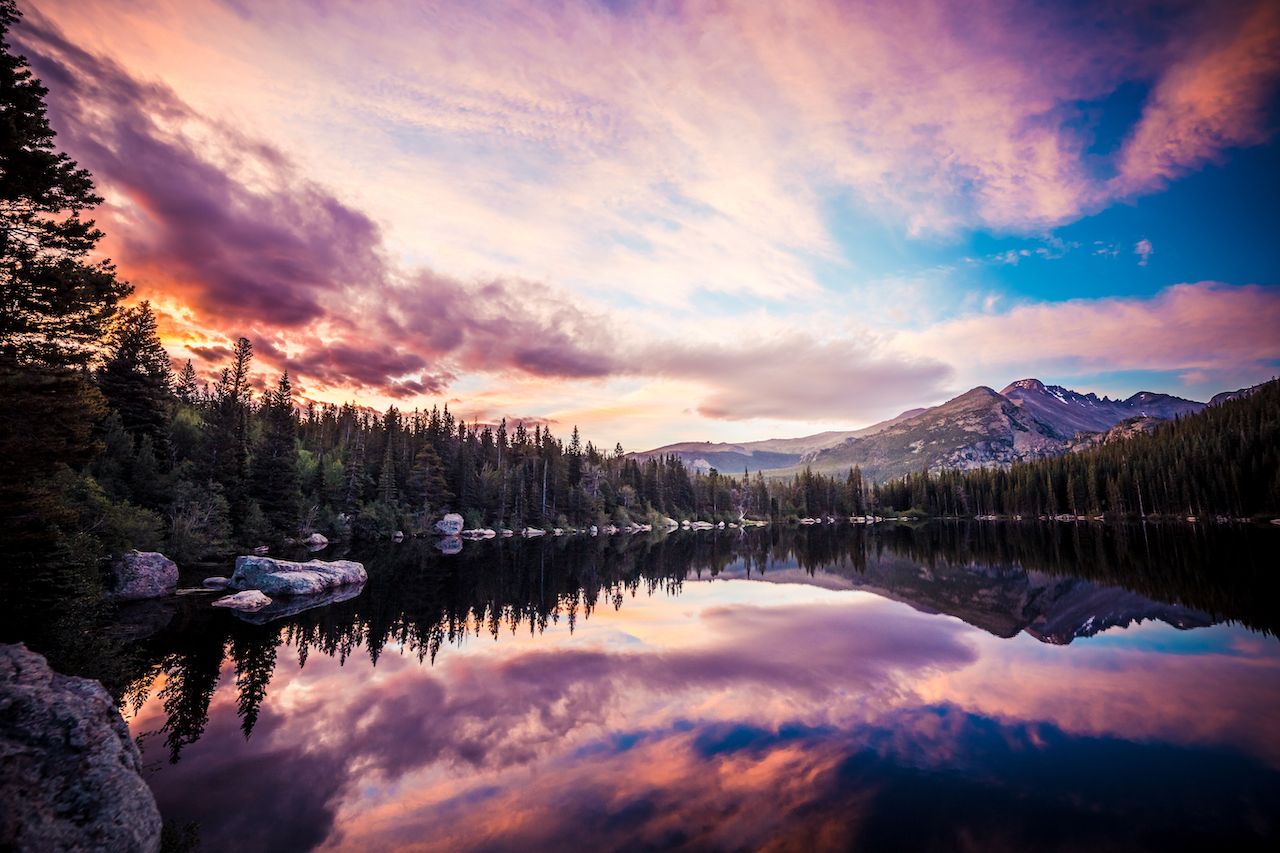 Sunrise from the Alpine Visitor Center, located at 11,796 feet near the top of Trail Ridge Road, is rivaled only by catching the morning rays atop Hawaii’s Haleakala National Park and Bali’s Mt. Batur. The difference is you can drive there. Perch yourself on a lawn chair; better yet, stand against the rock wall adjacent to the building to catch the day’s maturity over the peaks to the east. Alternatively, the rays reflect pinks and purples off Bear Lake and position you perfectly for an early morning hike.

Be the first to spot wildlife 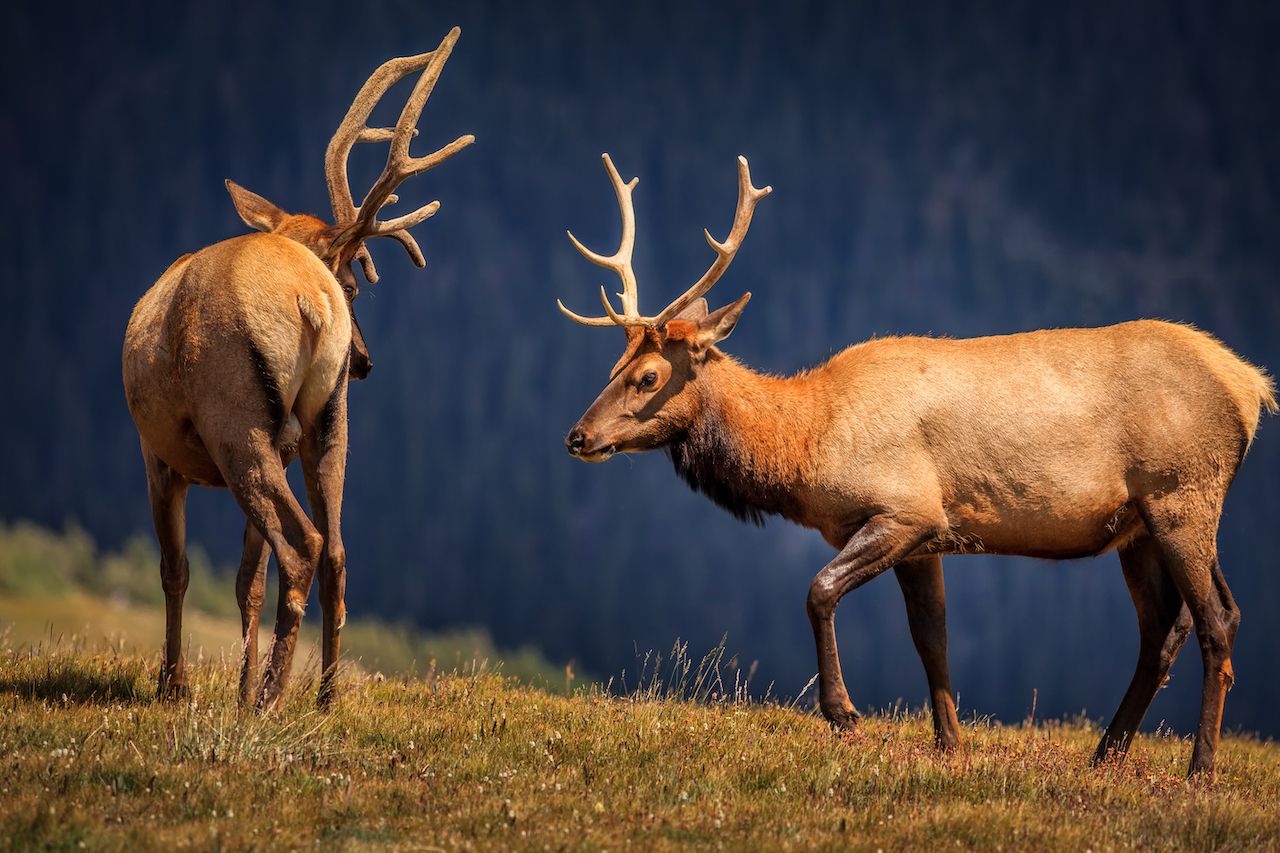 Elk, mule deer, bighorn sheep, and many types of birds including eagles, falcons, and ptarmigans outnumber people inside the park by a large margin. Thing is, it often appears the opposite when the park is busy. Dozens of cars often pull over along the side of Trail Ridge Road at the mere spotting of a single moose. But by arriving early while most are still polishing off their continental breakfasts back in Estes Park or Grand Lake, you’ll actually be able to witness the animals without fighting for parking. What’s more, when fewer people are around, wildlife numbers tend to be higher. Crazy how that works.

Get on the trail before everyone else 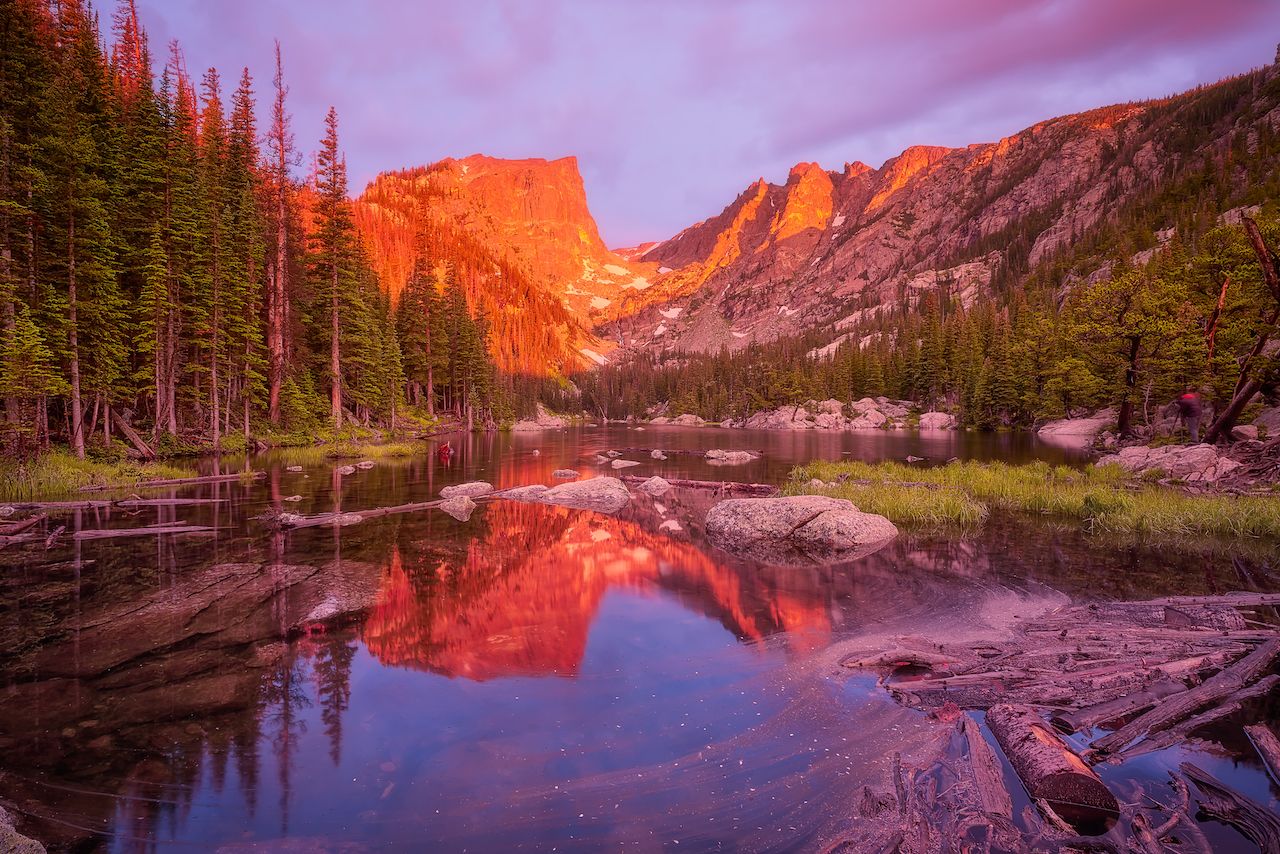 After the sunrise, an early morning hike from Bear Lake is the ideal way to keep an unforgettable morning going. The Bear Lake Loop is under one mile in length, but if you desire a longer stroll, continue on to Emerald Lake and pass by Nymph and Dream Lakes en route. In addition to good exercise, an early morning hike allows you to beat the crowds and have the trails nearly to yourself, with the added perk of a rosy assessment of your photography skills. It’s near impossible not to overwhelm your phone’s camera roll with vivid imagery as you pass by the lakes with the greenery surrounding them and peaks in the background.

Take a trail ride on horseback 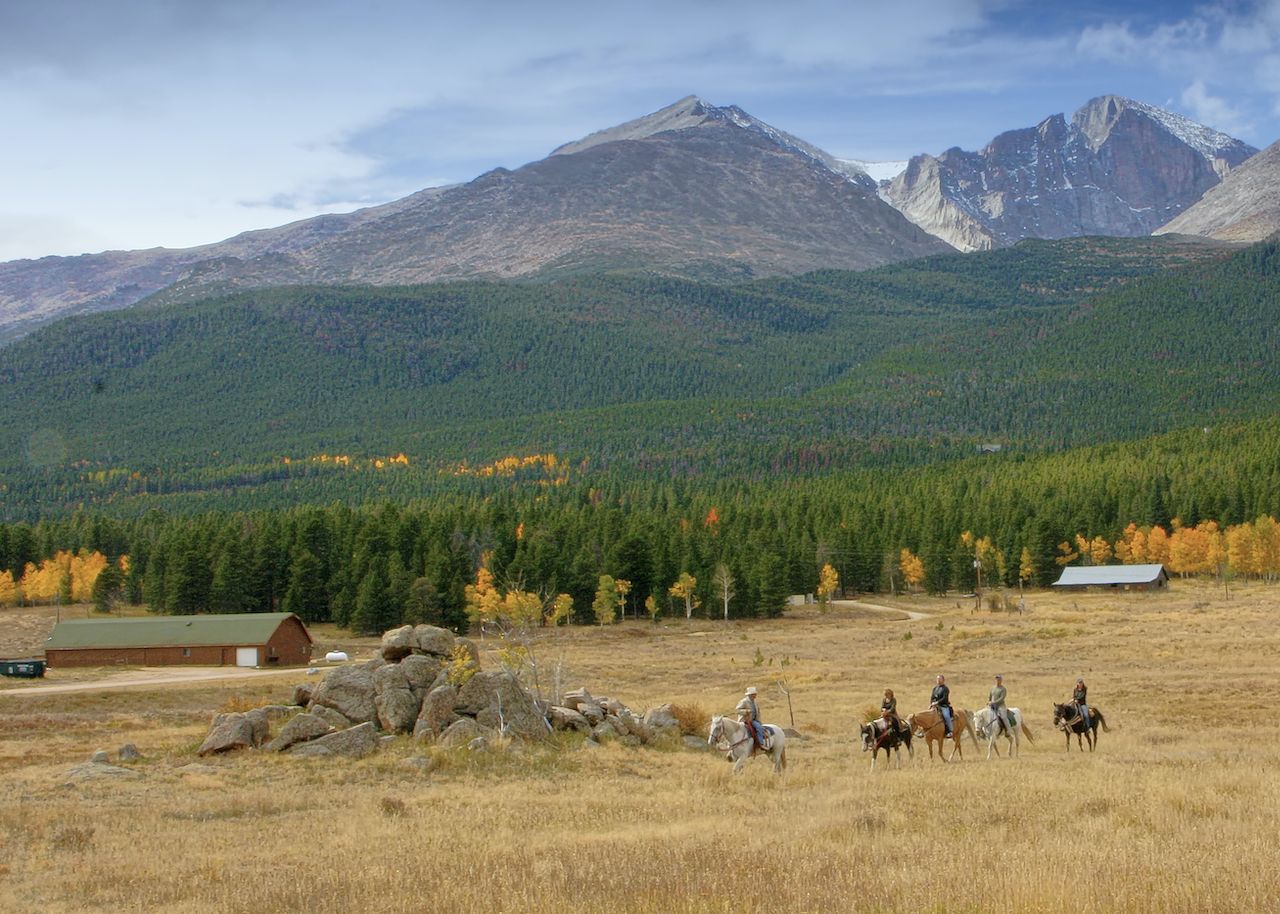 If an early-morning hike isn’t your jam, head to Cowpoke Corner Corral and hit the trail by horseback, instead. The seven-hour guided ride ($260) from the corral into the park heads all the way up to Cub Lake and includes lunch once you get there. You’ll cruise through both Moraine and Hollowell Parks, view the devastation and rebirth sparked from the Forest Canyon Fire of 2012, and have plenty of time to pepper the guide with questions about the flora and fauna you pass along the way. They call the tour an “extended half-day,” but with an 8 AM departure followed by seven hours up and over a mountain, you’ll be ready for an early happy hour by the time you arrive back at the stable. 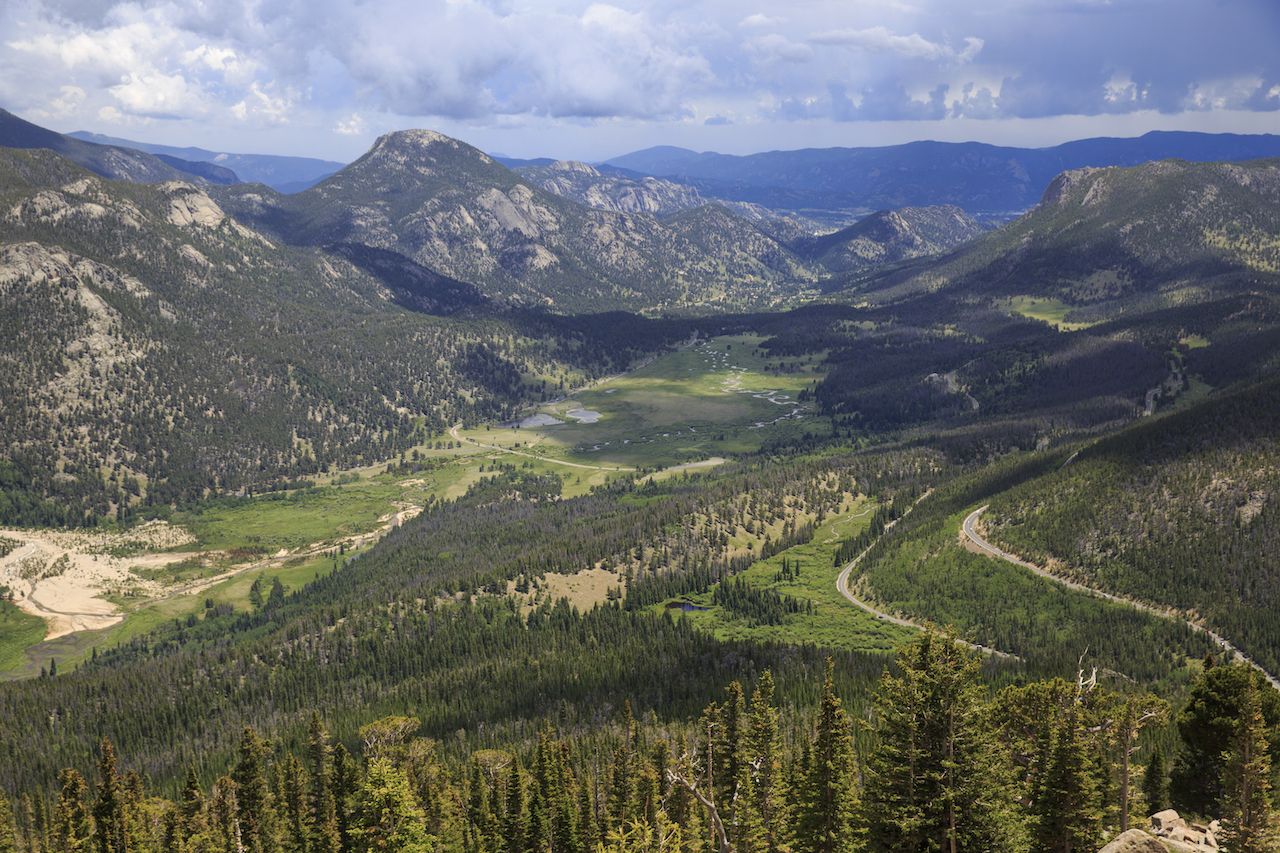 A typical summer day in Rocky Mountain National Park involves a line of cars and RVs snaking their way up and over the Trail Ridge Road pass, crowding the scenic viewpoints en route. By following your wake-up hike with a cruise over the famed highway, you’ll be able to secure positioning directly in line with the best photos to be taken from each of the numerous pull-outs along Trail Ridge Road. Must-dos include Many Parks Curve, Forest Canyon Overlook, and the obligatory summit photo from your window — slow down first — from 12,183 feet. Fairview Curve is worthwhile, as well.