Bali’s beauty precedes it: rolling rice terraces, roaring waterfalls, and white sandy beaches. However peaceful and relaxing this green and glorious side of Bali can be, it’s well worth seeing some sights at a higher elevation. Bali is a volcanic island, with striking peaks coated in centuries-old black lava and dotted with deep calderas formed by plumes of escaping lava. Hiking up one of those volcanoes gives you an appreciation of the fiery geology that created this apparently serene land.

An active volcano you can summit safely 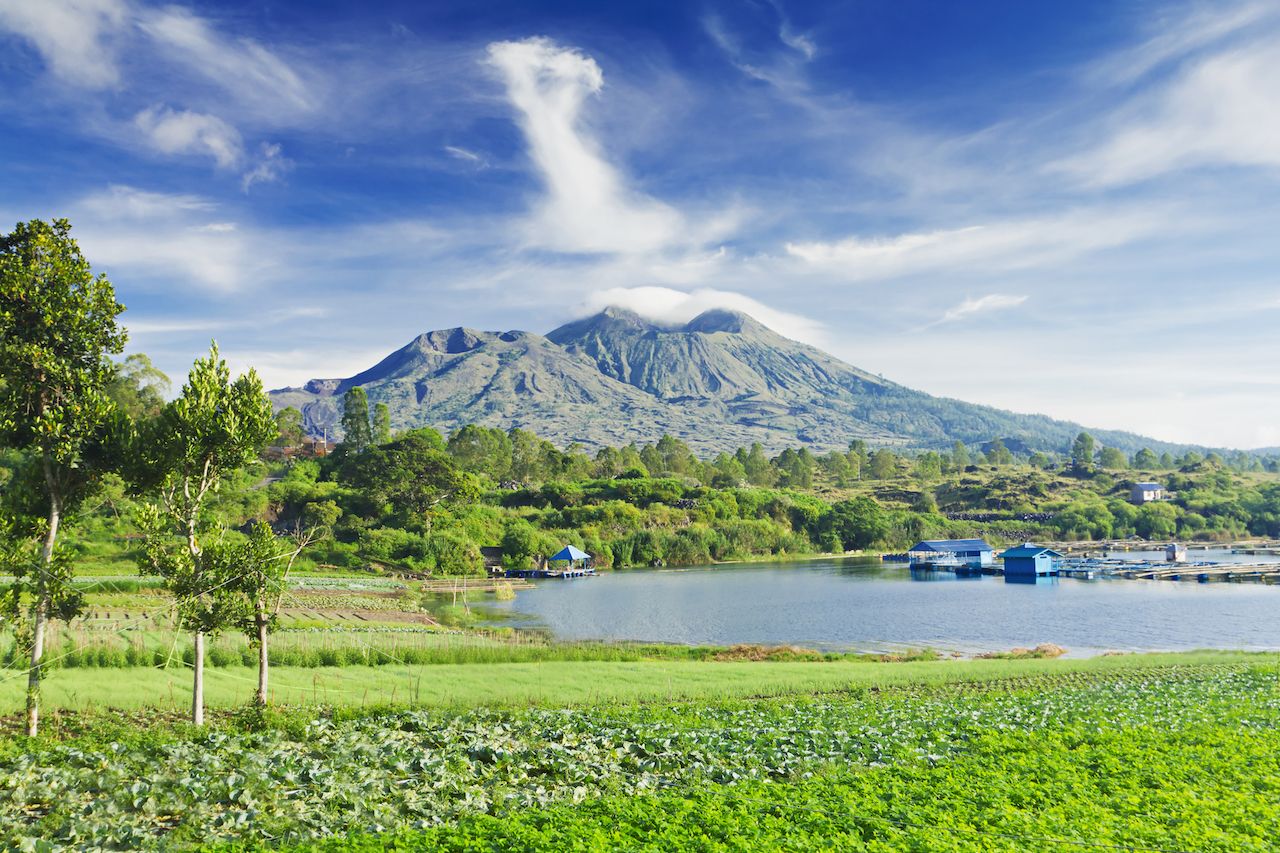 Located in the northeast of the island, Bali’s Mount Batur is a pilgrimage site for adventure lovers, providing a stark contrast to the lush greenery below. At its peak sits an enormous crater, known as a caldera, caused by a powerful eruption at least 20 centuries ago.

At the base of Mount Batur are a gigantic crater lake and a splattering of local villages, many of which have existed in the mountain’s shadow for decades. While Mount Batur is classed as an active volcano, it hasn’t erupted since 2000 — unlike Bali’s Mount Agung, which is erupting at the time of writing.

If you want to safely summit an active volcano, you can do so during a day hike up Mount Batur. Black lava tells tales of the volcano’s volatile past while thermal steam drifts up from the crater and escapes cracks in the rock face. You can cook an egg or warm your hands over the vents, an enticing proposition should you arrive in the early morning before the sun’s up.

Sunrise is the ideal time of day. 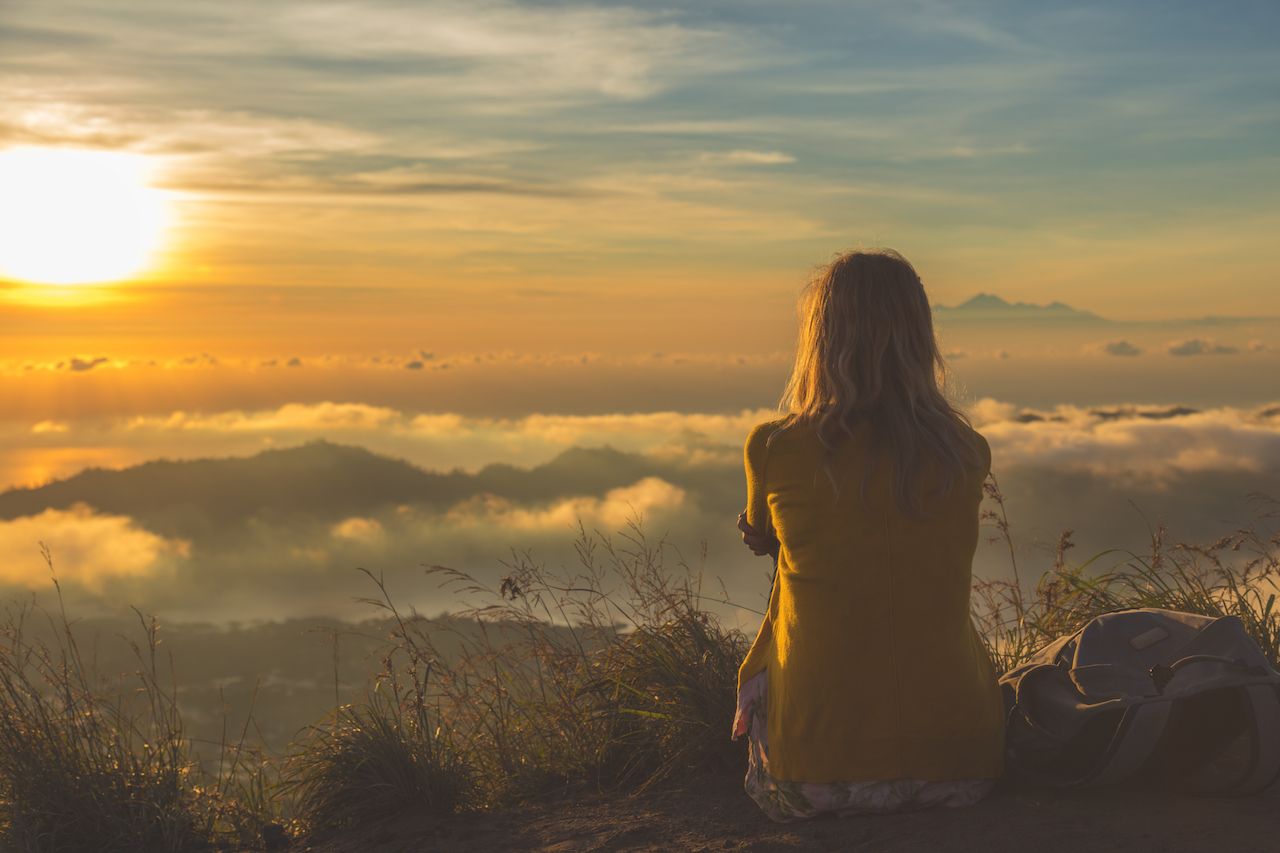 The most magical time to hike Mount Batur is, without a doubt, sunrise. Climbing in the dark is part and parcel of the experience with views over adjacent Mount Agung to reward your efforts. Mount Batur is over 5,600 feet above sea level, requiring two hours to summit. The views are dependent on the day’s weather and cloud coverage, so if you have multiple days at your disposal keep an eye on the forecast and ask local trekking companies for advice.

All being well, you’ll spy a golden sunrise from your lofty vantage point, the villages of Bali speckling the landscape down below. Rather than the lush terraced rice fields of central Bali, the arid landscape is blackened and craggy, with small settlements nestled around the otherworldly rock formations and patches of forest springing from gaps in the age-old lava.

Like any hike, this really depends on your fitness levels. The Mount Batur hike is described by hikers as anything from “really easy” to “extremely difficult.” The two-hour journey at a moderate incline is completed each day by travelers of all ages, but a relative level of fitness is required. Presuming you leave early enough, it’s a slow but steady climb rather than a race to the top.

The dense forest of pine and eucalyptus trees at the base of Batur is replaced by wiry, low-growing shrubs as you ascend the hiking track, the temperature rapidly dropping on the exposed mountainside. The terrain varies between steep inclines and small slopes, giving just enough rest time to tackle the tougher uphill sections.

What to expect on your day hike 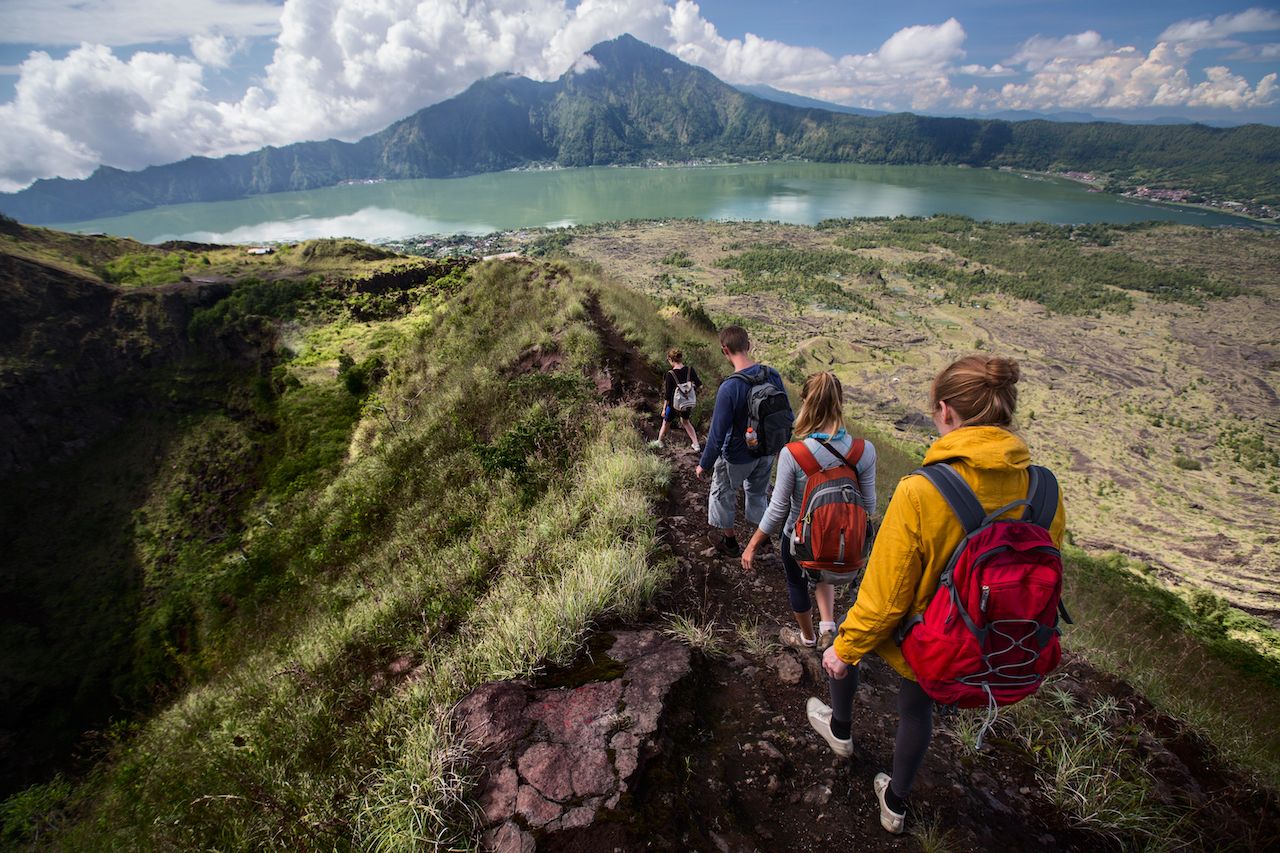 You’ll have to set your alarm early for the sunrise hike. Tour companies typically pick up hikers in Ubud around 2:00 AM and other towns on the island even earlier. The usual busy highways running through central Bali are eerily silent as you travel northeast, free of the usual tourist taxis and buzzing scooters.

The unsettling silence is heightened as, after a one and a half hour drive, you draw up to the parking lot shrouded in forest. As you make your way towards the starting point, your eyes will adjust to your surroundings: a loose, rocky track winding up the mountain with a steady trail of flashlights flickering above. Despite this indication that you’re not alone, the rare break from Bali’s tropical air may give you the chills.

The clammy coverage of the forest canopy gives way to cool nighttime air at altitude, although it won’t last long. Soon after sunrise, the usual humid heat of Bali will return, bringing with it the sights and sounds of the day. Birds twitter and long-tail macaque monkeys parole around their territory, unperturbed by the presence of humans. The awestruck silence that hangs in the air during sunrise is quickly replaced by excited chatter and the sound of footsteps as tour groups begin to explore, peering down into the enormous caldera and discussing the thermal properties of the volcano.

Once you’ve hiked back down and traveled back to your accommodation, it will be midday and you’ll likely be ready for a shower and a nap.

How and when to go 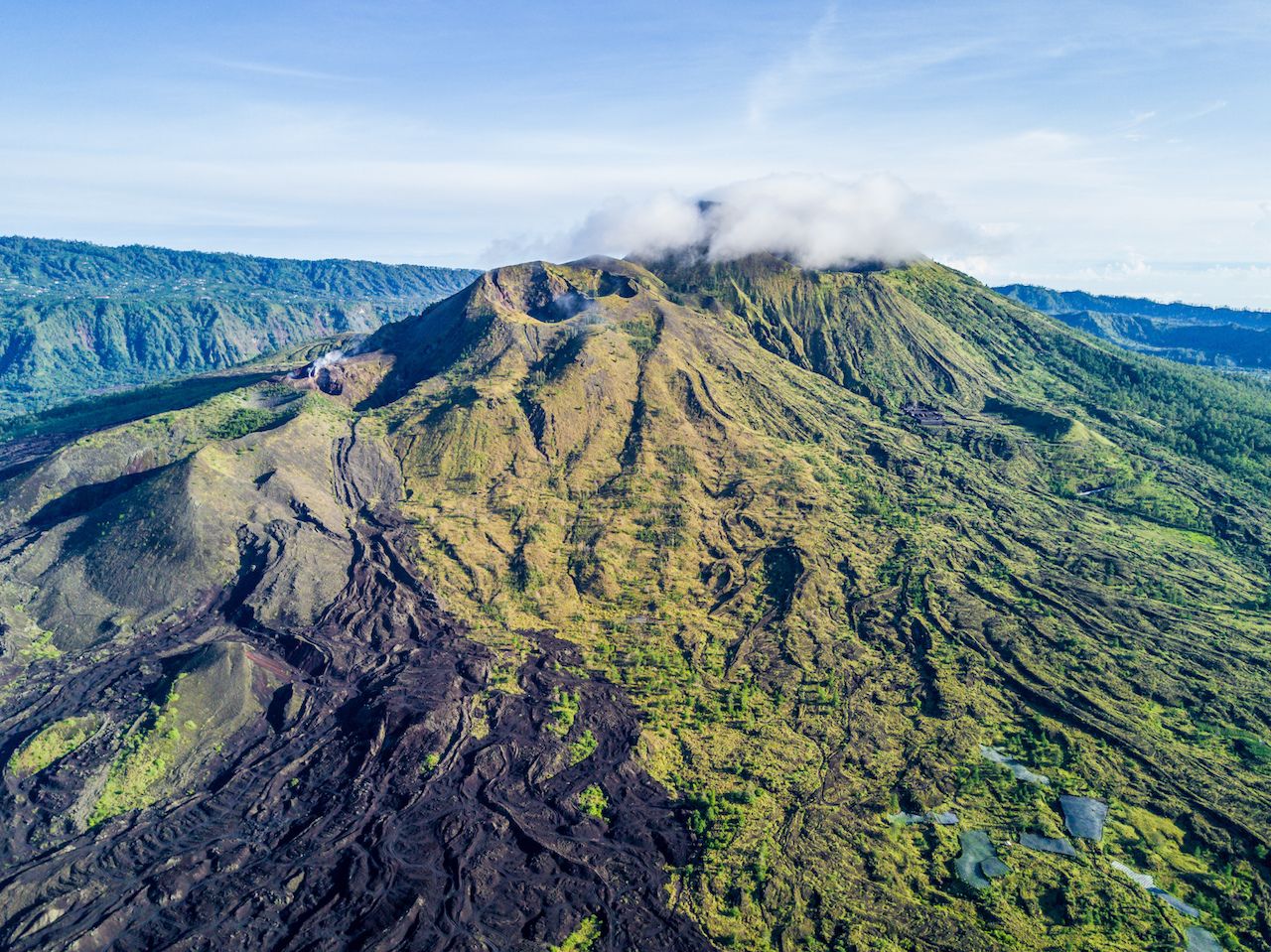 The rocky path up Mount Batur is best navigated with a local guide. A dirt track littered with small rocks, it’s slippery and potentially hazardous without local know-how, especially in the dark. Balinese tour guides know the craggy volcano like the back of their hand, providing flashlights and guiding your footsteps during difficult sections. Hiring a guide also boosts local employment in the area and is a service almost every tourism office in Bali offers. Check recent reviews to ensure a reputable vendor.

Guided hikes up Mount Batur run throughout the year, but your experience will depend on the season. May to July is optimum while August to September see temperatures soar, increasing the likelihood of sunburn and sunstroke on the trek back down. October through to April is Bali’s rainy season, which can make the volcano slippery and potentially treacherous, though the treks will go ahead provided no rain is scheduled and conditions are deemed safe.

Essentially, you can hike Batur at any time of year, but in certain seasons you may have to factor additional days in case of bad weather. Being so close to the equator, sunrise is 6:00 AM throughout the year, making hike times easy to plan. 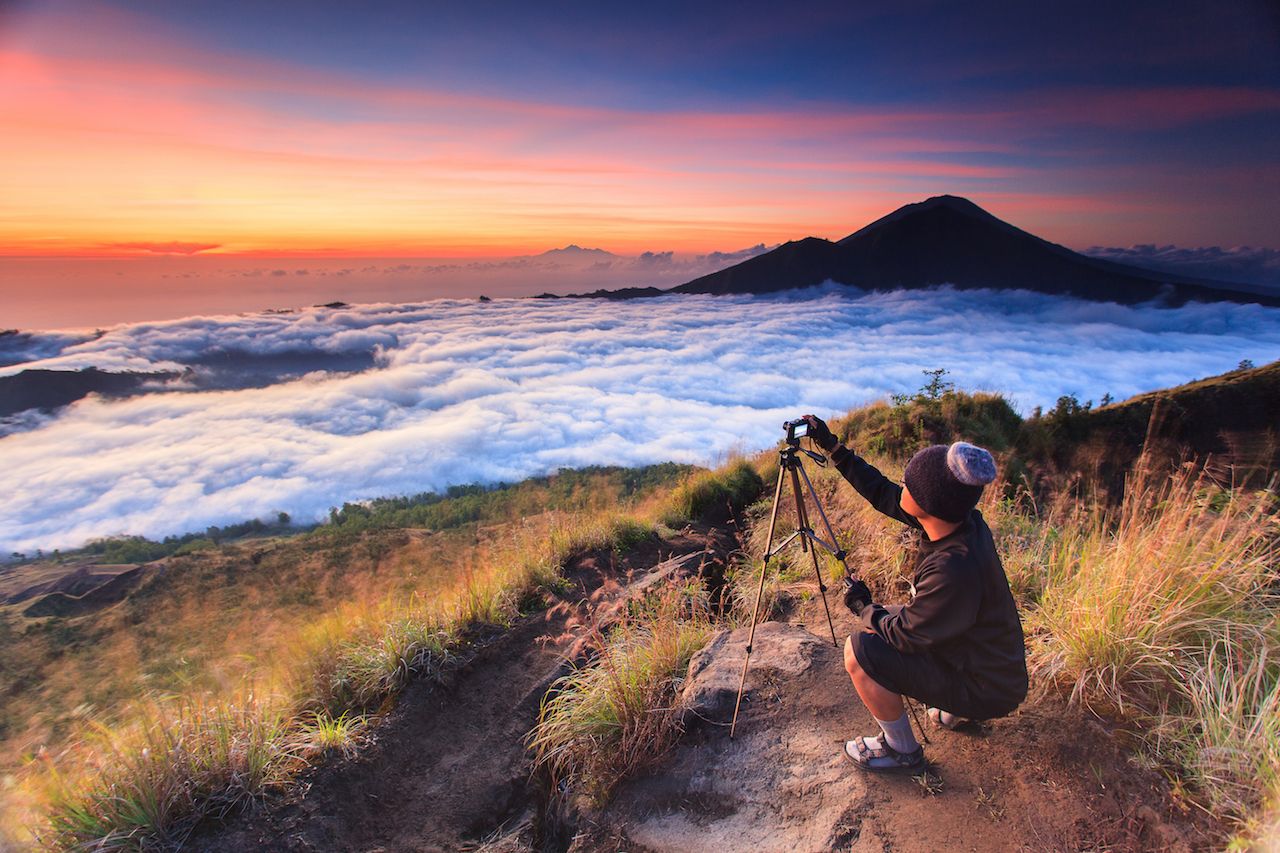 One of the most important things to pack when hiking Mount Batur is an extra layer. This isn’t for the hike itself but your time watching sunrise. Despite Bali’s balmy weather and warm temperatures, it can be chilly before the sun comes up, especially at the higher altitude. Hiking boots are useful should you have them, but regular outdoor shoes will do the job. The journey down Mount Batur is relatively slippery, so you’ll benefit from a pair with good grip.

Long pants can be useful due to scratchy undergrowth, but you might want to stick to shorts if you think you’ll get too hot. Be sure to pack sunscreen, a hat, and sunglasses for the way down. Bring enough water for your hike but remember that you’ll have to carry it, so don’t take more than necessary. Your tour company will provide a basic breakfast of bread, jam, and boiled eggs — but you can bring extra snacks or if you wish.

And of course, don’t forget your camera, or at least a charged smartphone. The image of sunrise from atop Mount Batur will certainly be impressed into your memory — but having the actual photo helps, too.

TravelThe Best Places To Go in Bali for Every Type of Traveler
Tagged
Hiking Trip Planning Bali, Indonesia
What did you think of this story?
Meh
Good
Awesome

5 Ways Bali Can Be Even Cheaper Than You Think

The Edge: How To Experience an Epic Balinese Resort

Round-Trip Flights To Bali Are Under $600 Right Now — Seriously.

Going Om: Shrines, Shamans, and the Lack of Sarcasm in Bali

This Hangover Cure From Bali Is Indonesia’s Miracle Drink