While the masses head to the beaches of Oahu and the other more celebrated Hawaiian Islands, Lanai is often overlooked due to its diminutive size and lack of tourist infrastructure. Many people who visit Hawaii regularly haven’t even heard of Lanai. However, for those who prefer dirt roads and wild, empty beaches, Lanai can’t be beaten.

Don’t be fooled by the so-called Lanai City, the island’s capital. The “city” is, in fact, a small town consisting of a couple of tiny supermarkets, a scattering of shops and cafes, and a small theater. The entire population of Lanai consists of 3,000 people, and most of them live here. The heart of Lanai City is focused around Dole Park, a small green area surrounded by towering Norfolk and Cook Island pines. Many of the buildings are colorful plantation houses that were built for the employees of Dole Pineapples, which operated between 1922 to 1972.

As pleasant as the island capital is, Lanai’s main draws lie in its rugged interior, untamed beaches and dramatic landscapes. A mere 30 miles of the roads on the island are paved, and traffic lights are non-existent. The remainder is dirt track, necessitating the use of a jeep. From the otherworldly Garden of the Gods to the remote Shipwreck Beach and a somewhat surprising cat sanctuary, exploring Lanai by jeep offers a taste of adventure for those who like to escape the crowds and make their own discoveries. 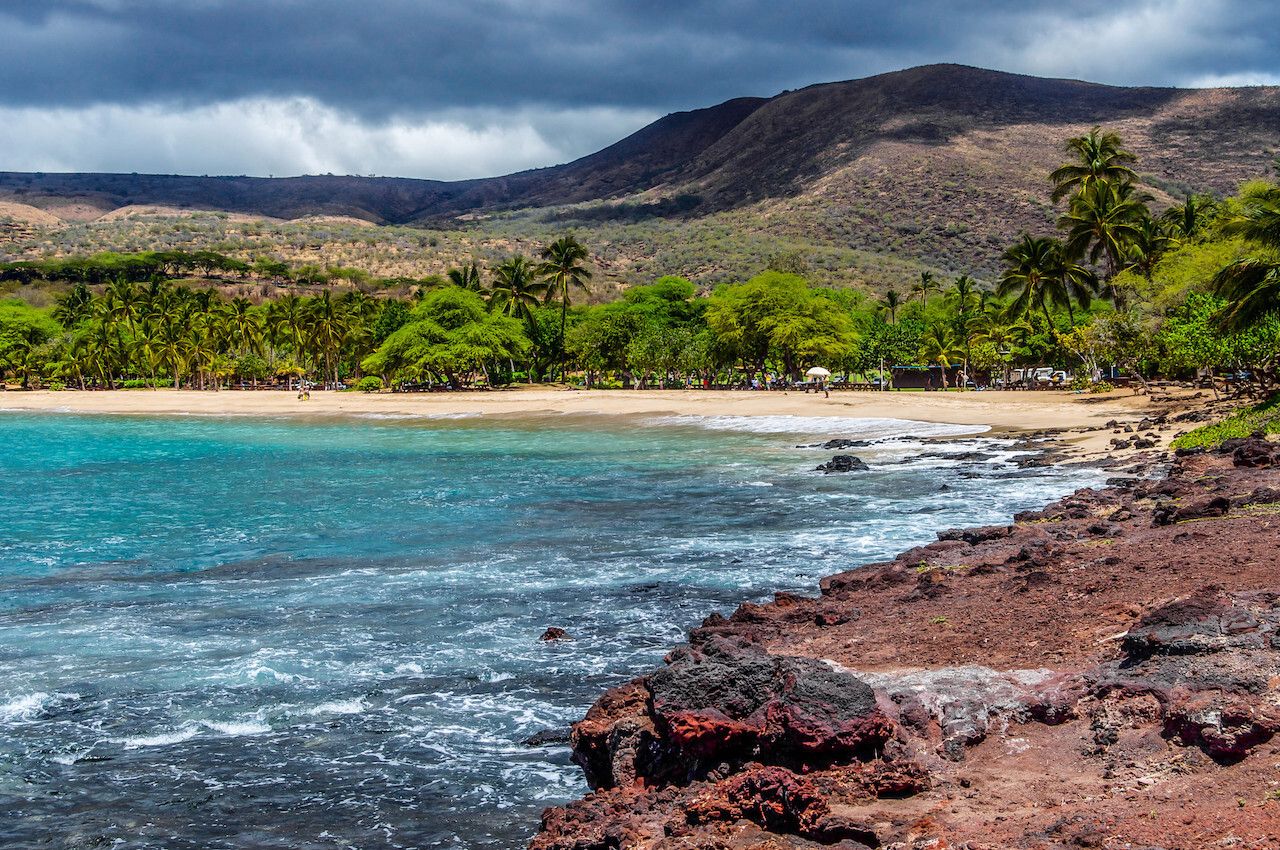 Touching down at Lanai’s tiny airport is very different from arriving on Maui or Kauai. Most of the passengers are islanders returning home and tourists are in the minority. Many visitors come to Lanai on a day trip, arriving by ferry from Maui. The ferry trip takes about an hour and a half. Between December and April, humpback whales can be spotted in the ‘Au’au Channel. For day-trippers, a ferry/jeep hire package can be arranged. A day is enough to see most of the major sights on the island but to really tune into Lanai and make the most of what it has to offer, it’s worth staying for a few days.

Exploring the island by Jeep 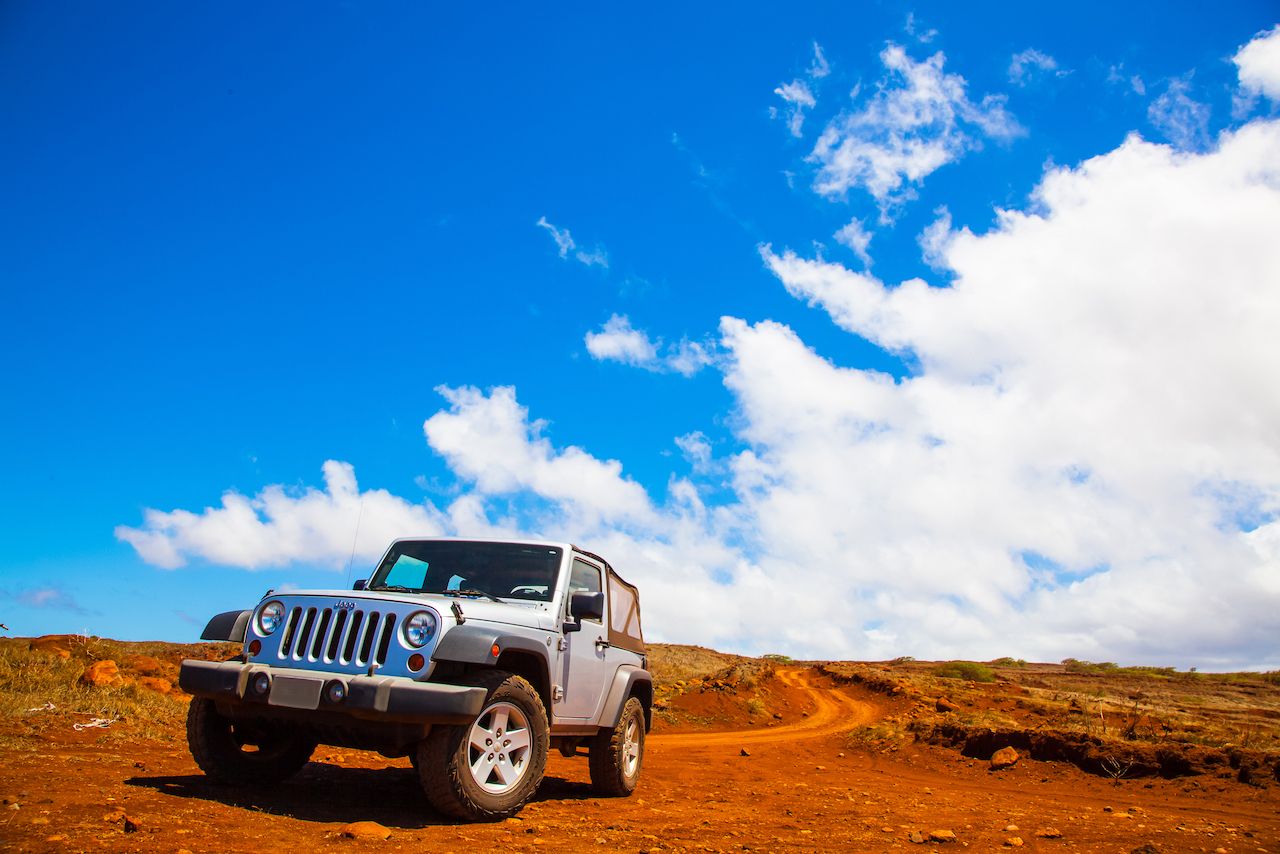 Hiring a jeep is the way to go on Lanai, as it provides access to the island’s most beautiful and isolated sites. Many of the beaches can only be reached by a four-wheel-drive vehicle. It’s important to check the latest conditions as heavy rain can completely wipe out certain routes. Additionally, a good map is essential, as signs are few and far between. It’s also worth heeding the advice of the friendly locals, who always enjoy offering a tip or two to visitors. Load up with a picnic, snacks, and plenty of water — you’ll be heading to some remote spots. If you’re leaving from Lanai City, Coffee Works is a good place to stock up. Below are a few of Lanai’s best spots to explore by jeep.

The Garden of Gods 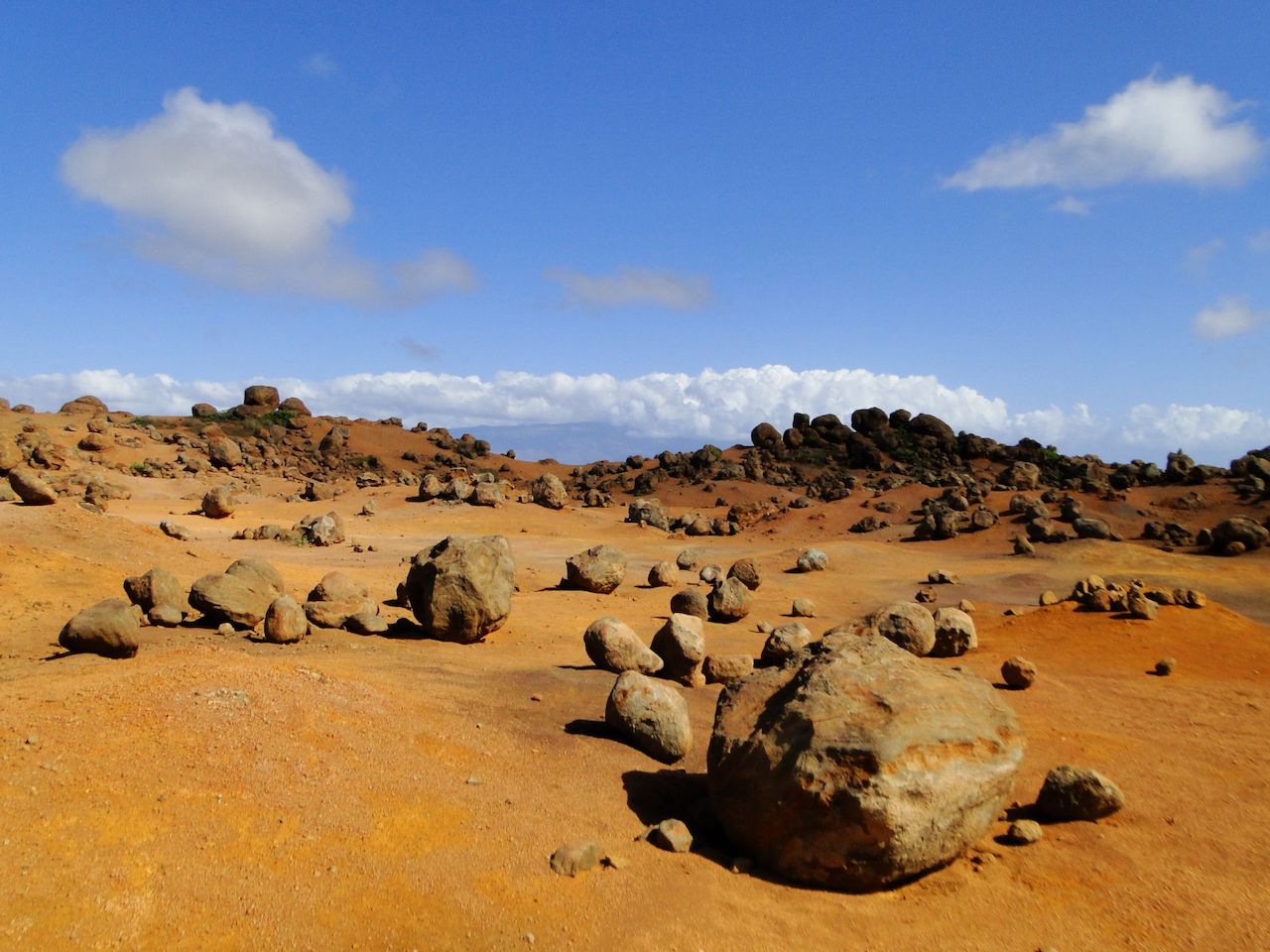 Keahiakawalo, otherwise known as the Garden of the Gods, is accessed by a long dirt track. Boulders are strewn across the landscape, which is tinged with hues of red, orange, and ochre. The volcanic rock formations here stretch as far as the eye can see, making for a stunning spectacle. At sunrise and sunset, the colors are illuminated in an incandescent glow, enhancing the scene further. In the other direction, Maui can be seen across the channel in the distance. If it weren’t for that fact, you would feel as though you had been transported to another planet. It’s an atmospheric and peaceful spot, and, what’s more, you will likely have the lunar-like landscape to yourself. 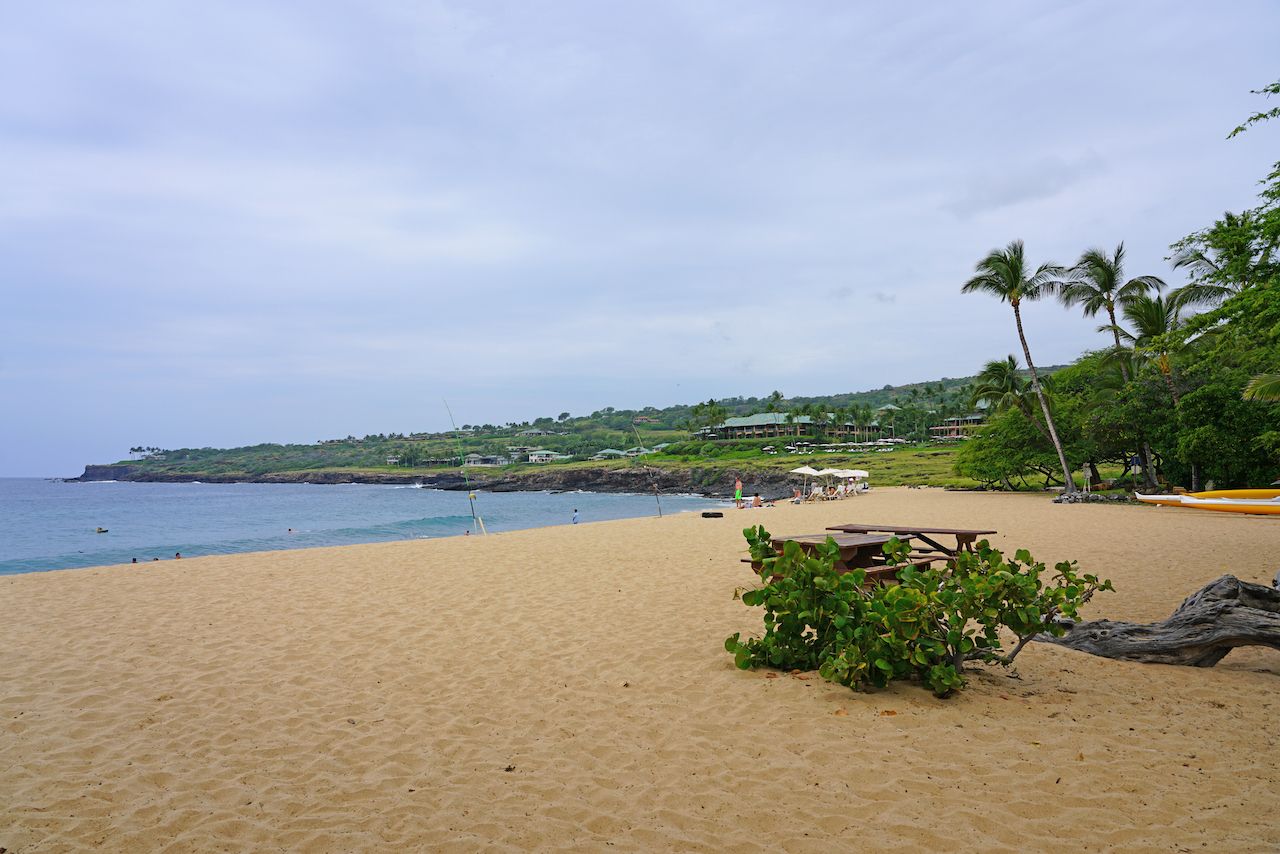 You don’t need a jeep to reach this beach, but it’s nevertheless worth including in your itinerary. At the end of a steep twisting road, Hulopoe Beach is excellent for both swimming and snorkeling. Incredibly the weather here is always sunny, even when it’s raining in Lanai City, only seven miles away. A campsite on the beach has grills and picnic tables, making it hard to imagine a more appealing spot to pitch a tent. There are also well-maintained restrooms. A short trail follows the red cliffs, from where you can watch the waves crashing against the rocks and look down upon colorful rock pools full of fish. Puu Pehe, also known as Sweetheart Rock, is an 80-foot rock formation that can be seen from the clifftop. 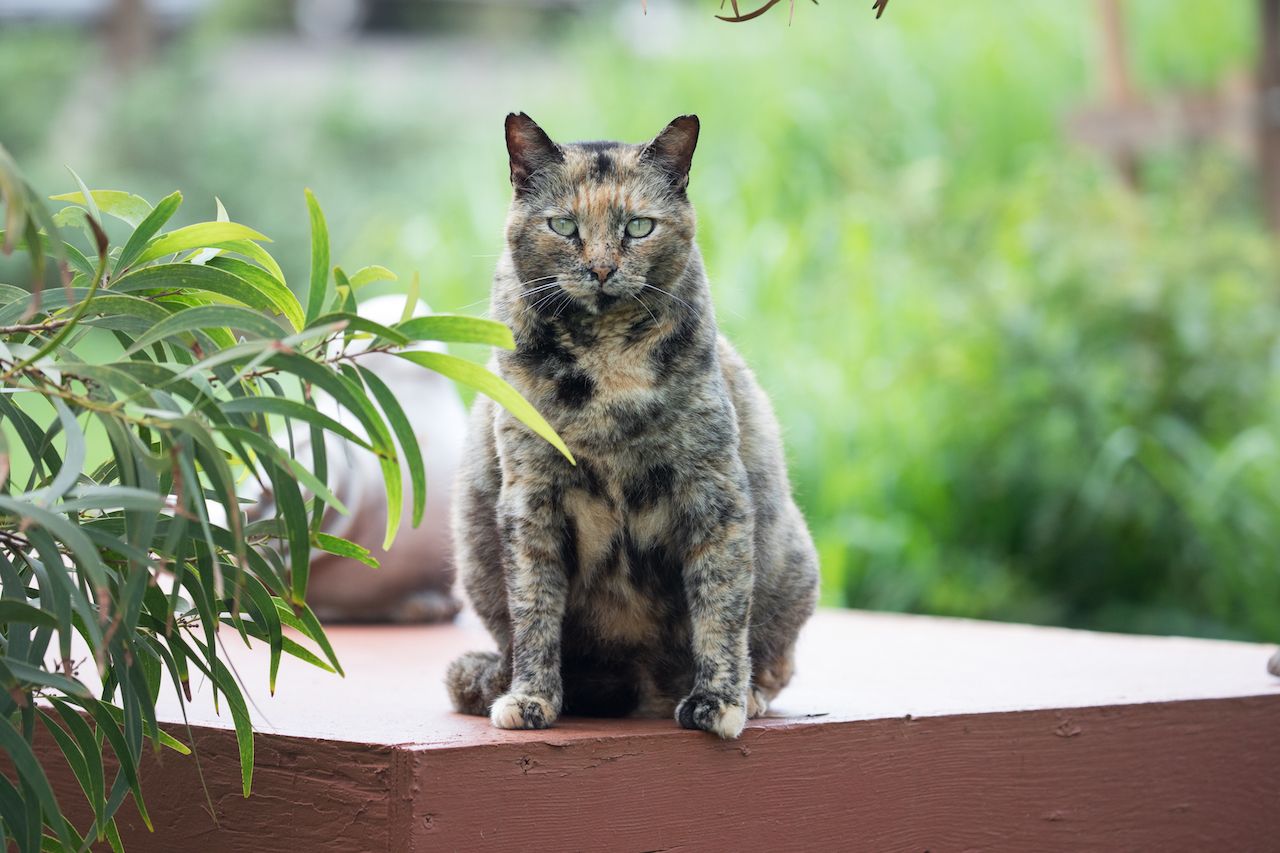 For cat lovers, the impressive Lanai Cat Sanctuary, just a couple of miles from Lanai City, is an unexpected delight of a visit to the island. The cats who live there are all feral and have been given a happy and safe home in this tropical sanctuary. Not only does the sanctuary play an important role in caring for the cats, but also protecting native birdlife. Staff are happy to give visitors a tour and introduce them to the residents. Visitors are encouraged to play with the cats who vie for attention. Meals are served at the cat-fur-teria and younger cats romp around in the kitten-garten. The cats even have a choice of accommodation, from small wooden houses to apartments or snug baskets. Entrance to the sanctuary is free (although donations are gratefully accepted), and cats are available for adoption. 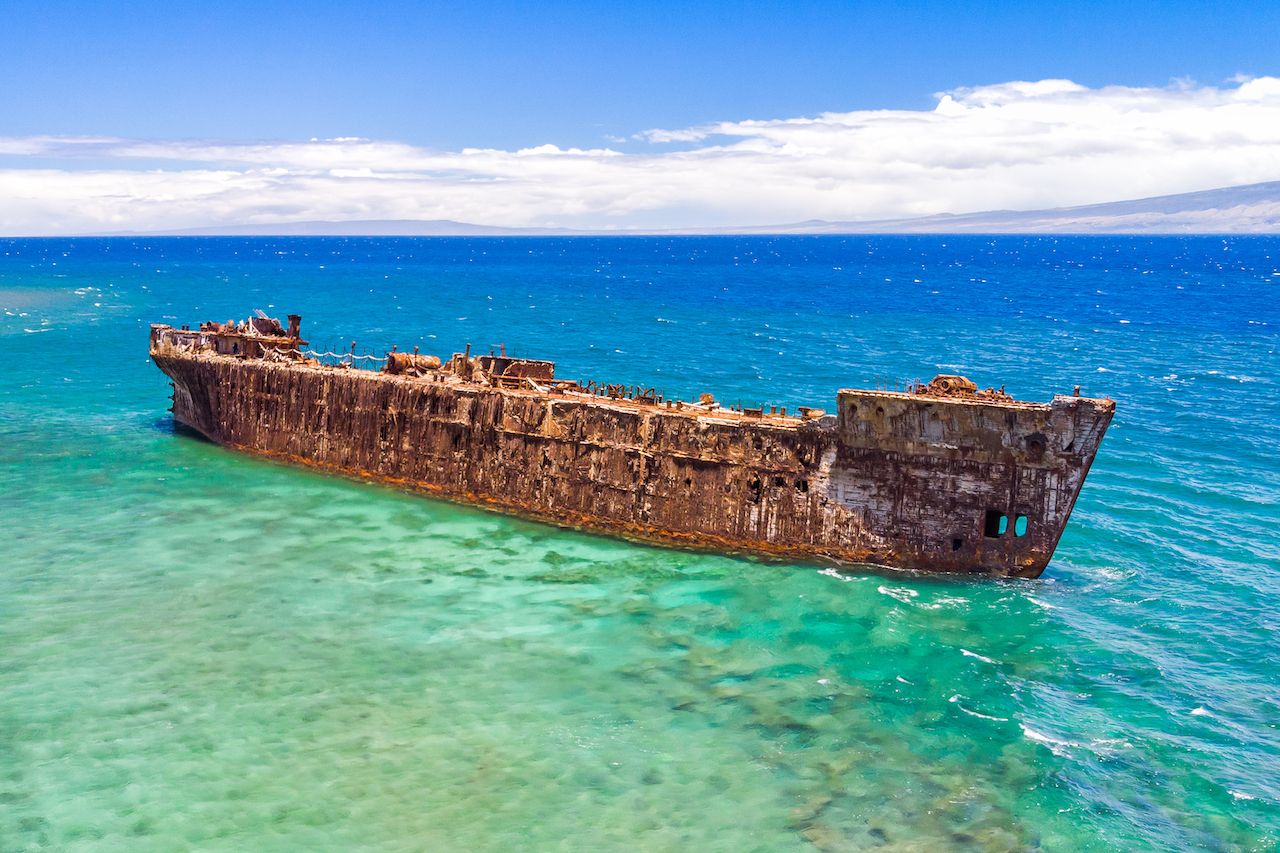 A dirt track winds its way down to the isolated Shipwreck Bay, where the eerie vision of the ship, Liberty, sits marooned on the coral. Due to the strong current, this isn’t a swimming beach, but it’s a beachcomber’s heaven. A deluge of flotsam washes up on the shores, providing foragers with some interesting finds. In addition to beachcombing, the seven-mile-long beach is great for sunbathing, picnicking, fishing and hiking. Again, it’s highly likely that you won’t cross paths with anyone when visiting Shipwreck Beach. It’s wild and windswept, yet alluring and the perfect place to find solitude. 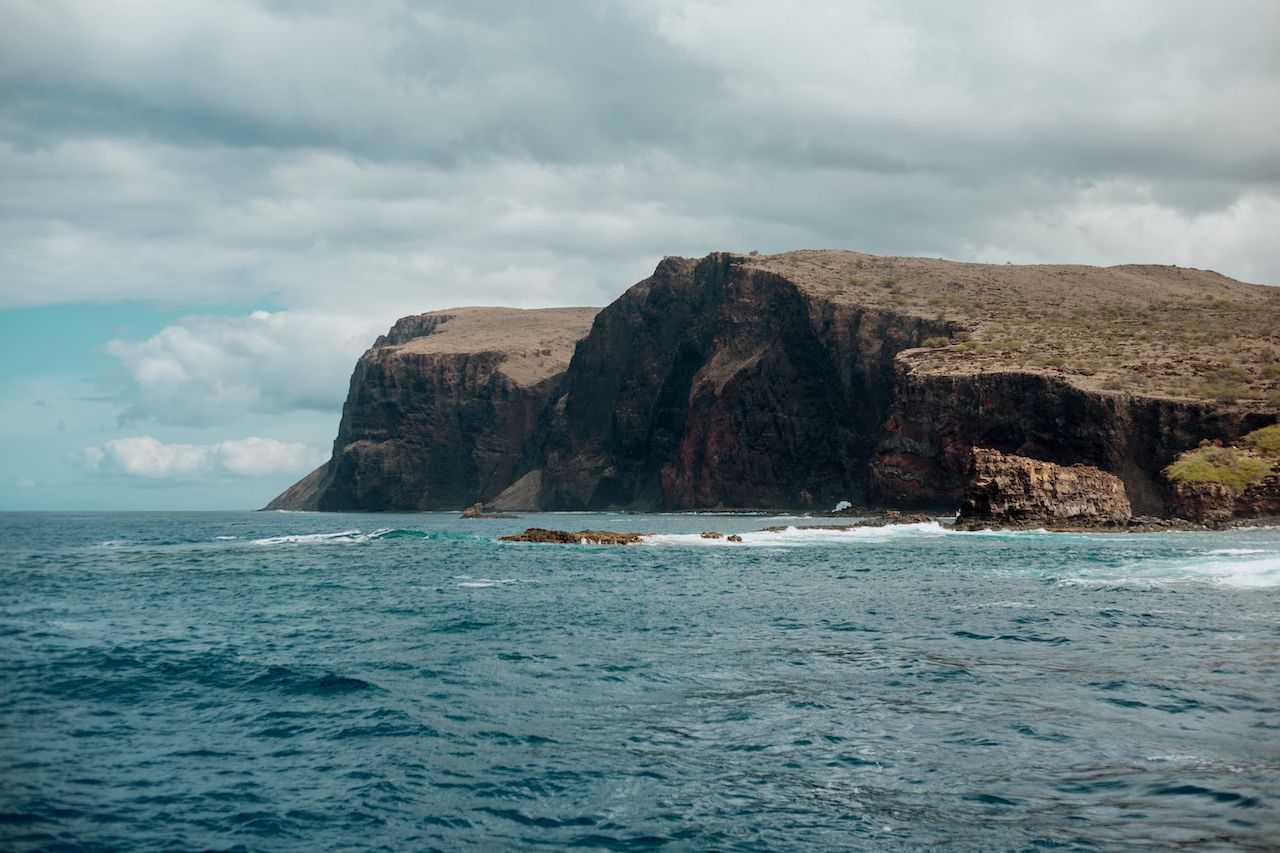 The bumpy road to the former fishing village/royal compound of Kaunolo is another route that requires a 4×4 vehicle. This was where King Kamehameha the Great lived between 1778 and 1810 with his devoted subjects. The village consists of the ruins of 86 house platforms and 35 stone shelters, all of which are well preserved. A hike up to Warrior’s Leap leads to the spot where the king’s men would dive 63 feet into the ocean below to prove their bravery. Perched on 3,300-foot-high cliffs, Kaunolo is a perfect place to watch the sun go down.