When people think of traditional holiday meals in Russia, caviar, blinis (Russian pancakes), pirog (baked dough with a sweet or savory filling), and aspic (meat-filled jello) come to mind. Yet the dish that must be included in any Russian celebration is actually French Olivier salad.

French Olivier salad is named after Lucien Olivier, a chef of French descent who owned The Hermitage restaurant in Moscow in the 19th century. According to one legend, the dish came about when Olivier made “Mayonnaise from Poultry” with mayonnaise, partridge, grouse, veal tongue, black caviar, and boiled crawfish tail. In the center, he made a pile of hard-boiled eggs, pickles, and boiled potatoes. When it came time to eat, to the chef’s horror, diners ruined his culinary masterpiece by mixing all of the food on their plates into some kind of salad.

To express his displeasure, Olivier himself combined all ingredients and called it the Olivier salad. This new dish became so popular that without it, “dinner was not dinner,” as remarked Russian writer Vladimir Gilyarovsky in his book Moscow and Muscovites. Olivier never shared his original recipe, but it was always extravagant and designed for the rich using the most expensive ingredients at the time. After his death, the salad took on many different names (including Russian salad, Stolichny salad, and Soviet salad) and was recreated according to memories of sous chefs and regular clients.

After the October Revolution of 1917, however, many popular dishes, including Olivier salad, were rejected as symbols of bourgeois lifestyle. Yet by the 1950s, Olivier salad was back on Russian festive tables and restaurant menus. In this iteration, ingredients like caviar and crawfish were omitted while others like partridge, grouse, and veal tongue were replaced with bologna, beef, or chicken. New ingredients made it into the dish, as well, including onions, carrots, and peas.

Growing up in Saint Petersburg, Russia, I remember eating Olivier salad for all family celebrations. I often helped my mother cut ingredients and decorate the dish with “daisies” made of hard-boiled eggs. We may not often have caviar for our festivities, but we always had Olivier salad and ate it as an appetizer. To this day, you’ll see it on party tables around the country, especially during New Year’s celebrations. 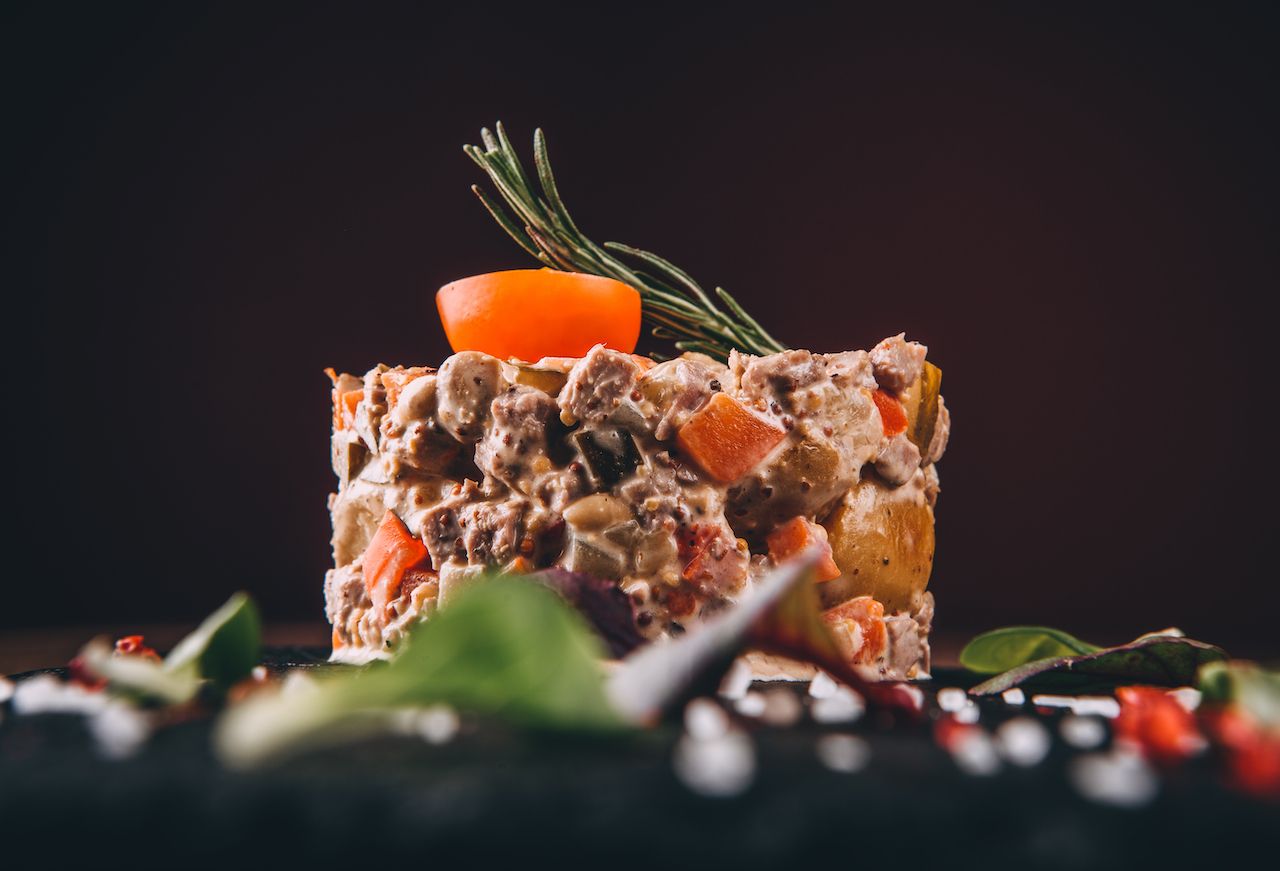 The basic version of the dish is made with bologna or boiled beef while its more sophisticated varieties are prepared with salted salmon, shrimp, crab, beef tongue, or caviar. Pescatarian versions contain boiled fish (usually cod or pollock). Salad can include both pickles and cucumbers. In private homes, Olivier salad is usually served in big bowls while in restaurants it’s served on plates or in tall crystal glasses.

The beauty of dishes is very important for Russian cuisine, and there are numerous ways to decorate Olivier salad with shredded hard-boiled eggs, little piles of caviar, or flowers made of vegetables. 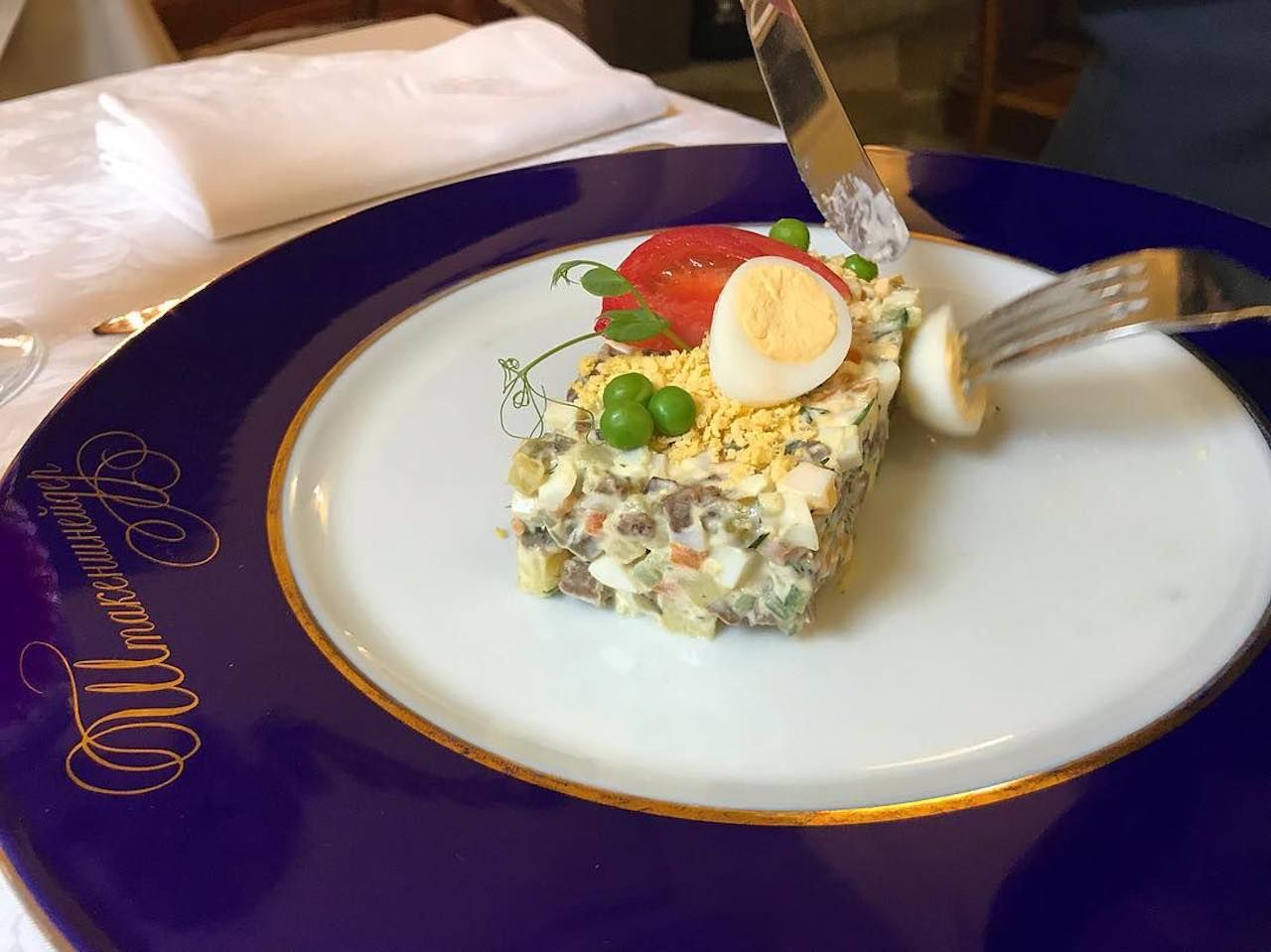 Olivier salad is popular and can be found in numerous eating places in Saint Petersburg, especially those offering European cuisine. It’s also included on the menus of restaurants specializing in Russian cuisine (Russkaya kukhnya) — some even serve Olivier salad prepared according to the fancier original recipe by Olivier.

Shtakenschneider: Situated in the historic downtown, this place has long been among the centers of cultural life in imperial Saint Petersburg. The restaurant, named after the architect of the building, has an aristocratic sophistication with fancy décor and a refined atmosphere. Prepared from old-time recipes, Russian and European dishes are served on exquisite porcelain plates made at the Imperial Porcelain Factory. Although a little pricey, Shtakenschneider is worth visiting.

Literaturnoye (Literary) Cafe: Located in the 18th-century building once owned by the confectionery Wolff & Beranget, this cafe was a gathering place for writers such as Alexander Pushkin and Fyodor Dostoevsky. When an elite restaurant replaced the confectionery, celebrated musicians Feodor Chaliapin and Pyotr Tchaikovsky often dined there. Today, visitors are attracted by the elegant interior decorations, art performances based on Russian music and poetry, and Russian-French cuisine prepared according to 18th-century recipes. The Olivier salad is not to be missed here.

La Russ: Found in the city’s historic center close to the Hermitage Museum, La Russ serves modern Russian cuisine. Visitors will be impressed by its romantic atmosphere and the royal style decorations: the imperial crown, the little carriage, and the throne. The restaurant offers entertainment, including music, dance, and singing shows à la russe. Few things compare to Olivier salad with a traditional show.

Cafe Izba Russkaya Kukhnya: For those who fancy dining in a traditional Russian log cabin, this cafe is the right place. Its interior imitates the decor of a Russian rural house with woven rugs on wooden benches, samovars (tea urns) on wooden tables, and colorful hand-made carpets on the walls. Russian and Ukrainian foods are served in ceramic dishes. While waiting for their orders, visitors can play chess, checkers, or domino. This is one place to find an Olivier salad for the common man that’s just as delicious as the fancier options.