2020 has been the year to get out on the road. It seems everyone has decided to try an RV trip across the country or to spend the online school semester on four wheels — with record RV sales and more people setting out on their first #vanlife excursion. Even among those who aren’t planning to ride out the entire pandemic on the road in an RV, van, or Airstream, the popularity of vehicle-based vacations has soared this year.

There are plenty of ways to drive, and which option is right for you depends on a lot of factors. We can’t make those decisions for you, but we can help you think about what really matters to you. Here’s what to keep in mind.

The size of your group and your stuff

This is the most obvious first consideration. If you’re a family of five, a van may just be too tight. Or if you are three travelers with two big dogs, you’ve probably sized yourself out of a van. But that doesn’t mean that bigger is best, since smallness has its own appeal.

“Everything is compact. You live in a compact space with limited resources,” says San Francisco resident Nina Thompson of life in an RV. Every year, Nina and her husband, along with their two kids and their cousin, take a late-summer RV trip. For Thompson, that compactness is part of the appeal. Thinking of her kids, she says there are “a lot of practical life skills you get when you go on a trip like that.”

Your need for comfort 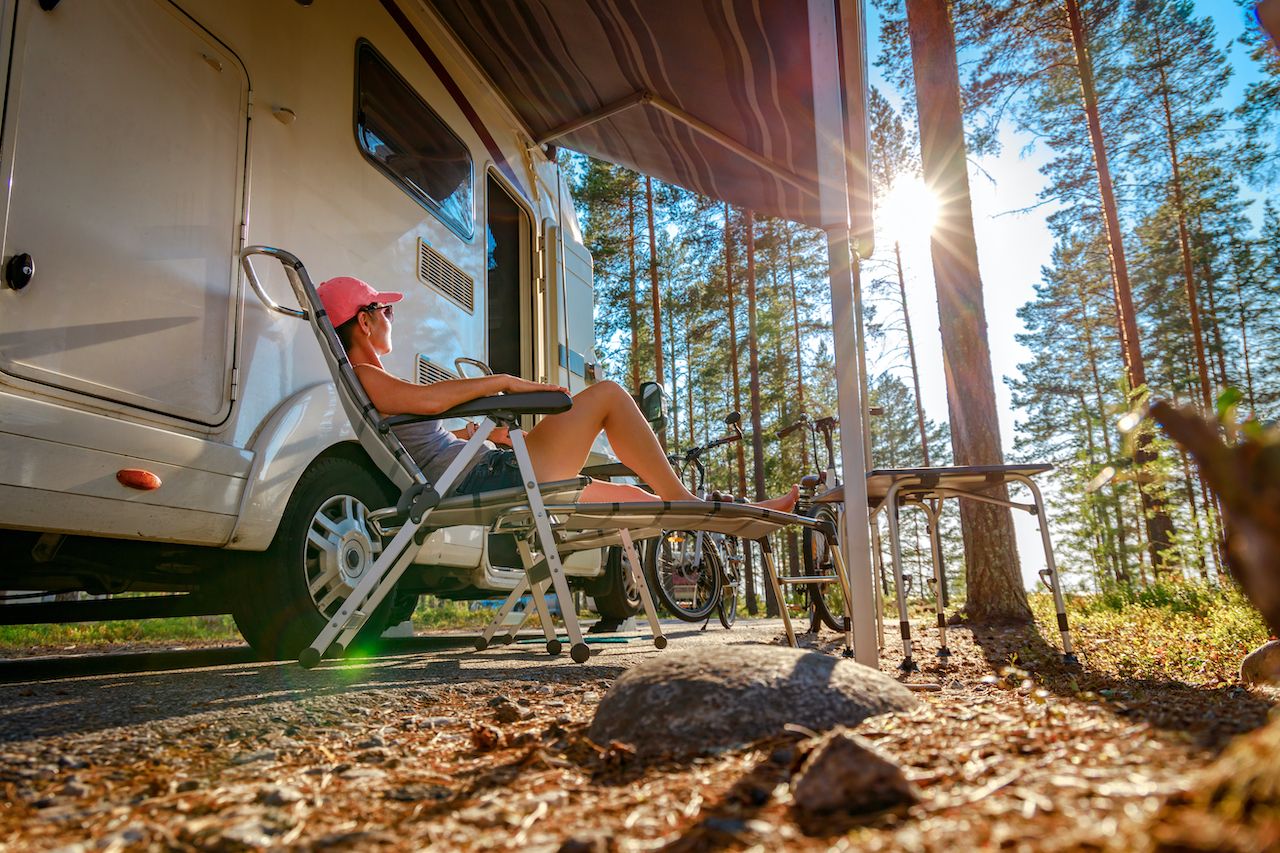 Becca Worple and her husband sold their house in Ohio and set out West with their son and two big dogs. After making it all the way to Southern California, they turned around and went back, picking up their daughter in Boston and then exploring the Northeast, reaching Maine — logging over 16,000 miles. For them, an RV gave them control over their environment, something Worple found appealing during the pandemic.

“I loved it,” said Worple, who said the family was self-sufficient, not eating at restaurants or going into stores. With comfortable beds and warm showers, Worple appreciated being “able to pull up into an RV park and have your world right there.”

Not everyone sees the RV amenities as a necessity, even on a longer trip. Suzie Black and her husband Matt Mohr are taking their eight-year-old daughter “roam schooling” in their sprinter van this fall since her classes are online anyway. They’ve been traveling from Seattle to Southern California and Utah, and then will head back to Seattle.

The lack of a shower can catch up with them in some spots, says Black, laughing that, “Five days without a shower and then we’re all pretty gross.” But most of the time they can find a campground or a HipCamp to stay at when they need to. 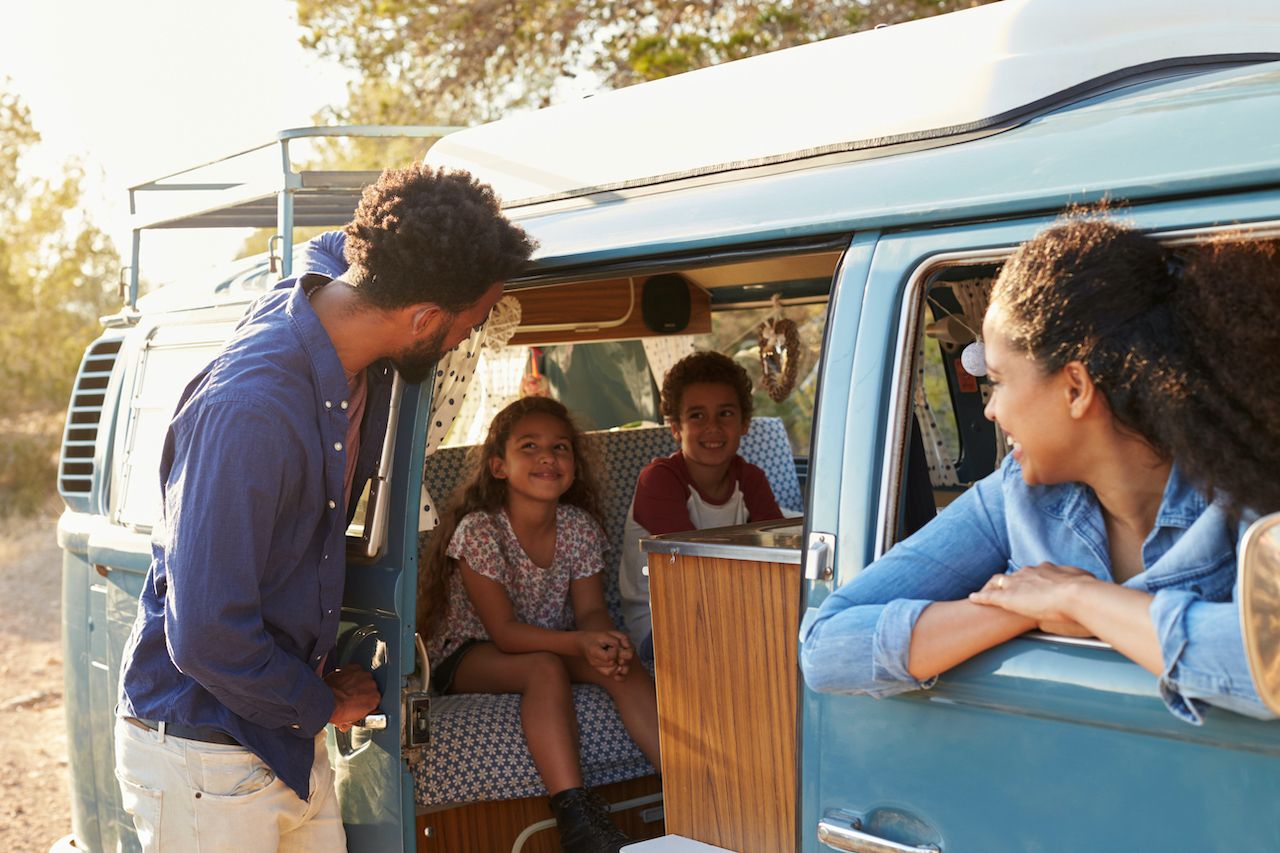 Whether you’re a planner or spontaneous matters here. Given the size of RVs, you’re more limited in where you can park, which can require making reservations in advance. Especially this year, when so many people were on the road, Thompson and Worple say they had to plan in advance where they wanted to stay in the RV.

“It’s kind of frenetic outside national parks because there are so many RVs,” says Thompson. However, she notes that there are plenty of other places to stay as well, such as BLM land and national forests.

Vans, on the other hand, don’t require advanced reservations much of the time. “Sprinter vans are more conducive to our kind of lifestyle,” says Black. “The van is pretty stealth. We can park anywhere, and we just look like a delivery van — with mountain bikes and surfboards,” she says.

How handy you are

Both RVs and vans can break down, and mechanical hiccups are an issue you will hear from pretty much anyone who spends a lot of time in these sleep-ready vehicles.

“Make sure everything works before you leave” is Thompson’s top piece of advice to anyone setting out on an RV trip for the first time. She recommends ensuring the refrigerator works, there’s enough water, the heater is functioning, the generator works correctly, and so on.

For some, this could impact whether they opt for a van, since often vans are tricked out by their owners. Black’s husband Matt Mohr did most of the work for their sprinter van, building out the interior. While he did hire someone to get the electrical done — installing three golf cart batteries that regenerate when they are driving — he would be able to fix them on his own if needed.

If you’re planning to rent a vehicle, a van will likely cost less than an RV to rent. When my daughter and I took an eight-day surf trip along the California coast last August, the low-budget van we bought — outfitted with a fold-out bed that was so complicated we left it open, as well as a sink and a Coleman stove in back — cost much less than what we would have paid for an RV. Likewise, our gas bill was lower than it would have been in a larger vehicle.

On the other hand, buying a used RV can be less expensive than a van, unless you manage to find a second-hand van. Black says that although her husband did the work on their sprinter van himself, you can buy ready-made kits to outfit your vans from places like Adventure Wagon in Oregon, which start at $12,500 apiece. If you opt for a previously owned Airstream, though, you aren’t likely to get the same savings as on a typical used RV or van, as Airstreams tend to hold their value.

Both Thompson and Worple say gas mileage was a factor in choosing their RV, whether renting or buying. Thompson says she and her family opted for a relatively small RV for a lesser carbon footprint. Worple said the 25-foot RV she and her husband purchased had streamlined features that would permit better gas mileage. Airstreams, as the name suggests, are the most streamlined RV option of all. If even lower fuel consumption matters to you, then a diesel sprinter van is going to consume less fuel and have the lowest emissions. 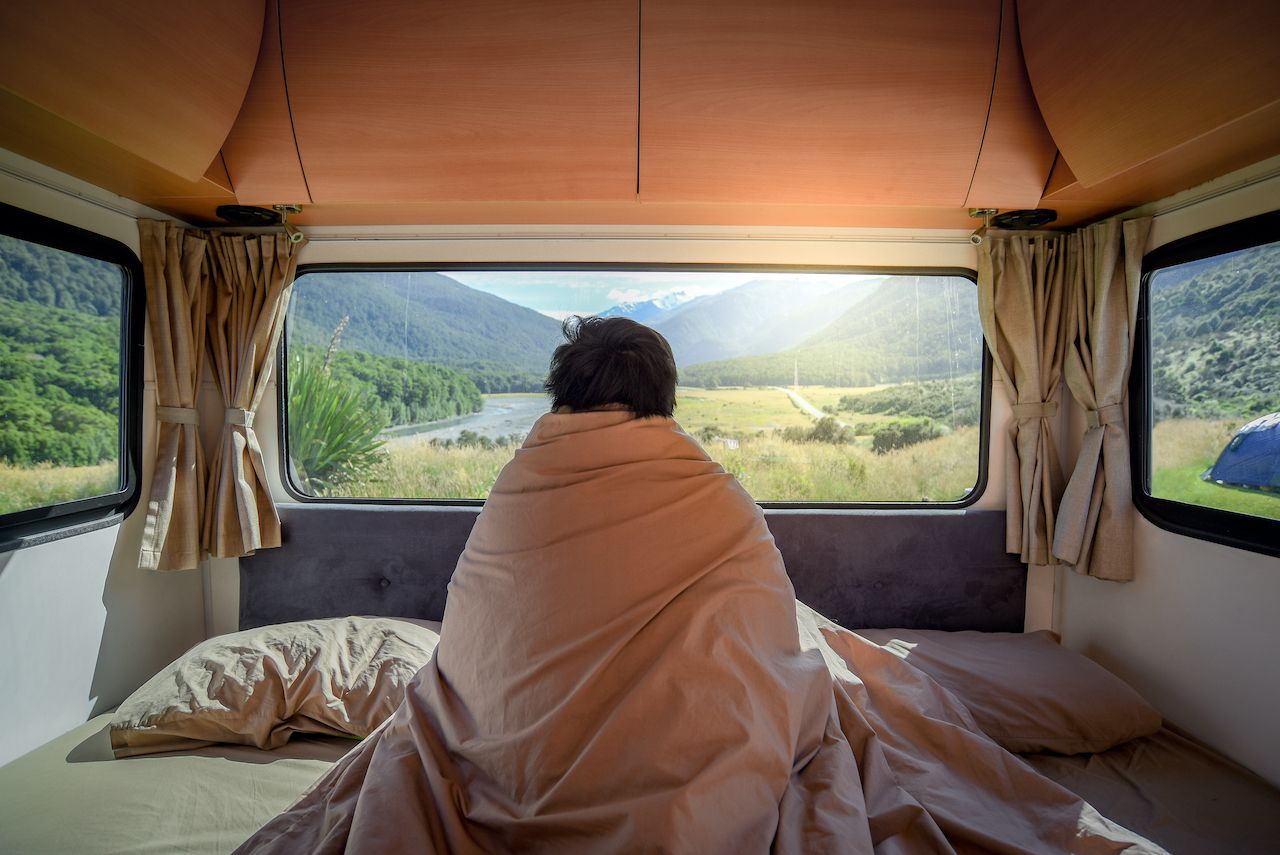 While RVs come with air conditioning and heaters that can handle any weather, that’s not always the case with vans. If you want to use a van to get out in the snow, there are several winter-ready vans you can rent. For their part, Black and Mohr are planning on installing a heater that will run on their car’s diesel engine, so they can take it on ski trips this winter. In the meantime, it’s just not up to the cold weather. Although it’s sunny this week in Utah, snow is coming, and Black suspects they’ll need to check into a hotel.

Likewise, if you find yourself traveling in a very rainy location, ask yourself whether your van set-up can support you cooking and eating inside. Some less expensive vans have the kitchen accessible only via an open trunk — a non-starter in heavy weather. 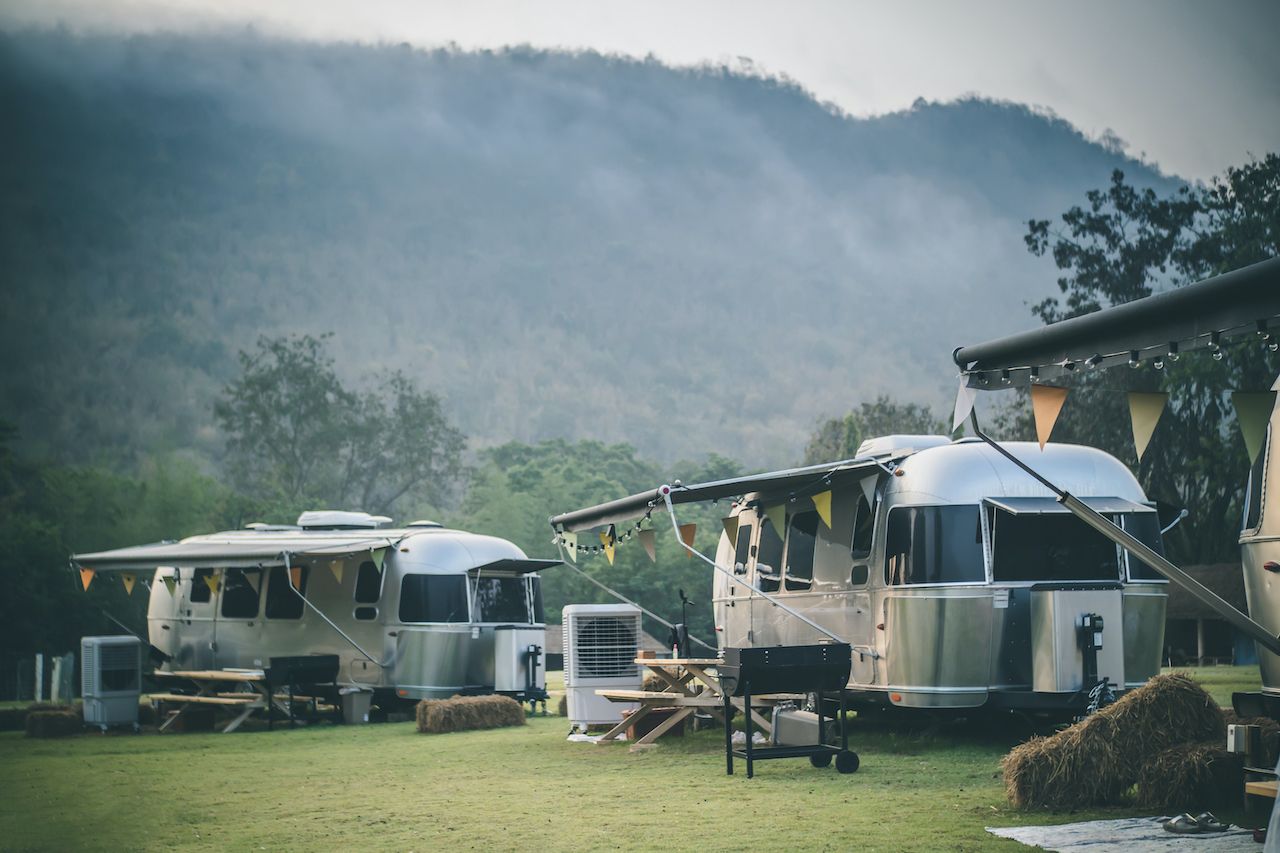 There’s certainly a coolness factor in #vanlife, and maybe that’s important to you. Black and Mohr, both surfers from Australia, worked as ski guides in Whistler for years. Somehow, they’re the hip people you’d expect to opt for van life. But their daughter is now eight, and they are beginning to feel the tight space. As long as the weather is good, their daughter can play outside when Suzie is cooking, but she knows they won’t be able to pull off van life too much longer.

If you want to have your comfort and your coolness, too, then an Airstream would be the option for you. Airstreams are RVs but with an aerodynamic style and a cool, retro-chic outside. In the same way that you’ll find #vanlife communities online, #Airstream is also full of stunning images — albeit not nearly as many. Inside the sleek, silver Airstream, you can opt for not just the comfort of a typical RV but the luxury of real wood finishes, high-end kitchen appliances, and anything else you might want for your home on four wheels.

Where you want to go 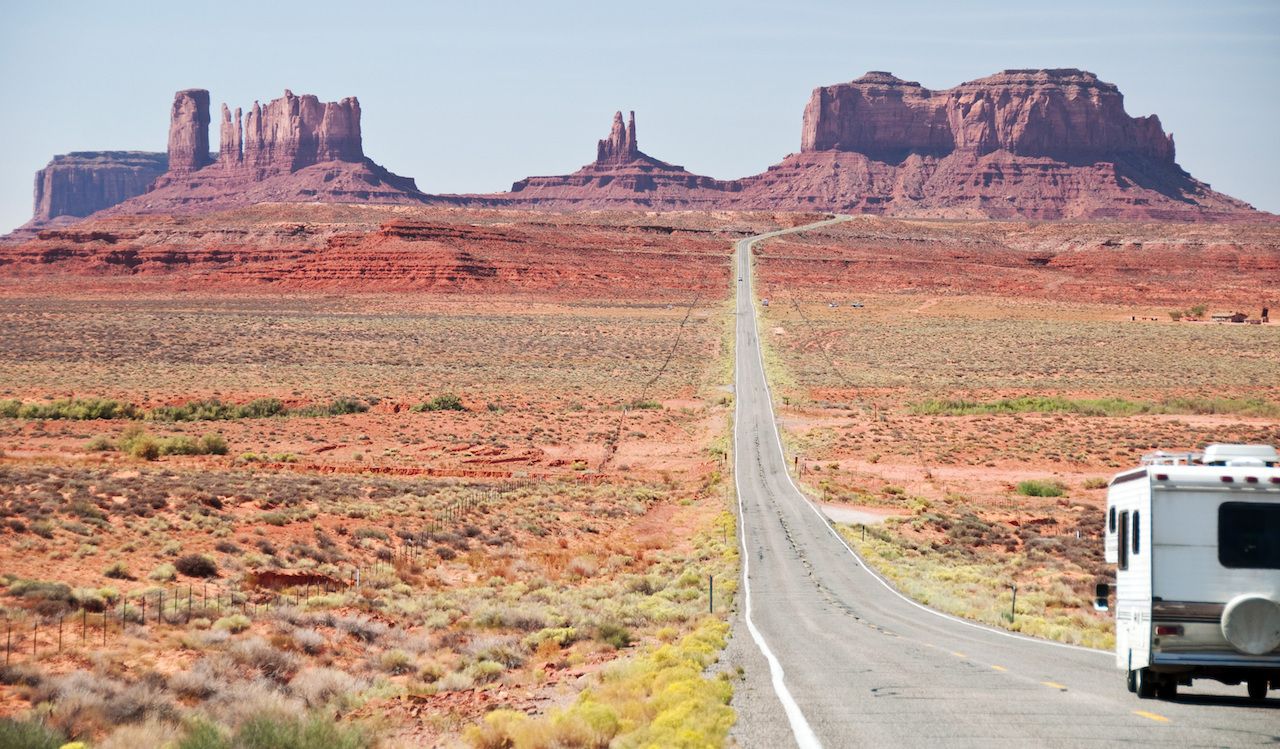 One reason Black so appreciates being able to park their van anywhere is that she and her husband actually owned a Winnebago when their daughter was younger. Although they had plenty of space, they couldn’t park everywhere they wanted to when visiting their friends in cities or certain beach towns. RVs don’t fit in many urban driveways, and some communities just don’t like to see RVs hanging out too many days — or even one night.

On the other hand, for wide-open spaces, either an RV or van works — as long as you can fit enough supplies in your van to get off the grid. Ultimately, that’s a freedom afforded you with any vehicle.

In our current COVID-19 world, when people might be seeking more self-contained travel, it’s important not to lose sight of what made RVs and vans great in the first place: the ability to get to places you can’t really access any other way.

As Thompson says of her family’s trips to places like the Navajo Nation or throughout the Southwest, “It’s an opportunity to see a part of the US that’s hard to see when you travel by plane,” she says. “Everywhere we’ve been, you can’t just fly there and see that stuff. Whether it’s an RV or not, driving through all that space is an experience in itself.”

LifestyleRez Roads Is Bringing #Vanlife To the Navajo Nation
Tagged
Road Trips
What did you think of this story?
Meh
Good
Awesome

May 9, 2022 Jason Barnette
✖
travelstoke
Download the mobile app
stoked by