The Navajo Nation is about the size of West Virginia. Nearly surrounding the four corners of the American Southwest, the country’s largest Native reservation encompasses 27,000 square miles across three states: New Mexico, Utah, and Arizona. To Chantal Wadsworth and her partner, Vernan Kee, who both grew up in the Navajo Nation, this land was mostly all they knew. Growing up here meant becoming accustomed to seeing — and often experiencing — poverty. Opportunities to travel were few and far between, even on tribal lands.

“We’re a Navajo couple from the Navajo Nation, trying to learn more about Navajo culture, the history, the land, and stories,” Wadsworth says. “Growing up on the Navajo Nation, you’re always outdoors. So our love for the outdoors was there as a kid.” 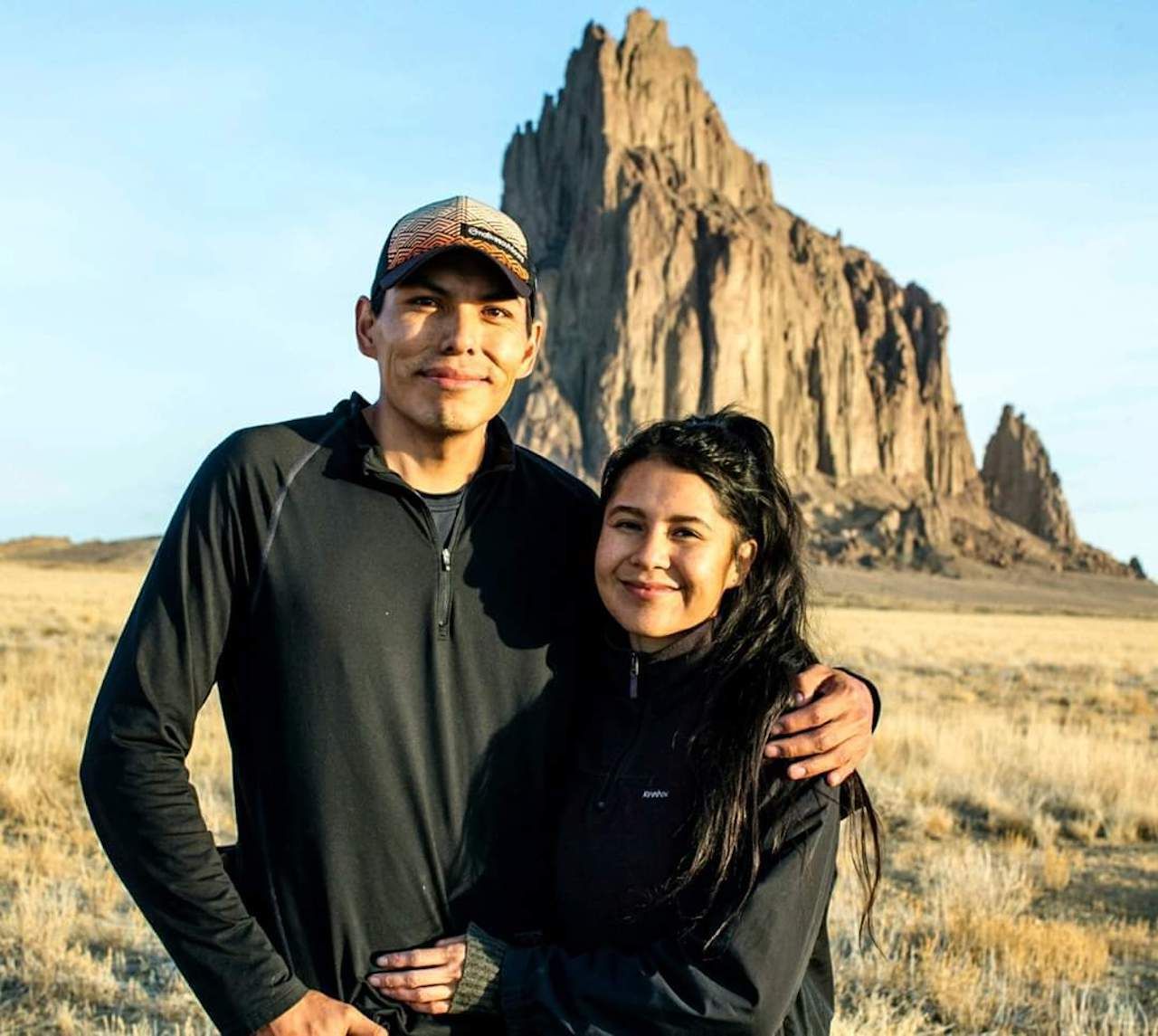 Getting older, the lack of opportunity on the reservation became a stark reality. Most youth, including their peers, leave the reservation at some point, whether for education or employment. The pair was no different, moving to San Diego to study and work. There they fell in love with the ocean and the mountainous terrain of inland southern California, firmly rooting themselves as “outdoorists.”

The couple stayed for nearly eight years. The #vanlife movement, long a staple of surf and climbing culture in California, was just picking up steam throughout the country. This seemed an approachable way to travel for Wadsworth and Kee as it would enable them to spend their lives outside while working remotely.

It was this passion for exploring and understanding the natural world around them that brought them home to the Navajo Nation. They gave up everything — their apartment, their possessions, and any semblance of what a “life of opportunity” off the reservation was supposed to look like. Instead, they headed back to their roots.

“We were drawn to that life of always being on the road, always being outdoors,” Wadsworth says. “We didn’t want to just explore any place. We definitely wanted to come back to our homelands, where we grew up, and explore more of where we came from.”

So the pair bought a 2018 Ford Transit van and prepped it for the road, installing a solar panel and a Yeti 400 power battery. They made the inside straightforward — a bed, a drawer, and a basic seating arrangement.

“We definitely did have to build everything from the inside out,” Wadsworth says of their ride. “And we’ve rebuilt it a couple of times. As you live in a van full time, what you think you want changes.”

Growing up, she rarely explored beyond her community. “I never really got to see other places, other parts of the Navajo Nation where a lot of important monuments and sacred sites are.” Rez Roads, as Wadsworth and Kee’s #vanlife project would come to be known, would change that.

The goal of returning to the Navajo Nation was, initially, to learn about the couple’s homeland. It quickly became bigger than that, showing others that the Diné people, as Navajo call themselves, have an important place in the future. “We wanted to learn more about ourselves as Navajo people,” Wadsworth says.

No one else on the Navajo Nation had done this before — at least not like this. No #vanlifers, no RV-dwellers. “We haven’t come across another Navajo person, or even another Native person doing this,” notes Wadsworth.

The reaction, for the most part, has been shock and awe. A young couple traveling in a van, documenting their experience to educate themselves and others about their culture, tends to require a bit of an explanation.

“A lot of people mistake us for some kind of emergency service, like a medical van or an ambulance,” Wadsworth explains with a laugh. “That was the first thing that people thought of when they saw our van. It’s just so unfamiliar.”

Just telling people where they’ve been is also inspiring others to follow, at least in spirit. Their Instagram page is approaching 2,000 followers, and the couple, graphic designers by trade, have launched a merch store to support their efforts and to help spread the word. They’ve also added a trailer to accommodate some of their belongings and make room for the six dogs that travel with them.

“People say, ‘Oh, my grandma used to go there!’ and ‘I’ve never been there but I’ve always wanted to go!’” Wadsworth says. “It sparks their interest, like, ‘Hey, I’ve gotta go visit these places and explore where we came from.’”

Many places Wadsworth and Kee visit are on private Navajo Nation land and aren’t accessible to the general public.

“We don’t highlight those spots on Instagram,” asserts Wadsworth.

Of the spots anyone can visit, the Bisti Badlands south of Farmington, New Mexico, just off the border of the reservation, is among their favorites.

“It’s kind of hidden and not so popular,” Wadsworth explains. “But it’s a very vast area — it’s kind of like you’re on another planet. The rock formations are very unique.”

Other favorites include Spider Rock, in Arizona’s Canyon de Chelly, and Monument Valley — the couple highlights spots like these on their Instagram page. The non-publicly accessible areas, however, remain a mystery. Wadsworth encourages visitors from off-reservation to visit the Navajo Nation website for guidance on where to visit, and to remember to register for an overnight camping permit.

To further their impact, Wadsworth and Kee work closely with Natives Outdoors, an organization working to educate and empower Indigenous communities through “products and storytelling for a sustainable world.”

“They do a lot of great work to bring information to the general public about Navajo Nation outdoor recreation.” She notes that their mission aligns closely with that of Rez Roads — their biggest hope is to preserve Navajo culture and the language of their ancestors. “In the 21st century, with modern culture and modern ways, the Navajo culture and the language is fading,” laments Wadsworth. “I don’t want anything like that to happen. I don’t want, 20 years from now, no one to know what Navajo people are or know what the Navajo language is. That would be heartbreaking.”

If Rez Roads can help visitors to the Navajo Nation make the connection between the people and the land and value ancestral traditions and customs, Wadsworth says they will have accomplished their goal.

“I just hope that people, when they come to our Instagram page, I hope they learn a little bit more about Navajo people themselves,” Wadsworth concludes. “And more about the connection that we have with the land, and with everything that we find sacred about it. I think that’s the whole push that we’re trying to do.”