In 2010, Leah Penniman co-founded Soul Fire Farm on an 80-acre plot in Petersburg, New York, with a three-tenet mission: create equity in land ownership, reverse the damage caused by industrial agriculture, and distribute fresh produce to people living under food apartheid. The farm is run by Afro-Indigenous people using ancient farming techniques, and equipped aspiring Black and Brown farmers to do the same. The ultimate goal is to ensure that by 2050 Black farmers own “100,000 farms on 10 million acres of rural and urban land.” Here, Penniman expands on the principles that guide Soul Fire Farm and explains why racial equity in agriculture is possible, and necessary. As told to Assistant Food and Drink Editor Elisabeth Sherman.

It took hundreds of years to create a food system that’s really rooted in racism. We have 98 percent of the rural land that’s white owned, which has a whole history of land theft and USDA discrimination. And lynchings by the KKK that resulted in the land being lost. So we have a situation where being a farm manager is the whitest profession, but being a foreign worker is the brownest profession, and there aren’t equal protections under the law for farm workers.

We have a situation where, as consumers, if you’re Black or Brown, you’re much more likely to go hungry, to suffer from diabetes, heart disease, kidney failure, and other diet-related illnesses. It’s really throughout the entire food system that we see this disparity.

The ways we’re working on it directly is that our farm does doorstep delivery of free and low-cost food to people living under food apartheid in Black and Brown communities. We build gardens for folks to grow their own food in these same communities. We are training and supporting the next generation of Black and Brown farmers through our on-farm and remote courses, and then providing scholarships, job placement, and land matching to our graduates. And then, of course, we organize for systems to change. 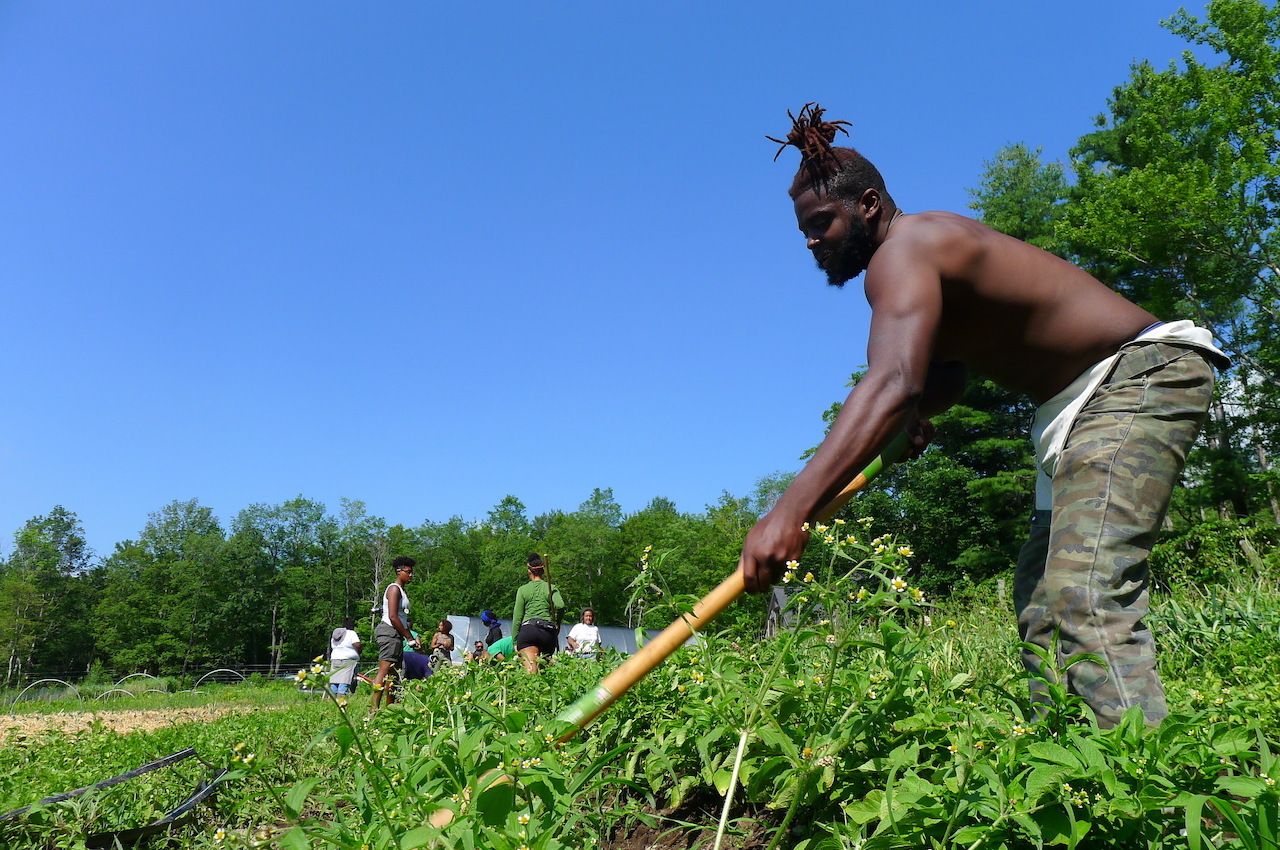 I would say among our top priorities would be passing the Fairness for Farm Workers Act so that farm workers have equal protection under the law. And then figuring out how to flip the subsidies in the farm bill so that it’s not corporate commodity agriculture that’s getting billions of dollars, but instead it’s these smaller producers of fruits and vegetables and what they call “specialty crops” that are getting resources to get their farms off the ground and sustain their farms.

We really believe that it’s impossible to talk about uprooting racism in the food system without full consideration of the sovereignty and rights of indigenous people. Even though as a majority Black organization we are involuntary settlers on this land, we still benefit from settler privilege. We need to make sure that as we do our own work to reclaim our belonging to the land, our ability to have our farms and to feed our communities, that we’re not replicating colonizer patterns.

We were able to start to build a friendship with some folks out of the Mohican Nation in Wisconsin who made a visit. There’s a number of things they asked us to do. One is to organize to stop the pipeline that’s going through Coney Island. We also preserve certain seeds that grow better in the higher light conditions here than they do in Wisconsin, so we’re working on that and remitting proceeds from any seed sales back to the Mohican Nation. Another thing they asked is to have a place where, when they do come out East once every year or couple of years, they could gather on the lands to have their ceremonies and reflection time. 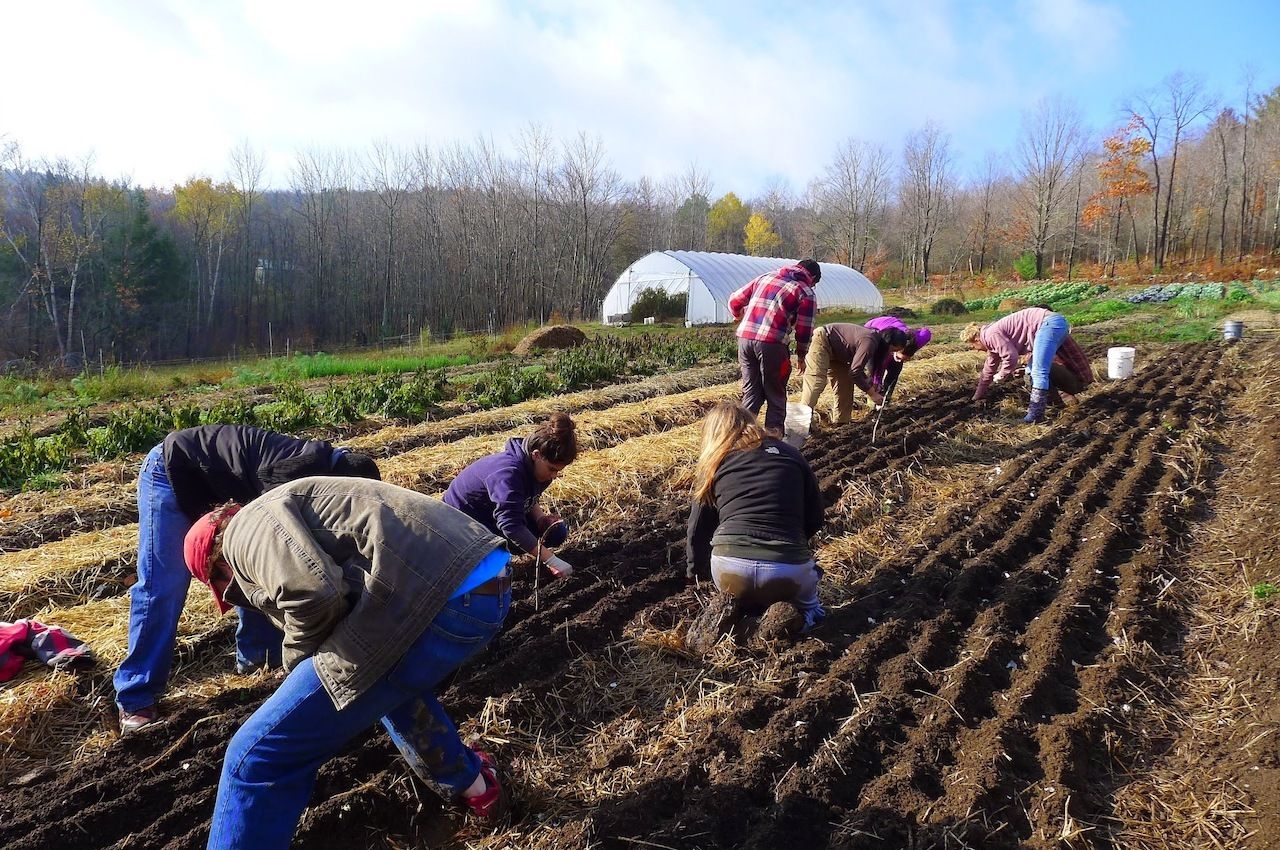 We have a multi-year waiting list for our programs for people who want to farm and haven’t been able to find a program that meets their needs. A lot of Black and Brown folks, when they try to do farm training, they either find that it’s outside of their communities, too expensive, culturally irrelevant, or sometimes outright racist. We had one young person say that they tried to do an internship on a farm, and they were only two days into it when they were picking beans with the white farmer and the farmer said, “So, why is it that Black men are always absentee dads?”

It’s so easy to replicate historical systems of oppression on a farm where you have a white landowner and unpaid Black people bending over and doing the stoop work. That can be very traumatizing. And so making sure that we’re not creating a system that replicates this really dangerous dynamic is crucial, and those are the types of things we keep in mind. 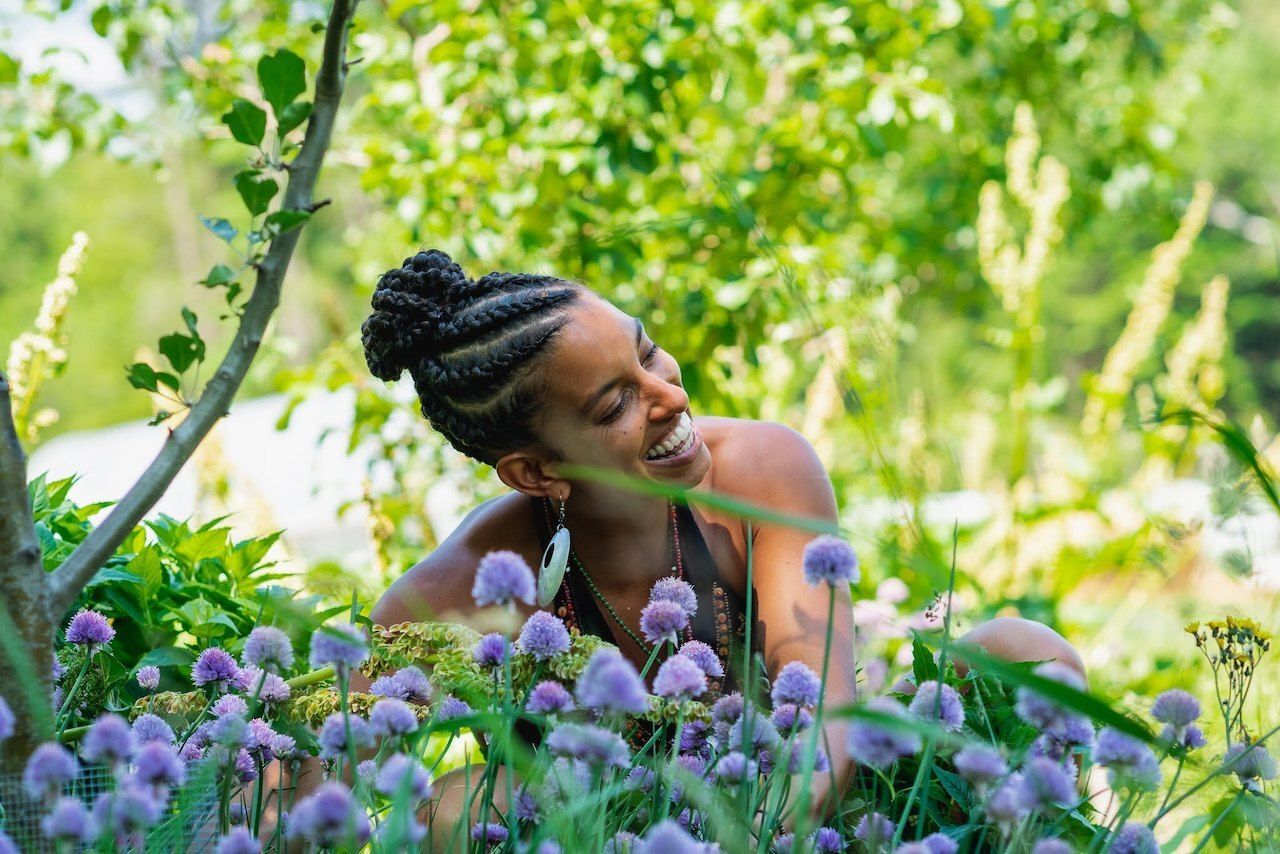 It has been really important for me to learn about Afro-Indigenious farming practices because, as a Black farmer, so many of the messages I got growing up were that the only relationship between Black people and the land was through slavery. We can trace composting back to the work of Cleopatra from 50 to 30 BCE and her protection of earthworms, as well as to the women of Ghana, who developed African dark earth, which is a super rich dark compost. We certainly use those composting techniques and things like the raised beds of the Ovambo people, the polycultures of the Caribbean, as well as certain seed varieties that we keep like the moyamensing tomato, a number of Mohican varieties of maize, and some okra that is important to the Black community.

The Reparations Map came out of the Northeast Farmers of Color Network, and we started building the map in 2017. We had potlucks and started building community with each other. We pretty quickly realized that the biggest barrier that folks had to their farm’s success was secure access to land. People were wage earners on someone else’s farm, or renting land on short-term leases. So that’s why we formed the Land Trust, and the Land Trust can actually receive donations of land, make them tax deductible for the donor, and redistribute them.

But there’s also this more distributed tool of the Reparations Map where Black, Brown, Indigenous, Asian, and Latinx farmers put up their project on the map and ask for what they need. And then people who have generous hearts and open minds can donate directly. We’ve had dozens of people receive resources through the Reparations Map, which is very, very exciting.

BeerBlack Beer Travelers is inspiring people to diversify their palate
Tagged
Activism Food + Drink Sustainability
What did you think of this story?
Meh
Good
Awesome

10 of the most iconic regional sandwiches to try across the United States
New Jersey sandwiches are an art form. These are the 9 sandwiches to try.
Searching for the best Mexican food in Texas? You need to visit El Paso
This neighborhood in New Jersey has some of the best Portuguese food in the country
The difference between butter chicken and chicken tikka masala