When you’re trying to draw visitors to your city, the nickname “City of Trees” doesn’t get people searching for plane tickets.

This, presumably, was at least part of the logic when Sacramento decided to repaint its iconic water tower on I-5 back in 2017. For decades, the tower had stood as the welcoming point to California’s capital, welcoming weary truckers and motorists after their long, hot, flat treks through the San Joaquin Valley to the shady city of trees.

Until one day, Sacramentans woke up and found it had been repainted to say “America’s Farm-to-Fork Capital.”

But a funny thing has happened since Sacramento decided to bestow the title of “America’s Farm-to-Fork Capital” on itself. The world, or at least the state and country, has started to recognize it as a legitimate food and wine destination on par with anywhere else in the Golden State. And a far cheaper and more manageable one at that.

Those arbiters of treadwear and fine dining at Michelin finally came to town this year, bestowing their first star on Sacramento and rating more than 10 other restaurants. The New York Times ran a 36-hours feature on the city, calling out its fresh food and farm-to-fork pedigree. New York Magazine followed suit with a full feature, as did Cosmopolitan.

Grumble as the old-time Sacramentans might, the water tower trick appears to have worked.

A cow town turns its agricultural history into a culinary boom 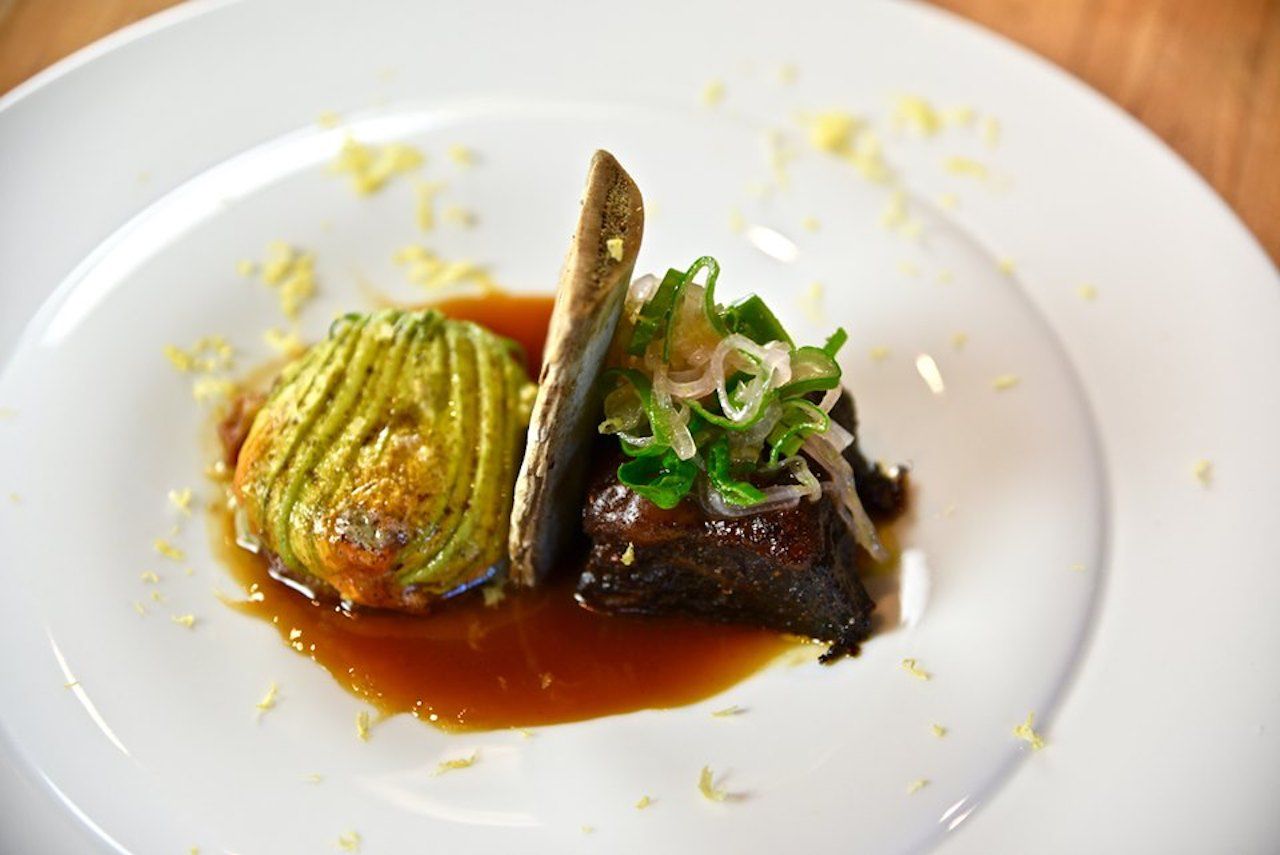 Forgotten after the beaches of LA and the bay views of San Francisco, Sacramento has always been the flat, dusty little brother in California’s family of cities. A cow town. An agricultural hub. Fall asleep on a cross-country flight and wake up on the final approach to Sacramento International Airport, and you’ll likely ask the flight attendant why you’re making an emergency landing in Kansas.

While this doesn’t do much for postcards, it does a great deal for the local food scene. Nearly every restaurant in the city is getting produce days before the rest of California, and a week or more before the self-styled “restaurant capital of the world” in New York.

Because Sacramento is literally surrounded by farms, it’s as close to literal farm-to-table dining as you’re getting in a major city. Within three hours you’ll find over 250 different crops, as well as the caviar industry led by Sterling Caviar, which produces more than 80 percent of the caviar consumed in America.

At a weekend farmer’s market under I-80, the largest farmer’s market in the state of California, owners and chefs from the city’s largest restaurant groups are scouting the wares. Randall Selland — whose Selland group owns The Kitchen, home of Sac’s first Michelin Star — is negotiating with a farmer about produce.

A hundred feet or so away a buyer from the Paragary Group — the city’s largest restaurant owners — are buying meat. It feels a little like old-world shopping, where farmers took their goods to market, and chefs used those ingredients in the night’s creations.

Great food in Sacramento isn’t cheap, per se, but it is almost always accessible. Even on a rainy, late-fall night we are able to find a table at Mulvaney’s B&L near restaurant-happy midtown. The old brick building is alive with joyful noise, as the packed house dines on heirloom tomato salads with hand-pulled mozzarella, and house-made pappardelle with farm-fresh Bolognese. The menu isn’t reinventing anything, but it is using whatever chef Pat Mulvaney was able to scour from nearby farms. 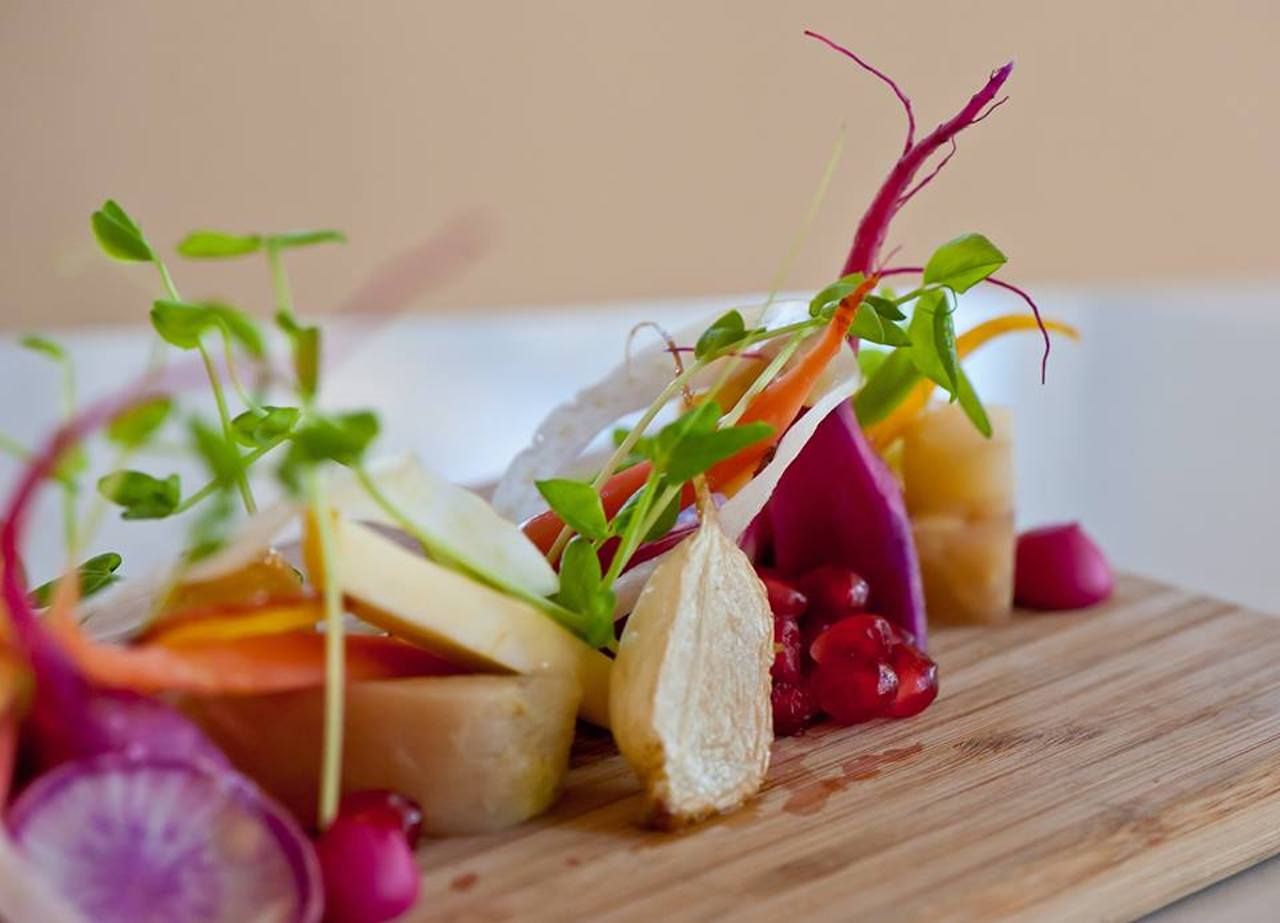 The rotating menu concept isn’t unique to Mulvaney’s. It’s more or less the norm in a city whose food scene is driven by the farms that surround it. Localis, also in midtown, is helmed by chef Chris Barnum-Dann and received a Michelin rating in 2019. His fall menu is full of apples, fennel, truffle, and quail.

Nearby, The Waterboy is offering honey nut squash ravioli with wild mushrooms, and a shellfish risotto with tomatoes and saffron. All or none of this may be on the menu next time you go to Sacramento, but that’s the fun of eating here: Even going to the same restaurants, you’ll never have the same experience twice.

The best in California wine tasting, 15 minutes from downtown 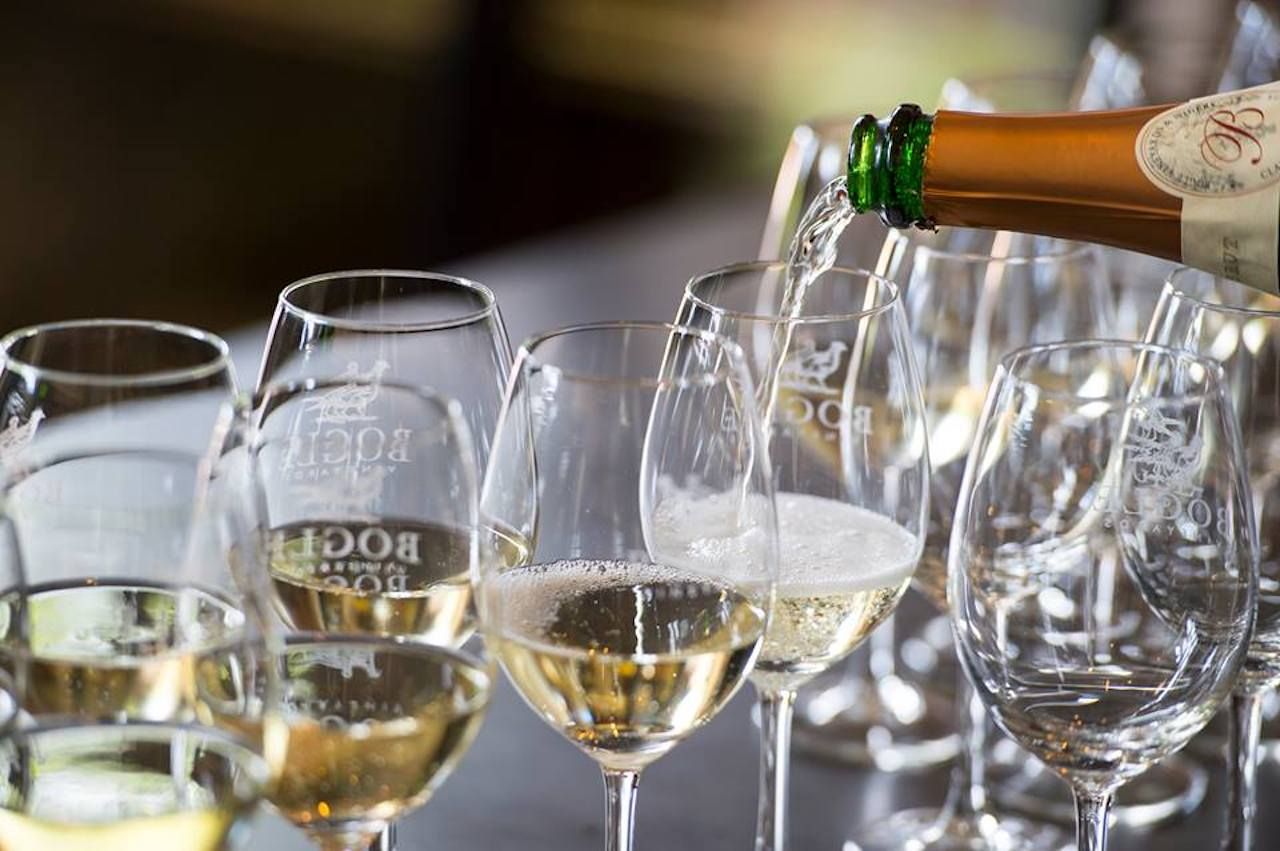 Wine, of course, is as much a part of a place’s culinary terroir as its produce — especially in California. And before delving into the foodie wonderland of the former City of Trees, you can spend a day tasting wine as you would in far-costlier Napa or Sonoma with much less driving involved.

About a 15-minute drive down I-5 past the infamous water tower, you’ll find Clarksburg, a little wine region next to the Sacramento River. The biggest player here is Bogle, best known for its Petite Syrah. On a sunny Sunday, parents sit under the property’s towering oak sipping Bogle’s 50th Anniversary vintage, letting their kids run among the vines. Upstairs, more discerning visitors enjoy the tasting room with a sprawling view of the land and the El Dorado foothills beyond.

Farther down the Sacramento River, you’ll find Grand Island Vineyards right at the junction with Steamboat Slough. Many vineyards here sit on islands carved out of the canals and sloughs built during the river’s shipping heyday, creating peaceful waterfront drives through wine country. Though the river isn’t always visible from Grand Island’s property, you won’t mind when trying the chenin blanc and cab franc, two other grapes this region does exceptionally well.

Just north of Clarksburg in the agricultural suburb of Elk Grove, you can go wine tasting at McConnell Estates. It cranks out a tannat as good as anything you’d get from Uruguay. Its wine is nearly impossible to find outside Northern California, so McConnell is worth a stop just to bring something back that nobody has back home.

Skiing, biking, and rafting to burn it all off 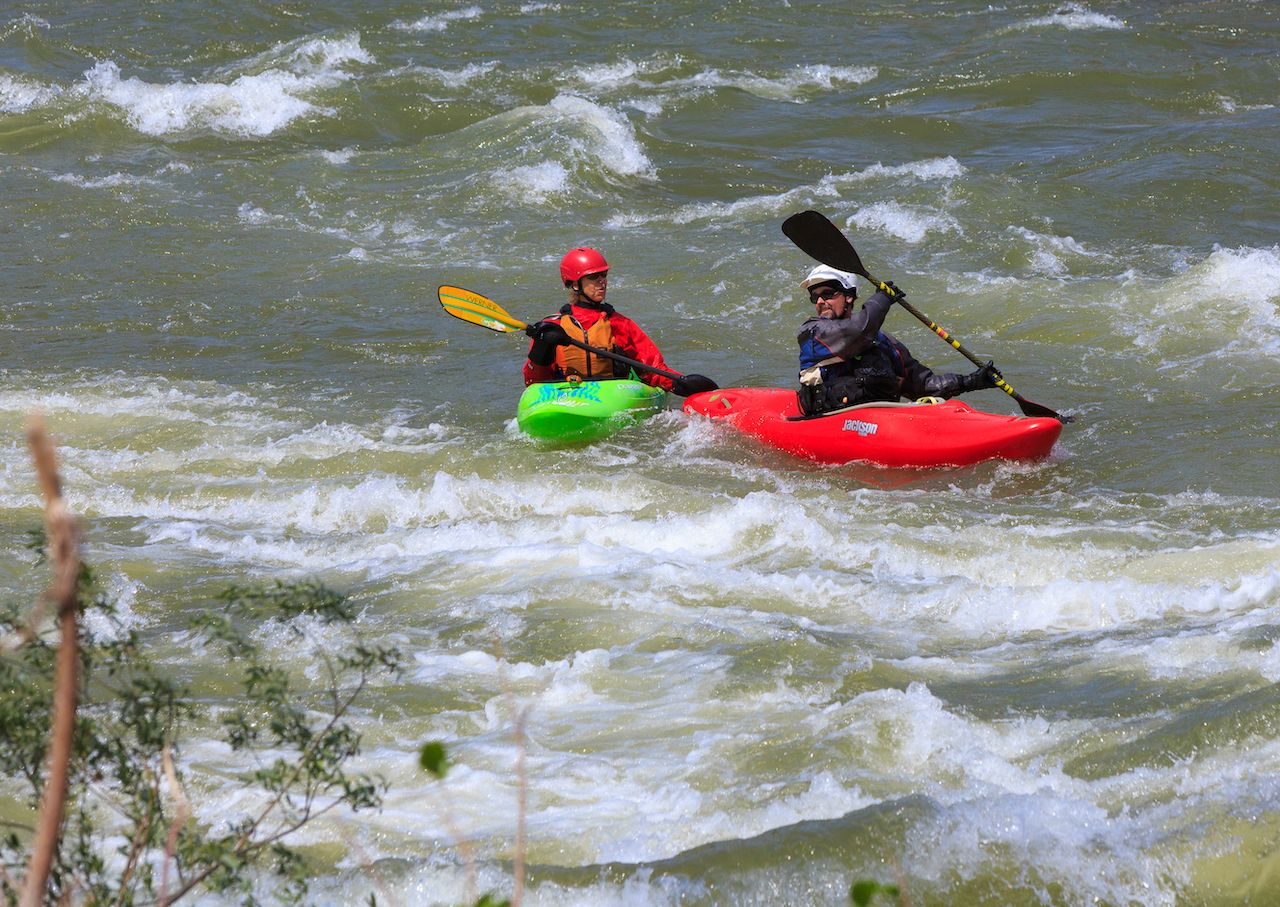 Of course, if you feel the need to exercise after all that excess, Sacramento is awash in outdoor recreation. That conversation always begins with the American River Bike Trail, a 32-mile path that runs next to the river with glimmering views of the water poking out between the trees. It’s an ideal place for a morning bike ride or afternoon run, and unless you’re here during the height of summer, you’ll almost always find ideal temperatures.

Should you visit in winter, you’re only a short trip up Highway 50 to the Sierra-at-Tahoe, the closest ski resort in South Lake Tahoe. Another half hour and you’ll be in Northstar or Squaw Valley, making for easy day trips with minimal traffic.

In summer, a brief 30-minute drive brings you to Coloma and whitewater rafting on the South Fork of the American River. Rapids along this fork don’t go much over Class III, so if you came to town to eat and want to give whitewater a try, it won’t be too harrowing.

None of this is to say Sacramento is an ideal replacement for a trip to Napa Valley or the Bay. It’s not nearly as large or scenic a city as San Francisco, and you won’t find the refined wine country charm of Napa. But if you weren’t hellbent on tasting Opus One or dinner at Quince, Sacramento will bring you the same quality of flavors and variety with far less cost and crowds. And though it may have irked some longtime locals, it seems Sacramento in the 21st century has become far more than the City of Trees.

WineThe Classic Wineries That Put Napa on the Map Are Still Must-Visits
Tagged
Food + Drink Trip Planning Wine
What did you think of this story?
Meh
Good
Awesome

12 Facts About Sacramento That Will Surprise You

Notes From an Ex-Alcoholic Skateboarder