The Samuels family of Kentucky, creators of Maker’s Mark bourbon, has spent decades crafting a spirit that’s meant to be sipped straight. But in their latest venture — renting out The Samuels House, their 200-year-old family home to Bourbon Trail visitors and whiskey aficionados — they’ve mixed up the perfect cocktail of history and modern luxury.

For between $850 and $1,250 a night, guests get to stay in the house, located in Samuels, Kentucky, where the idea for Maker’s Mark first came to fruition. This is no typical hotel experience: you and your travel partner(s) will have the house completely to yourself. And within those 3,000 square feet, there are so many layers of whiskey history to explore.

If you’re a bourbon nerd, the Samuels House will be an intriguing experience. The walls are bursting with history: photos and memorabilia tracking the evolution of one of the most widely known bourbon brands in the world, and thousands of dollars’ worth of old whisky bottles. 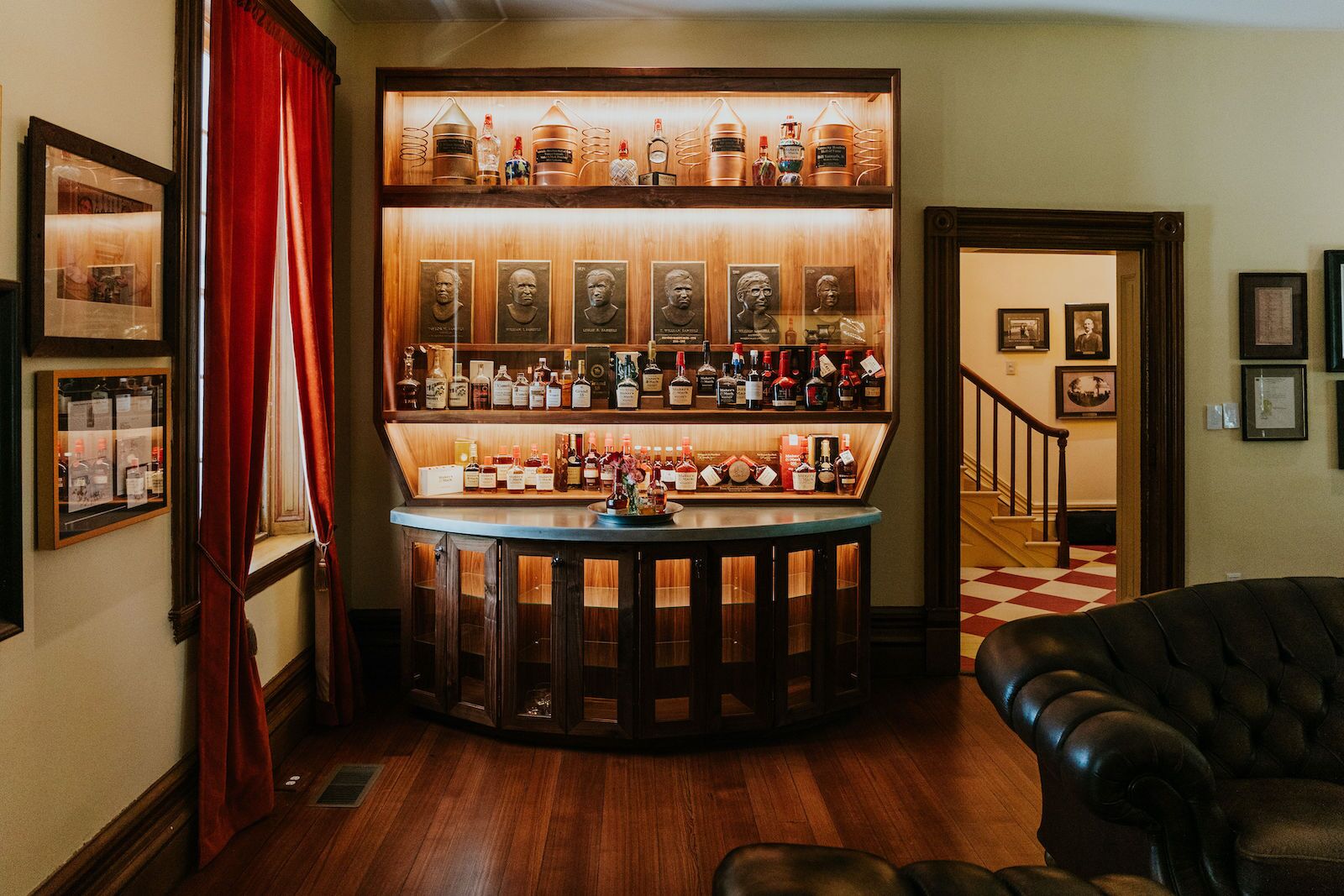 The parlor downstairs — where guests are welcome to settle in for a glass of bourbon — includes plush brown leather couches and a vibe straight out of a Prohibition-era speakeasy. Two glass cases boast dozens of whiskey bottles: one exclusively for historical and special-edition Maker’s Mark bottles, and another filled with old, mini shooter bottles. In that section, plenty of non-Maker’s Mark brands make an appearance, and it’s fun to examine how the bottles have evolved over the decades.

Even if you’re not much of a bourbon drinker, the layers of history in this house will likely interest American history buffs, too. A Civil War-era gun, for example, which the Samuels family says was surrendered to the Union army in the front yard of the house in the 1860s, hangs in a case by the front door.

The Samuels family also had ties to the notorious outlaw, Jesse James. As the story goes, two of the Samuels women married Bud and Donnie Pence, who (allegedly) helped Jesse and his gang carry out bank robberies across the South. In the upper level of the Samuels House, they cut out an escape hatch, in case the authorities arrived unexpectedly and they had to crawl out and shimmy down a tree.

That flirtation with illegality makes more appearances throughout the house. The downstairs bedroom is dedicated to Dixie Sherman Demuth, the last member of the Samuels family to be born in the house. Demuth helped get a 1700s Kentucky law declared overturned in 1972—officially allowing women to serve liquor at bars. 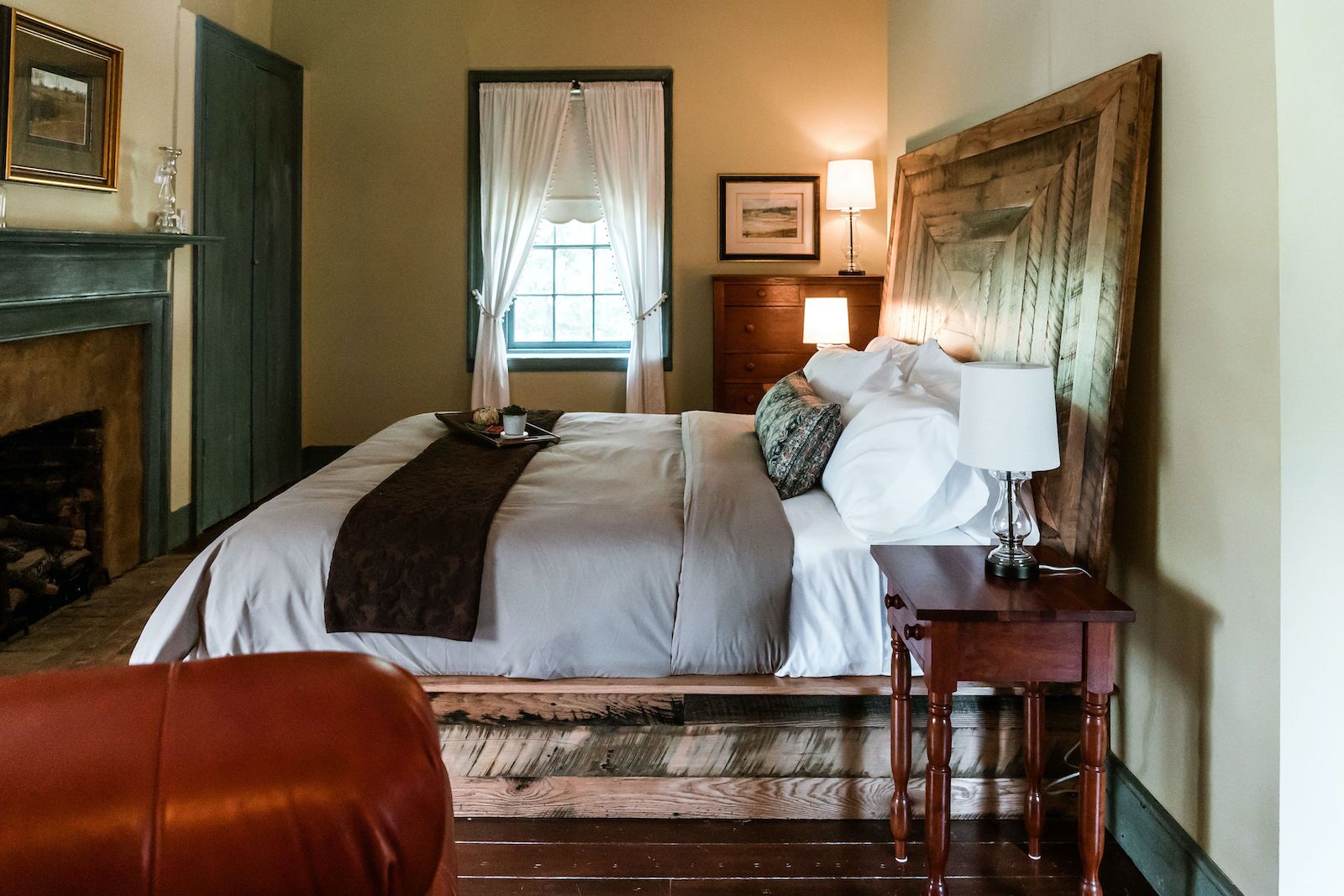 You might think a house of this age (built around 1820) would be creaky and lacking modern updates. But the Samuels family seamlessly combines historical authenticity with luxuries of today’s time.

There are three bedrooms (two king-sized beds and one queen). If you’re traveling with a group, there’s plenty of privacy among the three: separate staircases lead to the two upstairs bedrooms, and the downstairs one is tucked at the edge of the house.

The upstairs bathrooms come equipped with beautiful rain showers, with the one off the biggest bedroom including an enormous standalone bathtub, where you can sip bourbon, neat, from a bubble bath.

The kitchen features the original fireplace where pre-electricity cooking took place. These days, it’s complemented by updated appliances, sleek glassware, and, of course, your own bottle of Maker’s Mark. Even better, that kitchen comes stocked when you arrive — local eggs, sausage, beer, and, my favorite, fudge made by Trappist monks in nearby New Haven. 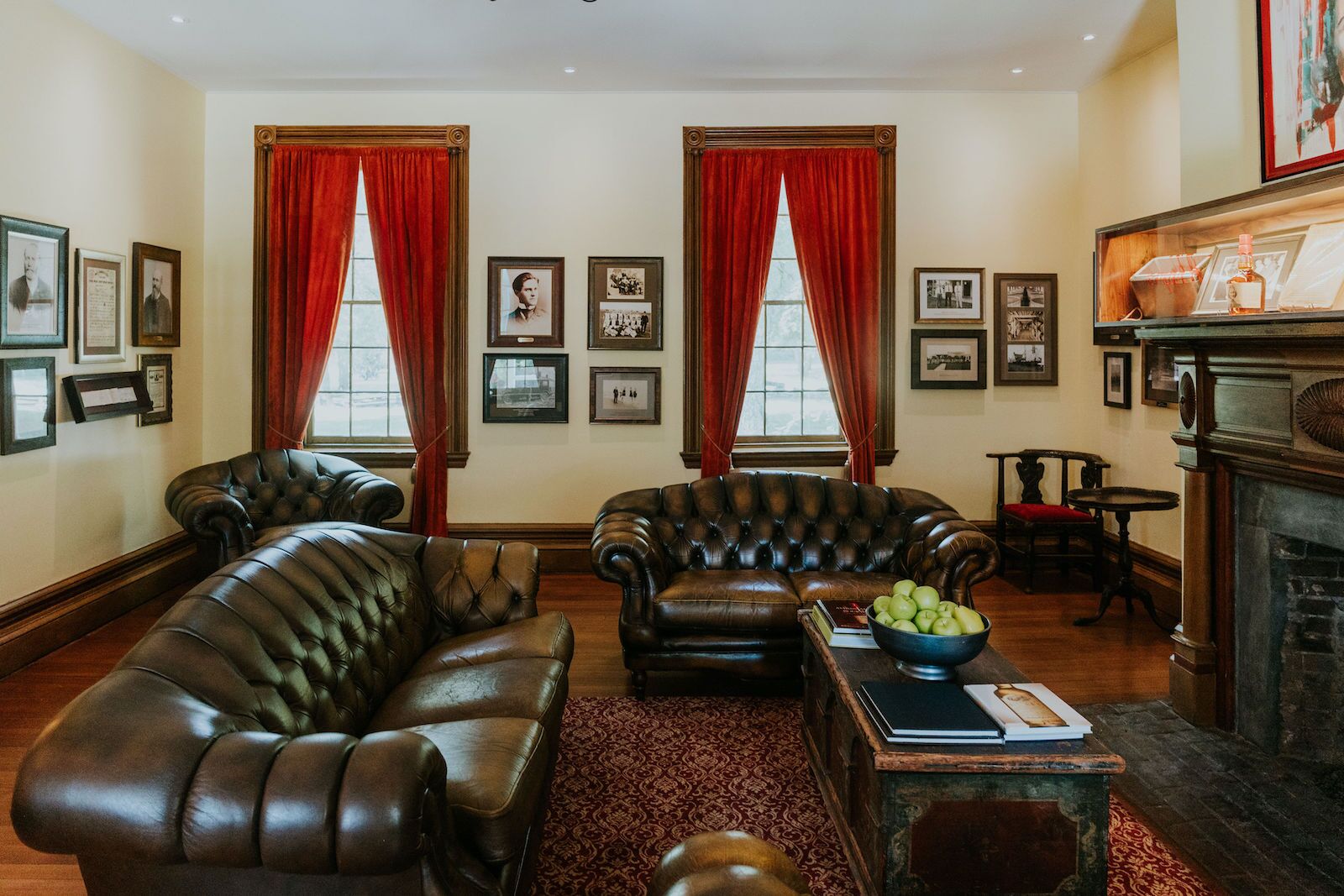 A house this massive and old might feel a little eerie for a solo traveler — but it’s a dream for couples or groups (up to 8). Nowhere is that more obvious than the outdoor gathering areas.

When the weather’s nice, take your meals out to the big kitchen table on the back covered porch for fresh-air dining. The rest of the massive backyard is highlighted by a sprawling stone patio, plush outdoor sectional, and fire pit—perfect for curling up with an evening Old Fashioned and watching the yard sparkle with fireflies.

What guests can do at Samuels House 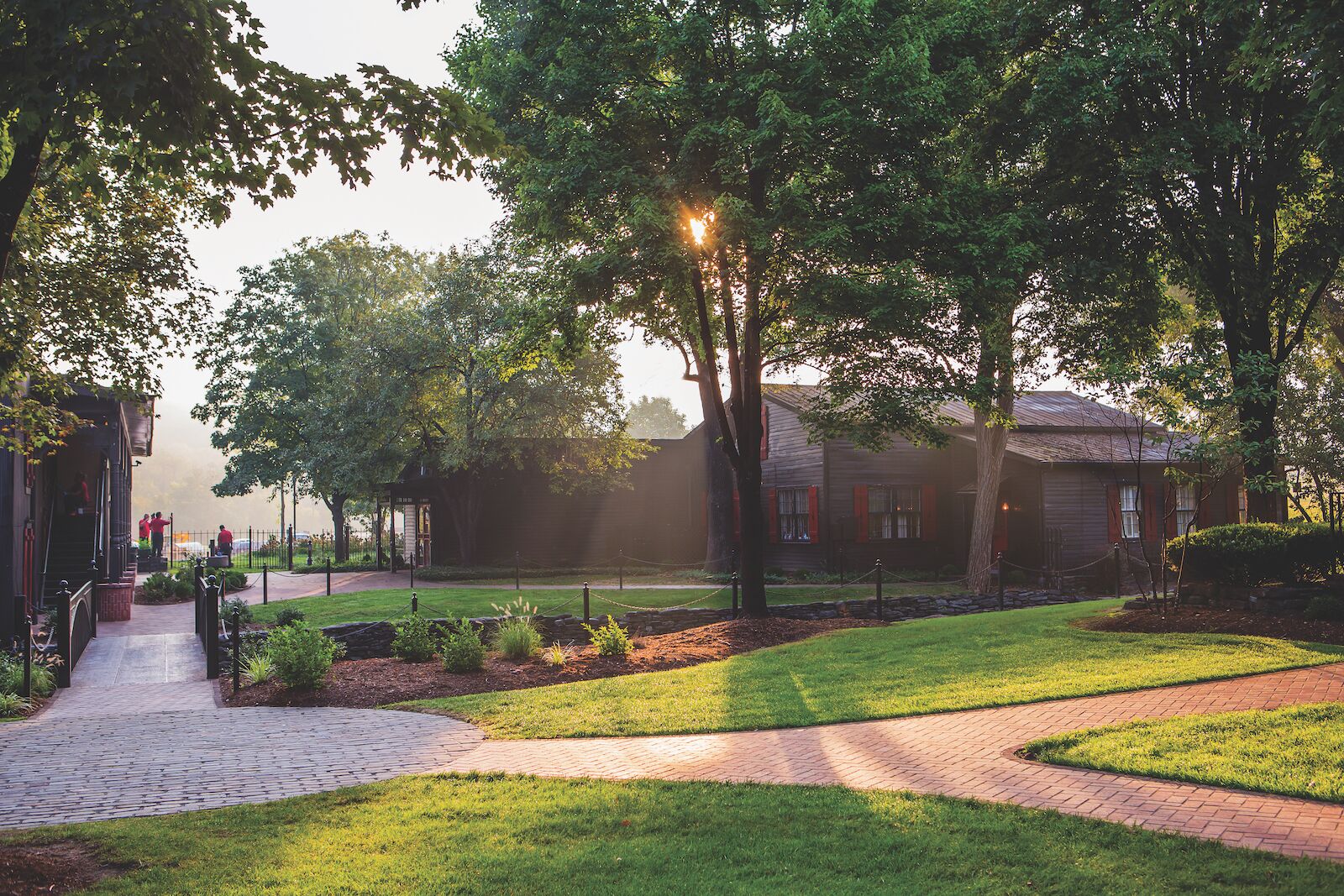 Book a VIP Maker’s Mark distillery tour: As a native Kentuckian, I’m practically contractually obligated to check out as many distilleries as possible. Maker’s Mark is widely considered one of the best distillery experiences in the state. It’s easy to see how it’s earned that reputation.

Overnight guests have the chance to book either a daytime ($1,850) or nighttime ($2,500) private distillery tour, with special bonuses like a cocktail-making workshop and a progressive tasting throughout the grounds (the whole compound is roughly 1,000 acres).

Even if you stick with the regular tour available to the general public, walking through the Maker’s Mark grounds is a full sensory experience; the smell of the warehouses filled with thousands of aging bourbon barrels is especially intoxicating.

Visitors will also be met by the cool air of the cave-like whiskey cellar, where Maker’s 46 and Private Select are aged in a temperature-controlled environment, the sounds of glass clanking from the assembly-line bottling facility, and the sparkle of Chiluly blown-glass artwork in the hallway on the way to the gift shop — where you can hand-dip your own bottle and feel the heat from Maker’s Mark signature red wax.

Even your sense of taste gets a few fun bonuses here. One hallmark of Maker’s Mark is that you can feel its warmth slowly descend all the way down your chest after taking a sip: a smoother, longer-lasting feeling than many other bourbons. This cozy sensation is what they call the “Kentucky hug” — and you’ll get a few of them in the tasting room after your tour. If you’ve paid for the private VIP tour, you’ll get those Kentucky hugs paired with food, crafted by local chef Newman Miller.

Have a drink with Bill Samuels, Jr.: For $750, Samuels House guests can book a “Sipping & Storytelling” experience with Bill Jr., the Chairman Emeritus of Maker’s Mark. As you chat, you’ll pour a glass of Maker’s 46, the unique selection that Bill spent years creating.

What else to do in Samuels, Kentucky

If you reach your limit on Maker’s Mark tastings during your stay, you’re in the perfect area to extend your Bourbon Trail experience. Jim Beam and Heaven Hill’s distilleries, for example, are both within 15 minutes of the house, and many others are within an hour’s drive.

For dining options, you can cook your own meals in the expansive, fully-equipped Samuels House kitchen. You can head back up the road half an hour to Louisville, an underrated culinary hotspot. Or, Bardstown is only about 10 minutes away. The town has been named the Most Beautiful Small Town in America, and it’s filled with great restaurants — including the Harrison-Smith House. The tiny city is chock-full of things to do, including a Women’s Civil War Museum, haunted tours (lots of ghosts frequent this region), and, of course, more bourbon-themed activities.

How to get to Samuels House 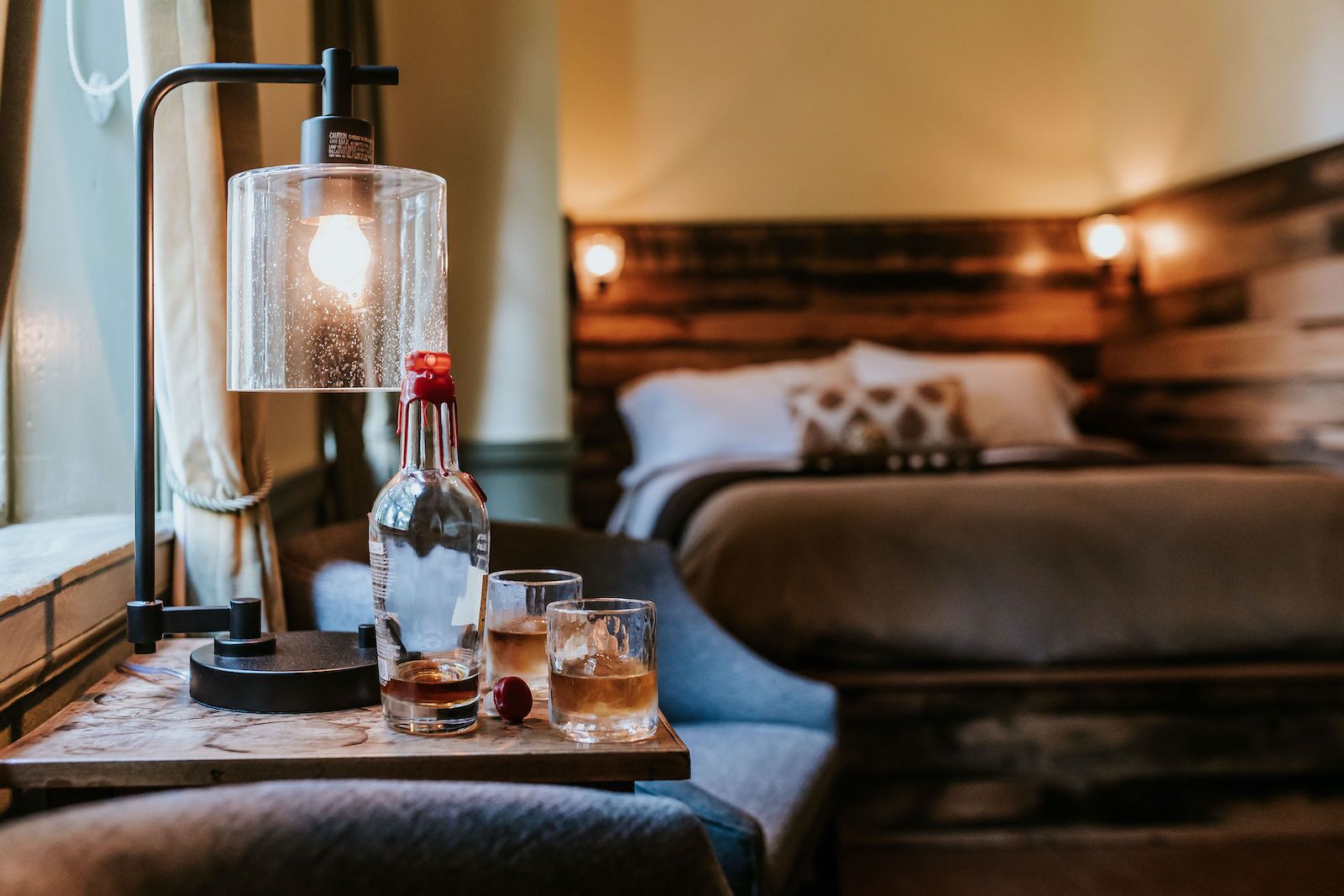 Muhammad Ali Airport in Louisville is the closest airport, about a 30-minute drive away. The Bluegrass Airport in Lexington is also an hour away.

Be sure to rent a car, as public transportation isn’t an option in the rural neighborhood of the Samuels House. The drive from either of the airports is beautiful, and you’ll get the quintessential rolling-hills-of-Kentucky view out your window on the way in.

From the house, it’s also about a 40-minute drive to the Maker’s Mark distillery. So keep in mind it’s a good idea for someone in your group to take it easy in the tasting room.

Note that the Maker’s Mark distillery has its annual shutdown scheduled from Aug. 15 – Sept. 15.