There’s a saying in wine country: “it takes a lot of beer to make a great wine.”

Though Santa Barbara may be known the world over as one of California’s best wine regions, most visitors don’t know that the region holds another great secret: fabulous breweries. And as for the wine country saying? Well, workers at the local wineries drink beer to stay refreshed during the warm California summer. (And water, of course.)

The tour of Santa Barbara breweries below makes the perfect plan for one day of fabulous beer tasting — especially if you take note of the recommended brew you need to try at each location.

If you walk between all eight of the Santa Barbara breweries below without making any stops, you could do it in about 36 minutes and would cover roughly 1.8 miles. However, making stops is the whole point of doing this tour, so plan on a whole day if you’re visiting every brewery.

You could also break it up if you don’t think you’re up for eight breweries in one day. Walking between the first three (Night Lizard, Institution, and Third Window) will take about 10 minutes and cover half a mile, while visiting the last five (Topa Topa, Validation, Brass Bear, Figueroa, and the Brewhouse) will take about 15 minutes and cover just under a mile. The numbering below assumes you’ll start at Night Lizard and finish at The Brewhouse. 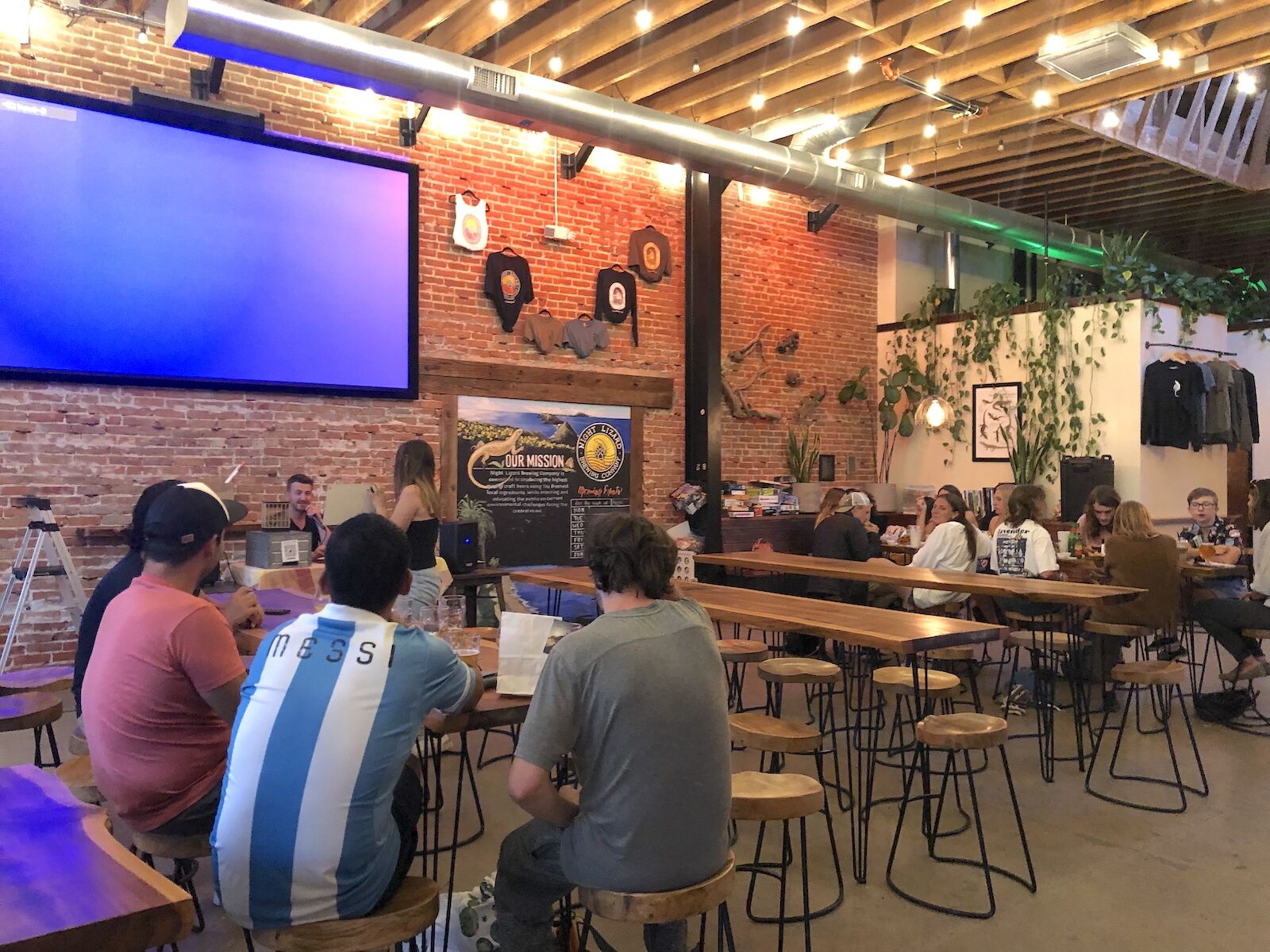 This eco-friendly, family-operated brewery uses its eclectic beers to bring attention to conservation efforts. Each beer bottle features a picture of a different endangered species from the central California coast, such as the song sparrow, tiger salamander, and eponymous night lizard. The Nasser family focuses on creating quality beers with local ingredients and is constantly experimenting with new flavors to introduce new brews into their rotation. And thanks to rotating partnerships with local restaurants, they have some of the most varied food among Santa Barbara breweries, too.

On State Street, Santa Barbara’s main thoroughfare, Institution Ale Co. is a local, well, an institution. The friendly atmosphere, exquisite craft beers, and highly regarded pizza menu attract locals and visitors alike. Visitors can post up at the bar to try multiple beers or grab a pint and head to the area of old-school arcade games in the back. Heads-up if you come on NFL or MLB game days: this place gets quite busy with California sports team fans. 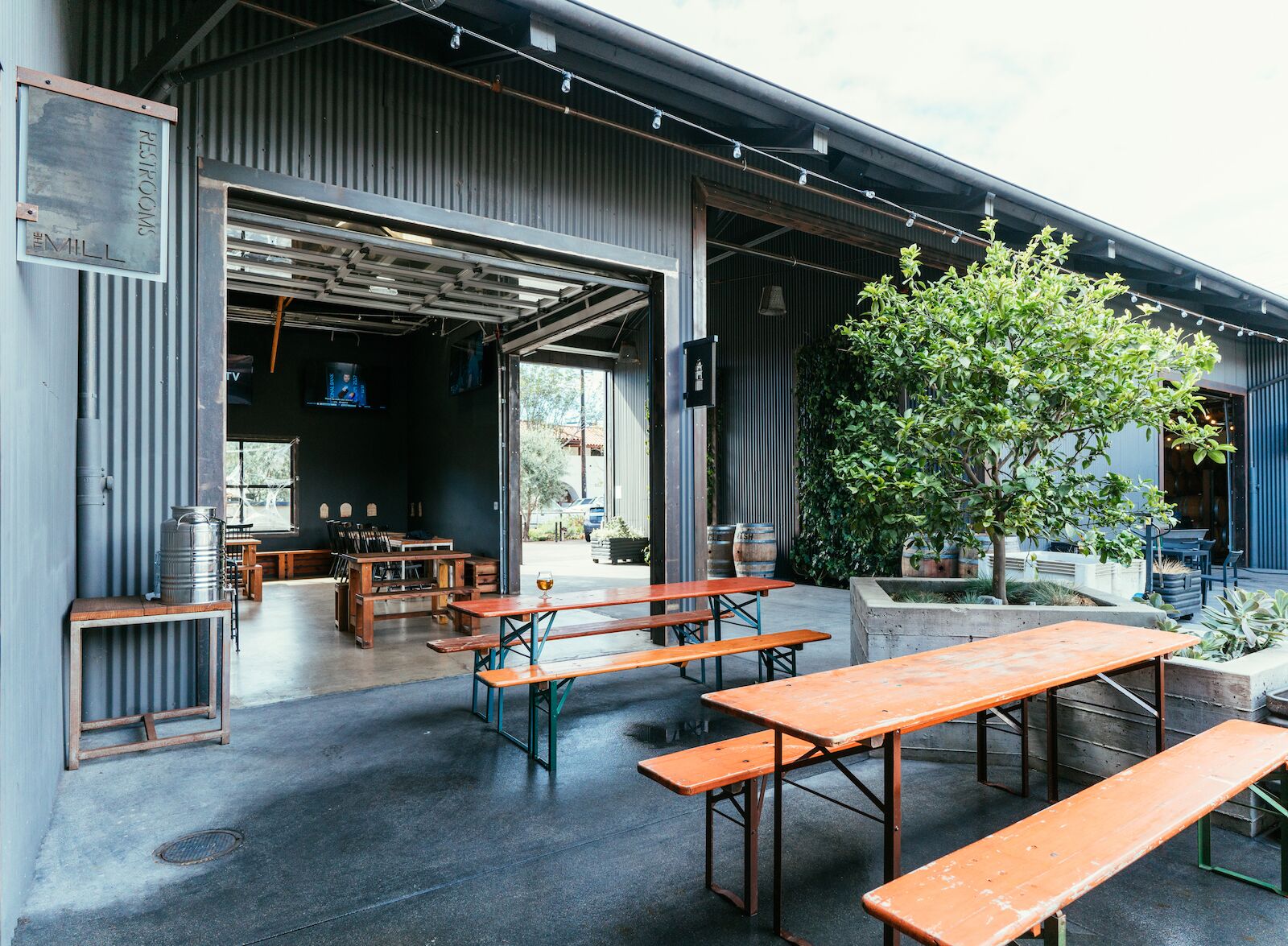 This award-winning company was founded by Kris Parker, whose parents run Fess Parker Winery and whose grandfather was famed Hollywood actor Fess Parker himself. At Third Window Brewing, beers are inspired mostly by Belgian traditions, but infused with local ingredients ranging from citrus products to cocoa nibs derived from Twenty-Four Blackbirds Chocolates, which makes some of the best chocolate in Santa Barbara. The taproom is in a restored barn, and the outdoor, pet-friendly patio is one of the best hangout spots in town. 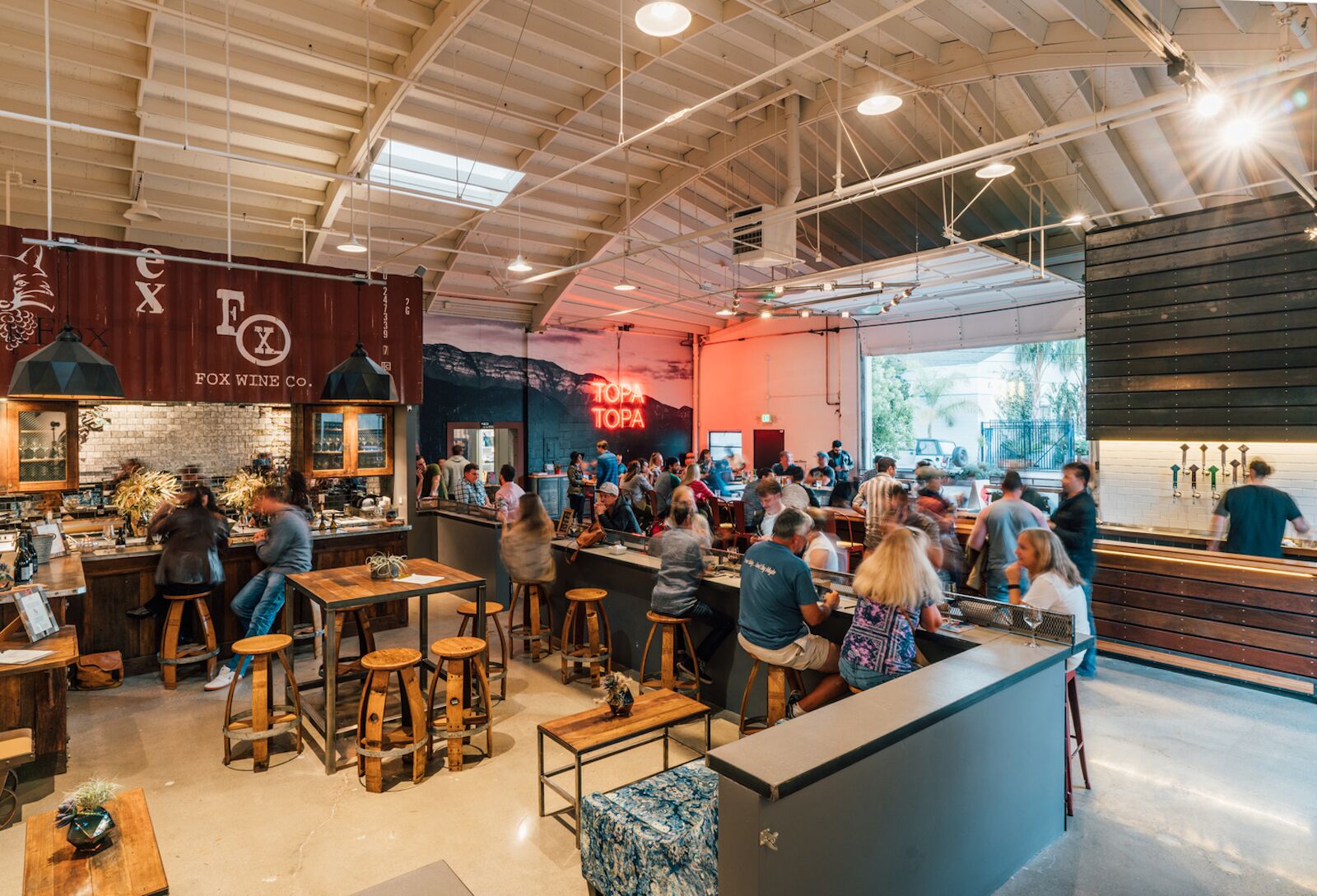 Beer aficionados looking for unusual, innovative flavors will find their happy place at Topa Topa. Its location in Santa Barbara is in the lively and vibrant Funk Zone, the lively and modern part of town filled with galleries, cool bars and restaurants, and wine-tasting rooms. In fact, Topa Topa shares a space with Fox Wine next door, allowing guests to sample the best Santa Barbara breweries and wines in one stop. 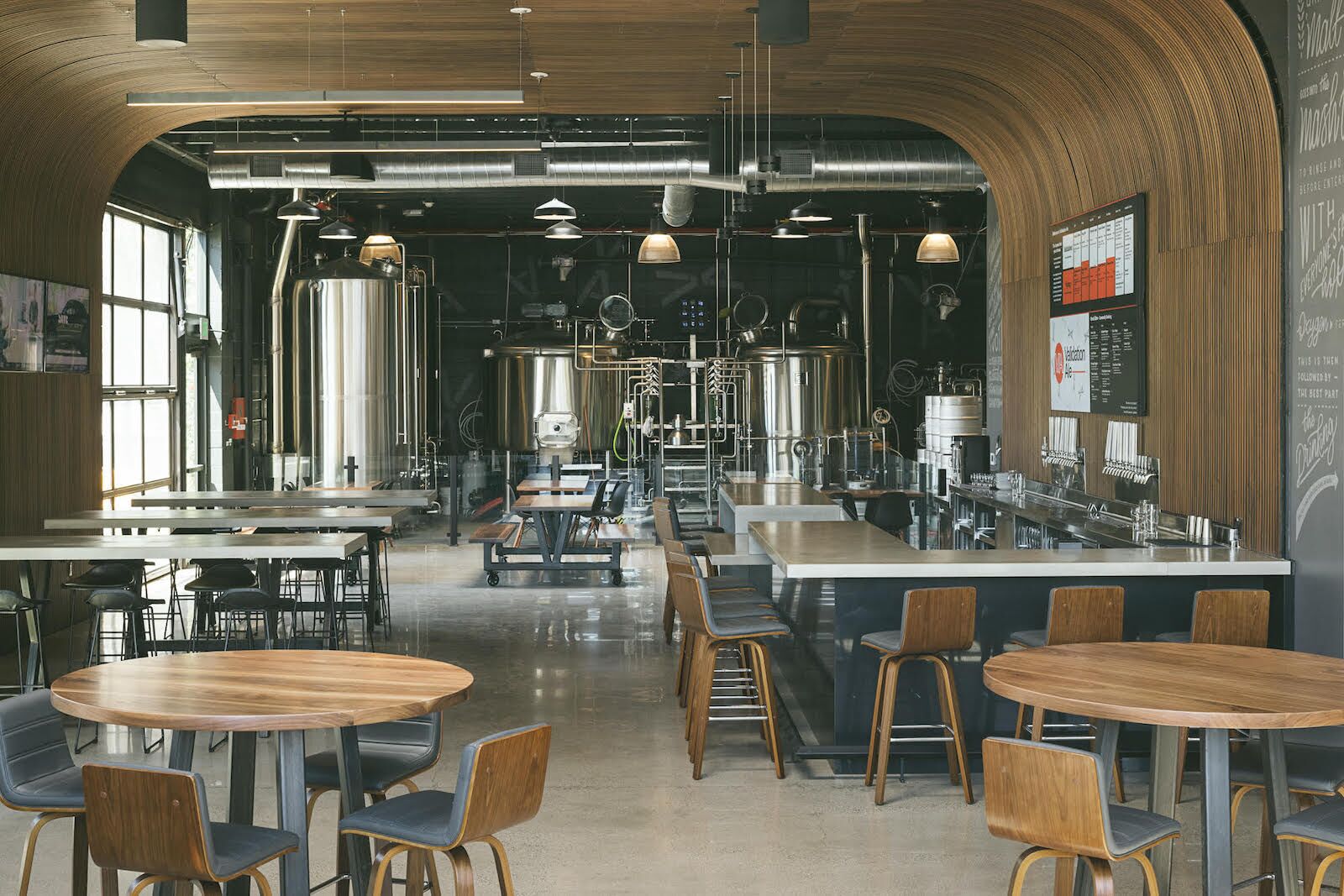 Opened in 2022, this brand new Santa Barbara brewery invites its guests to become part of their process in a very special way; visitors can submit their own recipes, which get brewed and voted on to see which will become “validated” (i.e., part of the bar’s official menu).

Validation Ale is a great hang-out spot for sports fans who also want to enjoy the latest and greatest in craft beers, as the brewery frequently shows live games on multiple TVs that attract plenty of fans. 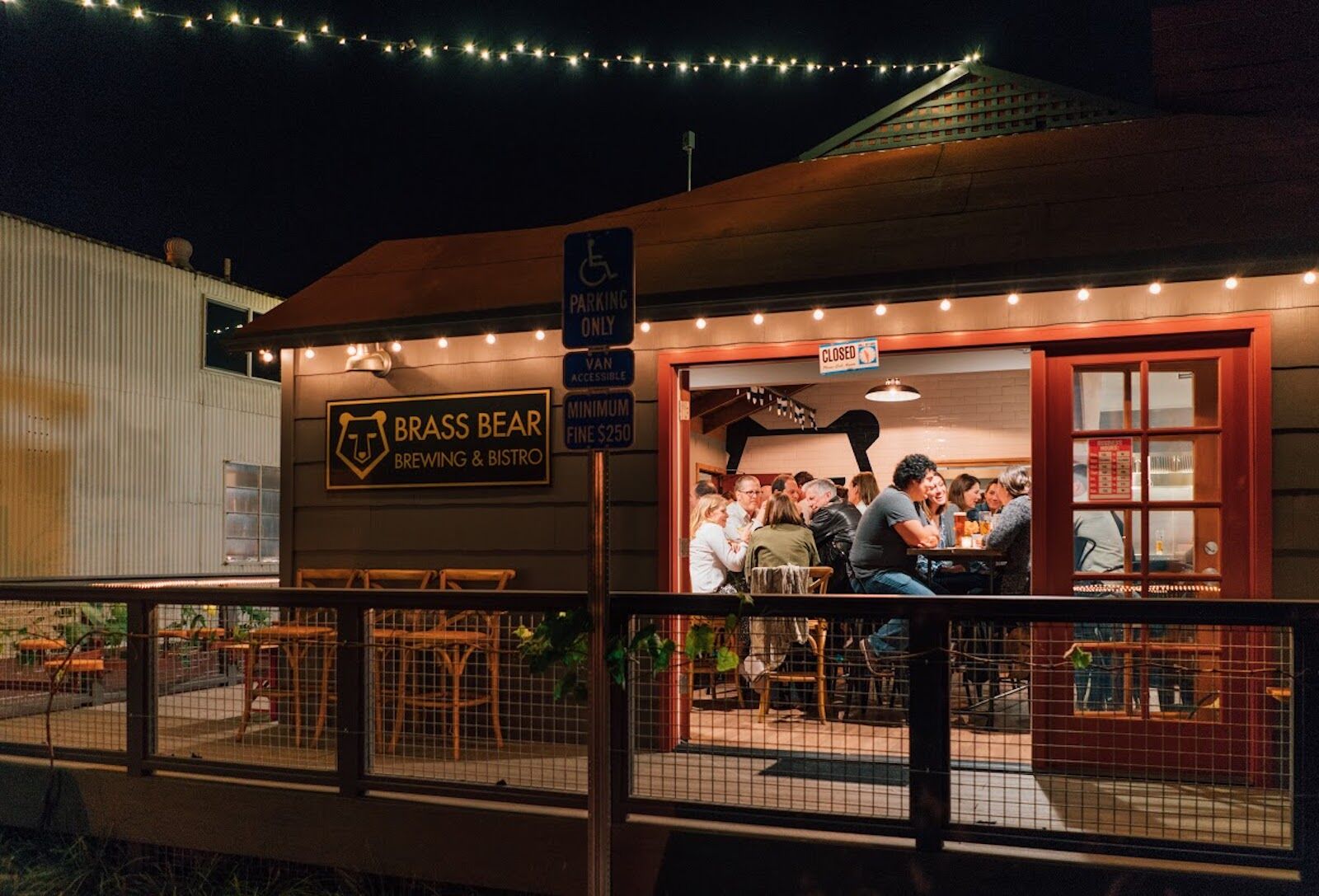 The husband-and-wife team behind Brass Bear wants its customers to know that Santa Barbara’s breweries can be fun spots for the whole family, at least at times. On Wednesday evenings and Sundays, Brass Bear spot offers a supervised area for kids with toys and activities to ensure children have a great time while their parents try some of the best beers in town.

Also in the town’s Funk Zone, Brass Bear offers a wide range of menu items made from locally sourced ingredients on its large patio and backyard area. Drinkers who like lighter beers will appreciate the options usually on tap, including a sour, a blonde, and at least one or two lagers. It’s not all about IPAs here. 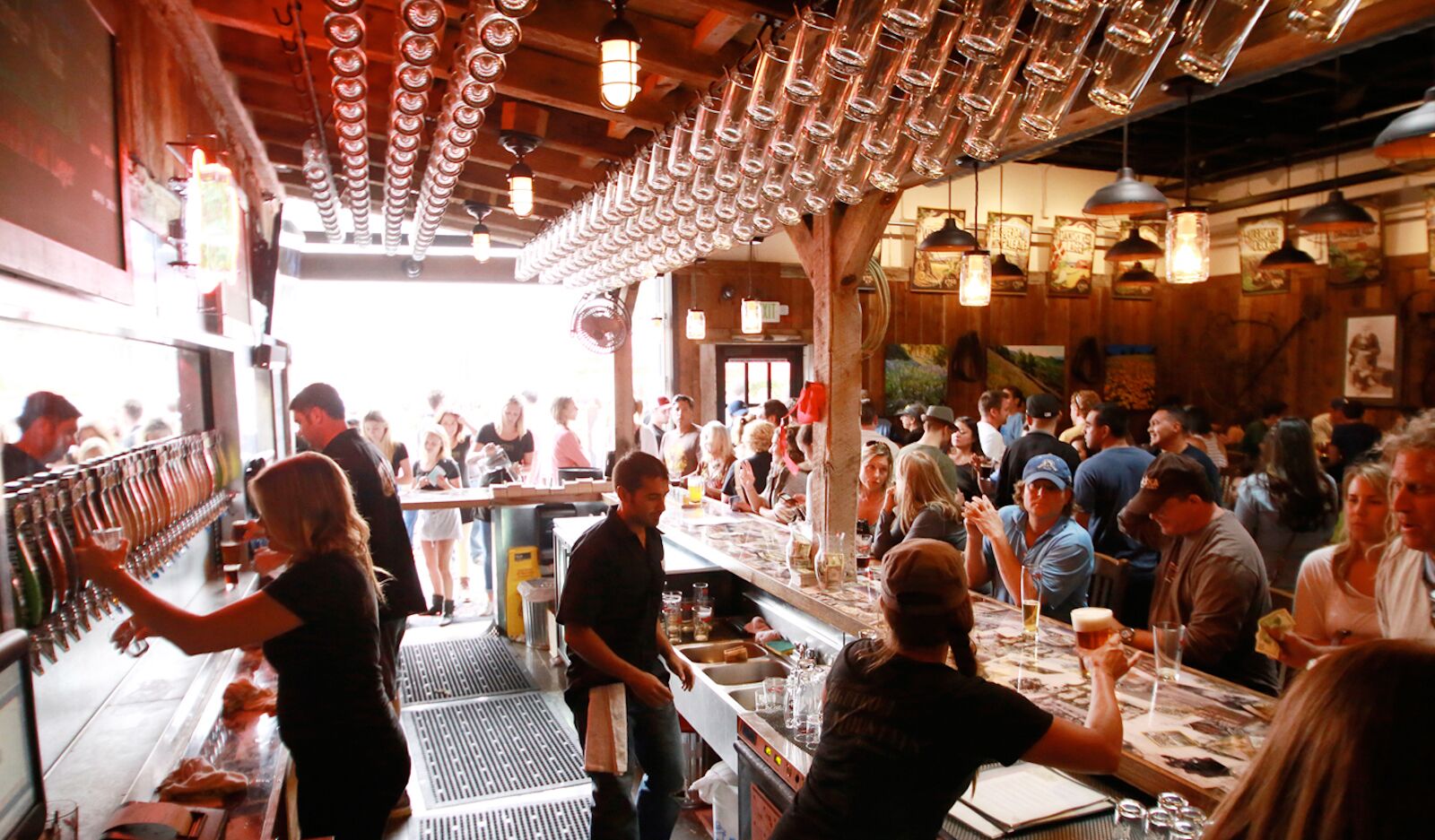 Figueroa Mountain Brewing, often just called Fig Mountain, is the place to be for a fun night out in a lively atmosphere. With local bands performing live several nights a week, plus events like game nights and trivia nights, Figueroa guarantees a good time for friends and large groups.

A father-and-son team runs the brewery, which was awarded the “Best American Pale Ale” prize at the 2022 World Beer Cup – an event that does exist and, yes, is as fantastic as it sounds.

This classic American bistro and brewery is a local favorite in Santa Barbara, partly thanks to its extreme dog-friendliness – it even has a separate menu for dogs. The owners, Pete and Casey, take pride in crafting The Brewhouse’s beers on site, using two big copper vessels to complete the process. Check out the extensive list of stouts, pale ales, IPAs, and pilsners, though any of the other 20-plus beers are equally good choices.

The Brewhouse is also one of the few Santa Barbara breweries with a full-service restaurant, offering a variety of appetizers and main dishes covering meat, seafood, and pasta dishes, as well as sandwiches and burgers. 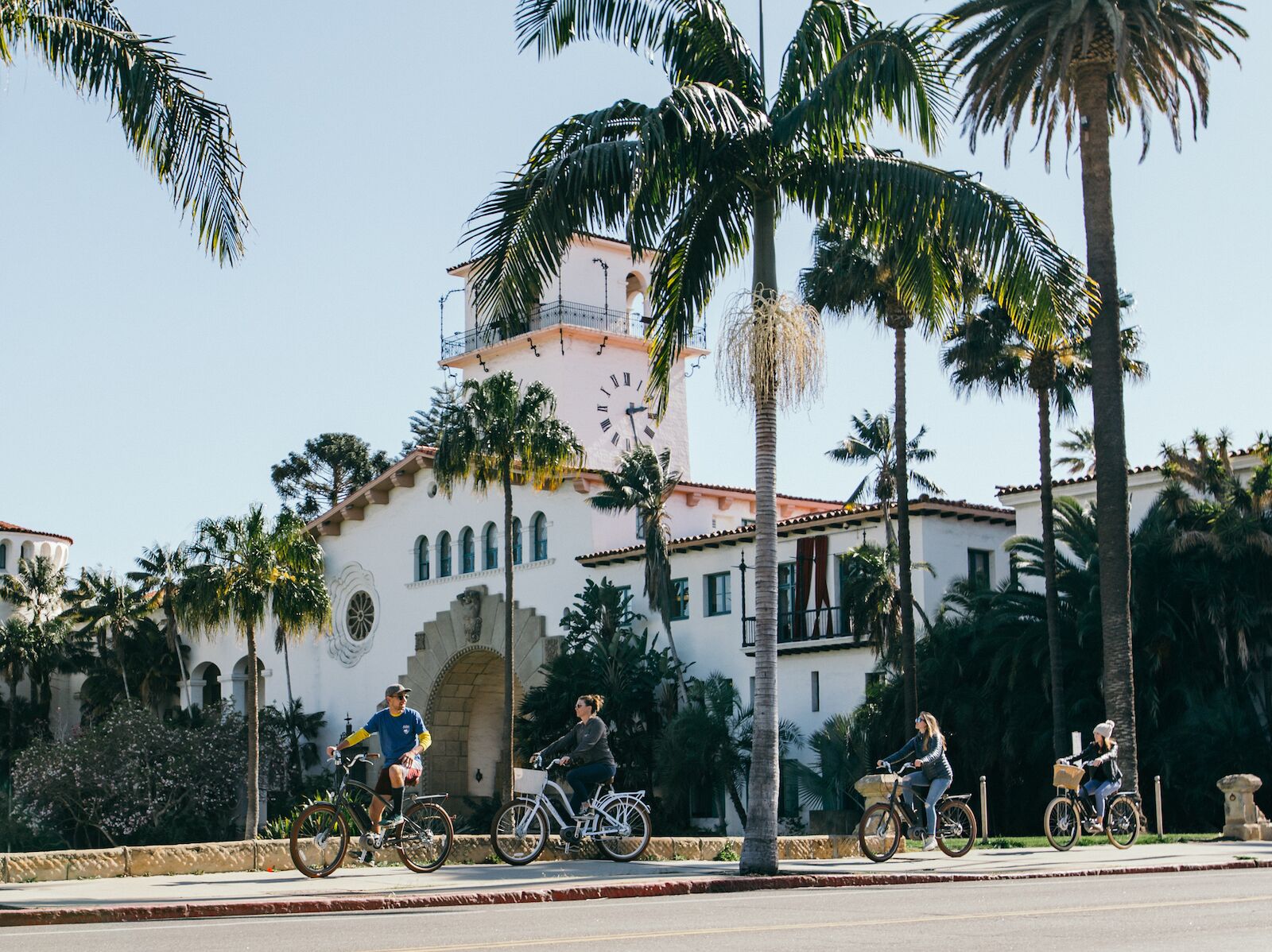 Many of the best Santa Barbara breweries are in central areas of Santa Barbara, around State Street or the Funk Zone. Walking between them is easily doable and recommended as, obviously, you’ll want to avoid driving around town (unless you have a designated driver).

However, for those who want to explore more of the city and check out different breweries in the process, Cal Coast Adventures offers a Bike and Beverage Tour. Guests can bike around town and explore different corners of the city while sampling some of the best wine and beer Santa Barbara has to offer.

Guests who want to try some of the best Santa Barbara breweries and learn a bit about the town’s history in the process should consider the Santa Barbara Craft Brewery & History Crawl from Totally Cali Tours.

Taxis and rideshares are also readily available in town, so don’t stress if you did drive and it turns out the beers you tasted were a little stronger than expected. Just leave your car parked, take a Lyft back to your hotel, and swing back for your car in the morning. You can use it as an excuse to try some of Santa Barbara’s best breakfast restaurants and coffee shops while you’re at it.

NewsThe Most, and Least, Expensive States for a Pint of Guinness
Tagged
Beer Food + Drink
What did you think of this story?
Meh
Good
Awesome

10 of the Most Stylish Boutique Hotels in Santa Barbara

How To Have the Perfect Outdoor Weekend in Santa Barbara