Rows of thin, lizard-looking fish tied to bamboo poles and fluttering in the wind can be seen on walks along Carter Road in Mumbai. In a city famous for all sorts of seafood, these strong-smelling fish in particular are especially beloved, and they go by the name Bombay duck.

Mumbai (once Bombay) was a favored port for colonists because of its position on India’s western coast. Over the years, the city transformed into a financial hub attracting people from across the country, who migrated in search of better fortunes. Today, the city is India’s financial capital and home to a diverse range of communities and cultures.

For generations, Mumbai’s native residents enjoyed fishing as one of their primary occupations, and seafood has long been an integral aspect of the city’s food culture. This love for fish is clear in the crowd that throngs the docks and fishing jetties each morning, in the many seafood-specific restaurants that dot the city, and on the plates of the many communities that call the city its home. Fresh and dried fish finds its way into curries; is coated in batter and shallow fried; and gets roasted, pickled, or steamed in leaves. 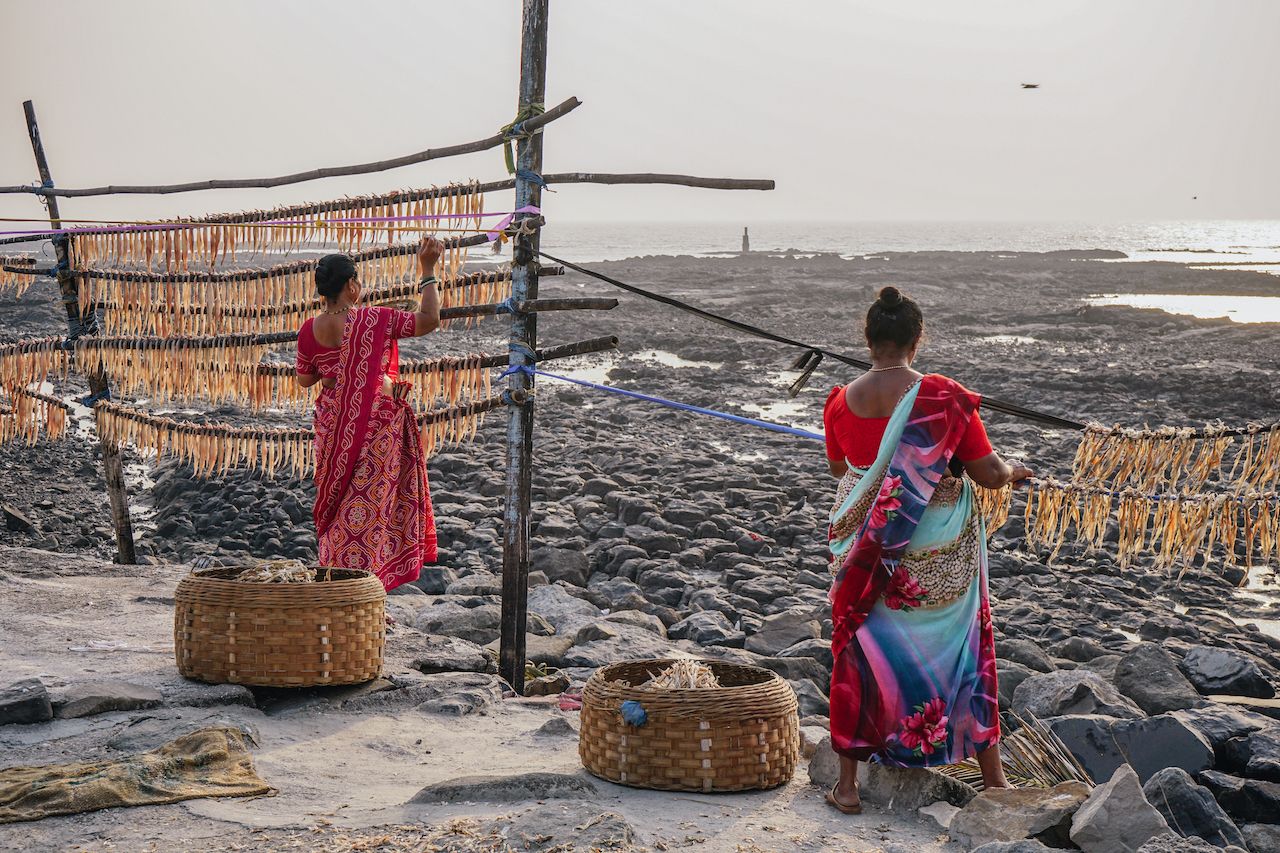 Each community in Mumbai has special dishes that center food from the sea. These dishes are both featured on restaurant menus and are prepared by home cooks. Wherever you have a chance to try them, these are the seafood dishes that you shouldn’t miss in Mumbai. 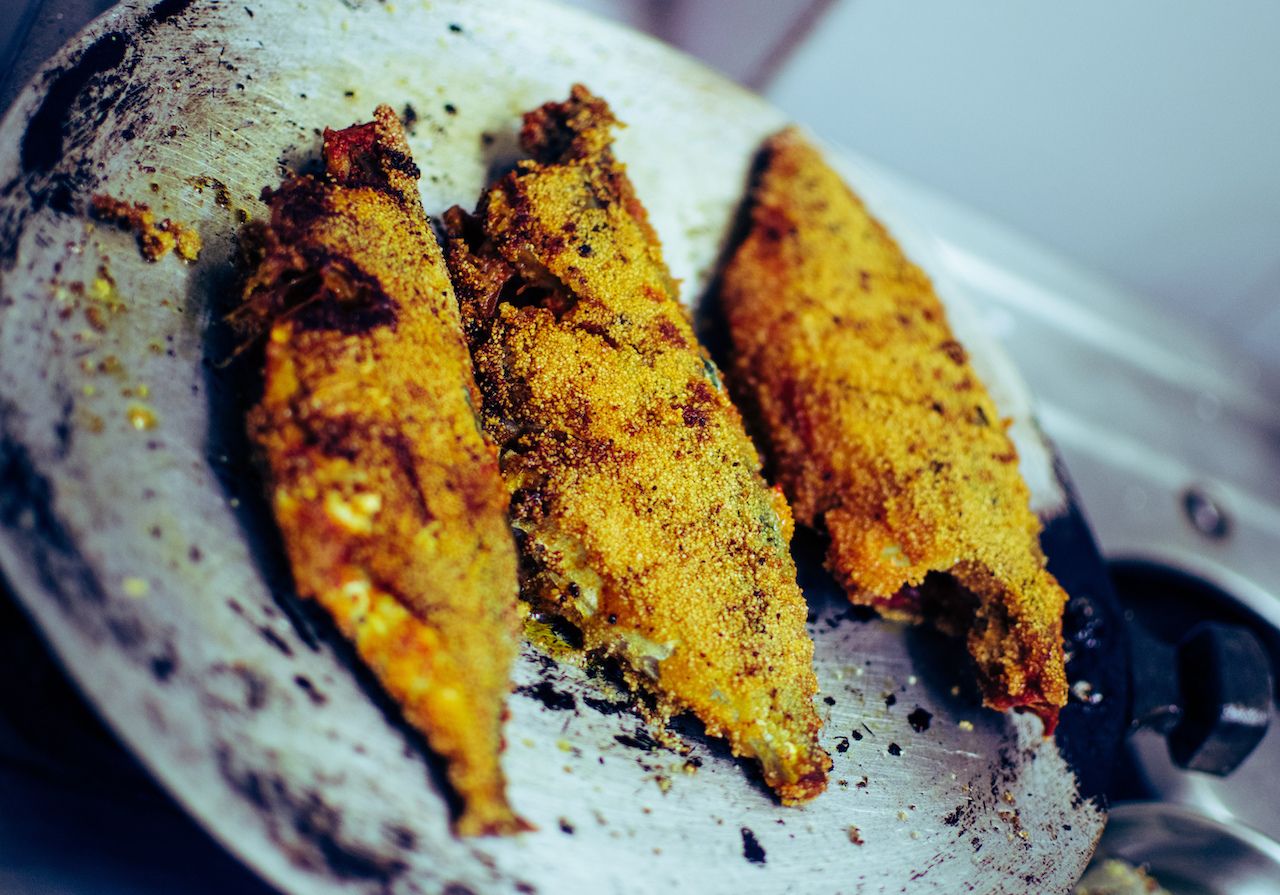 Bombil is prepared in a variety of ways and savored across communities in Mumbai, and it’s most popular form is the bombil fry. The fish, separated from its central bone and drained of excess water (usually by keeping it under weights), gets mixed with salt, haldi (turmeric powder), chili powder, and other herbs, roots, and spices. Once the marinade sets in, the fish gets a coating of rava (semolina) or rice flour and is shallow-fried. The final fish has a crispy coating with a soft interior. Top with a squeeze of lime, and it’s ready to eat.

The Parsis are an ethno-religious group that trace their origins to the Zoroastrians who fled Persia (now Iran) after the fall of the Sasanian Empire. A central part of the city’s history, this community’s food is a blend of many influences, including British, Persian, and Portuguese.

Patra ni macchi (literally fish wrapped in leaf) is a Parsi fish delicacy prepared on special occasions, like weddings. It features a whole flat fish (usually pomfret), coated in a spicy and tangy green chutney made from coconut, green chilis, coriander, and vinegar. The marinated fish is wrapped in banana leaves, tied with a string, and steamed. The final dish is a flaky soft fish with just a hint of spice.

The East Indian community is thought to be one of the oldest in Mumbai, Salsette Island, and Thanei. Once nicknamed Portuguese Christians, the culture dates back to the 16th century when the Portuguese converted locals to Roman Catholicism. One of the classic dishes in East Indian cuisine is a curry called fish chinchoni, which is commonly made with bombil. In this dish, chinch refers to tamarind, which gives a distinct tartness. Red chilis play an important role in the curry — they are soaked and then ground into a paste with pepper, garlic, and coconut; some cooks add raw rice for thickness. This curry is eaten with rice or apas (hand breads).

This beloved clam dish is common to many coastal communities in Mumbai. Goans, Malvani, Mangalorean, and Konkanis are among the many groups who prepare this dish at home. Tisrya (sometimes spelled tisreo) are clams, and sukha (or sukke) means dry, a reference to the absence of a gravy. People believe that cooking the clam in its shell enhances its flavor. The masala here is heavy on coconut, ground spices, and dried kokum (fruit from a tree related to mangosteens).

Restaurants across Mumbai serve various versions of the dish. Some are fiery, others are lower in heat and rich in other spices. It’s a dish that necessitates eating with your hands to suck the soft flesh out of the shell and enjoy the heat from the coconut masala. 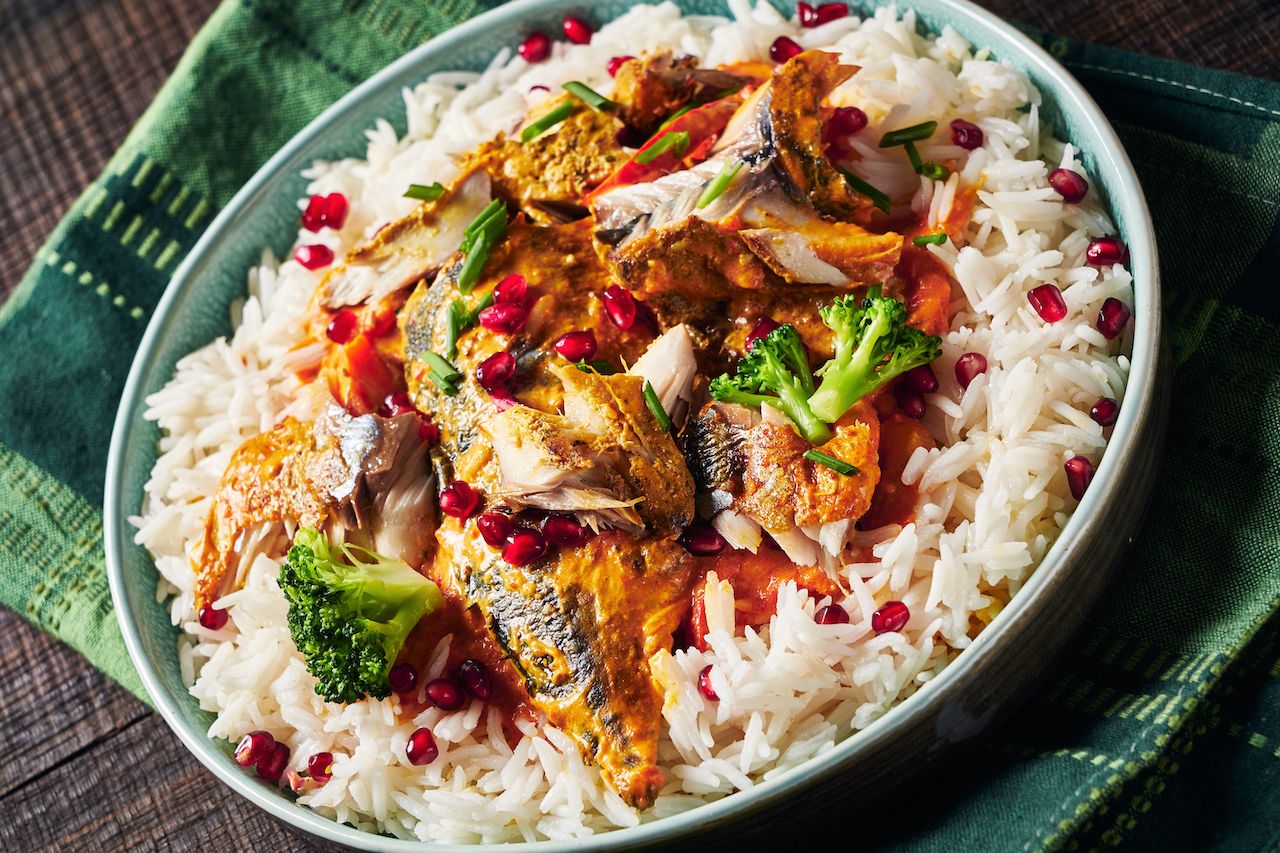 Bangda uddamethi, also known as bangda udid, is a typical dish cooked by Goan Hindus. Goa is a tiny state to the south of Maharashtra — many of whose citizens call Mumbai their home. Being a coastal state, the love for seafood permeates Goan cuisine.

This dish is made with bangda (mackerel) that is cooked with udid dal (split black lentils) and methi (fenugreek seeds). The main elements of other Goan curries are included as well: fresh grated coconut, red chilis, and black peppercorns, along with tamarind for a dose of acidity. This fish curry tastes best with steamed Goan rice.

One of the oldest settlers of Mumbai, Pathare Prabhus are a small community that migrated to India around 1300. Seafood is essential to Pathare Prabhu meals, and they use every part of the fish in their cooking.

Ghol bhujne is a popular fish stew that focuses on the kaata (central spine) of the ghol (black spotted croaker) fish. It’s a simple stew made using pieces of fish, cut without removing the spine. The spine has marrow in it, which adds a gelatinous texture to the curry. A stand out aspect of this dish is the masala mixture of onions, garlic, green chilis, and haldi (turmeric). These are crushed and mixed by hand until it forms a paste. 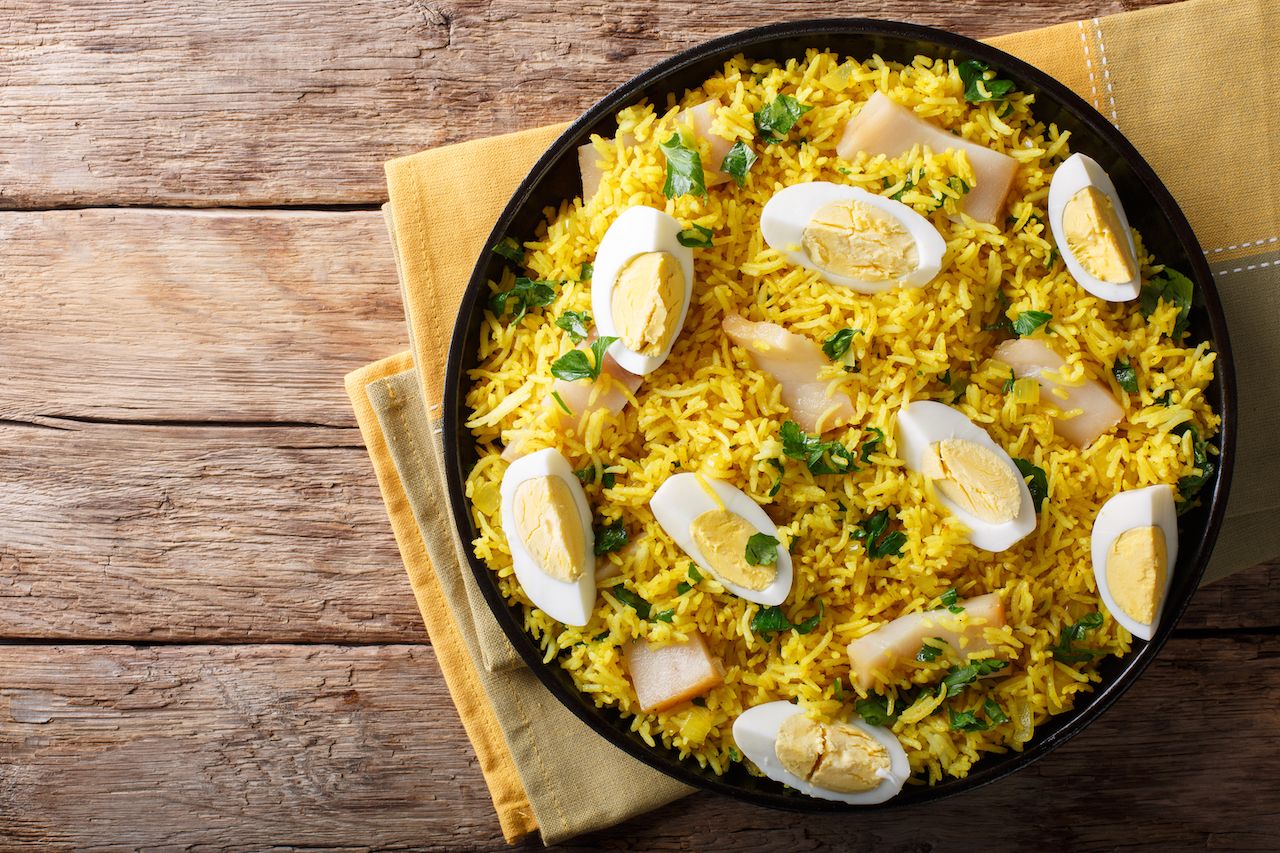 A popular Anglo-Indian dish is kedgeree, which is a rice dish made with smoked fish and boiled eggs. A popular British breakfast dish, kedgeree is a version of the vegetarian Indian dish khichdi (meaning mishmash). The Anglo-Indians added their own spin to khichdi with a focus on fish. Kedgeree keeps the essential flavors of khichdi, but isn’t vegetarian as it’s made with smoked flaked fish, onions, spices, butter, and a topping of sultanas (raisins).

The Koli community also count themselves among Mumbai’s original inhabitants. This fishing community loves their seafood, and bombil is a popular and widely eaten catch that’s used in a variety of dishes.

One specialty using this fish is bambuke bombil. Here, fresh bombil is tied to bamboo poles and allowed to dry in the soft afternoon sun. This ensures the fish remains soft inside but gets a crisp covering. The fish becomes so delicate that it isn’t stirred when cooking — instead, the handi (vessel in which the dish is cooked) is gently tilted to allow the ingredients to coat it. The fish is typically cooked into a dry gravy with onion, coconut, green chilis, garlic, and Koli masala (a spice mix made with pepper, cloves, cinnamon, coriander, chilis, and other ingredients).

National ParksThe Best Rivers in America for Tubing and Drinking
Tagged
Food + Drink Mumbai, India
What did you think of this story?
Meh
Good
Awesome