As a nation of seafarers, the Portuguese have always had a strong bond with the ocean. This, of course, deeply influences the country’s cuisine. Today, eating seafood in Portugal is a summer ritual, and the best way to experience it is by the coast with a group of friends and a glass of white wine (and you truly do not want to skip out on the best Portuguese wine). When you get the chance to try Portuguese seafood, start with these seven traditional dishes. 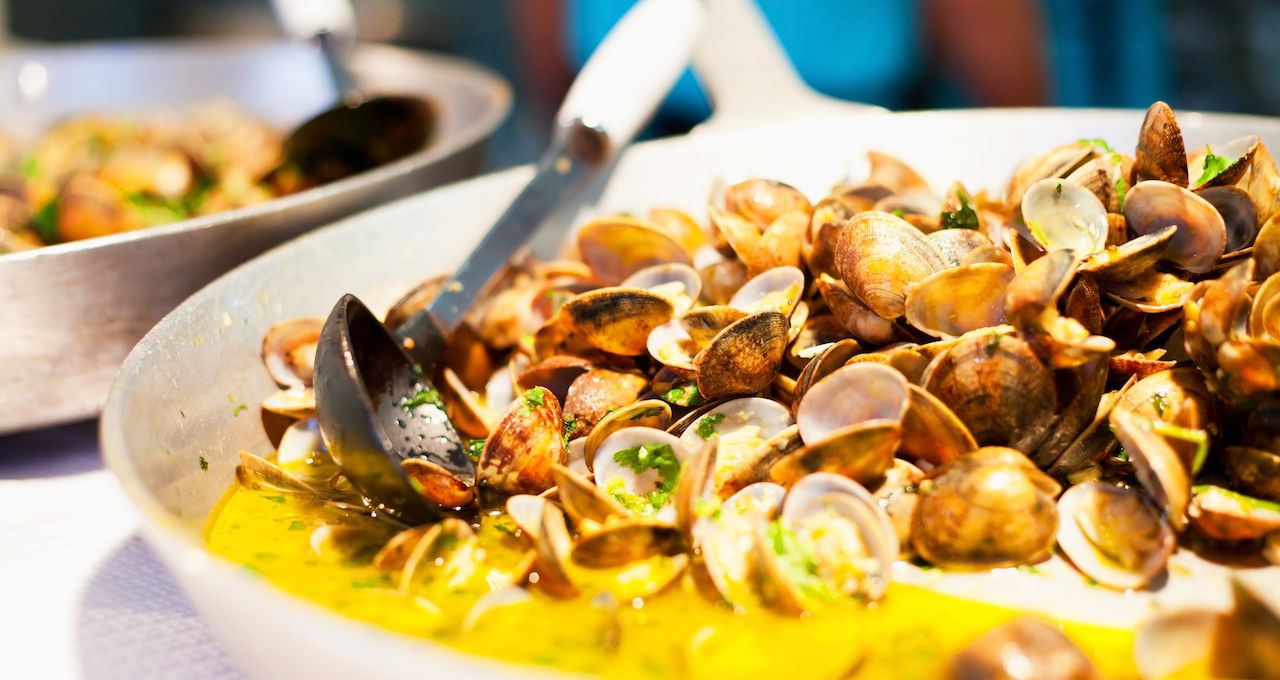 Every seafood restaurant in Portugal is bound to have ameijôas à Bulhão Pato, which is simply clams in a white wine sauce. Portuguese have been eating clams for hundreds of years, but it was in the 19th century that the Bulhão Pato sauce, named after the famous Portuguese poet of the same name, was born. All you need for this dish is a bit of garlic, olive oil, white wine, and coriander. Some also like to drizzle a bit of lemon juice over the top. Whatever you do, don’t leave that delicious sauce on the plate instead, grab of a bit of bread to soak it up! In Lisbon, splurge and give them a try at Cervejaria Ramiro. 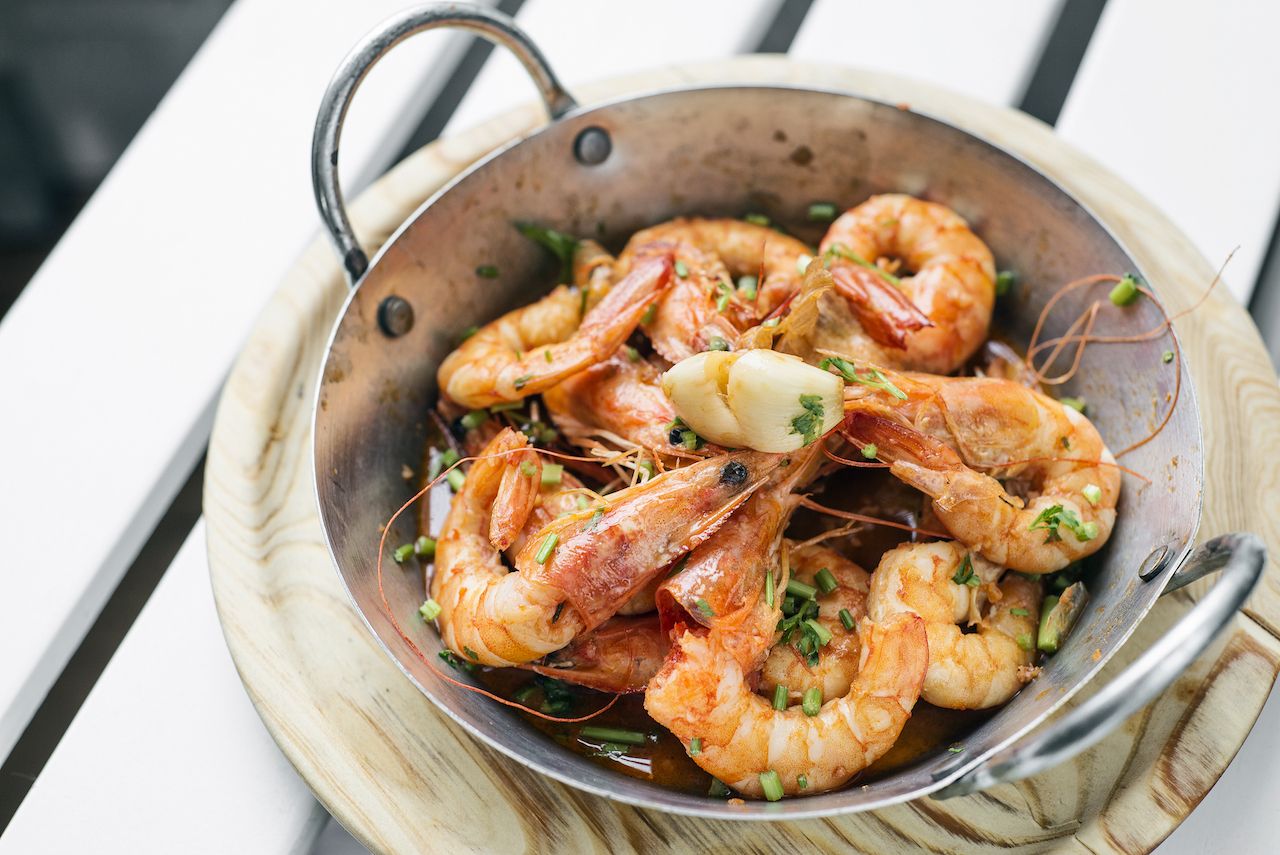 There are endless ways of cooking gambas ao alho, but you can never leave out the garlic. The dish translates to “garlic prawns,” and most Portuguese restaurants will have it on the menu as a starter. Depending on the restaurant, you can also swap shrimp for prawns. Whatever you pick, you’ll likely get the heads and shell with it, so you’ll need to use your hands to peel it off. Some locals like to rip the heads off and suck out the inside, but no one will judge you if you don’t. In Lisbon, you can find the best prawns at Cervejaria Ramiro and Cervejaria Pinóquio. 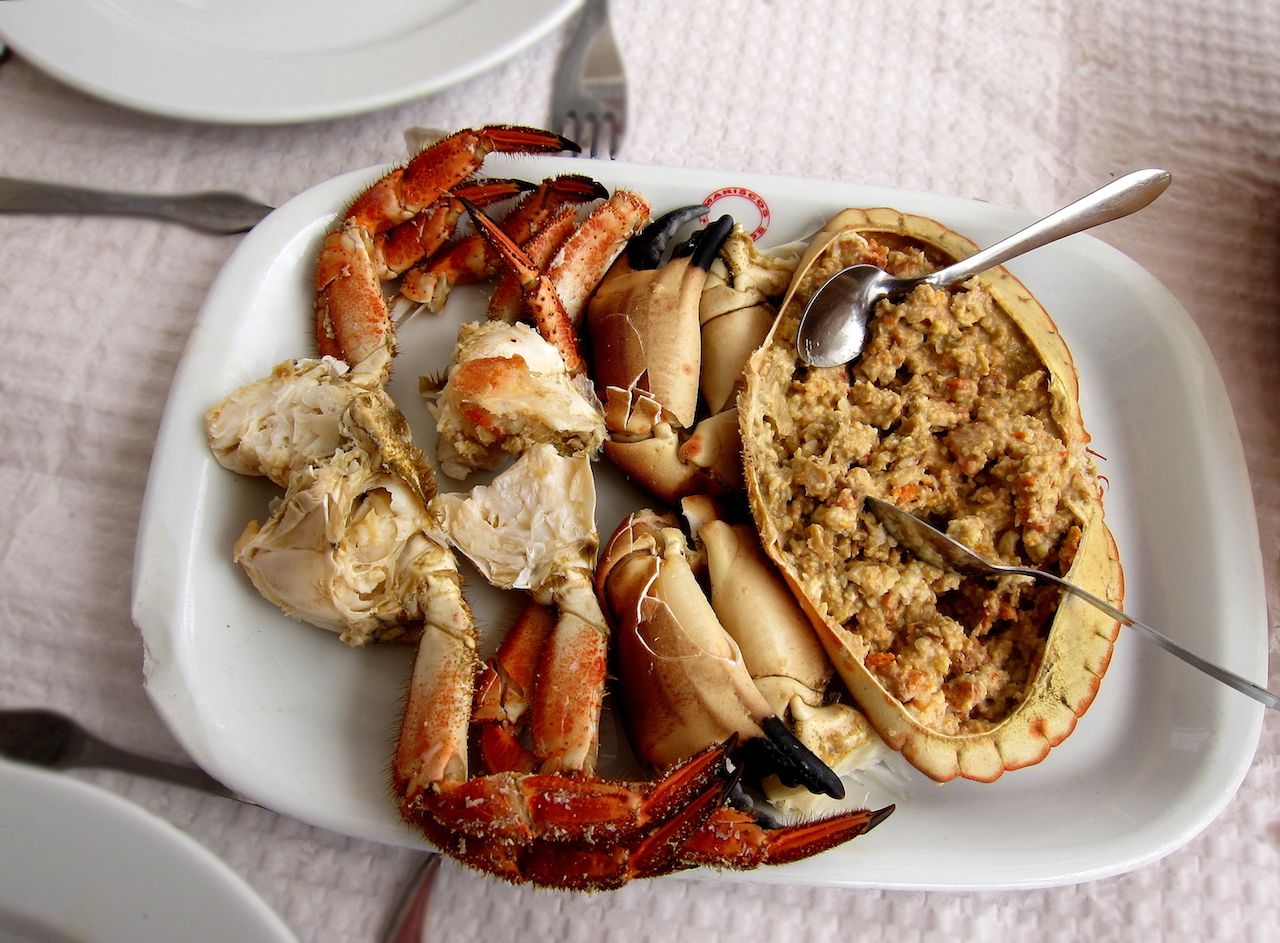 Sapateira recheada, or stuffed crab, is the highlight of any seafood meal in Portugal. You can order it on its own or as part of a seafood platter. The delicious spread that comes inside the shell combines fresh crab meat with mayo, onions, mustard, boiled egg, and paprika. All you need is a few crackers to dip in, and you’ll have the perfect summer snack. 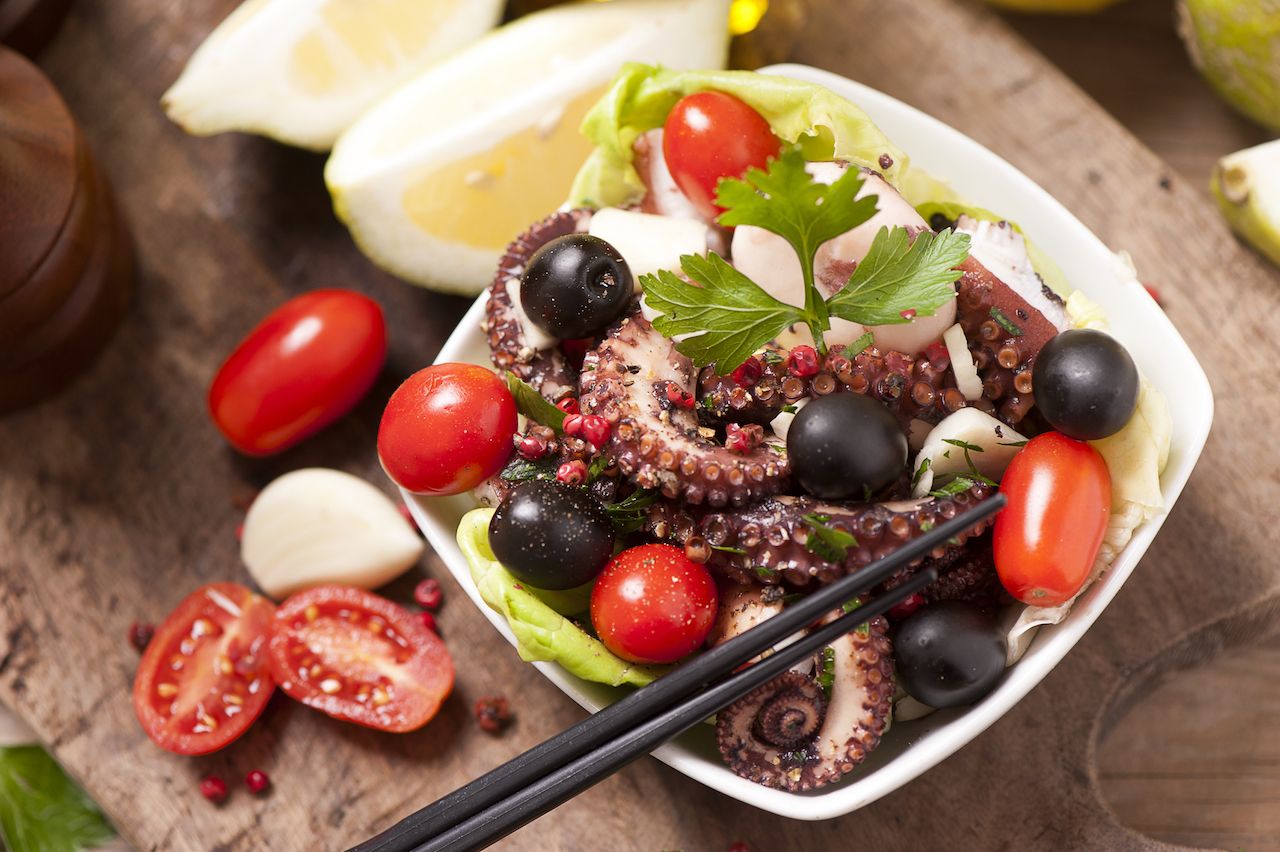 Even if you’ve never tried octopus before, you’ll love this refreshing salad. To make a salada de polvo (octopus salad), you’ll need octopus, tomato, onion, olive oil, and a generous amount of parsley, coriander, and other herbs. Some people also like to add potatoes or bell pepper, but it tastes just as good without them. In Lisbon, give it a try at Sem Palavras or Sol e Pesca. 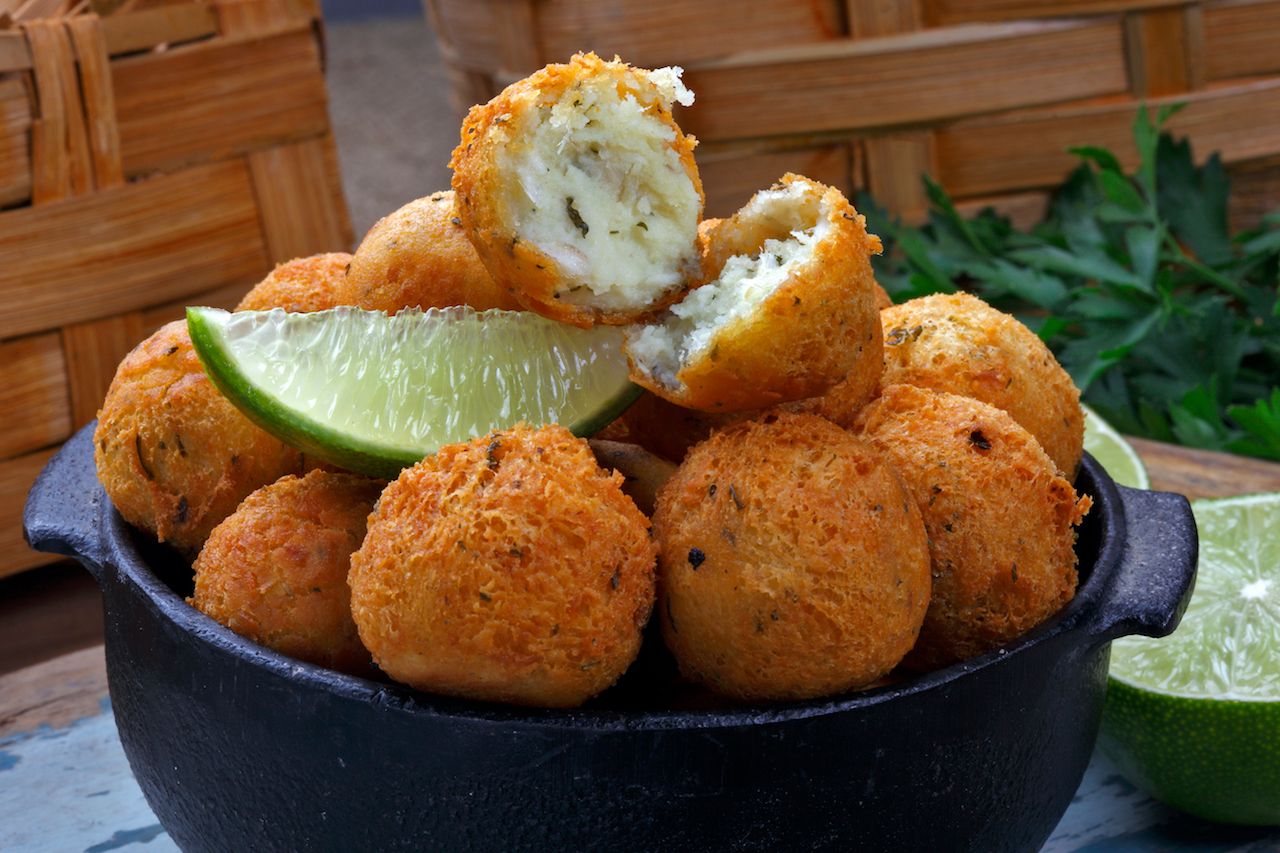 While most seafood dishes require you to sit down, pastéis de bacalhau are the perfect snack to eat on the go. Made with shredded cod, potatoes, eggs, parsley, and onion, these small treats can be found in any Portuguese café. Cod was one of the many ingredients Portuguese navigators brought back during the Age of Exploration in the 16th century. It became a staple of the local cuisine despite not being fished off the coast of Portugal. You’ll find the best pastéis de bacalhau at Olhó Bacalhau inside the Time Out Market. For a cheesy version, try the ones from Casa Portuguesa do Pastel de Bacalhau. 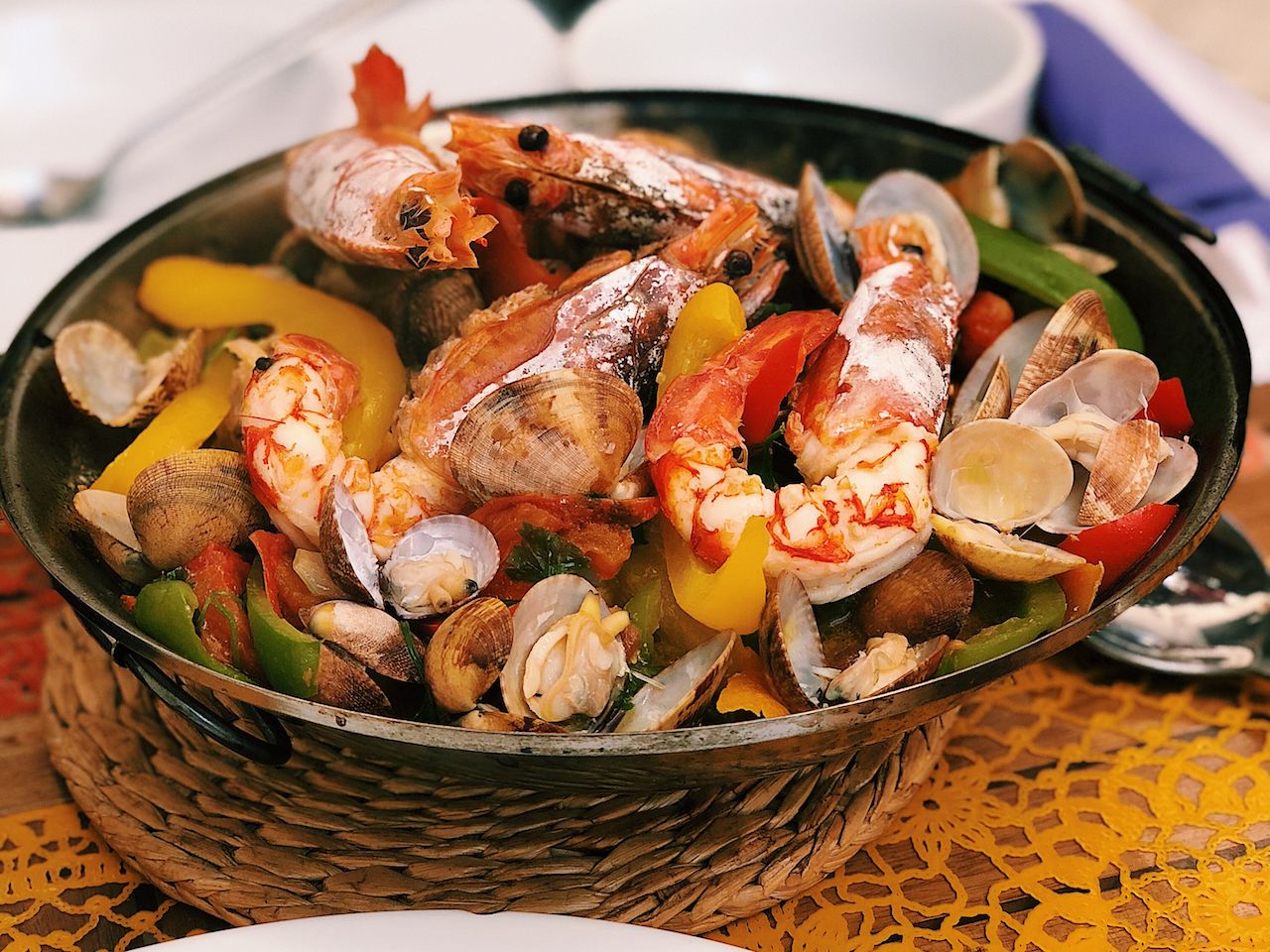 Cataplana de marisco is a seafood dish from the south of Portugal. This traditional stew usually contains a variety of shellfish, including shrimp, clams, and mussels, mixed with potatoes, tomatoes, and onions. What makes this dish special is the cataplana, a clam-shaped pan used to cook the stew. The best cataplanas come from the Algarve, but if you’re in Lisbon, you should try one from Cataplana da Gina. 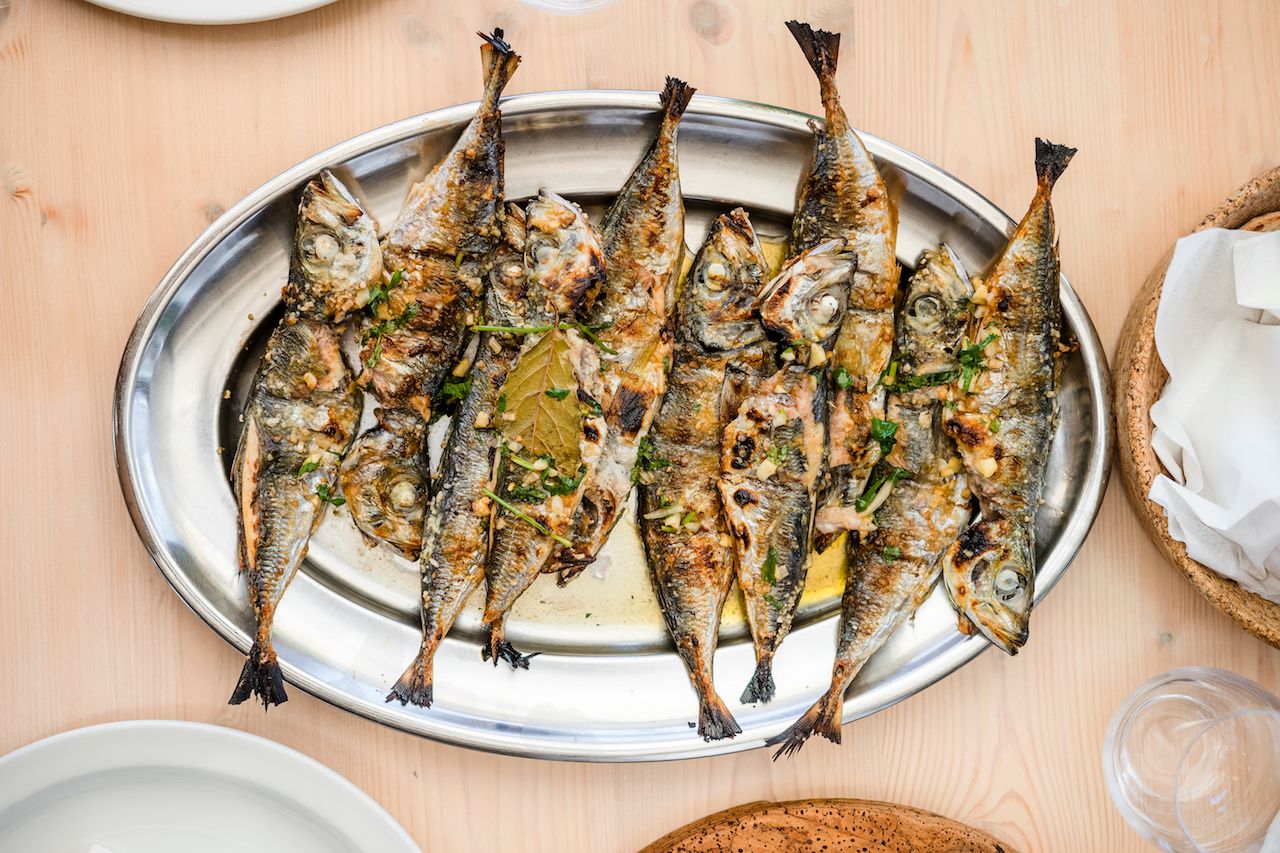 Portuguese love eating peixe grelhado, or grilled fish. While you’ll hear a lot about sardines, there are many other fish you should try, like carapau (mackerel), robalo (seabass), and dourada (golden bream). Locals usually grill the fish over charcoal, which gives it a nice crispy texture. And if you learned to eat in Portugal, then you know there will always be a green pepper roasting alongside the fish. As for seasoning, Portuguese only use salt and olive oil. Sounds simple, but as long as you have fresh fish, that’s all you need. The best places to try grilled fish in Portugal is in fishing towns like Sesimbra, Cascais, and Setúbal.