When you tell your friends you’re going on a trip to Denali, the reaction will likely be a mix of awe, jealousy, and questions about where Denali actually is. When you tell them you’re going in winter, in a rented car, don’t be surprised if those reactions turn to utter confusion.

Yes, winter in Alaska presents a lot of challenges, but it also rewards you immensely for conquering them. A Denali road trip might sound daunting, but it’s actually easier than you might think. The trip from Anchorage to Denali National Park takes just around four hours, and pretty much follows a single highway. It sounds simple enough on paper, but there are several considerations you need to make before embarking on your journey — not only to ensure your safety, but also to truly maximize your time on the road and get the most out of the trip. From choosing your ride to sightseeing along the way, here’s everything you need to know about road-tripping to Denali in the winter. 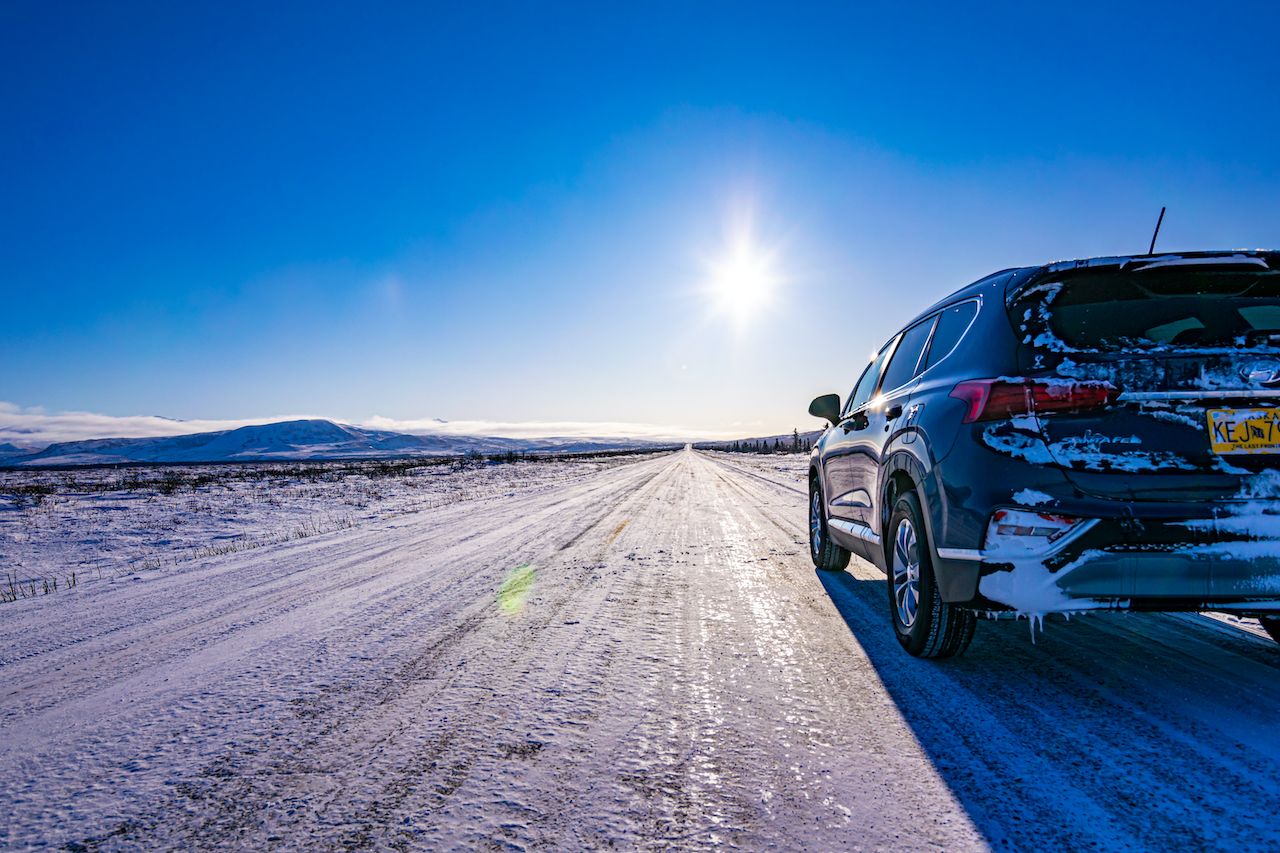 The most important decision you’ll make on your trip has nothing to do with hiking equipment or cold-weather gear — although those things are important too. Your choice of vehicle will be the most crucial factor in determining whether your trip is smooth or bumpier than necessary.

Despite what your friends might tell you, driving in Alaska isn’t impossible, or even ill-advised. It just requires more concentration and preparation. If you’re serious about a winter road trip through Alaska, a four-wheel drive car with snow tires is not optional. Black ice and snow cover can make the highway pretty slick, and without proper traction it can be dicey to navigate. As temperatures in Denali frequently hover below zero, you should also make sure to rent a vehicle with an engine block heater. A heater will keep your engine warm and running in subzero temperatures, and save you from the dreaded predicament of being in the middle of nowhere with a car that won’t start.

Before leaving the rental desk, double-check that the car has been fully winterized. That means winter windshield wipers, side and rear defrosters, a cold-weather battery, and antifreeze. You also won’t regret renting a car with heated seats.

The drive to Denali from Anchorage along the Parks Highway is 236 miles and takes around four hours, but road conditions could easily add an hour to two to the drive. If you can, start your journey in the morning, giving yourself plenty of time to take it slow on potentially icy roads, and to make pit stops along the way. Denali might be the destination, but that doesn’t mean you can’t make time for some good old fashioned Alaskan charm along the way. 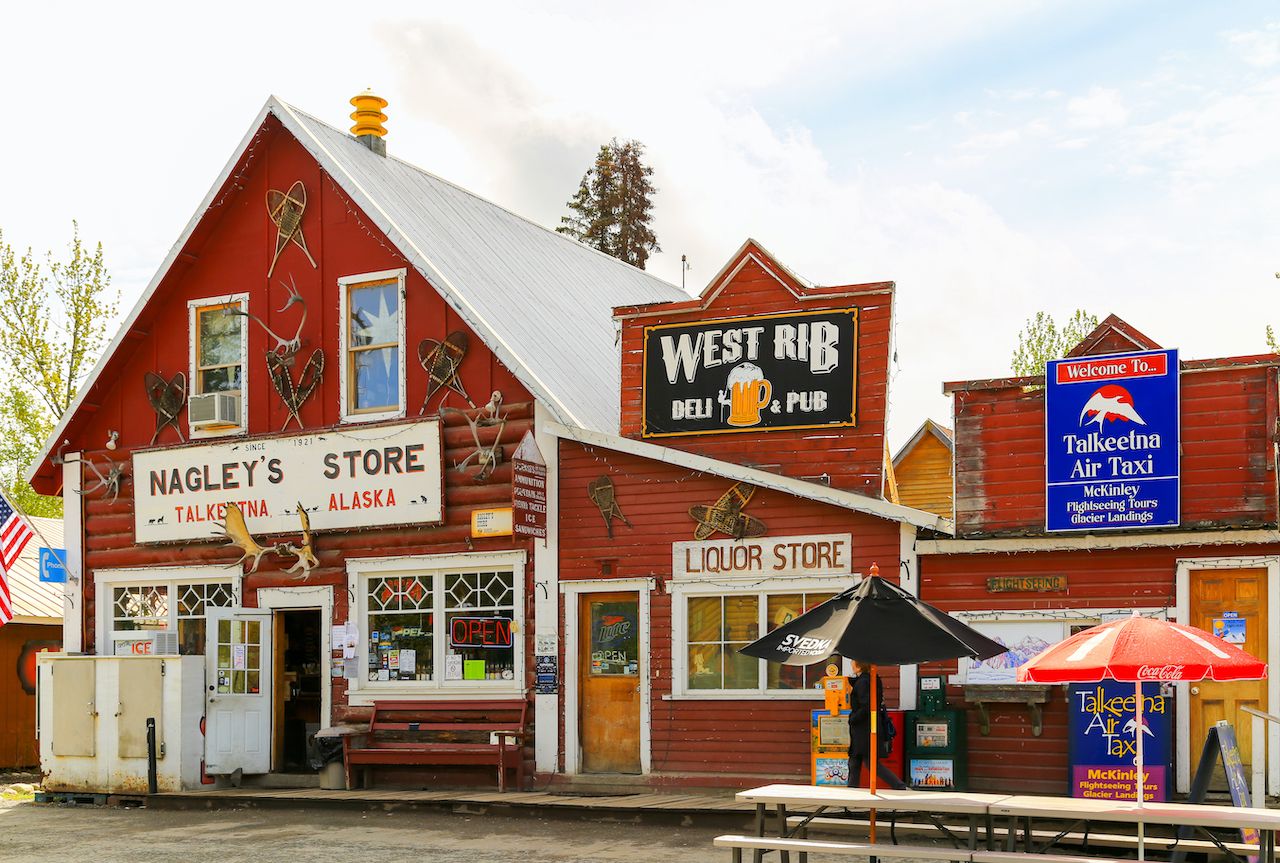 Some 118 miles and just over two hours from Anchorage, the small town of Talkeetna is the perfect midway point for your road trip. If your only conception of Alaska came from postcards and TV shows like Northern Exposure, this town of 876 people will feel incredibly familiar. Getting lost in Talkeetna is objectively impossible. The town consists of three or four streets, lined with small eateries, rustic inns, and craft shops. Many shops will be closed in the winter, or have limited hours, but if you’re intent on collecting souvenirs with an authentic feel, Talkeetna’s craft shops are a must. They carry art, jewelry, and other trinkets made by local artists, and since the town isn’t exactly brimming with tourists in the winter, you’ll likely have the whole place to yourself to chat with the shopkeeper.

If you’re planning to stay the night in Talkeetna — which I’d highly recommend — visit the Talkeetna Roadhouse, a local institution since 1944. One of the last true roadhouses in Alaska, this cozy inn will give you a real dose of Alaskan culture. Upon checking in, the innkeeper didn’t inform us about breakfast, the Wi-Fi code, or check-out policy, but about the poltergeist who lives downstairs and “likes to move things.”

While Talkeetna is considered the gateway to Denali, there aren’t exactly a myriad of hiking trails or outdoor activities here. There is, however, a quiet path leading under the Talkeetna Railroad Bridge that is the perfect illustration of Alaska’s simple winter pleasures. The path takes no more than a half-hour to walk, and gives you a peaceful view of the bridge, the frozen lake, and if you’re lucky, a moose traversing the ice. 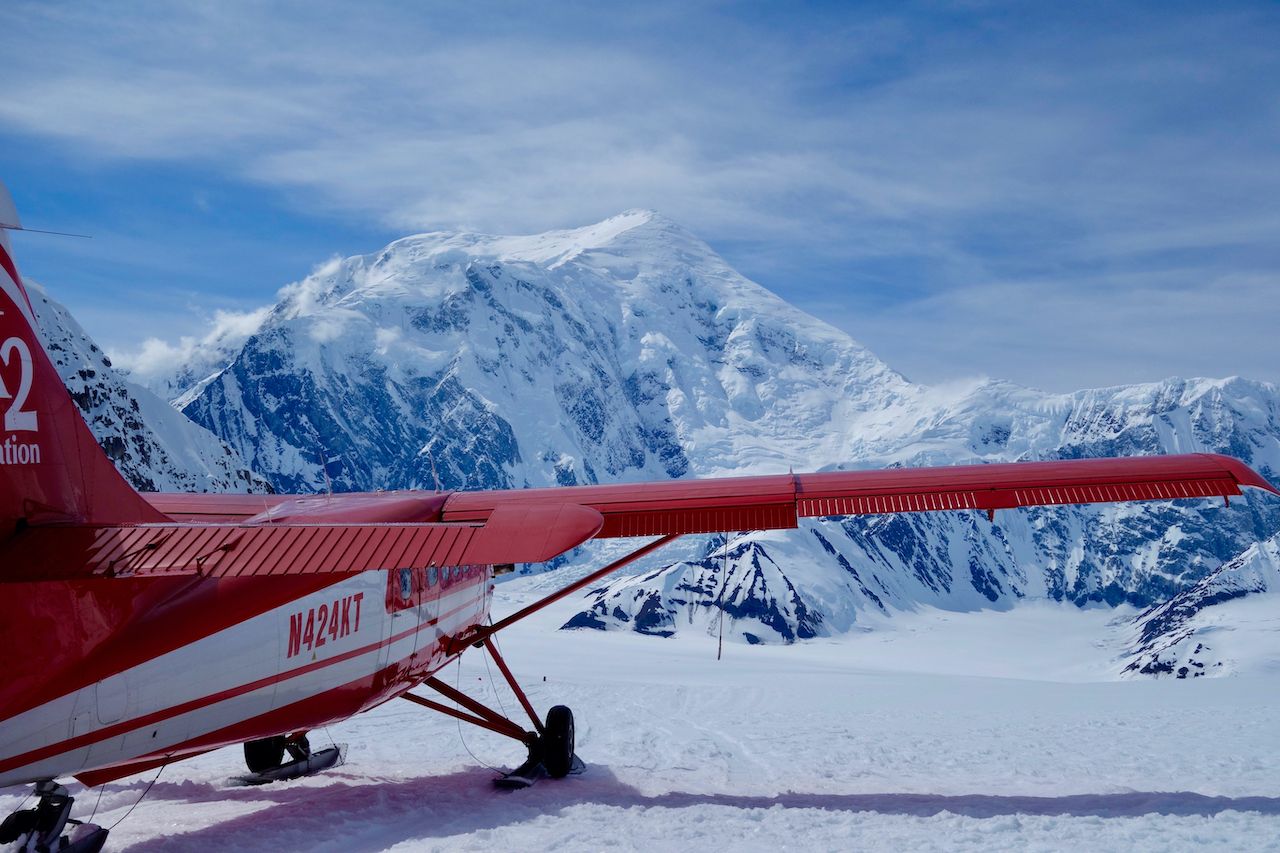 For a more exhilarating experience, and a sneak peek at what Denali has in store, book a flightseeing tour with K2 Aviation. Leaving right from Talkeetna, these tours offer stunning aerial views of the Denali range, and some even land on the glacier and allow guests to walk around. Safety is paramount, however, and since the weather systems on Denali can be unpredictable, don’t be surprised if your flight is canceled due to weather.

Before you leave town, grab breakfast at the Roadhouse. To describe the breakfast as “hearty” would be an understatement. Its specialty is the “Full Standard” — six eggs, Alaska Yukon gold potatoes, four reindeer sausages, and thick toast — which, according to the innkeeper, was “basically for people who just finished hiking Denali and haven’t had a real meal in weeks.” So of course I ordered it, along with the rhubarb apple hotcake, which was larger in diameter than a frisbee. Trust me, you won’t be hungry again until at least 8:00 PM, which works out nicely because there are no restaurants, cafes, or grocery stores anywhere between Talkeetna and Denali. So load up on eggs, potatoes, and hotcakes, and hit the road.

First thing’s first: Fill up your gas tank. There are a few gas stations sprinkled intermittently along the highway, but some are closed for the season, and in subzero temperatures it’s better to be safe than sorry. Because food options between Talkeetna and Denali National Park — just under three hours and 163 miles — are scarce, you’ll need to stock up on groceries before you embark on the final leg of your journey.

There’s a small convenience store in town called Nagley’s, that carries snacks and other small essentials, but for a wider selection check out Cubby’s Marketplace 20 minutes south of Talkeetna, right off the Parks Highway. Cubby’s has a deli counter, extensive frozen food section, fresh pastries, and snacks, so if you plan your meals in advance, you should be covered.

Many of your groceries will only be useful if your lodging is equipped with a kitchen. The majority of hotels and guest houses around Denali are closed in the winter, but Tonglen Lake Lodge is open year-round, offering several guests rooms with a shared kitchen. Since winter isn’t tourist season, you probably won’t have to vie for stove time with four other guests — but you’ll definitely be sharing the living space with Donna Gates, the lodge’s owner and proprietor. Having lived on Tonglen Lake for 40 years, Gates is an encyclopedia of knowledge about Denali. If you’re lucky, she might even take you on a walk with her five dogs through the backwoods of her property, which culminates in an impressive view of Pyramid Mountain.

From Tonglen Lake Lodge, you will be well-positioned to drive 15 minutes to the park’s entrance. Many hotels and businesses might shut down for the Alaskan winter, but guide services are more available and active than ever. Traverse Alaska and Outer Range Dogsled Tours operate a wide range of snowshoeing, backpacking, fishing, glacier trekking, and dogsled tours.