Standing around the wooden mortar and pestle, Mrs. Ndiaye started to pound the spices with a grin, clearly excited she was able to share this piece of her culture. When I told her I wanted to learn how to cook thieboudienne, rice served with spiced fish and stewed vegetables, she hustled to gather the list of ingredients that we would need to prepare the dish. Mrs. Ndiaye was not a chef, just my hairdresser. But as I quickly learned, there is not a single woman in the land of Teranga who does not know how to cook a good thieboudienne.

Thieboudienne means “rice with fish.” This simple dish is a national delicacy in Senegal, a country located on the west coast of Africa with easy access to everything the sea has to offer, including food.

While oral tales vary slightly when it comes to conveying the inspiration behind this dish, a renowned community cook named Penda Mbaye is often credited with making the first documented thieboudienne in the 19th century. Nonetheless, one central element binds all the different narratives: the love of culinary arts, and a passion for sharing.

According to local storytellers, Mbaye used to work as a cook in one of Saint-Louis’ colonial residences. Back then, Saint-Louis was the political and cultural capital of Senegal and the principal place of residence of French colonizers. Mbaye would cater for large ceremonies, official events, and elite social gatherings in Saint-Louis. However, there came a season where the region experienced a shortage of barley, which was the more popular grain in Senegal’s kitchens at the time. Mbaye used rice instead, which gave birth to the thieboudienne recipe. Nowadays, variants of the recipe exist across Senegal, where fish is replaced by other elements, including thiebou yapp (rice with beef or lamb); thiebou guinar (rice with chicken); and thiebou guerte (rice with peanuts). 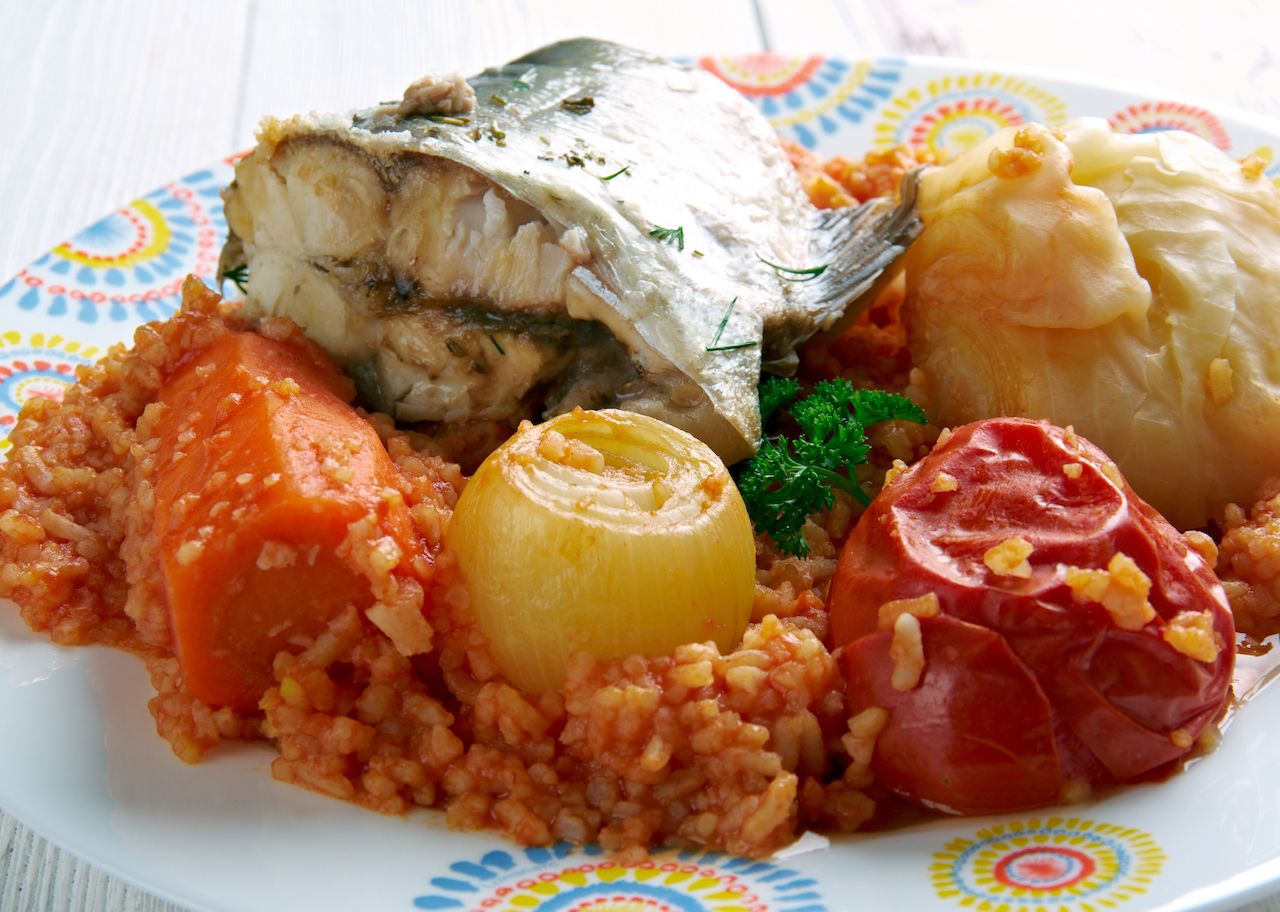 Stuffing the fish is a crucial part of making thieboudienne. This process ensures that the fish absorbs spices while it cooks. Garlic, pepper, and salt are blended together to season the fish but its distinct flavor really comes from the use of three regional West African spices. The first one is netetou, also known as sumbala, made from the African locust seeds that are known in Senegal as nere seeds, comparable to miso paste. The second is guedj, a variant of salt fish, also commonly used in Caribbean cuisine. Saltfish adds an extra layer of seasoning and aroma. Finally, yété gives the thieboudienne its famous Camembert cheese flavor — earthy and a little funky.

Many of the original and indigenous staples of West African cuisine are featured in thieboudienne: Rice, at the cornerstone of this recipe, accompanies almost every West African meal. In thieboudienne, a specific variant of rice called “broken rice” is used. Tubers and root vegetables such as cassava (also called manioc or yucca), play a big role in West African cuisine and are also present in thieboudienne, as well as pumpkin, potatoes, eggplants, okra, carrots, and cabbage. They are all cooked separately (to avoid overcooking and pureeing). Once al dente, they are added to a big pot toward the end of the cooking process.

The cultural significance of thieboudienne

As lunchtime approaches in the streets of every main city in Senegal, you can see shoppers and passersby alike headed to their favorite restaurant to pick up lunch. Often, they’ll be eating thieboudienne. Served in two pots or containers (one for the rice and one for the deliciously stewed fish mixed with vegetables), you can recognize one’s order because the two pots are wrapped in a strip of cloth to facilitate transport.

On the surface, the dish might seem basic. After all, it’s just rice mixed with fish and vegetables. But at its deepest core, this blend of colorful African spices and juicy vegetables heals the hungry soul and brings joy to Senegalese families and their guests.

Thieboudienne is served almost on a daily basis in most Senegalese homes and restaurants. If you happen to step in a store at lunchtime, the locals will likely invite you to share in their meals. Everyone sits around the large platter of rice and fish, scooping up rice and pieces of fish to eat with their hands.

In West African culture, culinary traditions and recipes are passed on from one generation to the other because a house where the food smells good is a house that gives birth to prosperity and abundance. Penda Mbaye certainly passed on her culinary passion to her entire country. Today, the thieboudienne she originally created has become more than a traditional culinary delight. It is the national dish of Senegal — a dish that feeds, satisfies, and unites.