The second time my five- and eight-year-olds scrambled up the side of a cliff like a pair of bighorn sheep, all giggles and high-fives as they rappelled back down, I saw it coming: My family was falling for Mammoth Lakes, California, and falling hard. Strange, I thought, as up until recently, I’d never heard of the place.

I grew up in Southwest Florida, as did my husband, Buddy. We’ve raised our family there, namely those two kids-turned-bighorns I mentioned — our eight-year-old son, Lincoln, and our daughter, Penelope, who’s five going on 16. Back home, we struggle with the same things most families do: balancing screen time, school time, and family time. Lincoln has a notorious love for video games; Penelope grabs for the iPad whenever we’re not looking. We try to unplug and get outdoors as often as we can, and usually for us that means hitting the balmy beaches of the Gulf of Mexico or tromping through the swampy grasslands of the Everglades. 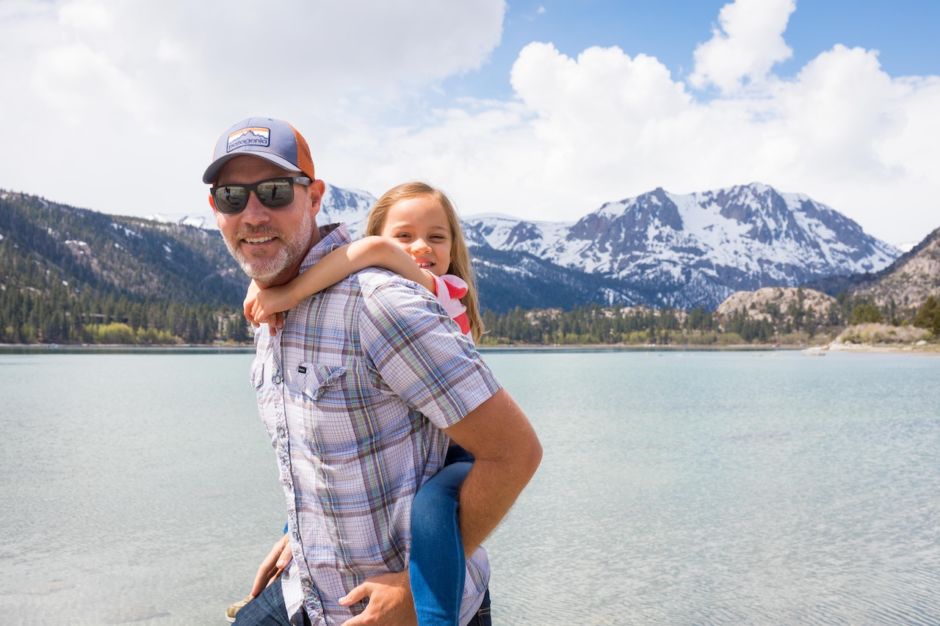 I told Lincoln we were going to a place called Mammoth Lakes in California. He asked if it was near Rodeo Drive and if we’d see Lamborghinis. Not the response I’d hoped for.

So I sat down with him to research the area. That’s where the seeds of my now-fully-blooming love for this place were laid. A quick web hunt paints a stunning picture of Mammoth Lakes in summertime: hiking, mountain biking, horseback riding, waterfalls, picturesque lakes big and small, easy access to Yosemite National Park and its innumerable wonders.

Reading about such adventures is one thing, experiencing them is quite another. And experiencing them through the eyes of my two Florida kids who’d never seen snow or actual mountains? Well, that’s how you fall in love.

Driving into Mammoth Lakes, we didn’t know where to look. The city is surrounded by the jagged peaks of the Sierra Nevada, including Mammoth Mountain, which rises 11,053 feet into the town’s western sky. Everywhere you turn there’s another stunning peak. It’s a cozy feeling, being hugged on all sides by sky-scraping wilderness. 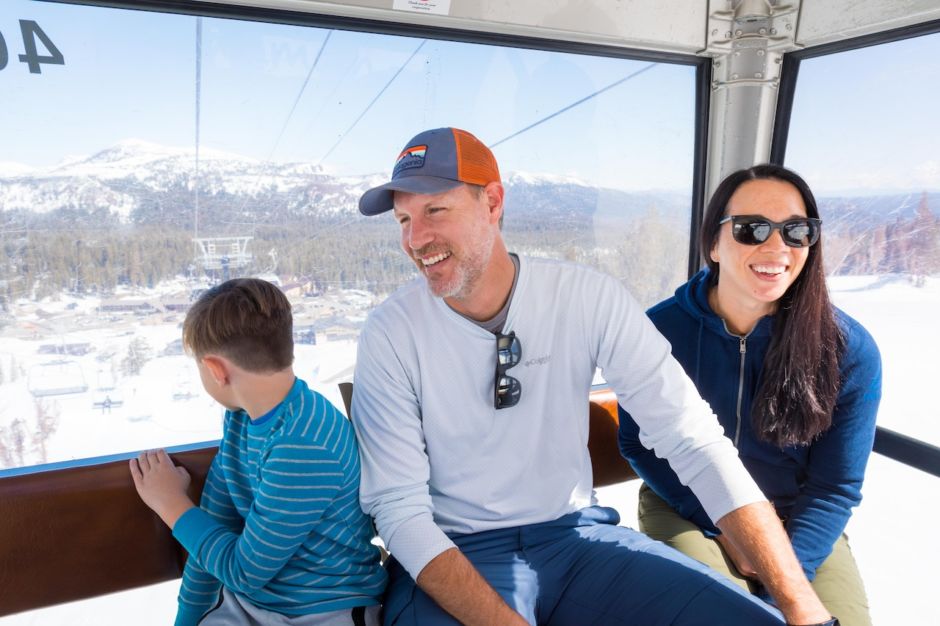 To learn the lay of the land, a ride on the Panorama Gondola is a must — we made it our first stop. During winter, these window-encased carriages transport skiers and snowboarders to their launching points; during summer, they take guests to the tiptop of Mammoth Mountain, home to the Eleven53 Interpretive Center, where the 360-degree views left my kids slack-jawed in amazement. The center’s displays tell the story of Mammoth Lakes and the surrounding High Sierra, from its unique geology, wildlife, and climate to the feeding habits of the many black bears that share this undulating range. I thought the 11,000 feet of eleveation might slow the kids down, but it just got them going.

The next day took us to 56-year-old Kittredge Sports, where we met our fly-fishing guides extraordinaire: Terry and Steve. Our family may be new to fly-fishing, but we know the other kind well. Back in Florida we ply the backwater flats for redfish and snook, then head deeper into the Gulf for grouper and snapper.

But the Mammoth Lakes area is trout country. And Terry and Steve know exactly where to find them and can teach just about anyone how to reel them in — even a gangling eight-year-old and his flower-picking little sister. After buckling our kids into two of the smallest pairs of waders and boots in the store (plus one of the largest pairs for that six-foot-four husband of mine), the guides took us to an insanely gorgeous stretch of the Owens River.

I didn’t care what we caught. I could have sat in that tall grass, listening to the gurgling water and soaking in those views the entire trip. But, as Steve reminded me, “Catching fish is our job. It’s a point of pride for us.” Maybe the trout heard him, because two minutes later, Lincoln reeled in a 12-inch cutthroat. But the one hooked was Linc — he spent another three hours out there until Buddy and Terry dragged him back to the car, his rod slung proudly over one shoulder. 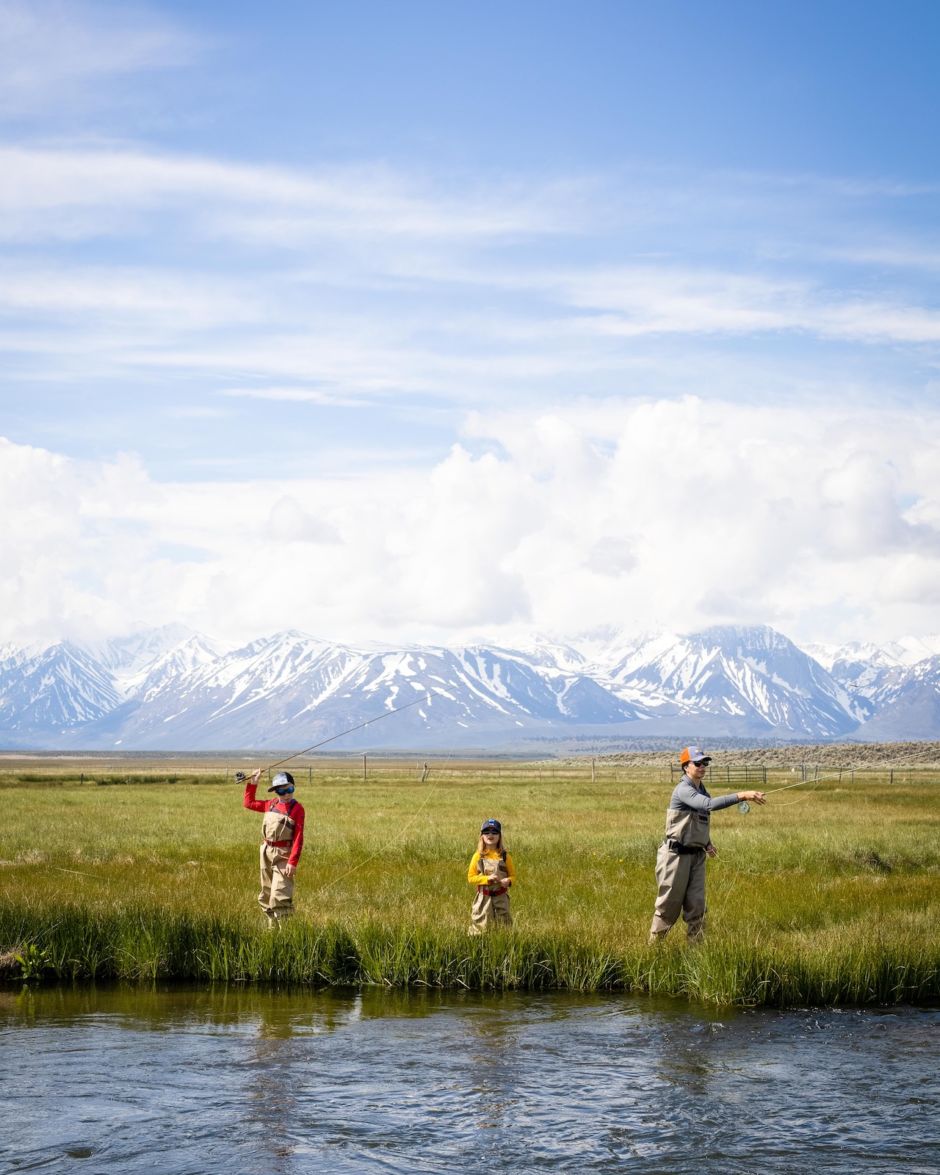 Even Penelope learned how to cast and drift…and she only hooked Steve a small handful of times. Rock climbing, it turns out, is more her speed. Our next adventure introduced us to some more amazing locals (my love for Mammoth Lakes was cemented by the outstanding people we met there), the founder and lead guide of Ground Up Climbing, Clay and Forrest. “Are those your real names?” Lincoln asked, in the way only kids can get away with. “Yup. Sure are,” Forrest replied, as we hiked through a stand of evergreens to the rocky slab awaiting us.

Fishing may not have been entirely new to us, but climbing was. Not that you’d know it watching my kids on that sunny morning along a craggy edge of June Lake. Helmets and harnesses on, Lincoln kicked things off by picking his way slowly but surely up a crevice-lined section of rock. His pint-sized sibling caught him halfway up, stopping for a quick high-five before she scurried to the top of the route like a chipmunk. Now it was my and Buddy’s turns to go slack-jawed. Who knew she had it in her?

She tackled the next, more difficult climb just as easily. The third had some bigger holds that tripped up her tiny legs slightly, meaning she reached the top in three minutes instead of two. For comparison, it took me almost 10 minutes to finish that route. And I fell. Twice. 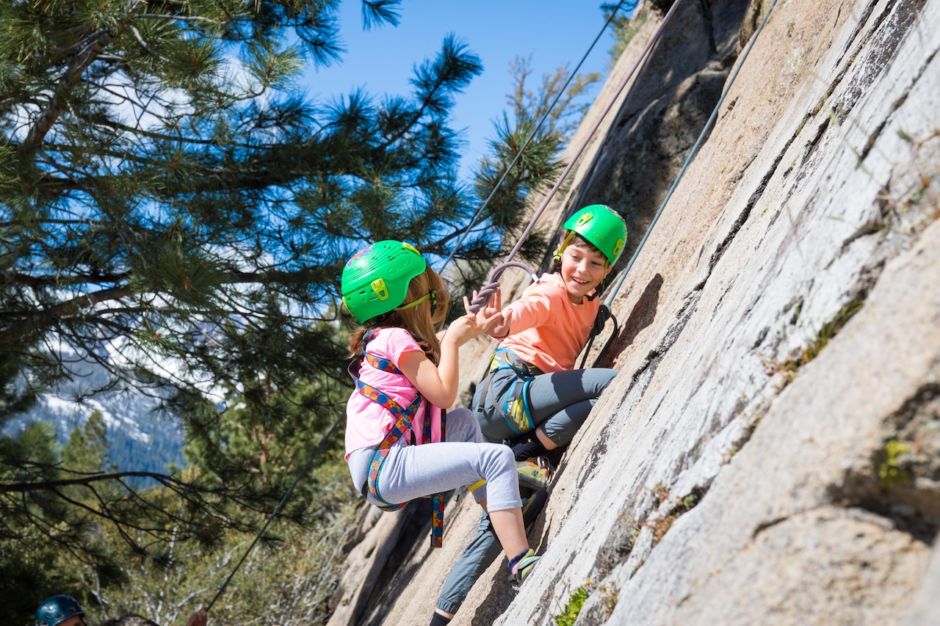 Clay celebrated our collective climbing victories with fist bumps and more high-fives. He asked if we came to Mammoth Lakes often. I told him it was our first time. “Not many people know about this place,” he said. “It’s like the country’s best-kept secret. Especially in summer.”

Back in town, we celebrated at Bleu Market & Kitchen with craft cocktails and slow-braised, California-raised short ribs for the adults. For the kids: Penelope took a trip down the salad bar (our little climber loves her greens), while Linc chose a thickly piled steak sandwich on Bleu’s house-baked artisan bread (his predilection for carbs and meat balances things out in our family).

Great food, I learned, abounds in Mammoth Lakes — from the swirly lattes, pretty acai bowls, and hefty breakfast sandwiches at Stellar Brew, to the happy-hour margaritas and velvety tamales at Roberto’s Cafe, an almost 35-year-old Mammoth Lakes institution, beloved by locals and visitors alike for its fair prices and generous portions. The kids swooned over the hand-crafted scoops at Hugs Ice Cream; my husband and I swooned over the craft beers, churros, and pork-belly banh mi at Mammoth Brewing Company, where you can while away a sunny afternoon soaking in mountain views from an outdoor seating area set with picnic tables, barrels, and boulders.

Refueled, our next stop took us to the kind folks at Footloose Sports and Wave Rave, two of the many local sporting goods shops on Main Street. During winter these stores rent ski gear and snowshoes; in summer they swap those for paddleboards, mountain bikes, and electric bikes that make pedaling uphill at elevation an actual breeze. 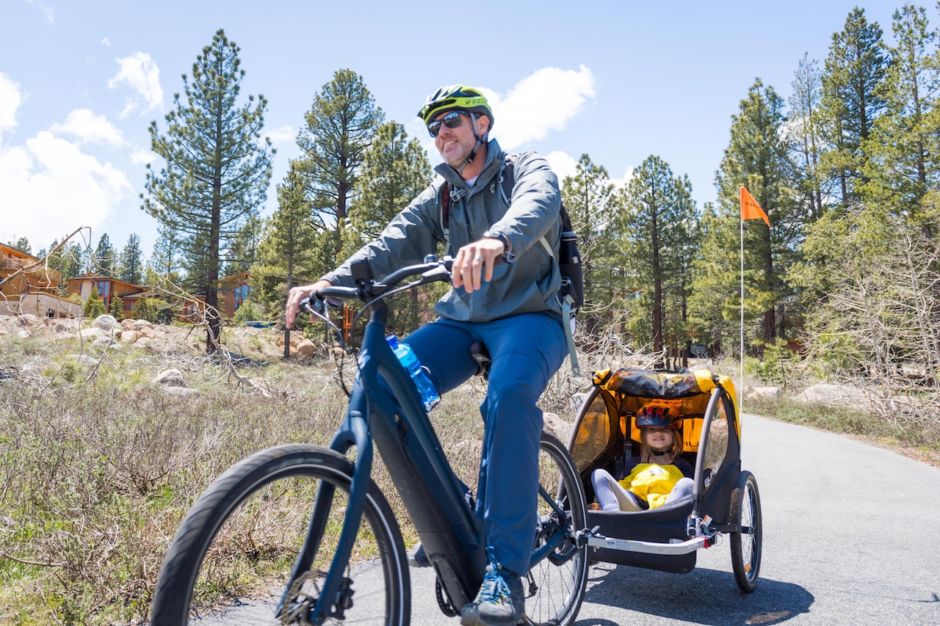 The shops’ staff offered maps, detailed instructions, and friendly waves as we set out on the Town Loop, a 7.3-mile paved and gravel path that gave us neck-craning views of the snow-capped Sherwin Range, Mammoth Creek, and the quaint neighborhoods of Old Mammoth. As we coasted over wooden bridges and down small hills, there was no talk of video games, no crying for the iPad, just two kids with the wind in their hair and the mountains all around them.

To balance these heart-racing adventures, we crammed in plenty of sweet and simple hikes to get a sample of the area’s often surreal terrain — like Mono Lake, a short drive down from Mammoth Lakes and a place we all agreed was otherworldly. 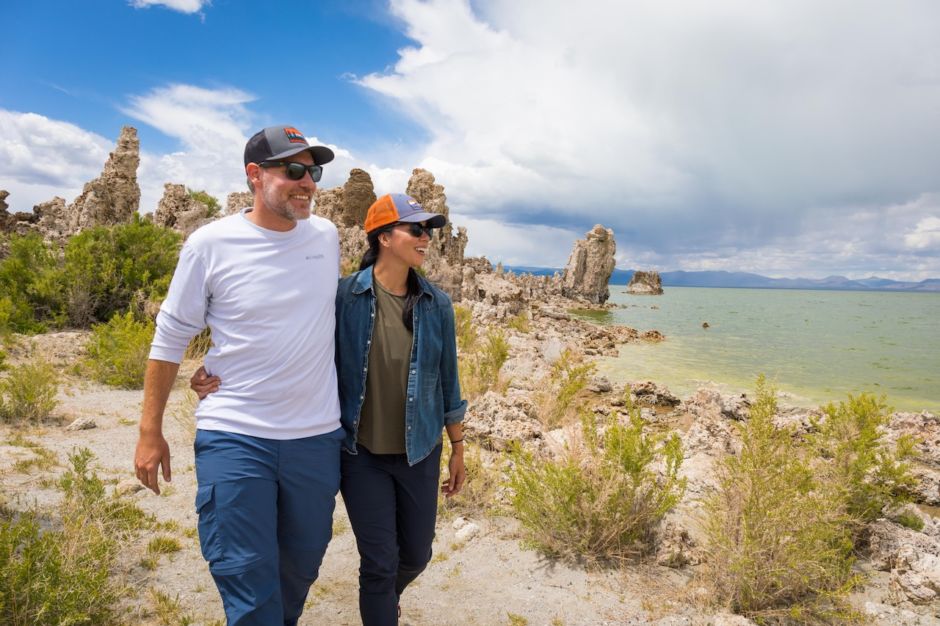 Mono Lake formed more than 760,000 years ago, and it has no outlets, meaning all the salts and minerals from the surrounding mountains collect in these 70 square miles of water with each rain. The result: A salty and turquoise wonder spiked with jagged columns of limestone known as tufas — or, as Penelope called them, “Giant sand castles!” “They’re like sand castles made of moon rocks,” Lincoln said. I couldn’t have put it better myself.

Near our trout holes in the Owens River, Hot Creek proved to be another kid-friendly walk that was almost as surreal as Mono Lake. It features geothermal springs that bubble bright blue at a scorching 400 degrees Fahrenheit — you’ll know you’re there when you see the plumes of steam drifting through the cool mountain air. 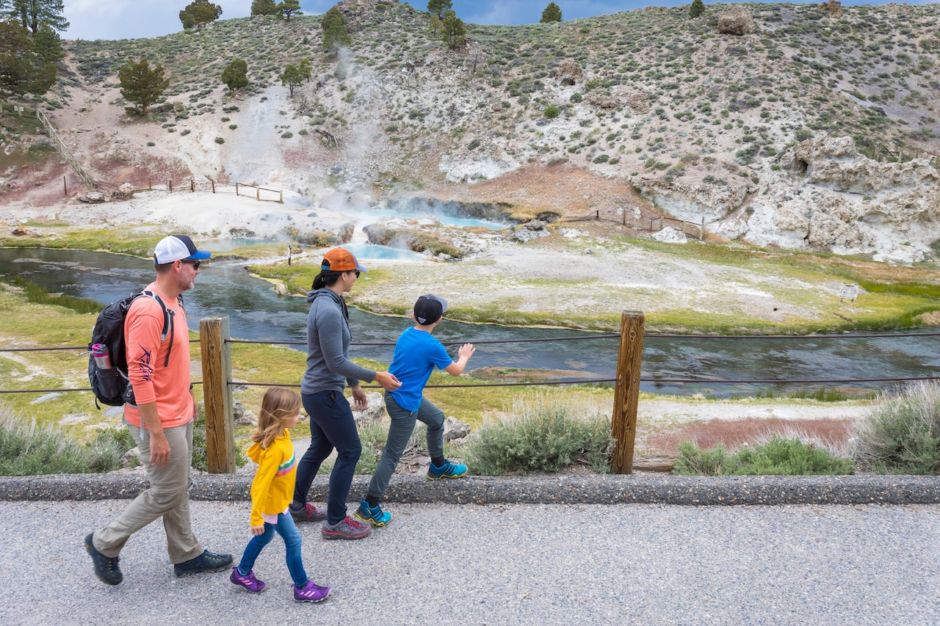 Speckled amid these highlight experiences were a slew of little, no-less-mesmerizing ones: skipping rocks along the breezy shores of Silver Lake; skateboarding at Volcom Brothers Skate Park; strolling The Village at Mammoth with ice cream cones in hand. It’s those details that make a trip to Mammoth Lakes all the more memorable.

Back at the Owens River, as she waited for her brother to finally put down his rod, Penelope clutched a bouquet of marigolds she’d plucked. She looked at the mountains and at her brother and dad still casting flies. 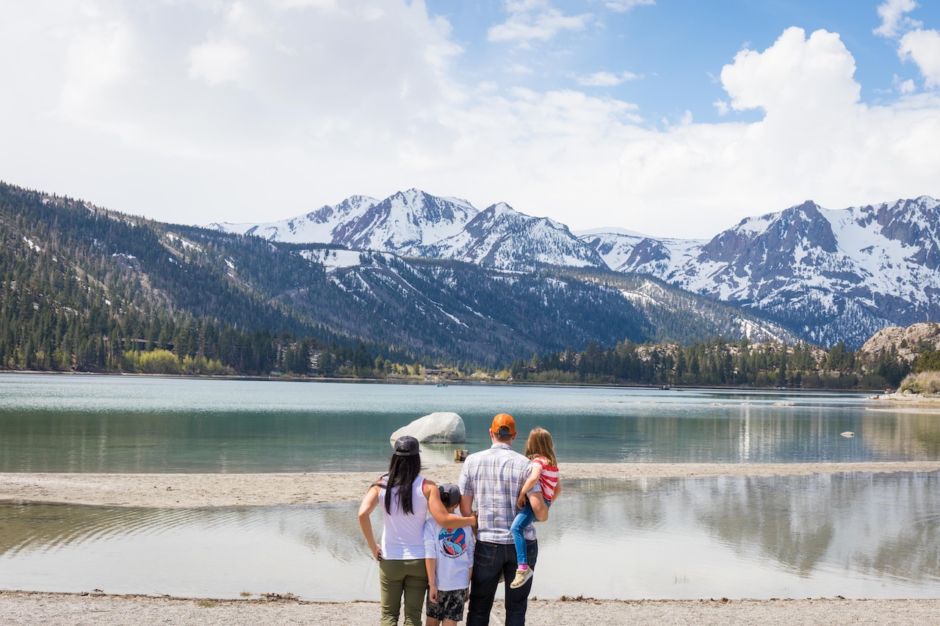 Looking back, I think that was it. That was the exact moment Mammoth Lakes made me fall in love.

This post is proudly produced in partnership with Mammoth Lakes Tourism.
Tagged
Travel
What did you think of this story?
Meh
Good
Awesome

Family Ski Trip To Mammoth Lakes: Everything You Need To Know

7 Ways To Experience Winter in Mammoth Lakes, Beyond Snowboarding

7 Mind-Blowing Landscapes in Mammoth Lakes, CA (and How To Explore Them)

How To Piss Off Someone From Mammoth Lakes, California

20 Signs You Learned To Drink in Mammoth Lakes, California