Sint Maarten has a special culture among Caribbean nations. The island is split between two European countries: On one side of the island the Dutch, and the French on the other. But on this 37-square-mile island, there are more than 120 nationalities, and each has had a hand in creating Sint Maarten’s present-day culture. The best way to experience that culture, in my opinion, is through food.

The first people to live on the island were the Taino-Arawak and Carib. In the mid 1600s, France and the Netherlands signed an agreement to split the island’s natural resources and to use it as a strategic outpost between Europe and North America. British plantation owners then migrated to the island, and English become the dominant language in many circles. At the same time, enslaved Africans worked sugar plantations and salt flats until France and the Netherlands abolished slavery in the mid-19th century, leading to the island’s African influence.

While St. Maarten was part of the Netherlands Antilles between 1954 and 2010, people of Aruban, Curacaolean, Anguillian, Saban, and Statian descent settled on the island. Similarly, on the French side, known as Saint Martin, ethnic groups from Guadeloupe, Martinique, and France arrived. The island’s economy, which was once focused on salt and agriculture, shifted to tourism in the 1970s, leading to a diverse influx of migrants from India, neighboring Caribbean islands, French colonies in Southeast Asia, Dutch holdings like Indonesia, and large communities of people of Dominican, Guyanese, Haitian and Jamaican descent. Now, St. Maarten/St. Martin is a true melting pot that manifests itself in a delicious cuisine with many influences. And while there are plenty of fine dining restaurants worthy of a visit, the street food served in roadside spots known as lolos is just as incredible. 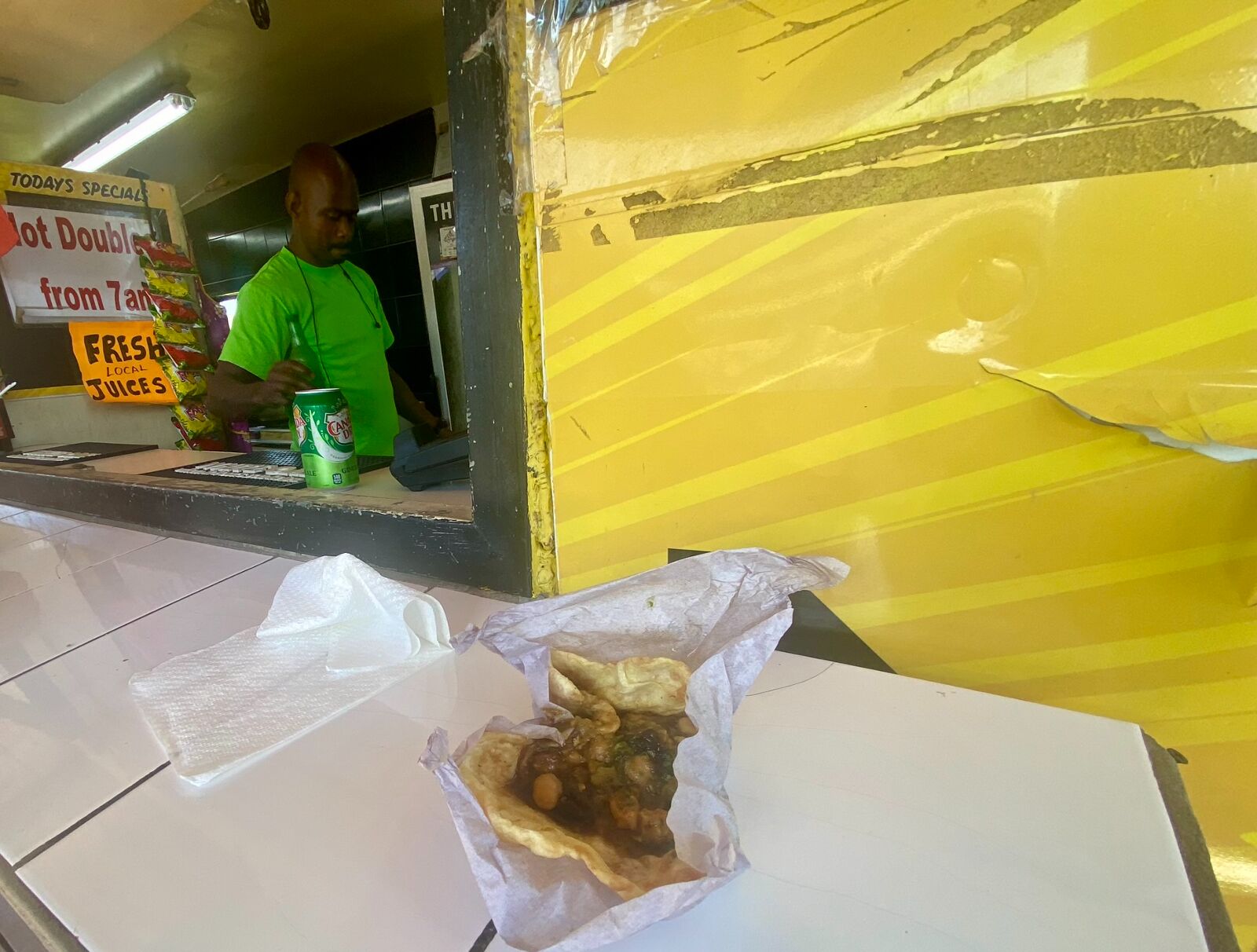 One of the most popular lolos in the country serves Indian food by way of Trinidad and Tobago. An hour and a half flight from Sint Maarten, nearly 40 percent of Trinidad and Tobago’s population is of Indian descent. Cindy, a Trinidadian who has lived in Sint Maarten for several years, serves delicious doubles and roti that have evolved with a Caribbean stamp on them.

Doubles consist of two fried flatbreads (bara) filled with curried chickpeas (chana) and various toppings, like chutneys, cucumber, and tamarind sauce, making the snack entirely vegan. Cindy has to work diligently in her little yellow trailer on the side of the road. Locals love her doubles so much that they will stand in line bright and early because it’s inevitable she will sell out, which is unsurprising once you take a bite. She asked if we wanted our food spicy or mild, and since I’ve been expanding my spice tolerance, I went for the spicy, and boy I am glad I did. The taste of Cindy’s doubles is complex — savory curry, sweet chutney, spicy sauce, and plush flatbread are a total party in your mouth.

The roti is made from flour, water, and oil, which Cindy cooks on a grill and uses to wrap curried chicken and more spicy sauce inside. The roti was enormous, and even though I split half with another member of the trip, I had a hard time finishing it, which was a shame since it was so tasty.

Sexy Beef, another beloved lolo, comes from the owner’s nickname for his girlfriend. Still, the name lives up to its expectations. The restaurant serves mouthwatering international cuisine with a creole flair and is known around the island for the satay. Satay is traditionally a dish of marinated, skewered. and grilled meat served with a spicy peanut sauce. It’s popular in Southeast Asia, especially in Indonesia, Malaysia, and Singapore. My plate came with mini skewers of chicken, pork, and beef, as well as a shrimp skewer covered in a spicy sauce — plus a side of rice and peas, steamed vegetables, and plantains. The sauces on the side, including the peanut sauce, took this already mouthwatering local favorite to the next level.

Sexy Beef is also one of the only lolos with a full bar. I ordered a margarita with curacao, which came blended and was very tasty. But when the owner asked if I wanted to try a “penetration shot” made with more than a dozen different liquors, I decided to go for it. If you’re looking for a place to hang out and party with the locals on the weekend, the restaurant gets lively. 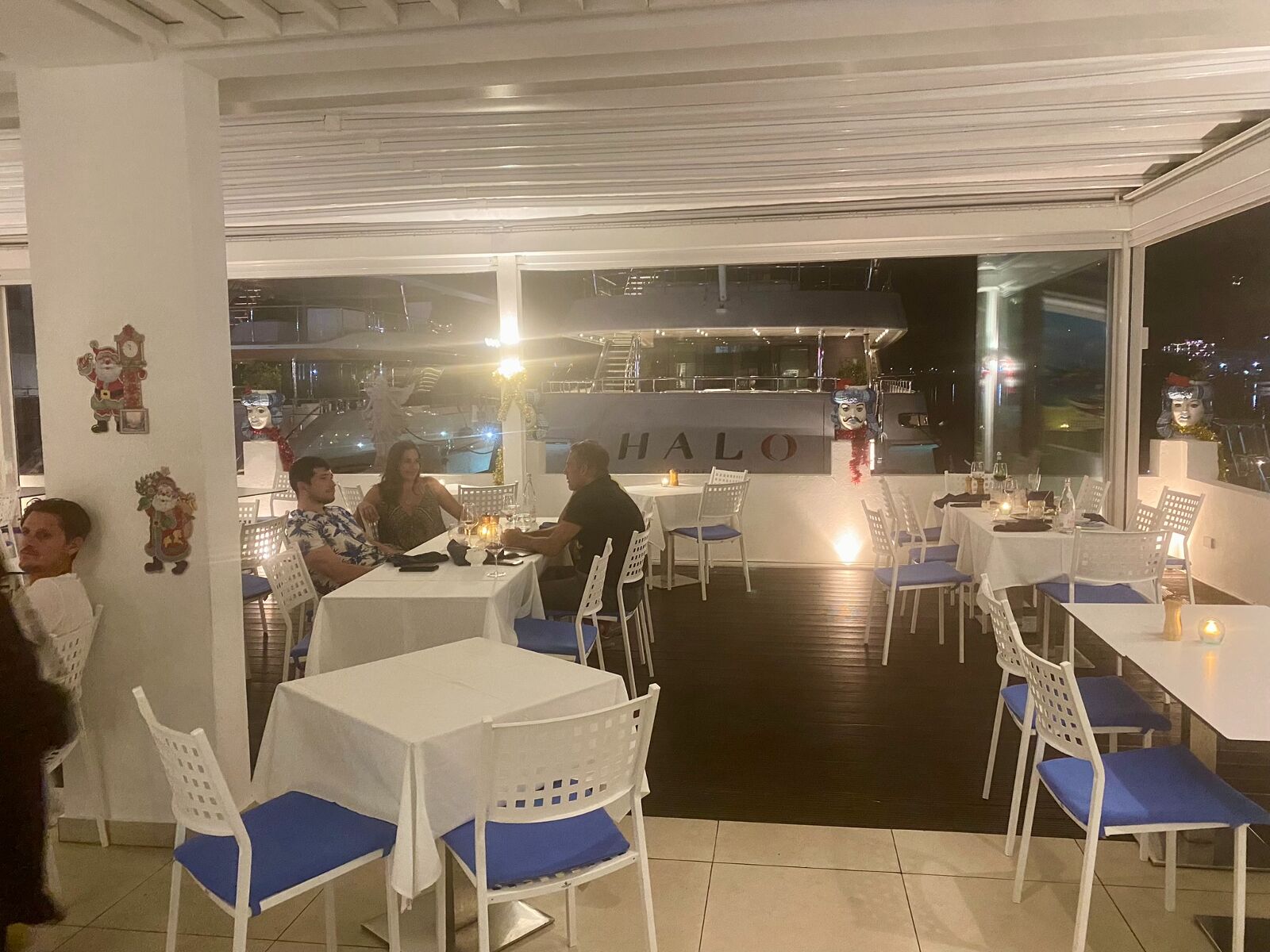 Italian food is probably the last thing on your mind when visiting the Caribbean. But Sale N Pepe, a brick-and-mortar Sicilian restaurant, is a must-visit. The story of Sale N Pepe is one of romance. Chef Davide Zagami came to Sint Maarten as a private chef in 2000. In 2002 he met his soulmate, and they got married in 2009. The two lovers eventually opened their restaurant in Simpson Bay, intending to create the kind of restaurant he knows back in Sicily. His desire for a restaurant on the water is the perfect romantic backdrop while you sit on the patio. And in 2019, the restaurant was named the best Italian restaurant by the leading Caribbean newspaper The Daily Herald. 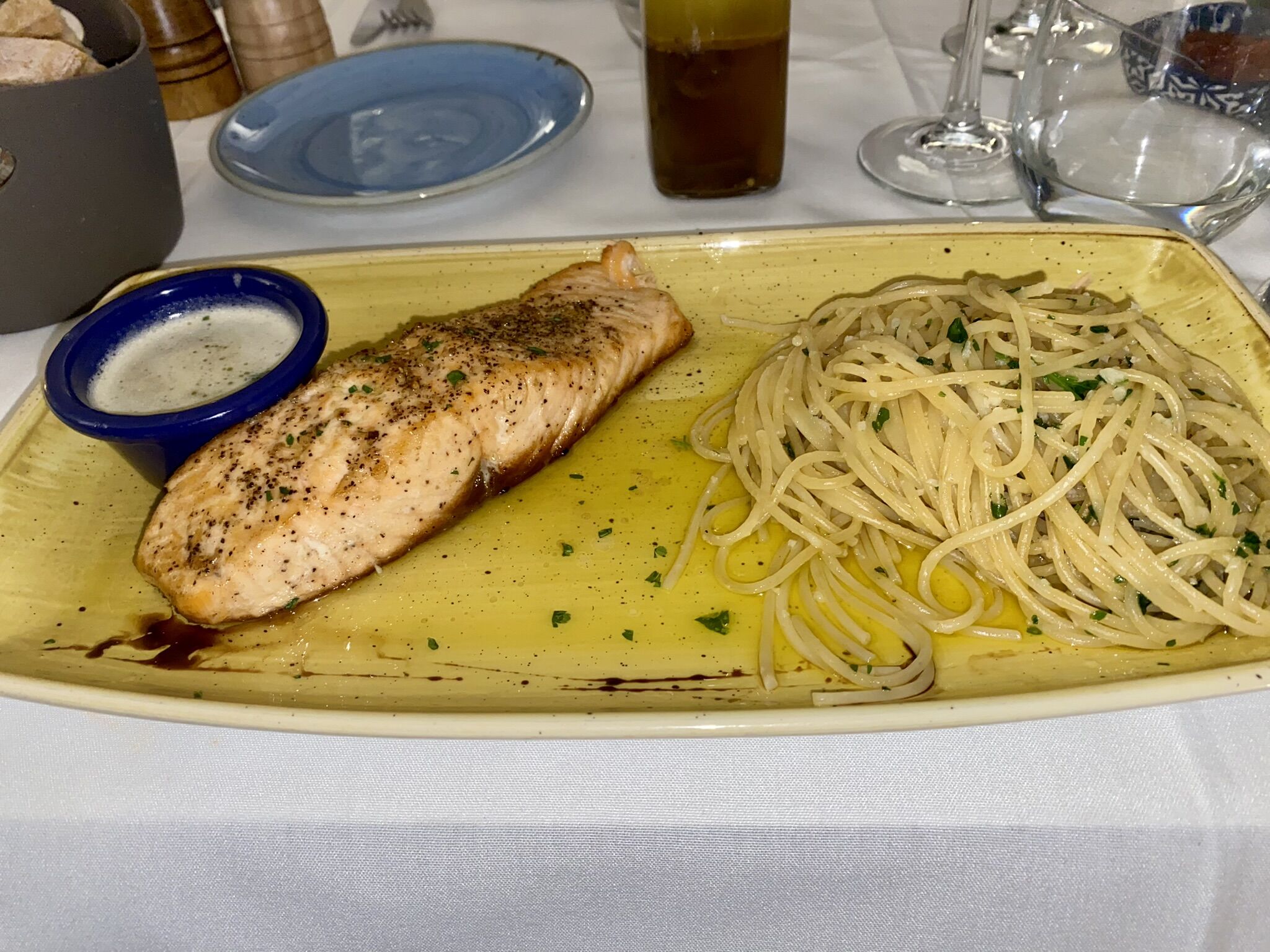 Sicilian pasta and fresh seafood are the staples of this restaurant. The menu can be overwhelming with how many things there are to choose from. I loved the grilled octopus, and for my entree, I ordered the Salmone Napoleone, which is salmon served in a lemon white wine sauce and a side of spaghetti aglio e olio. The meal was very light compared to other dishes I had while visiting and was very tasty. 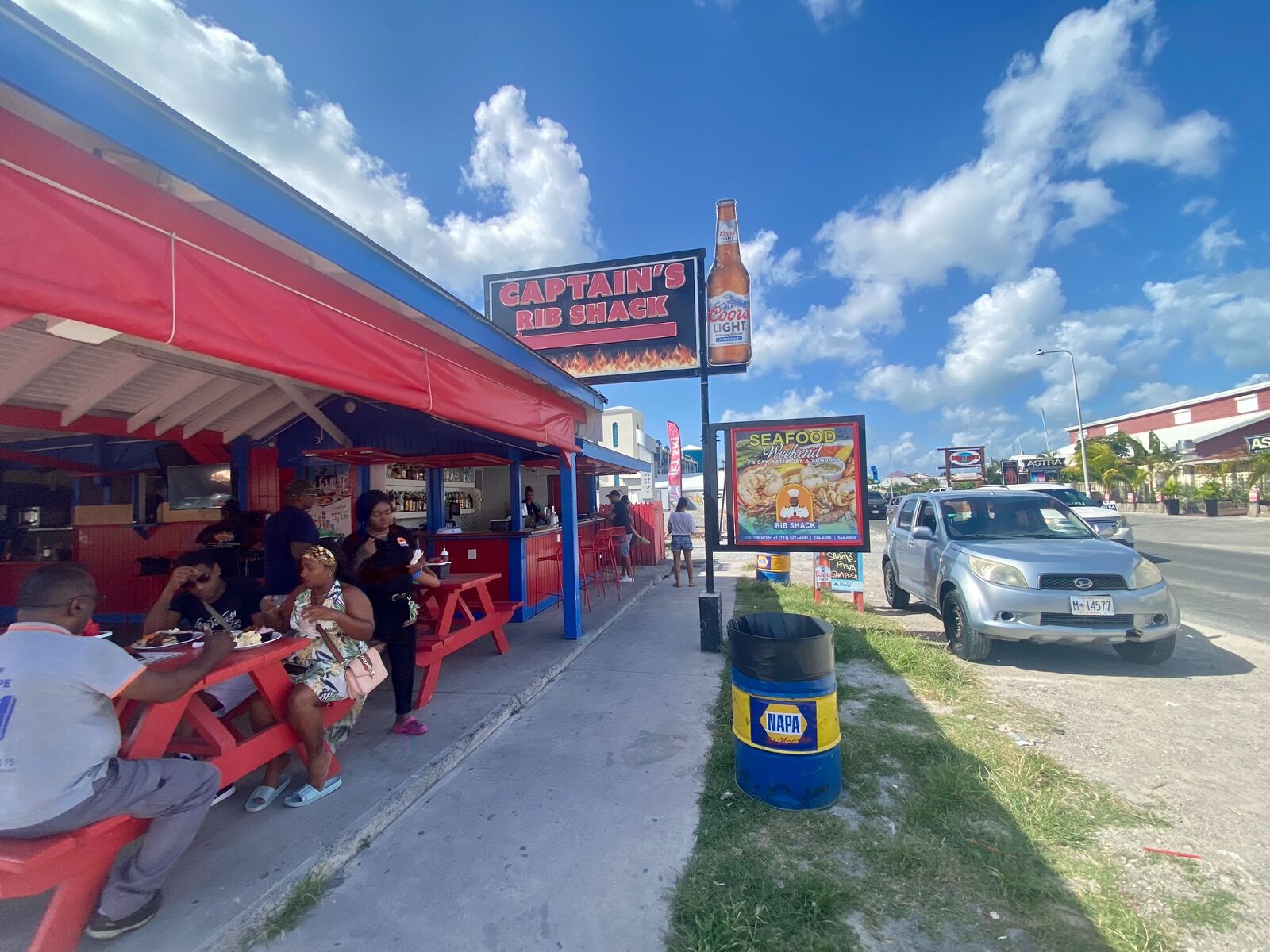 After you visit Sint Maarten, I highly doubt you’ll be ready to leave paradise when it’s time to head home. But get to the airport a few hours early. Not because the lines are out the door long (the airport is tiny), but because once you get your bag is checked, you can leave the airport and make one final stop for barbecue. This Caribbean food staple means there are several places to choose from and locals have strong opinions about who makes the best barbecue on the tiny island. While I had the chance to try a few on my trip, my favorite was The Captain’s Rib Shack. This lolo is only a mile and a half from the airport, so a quick taxi ride will get you there and back before your flight with no problem. 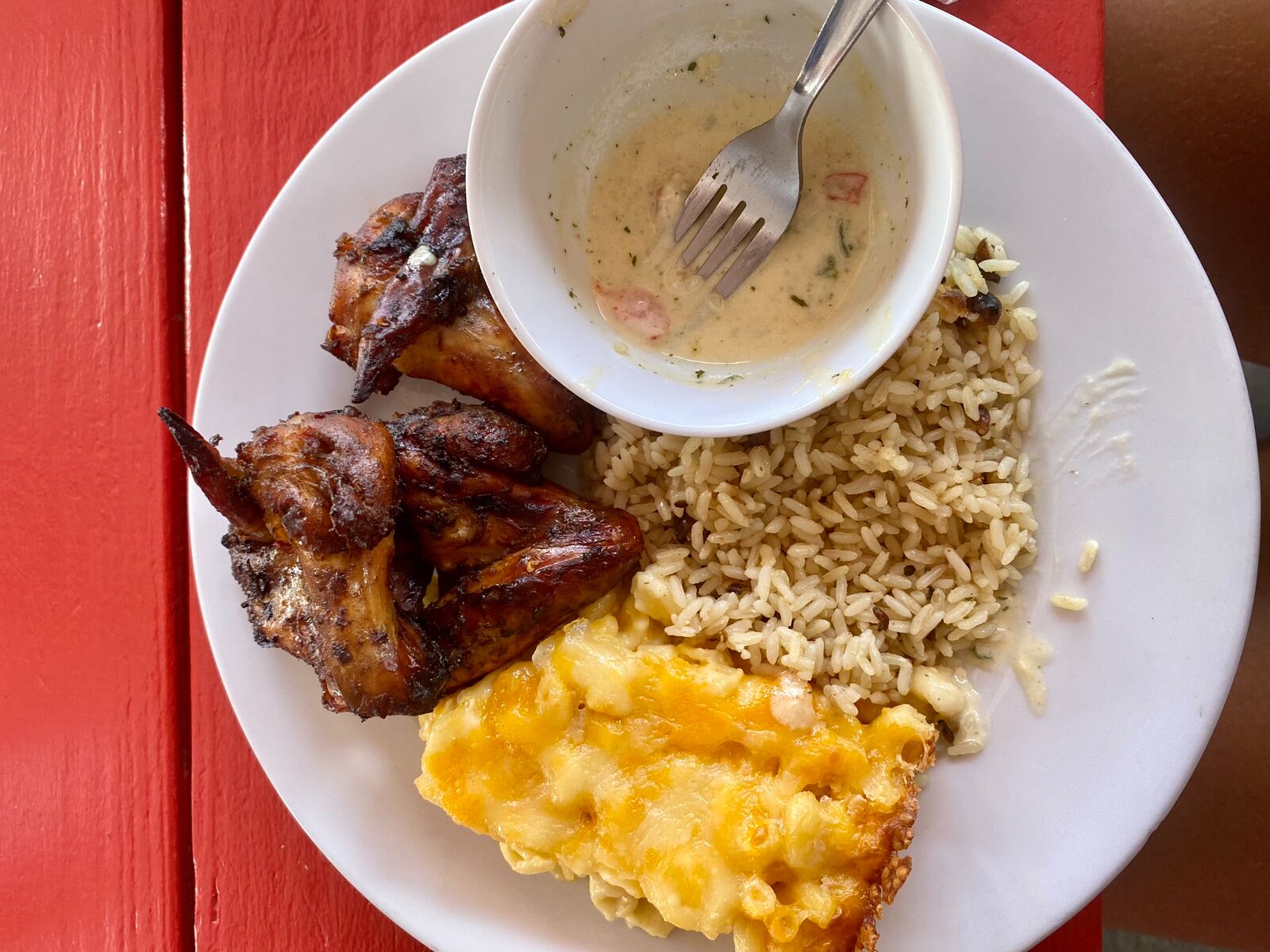 I ordered the barbecue wings, which came with two sides and a small salad. I chose the rice and peas, macaroni and cheese, and I also ordered a Johnny cake. While the lolo is extremely popular, the food doesn’t take too long before it ends up on your plate. This quick detour before I left the island was my favorite meal of the trip. The wings were perfectly cooked and smokey, and the barbecue sauce was excellent. The macaroni and cheese was a standout, baked the way you often see in Black American culture that reminded me of home. A Johnny cake, also known as a journey cake, is a type of savory cornmeal-based flatbread. This Caribbean food was originally created as a portable and easy-to-make fare that could be taken on long journeys, and there are many different styles across the Caribbean. The Johnny cakes at The Captain’s Rib Shack were light and fluffy, making them the perfect way to end my visit.

Travel7 Caribbean Destinations That Will Remind You of Europe
Tagged
Food + Drink
What did you think of this story?
Meh
Good
Awesome

How Climate Change Is Transforming Sint Maarten, a Place I Love