“I go on a lot of vacations where everybody skis but me,” says Dena Owens, a Seattle resident who goes on multiple ski trips every year with family and friends. “It’s crazy that I enjoy it, but I do.”

Whether you have a life partner or a close group of friends who love to ski, you may find yourself invited on a ski trip, or several. If you’re not a skier yourself, you might have visions of whiling the day away alone in an overheated condo and spending nights listening to the skiers in your life recount the adventures they had on the slopes without you.

In fact, the mountains are a great place to be in winter, whether you’re schussing down them or not. We spoke to ski-trippers who don’t ski and got their tips on how to actually enjoy your non-ski ski vacation.

Think of it as me-time. 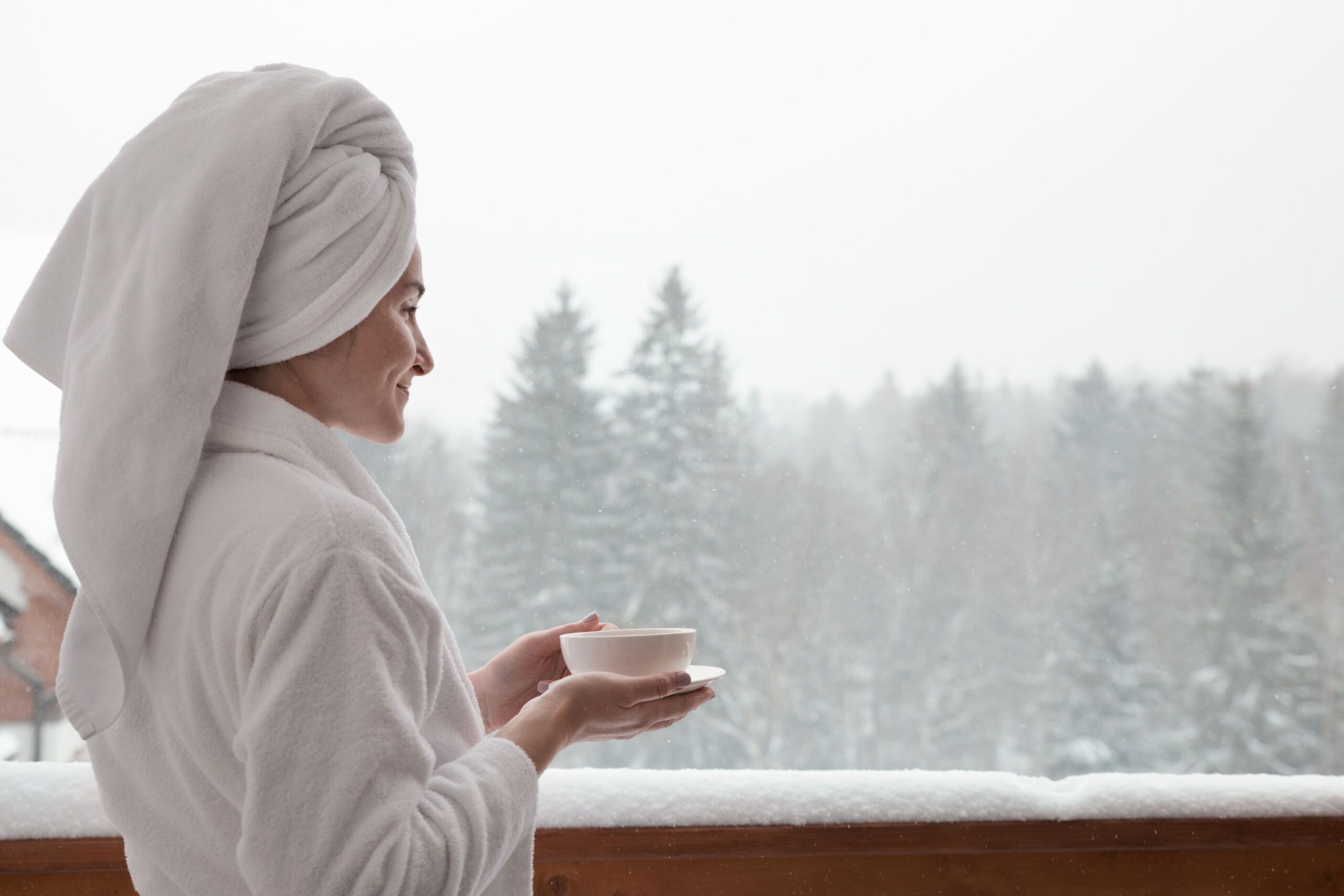 “I think ski vacations are really relaxing,” says Owens. “When everybody leaves the house at nine, I have at least four or five hours alone to hang out, read a book, do a puzzle, which I don’t do at home. At home it’s always laundry, dishes, so it’s relaxing.”

In fact, Owens admits, she’s disappointed when someone gets off the mountain early. Having her husband and three athletic sons out all day is a chance for her to do things she wouldn’t have time for in Seattle — like watching bad TV and knitting, she says.

San Francisco resident Nina Thompson agrees. When she travels with her husband and two kids to stay with friends, all avid skiers who have homes in the Tahoe area, she says she never feels the urge to ski — but takes advantage of a few moments to herself.

“It’s definitely me-time,” says Thompson, who may splurge on a massage or do “little adventures” like take a three-hour drive around Lake Tahoe’s 72-mile circumference.

Get outside and get exercise. 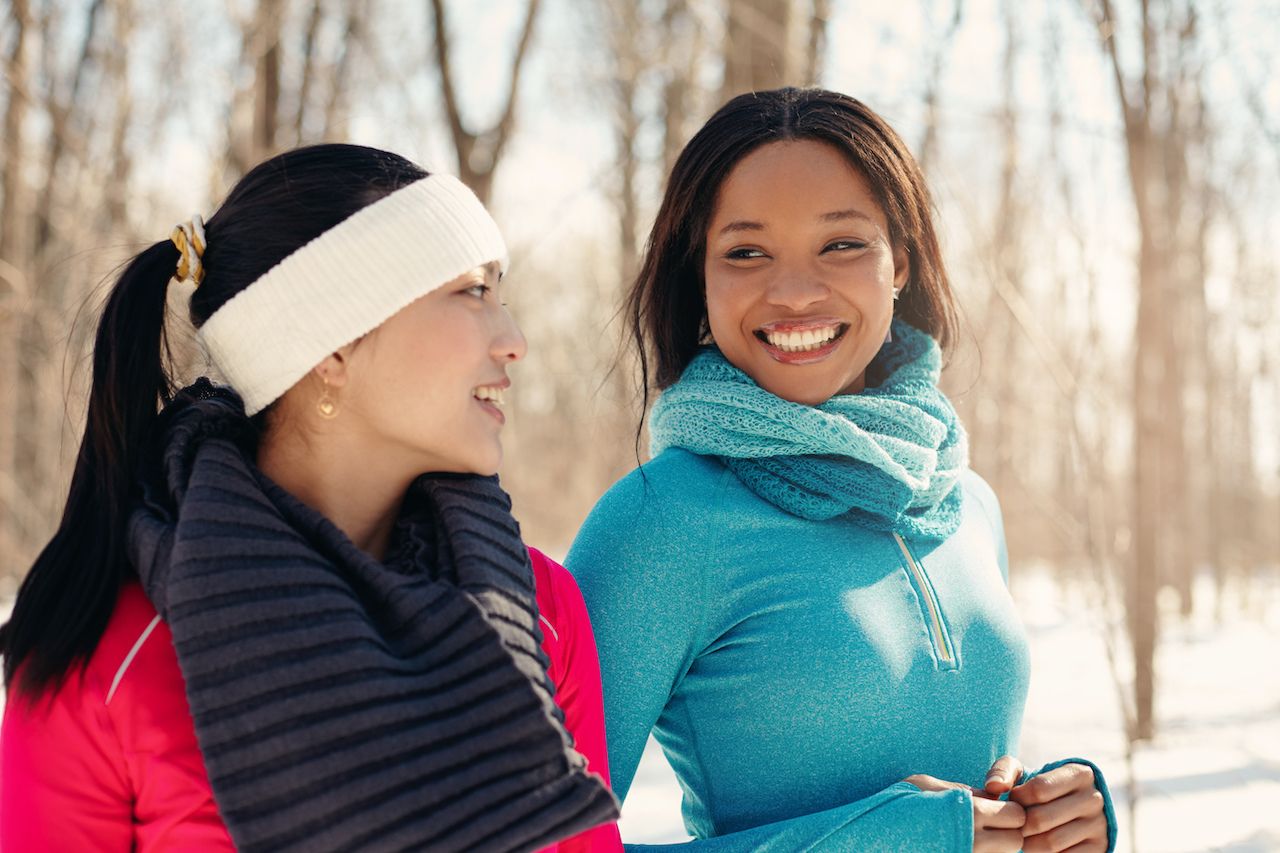 The reality is the mountains are beautiful, and you don’t need to be a skier to appreciate the snow-covered peaks, the forests, and the crisp alpine air. Owens and Thompson both get outside often.

“I like the brightness of the snow,” is one of the first things Owens says about ski vacations. “It’s just a different scenery for me. I think it’s really beautiful.”

Owens says she’ll go for long walks or a snowshoe. When her family skies in Sun Valley, she says the weather generally is true to the resort’s name, so she may go cross-country skiing with other non-downhillers there.

Thompson agrees. She tries to get in a workout outside, just one that doesn’t involve skiing. At Squaw Valley, Thompson does plenty of hikes and enjoys walking around the meadow near the base of the resort. In spring months, when others are skiing, Thompson says she has even paddle boarded on Lake Tahoe, one of the best places on Earth to do so.

Have lunch with the skiers — or without them. 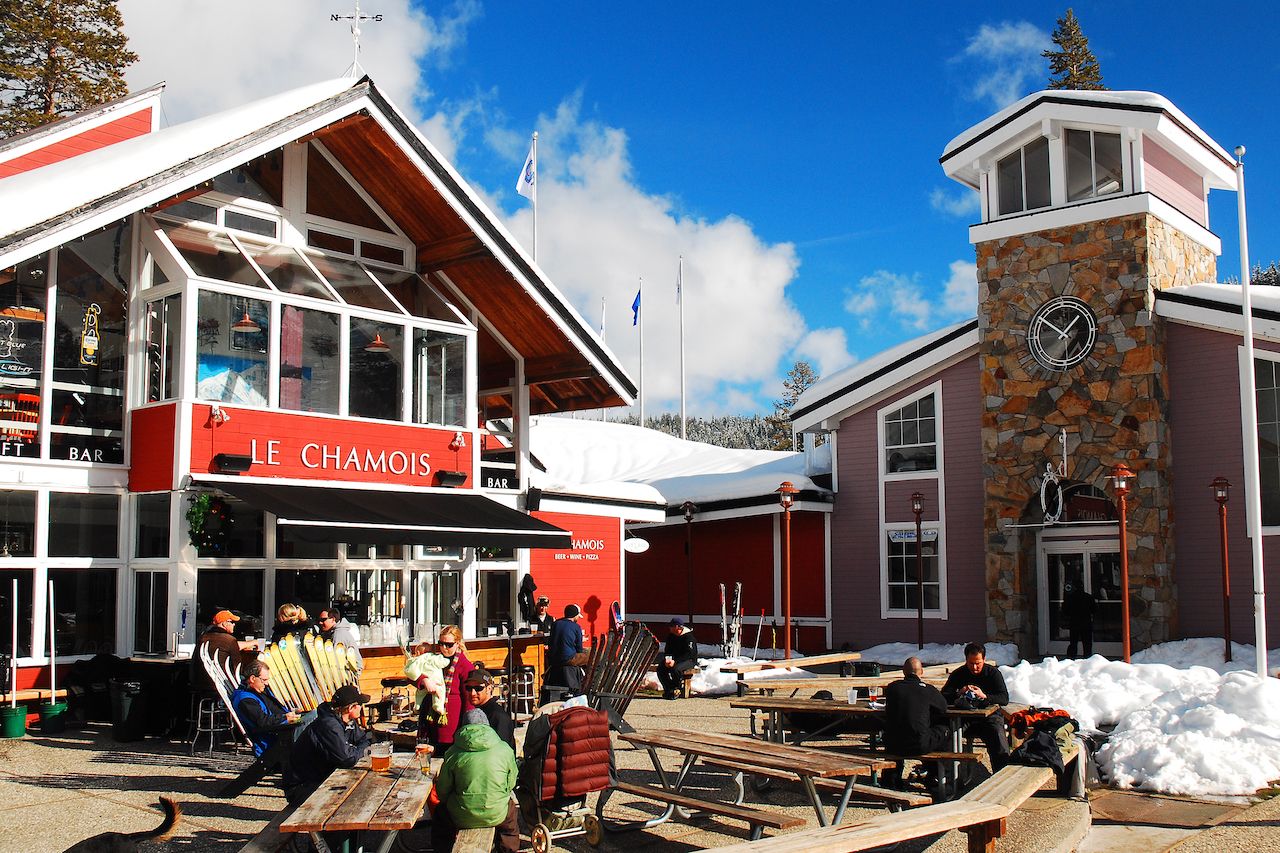 Another way that Thompson gets exercise at Squaw, she says, is by hiking uphill to meet family for lunch. Arguably, though, the food is actually better at the base of Squaw Valley — so there’s no need for a non-skier to hike or pay for a single-use tram ticket since skiers can meet them below.

When the family skis at Squaw Valley’s sister resort, Alpine Meadows, it’s easy enough to ski back to the main lodge to meet her for lunch.

At bigger resorts like Whistler Blackcomb, skiing to the base for lunch may be suboptimal for more experienced skiers, since the blue and black runs are higher up on the mountain. Given the incredible views of the Coast Mountain range and multiple lakes that can be seen from Whistler’s upper lodges, though, all non-skiers should make their way up at least once for the view.

So whether at Whistler or another big mountain, splurge on a one-time gondola ride at least once to take in the vista. And do it at lunchtime, so you can meet your skiing people.

Take advantage of what the resort has to offer. 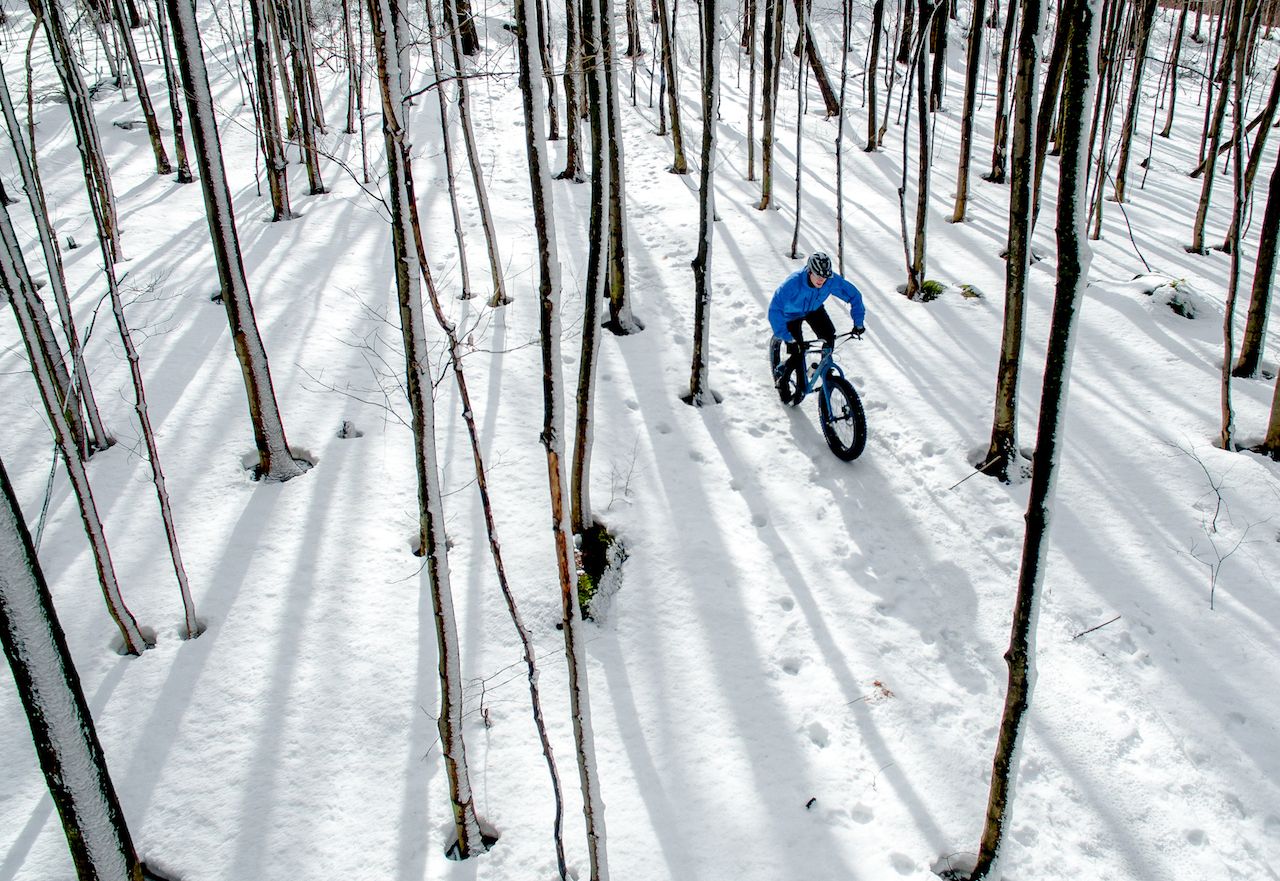 Certainly, some resorts offer more to do for the non-skiing and -board set and have mountain towns tailor-made for them. You don’t have to even look at a chairlift to have an excellent time in Park City, and Aspen is packed with cultural offerings.

These resorts are also ideal places to go shopping, as is Whistler, and Owens says she always walks through Whistler Village and checks out the shops. At smaller resorts, you may prefer to focus on outdoor activities like those we mentioned above — hiking, snowshoeing, cross-country skiing, or even fat biking, which are big-wheeled mountain bikes that you can ride on snow — and get a super workout.

“I definitely would just say explore the village, if there’s a village. See what else is around. Go explore,” recommends Thompson.

You could also go back to Owens’s recommendation of relaxing. In Whistler, Owens also likes to go to the lodge at the base and order a drink and watch the skiers come down the hill.

“In Whistler, I always go to the lodge and sit down and have a cocktail and watch people ski. It’s super fun,” she says. If it’s earlier in the day, she’ll opt for some reading. “I’ll bring a book with me and just sit and drink coffee and watch the slopes. If it’s a sunny day, it’s pretty. It’s entertaining.”

Participate in the ski trip your own way. 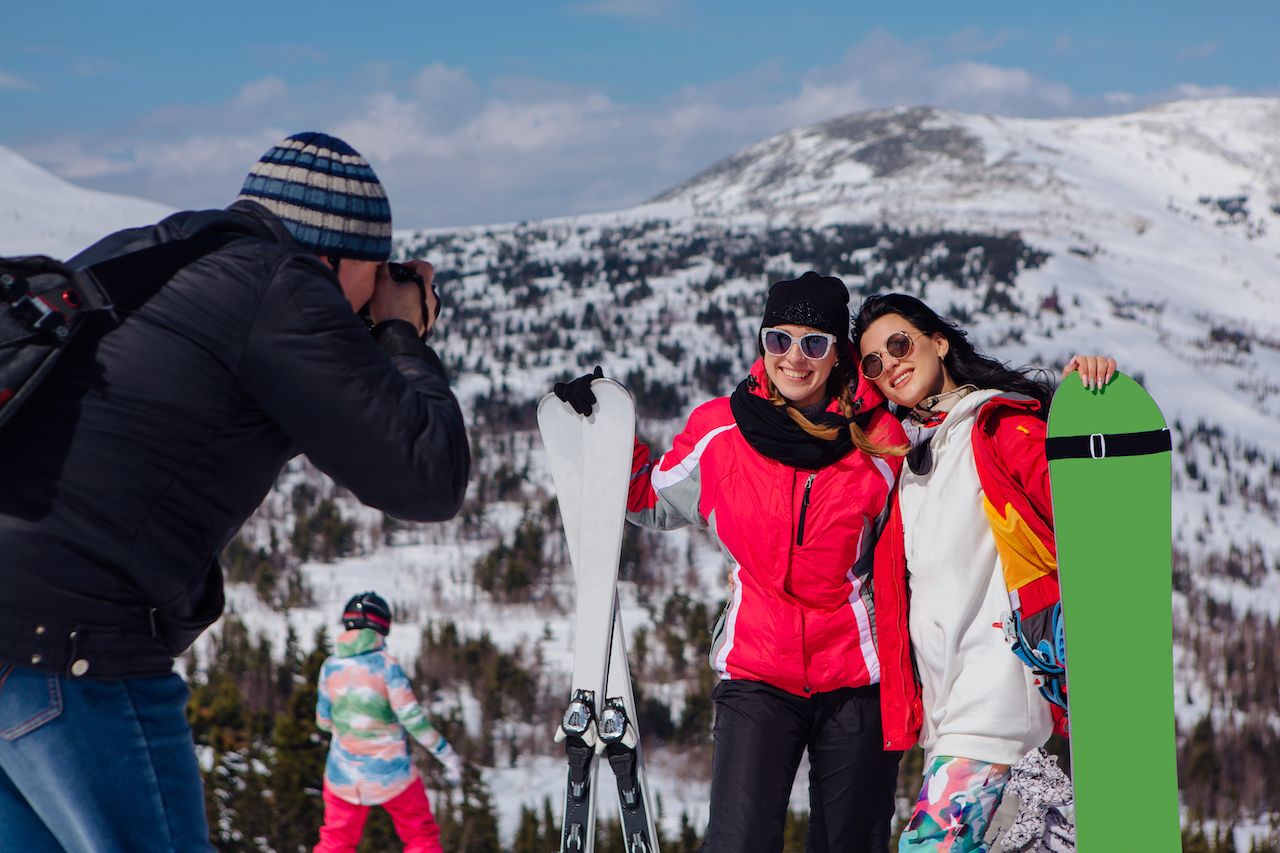 If you don’t want the whole trip to be about alone time, watching the skiers is a social way to be a part of a ski trip. Just as you don’t need to be a photographer to enjoy riding in a jeep on a photo safari, you can appreciate the sport of skiing, even if you choose not to do it yourself.

Owens, whose husband was an expert skier before he met her, says she feels that making sure her kids learned to ski was a lifelong gift, as they’re all now expert skiers themselves. She likes to be helpful by dropping everyone off at the mountain in the morning if the place they’re staying isn’t ski in/ski out. It’s a way to feel part of the process.

If the resort she’s staying at has good markets, as does Whistler, she may spend all day cooking a great meal — something she says she never has the time for at home but loves to do. With three active boys, she said that dinners after a tiring day on the slopes are pleasantly calm compared to at home. 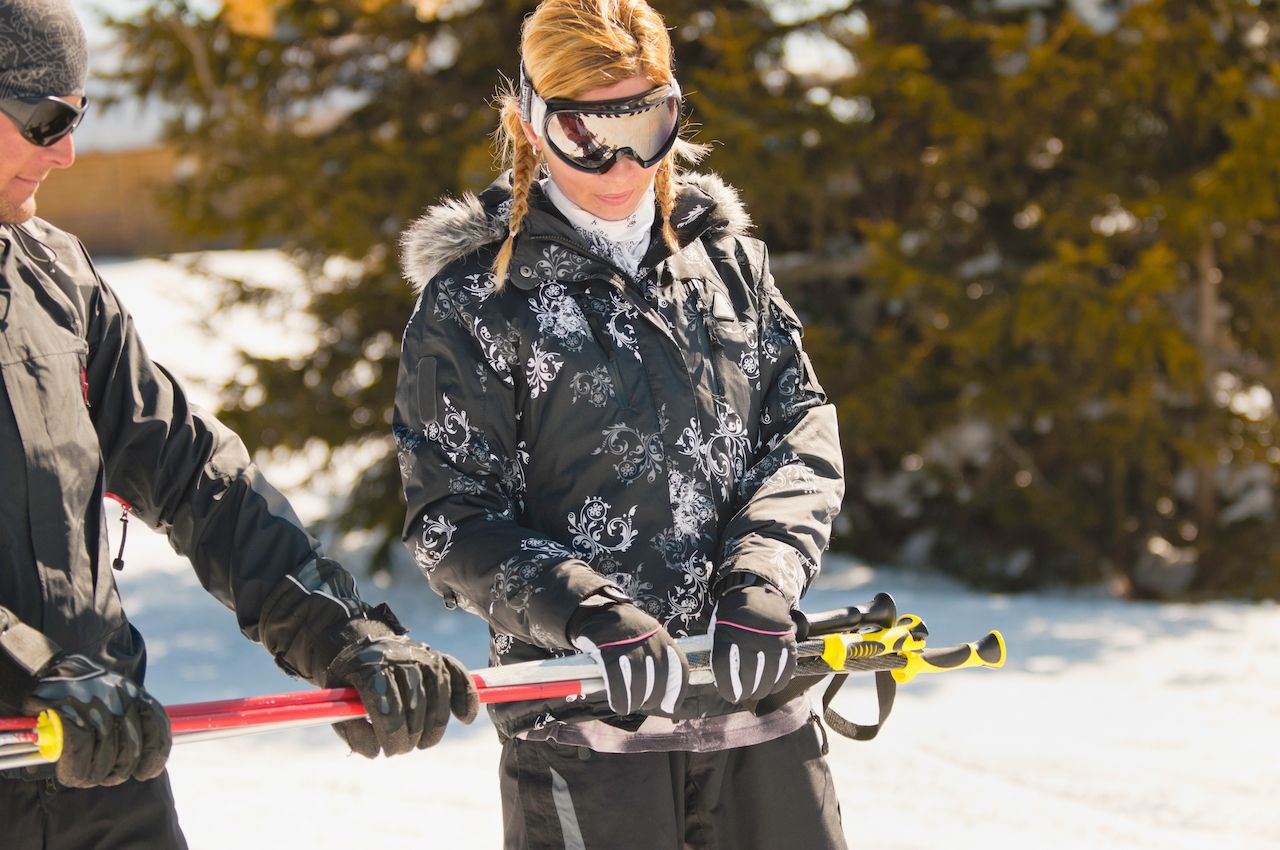 Yes, the whole point here is that you can have fun on a ski trip even when you don’t ski. But you may actually enjoy a lesson with others who are at your level. Thompson, who says that everyone she knows is already a much better skier, meaning skiing with them is not an option, says an hour or two in a group lesson is preferable to skiing solo.

You may then decide it’s something you want to do, and you may find a companion to ski with who is at your level. Or you may not. Taking a lesson is a good way to find out.

Owens says she can ski but would rather spend her time in the mountains doing other things. “I do ski, but I really don’t enjoy it, is what it comes down to,” says Owens.

Remember it’s your vacation as well. 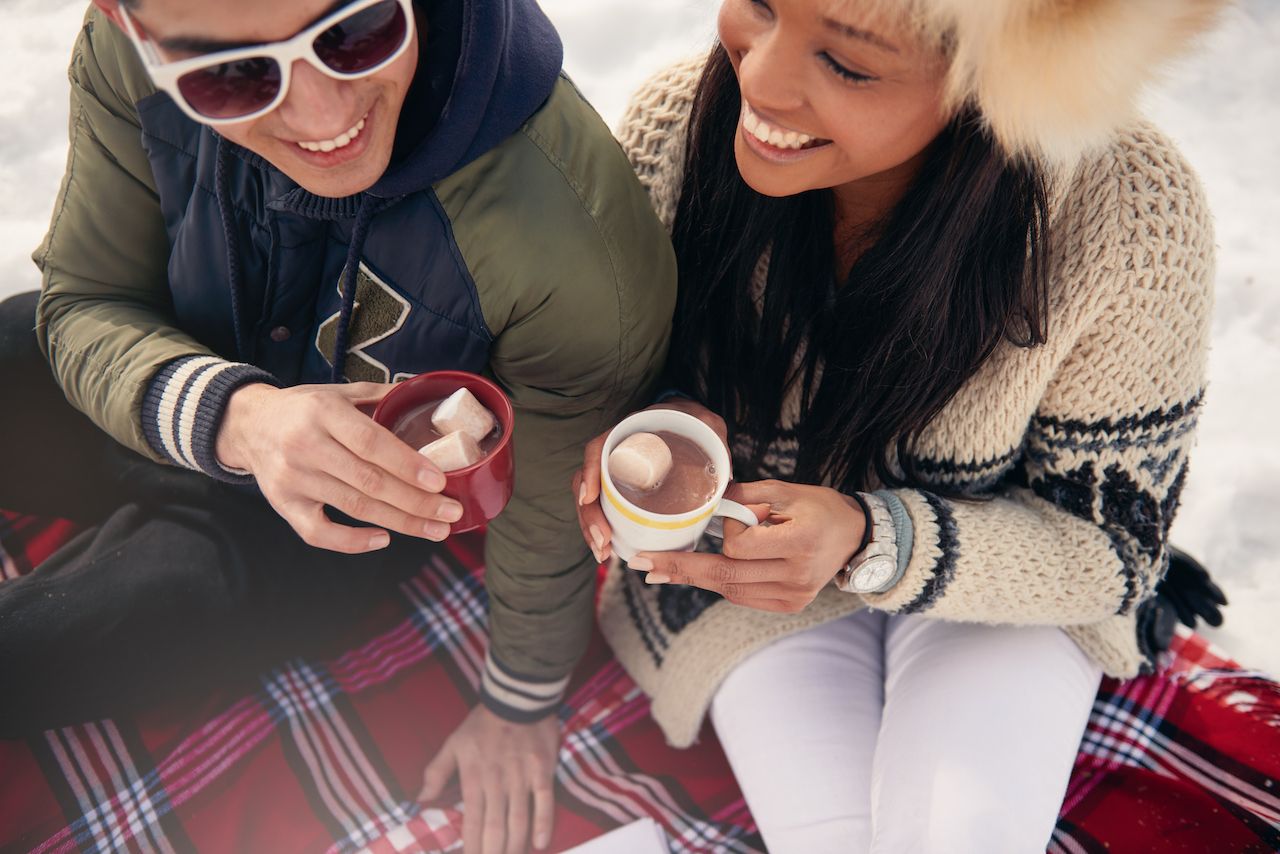 “I didn’t grow up skiing. There’s no romantic thing about it for me,” Thompson, who is originally from the Philippines, says. So she’s happy to enjoy everything else about the mountains in winter, while her husband, kids, and other friends spend the day carving tracks on the hill. She’ll be ready to meet everyone for a post-ski hot chocolate or drinks at the lodge.

“It doesn’t feel like an activity I have to do with them,” says Thompson. “And, you know, it’s cold.”

Skiing is also expensive. Lift tickets, on-mountain meals, and equipment all add up. Add in ski school for little ones and the price climbs even further. If you are the only one in the family not skiing, you are sparing the family those costs. So, if your budget allows, you could splurge a little on yourself.

One way might be to spend the money saved on lift passes on better accommodations. For Owens, since she spends more time at home, the lodging matters.

“Because I don’t ski, that’s a big deal. I’m like, ‘We have to stay somewhere nice,’” says Owens. “Whereas if I did ski, I probably wouldn’t particularly care where we stay.”

And even if your accommodation is more humble, there are always day passes to luxe spas at higher-end resorts and a hot tub with your name on it nearby.