Once they were simple escapes to the snow where you could shell out a little money for a lift ticket, sleep on floors, and eat Power Bars on the chairlift. But as we get older, they become full-on mini vacations. A ski destination now has to have good places to eat. And breweries. And maybe even a spa for a post-ski massage.

Those places exist, but they’re also full of vacation-like prices, with $130-a-day lift tickets that earn you the right to wait in 10-15-minute lines. In cities with booked-up, expensive hotels and overpriced restaurants that still have three-hour waits.

Santa Fe, on the other hand, has none of that — mostly because nobody ever thinks of it as a ski destination. At the southern tip of the Rocky Mountains, you’ll find every bit the first-class ski weekend you’d find in Aspen, Tahoe, or Park City. With prices and crowds that aren’t even close.

No, the skiing, shopping, and luxury here aren’t in abundance the way they are in those A-list ski towns. But for a recreational skier looking for a few days away, it’s perfect. Santa Fe offers an escape that feels entirely different from anywhere you’ve been before, and for a brief few days, it will give you a true feeling of place along with great restaurants and beautiful skiing. 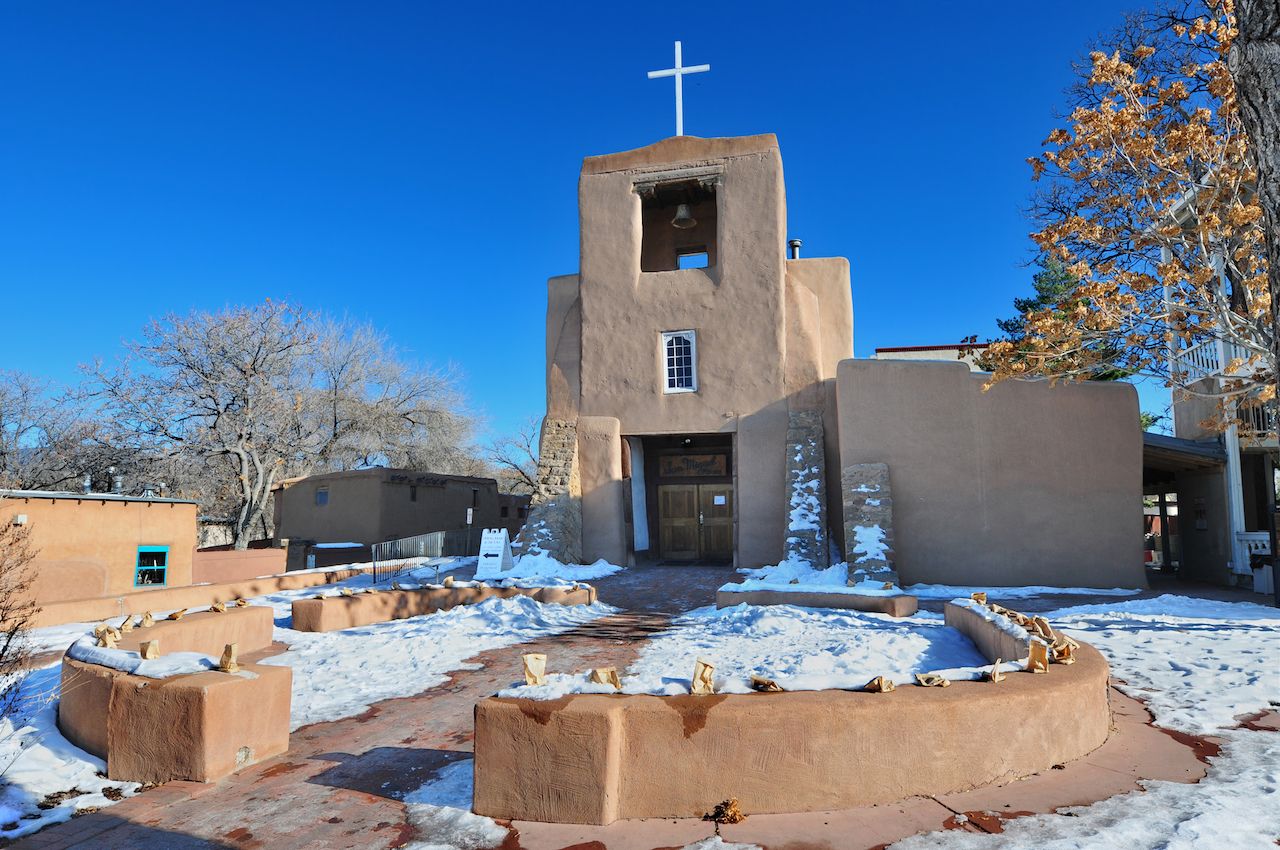 The first thing you notice when rolling into town after an hour’s drive from Albuquerque is that everything in Santa Fe is adobe. From the time New Mexico became a state in 1912, the city began enacting building codes to keep its clay-and-straw motif, giving it that same you-can-only-find-it-here streetscape you’d find in the mansions of Natchez or Art Deco Miami Beach.

Santa Fe is also the second-oldest city in America, and like their neighbors in Texas, they aren’t shy about sharing the accolades. You’ll find yourself wandering out of a pizza shop and happening upon the oldest continuously inhabited house in the nation, a little two-story adobe structure that’s been standing since 1646. Across the street you’ll find the United States’ oldest church at the also-adobe San Miguel Chapel. Downtown’s Palace of the Governors is the oldest continuously used public building in America, dating back to the 1600s. It’s home to the New Mexico History Museum.

The city has also drawn artists in droves since Georgia O’Keeffe and her contemporaries resettled here in the mid-20th century. Taking a Routes Bicycle Tour through the galleries along Canyon Road, you can experience the highlights of the scene in a couple of hours, without ever feeling pressured to shell out 10 grand for a sculpture. The art and history of the city are fascinating, and there’s just enough to knock out on a Friday afternoon before hitting the slopes. 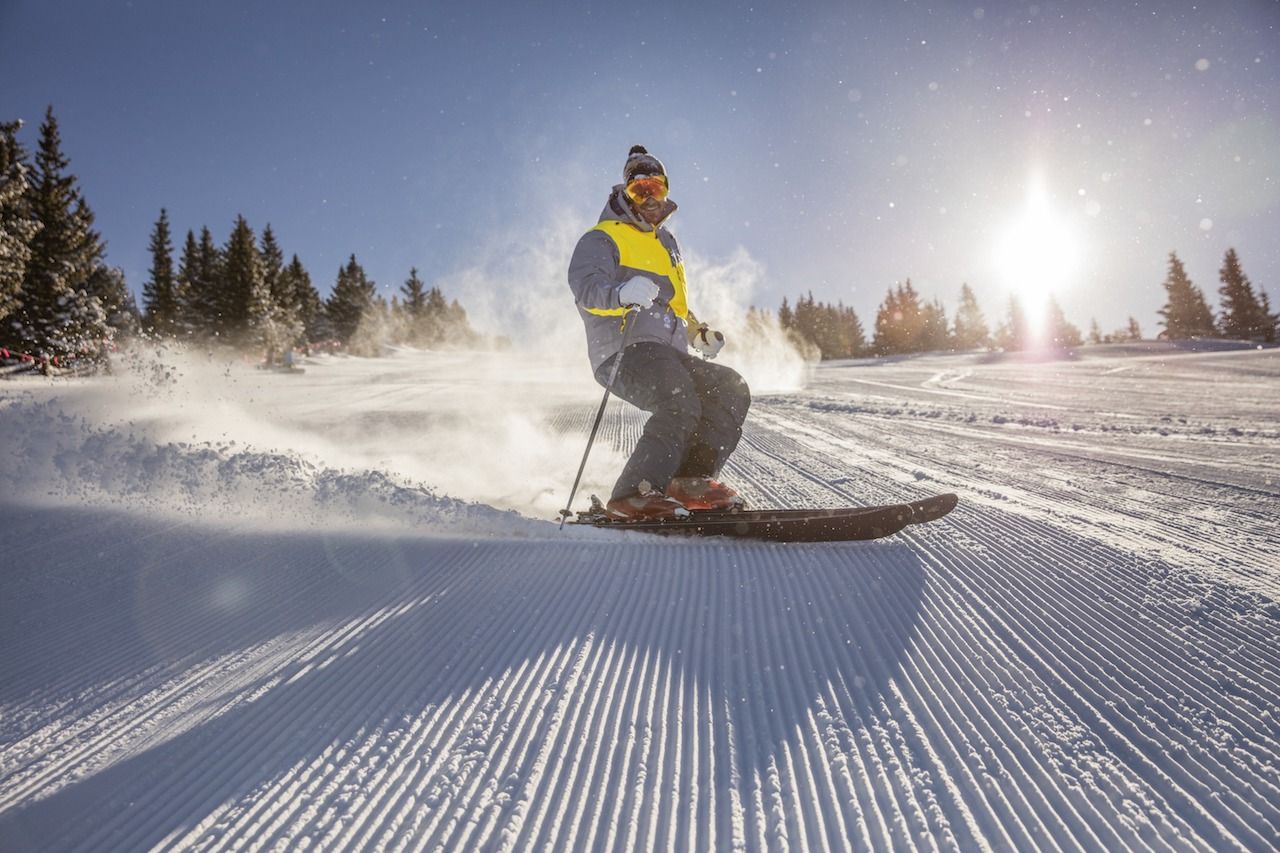 A ski weekend feels most successful when you spend your days expending calories in the fresh air and the nights consuming calories in the most delicious ways possible. With maybe a little luxe pampering in between. Santa Fe does all of those as well as anyone, for surprisingly little money.

About half an hour into the Sangre de Cristo Mountains you’ll encounter Ski Santa Fe, a high-altitude day resort that’s a challenging mix of perfectly groomed wide runs and mogul-filled tree trails. At this 10,000-foot terrain, beginners can feel comfortable challenging themselves without too many people on the mountain, and advanced skiers will have enough technical trails to challenge them for a couple of days.

The altitude makes the mogul-heavy black runs tougher than usual as your legs burn faster with less oxygen available. The narrow paths through trees feel a little like the icy, careening runs in Vermont, minus the sheer ice. And the groomed runs move faster than you’d find in powder-heavy locales like Utah. 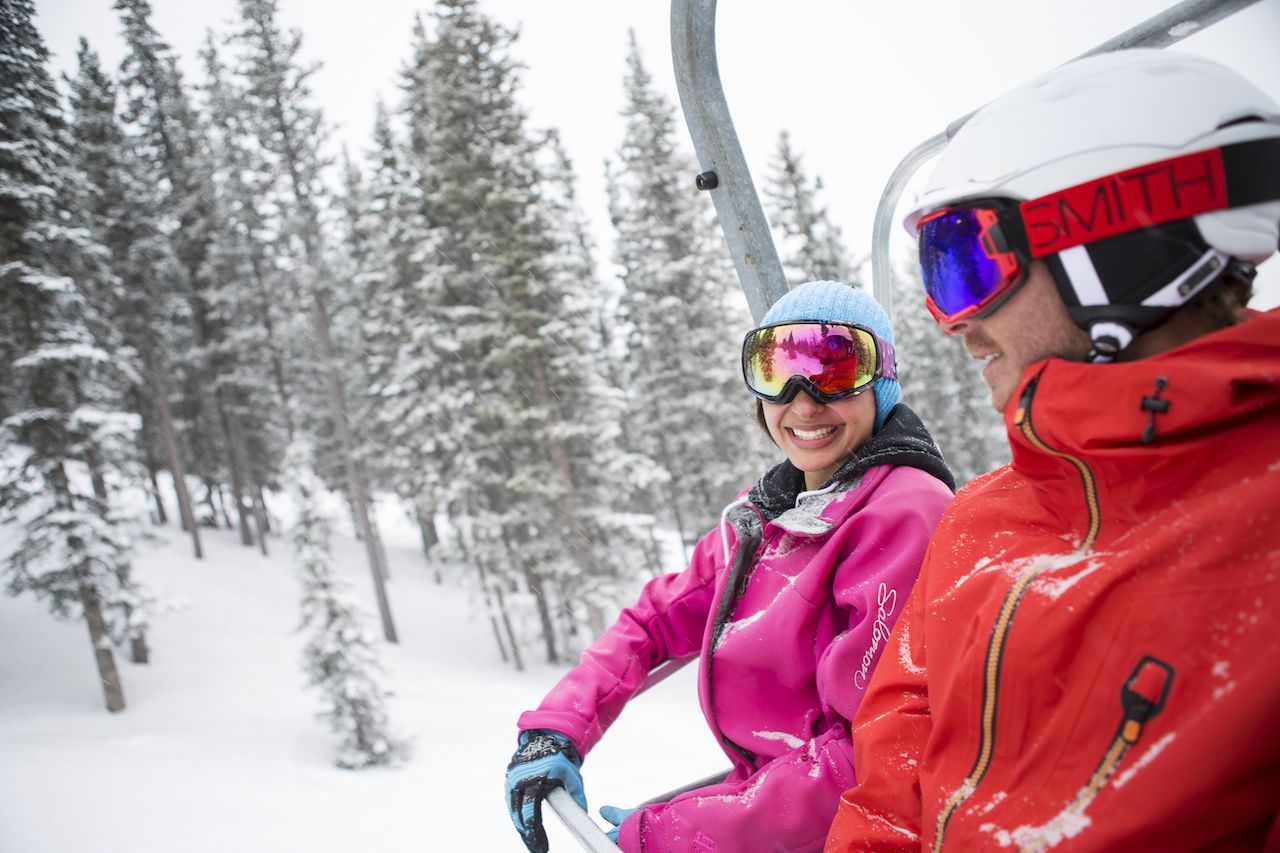 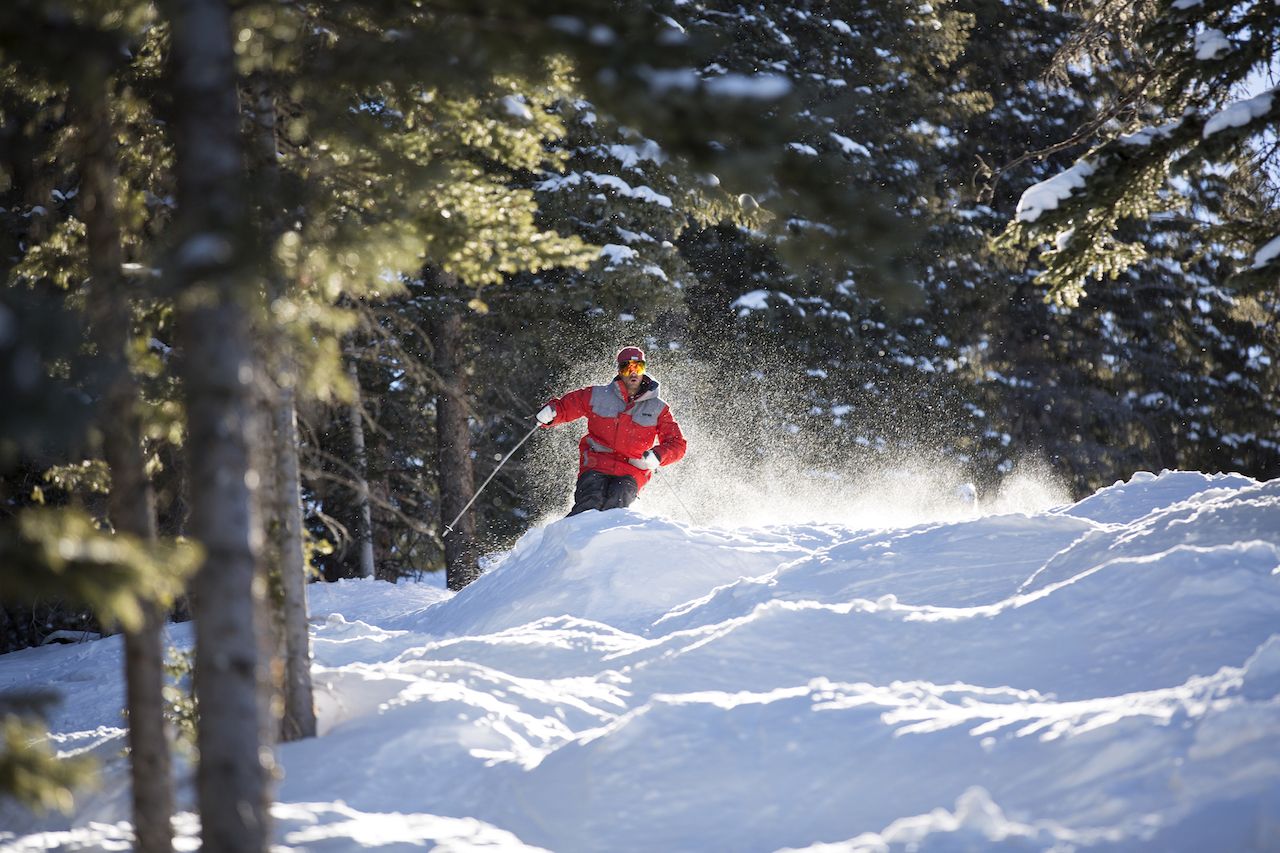 Santa Fe’s anonymity among skiers and its relatively remote location keep the crowds down too. So nervous beginners won’t get intimidated, and advanced skiers can operate with a little more freedom. Prices here won’t kill you either, with lift tickets running $80 a day and no lines at the chairlifts.

The only time you might encounter anything resembling a crowd at Ski Santa Fe is at the on-mountain bar Totemoff’s. On a sunny Saturday afternoon, you’ll hear the resort’s live bands playing Jimmy Buffet covers and smell the grilling burgers before you reach the end of your run. Once finished, you can spend as long as you like relaxing in the sun with a local craft beer, enjoying the music and the sunshine like you’re at a summer picnic on the side of a snowy mountain.

Indulgence of the body, and the palate 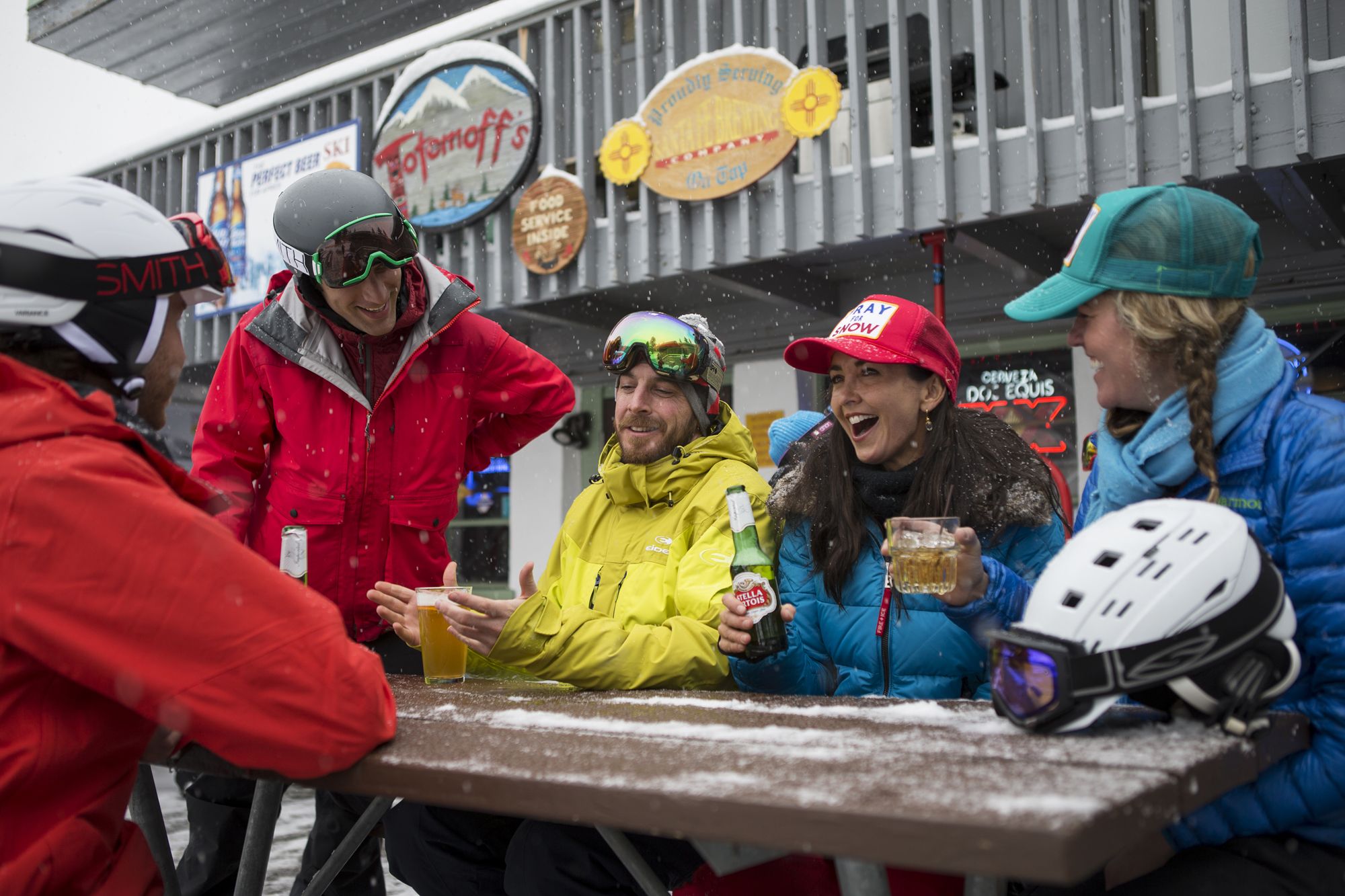 Conveniently located on road back to town is the Ten Thousand Waves spa, a Japanese onsen experience mysteriously dropped on the side of a mountain in New Mexico.

The spa has a sprawling main bathing area where guests in swimming attire wallow in warm waters among bonsai and aspen trees, a mix of vegetation that transports you from New Mexico to the mountains of Honshu. Calming waterfalls, a foot bath, and a grass-mat meditation room create the perfect end to a vigorous day of skiing, simultaneously relaxing and rejuvenating your body for the reasonable entrance fee of $28.

Once back in town you’ll be treated to one of the best small culinary cities in America where you’ll find menus rich in moles, grilled meats, and chili-everything. Most of which will stuff you like a poblano pepper for less than $50 a person.

The city’s most impressive dining experience is at Sazon, Santa Fe’s lone AAA Four Diamond restaurant. Here, chef Fernando Olea presides over his kitchen in jeans and a cowboy hat, making sure stuff like his Cholula — peppers stuffed with lamb, pork, beef, and dried fruits, served with balsamic jalapeno and creamy walnut sauce — is plated exactly in his vision.

During his nine-course Mexican dining adventure, servers place and remove courses like a synchronized drill team, the chef announcing each plate as his head waiter calls cadence. Set among provocative modern art, the restaurant is one of the great dining experiences in America — calling to mind the sort of unique dinner one finds in Madrid or Modena and still talks about decades later. All for a reasonable $150 per person.

If you’re looking for pre- or post-dinner drinks, you might follow Santa Fe’s Margarita Trail. It will take you through some of the city’s more notable restaurants, including the famous La Fonda on the Plaza hotel. This former hangout for nuclear scientists during World War II is steeped in clandestine history, where during the war much of the staff was spies sent to make sure scientists weren’t divulging secrets when they took down a few too many margs. The Soviets sent a number of agents to work the hotel lobby, too, trying to see what America was plotting. 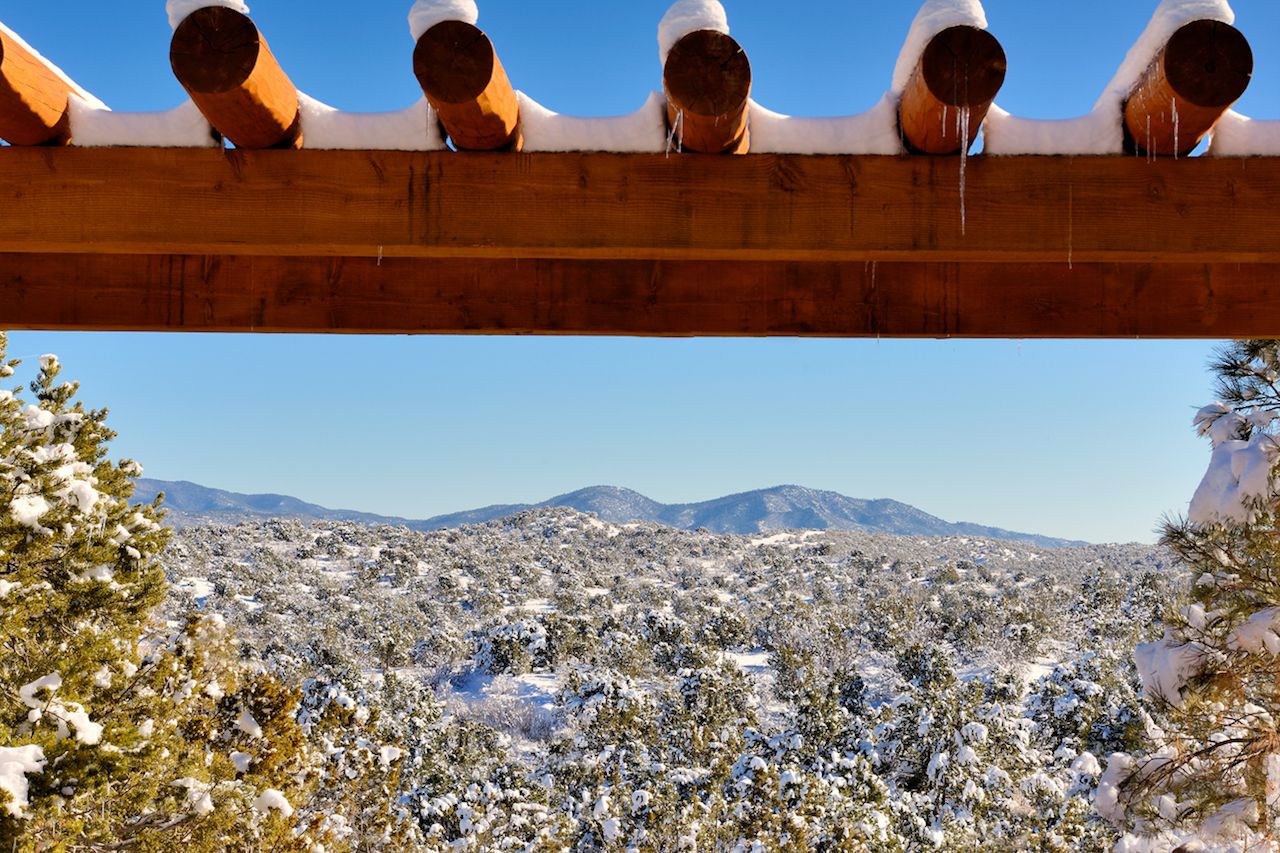 If you’d like to be as close to the margaritas as possible, hotels in Santa Fe aren’t absurdly expensive either. The La Fonda is under $150 a night. The spa-focused Hotel Santa Fe is under $130. And even if you want to splurge, The Four Seasons Rancho Encantado — the luxury jewel of the city on a majestic southwestern ranch just outside of town — is well under $300 a night. Not headline-grabbing bargains, but easily manageable for a weekend.

You won’t find an abundance of choices in Santa Fe, but you’ll find just enough of everything to make for a perfect weekend. The skiing will challenge you enough to be entertained but won’t overwhelm you with choices. The food is as great as you’ll find in huge cities, if you only need to have a few great meals. And the fresh mountain air and relaxation will refresh you before heading on a plane back home. With affordable hotels, food, and recreation, it’s a weekend escape that won’t break your bank. And the perfect place for one last hurrah of winter.