For a born and bred South African like me, seeing snow is a rare occurrence. Chaos ensues on the odd winter day when the heavens decide to grace our countryside with a dusting of white. Every dog and their human companion are out to build a snowman, kids are quickly swaddled in their warmest sweaters, and mountain passes close as traffic grows as thick as sludge. That is why it came as such a shock to me to learn that you can actually ski in Southern Africa.

More than just learning to ski, a week in the mountains of Southern Africa allowed my partner and me to explore Lesotho, a mountainous kingdom engulfed by the country I call my own. We enjoyed an unexpected break from civilization during our winter, the Northern Hemisphere’s summer. Beyond skiing, we were taken in by Lesotho’s rugged beauty and the slow pace of life we experienced in one of its villages. 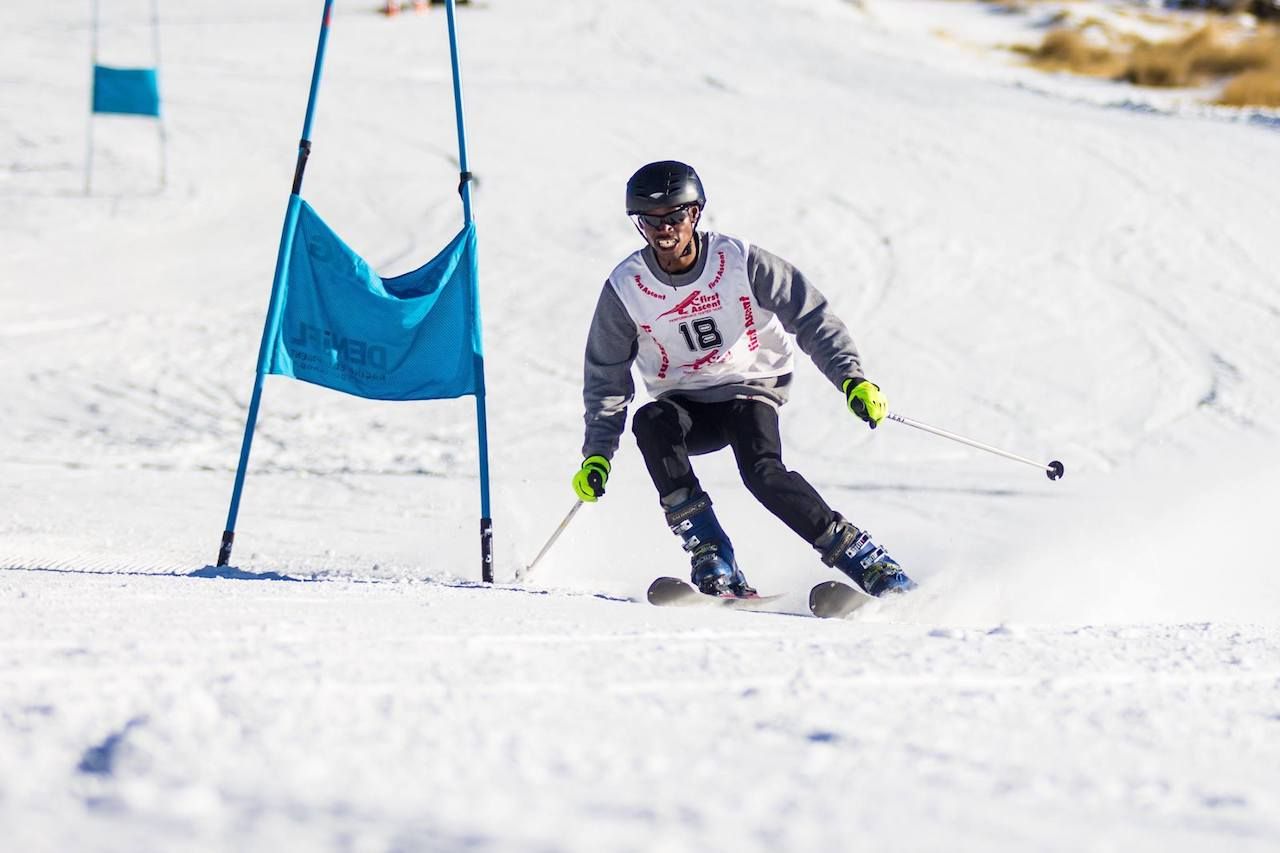 The altitude in Lesotho is extreme, as it is the only country in the world that lies entirely over 1,000 meters (3,280 feet) above sea level. In fact, the lowest point in Lesotho is much higher than that, at 4,600 feet, while its highest point is Mount Ntlenyana, reaching 11,424 feet. Its geography has meant that Lesotho remained independent, although it did depend on British protection through some of its history and today relies on South Africa for employment opportunities and trade.

Lesotho has two mountain ranges: the Drakensberg Mountains along its southern and eastern borders and the Maluti Mountains to the north. While one of Southern Africa’s only two ski resorts lies just south of Lesotho’s national border in the Drakensberg, the other one lies in the Maluti Mountains in the country’s northern reaches. Afriski Mountain Resort was designed to resemble an Alpine town in the heart of Africa’s deep south, with simple chalets, a restaurant and bar, and, amazingly, a ski rental shop and a ski school akin to what you would find in, say, Europe.

However, that is where the comparison ends. This is not the Alps. Although you do get the occasional white-out or gorgeous snowy day, the snow doesn’t coat the mountains all winter long like it does in traditional ski resorts and so is helped along with snow machines much of the winter season, which stretches from the beginning of June to the end of August. On offer for skiers and snowboards are just a handful of slopes catering mainly towards beginners. However, for first-time snow-goers it provides the perfect place to learn and an amazing locale to introduce kids to a snowy winter wonderland.

A perfect place to learn to ski and snowboard 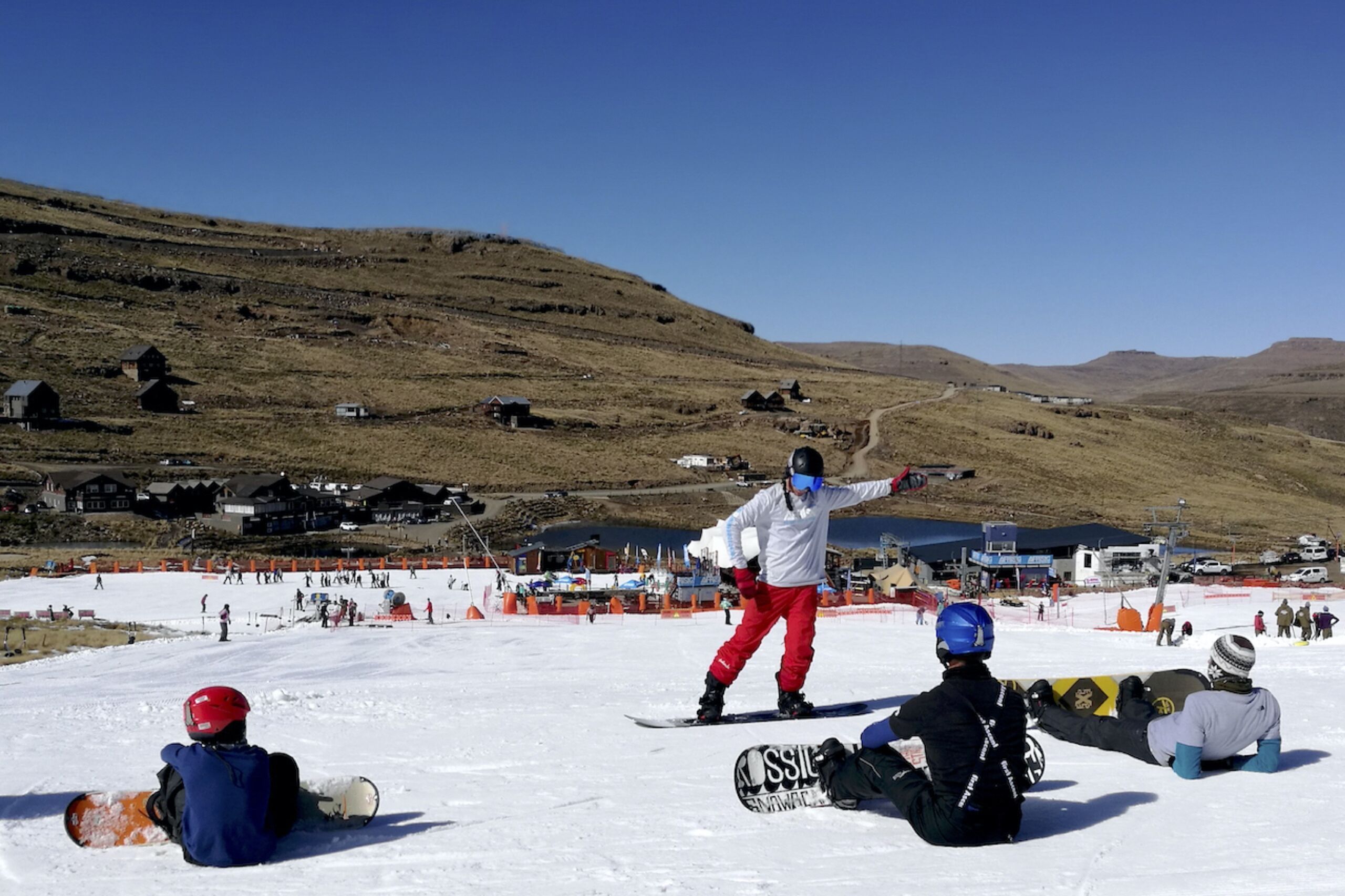 If you’re visiting as a complete newbie to the world of skiing, you won’t be alone. Almost everyone hitting the slopes with you totters and teeters just as much with the newfound feeling of having skis or a board strapped to their feet. Falling is the name of the game, and there is no shame. You also don’t have to stress about holding up the button lift, or palma lift, as everyone is simply relieved to see someone having just as much difficulty as they did.

However, we found the level of instruction we could get in the mountains of Lesotho to be excellent. Instructors had been flown in from France, the US, the UK, and Germany, and in no time at all I was up on my feet and doing it — carving like a pro (or at least an intermediate).

Afriski is also a great place for families to introduce the little ones to the snow, with a kiddies ski school and dedicated area, a fun bumboarding alley, and even a zig-zagged tubing lane. For those who have already mastered some skills, the resort’s very own Kapoko Snow Park has some rails and jumps and boxes. It was amazing to see my shy instructor blasting off some backflips at Africa’s only freestyle snow park. 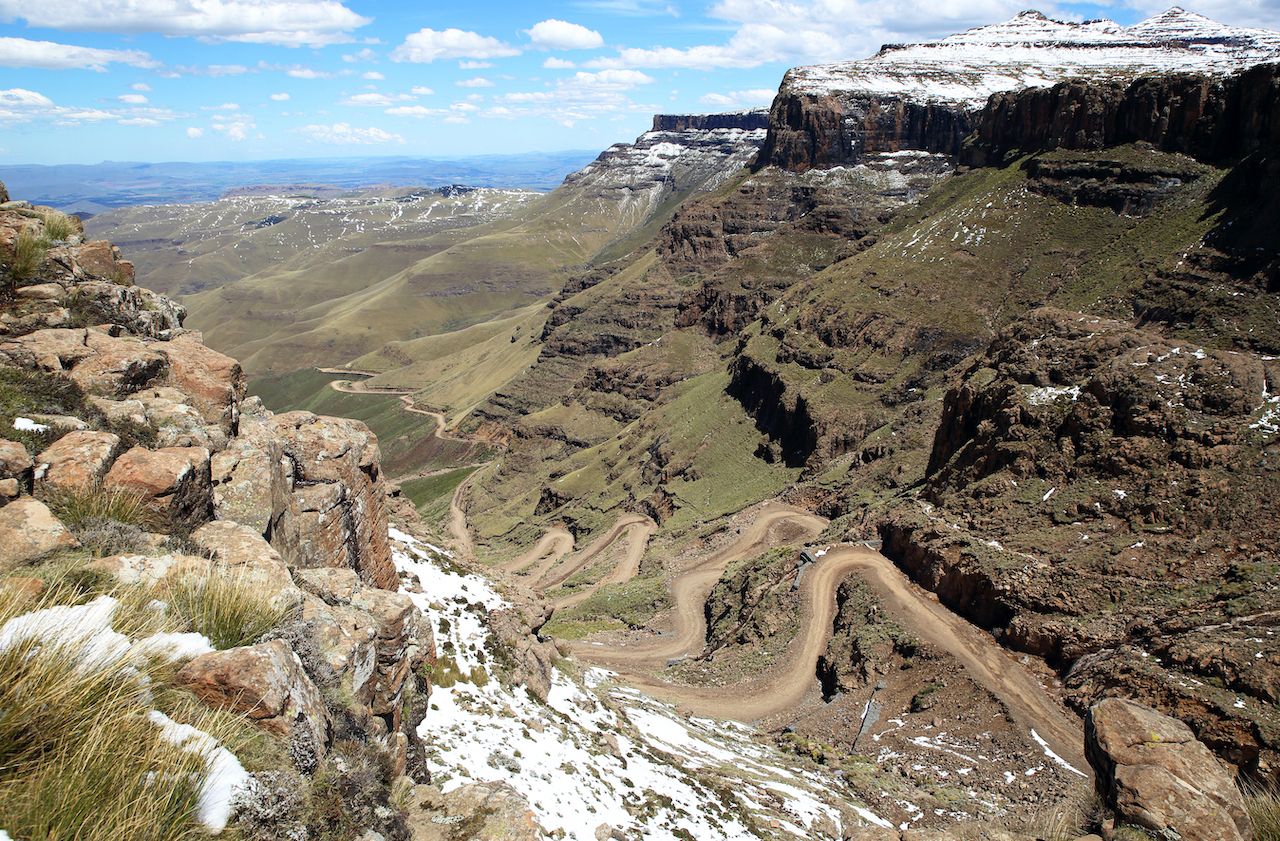 The mountains of Lesotho are dotted with traditional homesteads, and a good tar road runs from north to south through the country, so access is relatively painless. The road to the resort itself climbs higher and higher through mountainside villages dotted with traditional stone huts and crumbling cattle kraals. Sheep, donkeys, and goats cause the occasional roadblock, herded by the blanket-wearing Basotho people, and children play along the roadside, stopping to wave as you pass. Be careful when driving these roads as the cold weather and altitude can cause snowbanks to build up, and ice is also a common occurrence.

If you’re driving from Johannesburg it will take you about five hours to reach Lesotho. From the coastal city of Durban, it takes about four hours to get to the Afriski resort by car. However, you should budget for longer if you plan to do the Sani Pass route, an epic 4×4 trail that is a must-do for any motoring enthusiast, with 139 switchbacks up the side of the Drakensberg range — topping out at an elevation of 10,643 feet — on its way into Lesotho. The pass is being slowly tarred, but around eight miles of it over the high pass itself remains unpaved — so, if you have a sturdy four-wheel-drive vehicle, do this rite of passage before it’s too late.

Either way, the mighty Drakensberg, or Dragon Mountains in Afrikaans, are a sight in their own right. The Zulu word for this escarpment is uKhahlamba, or “barrier of spears,” as the Drakensberg ridges look like a line of pointed weapons. In Sotho, the language of most of Lesotho’s Basotho residents — beyond its Zulu and other minorities — both the Drakensberg and Maluti ranges, which are connected, are called the Maluti.

Other adventures to seek in Lesotho 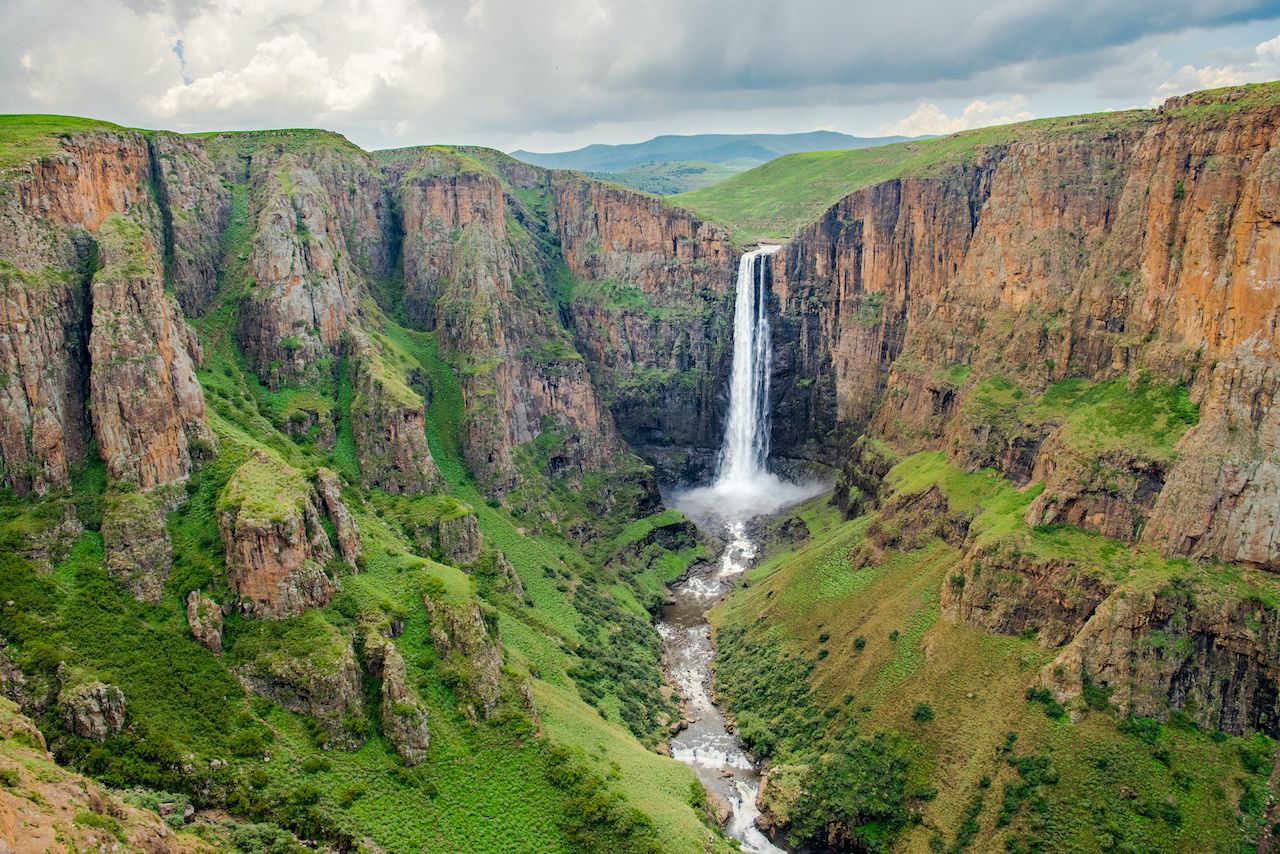 When snow blankets the mountains, you may find diehard snowboarders walking up the mountainside for some off-piste excitement. But if that is not really your thing, or if you can’t time your visit for winter, Lesotho is still teeming with rugged beauty and outdoor adventures.

A 4×4 vehicle is essential for exploring the country as it will take you to its wildest corners. One such stop is at the majestic Maletsunyane Falls, a 630-foot waterfall that is one of the highest single falls in Africa. You can take up to 40 minutes to abseil down alongside the falls, heart in your mouth and the falls’ mist in your hair.

Whatever you think of huge dams, Katse Dam is one of Africa’s largest, and the view of it is quite dramatic. There are also several hiking opportunities throughout the kingdom, such as in Tsehlanyane National Park, with its native forest and rich birdlife; you can hire a guide at the entrance to help you explore some of the park’s 22 square miles.

Afriski itself also offers a whole host of activities to keep visitors entertained in the summer months, including mountain biking and trail running. The resort plays host to a number of epic events throughout the year, and in the warmer months the Kapoko Snow Park noted earlier is reimagined as a bike park. You can also go fly fishing or take a monster roller scooter out for a spin. 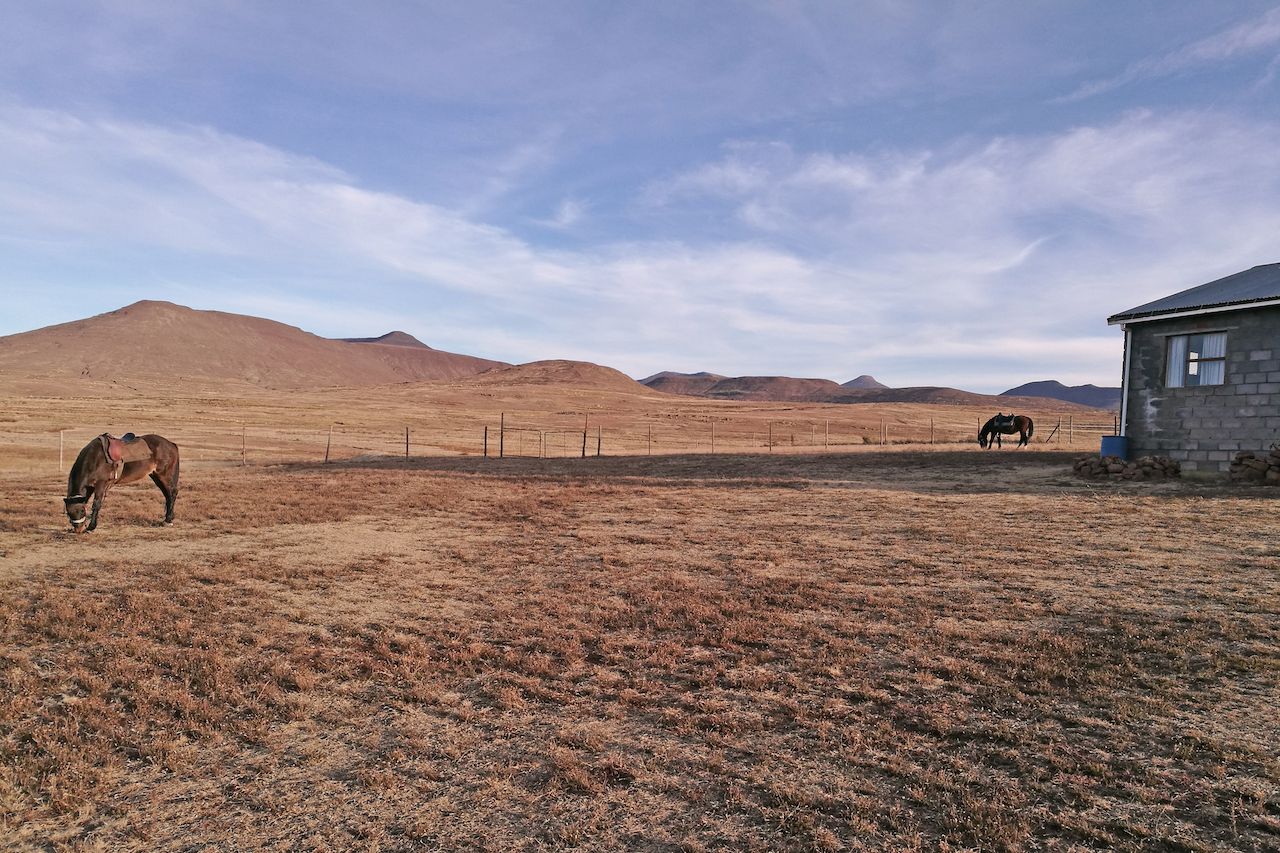 After our week in the snow at Afriski, we weren’t yet ready to leave Lesotho, opting instead to search for another adventure in the Lesotho Highlands. Veering off the main road that leads back down the Drakensberg and into South Africa, we ventured farther into the heart of this tiny country. Passing traditional mountainside cattle enclosures called kraals, thatch huts billowing smoke, old mission stations, and some roadside icicles bigger than ourselves, we finally arrived, dusty but excited, at our destination. Located right at the entrance to a local village, Polihali Lodge would provide a unique stop for one more night in Lesotho.

The owners of this property offer pony treks into the mountains of Lesotho. (The local Basuto pony breed is actually a small horse, so you’ll find they call them both ponies and horses.) You can choose from shorter outrides or one-day adventures to full-on multi-day trails in the mountains, overnighting in traditional shepherd huts. There are no bells and whistles here, just a downright relaxed and authentic Lesotho experience.

Plodding along on our hardened Lesotho steeds through fields, we were able to drink in the absolute beauty of this country. Although easily reachable from Johannesburg and Durban, time in Lesotho is a seemingly meaningless thing. The mountains, barren in the winter but beautiful, stretched to the horizon, no high rises or modern structures blocking the view. There was not even any cell-phone signal to speak of, just endless, crisp, and inviting silence — save for the farmers calling out to their flock and the high-pitched laughter of some children as they played in the village stream down below.

Following our guide, our horses carefully made their way down the mountain and into the village, which would be our home for the night. Mothers tended to their washing in the river while the boys rounded up the sheep and cows before darkness set in. We dodged chickens and the odd soccer ball as the pink hue of twilight swept over Lesotho. Returning to our room at Polihali we sat out on the stoop, like an old couple in the days of yesteryear, and watched as the evening soccer match drew everyone out of the village for some friendly rivalry on the pitch. The smells of cooking wafted in from the kitchen, and a hearty meal of spicy chicken, pap (maize porridge), and veggies provided the perfect end to our time in Lesotho.

It was with a sense of sadness as we packed up our trusty Land Rover the next day to make the journey out of the mountain kingdom. And as our passports were stamped as we crossed back into South Africa, we had to take a moment to stop and look back over those undulating hills. For here, nestled within our very own homeland, was a totally different world and a tiny gem of a country waiting with open arms for anyone who hopes to explore it.

Trip PlanningWhy Lesotho Should Be on Every Mountaineer’s Radar
Tagged
National Parks Ski & Snow Lesotho
What did you think of this story?
Meh
Good
Awesome

Why Lesotho Should Be on Every Mountaineer's Radar

Six Gift Ideas That Give Back This Holiday Season