Surrounded by South Africa and just a short hop from Johannesburg sits Lesotho, a kingdom fit for mountaineering royalty. It’s one of only three enclaved “countries within a country” in the world, which means that epic mountains basically surround this beautiful nation. Whether you climb to the top of these peaks or play at the foot of them, this awe-inspiring landscape welcomes challengers by foot, ski, boat, 4×4, and even pony. With nicknames like the “Kingdom of the Sky” and the “Switzerland of Africa,” you know you’re entering the perfect playground for all manners of outdoor activities. Rise to the challenge and discover why Lesotho should be on every mountaineer’s radar.

The are plenty of peaks to bag. 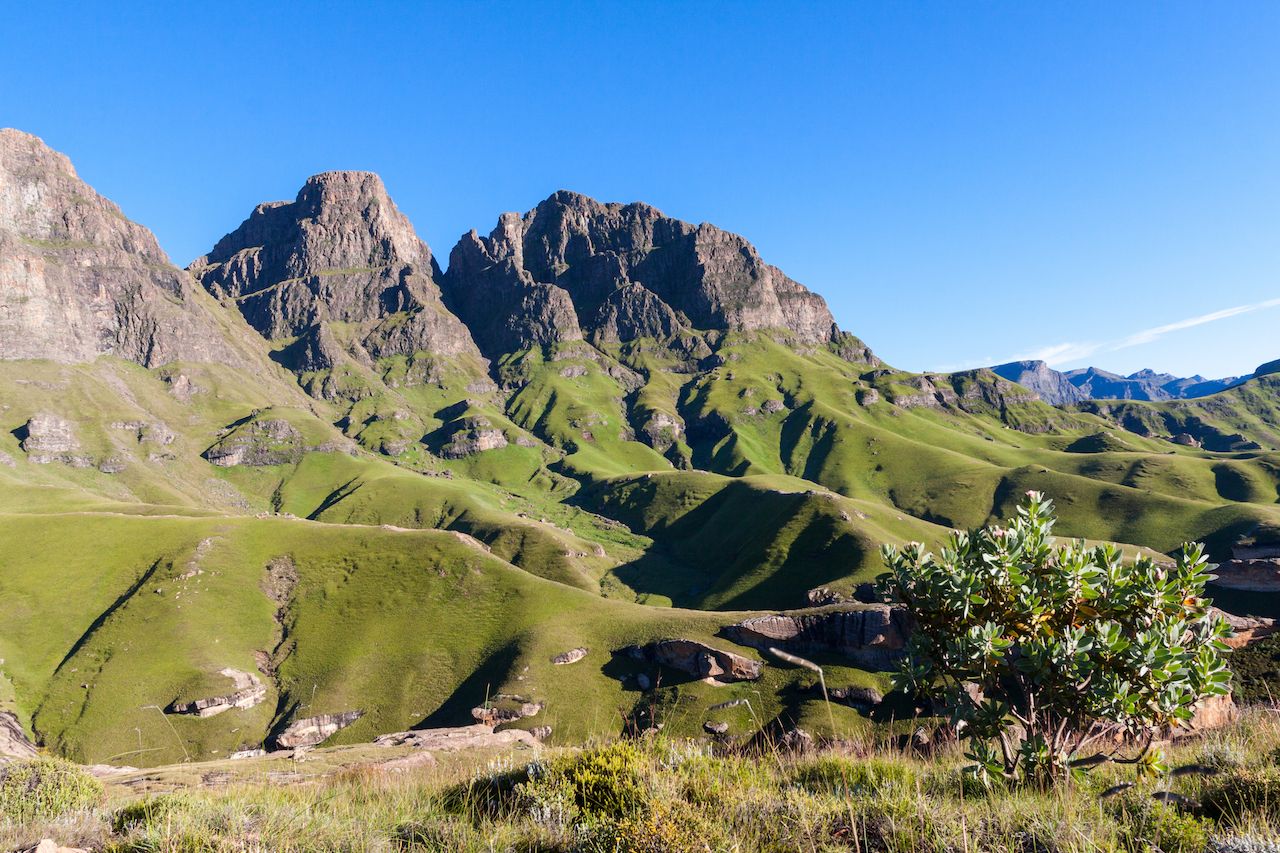 Lesotho is the only independent state in the world situated entirely above 1,000 meters (3,281 feet) in elevation. It’s rugged and varied landscapes — riddled with lakes, rivers, and waterfalls — rise and drop away, giving hikers a vast expanse of scenic beauty to explore on foot. You’ll find lengthier trails in spots like Sehlabathebe National Park or Bokong Nature Reserve, but the Giant’s Cup trail from the Sani Pass Lodge to Bushman’s Nek makes for a more accessible trip. If you’re up for a challenge, continue this climb to Thabana Ntlenyana, the highest mountain in all of southern Africa at 3,482 meters (11,424 feet). Much like rural areas of New Zealand, however, hiking in Lesotho doesn’t always come with clearly marked trails. Instead, winding footpaths criss-cross over much of the fenceless terrain. You’re free to bush-camp as long as you ask permission from locals.

You can shred the gnar by ski or snowboard. 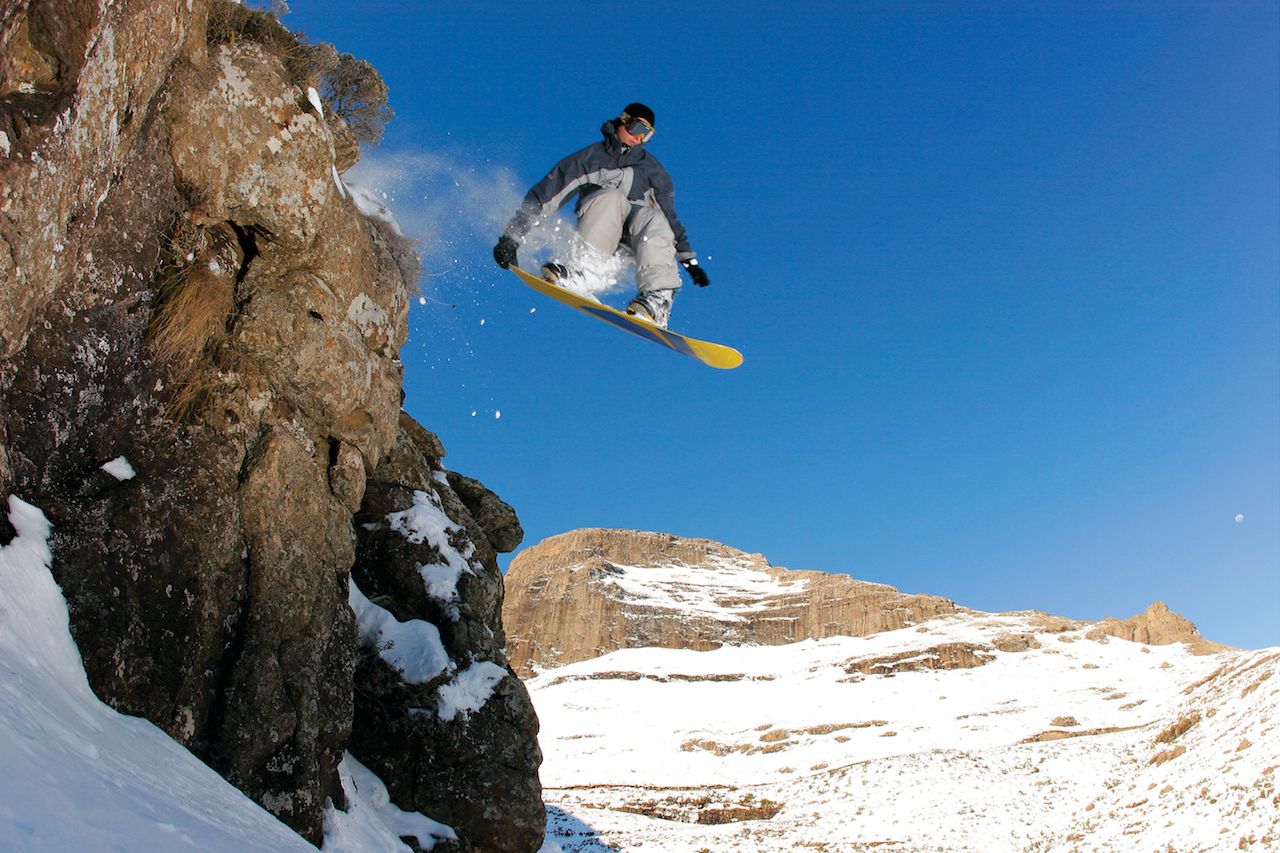 Skiing and snowboarding in Africa? That’s right. You’ve seen the Lion King a hundred times, but not everything the light touches is a flat savannah. Temperatures drop to well below freezing in the high-altitude peaks of the Maluti Mountains during winter months (June-August). In this northern range you’ll find Afriski, the only ski resort operating in Lesotho and one of only a handful on the entire African continent. It’s only a 4.5-hour drive from Johannesburg, so you’ve got easy access to fluffy fresh powder for shredding. The resort stays open year-round to let visitors explore the beautiful Oxbow region, though skiing only happens in winter months. 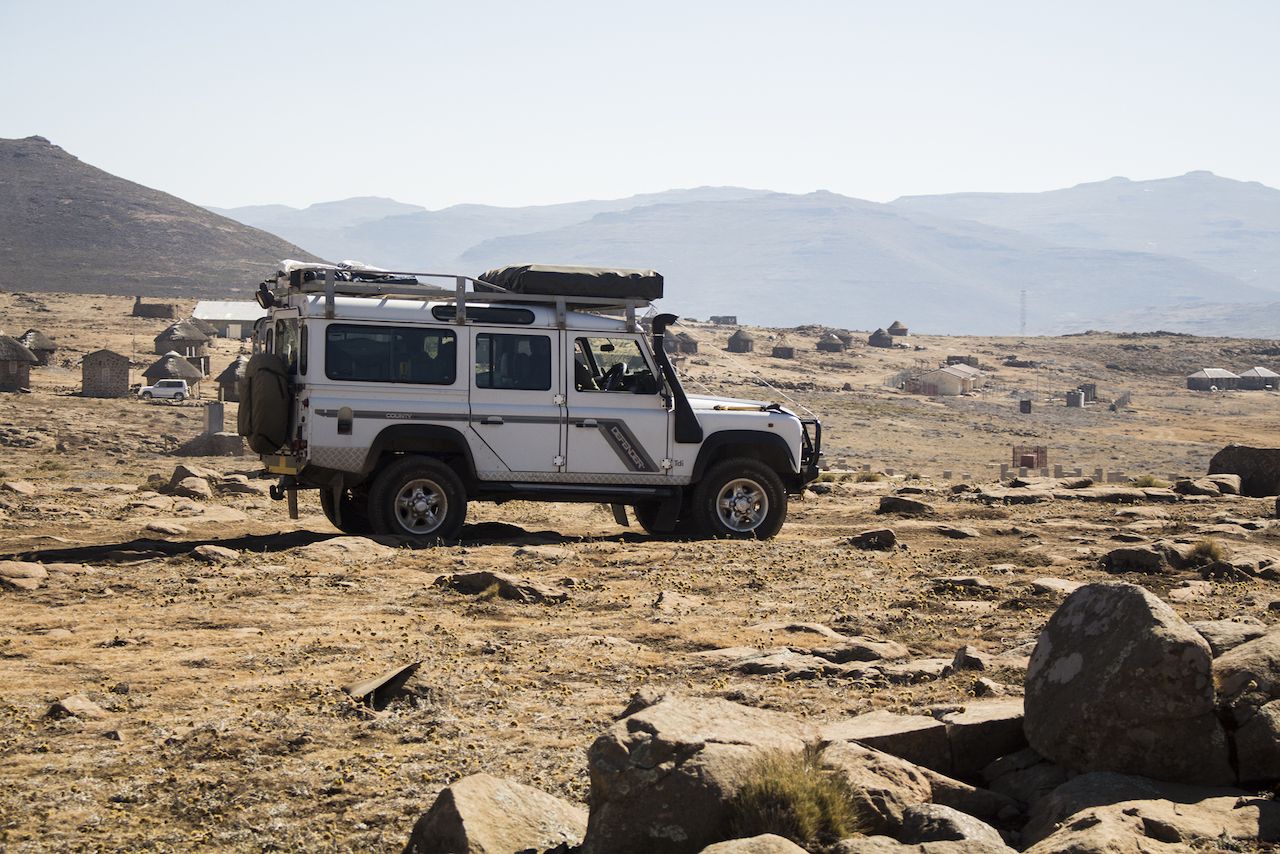 In 1967, a Roads Engineer by the name of Bob Phillips asked the Sports Car Club in Johannesburg if it wanted to run a race in Lesotho on the worst road in the world. He had just finished constructing it and was looking to bring attention to the alluring yet challenging terrain of the Lesotho Highlands. The Club agreed, and so began the Roof of Africa Off-Road Motorcycle Rally.

Though the roads have improved somewhat, Lesotho still offers some of the best off-roading in all of southern Africa. The rugged terrain is sure to test both man and machine. If you go solo, make sure to keep an eye on the temperamental weather and have some mechanical know-how. Tours for all travelers, including family groups, are available for spectacular views from the kingdom’s nine passes. A drive through the fresh air of UNESCO World Heritage site Maloti-Drakensberg Park to Sani Pass is a particular highlight. No matter how many wheels you’re cruising on, motorized 4×4 vehicles are usually the quickest (and sometimes the only) way to get to Lesotho’s most remote locations.

Save a horse; go pony trekking. 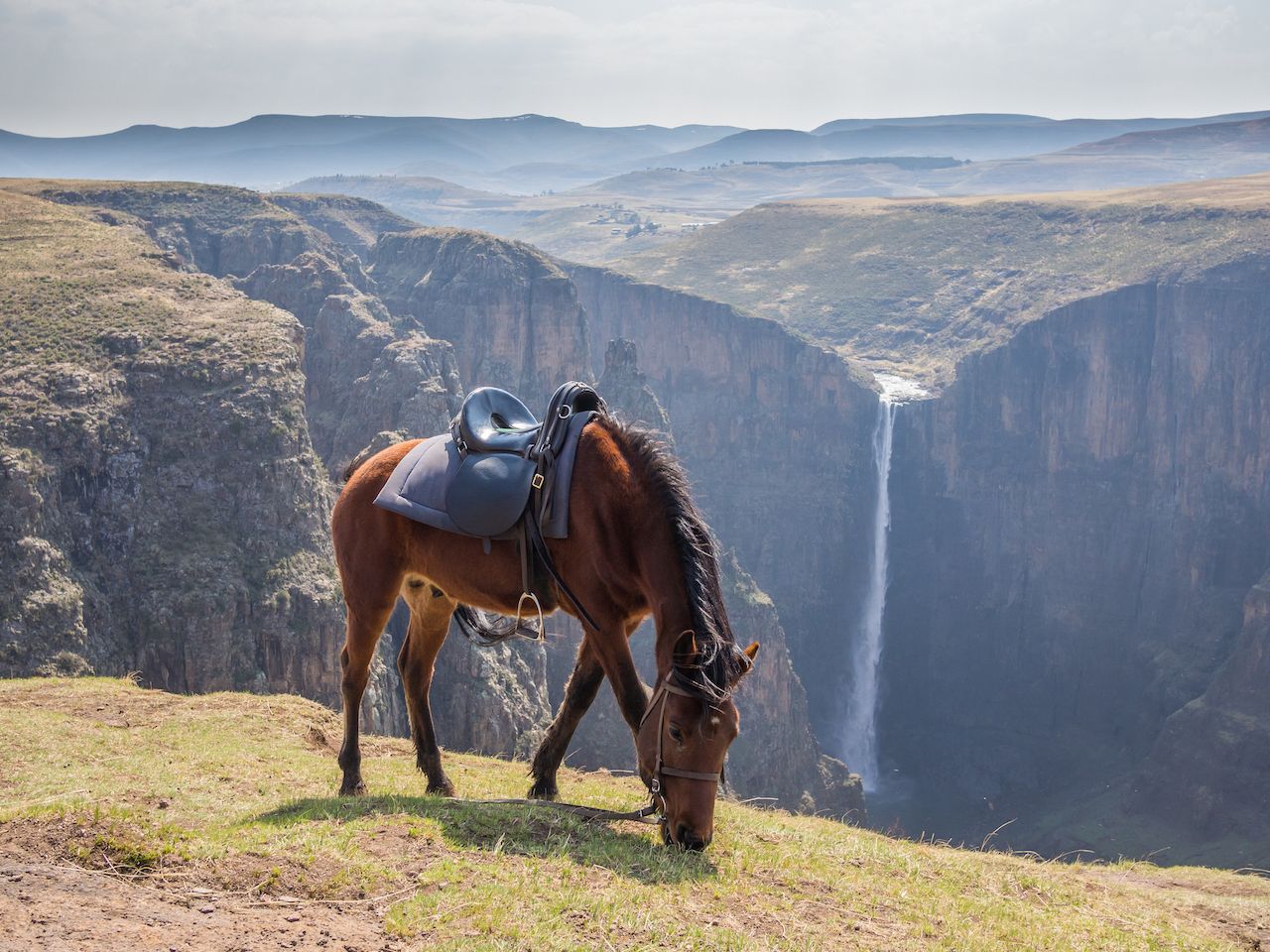 If rough 4×4 roads aren’t your thing, ditch the wheels and ride a Basuto pony instead. These rugged little guys are the best way to get you and your gear to all the stunning locations unreachable by 4×4. Trip lengths vary from hours-long safaris to multi-week excursions, and you don’t need prior riding experience. Tour operators such as Drakensberg Adventures will lead you into the backcountry. Plan ahead and book in advance of your arrival. Be sure to ask for a local guide when you book, and enjoy a peaceful trek free from the sound of rumbling engines and noxious exhaust fumes.

The fishing is on point. 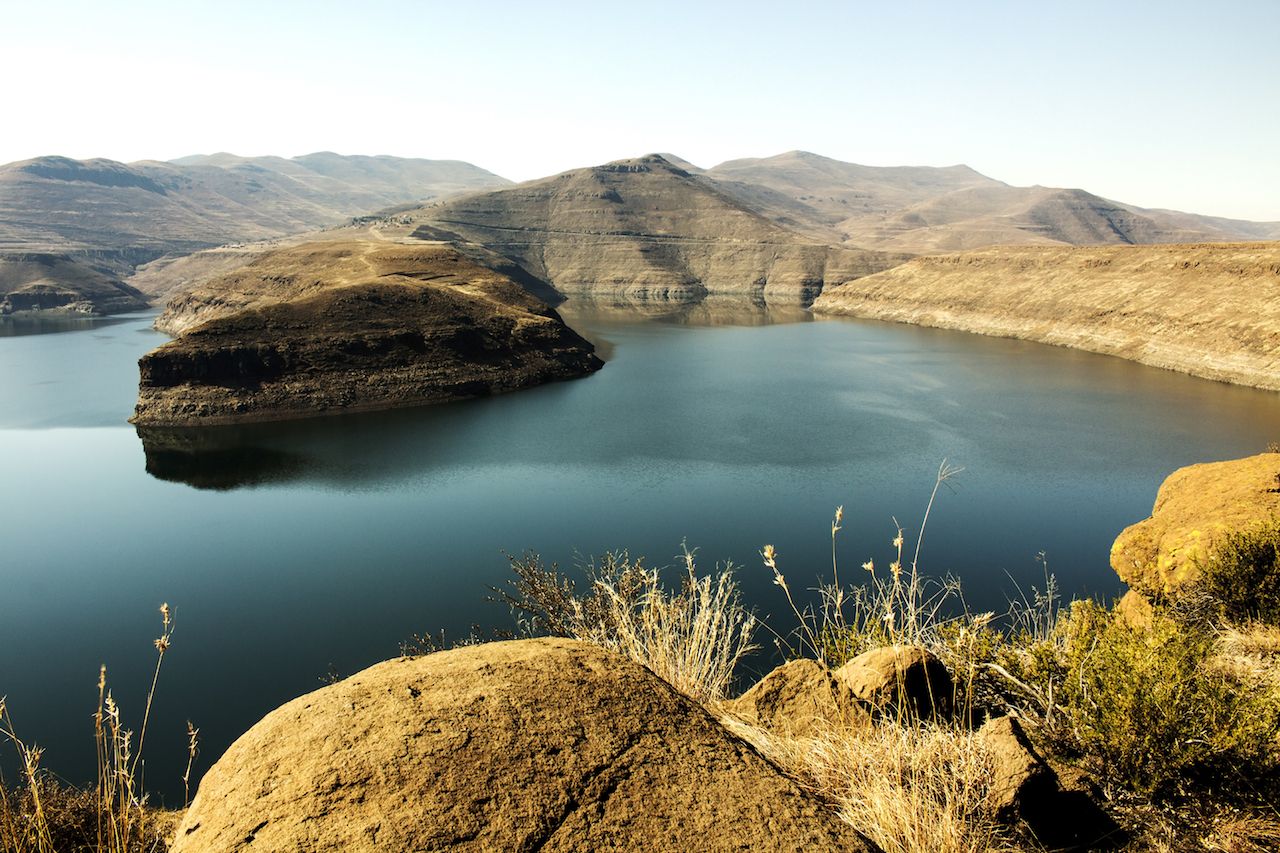 By pony, motor, or manpower, you’ve gotten yourself up into the Lesotho Highlands. Here, eons of erosion have carved out massive earthen water basins. Hopefully you remembered to pack your fly rod. The rivers and dams, kept cold and clear from September to May, offer exciting opportunities for high-altitude angling. If you don’t want to waste time looking for the best fishing hole, go trout-trekking with a guide from Semonkong Lodge and fish the Maletsunyane River for brown and rainbow trout. You’ll be battling and landing trout in true River Monster fashion from the first cast.

You can kayak beneath giants. 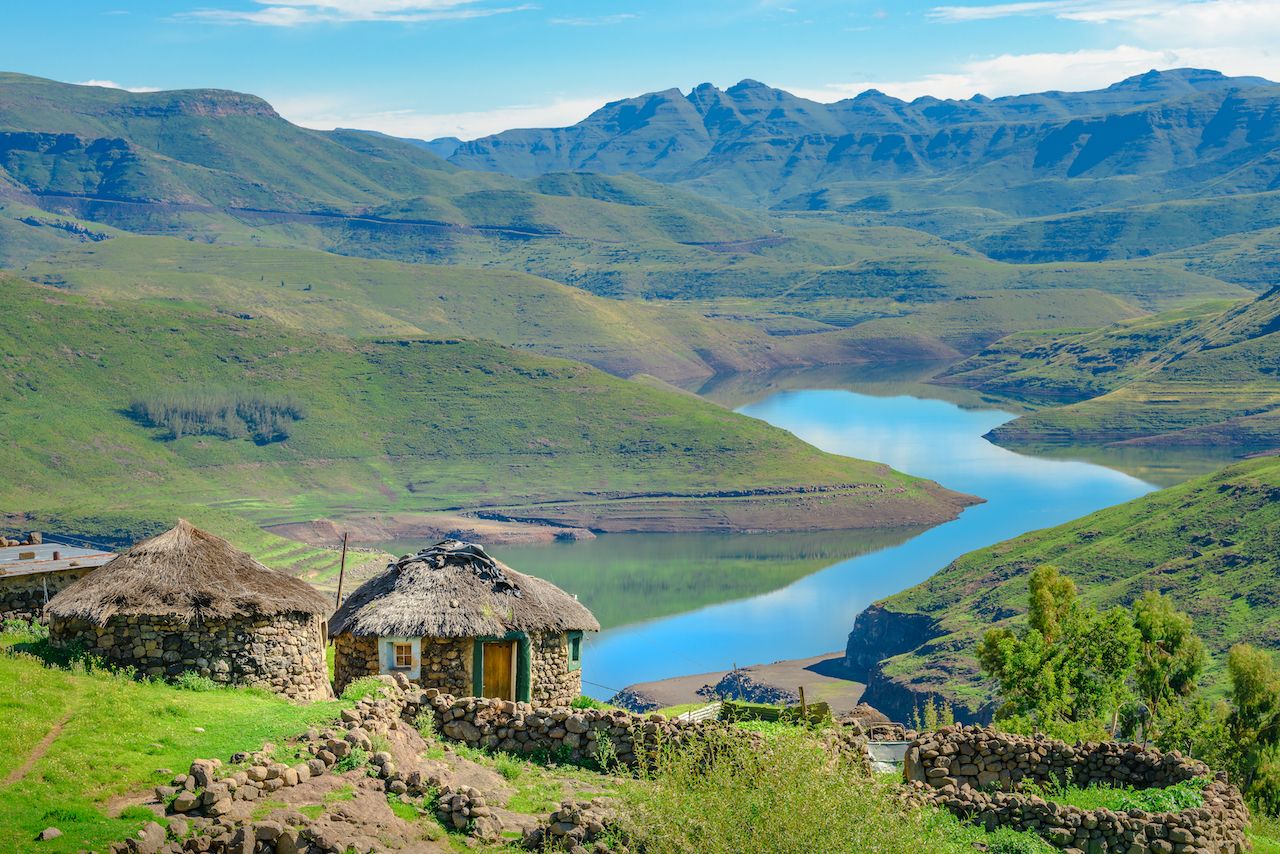 In Lesotho, you can paddle beneath a larger-than-life landscape that’ll leave you pondering your tiny existence in the universe. Locals refer to the water that flows through their kingdom as “white gold” due to its important role in encouraging economic growth. The Katse and Mohale Dams help bring hydroelectric power and irrigation to surrounding areas, but they also serve as perfect launching points for paddle or boating experiences. Bring a camera as you’ll see the clear, tranquil waters act as perfect mirrors for the monstrous mountains rising from the depths. Float onward from Katse Dam through the old Malibamatso Valley and bask in the sheer magnitude of the towering peaks on either side of the Malibamat’so River as they dwarf you in your tiny kayak.

The country is home to the world’s highest abseil. 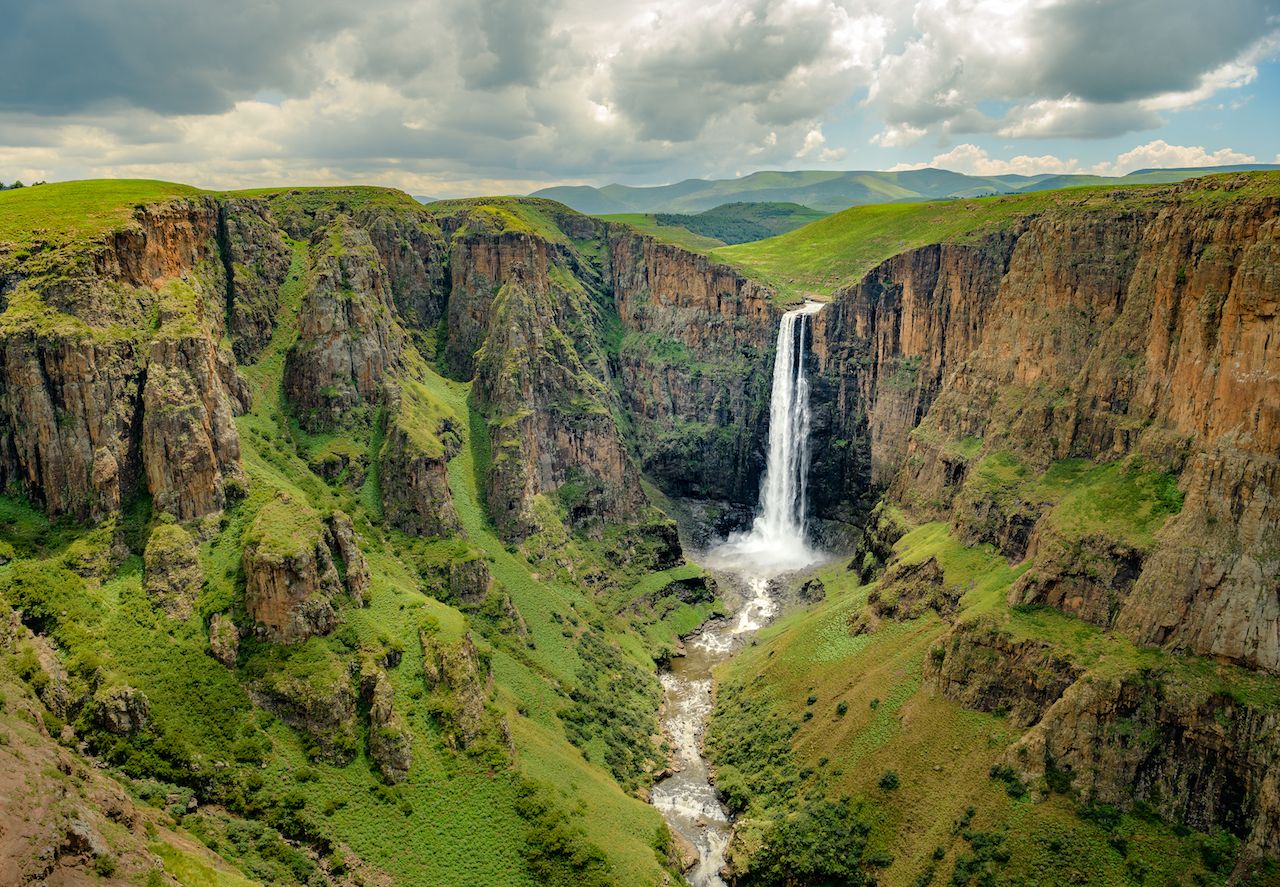 You’re strapped into the harness, helmet on. The guide gives the contraption a few tugs to check that it’s secure. You walk slowly, heat pumping, toward the edge of the cliff — backward. Putting full faith in the straps and cables that hold you, you lean back into open air and disappear over the cliff edge. You are now hanging 206 meters (676 feet) up, back parallel to the ground, as you abseil (rappel) down the world’s highest commercially operated abseil at Maletsunyane Falls. Rappelling off Maletsunyane rewards true adrenaline junkies with breathtaking views and a hose down from the mist blowing off the falls, leaving you drenched and triumphant as you plant your feet at last on solid ground. If you make it, you can forever claim that you descended the highest abseil in the world.

OutdoorHere’s Why Montenegro Is an Outdoors Paradise
Tagged
Trip Planning Lesotho
What did you think of this story?
Meh
Good
Awesome

Six Gift Ideas That Give Back This Holiday Season