A roar, shortly after 2:00 AM, nudged me gently from my deep sleep. The following was so loud it seemed to vibrate the floor. I sat up in bed and remembered exactly where I was: alone, on a simple wooden platform, deep in the Botswana wilderness — beneath nothing but a comforter, a mosquito net, and the star-lit sky.

Had it not been for the solid structure beneath me, which included a relatively secure lockable entrance and two flights of stairs, I may have felt more unsettled than I was. And growing up on a diet of similar safari-style holidays in neighboring South Africa gave me some context as to how objectively safe — yet thrilling — this opportunity was.

“Predators often come down for a drink at night,” Natural Selection guide Keorapetse Mosepele, better known as Max, said with a mischievous grin the night before. “This flashlight might be nice to have.”

It was, in fact, very nice to have.

I’d met Max the day before at Hyena Pan, a small tented camp in Botswana’s Khwai Private Reserve, where most guests begin their journey to Skybeds. Hyena Pan, the joke goes, should really be called Elephant Pan, given the near-constant presence of Africa’s largest land mammal. 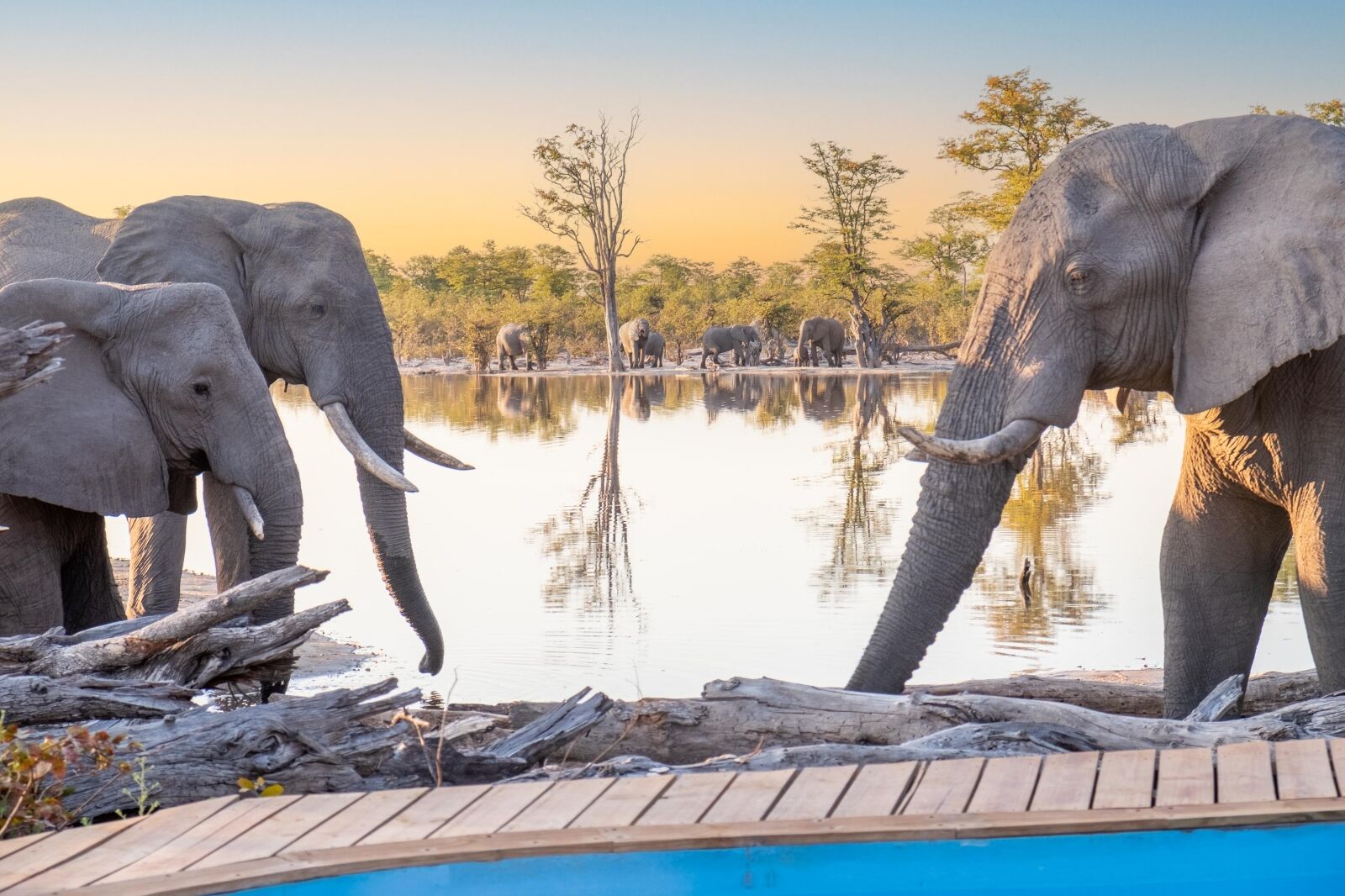 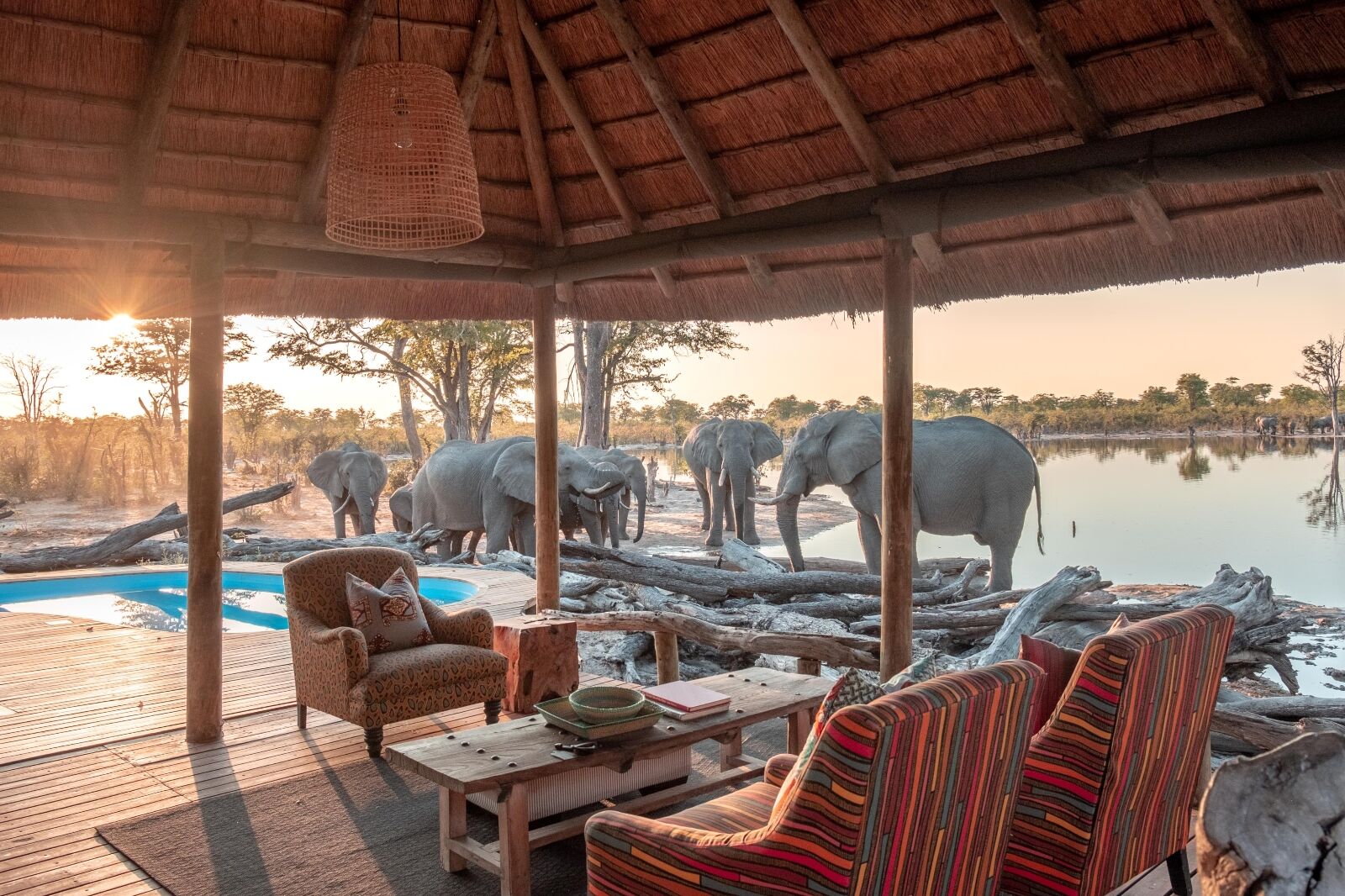 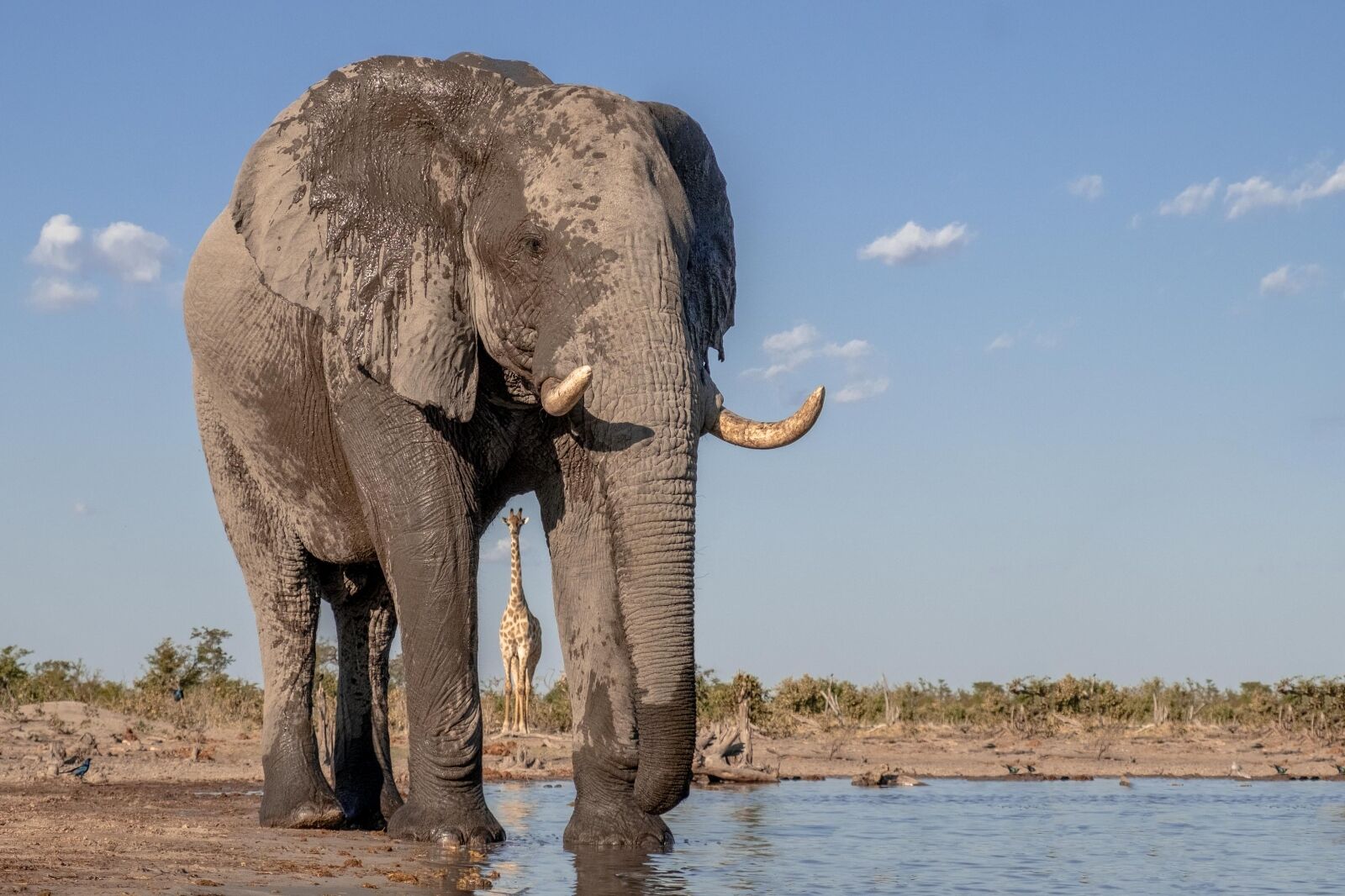 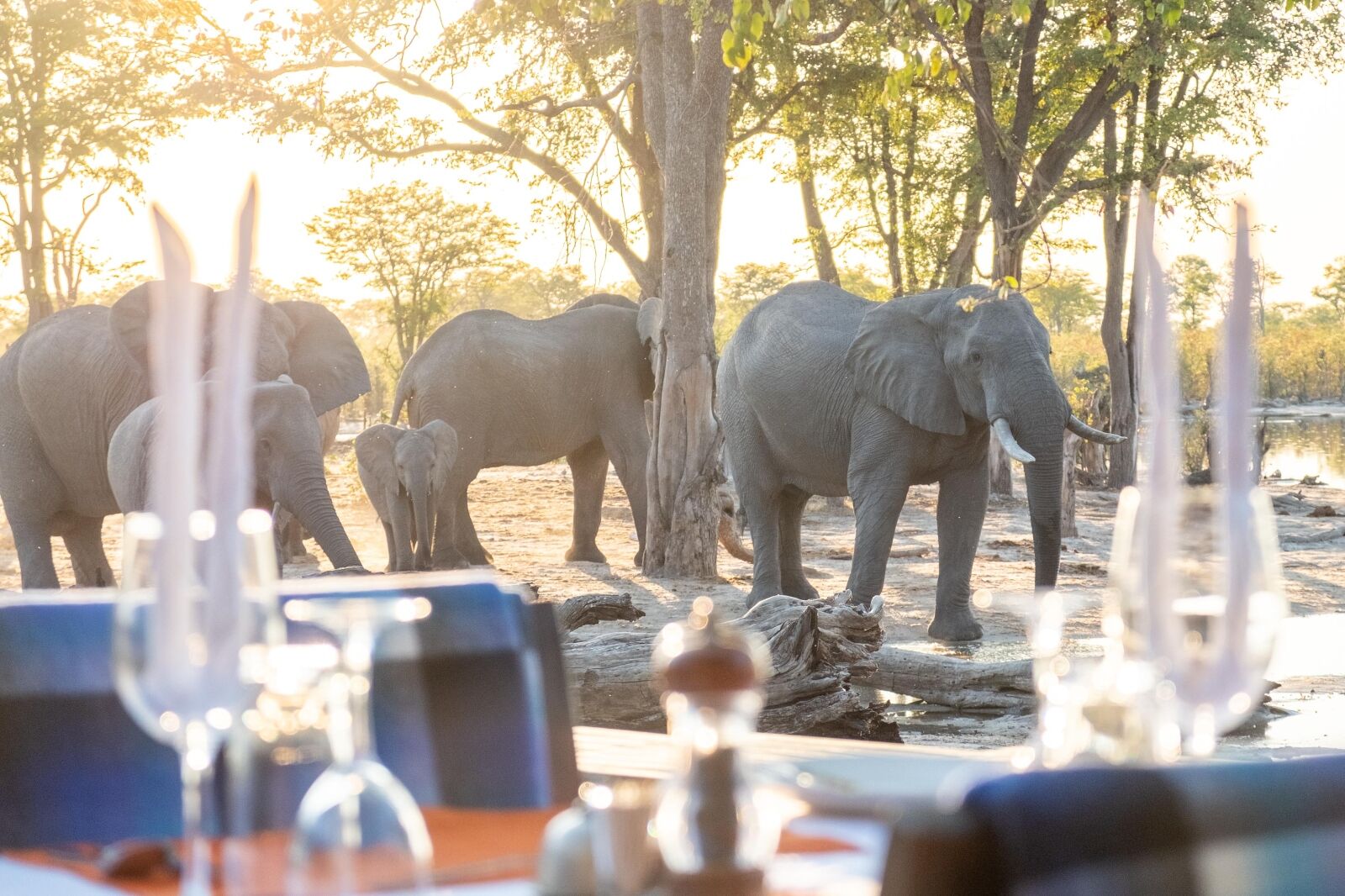 It’s within reach of the wildlife-rich Okavango Delta but is more widely celebrated for its large elephant population. And for this reason, an overnight stay at Skybeds usually includes a stop at the region’s star attraction — a sunken viewing hide famous for elephant sightings.

The hide offers a unique experience that gives guests an up-close water-level view of drinking elephants and other wildlife like giraffes, zebras, and various birds and antelopes.

After an hour spent watching dozens of elephants jostle for freshwater mere inches from our faces, Max quietly motioned for us to move on.

“It’s time to head to your evening’s accommodation under the stars,” he said in a loud whisper to avoid disturbing the elephants. “And I’m sure you’d hate to miss sunset drinks in the most idyllic place imaginable.” 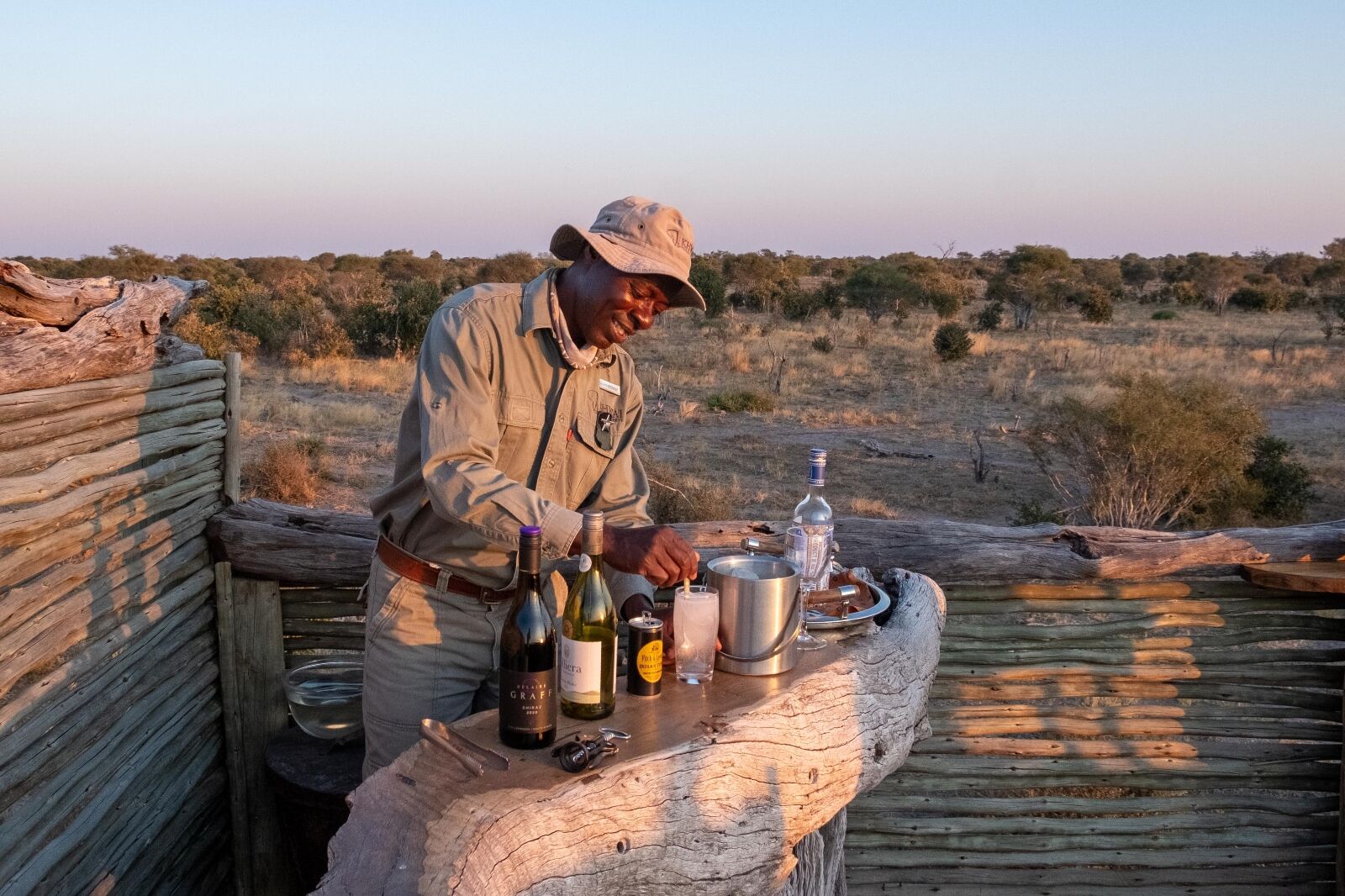 Skybeds is a pared-down camp as close to the middle of nowhere as you can get in Botswana. It consists of three double-story wooden platforms rising above the trees, spaced well apart, overlooking a small waterhole. Each has a lower-level bathroom with a flushing toilet, basin, and hot shower, with an upper-level open to the elements and set up with a luxurious double bed surrounded by a mosquito net. 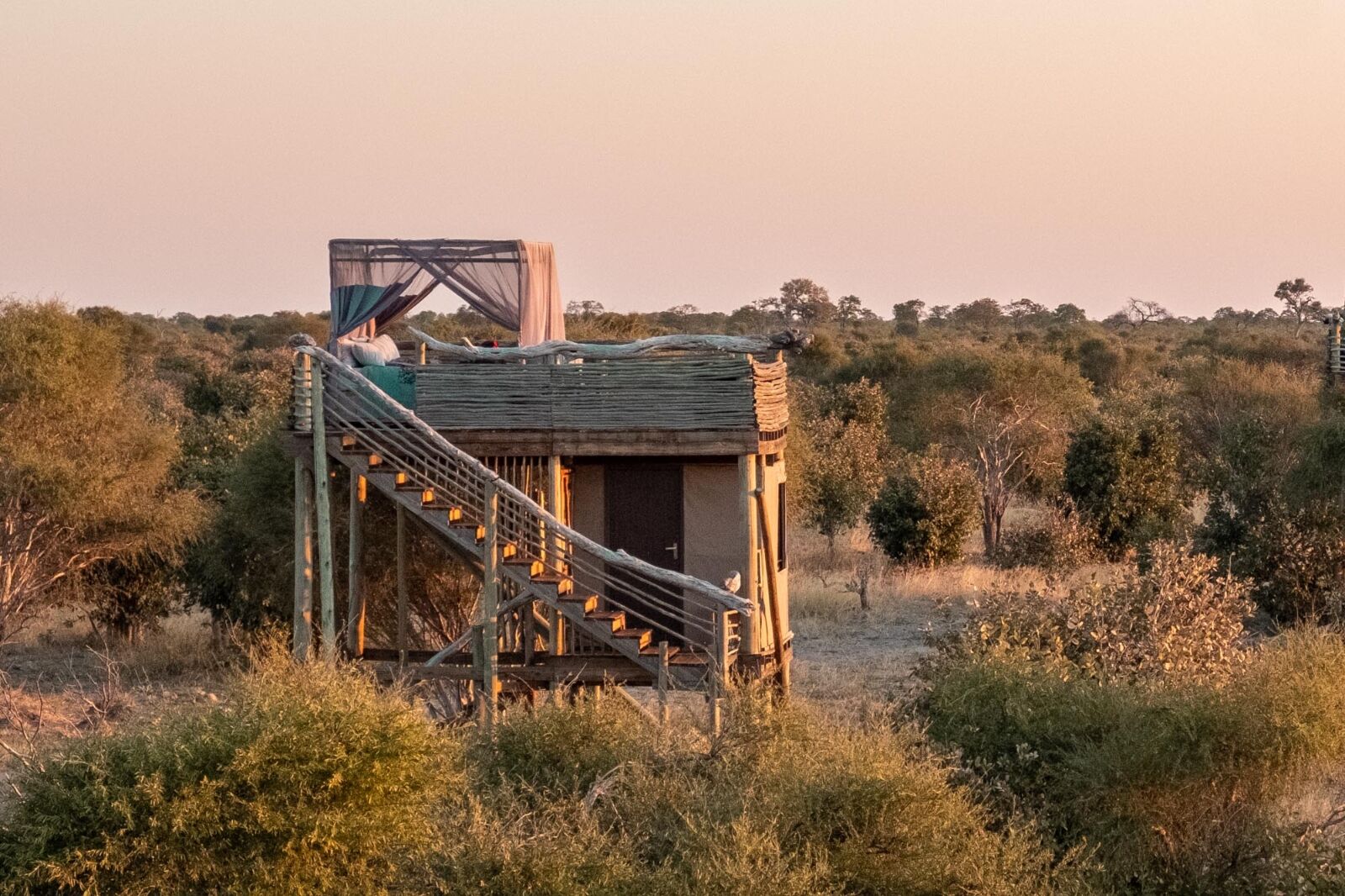 A single Skybed sleeps two and is the perfect balance of comfort and adventure. Photo: Andrew Thompson 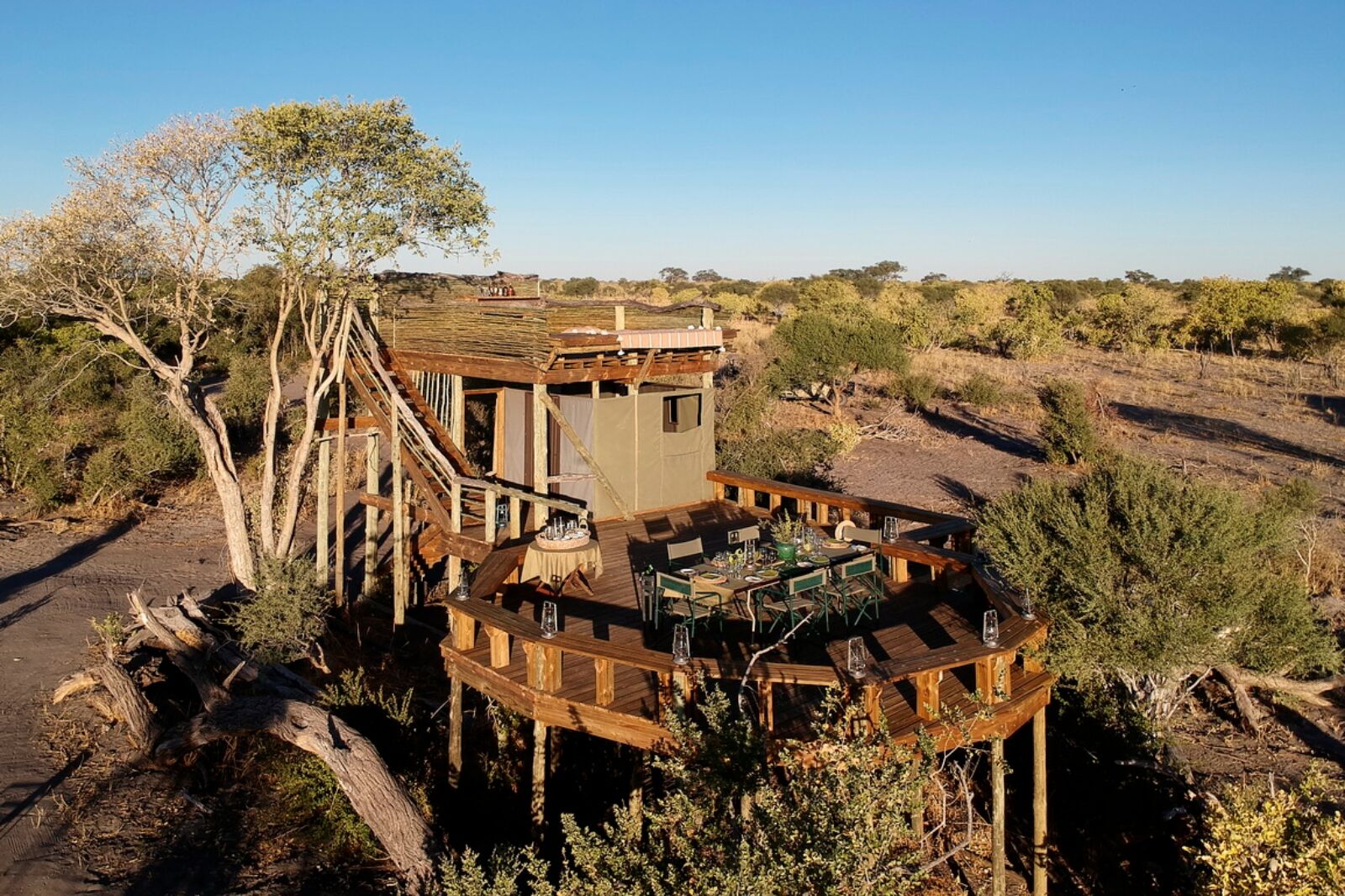 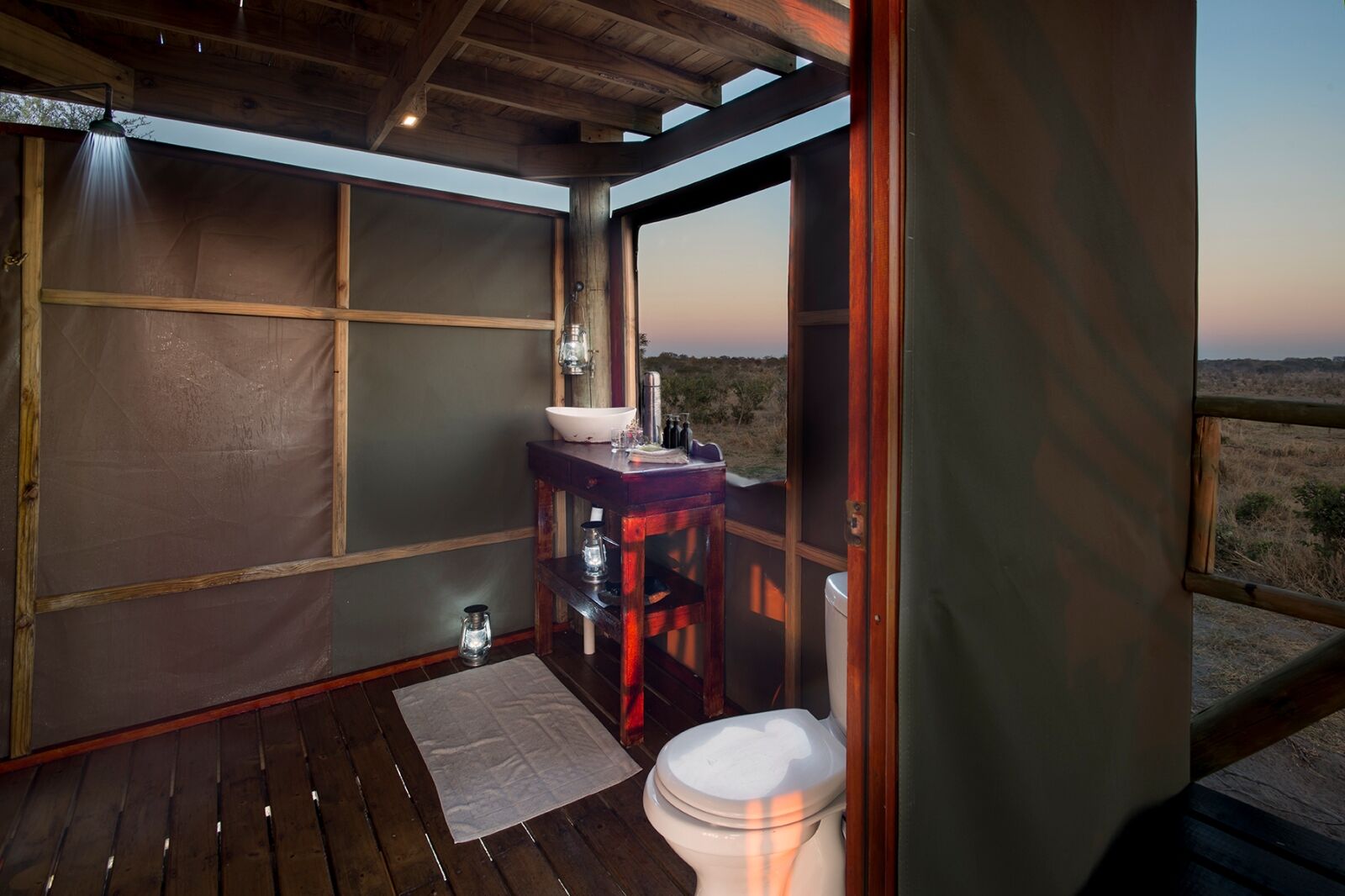 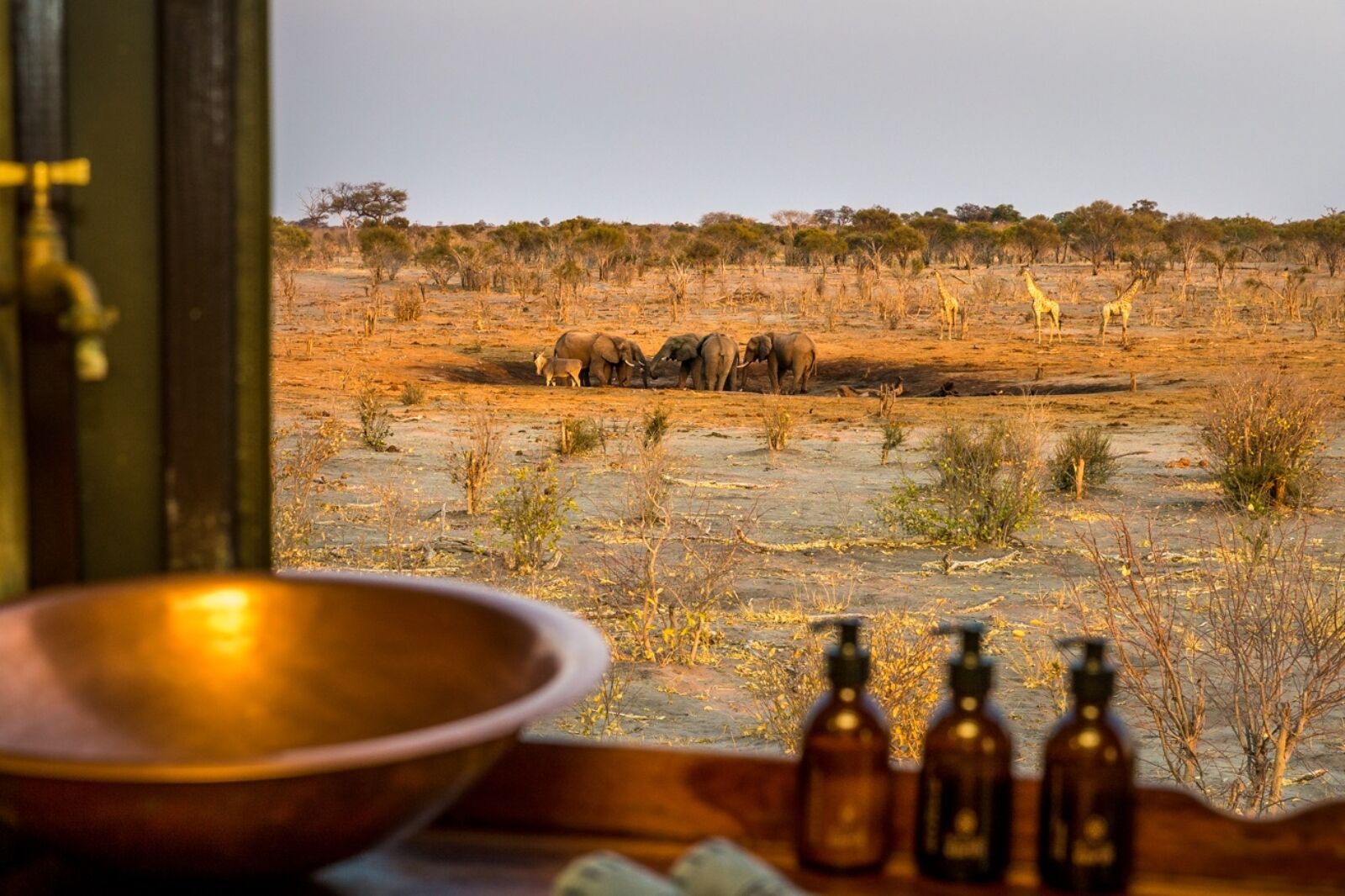 A fourth structure serves as the gathering point for meals and drinks. A small team is on hand to greet guests on arrival and serve a selection of beverages, which pair remarkably well with the view of the sun setting behind the small pan. And as if to ensure Max’s assertion that this may be a contender for most idyllic African sundowners, a small herd of elephants appeared in the twilight to take in a sunset drink of their own. 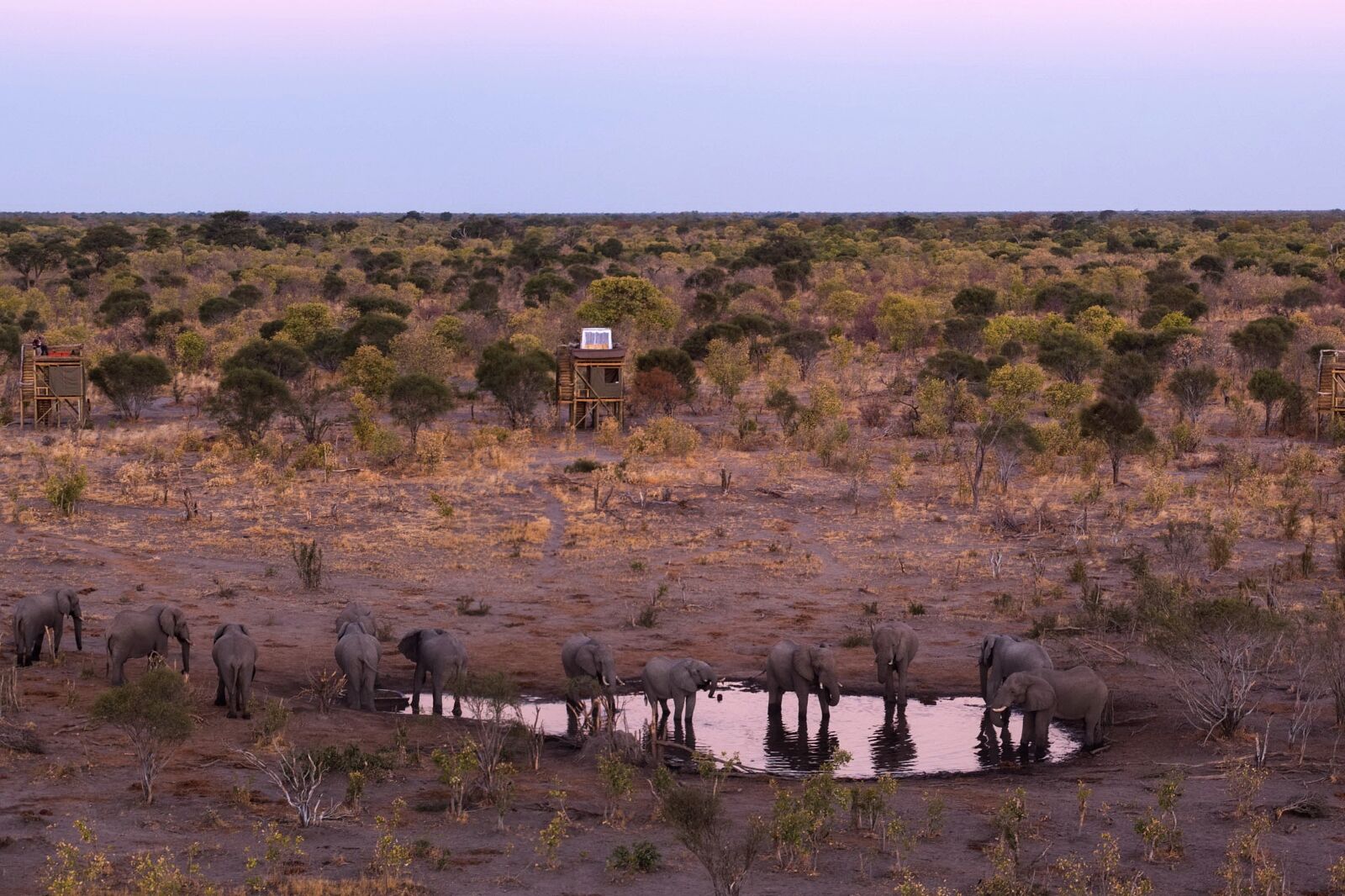 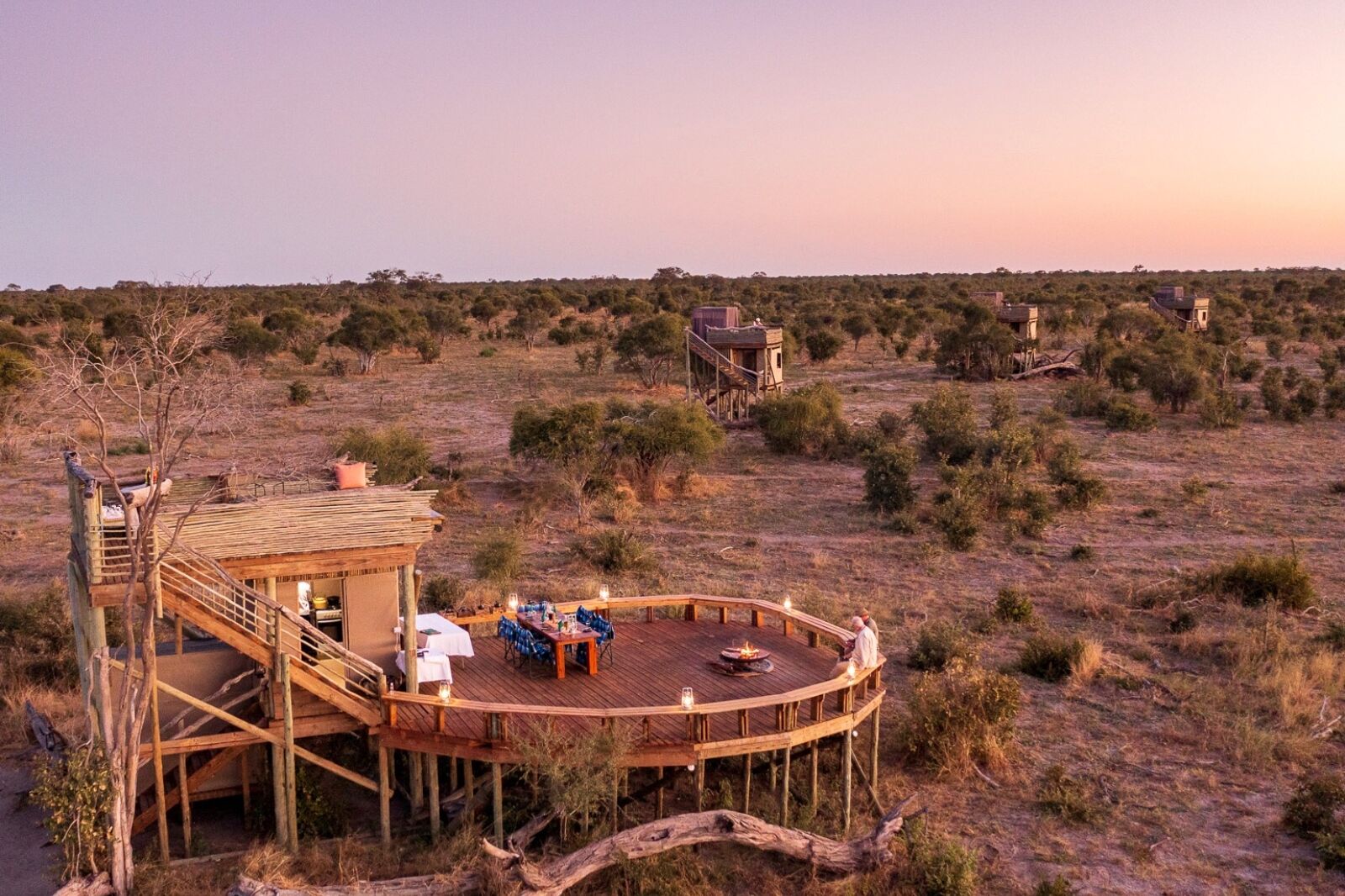 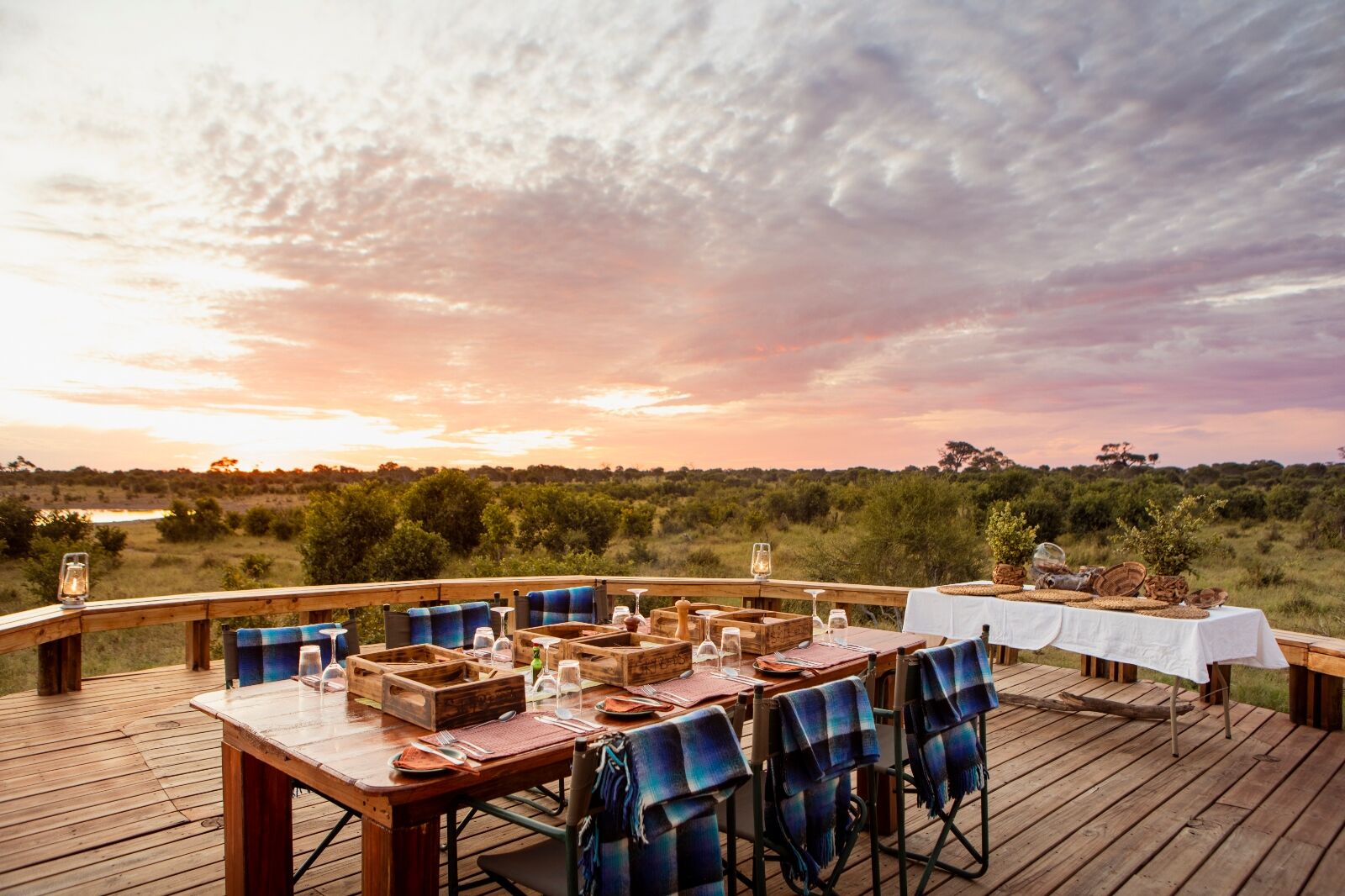 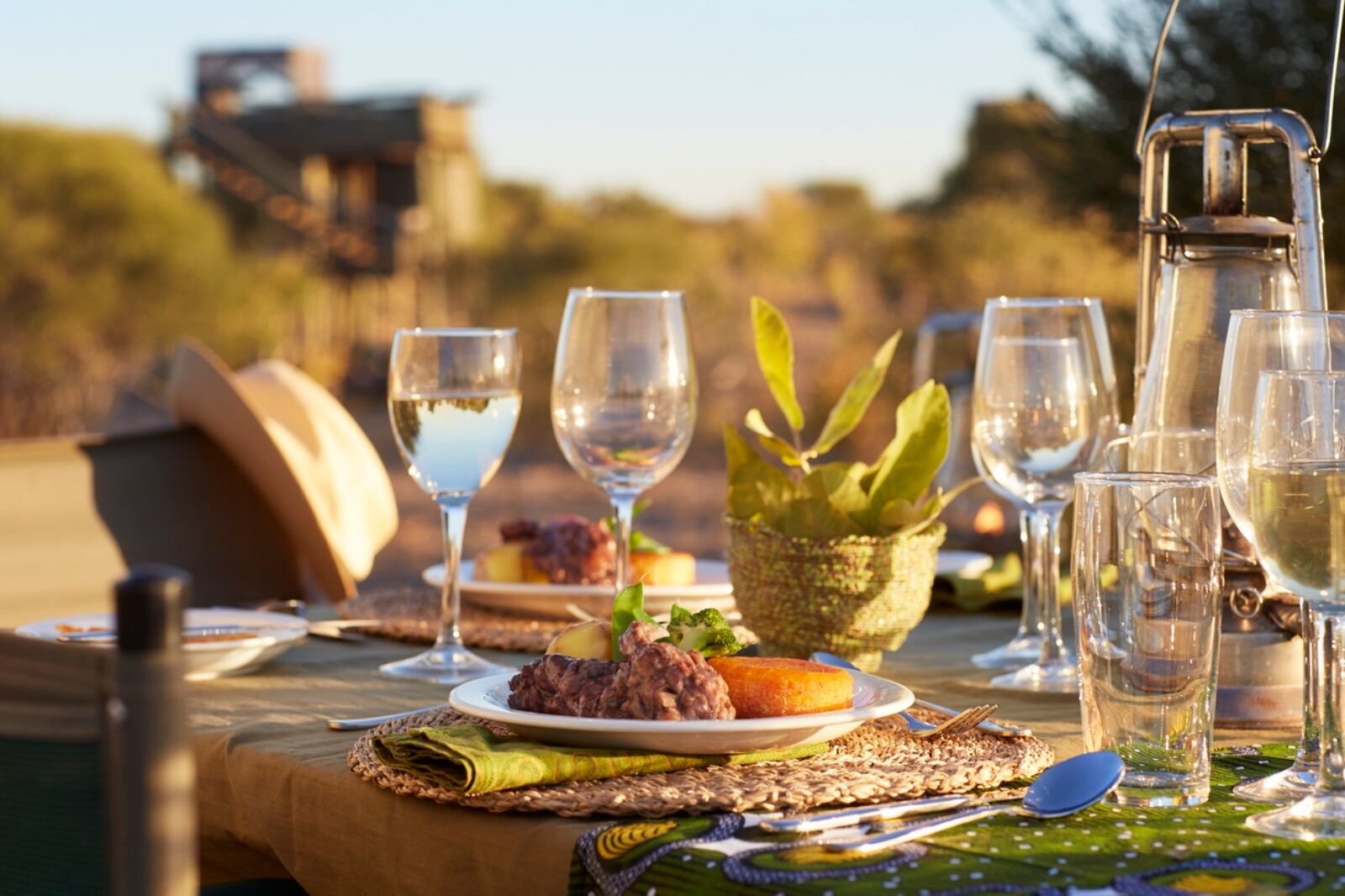 While absorbing the views and steeling myself for a night on the isolated platform, a team of two below me expertly prepared a traditional potjiekos dinner. A potjie, which refers to a Southern African meal in a cast-iron pot, usually consists of a stew or curry which is slow-cooked over hot coals. And on this night at Skybeds, the cooking was interactive — guests added various items, buffet style, into individual miniature pots. 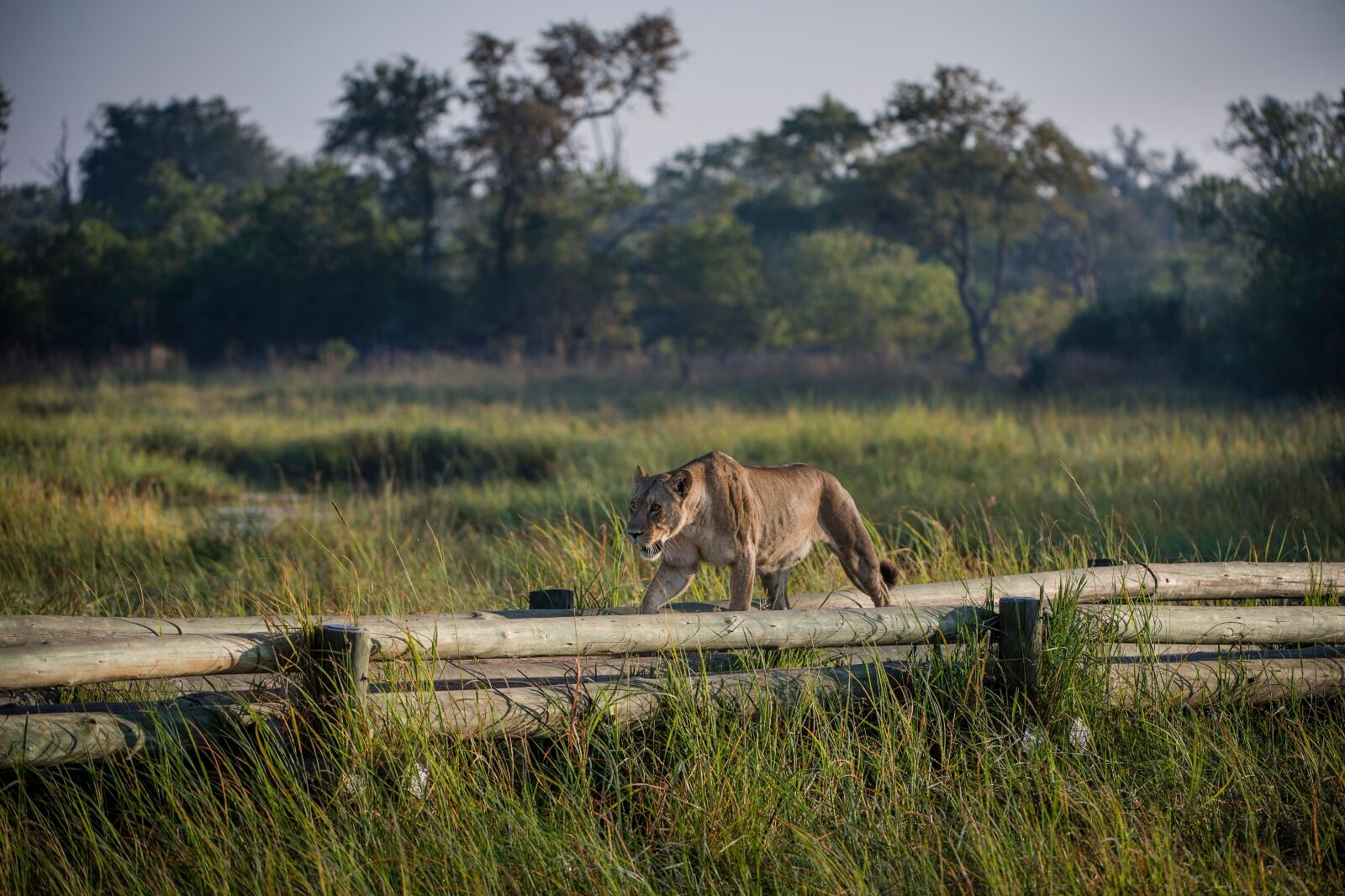 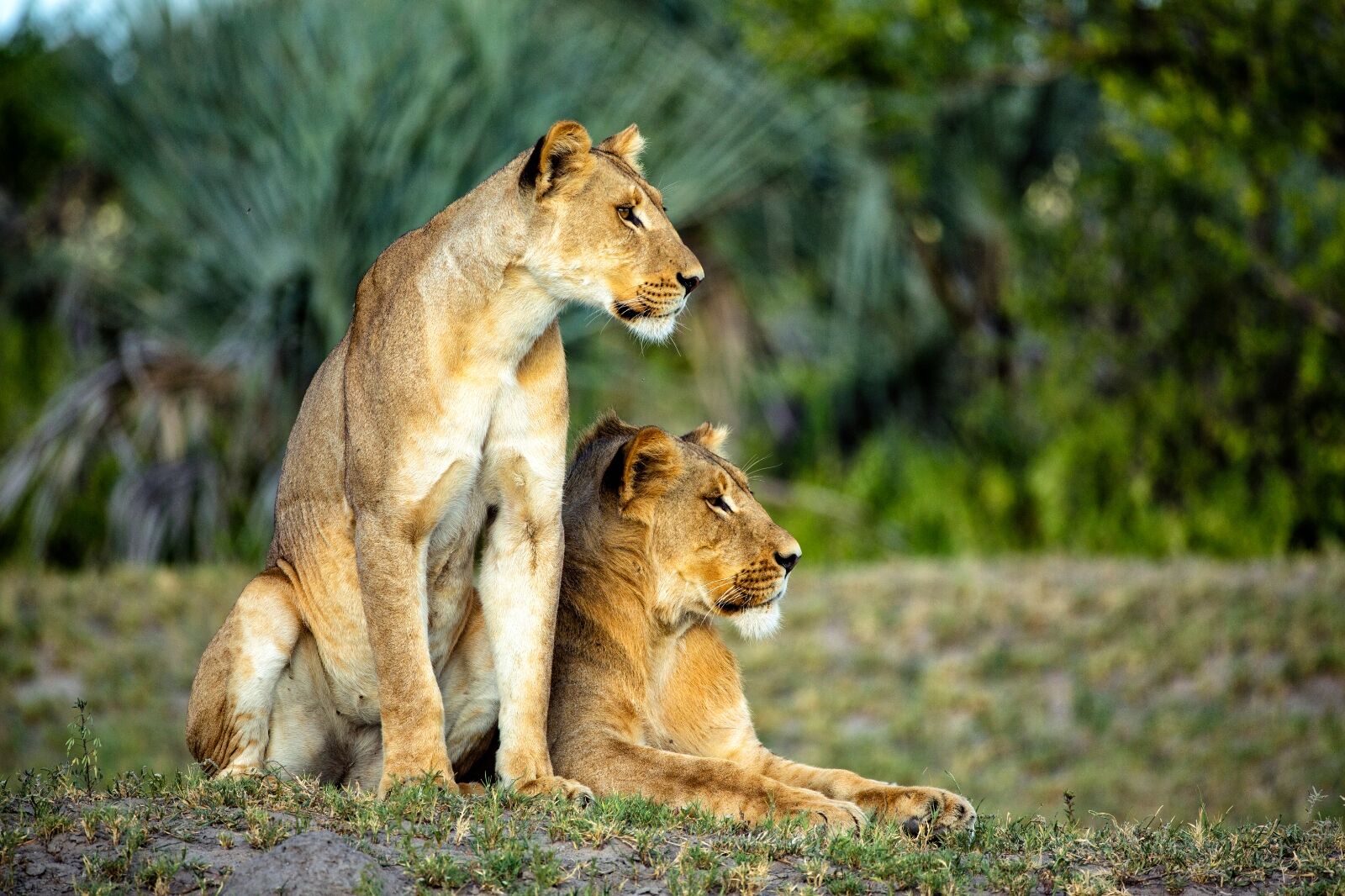 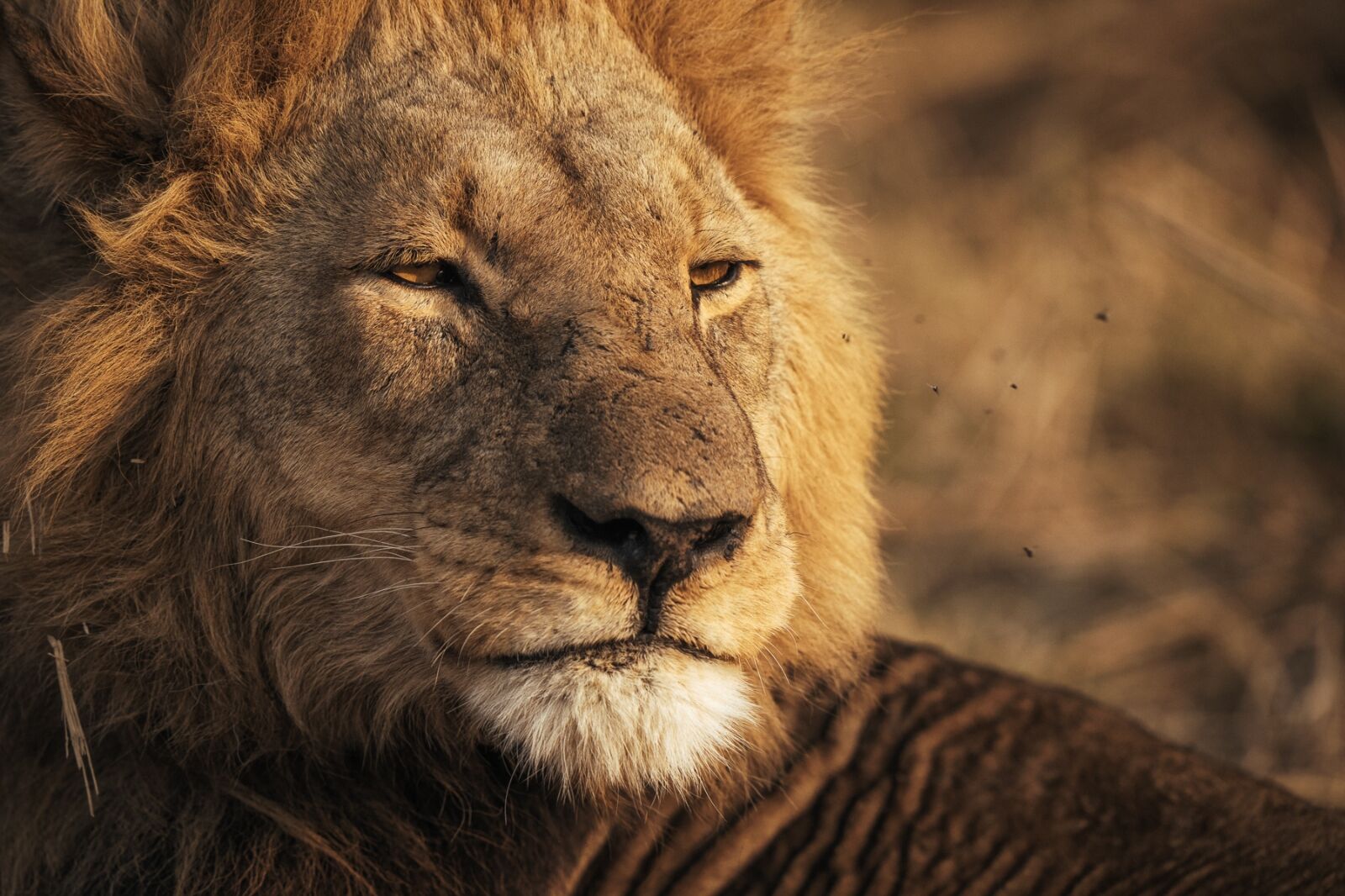 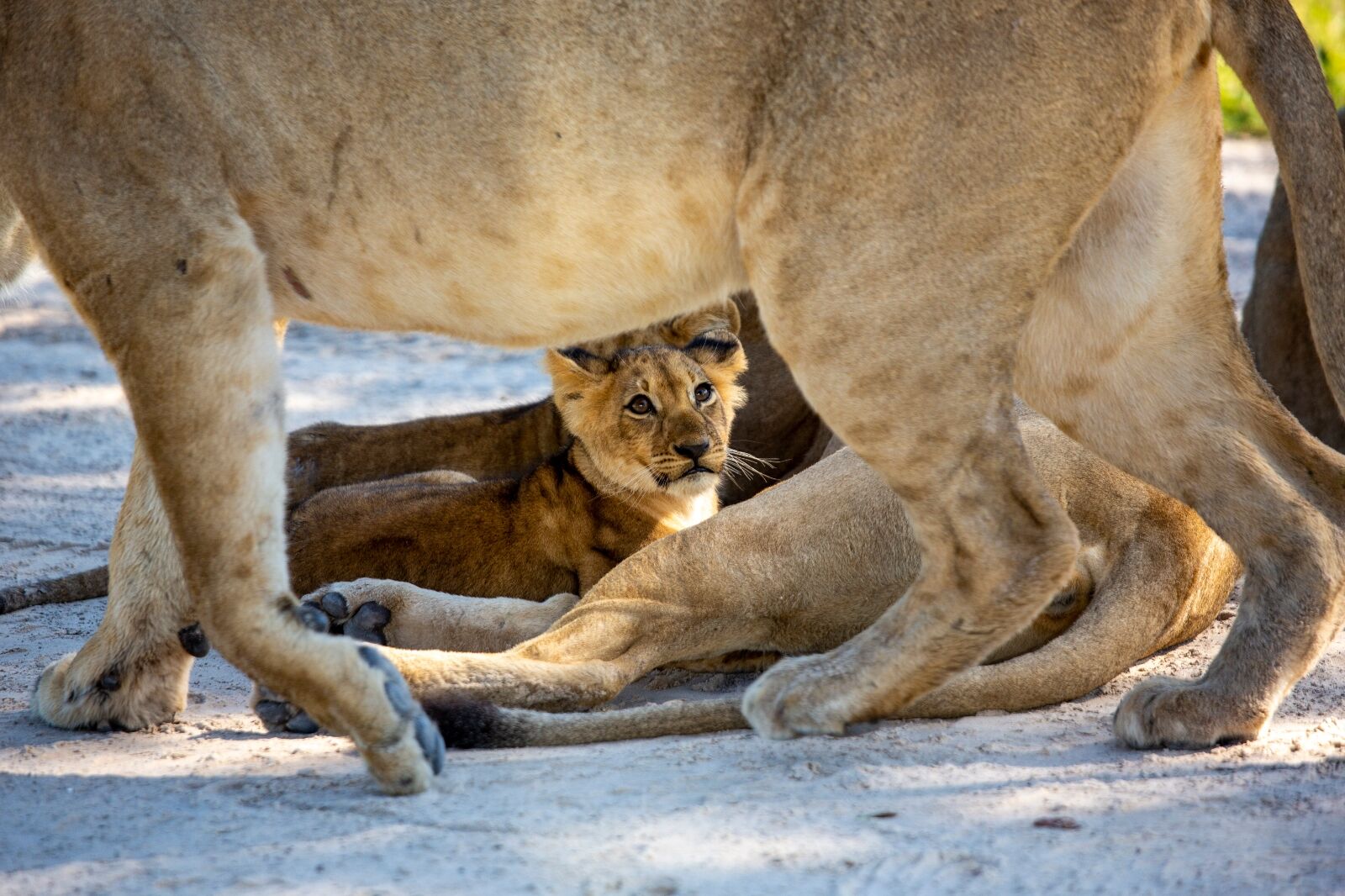 After a superb dinner, dessert, and a few nightcaps, it was time for Max to escort me to my sleeping platform. Because of the same predators he’d mentioned when handing me the flashlight, we traveled securely by vehicle.

The talk of these predators struck me as good one-liners and well-timed comments designed to linger in the back of my mind and add a sprinkling of excitement to the already thrilling outdoor sleeping experience.

But when that roar shook me from my sleep and had me sitting upright in bed, I realized he’d been serious.

Instinctively, I reached for the flashlight next to my bed, fumbled through the mosquito net, and paced to the platform’s edge. There, I excitedly scanned the dense mopane trees, hoping to spot the source of the commotion.

I knew the likelihood of spotting the lions was slim. You can hear a male lion’s roar up to five miles away. On a cool, windless Botswana night, where the guttural bellows have few obstacles. It may seem as if they’re emanating from beneath your bed when, in reality, they’re hundreds of yards away.

Just as I was about to give up the search and retreat to the comfort of the bed, I saw them: the glint of four eyes and the accompanying silhouettes of two large male lions.

The eyes locked onto my torch light and then seemed to focus instead on what stood behind it — a shivering and now not-so-bold individual, standing on a rustic wooden platform, alone, wearing nothing boxer shorts.

After a moment’s hesitation, they startled and bounded into the darkness, with the sound of heavy paws on the caked ground. 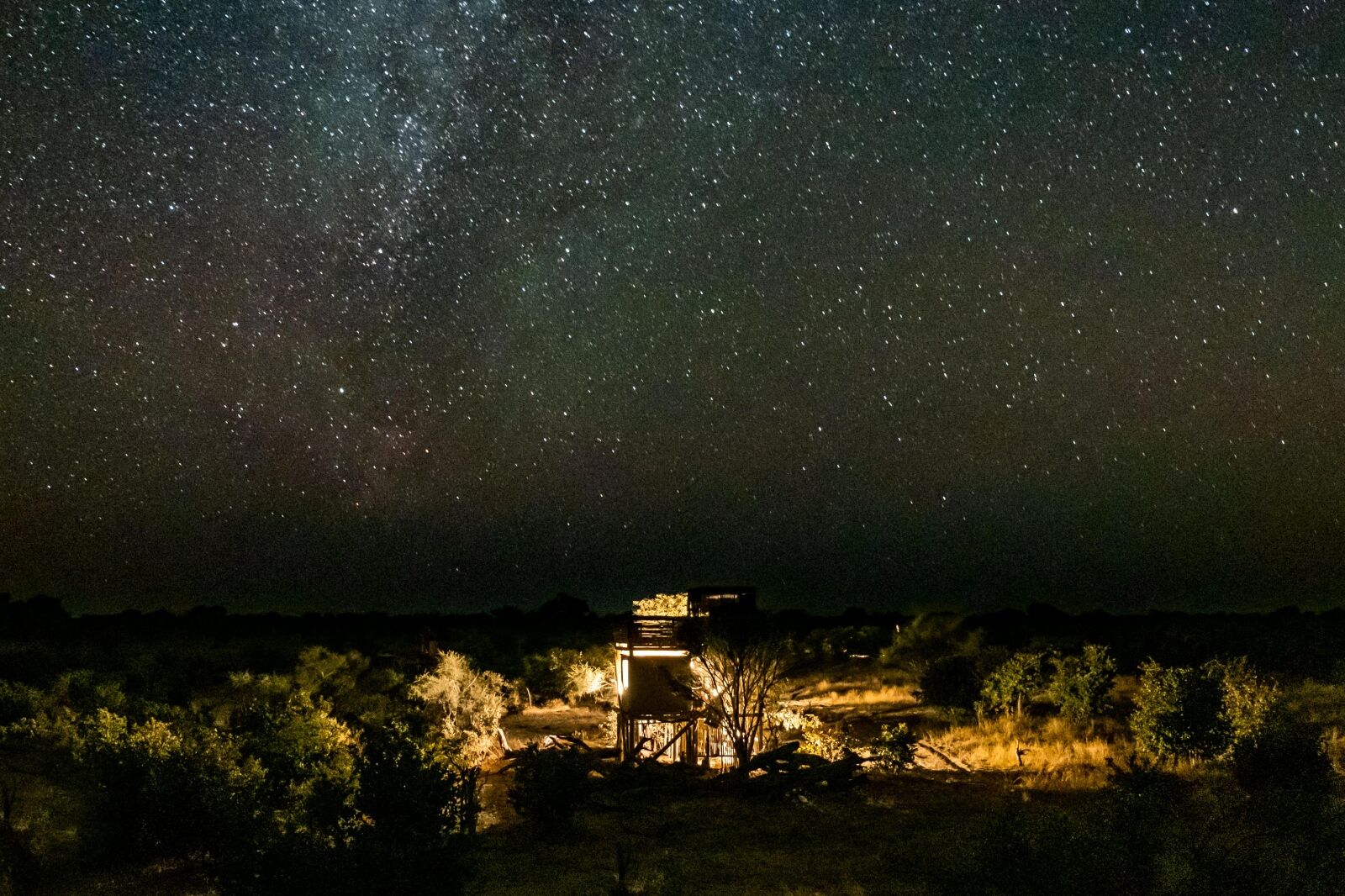 A Skybeds platform in the dark. Photo: Andrew Thompson 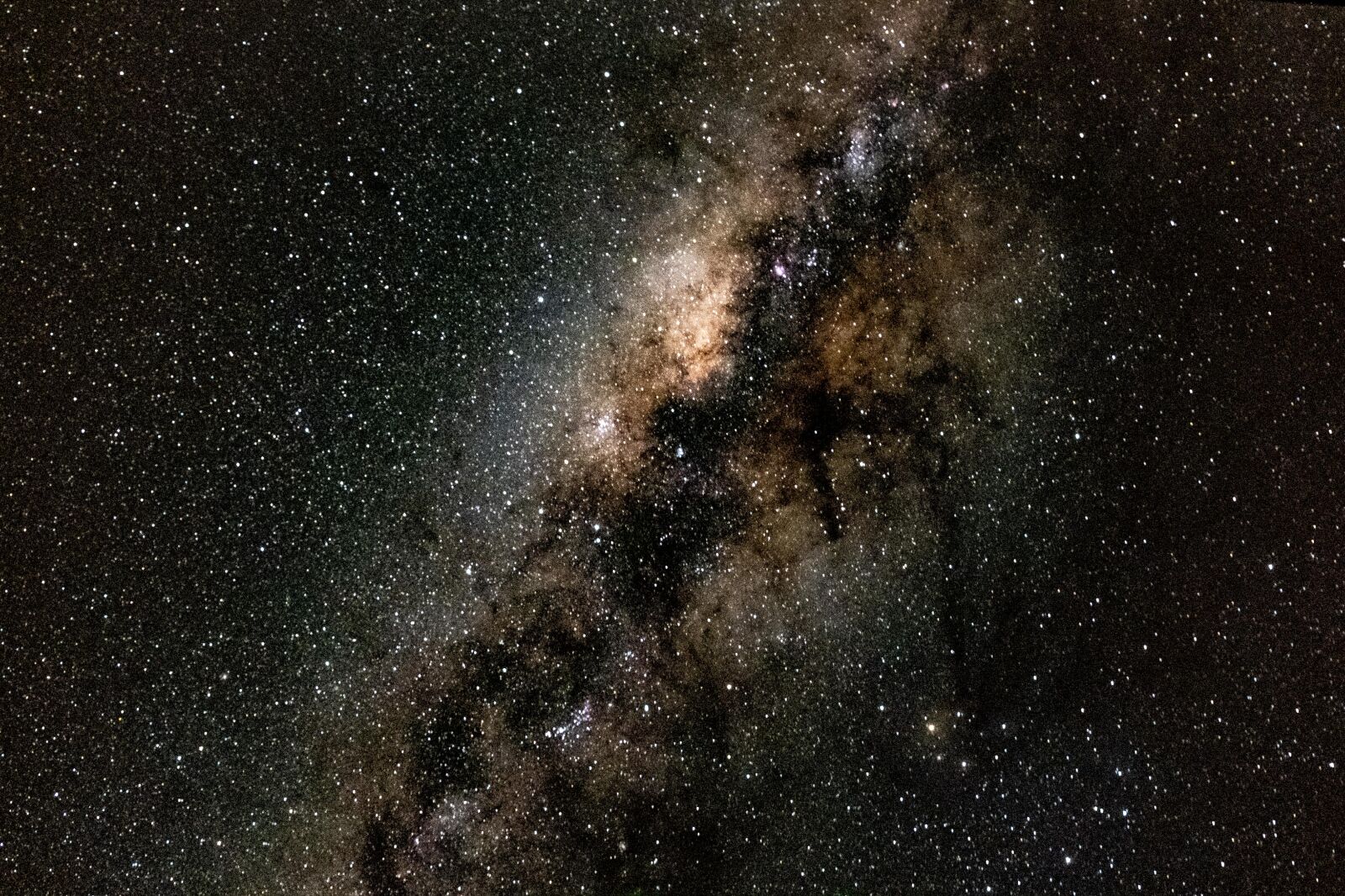 With adrenaline coursing through my veins, returning to sleep seemed unlikely — which is hardly a concern when sleeping beneath the stars in Botswana. The dense network shines brightly, thanks to no air or light pollution for hundreds of miles, and with enough patience, seeing shooting stars is a near guarantee.

I lay on my back, looking up, and counted four dramatic shooting stars silently searing paths across the night sky before I drifted back to sleep, rounding off a perfect night in Botswana’s Skybeds.

The return to reality started gently at first light — with coffee and freshly baked muffins around the fire, followed by a guided walk. 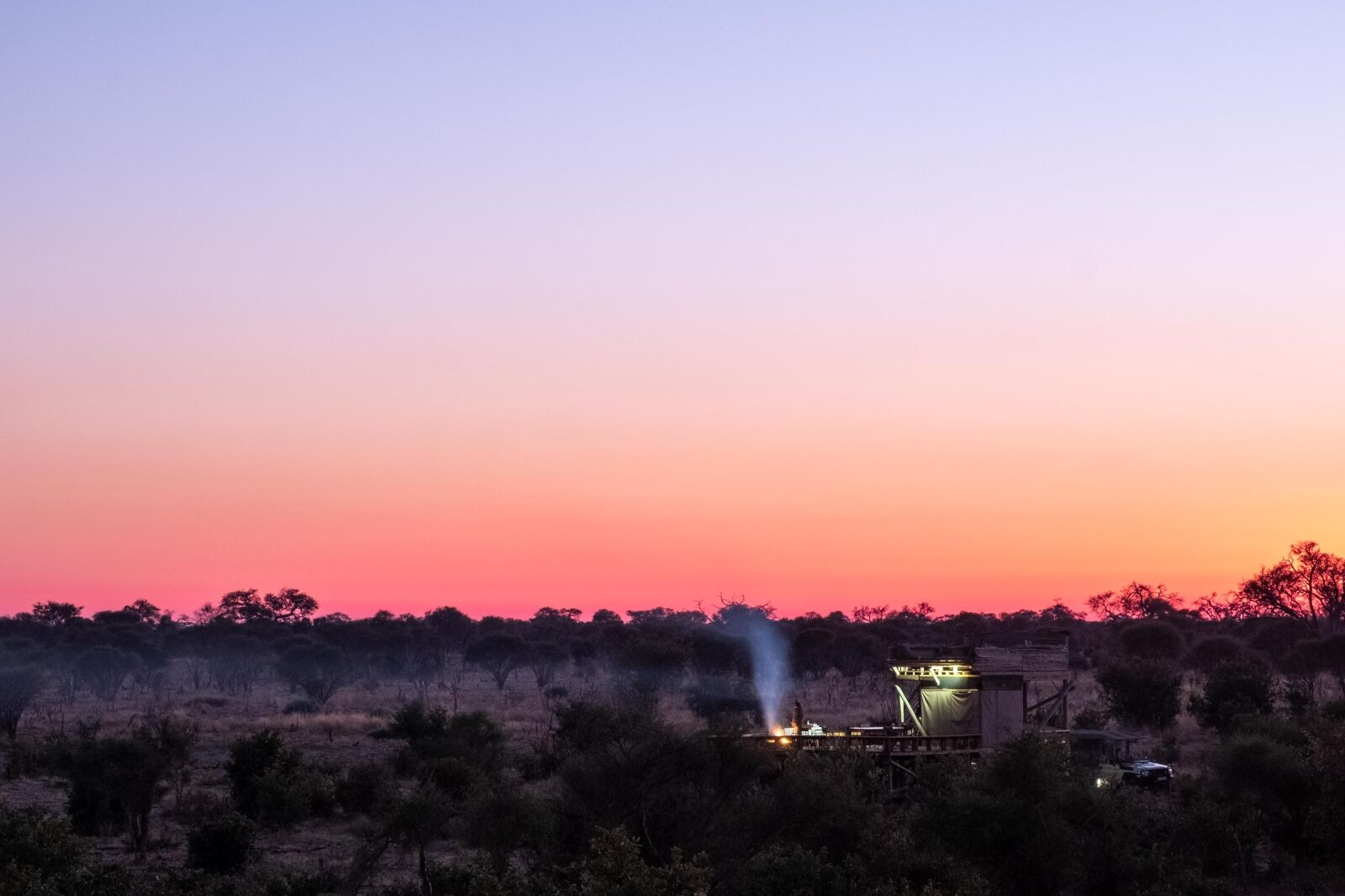 Max stands by the fire at sunrise. Photo: Andrew Thompson

Armed with a rifle, a wicked sense of humor, and years of experience in the bush, Max used the walk to showcase some often-ignored details around us. He found the tip of an old weathered elephant tusk that weighed over 40 pounds, droppings of invisible animals that revealed clues about their whereabouts, and multiple fresh tracks — including those of a female leopard and highly venomous puff adder.

But the most thrilling sighting was waiting for us back at camp — several lion paw prints roughly the size of Max’s large hands scattered mere feet from two of the sleeping platforms.

“So I wasn’t making it up,” he said with his trademark smile. “The lions were very close last night.”

An overnight stay in Skybeds Botswana is available only as an additional night’s stay from one of the Natural Selection sister camps in Khwai Private Reserve.

The closest lodge to Skybeds is Hyena Pan. It is reachable by road, but most choose to fly in on one of several daily small-plane flights from Maun International Airport.

Most tourists visit the area as part of a longer itinerary organized by a travel operator or Natural Selection directly, including stops at multiple lodges.

National ParksThis Luxury Lodge in Kruger National Park Is One of Africa’s Best Safari Destinations
Tagged
Epic Stays Botswana
What did you think of this story?
Meh
Good
Awesome

Botswana Is Reopening To International Tourism on December 1

The Mysterious Deaths of Hundreds of Elephant in Botswana Finally Cracked

A Leopard Paws a Safari Tourist’s Foot in a Scary, Wild Encounter

People of the Earth: San Tribe