Mountains and lakes, gorges and cave systems, waterfalls and forests for days. A small country it may be, but Slovenia is big on nature. There is what feels like an endless abundance of the great outdoors to enjoy in its 7,800 square miles. Even the capital city of Ljubljana is green at heart, named European Green Capital in 2016, while more than half the country is covered in forests of beech, pine, fir, and more.

The country’s small size makes getting a taste of the varied natural beauty on offer easy to achieve in just a few weeks. You could go from the limestone heights of the Julian Alps in the north to the dense and mystical primeval forests of the south in as little as three to four hours by car. If you pass through Slovenia on your next European adventure, don’t stop only for a tour of Ljubljana and a taste of the iconic cream cake at Lake Bled. Add these five places to your itinerary and make it an epic break in nature, too. 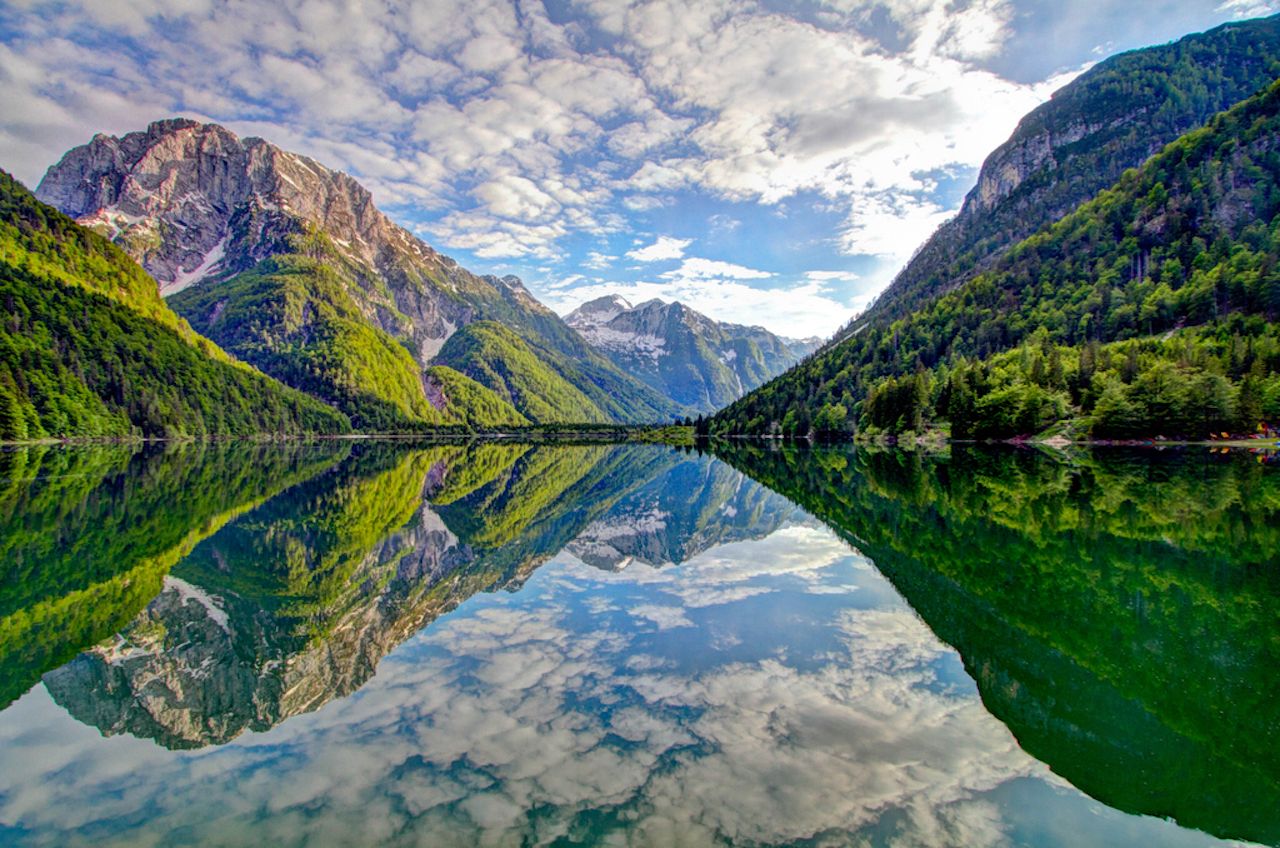 The Soča Valley gets its name from the local river that flows through western Slovenia into neighboring Italy. The rare green color of the Soča has rightfully earned it the title “Emerald Beauty.” Photos don’t prepare you for the water’s aquamarine intensity, and heading to this corner of the country is worthwhile for the chance to swim in it alone.

A series of towns are found along the river’s course, where there are great starting points for hikes such as the Kobarid Historical Trail. The Kobarid trail combines heritage and nature, eventually leading you through a peaceful forest to the impressive Kozjak waterfall. It’s not the country’s tallest — that’s Boka, also in the Soča Valley — but it is one of the loveliest. A rush of water powers through a rugged crevice inside a cave-like hall of rock. 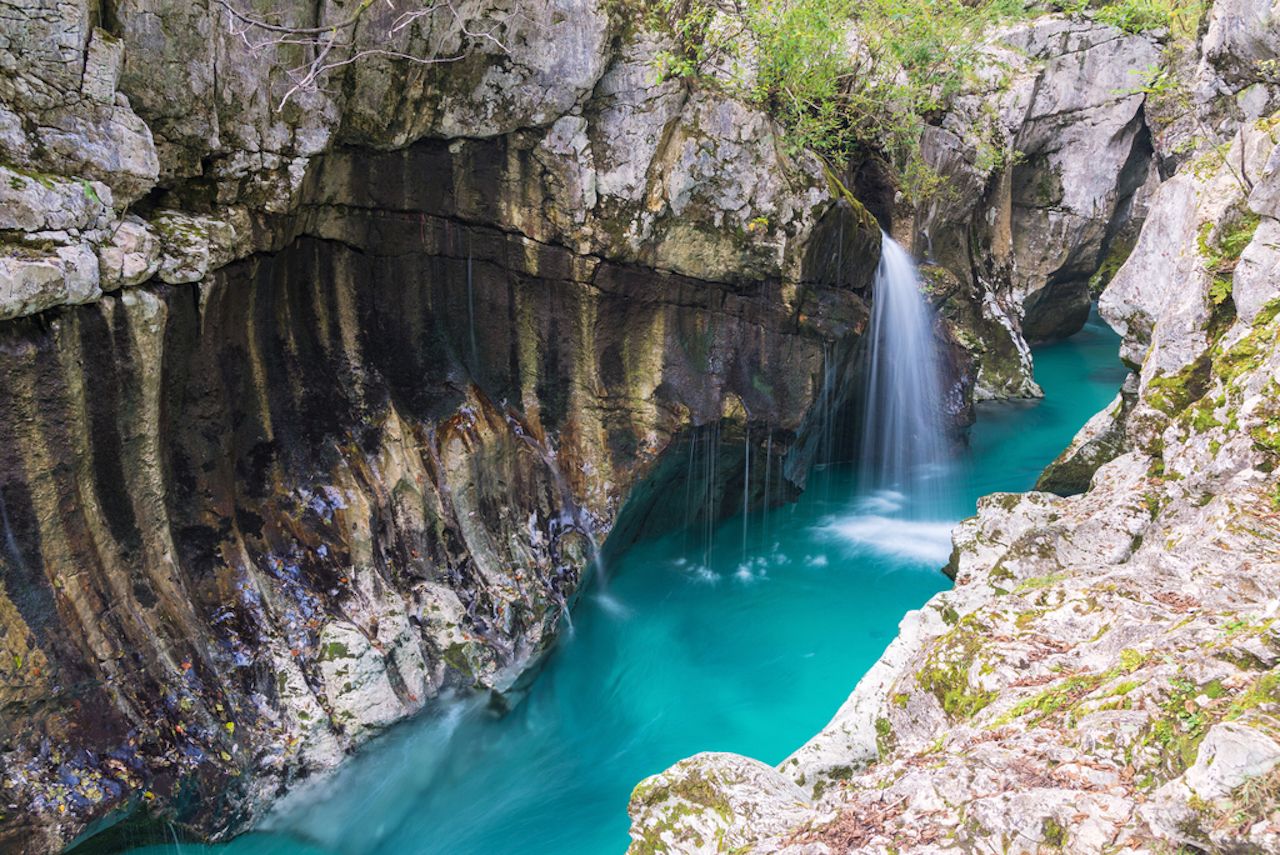 The Tolmin Gorge is another spot to marvel at the area’s icy clear waters. It has all the beauty of the more well-known Vintgar Gorge near Bled, with far fewer crowds. Carved out by Soča’s adjoining rivers, the Tolminka and Zadlascisca rivers, the gorge has plenty of ground-level trails and wooden boardwalks that lead you around its dramatic rocky scenery. Some of the most famous formations are Bear’s Head and Dante’s Cave, credited with inspiring Hell in The Divine Comedy. Then there’s the man-made Devil’s Bridge. Towering over the gorge at nearly 200 feet, the bridge gives you a birds-eye view of the snaking river below. 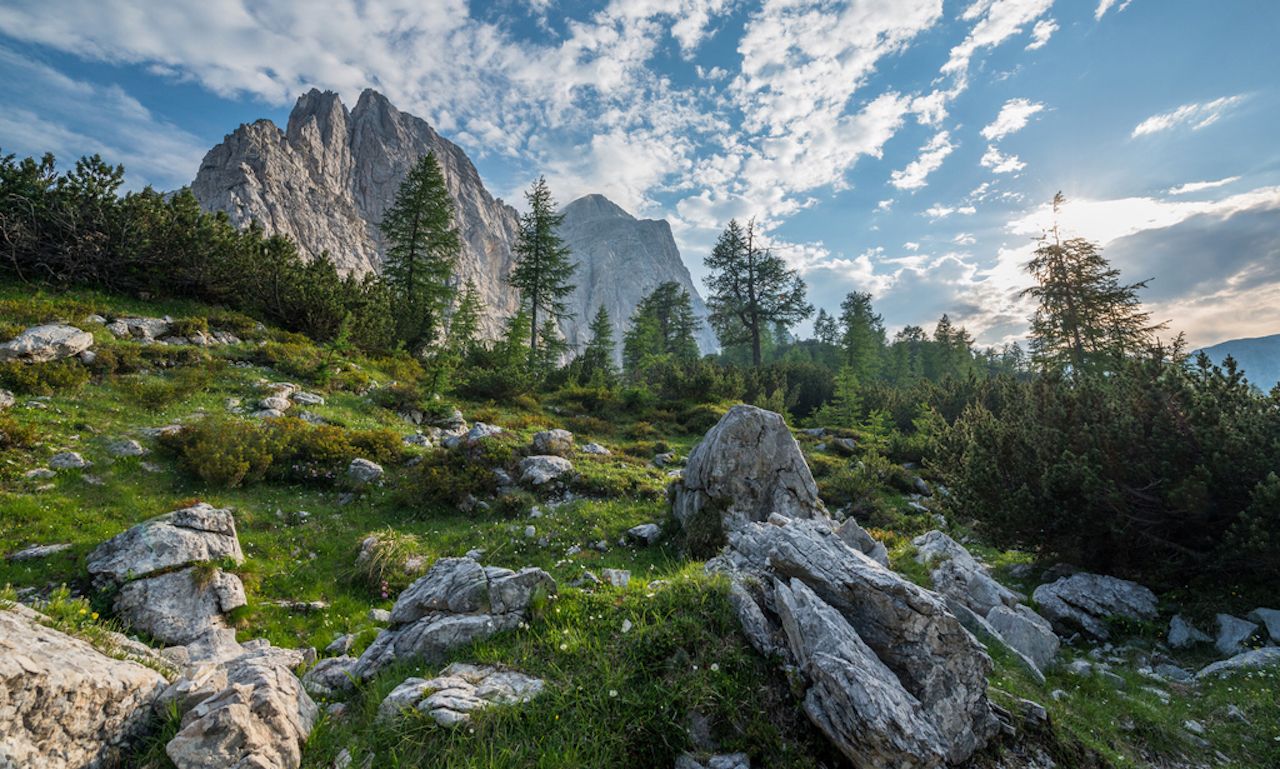 Triglav National Park’s serpentine Vršič Pass is the highest mountain pass in Slovenia and is notorious for its 50 hairpin turns. Despite the very well-maintained roads, it’s inevitably a bit of a hair-raising drive. Brave the twisting inclines, though, and you’re rewarded with awe-inspiring vistas of the Julian Alps at every turn.

There are plenty of stop-off points where you can pull in and admire the almighty Mount Triglav, the tallest mountain in Slovenia at 9,396 feet, and the surrounding peaks. Also keep an eye out for the Prisank Window, a natural mountain opening that measures almost 250 feet high and around 130 feet wide. Also on Mount Prisank, which is sometimes called Prisojnik, is the myth-laden Buckwheat Girl. “She” is a surprisingly well-formed face that has naturally appeared in the jagged mix of white and gray limestone, though folklore suggests it’s actually a nymph who was turned to stone. 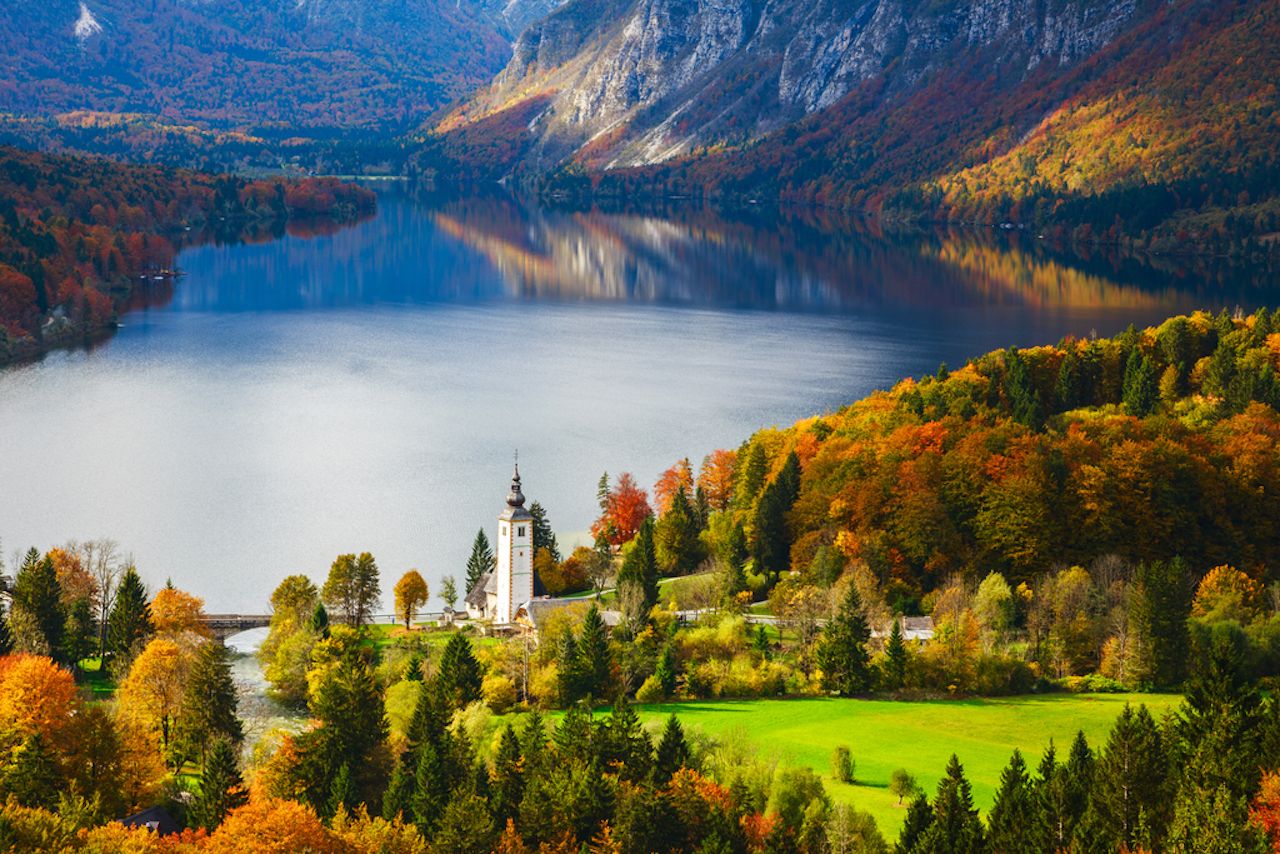 While Lake Bled, Slovenia’s most popular lake, is lovely, we recommend heading to Lake Bohinj, where you’ll find a more peaceful, remote, and beautiful setting — in a rugged, natural way. Lake Bohinj’s water is a deep blue-green shade, reflecting the surrounding mountains that are blanketed in coniferous forest. A ride in the cable car up to Mount Vogel gives you a completely eye-opening aerial perspective on just how vast this glacial lake really is.

Aside from admiring its impressive size and picturesque looks, one of the best parts of visiting Lake Bohinj is that there are so many ways to spend time in nature. You can easily fill three or four days hanging out on its banks, swimming, hiking, cycling, kayaking, stand-up paddleboarding, or canoeing. If you’re an adventure seeker and seriously short on time, we’d skip Bled altogether and make the most of Bohinj. Controversial, maybe, but honestly worth considering.

4. Kočevje aka the Bear Forest 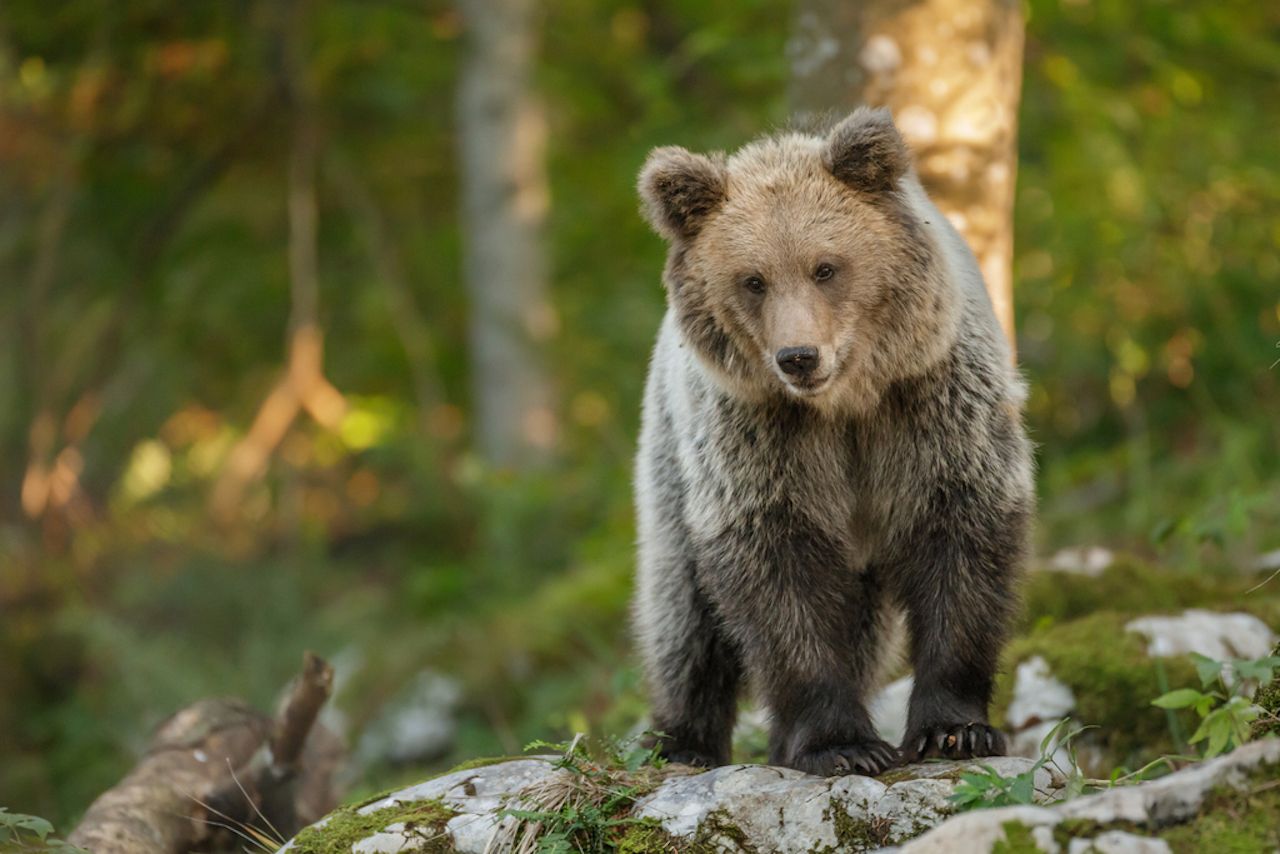 Way down in the south of Slovenia is the Kočevje region, an area of unspoiled, pristinely wild forests of mostly beech and fir. These enchanting woodlands are UNESCO protected, and it’s easy to understand why. Human interference has been seriously limited — there are even some entirely virgin forests where entry is strictly prohibited — and the area is far from the country’s well-trodden tourist routes. Thanks to this, it feels secluded and tranquil on the hiking trails, and you’re unlikely to see other people during your walks.

The residents of Kočevje’s forests attract a good deal of attention: The area has one of the highest populations of brown bears in Slovenia and the rest of Europe. The bears are famously elusive and shy, so you’re still unlikely to bump into one. If you do want to try a spot of bear watching, connect with a local guide who can ensure it’s done safely on the proper trails — and with minimal disturbance to the animals.

While you’re in Kočevje, check out the majestic Queen of Rog near the Rajhenav virgin forest. It’s one of the country’s tallest fir trees, causing you to strain your neck as you attempt to take in all 170 feet. Four grown men struggle to get their arms around the trunk, which explains the tree’s less complimentary nickname of Debela Jelka, or “the Fat Fir.” 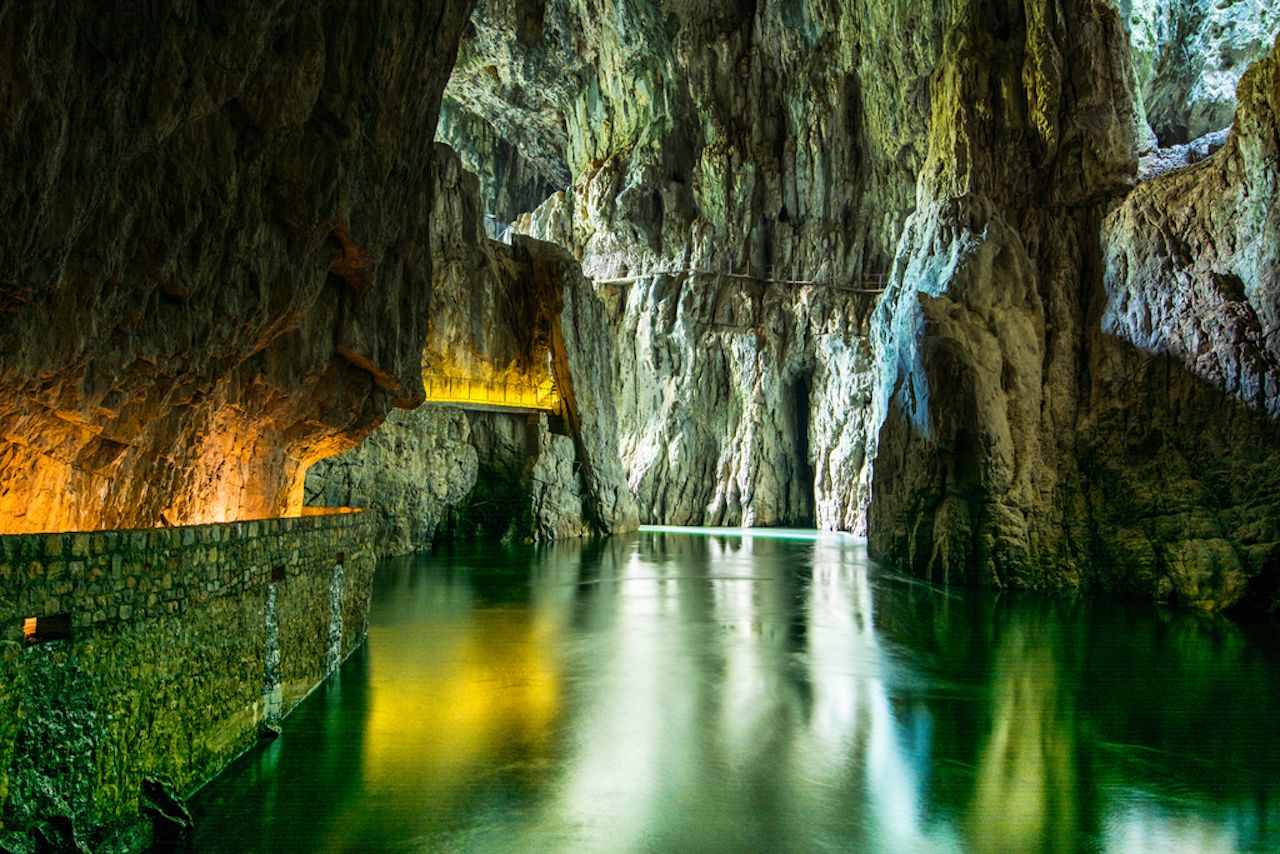 Slovenia is just as interesting for nature lovers on a subterranean level as it is overground. A series of spectacular karst cave systems lie underfoot, including the Škocjan Caves. Like the forests of Kočevje, they have UNESCO accreditation, labeled as a World Heritage site.

Erosion and corrosion of limestone rock caused by the Reka River are responsible for the nearly four-mile series of caves, dotted throughout with stalagmites and stalactites that have been growing steadily over thousands, even millions, of years. Lots of the rock is white in color and glitters brightly, even under the dim lighting. Today, the river rushes through a huge underground canyon, producing an immense sound that backdrops guided walks around the open-to-public areas.

The highlight of a tour around the Škocjan Caves is entering the largest discovered underground cavern in Europe, Martel’s Chamber. It’s otherworldly, like a set straight out of Lord of the Rings, except this is real and formed entirely by nature. Your tolerance for heights determines how quickly you cross the Cerkvenik Bridge, which hangs over one of the highest points in the cavern. Look out for the original pathways laid down by the early explorers of the caves, too. They make you glad to be standing on the safe and stable tourist paths of today.

OutdoorHere’s Why Montenegro Is an Outdoors Paradise
Tagged
Hiking National Parks Insider Guides Slovenia
What did you think of this story?
Meh
Good
Awesome