The world has a major plastic problem. More than 380 million tons of disposable plastics are produced each year, according to Plastic Oceans International, with some 95 percent ending up as waste. About 50 percent of that is single-use plastic, much of which isn’t accepted at recycling stations — because its flimsy consistency jams sorting machines, it may be a shape the machines can’t process, or the plastic isn’t high enough quality to break down into recyclable pellets. The result is hundreds of millions of tons of plastic clogging landfills and waterways worldwide.

A Massachusetts startup is on a mission to change that by making it easier and cheaper to recycle cheap plastics. After a 35-year career in supply chain consulting, David New founded Obaggo to make plastics recycling something that is actually doable for businesses and private citizens.

At first glance, New’s product looks a lot like a household trash bin — small, rectangular, and with a slot for insertion. Users insert common plastics like grocery store bags, packaging film, and other loose flimsy plastics, and Obaggo works by compacting these loose plastics into a thin disc, called a puck. It then ejects the puck and users add it to their curbside or drop-off recycling, or wherever plastic recyclables are accepted.

“Generally speaking, Obaggo is for people who find that they have a lot of plastic bags and film in their household and want a convenient way to recycle it,” New told Matador. “Bags and film of the right types are good raw materials to make into new products.” 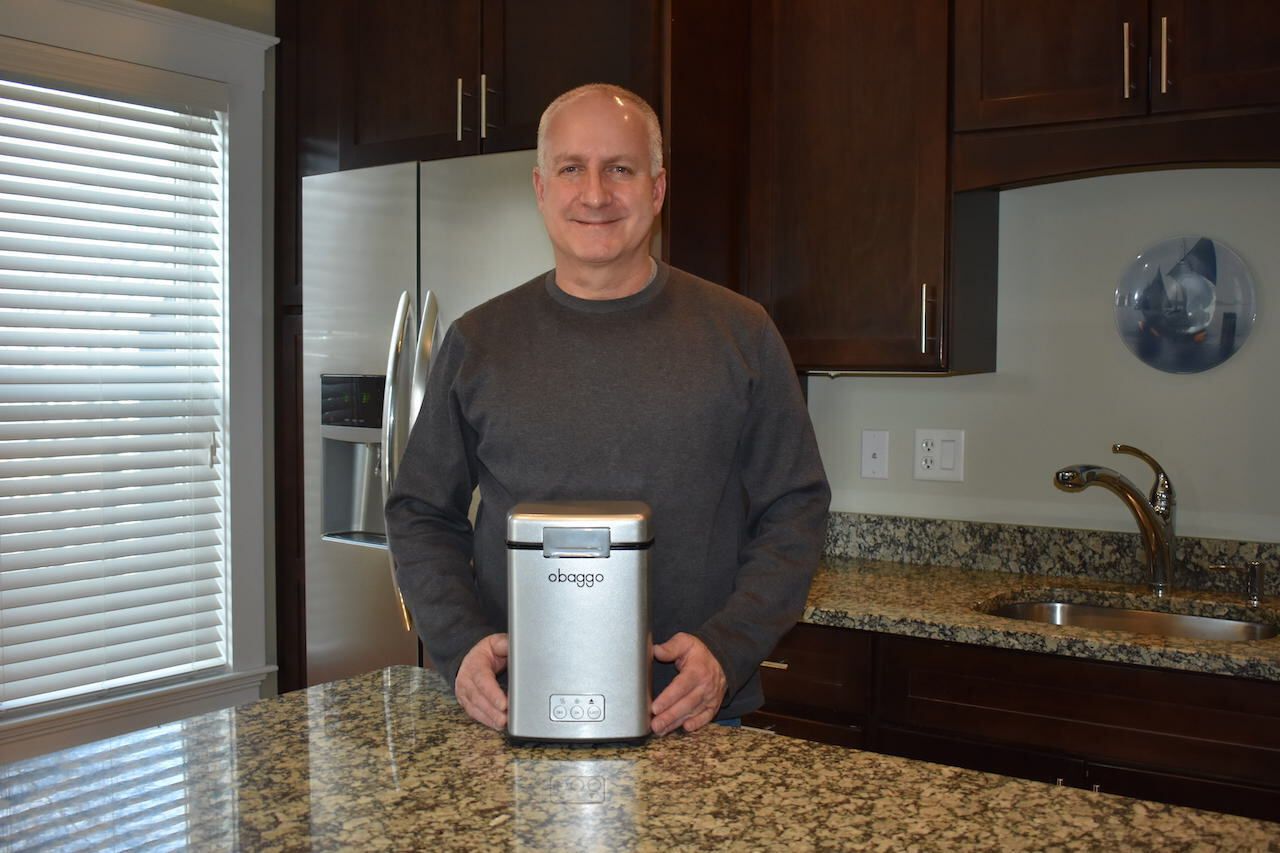 Another exciting avenue in which Obaggo could be embraced is in offices, as well as service businesses like restaurants, hotels, and airports — places where loose plastics are a part of everyday business operations. This could help travelers produce less waste both on the front end — what they see and consume — and on the backend. For example, restaurant kitchens typically cover food pans with plastic wrap at close and many food items come wrapped in plastic that is immediately tossed into the trash can upon use.

“I definitely see hotels and restaurants, and businesses of all kinds, adopting Obaggo as a way to get their plastic film into the recycling stream in an economical way,” New says. “Densification transforms the economics of recovering plastic film, so it helps no matter who does it.”

A simple sign posted in workspaces can explain which plastics can be put into the Obaggo.

“The critical concern, however, is that it is the right material (polyethylene, plastics labeled #2 and #4, generally speaking), and that it is clean and dry and free of food contamination,” New says. “So if Obaggo is used in the workplace, it needs to be used by people who know the basic rules I just mentioned.”

On that note, users do need to be educated on which types of plastic can be recycled with Obaggo. The company lists common items on its website, which in addition to plastic bags and film include cereal box liners and clothing bags. When traveling, I often find myself collecting small pieces of plastic trash — food wrappers, bags — in my pack with the hope that I’ll find a recycle station along the way or bring it home and combine there with other plastics for recycling. Sadly, neither tend to happen, and more often than not that plastic ends up in the trash, often because my local recycling center doesn’t accept certain types of plastics despite them being labeled recyclable. New has had similar experiences and hopes Obaggo can step in to help. With this product, travelers can collect thin plastic on the road and, to coin a new verb, “Obaggo” it at home.

“When I travel, I try to recycle the packaging from items I consume if I can find a recycling bin,” New says. “Bags and film I bring back home and add it to other film and make an Obaggo.”

The company will soon launch a crowdfunding campaign to bring Obaggo to market. Sign up to be notified of when the campaign launches and when Obaggo is available for purchase.

Progress continues in the EV sector. This week, Ford said it would phase out gas-powered vehicles in Europe by 2030, The New York Times reported. The company will continue to produce them in the United States, however. Further up in the air, United Airlines is said to have ordered 200 electric “flying taxis” to shuttle passengers from city centers to airports in its major hubs, which would reduce traffic congestion at the airport and give users an emissions-free mode of transport to get there, according to Digital Trends. The company aims to have the flying taxis operational within five years.

Electric utility National Grid submitted a proposal last week to expand solar power to low-income customers in Massachusetts. The proposal outlines plans to use Community Shared Solar projects to deliver solar power as part of the Solar Massachusetts Renewable Target to help 20,000 residents lower their utility bills through solar power, without having to install rooftop panels on individual homes.

A bipartisan group of lawmakers introduced a resolution to the US House of Representatives this week that would permanently grant wilderness status protection to the Arctic National Wildlife Refuge. This would prevent future oil and gas drilling in the area, even despite former president Donald Trump’s sale of exploratory leases for the area merely weeks ago.

Sustainability7 Majestic Arctic Wildlife in Danger From Global Warming
Tagged
News Sustainability
What did you think of this story?
Meh
Good
Awesome