In his book, The Cuisine of Hungary, restaurateur and food writer George Lang writes that, “Somewhere along the line the Hungarians hit on the holy trinity of lard, onion, and pure ground paprika.” Kolbasz — the Hungarian word for sausage — might be considered an honorary fourth pillar in the pantheon of Hungarian cooking: It appears in stews, on appetizer platters, sliced on bread with a side of pickles and mustard, and at all meals of the day — including breakfast.

If paprika is one of the pillars of the holy trinity of Hungarian cuisine, then it holds special power in the realm of kolbasz. Almost every single variety of Hungarian sausage is seasoned with paprika, imbuing each with a deep red color and mildly spicy flavor. Paprika is the foundation of Hungarian sausage seasoning, and smoking, drying, and curing is the preferred cooking method (though you will find some kolbasz that are served fresh). But kolbasz are versatile, and you’ll find recipes that call for pan frying, grilling, and roasting sausages over an open fire.

Hungary is home to a thriving neighborhood market culture, where Hungarian people shop for groceries and traditional ingredients like sausage, salami, and other deli meats. Butchers stalls are commonplace in these markets, like the one in Budapest, called Kórház Utcai Market. These purveyors are where you can find the highest quality cuts of Hungarian sausage, from the classic kolbasz to hurka (offal sausage) and szalonna (fatback and pork belly).

Most Hungarian sausage is made from pork, and you’ll find all parts from the liver and lungs to the head and the heart deployed in various sausage varieties. Mangalitsa is the heritage breed of Hungarian pig, so you may want to specifically ask for Mangalitsa sausage or look for that label on the packaging.

These are 14 of the most popular types of Hungarian sausage you should know about before a trip to the country. 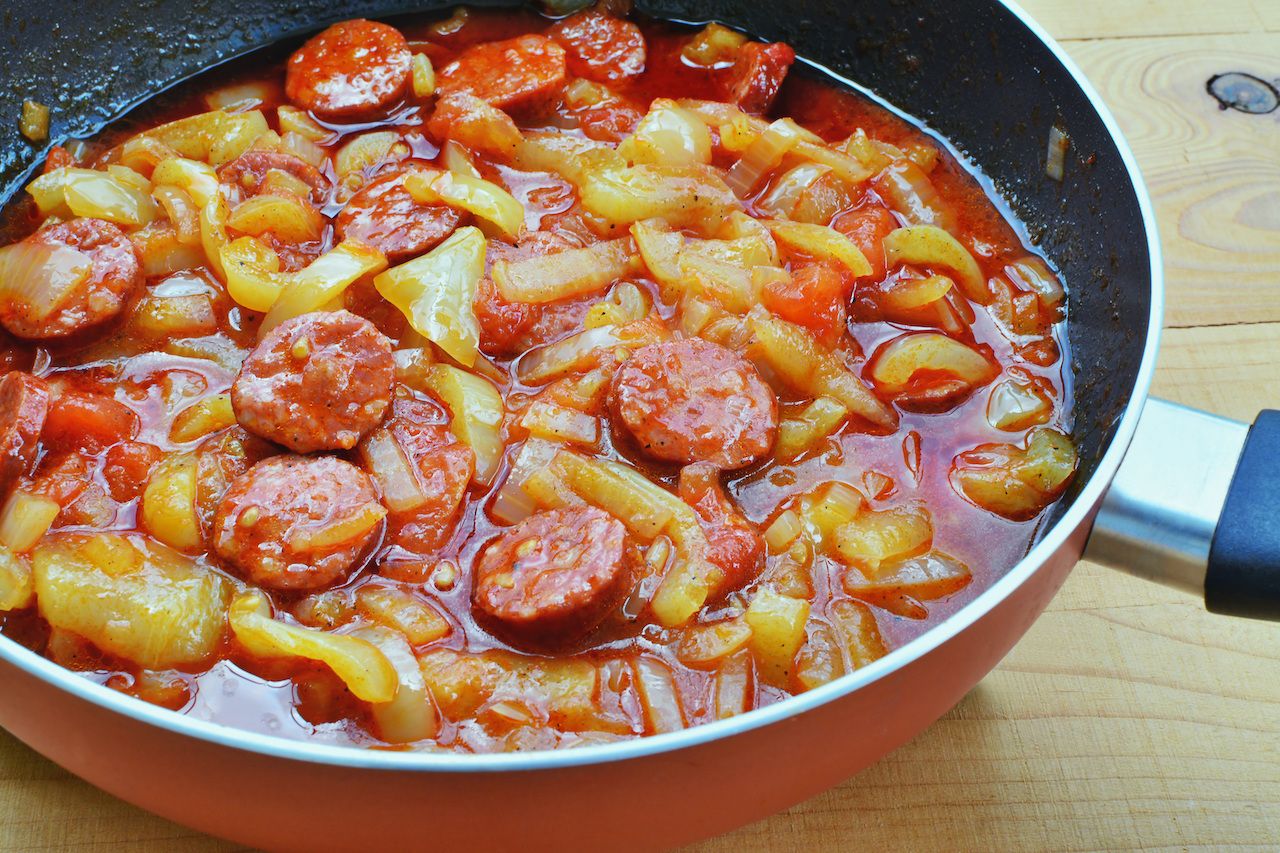 This sliced sausage is made specifically as an ingredient in a dish called lesco, a stew of onions, tomatoes, and banana peppers. True to Hungarian tastes, it’s heavily seasoned with paprika. Lecso usually incorporates sausage, but it’s also not uncommon to see it served with scrambled eggs.

Named for the city of Gulya, this smoked sausage is seasoned with paprika, pepper, caraway, garlic, and salt. A combination of pork meat and fat, the sausages are smoked over beech wood then hung up to dry and cure. Gyulai kolbász is almost always sold in pairs and is a common ingredient in Hungarian potato and egg casserole. This type of Hungarian sausage also enjoys PGI certification. 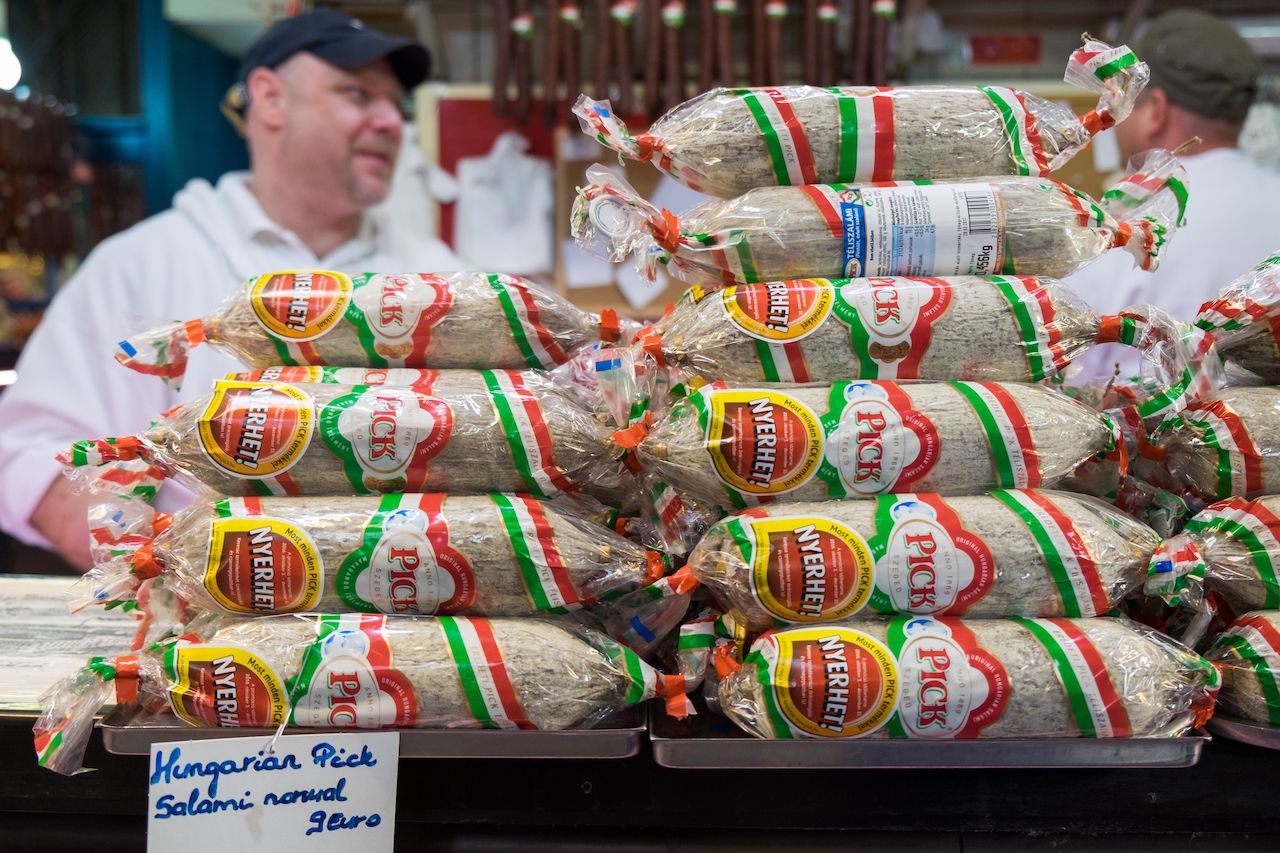 Covered in a white model casing that appears during the drying process (known as noble mold), this cylindrical smoked salami is flavored with allspice and white pepper. The name means winter salami, a reference to that fact it was once prepared in the colder months. In 2007, Budapesti téliszalámi received PGI status. Traditionally, winter salami is made only from Mangalitsa pork, a breed of Hungarian pig. Pick and Herz are the two most iconic salami producers in Hungary.

Typically produced in the town of Békéscsaba, Csabai kolbász is similar to Gyulai kolbász, but it’s much deeper red in color thanks to amount of paprika used to season it, and it’s also far spicier. 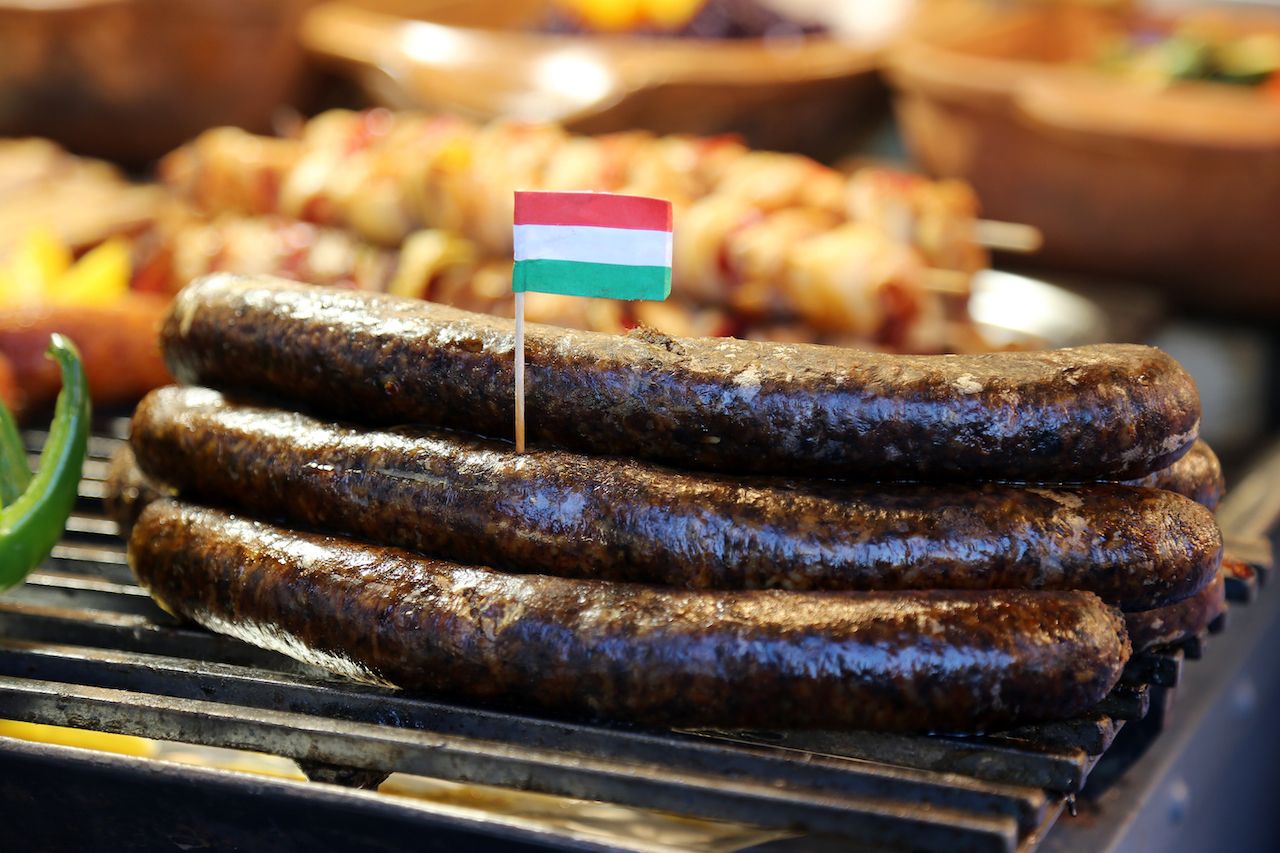 Hurka is a Hungarian offal sausage prepared using the liver and lungs of the pig, and sometimes pork snouts combined with rice and onions. Veres hurka adds blood to the mixture. Fresh blood sausage is often pan-fried or grilled and served with pickles on the side. Some Hungarian people say veres hurka is best paired with a cold beer. Another variety of hurka is majas hurka, which is made exclusively from the pig’s liver.

The name of this sausage translates to “homemade,” and perhaps fittingly the recipes vary depending on who is making it. Generally, hazi kolbasz is made from pork shoulder, and seasoned with cloves, lemon zest, cumin, cumin, and paprika. 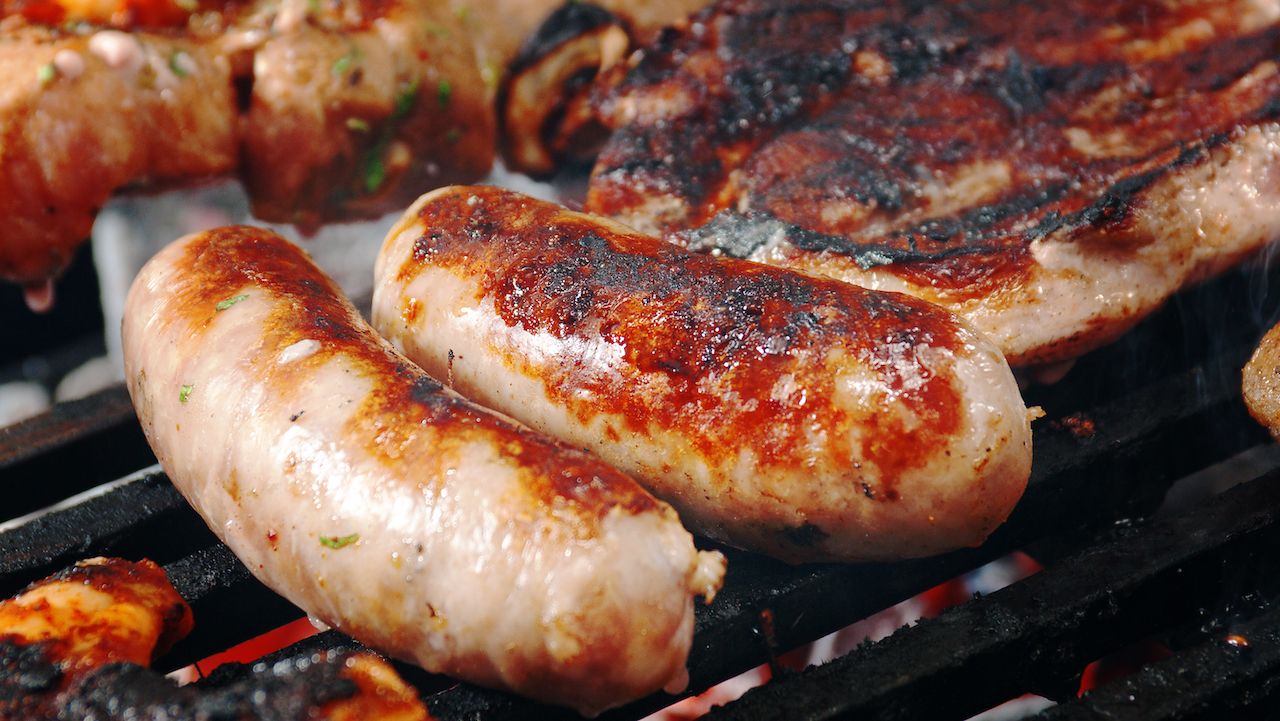 This orange pork or beef sausage is named after the city of Debrecen, where it originated. Seasoned with marjoram and paprika, which gives this sausage its rich color, Debrecener can be baked, broiled, or fried. You can find versions that are both smoked and unsmoked.

This long, thin sausage has the chewy texture of jerky, and like most other Hungarian sausages gets intense flavor from smoky paprika. It’s sometimes compared to a Slim Jim. Interestly, the term “cserkész” means boy scout in Hungarian. 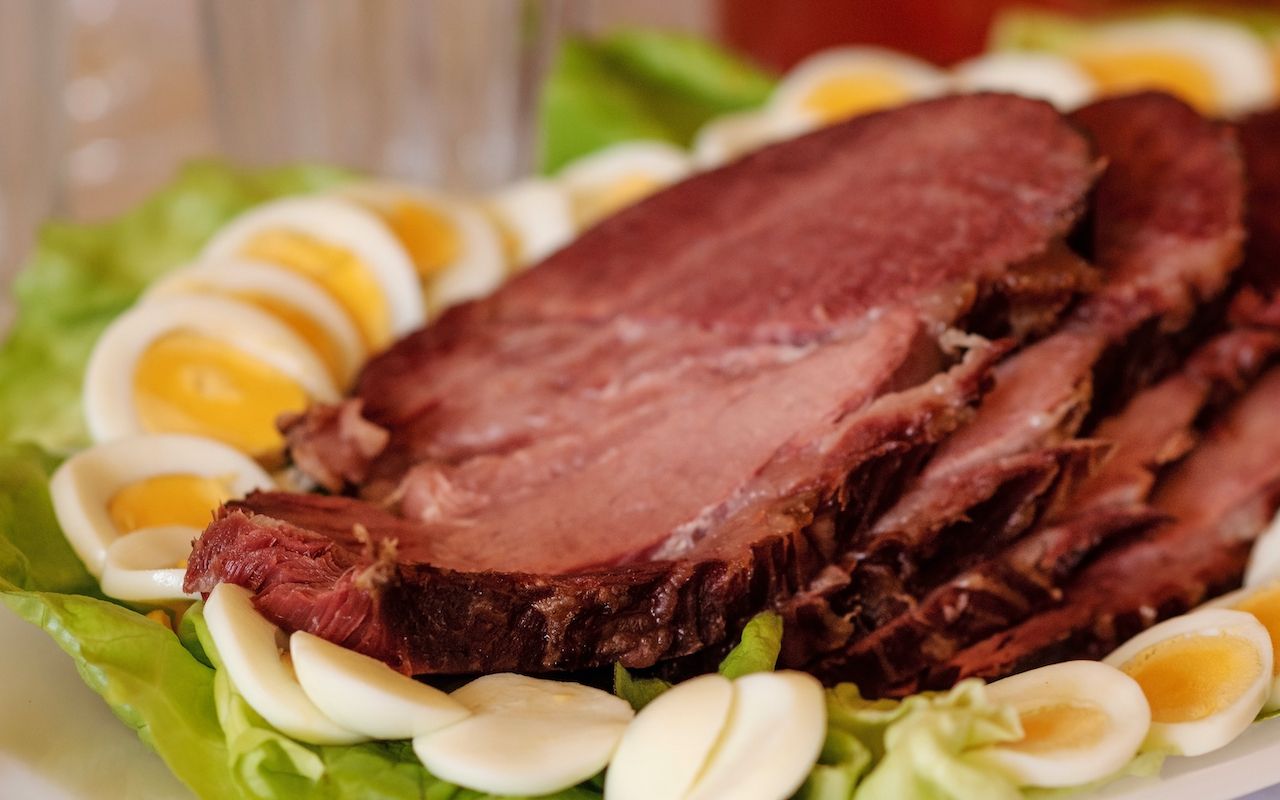 In Hungary, sonka refers to smoked ham. Sonka is traditionally served on Easter similar to many Easter traditions in North America. But sonka can also be sliced and eaten as an appetizer: One purveyor suggests eating sliced sonka with melon, a snack that might bring to mind Italian prosciutto and melon.

Another type of Hungarian salami that’s covered in noble mold. The city of Szeged has been making salami for around 140 years. The microclimate produced by the nearby Tisza river imparts this variety of salami with its distinct flavor. In 2007, szegedi szalámi received Protected Designation of Origin (PDO) status. 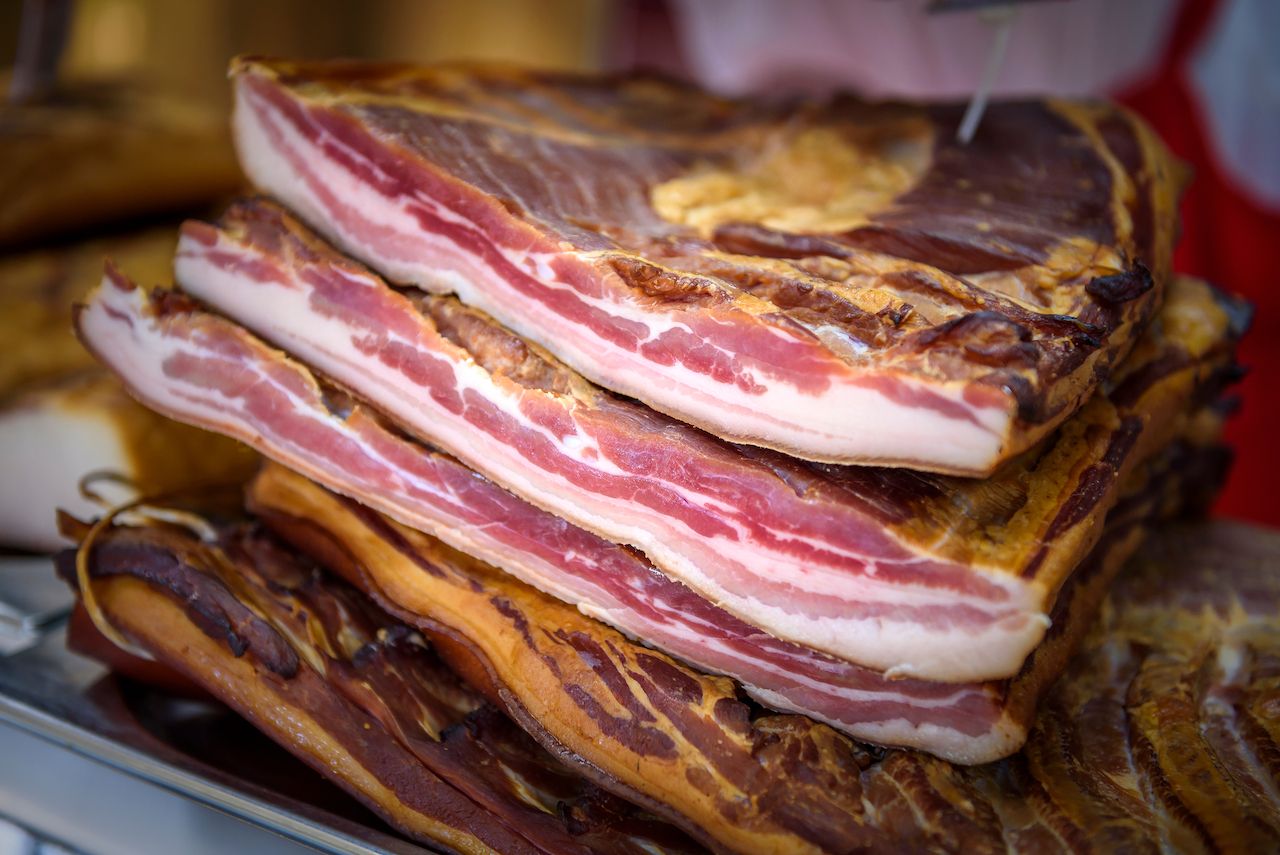 Similar to bacon, szalonna is fatback made from smoked and cured pork fat with the rind still attached. In Hungary, there are at least 20 different types of szalonna, but generally it’s sautéed, seasoned with paprika, and added to stews and soups. Another popular way to cook szalonna is to spit roast it over an open fire. Thinly sliced pieces of szalonna are also sometimes eaten on top of sliced bread with tomatoes. Csemege szalonna, for instance, is salted pork fatback with hardly any trace of meat while kolozsvári szalonna is salted and smoked pork belly.

Disznósajt technically means pork cheese, but it falls into the category of a head cheese, a type of terrine or meat jelly that combines different parts of the pig, including the head, tongue, heart, and ears. The gelatinous mixture is pressed into the pig’s stomach then dried and smoked. Disznósajt is a popular snack in Hungary served cold in rectangular slices.

This is one Hunagrian sausage that isn’t aged but served fresh. Sütőkolbász is baked or roasted in a frying pan and is then topped with mustard and served alongside sliced bread and pickles. Like the many varieties of kolbasz, it’s seasoned primarily with paprika.

The roots of virsli, a variety of frankfurter, stretch back to Vienna. Hungarians made this style of smoked sausage their own, however, by serving them at breakfast or in a vegetable stew called főzelék. Virsli can be fried or boiled and are usually accompanied by a mustard dipping sauce. The most popular variety is called Bécsi virsli, made from beef and pork.

Food + Drink27 Types of Fermented, Smoked, and Spiced German Sausages You Need To Try
Tagged
Food + Drink Hungary
What did you think of this story?
Meh
Good
Awesome

33 Awesome Expressions To Know Before You Travel To Hungary

12 Commandments for Living in Hungary

How To Save Money on Your Trip To Budapest

6 American Habits I Lost When I Moved To Hungary

How 'Ruin Bars' Became the Hottest Drinking Spots in Budapest