Ulleungdo is a volcanic island 75 miles east of South Korea, a dream for any off-the-beaten-track traveler. The island has long attracted South Koreans who appreciate its dramatic volcanic cliffs and rock formations, primeval forests, and crystal clear water. Hiking is very popular, meaning some trails get congested during the peak season. The surrounding ocean, however, is often a lot emptier — making snorkeling a great way to explore parts of the island that the average tourist won’t see. 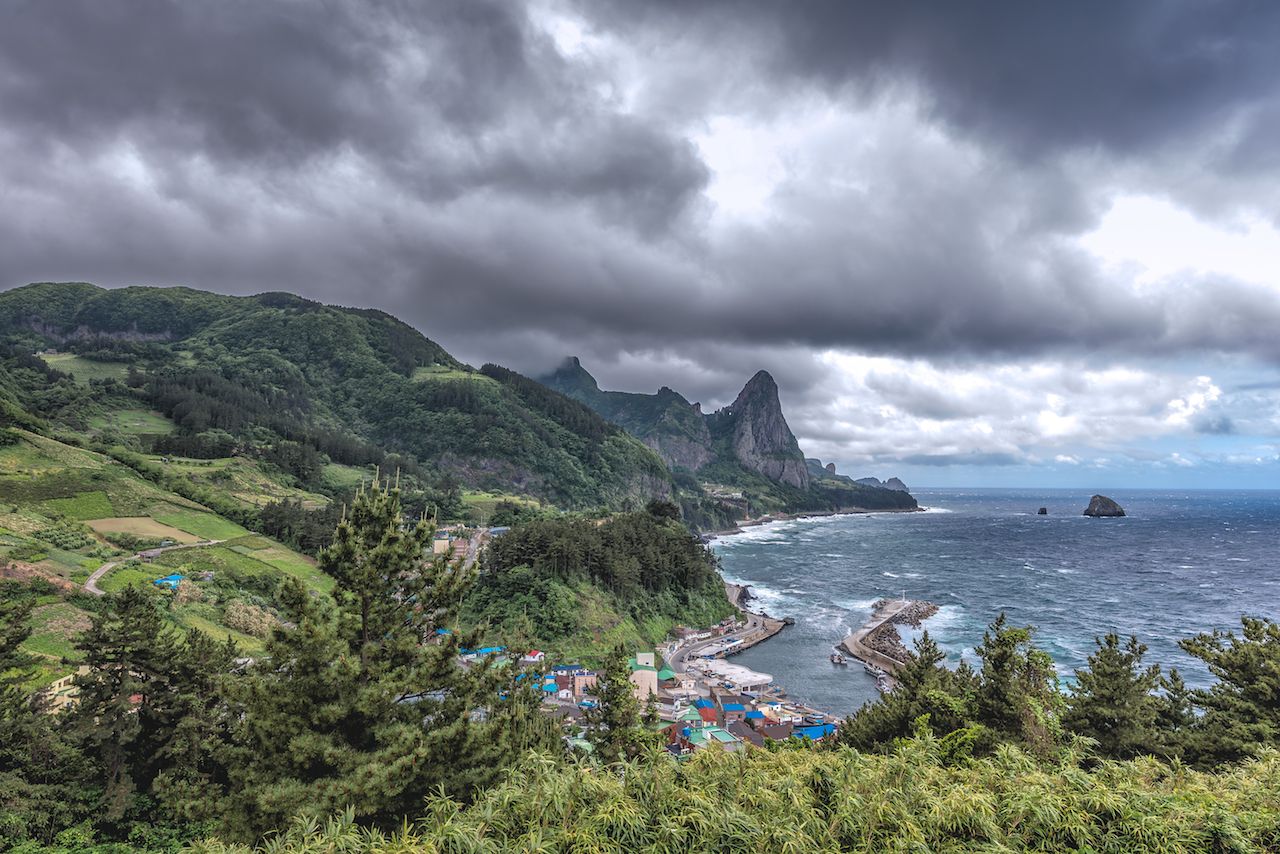 Ulleungdo is sometimes called Korea’s mysterious island. This may have to do with its distance from the mainland or its eerie rock formations, which reflect the island’s volcanic origins. Ulleungdo is essentially the peak of a massive volcano that plunges downwards to the sea floor.

That topography, though, makes for some great snorkeling. Beaches drop off quickly to a depth of about 10 to 20 feet, and visibility is usually around 100 to 130 feet. During the summer months, the water temperature is around 75 degrees, making it a great break from the intense humidity on the island. 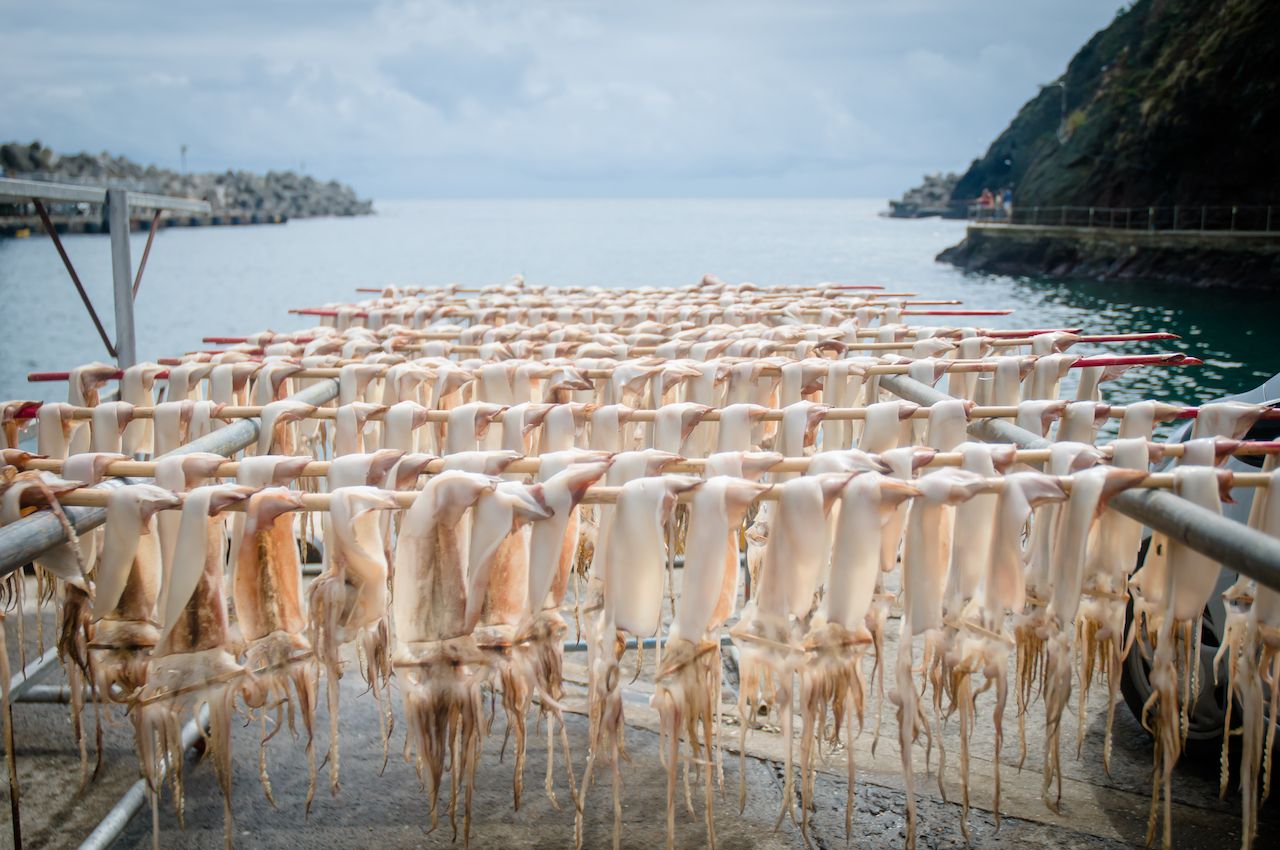 Ulleungdo is well known in South Korea for its squid, and you’ll see hundreds of squid left out to dry in all the fishing towns. If you’re lucky, you’ll see the sea creatures’ translucent bodies flitting through the water while you snorkel.

Getting around Ulleungdo can be daunting to an English-speaking traveler. There is very little English spoken on the island, but you will always find someone willing to help. Here are the top places to snorkel around the island. 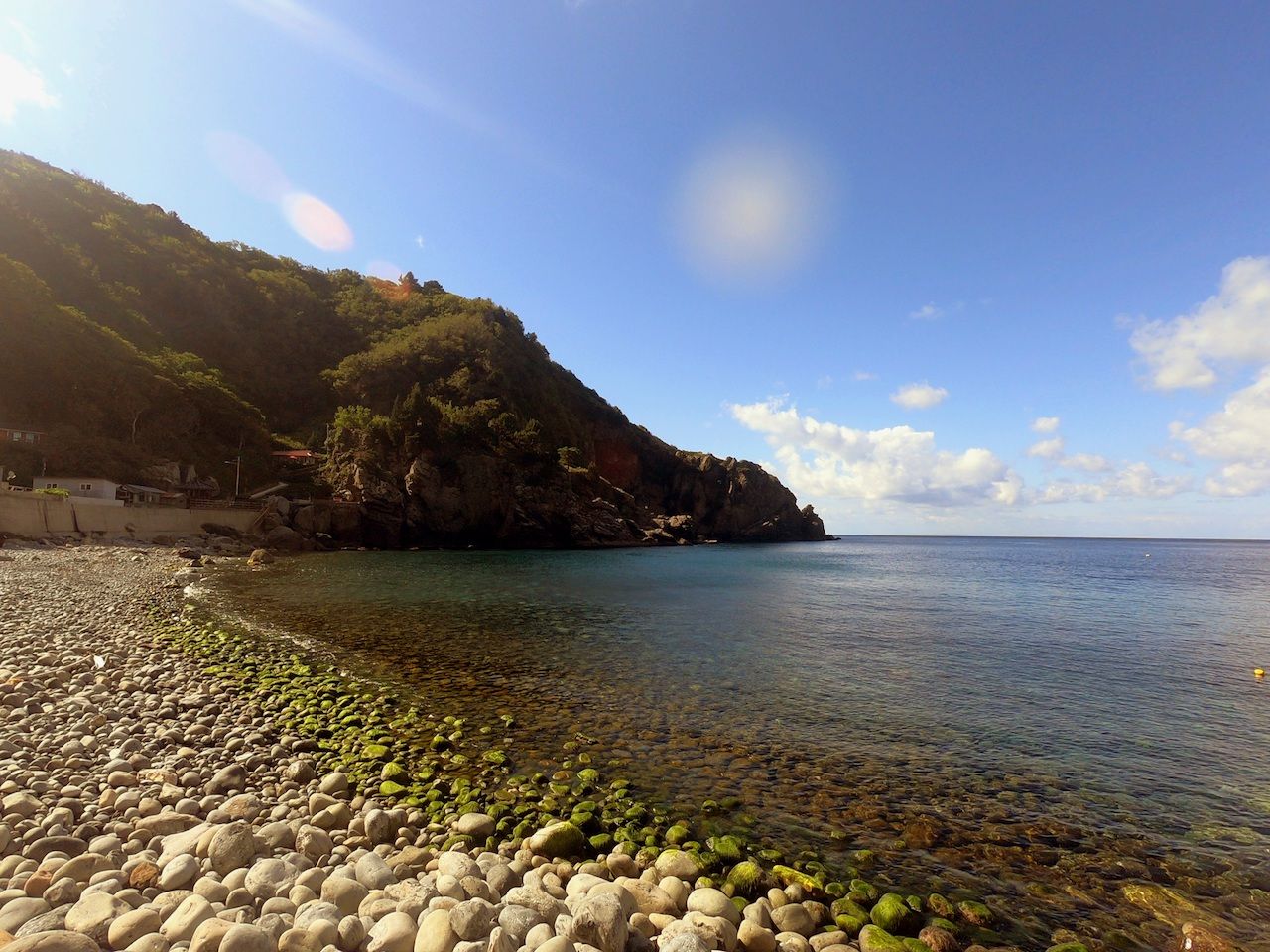 Hakpo beach is part of Hakpo village on the west side of the island, and it’s just below one of the two main campsites on Ulleungdo. Getting to the beach requires a short 20-minute walk down a steep hill from the closest bus stop. It’s the best beach on the island — in part because it’s protected by two large cliffs that jut far out into the ocean and keep the water relatively calm.

During the peak tourist season, a variety of water activities are offered, including glass-bottomed boats, banana boats, a scuba experience, and snorkeling. If you can, bring your own snorkeling gear; if you rent, you won’t get fins, and you’ll be required to wear a life-jacket. 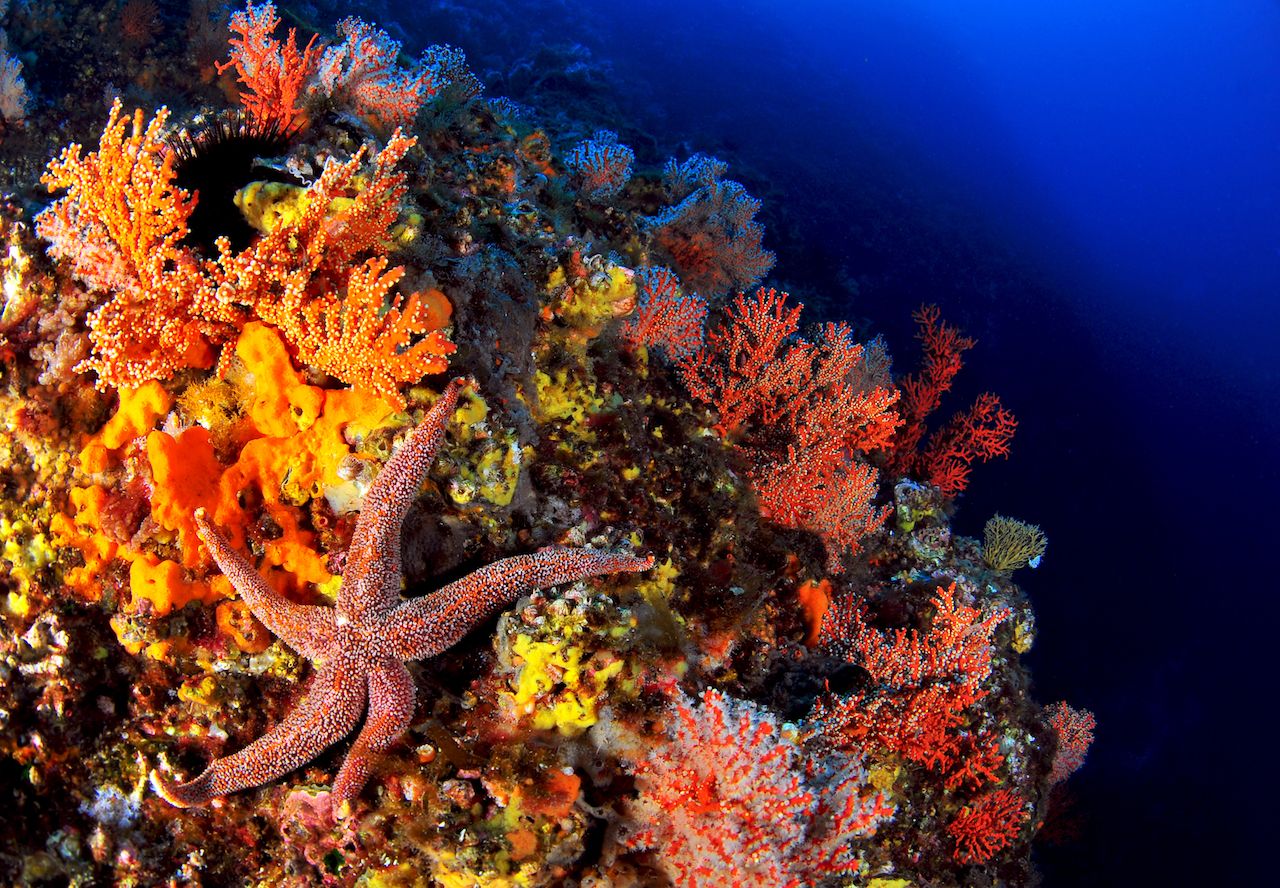 In spring and early summer, you will see hundreds of aplysia kurodai, members of the large sea hare or sea slug family. It may sound odd, but these animals can be fascinating to watch as you snorkel among the rocks and large patches of seaweed. Watch where you step, though, as it may be on a soft slug.

Like most beaches on Ulleungdo, Hakpo beach is rocky, so there aren’t places to just throw down a blanket and soak up the sun. There is a gazebo overlooking the beach that provides shaded seating and a small café that has tables and umbrellas. 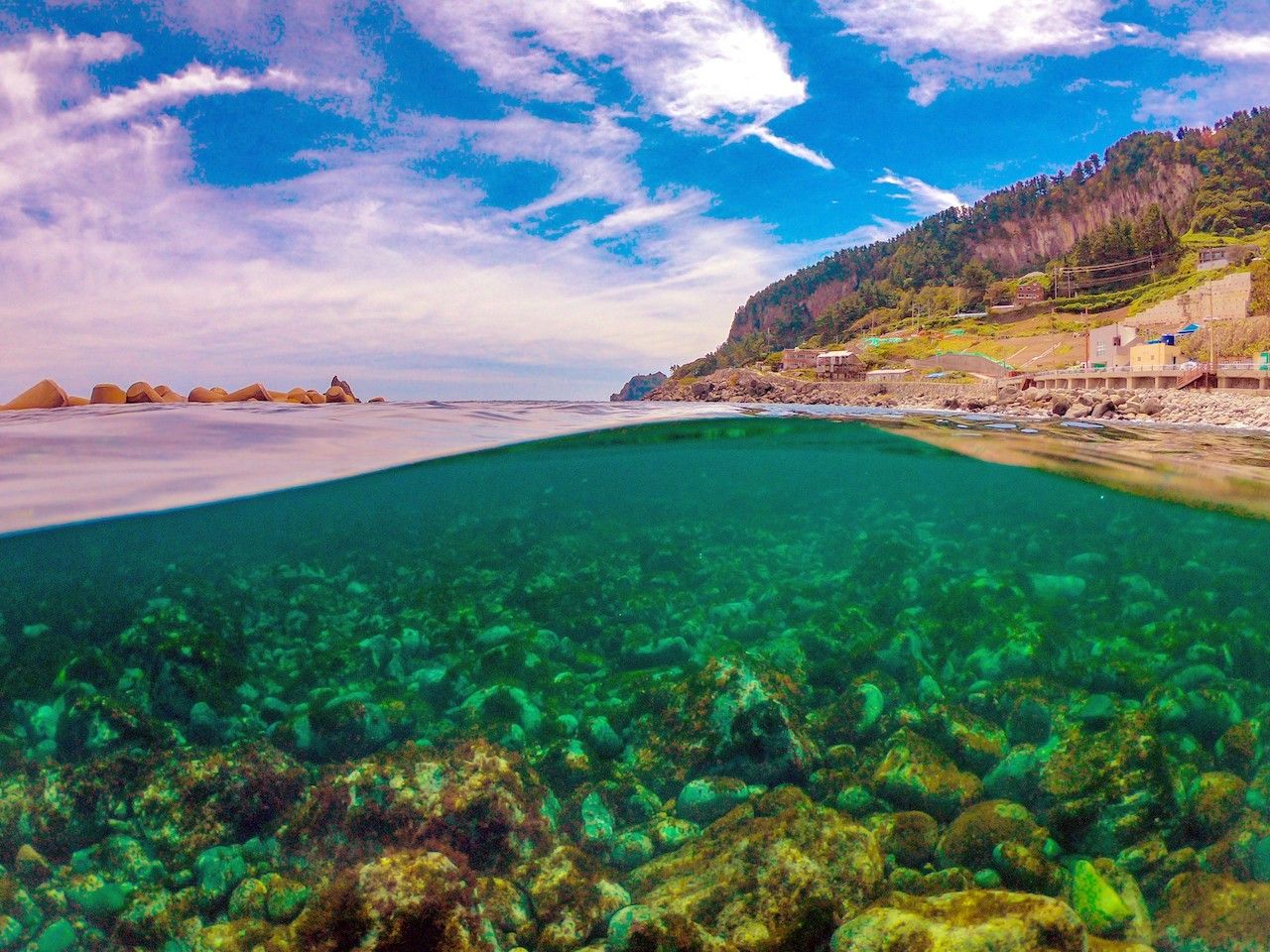 The Naesujeon Mongdol beach is on the east side of Ulleungdo. It’s much easier to get to than Hakpo beach; a short two-minute walk from the closest bus stop will get you there. It offers water activities during the summer months, but there is less space to swim. There are also fewer places to sit and relax while you’re not swimming.

That said, an advantage of the Naesujeon beach is that part of its swimming area walled off with large tetrapods, which are like concrete cones that shore up breakwaters. This means that, even when the ocean is rough around the rest of the island, this area is calm.

An interesting variety of marine life have made their homes in the spaces between the tetrapods, and if you look carefully, you’ll even see fluorescent patches of algae. Shoals of squid can be seen around this area, and it’s easy to spend several hours enjoying the warm water and marine life. 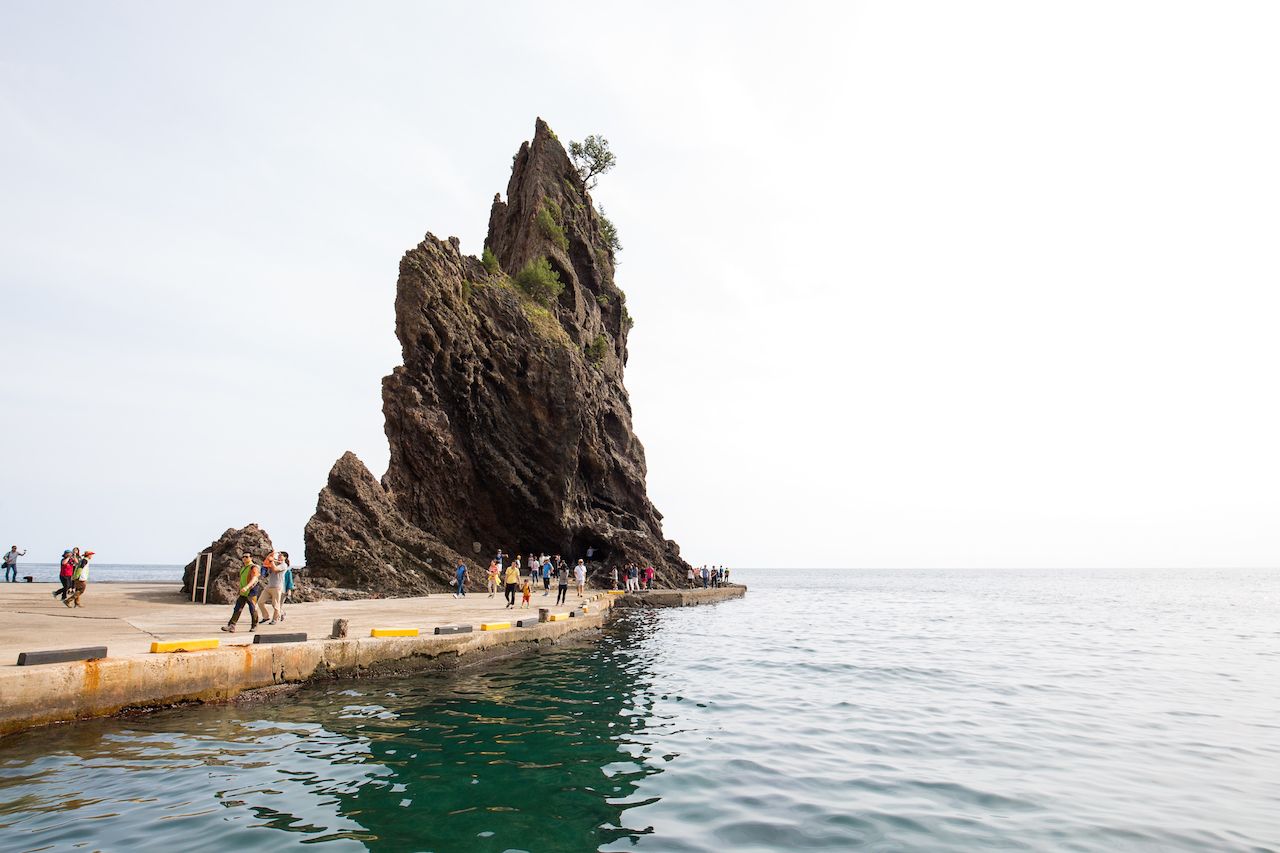 Tonggumi beach is one of the few sandy beaches on Ulleungdo. It sits in the shadow of the famous Geobukbawi, Turtle Rock in English, which rises sharply from the sea. Tonggumi is one of the many great places to view the sunset on Ulleungdo.

Apart from some fishermen standing around on the rocks, you will almost always have this beach to yourself, and you can snorkel unimpeded, exploring the depths of the island. This is another place to catch a glimpse of the elusive squid while you are snorkeling. 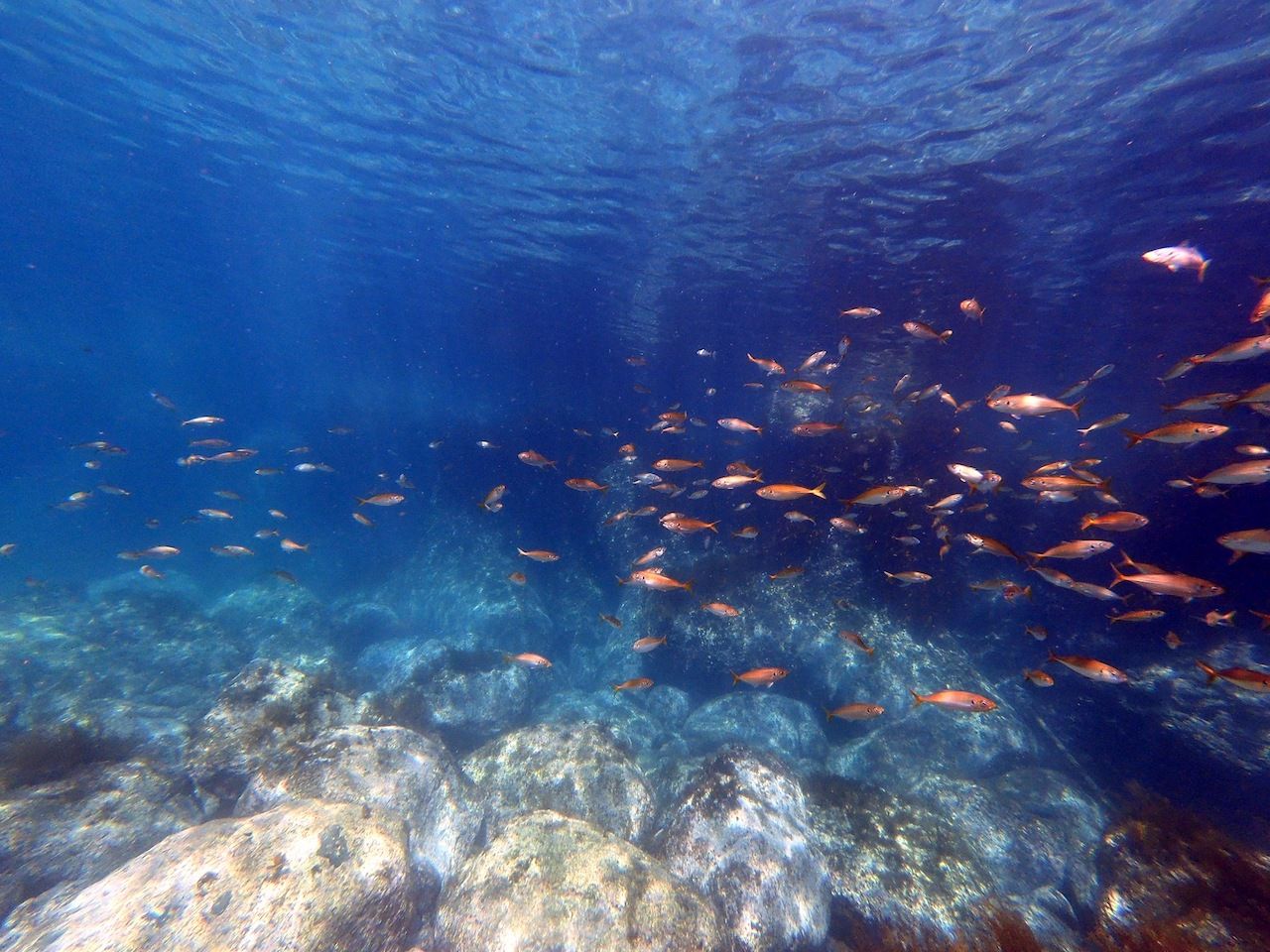 Unfortunately, the water can get very rough at Tonggumi beach. It’s not uncommon to have waves breaking onto the parking area under Turtle Rock. If the sea is too rough to swim at Tonggumi, it’s easy enough to catch the next bus and head back to Hakpo beach. 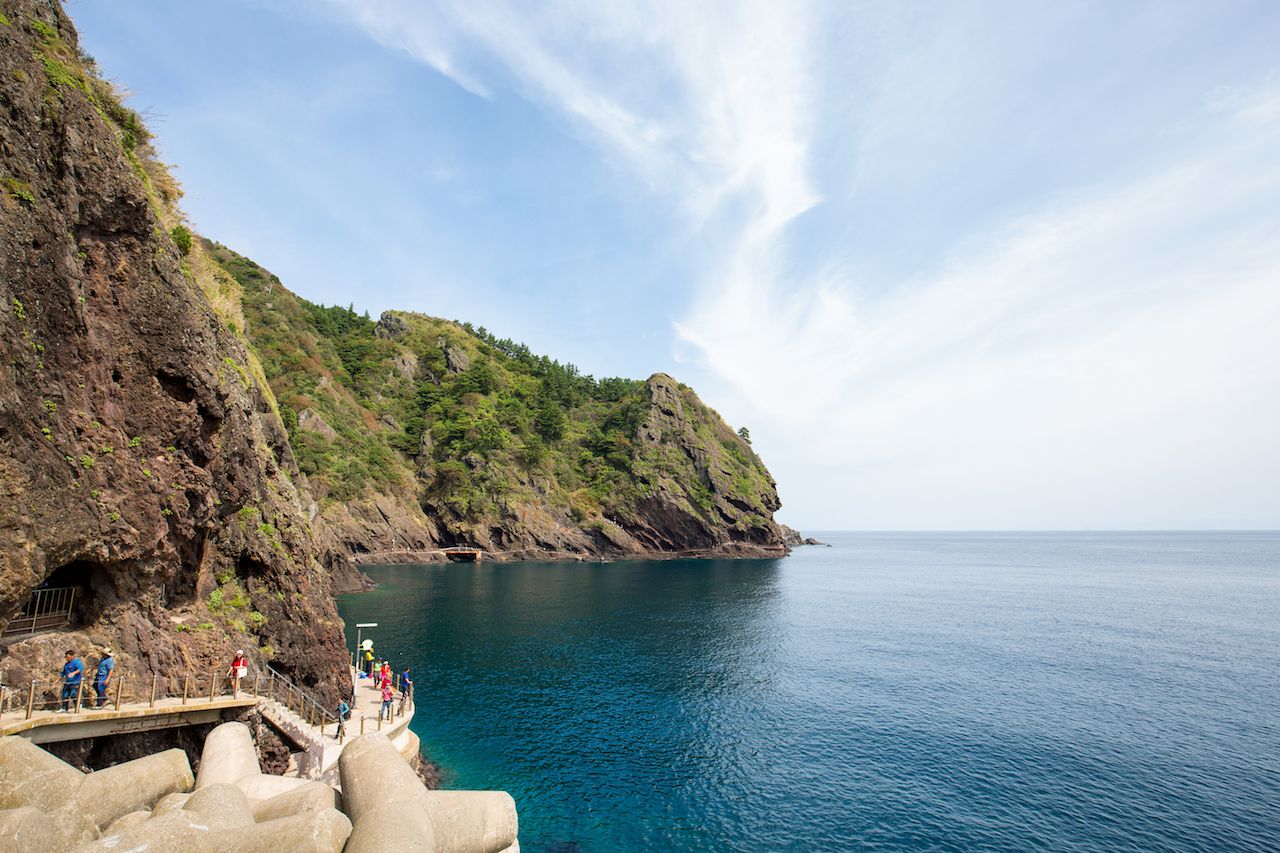 If you’re looking for more of an adventure than just snorkeling at the designated beaches, you can jump into any piece of open ocean you find. There are no restrictions to swimming on the island. On the east side, around Jeodong and Dodong, the island drops away almost immediately to around a 100-foot depth. The rock face is pitted with crags and holes that hide fish and are waiting to be explored.

Around the Dodong sea walkway, which snakes alongside the steep mountainside, you’ll see remnants of old pathways that have sunk to the ocean floor. You can swim alongside the little coves formed by years of wear from the ocean and through fun rock formations. If you swim around the walkway you’ll have many fascinated tourists waving at you and checking if you are okay. 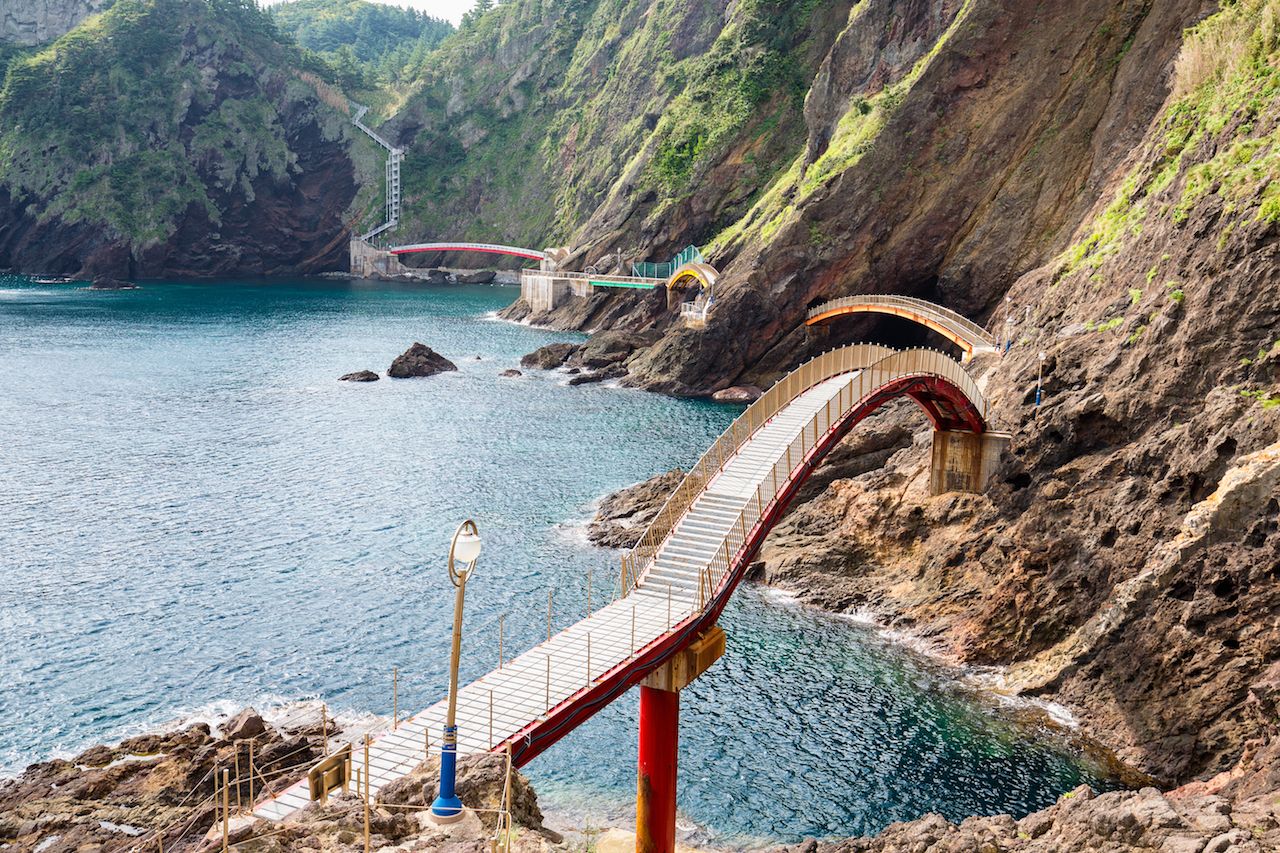 Currently, the only way to get to Ulleungdo is by a four-hour ferry ride from mainland South Korea. The ferries run from four towns — Pohang, Mukpo, Hupo, and Gangneung. During peak season it’s essential to book in advance as seats on the ferries fill up fast, and there aren’t always tickets to buy at the terminal. Booking is often only in Korean, so it may be easier to use a tour company. It takes a little extra effort, but the natural beauty of Ulleungdo, both in the water and on land, is well worth it.

Trip PlanningHow To Snorkel With the Oldest Living Things on Earth
Tagged
Beaches and Islands Diving Trip Planning South Korea
What did you think of this story?
Meh
Good
Awesome