Hostels, when you’re young, are great. Places where you pay almost nothing to stay and get to interact with like-minded young people from all over the world. Where you can share a cheap beer and discover a city with a group of strangers, staying out until sunrise with your motley crew of new best friends.

But for most of us, as we get older, the idea of sharing a bunk room with a bunch of dirty backpackers starts to lose its appeal. The cheap beer tastes cheaper, and the idea of staying out with strangers until 5:00 AM just sounds exhausting. Hotels and Airbnbs are much more inviting and now within your financial reach, too.

But sometimes in their solitude, you miss the communal experience.

As travel-happy millennials approach the age where hostels lose their luster, a new kind of hotel is trying to emulate that experience, offering upscale shared spaces, activities, and a chance to interact with locals in a way traditional hotels don’t offer — but with the comfort and seclusion of a boutique hotel. 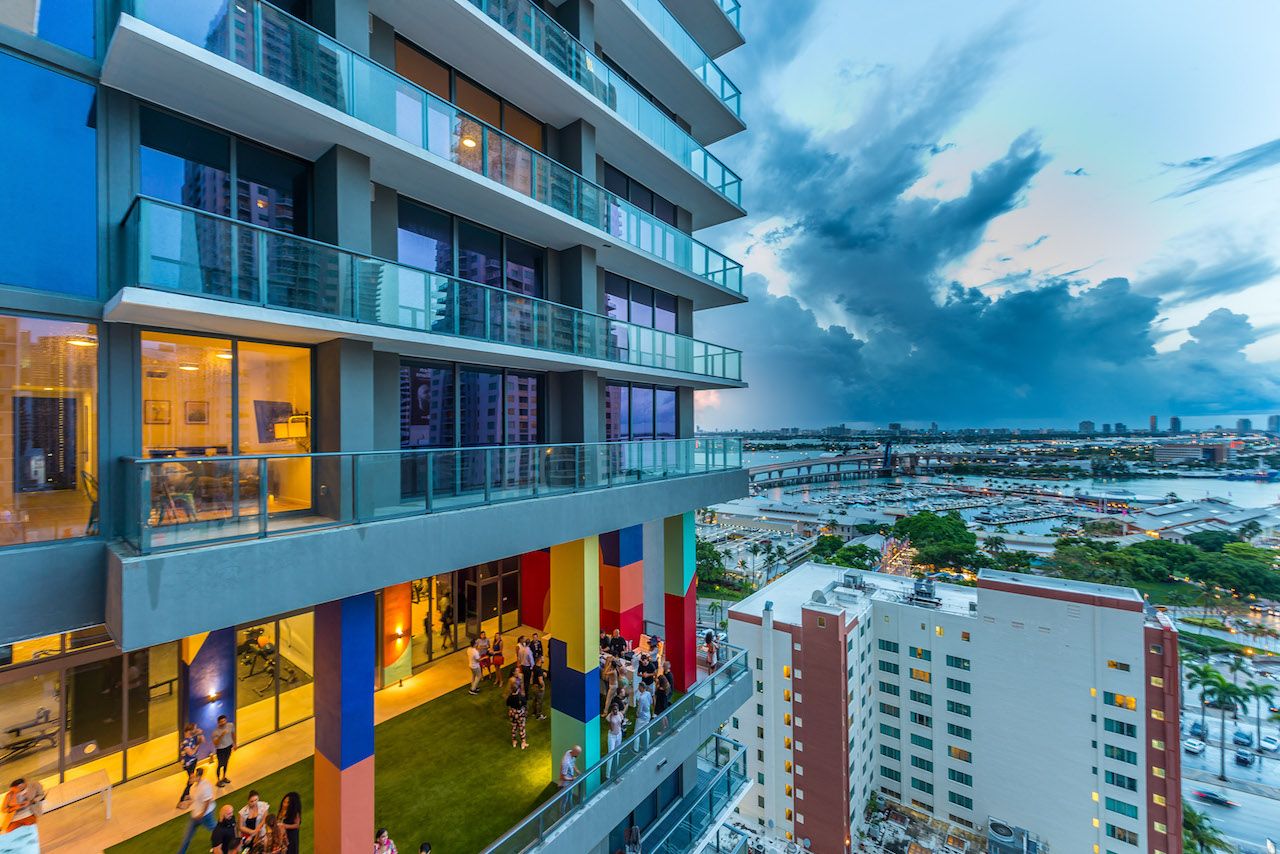 The earliest example is the Guild Hotel, which started in Austin and has expanded to Dallas and Miami with planned locations coming in San Diego and Cincinnati. The Guild is located in residential apartment buildings where hotel guests can interact with residents and feel almost like they live there.

This hotel/residential model is nothing new; plenty of luxury brands like Ritz Carlton and Conrad have been doing it for decades. But none of those does what the Guild does, allowing guests full access to residential amenities and, more importantly, to the almost-nightly group activities.

In Miami, for example, the Guild occupies four floors inside the X Miami apartments, a project that aims to recreate the college dorm experience in luxury residential units. At the X, cash-strapped young people can rent individual bedrooms in apartments without having to look for roommates and meet other people like them at one of the many building-wide programs.

Nearly every night, the building has something going on, be it a weekly Taco Tuesday buffet in the massive game room, dim sum and dumpling making classes in the communal kitchen, or karaoke nights. While the primary focus is to get residents out of their apartments, it’s also an opportunity for hotel guests to learn about the people who make up a city while doing something fun outside of their hotel rooms. 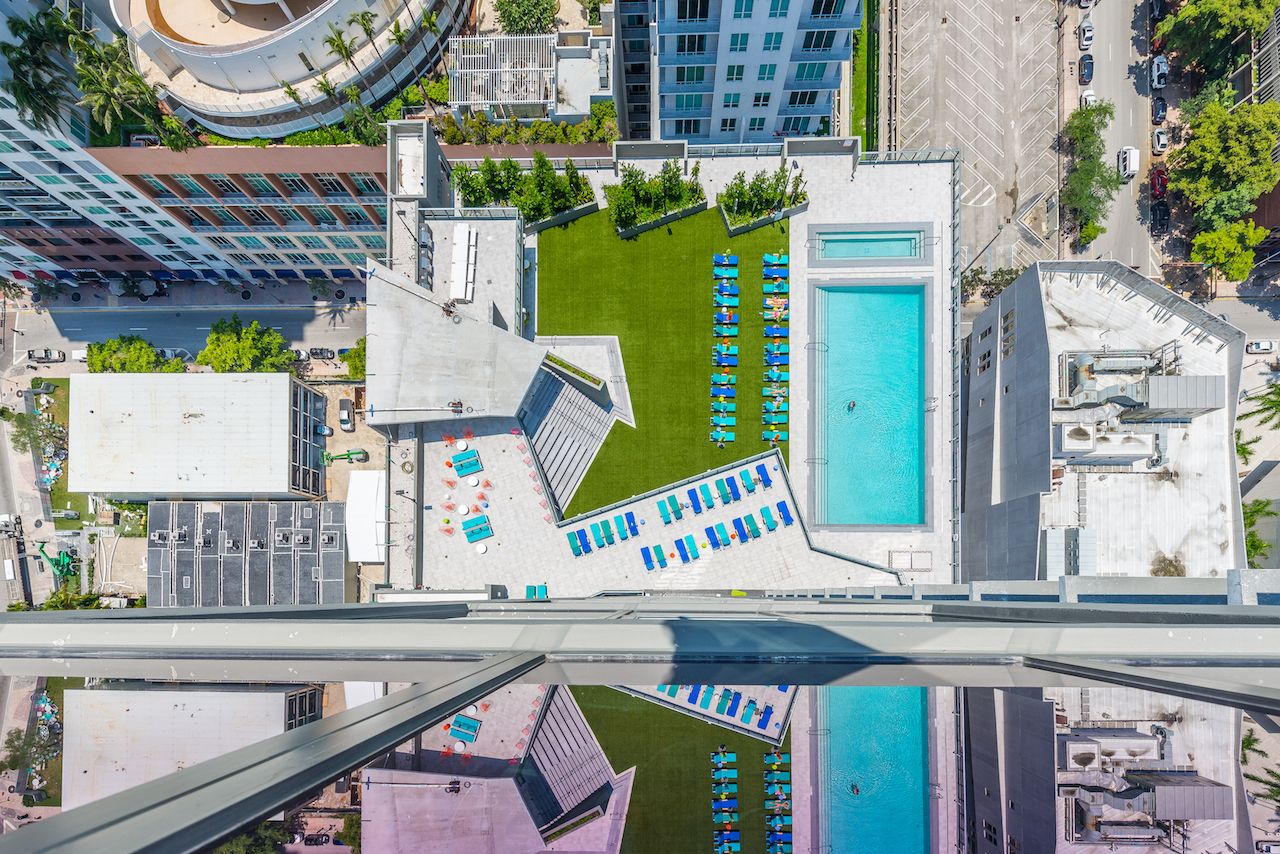 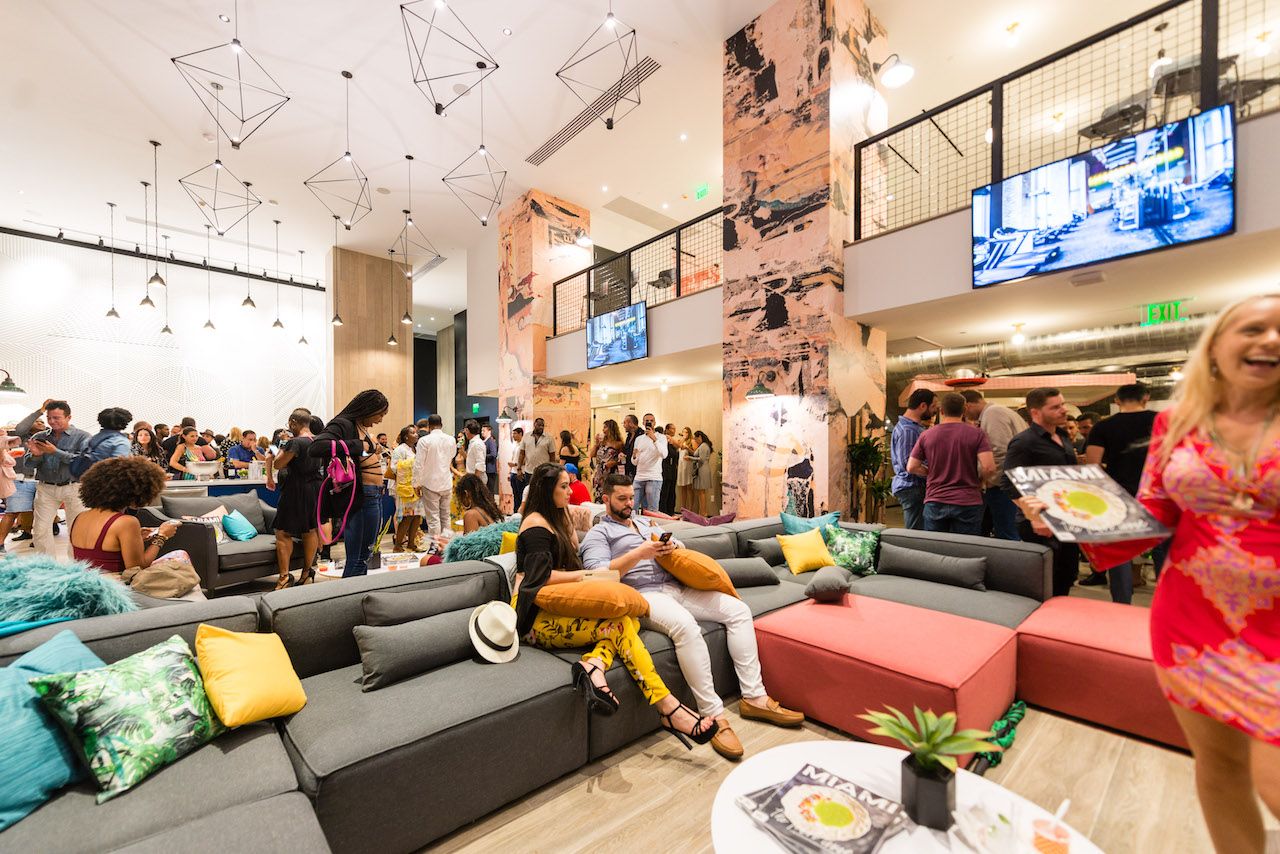 Guild guests also have access to the massive gym, with panoramic views of the Miami skyline and Biscayne Bay, along with access to the rooftop pool, which also has cabanas, giant televisions, and grills if you feel like barbecuing on your vacation. The pool deck is almost never empty, and though it’s not always the Miami pool party of your rap video fantasies, it’s still another chance to interact with locals — and catch a pretty killer sunset. 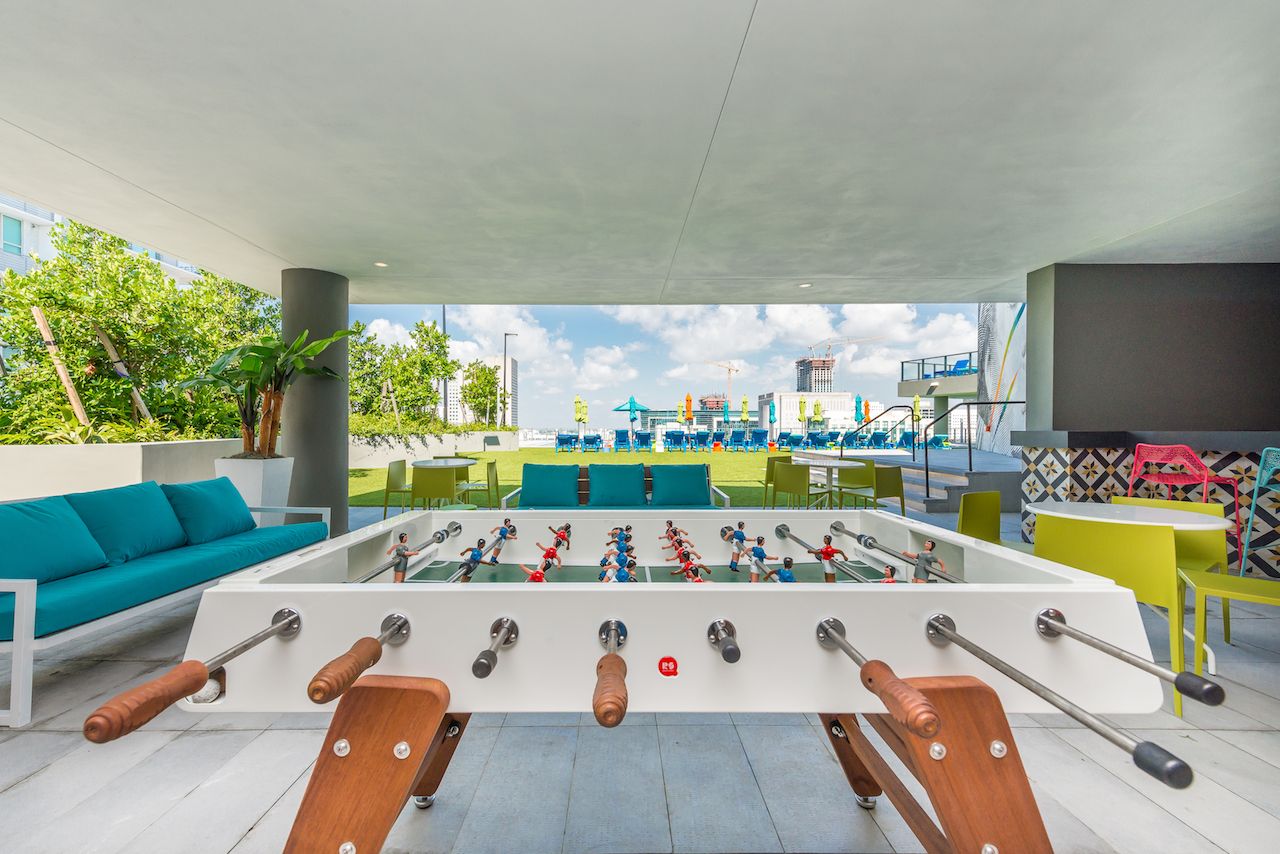 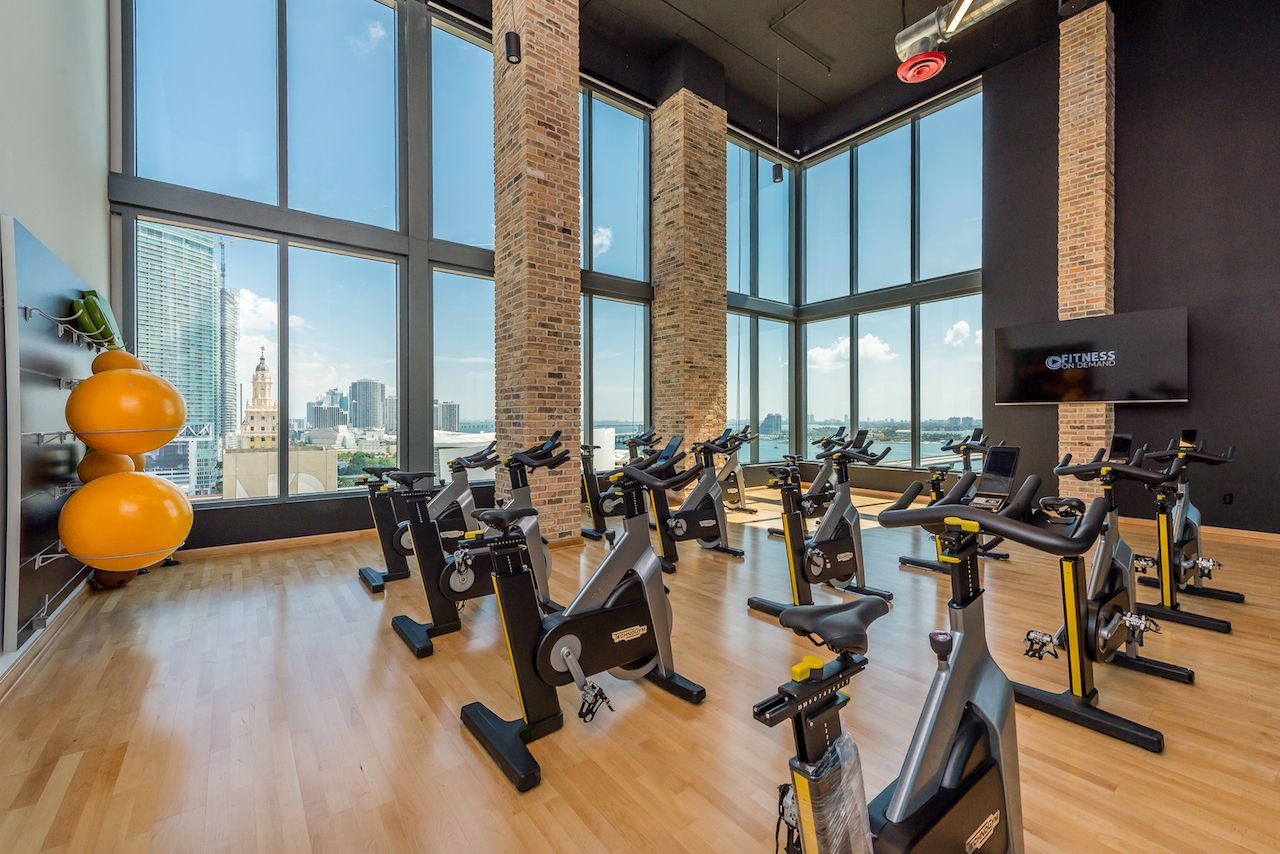 Working while traveling has become commonplace among the younger generation. At the Guild, guests have access to X Miami’s coworking floors — two levels of desks, oversized couches, and endless power outlets with two-stories worth of windows out to the city.

It feels like a WeWork set in an apartment tower, with private conference rooms and quiet rooms for phone calls. It’s the kind of amenity a hotel wouldn’t have thought of a decade ago, but for mobile workers, it’s ideal — and may prove the model hotels look to in the future.

A high-tech home for the price of a hotel 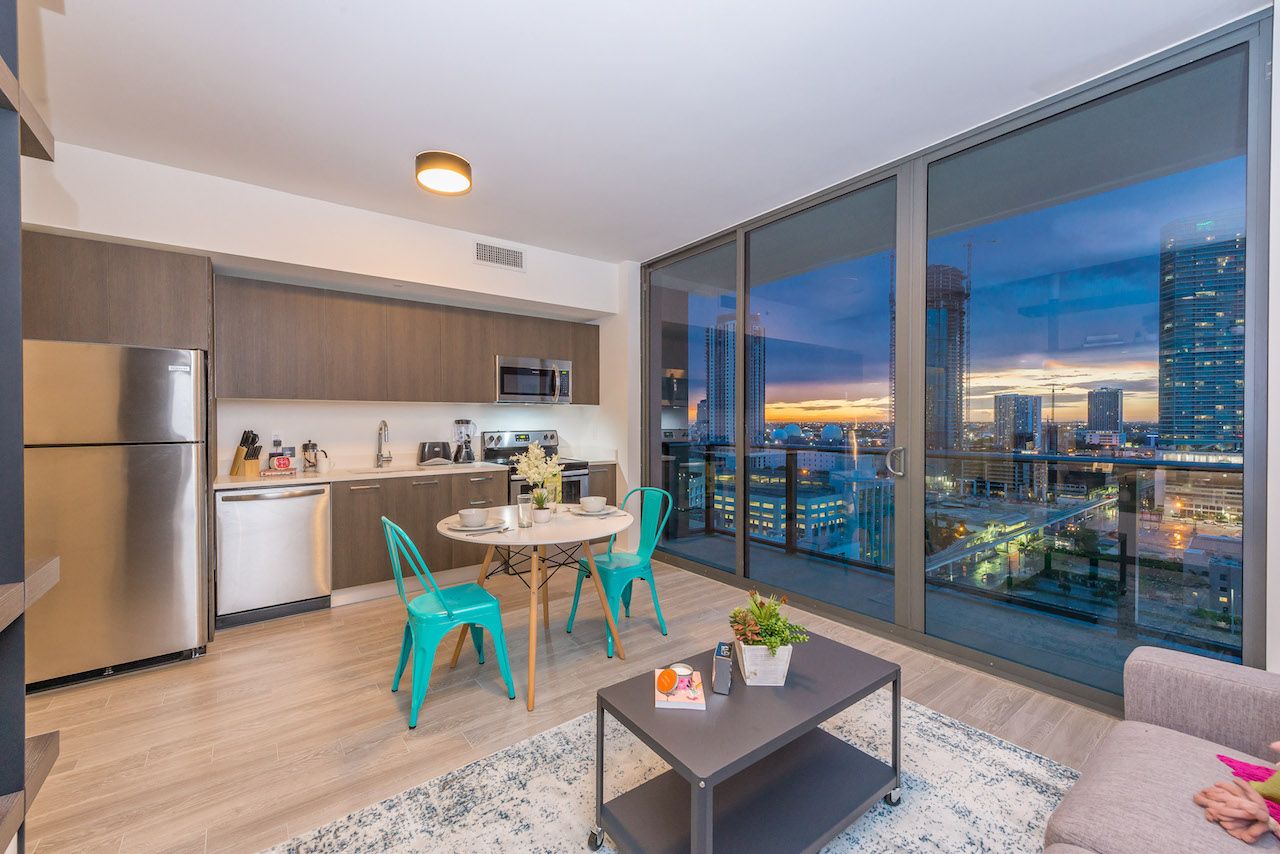 What the Guild does best is seamlessly take the comforts of an Airbnb or long-term hotel, and combine them with the community feel of a hostel. It does this with a luxurious flair, boasting spacious balconies, stunning views, and high-tech amenities.

Rooms at the Guild are essentially small apartments, with stainless steel appliances, granite countertops, full kitchens, and in-room laundry. Which doesn’t sound too far off from what you might find at Extended Stay America, but instead of coffee in the lobby, you’ve got cocktail-making classes by the rooftop pool.

The Guild and X Miami also put a serious emphasis on technology, with most of the guest experience managed through a smartphone app. Your key is on the app, as is a calendar of events for which you can sign up. Check-in and check-out are all app-based, as is the temperature control in your room. You can even give access to a guest.

This all seems well and good — until you can’t get a signal or your phone dies. The hotel does a lot of things right, but it is a little over-reliant on technology without manual backups. It’s the one blip that’ll likely be ironed out as this concept becomes more established.

Putting an emphasis on customization and quality at the hotel bar 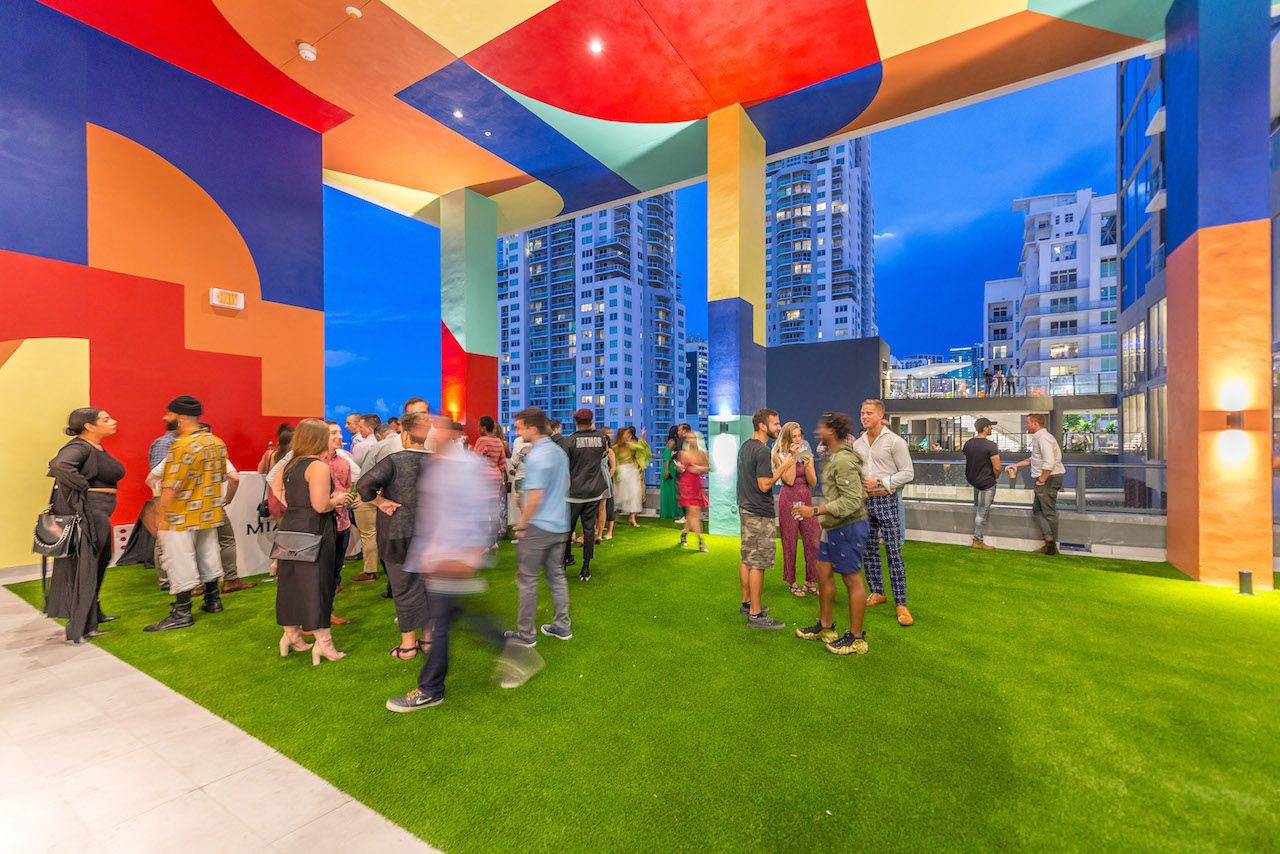 The downstairs bar is also far more than just a place to unwind with a cocktail at the end of the day. Jaguar Sun has instantly put itself among the best cocktail bars in Miami, meaning it draws locals not just from the building and surrounding neighborhood but the entire city. It’s become a popular hangout among local food writers and bloggers, so if you’re looking for restaurant recommendations, this is the crowd to ask.

Jaguar Sun is helmed by Will Thompson, an energetic, convivial cocktail expert who will craft a drink based on your spirit preference and flavor profile. The food here is a cut above your average bar fare, as well, boasting a chef in Carey Hines with Momofuku and Per Se pedigree.

Though putting upscale bars in hotels and apartment buildings is also not a novel concept, having a place this customized and locals-oriented is. Thompson also conducts cocktail classes for residents and guests, making himself and Jaguar Sun as much a part of the guest experience as the rooms themselves.

The trend is slowly starting to take off. 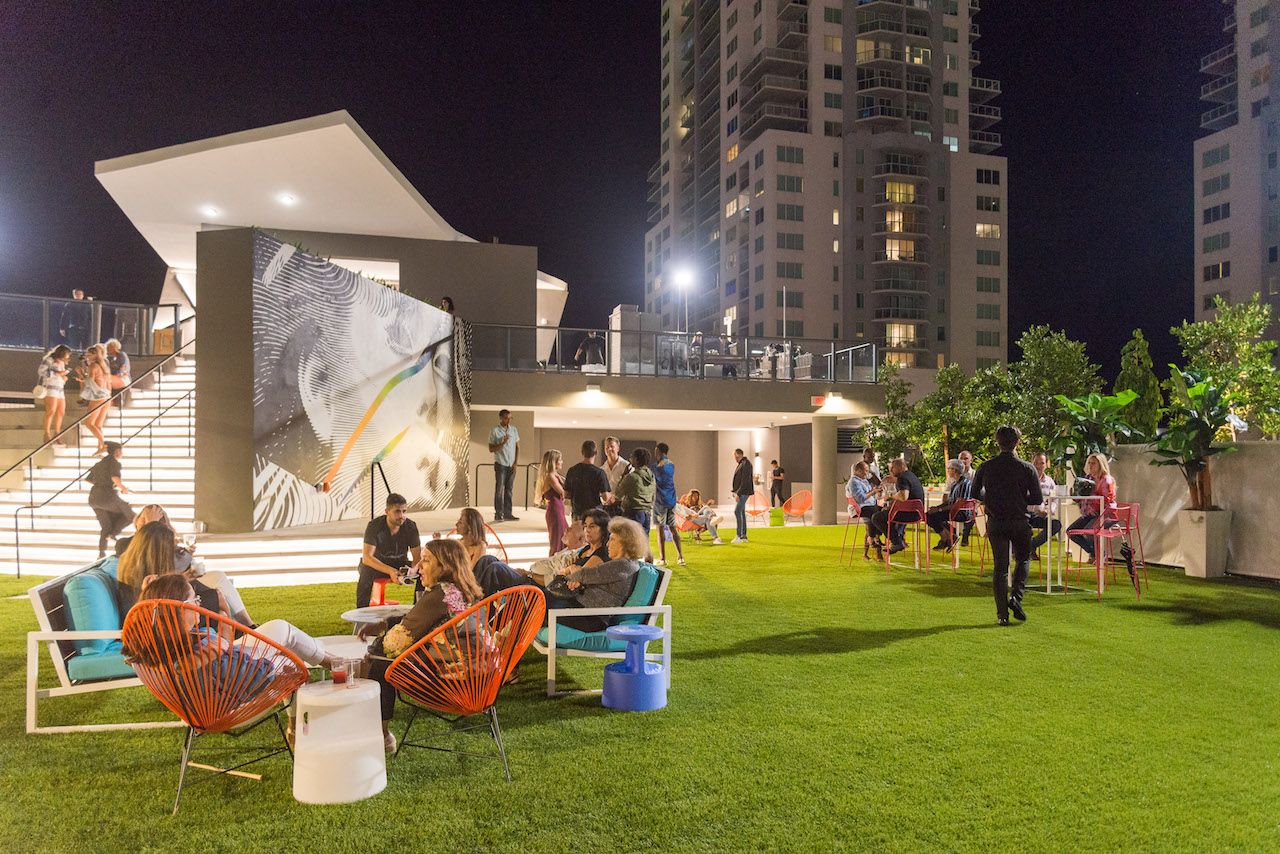 The Guild isn’t the only hotel putting a focus on shared spaces. Hilton’s TRU brand has cut down on in-room amenities in favor of more common areas and enhanced workspace. The Moxy hotels also invest in their common areas, doing away with the front desk and large in-room storage and replacing them with upscale bars and spacious work areas. But modern as they are, TRU and Moxy are still hotels. Those brands are inviting to a younger clientele, but they don’t integrate you into the city like this residential, shared-space concept.

While that integration gives a stay at the Guild a much deeper feel than a simple work trip or vacation, its amenities may not be useful for everyone. It’s not a budget option by any stretch — rates are about on par with a standard downtown business hotel — and if you’re not looking to learn dumpling-making next to a graphic designer who lives two floors up, it might not be worth the price.

But as mobile workers increase and the desire for more “local” travel experiences do too, hotels like the Guild may become a new travel trend — throwing back to our days in hostels but with air conditioning you control from your phone.