The next couple of Decembers offer some pretty fantastic travel-bucket-list two-for-ones.

Though you won’t find any BOGOs here, what you will find is the rare opportunity to see both a total solar eclipse and visit Antarctica in the same stellar vacation. As December 14, 2020, and December 4, 2021, both bring the lines of totality to the oceans near the white continent, a number of cruise lines are scheduling cruises to sail right into daytime darkness, then on into Antarctica. Though those cruises can be costly, shorter cruises will sail into totality as well, skipping Antarctica and saving you a ton of money. Below, find the ships sailing voyages for the next two solar eclipses, and where you’ll be going along the way. 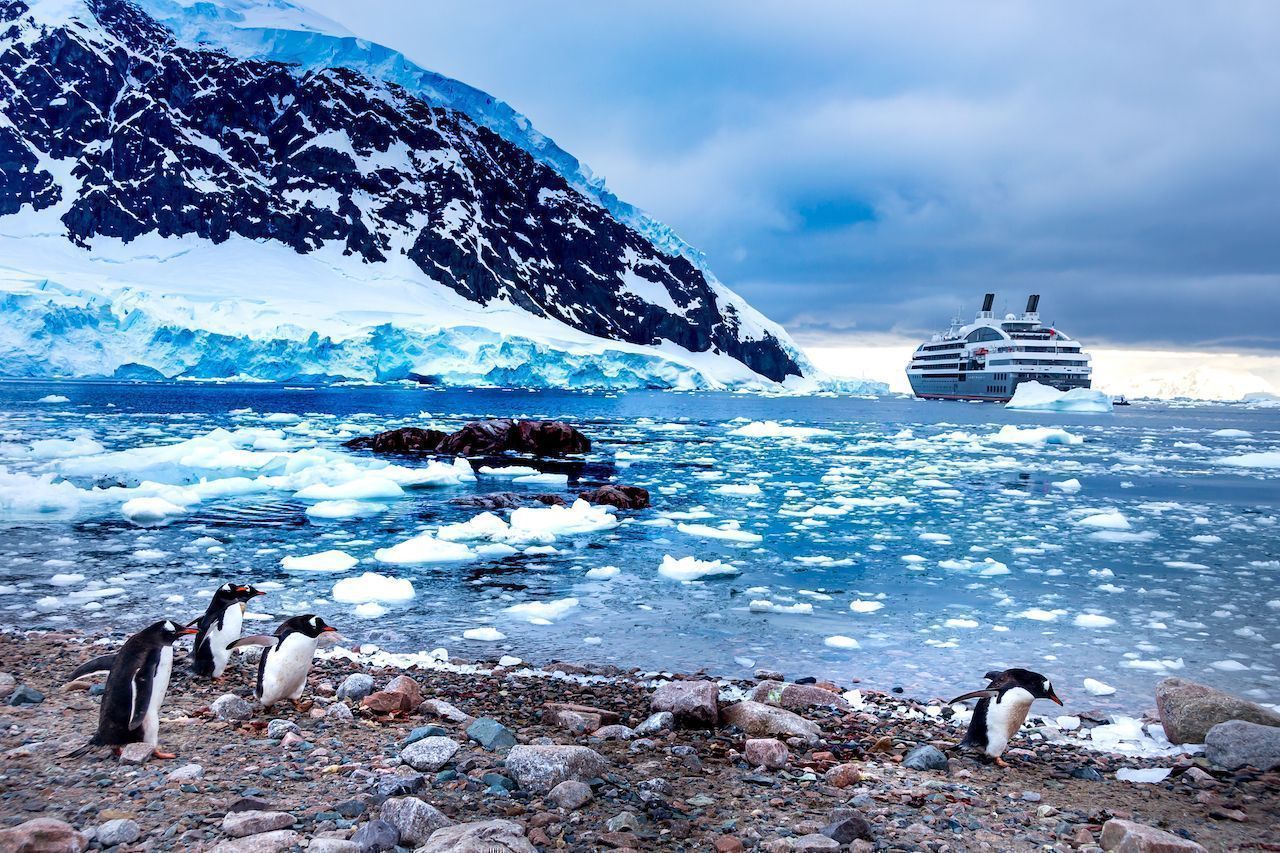 Sky and Telescope magazine is hosting this 22-day tour de force around Cape Horn and onto the Antarctic peninsula, catching full totality in the Atlantic Ocean on December 14. The fun gets underway in Santiago, Chile, with stops along the coast at Puerto Montt and Castro before delving into the Chilean fjords. You’ll hit Punta Arenas and Ushuaia, Argentina, before spending a few rocky days in Drake’s Passage on your way to Antarctica.

For the next four days, you’ll cruise, hike, and scour the Antarctic peninsula, interacting with penguins and other marine mammals in an untouched icescape. On December 11, the ship sails through the Scotia Sea on its way to the line of totality, where you’ll view the eclipse from the ocean on December 14. After a stop in Uruguay, you’ll return to Buenos Aires on the 18th and disembark on the 19th. Along for the ride, you’ll also have S&T editors, an astronomy professor, a geosciences professor, and even astronaut John Grunsfeld there to explain everything on land and in the sky.

This year’s line of totality isn’t exclusive to South America and Antarctica, so if you’d like to view the eclipse in, say, a pair of shorts and flip flops, look into this South Pacific cruise. TravelQuest has privately chartered the 332-passenger Paul Gaugin, which will leave from Papeete, Tahiti, on December 5. Your first stop is a private island in Bora Bora before spending a second day in French Polynesia, then making stops on the islands of Hiva Oa-Atuna and Nuku Hiva.

Day 10 brings a total eclipse around sunrise, which you’ll experience from the gleaming waters of the South Pacific. Then it’s on to Fakarava and Moorea before returning to Papeete. The 15-day journey will stop in some of the most spectacular scenery in remote Polynesian islands, past turquoise lagoons and green, rocky mountains. The eclipse will be a sight to behold, for sure, but the sights for the other 14 days will be worth the trip regardless. 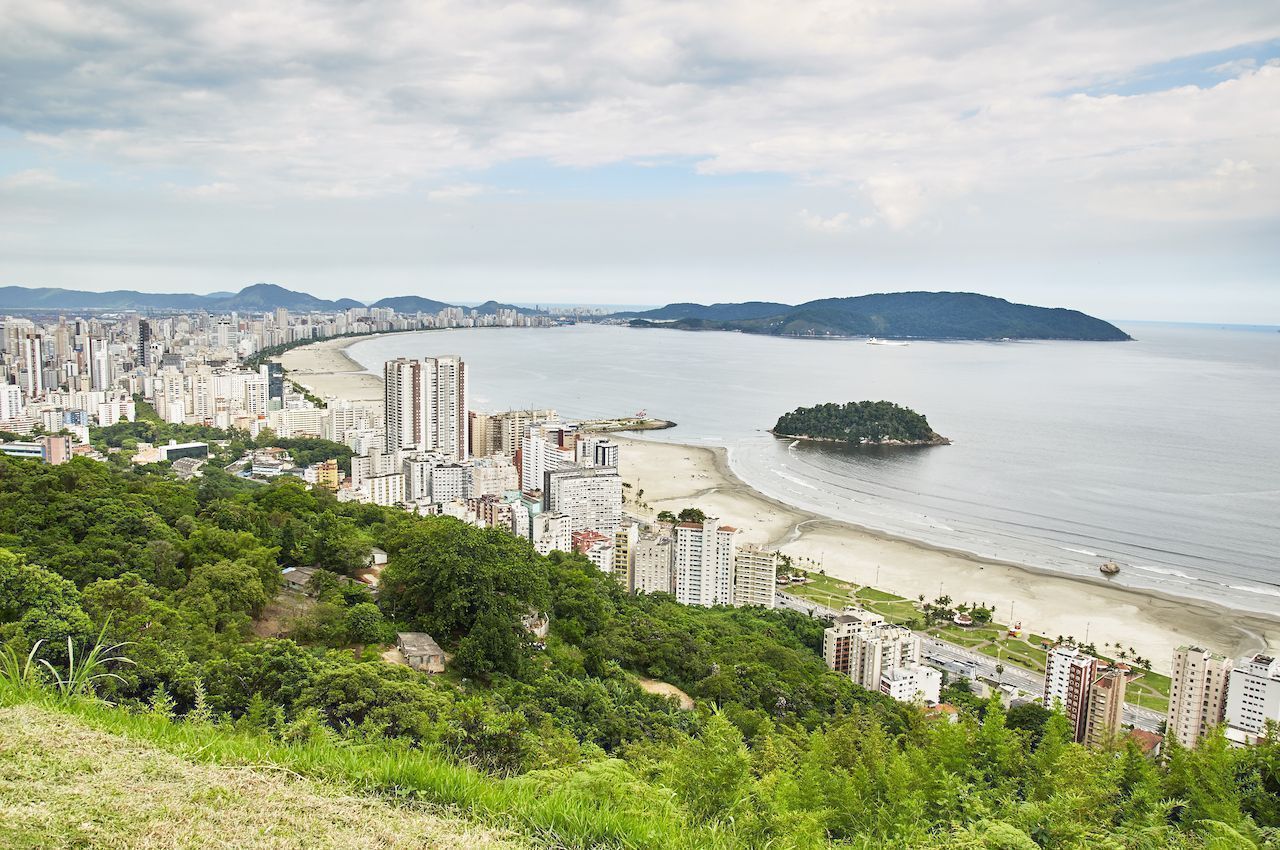 This cruise begins in Santos, Brazil, on the coast near São Paulo. Your first day will find you sailing into the line of totality as the day-at-sea coincides with the eclipse. From there, you’ll stop in Punta del Este, Uruguay, have an overnight port call in Buenos Aires, and spend a day in Montevideo before returning to Santos.

If you were trying to view the eclipse somewhere other than the deck of a cruise ship, Sinfora’s December sailing is for you. The ship starts out in Buenos Aires, staying in port during the eclipse so you can venture out into the city and celebrate with the portenos. Once you’ve experienced totality, you’ll spend two days at sea before arriving in Ilhabela, Brazil, stopping the next day in Itajai then ending in Montevideo, Uruguay. It’s a chance to visit three of South America’s most beautiful countries, and to get a view of the eclipse to boot. 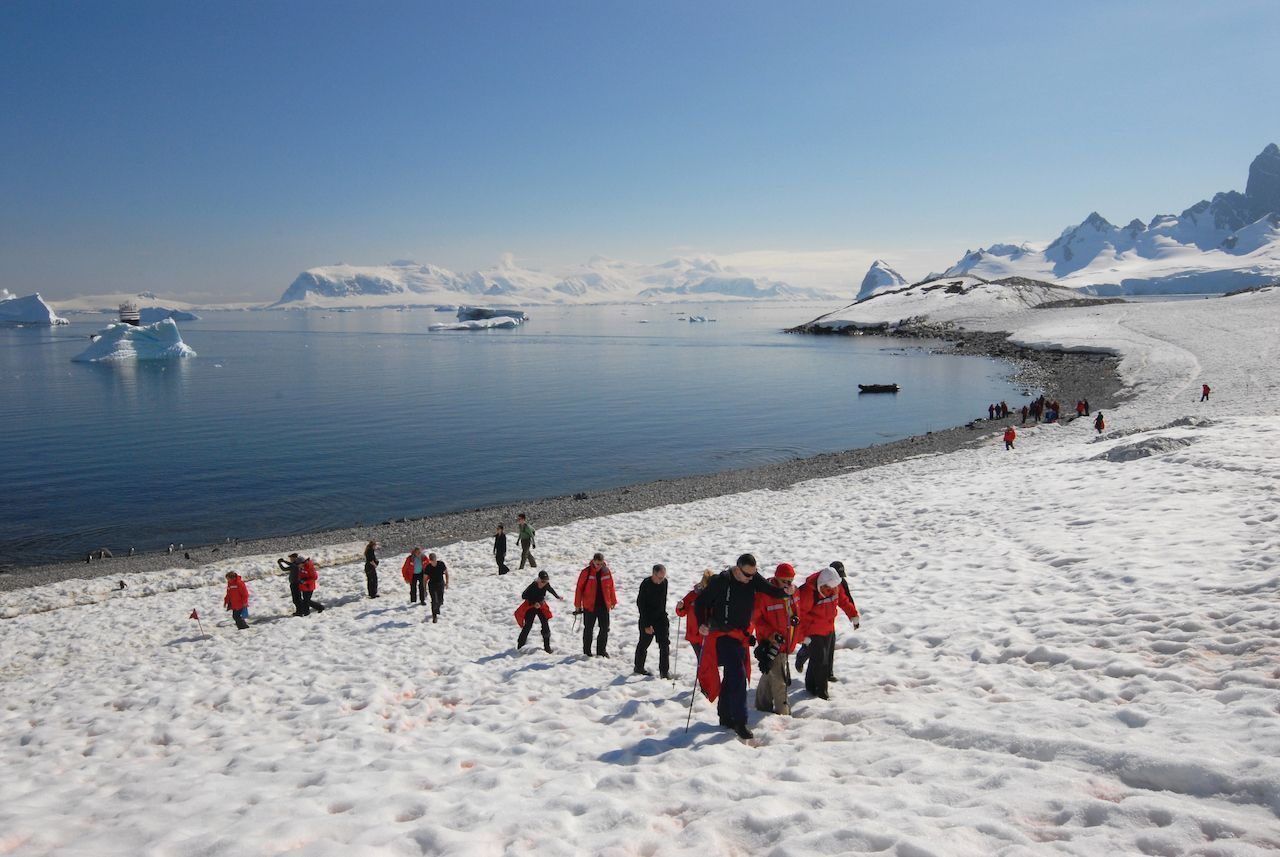 Silversea’s 22-day eclipse adventure gives you something to look forward to nearly the entire voyage, beginning in Buenos Aires on November 20. You’ll have to miss Thanksgiving, but you won’t mind as you explore the Argentine coastline in Puerto Madryn and Puerto Deseado. The next few days will be spent in the Falkland Islands and South Georgia Island, before sailing out to full totality on the fourth of December.

That’s just the beginning of the experience, as after your time in daylight darkness you’ll head south to Antarctica, spending five days there before crossing back through Drake’s Passage to Ushuaia. The pricetag here may look high, but remember this is an all-inclusive, high-luxury experience. So you’ll have fine wines, personal butlers, epic meals, and a team of experts at your disposal from start to finish. 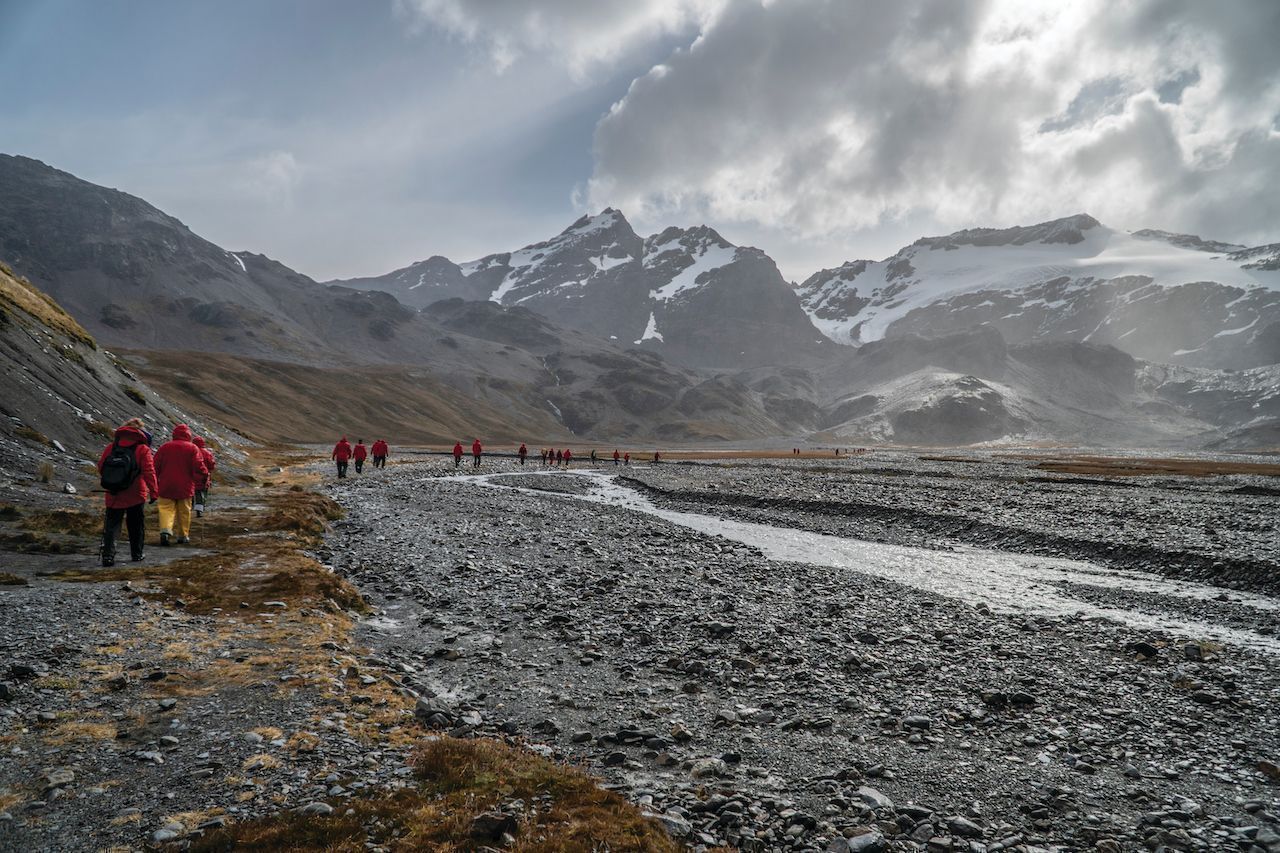 If 22 days at sea seems a little excessive, perhaps this shorter journey will be more your style. You won’t get the bright lights of Buenos Aires, but you will still traverse three countries, beginning in Ushuaia on November 26. You’ll delve straight into the unpredictable seas of Drake’s Passage before spending a day in the South Shetland Islands, then two days on the Antarctic peninsula. From there, it’s another day across the Drake and smack into position for full totality.

You’ll spend the rest of the cruise hitting Stanley, West Point, and New Islands in the Malvinas, as Argentina calls the Falklands, before getting right back where you started from in Ushuaia. Then it’s one night in the world’s southernmost city before boarding a charter flight the next morning.

Want to see the eclipse but don’t want to miss the holidays? Silversea’s Silver Cloud is the ship for you, leaving the Tuesday after Thanksgiving and getting you home two weeks before Christmas. The adventure begins in Ushuaia, and unlike the Silver Explorer, you’ll sail clockwise, hitting the line of totality on December 4 as your first “stop.”
From there you’ll stop at Elephant Island, spend three days on the Antarctic peninsula, then make a stop on South Shetland Island before venturing back through Drake’s Passage to Ushuaia. 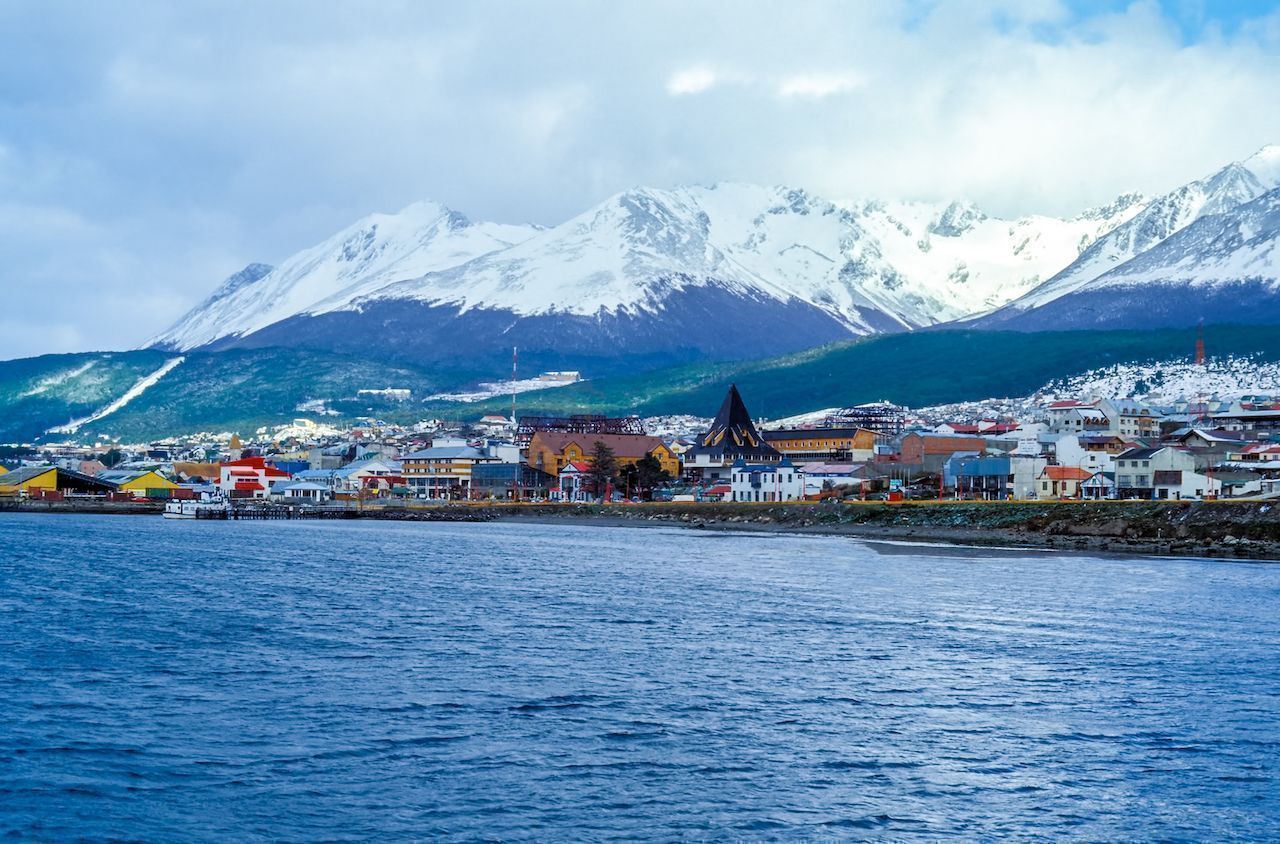 Seeing the eclipse from the middle of the ocean is one thing. Seeing day suddenly turn into night surrounded by glaciers and icebergs is quite another, and it’s what you’ll experience aboard Poseidon’s 23-day voyage. You’ll be smack in the middle of the Scotia Sea between the South Georgia and South Orkney Islands for totality on December 4, after spending nearly two weeks at sea.

Prior to the eclipse, you’ll spend a night in Ushuaia (hotel included) before hitting the Falkland Islands and South Georgia. Post-eclipse, you’ll get three full days along the Antarctic peninsula and South Shetland Islands before crossing Drake’s Passage back to Ushuaia. 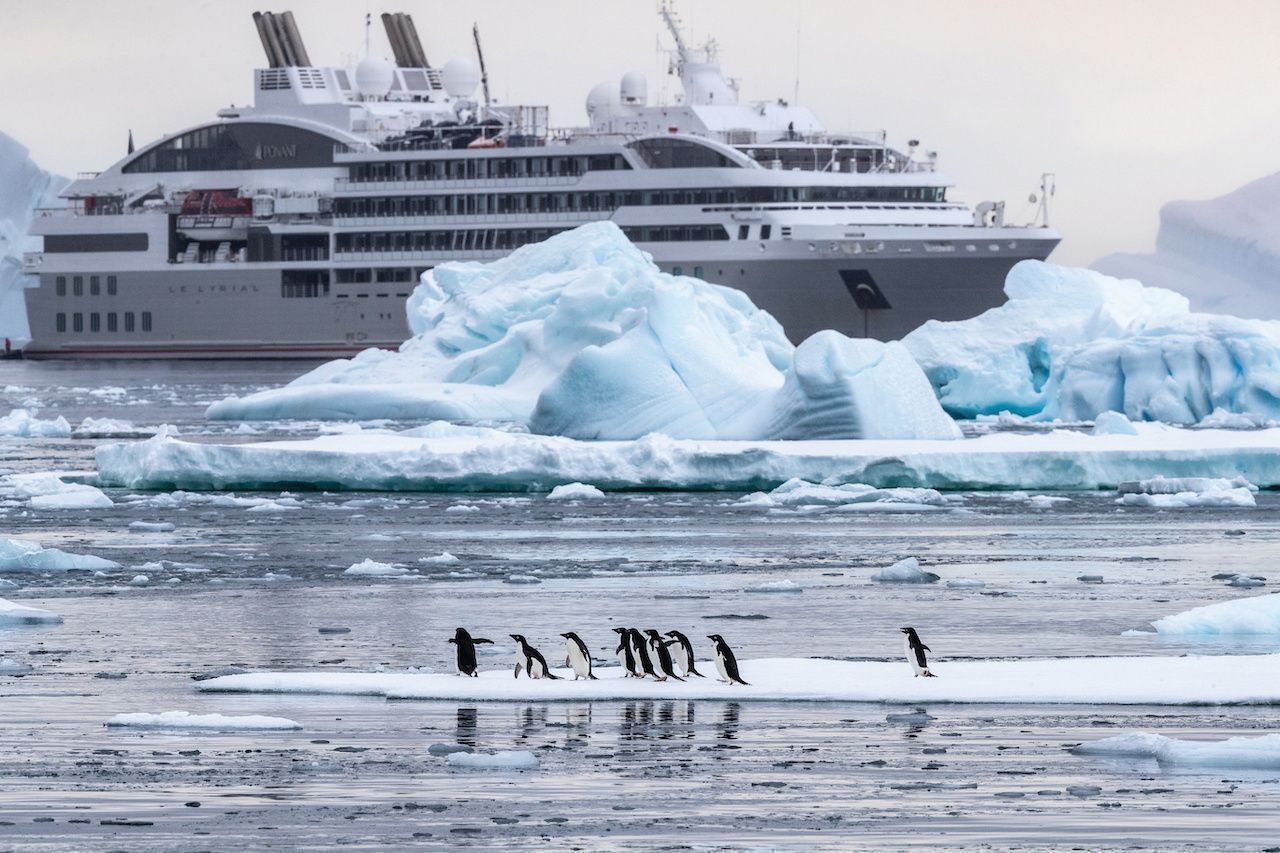 The ultimate education in both space and sea will be aboard legendary expeditioners Abercrombie & Kent’s chartered mega-yacht, where former astronaut Kathy Sullivan, astronomer Massimo Tarenghi, and rocket scientist David Crain will all be along to provide fascinating commentary. The journey begins at Santiago’s Observatorio Astronómico Andino, where the team of scientists will talk about life in space and why the eclipse is so special. The next day you’ll set sail for Ushuaia.

After a day there, you’ll return to sea and A&K’s finely tuned positioning in the Southern Ocean, where you’ll experience one minute and 40 seconds of totality, one of the longer stretches for this particular eclipse. You’ll spend four days in Antarctica before returning via the Drake Passage to Ushuaia. Onboard you’ll enjoy an all-inclusive experience, where every room has a private balcony, and laundry is done for you. You’ll also get a parka, backpack, and water bottle, in case you didn’t feel like checking a bag.

NewsThis Epic Cruise Will Take You To Antarctica During a Full Solar Eclipse
Tagged
Astronomy Cruises Lux Travel Insider Guides
What did you think of this story?
Meh
Good
Awesome

What It’s Like To Sail on the First Adult-Only Cruise Line in the US
Why You Should Go on a River Cruise, Even if You’re Not a Cruise Person
This Cruise Is the Most Deluxe Way To Travel the Mediterranean