When we lived in Spain a few years back, two of the most important dates our kids learned in school were 711 and 1492. Unlike in the US, where we learn that in 1492 Columbus sailed the ocean blue, in Spain 1492 is celebrated as the year King Ferdinand and Queen Isabella defeated the last Muslims rulers and united their country under Catholic rule.

The year 711 is when those Muslim rulers first arrived. That’s nearly eight centuries of Islamic reign in Spain — an inheritance that remains etched into the country. In middle school history classes, Spanish children study how Islamic towns looked, with their medinas and mosques, and how the society was organized. Roughly 4000 Spanish words derive from Arabic: almohada (pillow), alfombra (rug), almuerzo (lunch), azulejo (tile), among them. Even the oft-used expression “Ojalá,” meaning “Let’s hope,” stems from “Allah willing.”

Nowhere is Spain’s Islamic legacy more visible than in the south, notably in the province of Andalusia. Indeed, “Andalusia” derives from “Al-Andalus,” which was the name for the lands of the Iberian Peninsula — present-day Portugal and Spain — that were under Islamic rule. Andalusia, however, can be intolerably hot in summer. In contrast, winter brings fewer tourists, bluer skies, and, in southern Spain cities like Granada, the irresistible backdrop of snow capped mountains. In fact, it’s in Granada that your southern Spain itinerary should begin. 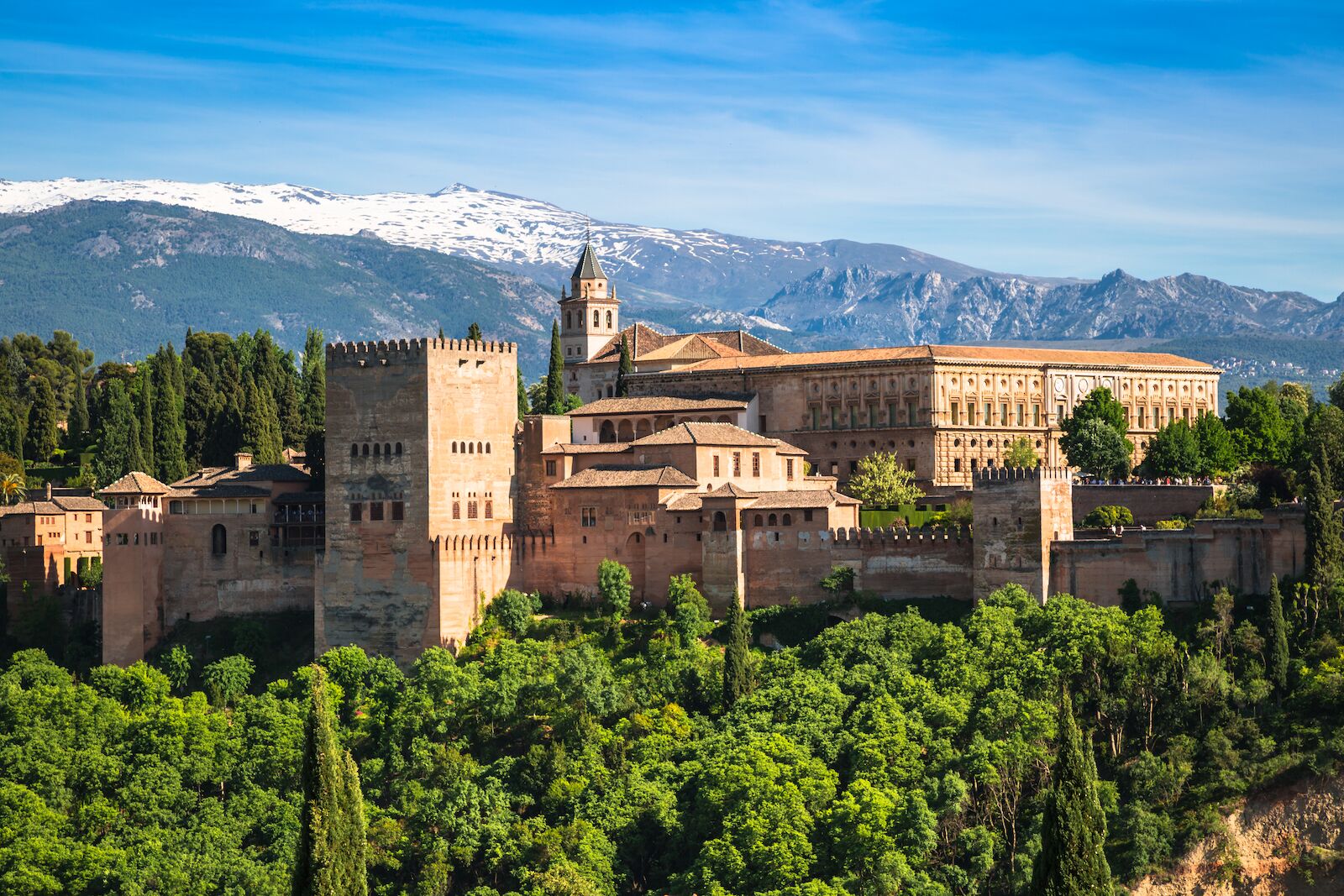 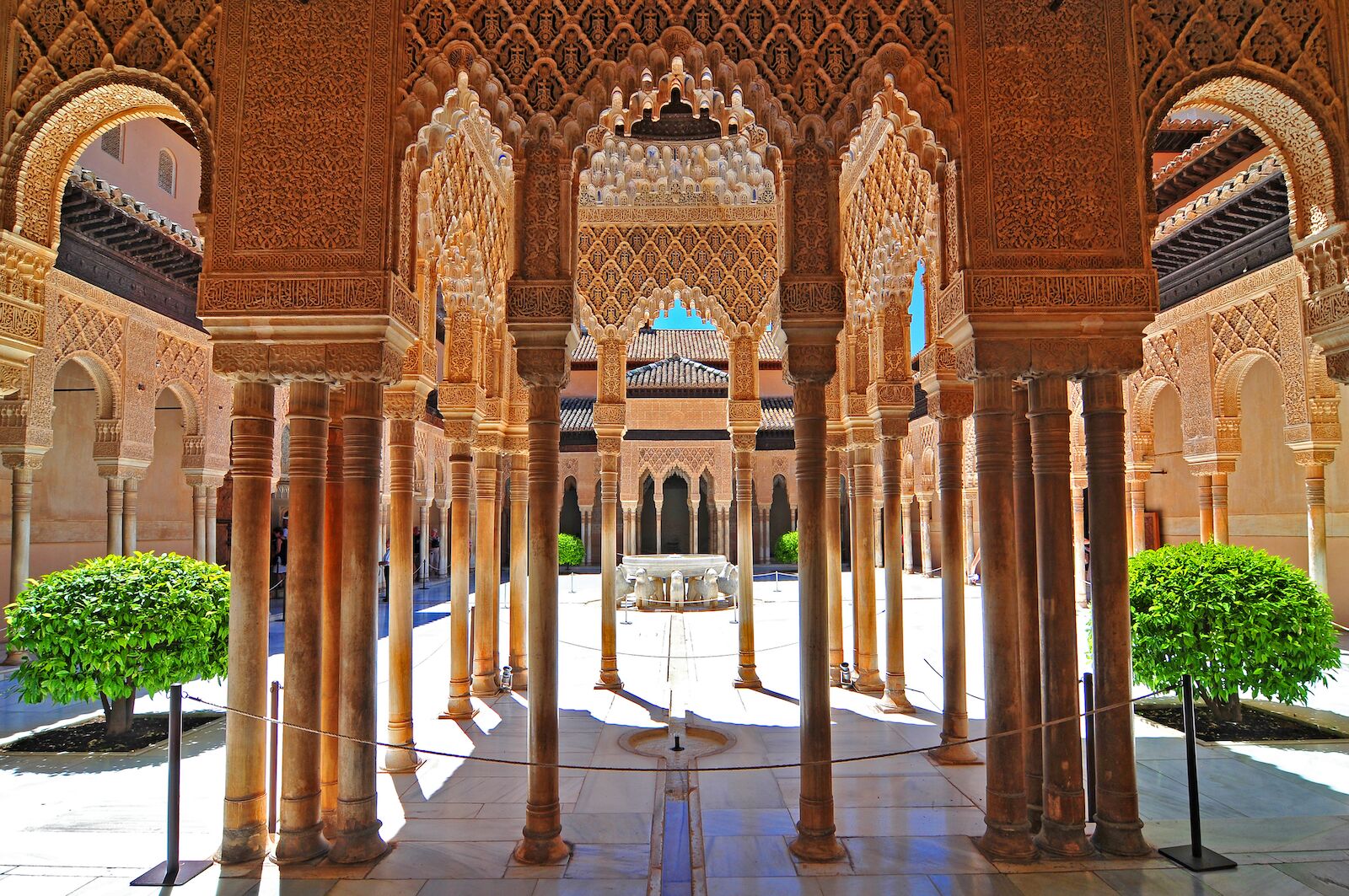 Inside The Alhambra. Photo: Cezary Wojtkowski/Shutterstock 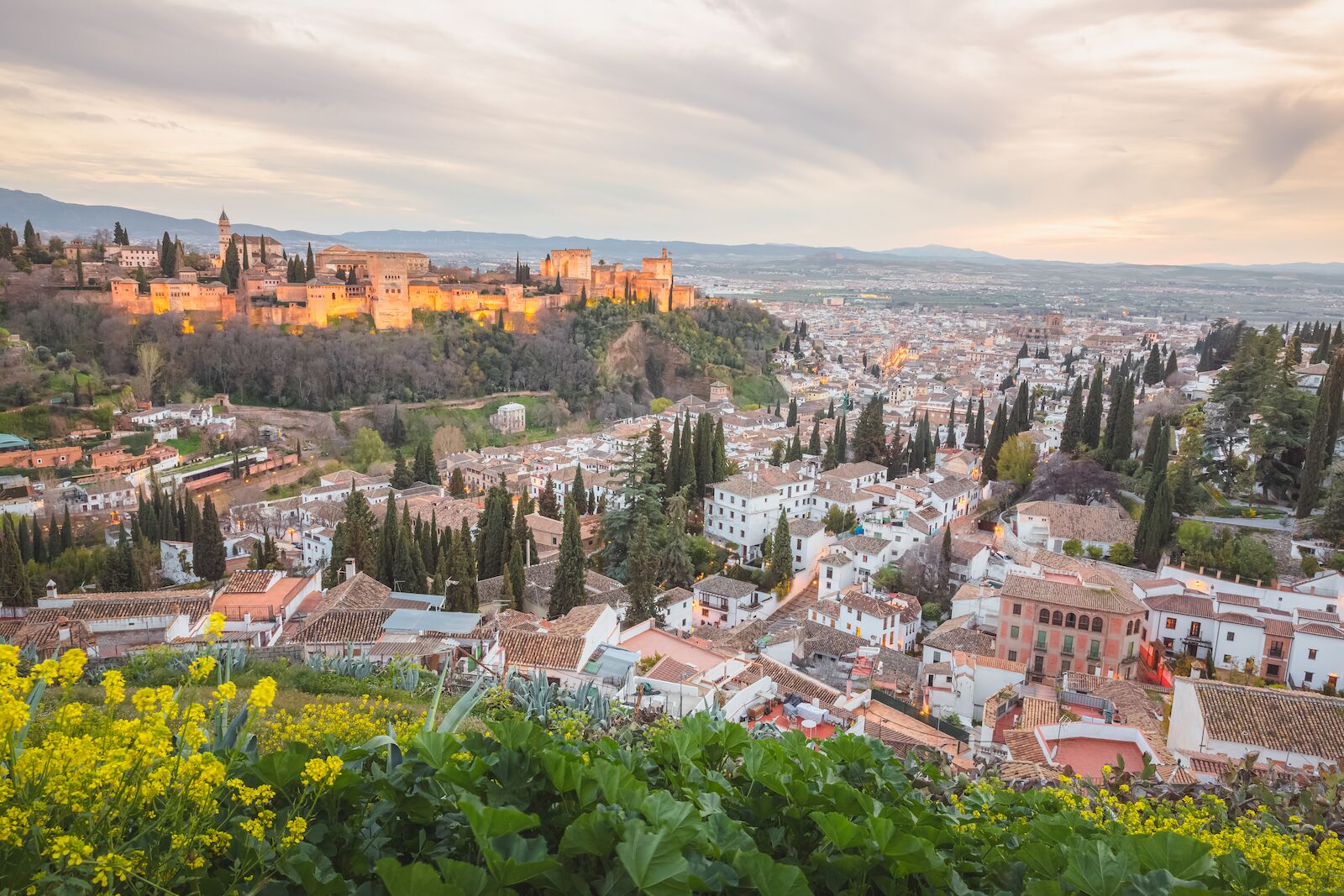 The Alhambra and the Albaicín neighborhood. Photo: Stephen Bridger/Shutterstock 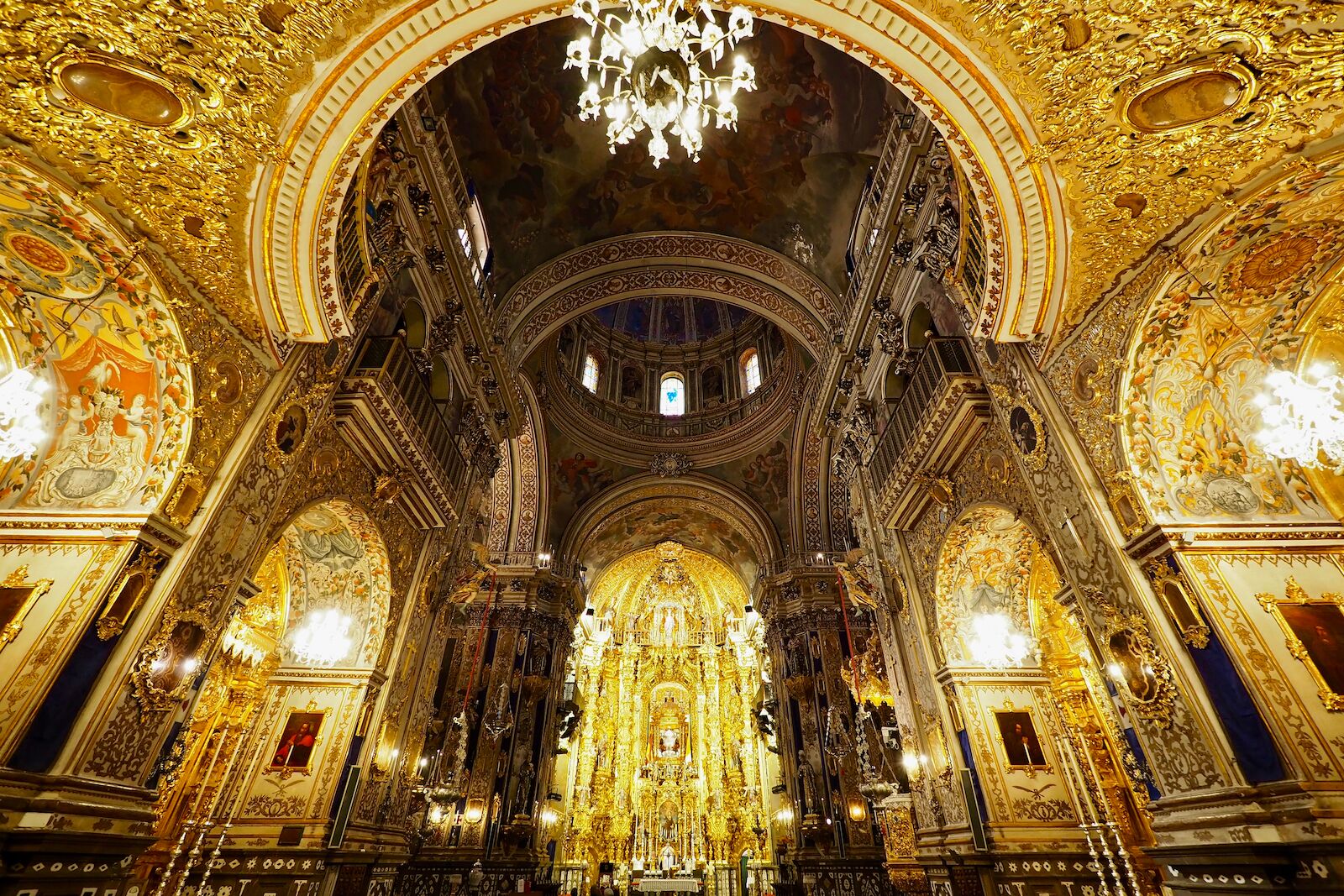 Granada was the seat of the last Islamic kingdom in Spain until 1492, when the Emir Mohammed XII surrendered to the armies of the Catholic monarchs Ferdinand and Isabella. He was the last in line of the Nasrid dynasty, which over two centuries built upon and beautified Granada’s most prominent feature: the Alhambra castle that guards over the city.

Located at over 2400 feet in elevation, Granada can be chilly in winter, with overnight lows in the high 30s, but midday temperatures can reach 60 degrees. It’s worth it for the view of the 11,400-foot peaks of the Sierra Nevadas, which are not only sharper in the crisp winter air, but worthy of their name, which translates to “Snowy Range.”

What to do in Granada

While Granada had been under Muslim rule well before the first Nasrid emirs, it was they who converted The Alhambra from fortress to a palatial residence. The General Day Visit ticket ($14, with one additional dollar for the audio guide) lets you visit the original Alcazaba fortress, the Nasrid palaces, and the Generalife summer retreat above the Alhambra, with its pools and courtyards. Give yourself time just to relax in the gardens here.

After visiting the Alhambra, walk to the hilltop Albaicín neighborhood, where 27 minarets have long since become church towers. Stroll between the whitewashed walls of its narrow streets and glimpse the occasional traditional inner courtyard through the front gate. Walk to the viewpoint at 1 Calle del Algave for the classic photograph of the ancient fortress in front of the Sierra Nevadas.

When you head back into the main town in the early evening, you’ll find a host of tapas bars across the way from Alhambra. The hundred-year-old Bodegas Castaneda is worth stepping into for the interior alone, but order a few tapas — since Andalusia is where the early evening tradition of sharing small plates originated. While Jamón Iberico, aged ham from black, acorn-fed pigs, is adored throughout Spain, the best producers come from Andalusia — so you could start with that. Spinach and chickpeas are also a typical Andalusian dish.

One your second day in Granada, visit the historic center. After a day admiring soothing Islamic architecture at the Alhambra, you’ll need sunglasses when you enter the Basilica de San Juan de Dios, whose interior is almost entirely covered in gold. Built in the early 1700s, it exemplifies not just intensely ornate Baroque architecture, but the wealth that Spain took from its colonies in the Americas — following that other event in 1492. (After all, it was Ferdinand and Isabella who bankrolled Columbus’s voyage).

An eight-minute walk away, the Granada Cathedral was built atop the ruins of an old mosque within decades of the “Reconquista,” or “Reconquering,” as the triumph over Muslim rule is known in Spain. Just next door to the Cathedral is the Royal Chapel where the architects of the Reconquista themselves — King Ferdinand and Queen Isabella — are buried. The nearby museum reflects Isabella’s devout Catholicism: you’ll find her collection of Flemish panels and Spanish paintings depicting pious themes.

How to get from Granada to Córdoba

Three daily Renfe trains take you from Granada to Córdoba, the next place on your southern Spain itinerary — the fastest of which makes the trek in an hour and half. (Winter prices for basic travel are between $20 to $30, going up to $50 to $70 for premium class).

If you are driving, the 100 miles will take you 2.5 hours. Consider stopping on the way in the city of Alcalá la Real, which was retaken from Islamic rule by King Alfonso XI in 1341. The garrison there helped Christian kings check the ambitions of the Nasrid caliphs and, in 1492, served as a strategic supply point for the Catholic victory over Granada. 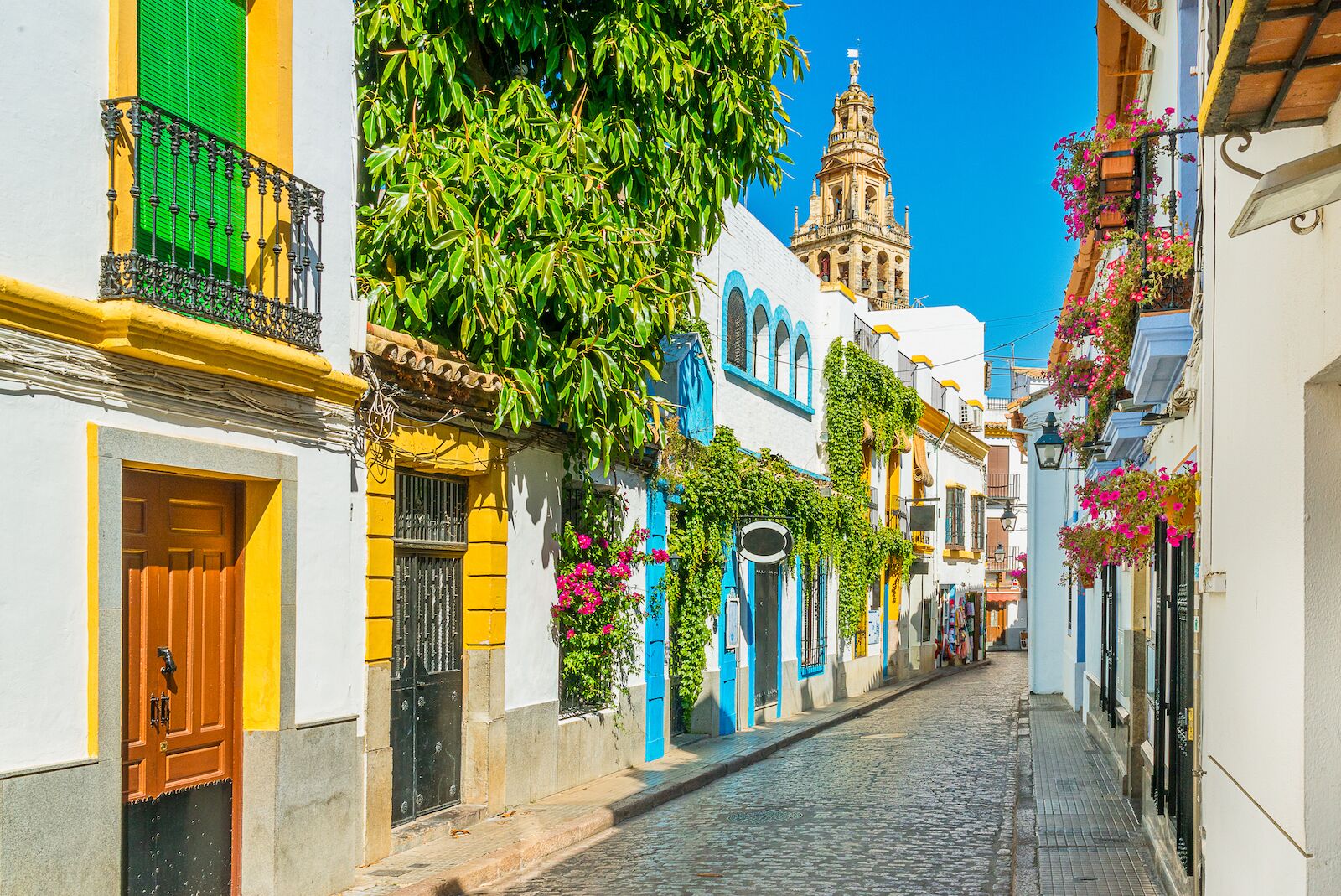 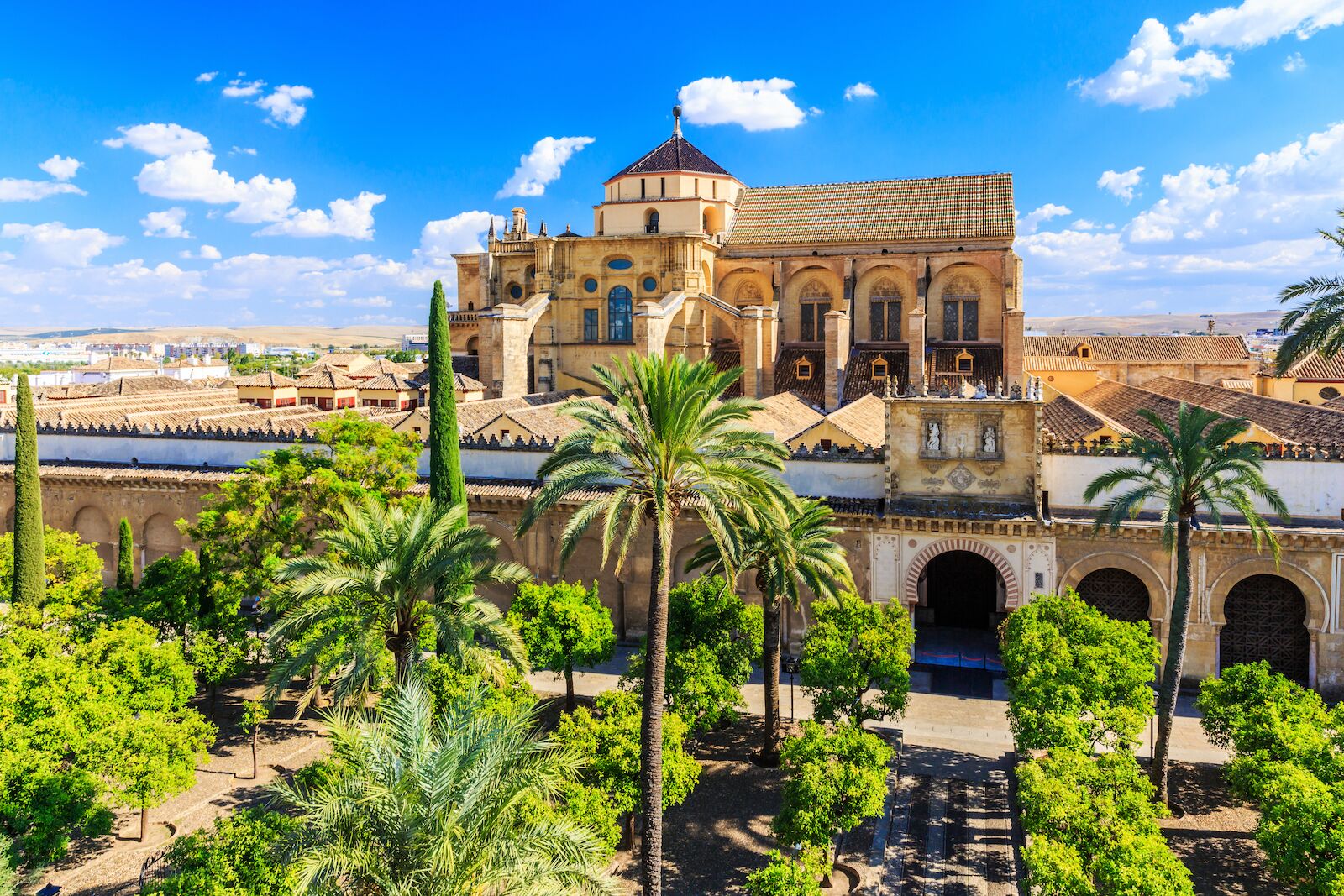 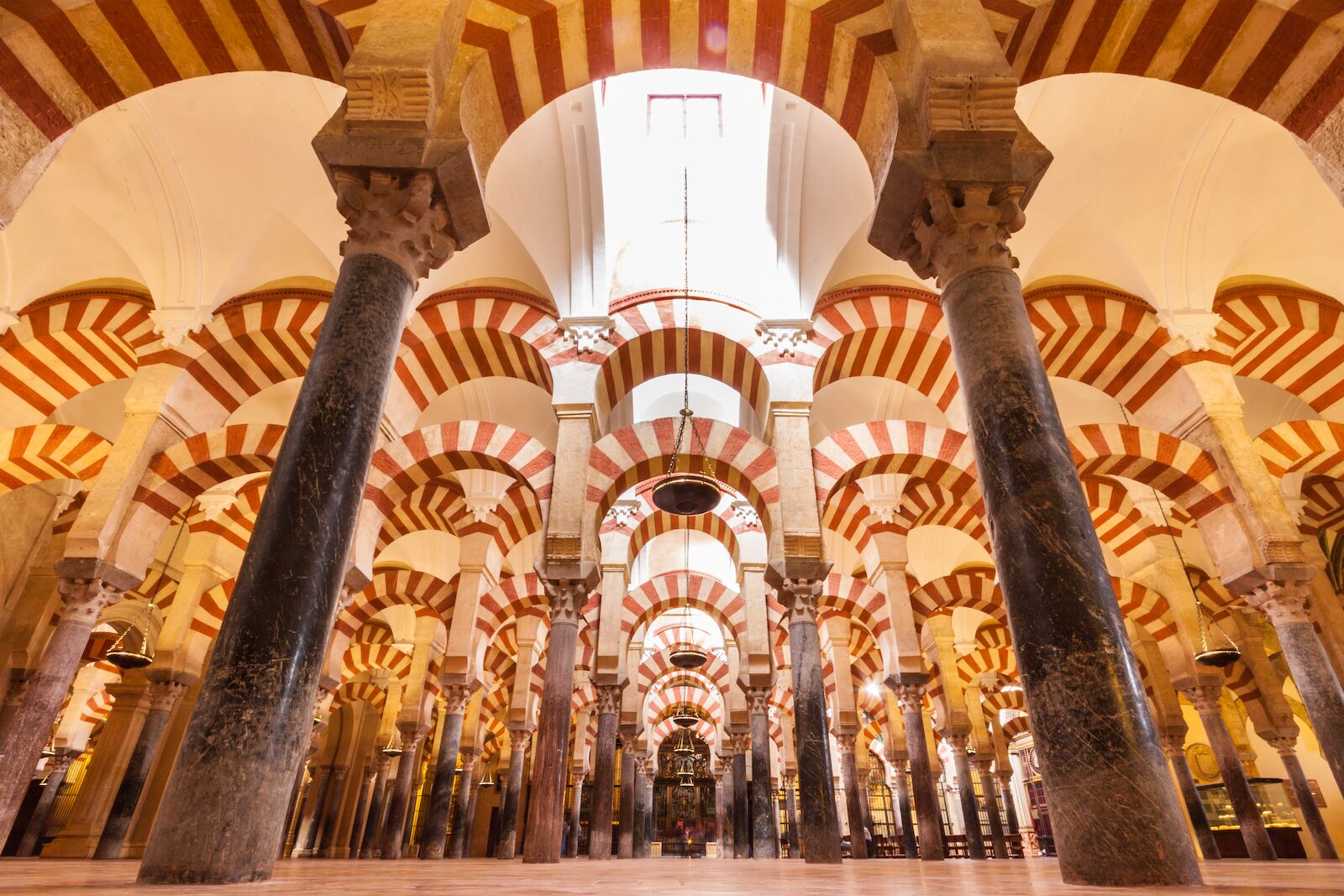 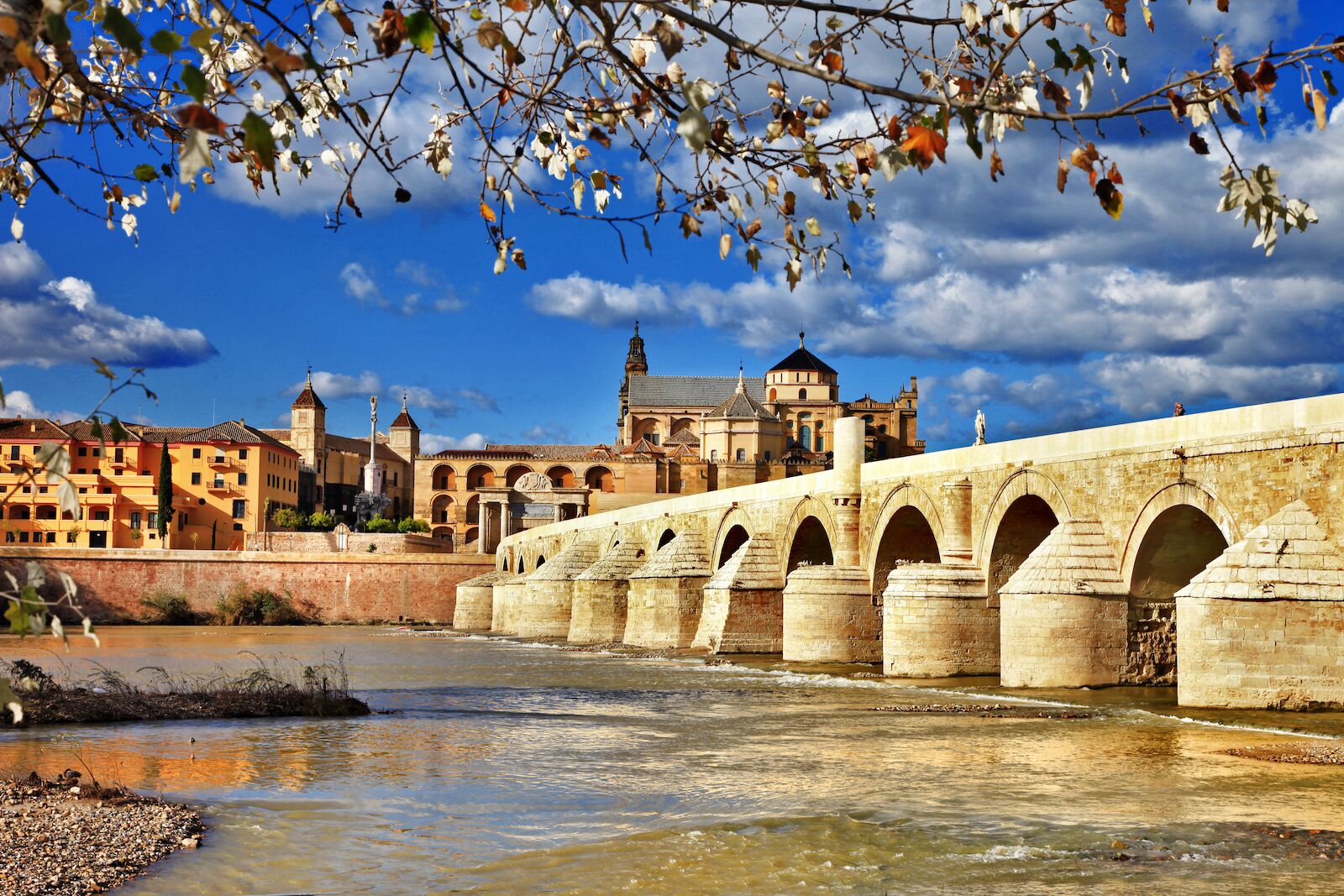 While Granada was the last capital of Al-Andalus, Córdoba was its first. The Umayyad Caliphate here lasted for 300 years until 1030, followed thereafter by Muslim factions. During the Umayyad era, Córdoba became one of the largest cities in Europe, with 100,000 residents, 300 mosques, grand palaces, and many public buildings. A UN World Heritage Site, Córdoba also has a stunning 2000-year-old Roman Bridge over the Guadalquivir River that, incidentally, appeared in Game of Thrones.

What to do in Córdoba

Cinematic bridge notwithstanding, Córdoba’s best known construction is the Mezquita-Catedral de Córdoba — known alternatively as the Great Mosque or the Cathedral of Our Lady of the Assumption. Its confused nomenclature arises from its history first as a mosque and, after Córdoba’s fall to Christian armies in 1236, as a cathedral. The most striking feature of this place of worship are its boldly painted double-arched columns. Tickets to visit are $11 ($9 for seniors and youth, $6 for kids 10-14).

The underground Caliphate Baths ($3 to visit) are another relic from Islamic rule, while the Córdoba Synagogue, built in 1314 in the “Mudéjar” style, attests to the lasting influence of the artisans who had built Córdoba’s earlier mosques and palaces. It’s also indicative of the relative religious freedom that existed throughout the Al-Andalus reign and even thereafter — with Christians, Muslimns, and Jews living in proximity. That ended with the Spanish Inquisition’s fanatic pursuit of non-Cartholic “heretics.”

The Mudéjar style can also be seen in the lovely pools and gardens of the fortress Alcázar de los Reyes Cristianos, or Alcázar of the Christian Kings, built by Spanish King XI. Alcázar tickets are $5. After taking in the many religious sites and palaces, walk through the lovely town, savoring the slender lanes.

An excellent place for dinner is Restaurant Damasco, named after the Middle Eastern city, Damascus, that administered the Umayyad Caliphate. It’s not typical Andalusian food, but rather serves dishes from throughout the Middle East — with authentic and new flavors that you likely haven’t had in your local hummus and falafel joint at home.

How to get from Córdoba to Seville

The fastest train between these two cities takes 45 minutes, with winter prices starting at about $13 one-way. If you opt to drive the 90 miles, it will take 1.5 hours. Consider stopping in Écija, where the Museo Histórico Municipal de Écija has several stunning Roman mosaics uncovered in recent excavations. 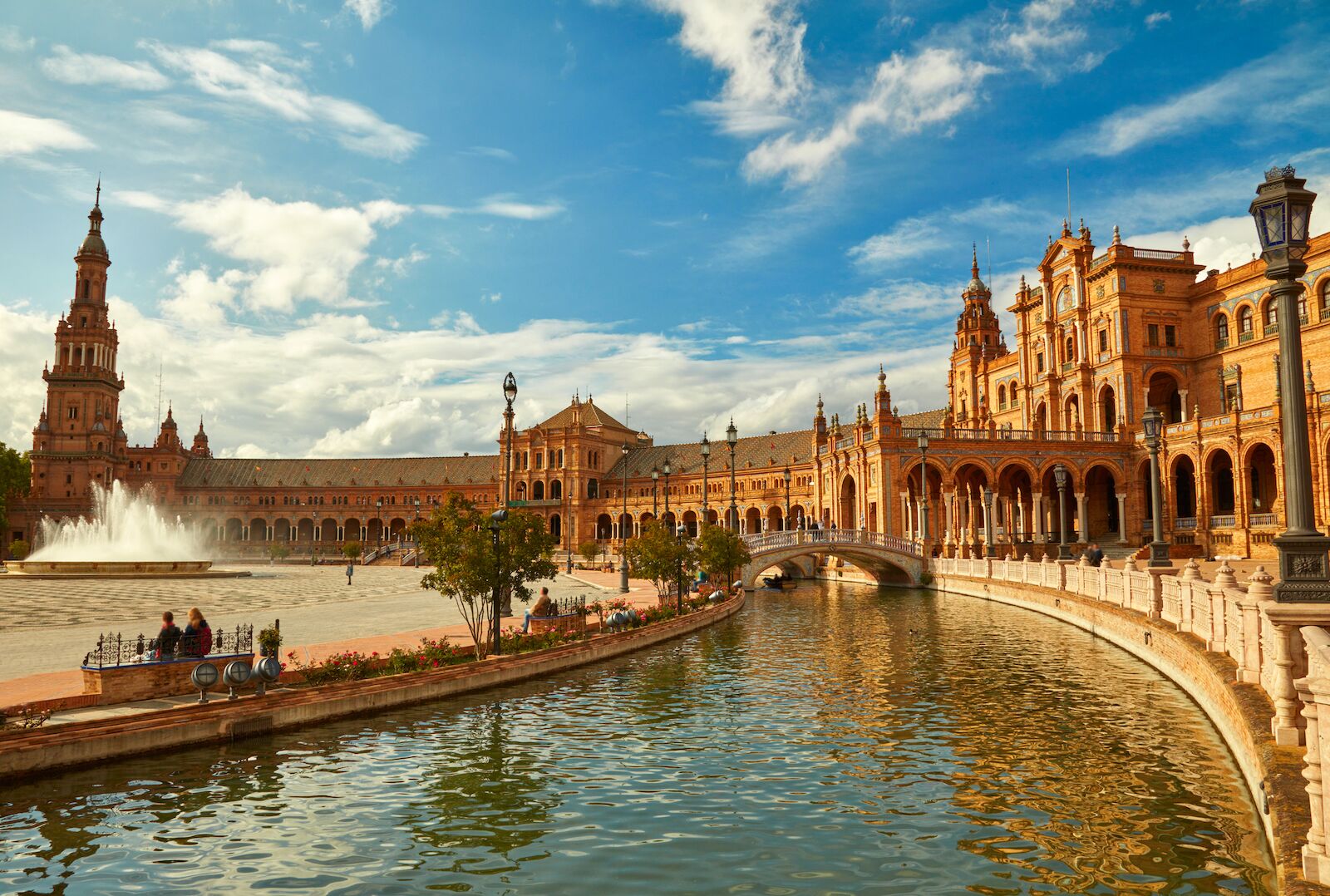 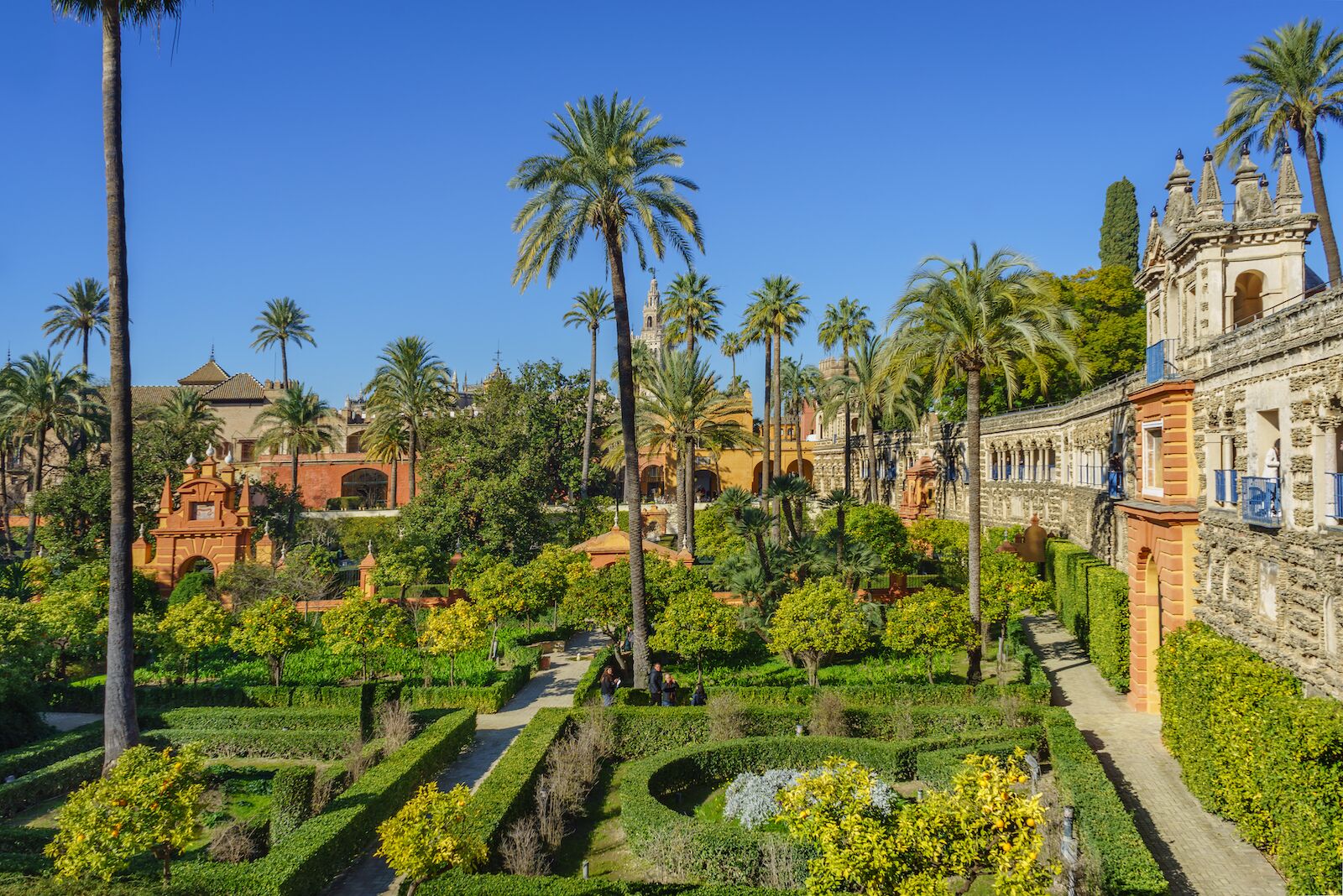 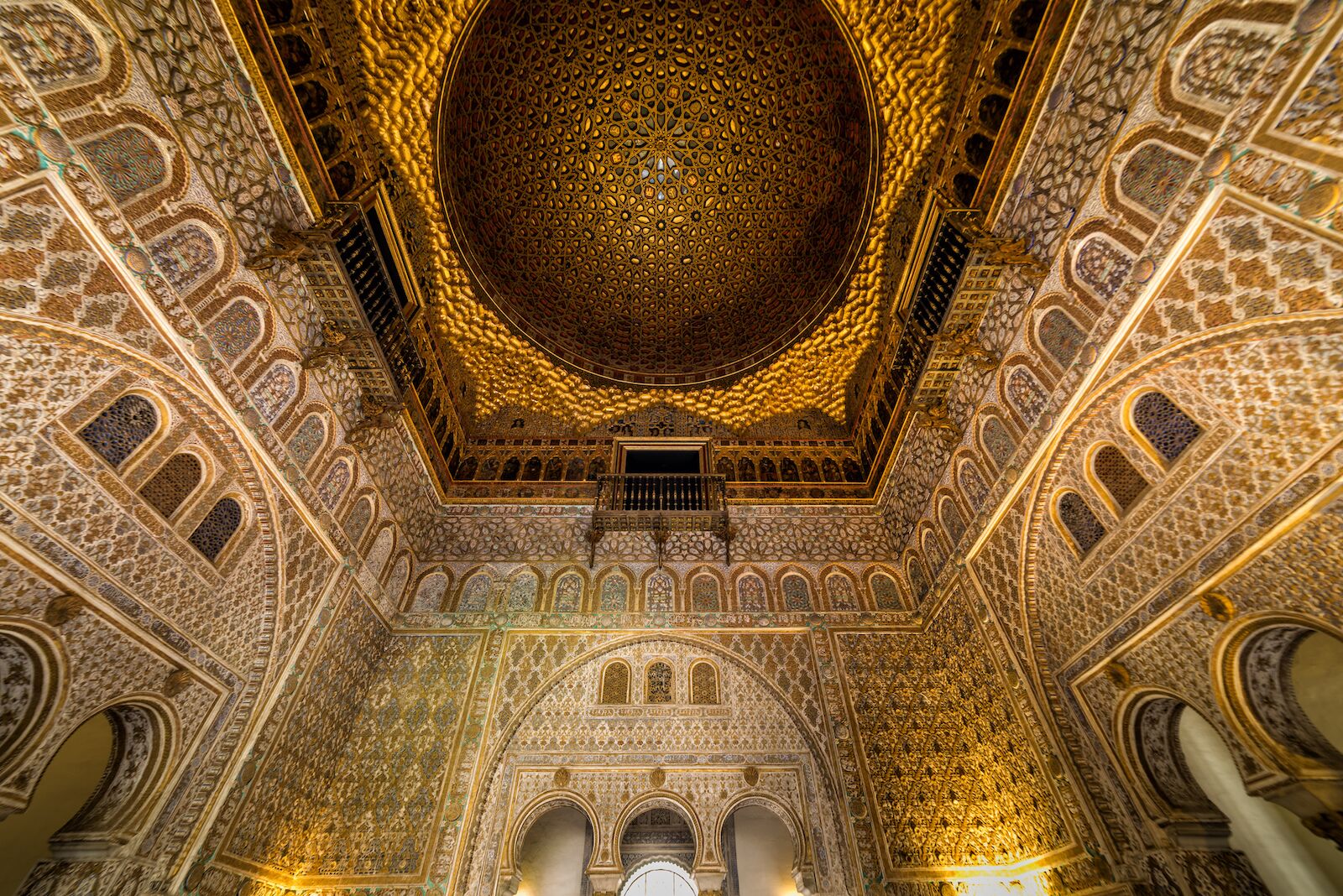 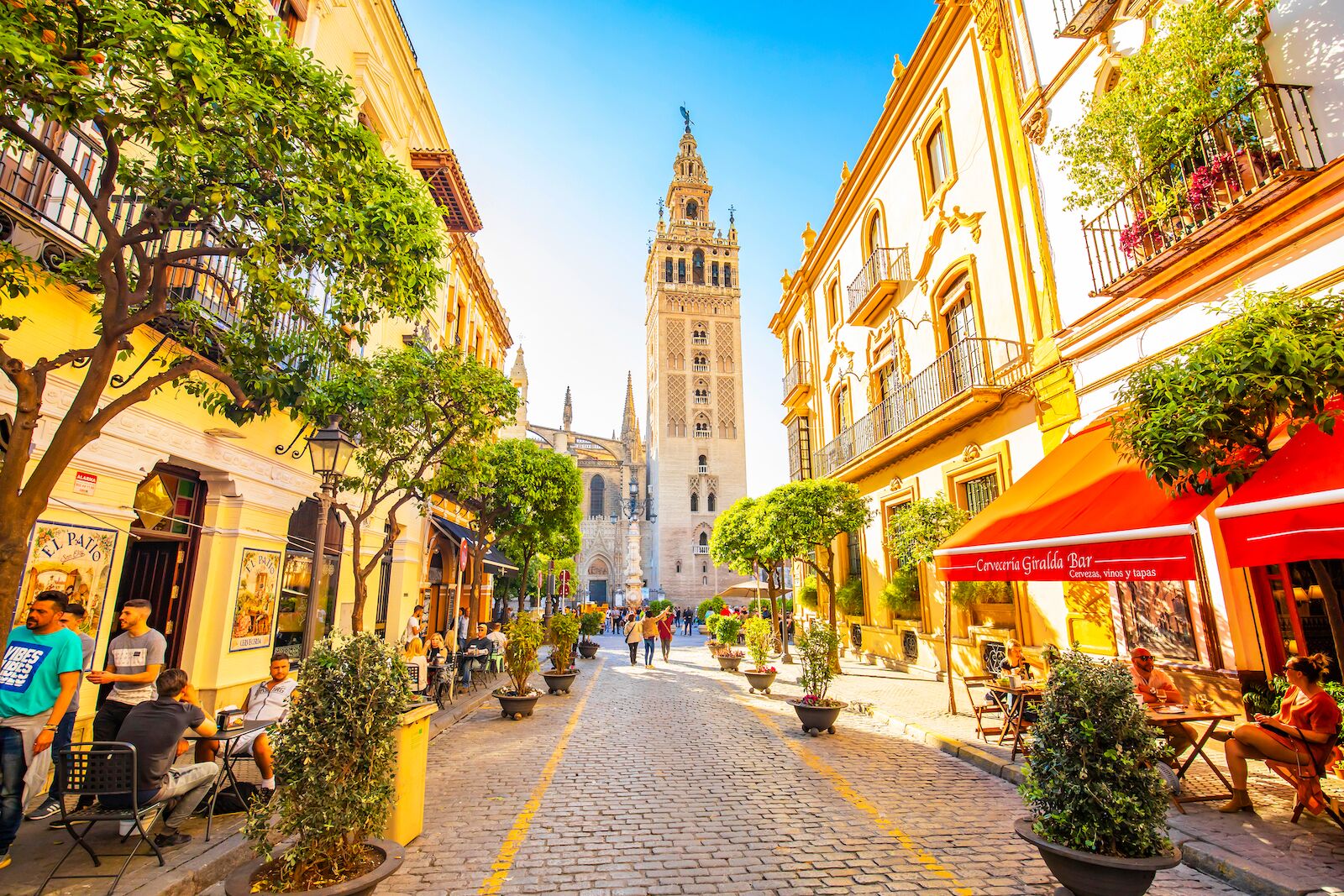 The paragon of Spanish Mudéjar architecture is the Real Alcázar de Sevilla. A series of stunning palaces halls and courtyards built by Muslim rulers throughout the 12th century, the Alcázar was further expanded upon in the same Mudéjar style by Christian regents, including Ferdinand and Isabella. It remains in use by Spain’s royal family today — making it Europe’s oldest still-functioning palace.

Fortunately, you can visit this UNESCO site and even see the upper floors, provided the Spanish royals aren’t in town. Were you to enter in summer, you would marvel at how the thick walls, plentiful pools, and series of halls and patios make the Alcázar much cooler inside than the 100-degree temperatures outside — even when packed with visitors.

In winter, though, you needn’t worry about the heat at all — or the crowds. Instead, you can take your time admiring the stunning Islamic patterning of myriad geometric shapes in this expertly preserved palace. Give yourself a solid morning or afternoon to explore this intermingling of Islamic and Christian art, as beautiful inside its decorative halls as outside in its manicured gardens.

After touring the city, duck into El Riconcillo, Seville’s oldest bar and restaurant. The braised pork cheek is a Seville specialty.

How to get from Seville to Vejer de la Frontera

The Muslims who first came to Spain were Arab speakers from the Middle East and Berbers from North Africa. As the Reconquista marched on, many Muslims left for North Africa — irrespective of their ancestors’ place of origin. As they pushed southward, Spanish monarchs viewed the towns at the tip of the Iberian Peninsula as the final frontier in their battle of the Reconquista.

If you continue to drive south from Seville, you’ll enter Cadiz province and pass towns like Jerez de la Frontera — which translates to Jerez of the Frontier. Jerez, a Spanish word derived from Arabic, means sherry. You could stop to pick up a bottle of this sweet desert-like wine.

You’ll continue on to Arcos de la Frontera, a hilltop town of white buildings, before you at another similarly named town: Vejer de la Frontera. Also atop a hill, Vejer charms visitors with its narrow streets, gleaming white homes, and expansive views of the Atlantic Ocean below. You aren’t at the closest point to Africa here — that would be Tarifa, a city 30 miles southeast. But even from up here, on a clear day like the type you get in winter, you can look due south and see the country of Morocco, with its own hill-top towns, narrow streets, and burnished white walls.

LanguagesWant To Make the Most of a Trip To Spain? Speaking Euskara or Castilian Would Help
Tagged
Insider Guides Spain
What did you think of this story?
Meh
Good
Awesome