“Pumpkin empanadas are a recipe for homemade nostalgia,” Casares says. “These bring back fabulous memories of my mother and grandmother baking these when pumpkins were available, especially in November around Thanksgiving.”

Casares, the author of The Enchilada Queen Cookbook, says that pumpkin empanadas were typically part of a special meal or event, and they were usually made in big batches for family gatherings. It’s a familiar story across Mexico and parts of the Southwest including Arizona, New Mexico, and Texas.

“Empanadas are everywhere in Mexico, and pumpkin is such an important part of Mexican cooking,” Casares says. She adds that while commercial pumpkin empanadas are better than no empanadas, “homemade is the best.”

Spanish colonizers brought empanadas to Central and South America in the 1500s, according to What’s Cooking America. In the broadest sense, empanadas are a bread shell filled with any number of savory or sweet ingredients, whether that be meat, cheese, vegetables, or fruit. Empanadas came to Spain from the Moors, who conquered the Iberian Peninsula in the 700s and ruled for several centuries. One theory is that empanadas originally come from samosas. Today, empanadas are part of a family of hand pies that include calzones, samosas, and the Cornish pasties common in upper Michigan, among others.

When wheat and empanadas were brought to the Americas, it was only natural for pumpkins to make their way into the folds of empanadas. Pumpkins originally come from Central America, where they’re called calabaza, and the crop has been an important part of the Central American diet for more than 7,500 years, according to the BBC. The Yucatan Times notes that pumpkins have been used for just about every type of food — tacos, quesadillas, soups, and enchiladas, to name a few — for thousands of years in what is now Mexico. 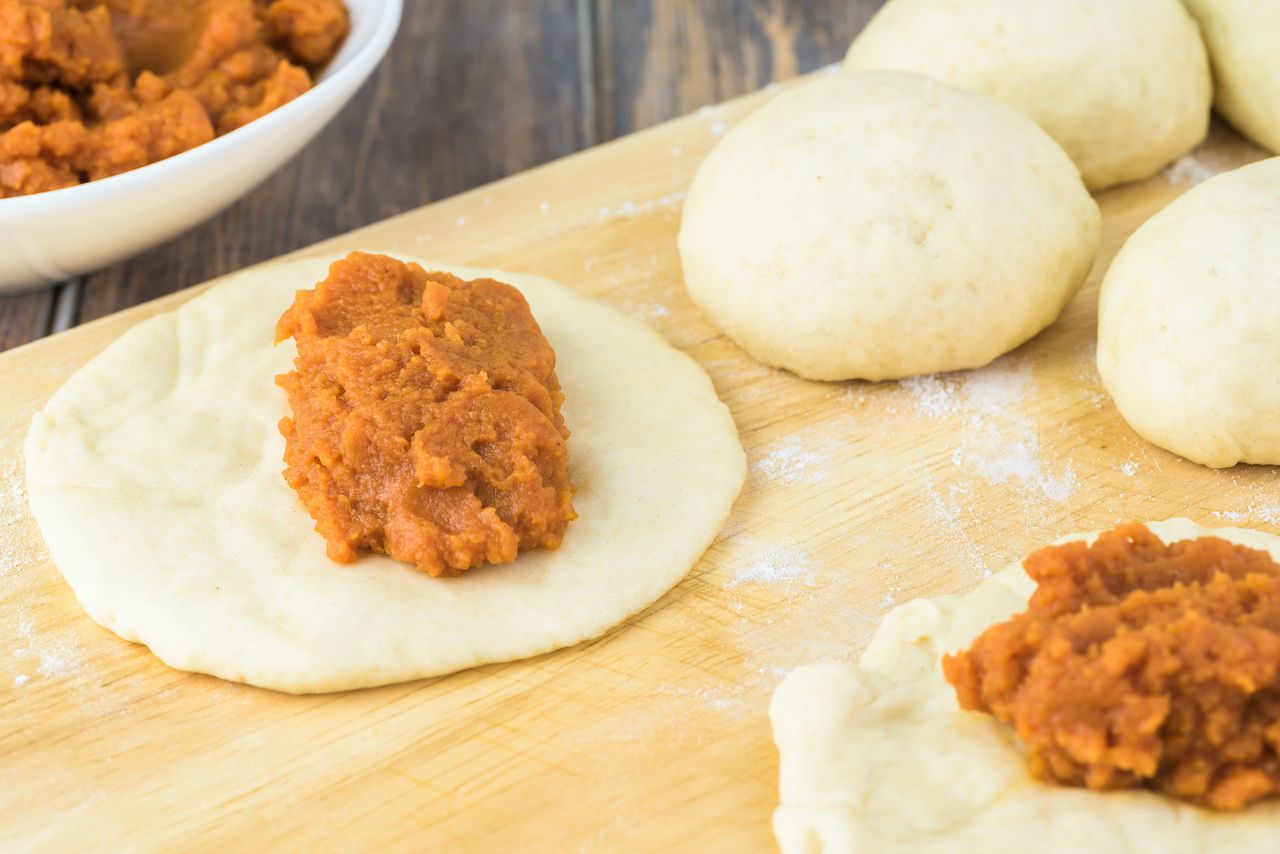 While many cooks and chefs today make pumpkin empanadas using canned pumpkin, including Casares, they’re still a seasonal dessert. Fall is, after all, the season of pumpkin — or more often pumpkin spice. It’s also the time of year when temperatures drop enough to make baking a more manageable task compared to baking in the hot Southwestern summers, Casares adds.

Ruben Ortega, the executive pastry chef for H-Town Restaurant Group in Houston who grew up in Mexico City and Puebla, Mexico, says the empanadas are usually made starting in October.

“We like to add pineapple to ours for an added sour kick,” Ortega says. “Empanadas are a very traditional Mexican pan dulce, the most traditional are pineapple and apple. We make ours with a Mexican calabaza called tamalayota. This type of pumpkin is also used for the very popular dulce de calabaza en tacha during Dia de los Muertos holidays in Mexico.”

Cinnamon and brown sugar are essential, though family recipes for pumpkin empanadas in Mexico and the Southwestern United States vary. Casares says her mother and grandmother made the pumpkin filling by feeling without worrying too much about measurements, instead adding spices to fit their taste. Casares occasionally makes the empanadas from scratch using whole pumpkins, but it’s a lot of extra work. Just be sure to get cans of pack pumpkin — rather cans of pumpkin pie filling — if you go the canned route so that you can add your own spices and better control how sweet the dessert ends up.

If you’re in the Southwest, or if you’re looking to add a little Southwest flavor to your holiday dessert spread, pumpkin empanadas are a delicious option with a long, globe-spanning history.

Food + DrinkHow Barbecue Takes Over the Thanksgiving Dinner Table in Texas
Tagged
Food + Drink Holidays
What did you think of this story?
Meh
Good
Awesome