No fewer than five festivals in Spain license participants to lob food at one another. In fact, at these particular festivals, throwing food is how you participate.

La Tomatina is the most famous. The annual tomato fight, which results in over 200,000 pounds of crushed tomatoes sloshing around the streets of Buñol, has been held outside of Valencia on the last Wednesday of August since 1945. Ticket sales were introduced in 2013 to cap attendance at 20,000, which is double Buñol’s permanent population.

The following Friday, about 70 miles south, a similar battle involving garnacha tintorera grapes ensues in Pobla del Duc. Flour and eggs are the ammo of choice in Ibi during Els Enfarinats every December, and Batalla del Vino participants splash wine around Haro, in La Rioja, every June. There’s even a day in March dedicated to pieing people with meringue in Vilanova i la Geltrú, near Barcelona.

Critics of La Tomatina have questioned the festival’s sustainability. Any event that uses literal tons of food for anything other than consumption is subject to the same criticism. Yet these festivals are not entirely frivolous: They’re expressions of Spain’s food culture, from farm to table to squished all over the sidewalk. 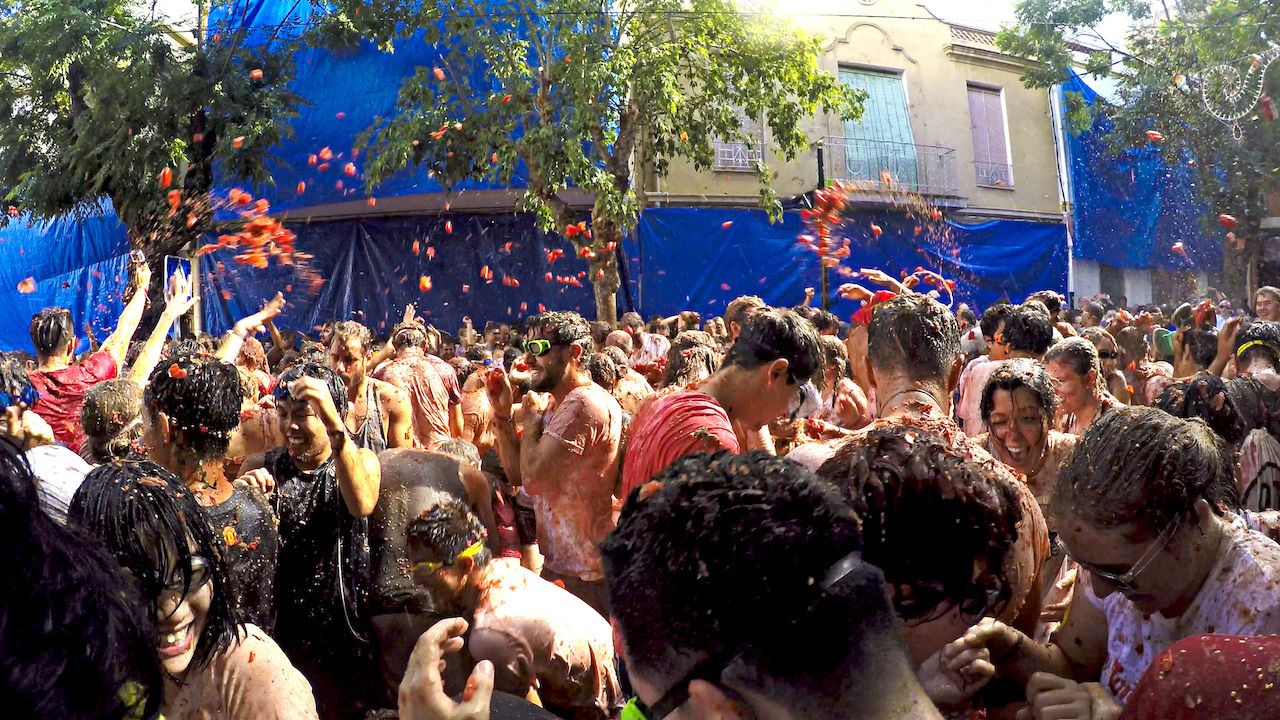 Murky origins are a theme of Spain’s longest-running food fights. Three of the oldest have roots in Christianity, though they’re largely viewed as cultural festivals today.

Ground for Haro’s annual wine battle was laid in the sixth century when pilgrims began visiting San Felices de Bilibio’s burial site in the cliffs a few miles from town. A hermitage was erected there in the 18th century, marking the spot where the Batalla del Vino has officially commenced every June 29 since 1965.

Winemakers have existed in La Rioja since the Roman Empire. Some sources cite the practice of using wine in place of water during baptisms at the hermitage around the 20th century as the battle’s inspiration. Another origin story ties it to an argument between Haro and neighboring Miranda de Ebro over town lines. This might explain why the mayor of Haro plants a flag outside the hermitage, where participants also say mass, before the wine fight begins.

Carnival is behind La Merengada, the annual meringue war in Vilanova i la Geltrú. It’s unclear when residents flung their first fistfuls of meringue, but every year on Fat Thursday, the Catalan city puts its own spin on feasting before fasting the day before Lent: Kids get the day off school, everyone assembles for a food fight, and when all the meringue is gone, participants are rewarded with free-flying candy during the Batalla de Caramelos.

Ibi’s famous flour fight on December 28 has looser religious ties. It has been held on the Day of the Holy Innocents, which commemorates the children massacred by King Herod in a New Testament story, for over 200 years. Now, the date is viewed similarly to April Fool’s Day, with the flour fight imitating a coup between Els Farinats (“the floured ones”) and La Oposicio (“the opposition”). Eggs and fireworks help turn the town center into a cakey mess, which is cleaned up only after a series of ballroom dances restores peace in the early evening. 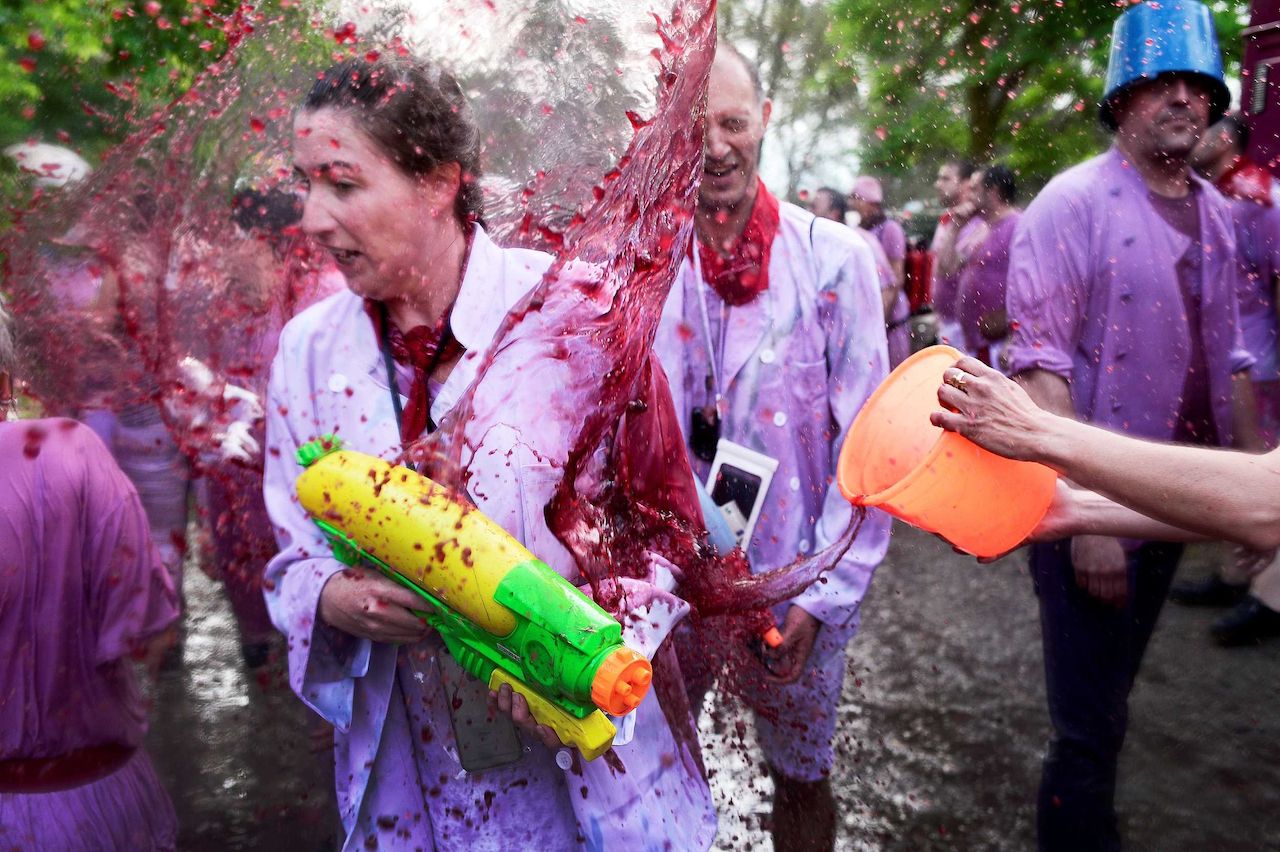 Agriculture is the backbone of Pobla del Duc’s local economy. Grapes have historically represented the majority of the city’s income, and La Raima has marked the end of the harvest since the 1930s. Legend has it that the battle began as a playful fight between growers who had excess garnacha tintorera grapes, which are used to make Alicante Bouschet wine, at the season’s close. Now everyone gets involved. As many as 200,000 pounds of end-of-season grapes are dumped in the town square on the last Friday in August for anyone to throw.

During La Merengada, regional ingredients also feature more conventionally at the traditional post-fight meal. Meringue and candy are followed by xató, a traditional Catalan salad made with tuna and a nutty, garlicky sauce. No single dish represents the Batalla del Vino or La Tomatina, but both festivals are bookended with ample meals and merriment. Revelers often make a weekend out of La Tomatina, and on the eve of the Batalla del Vino, the people of Haro take to the streets to eat, drink, and party before their early-morning pilgrimage.

The problem of sustainability 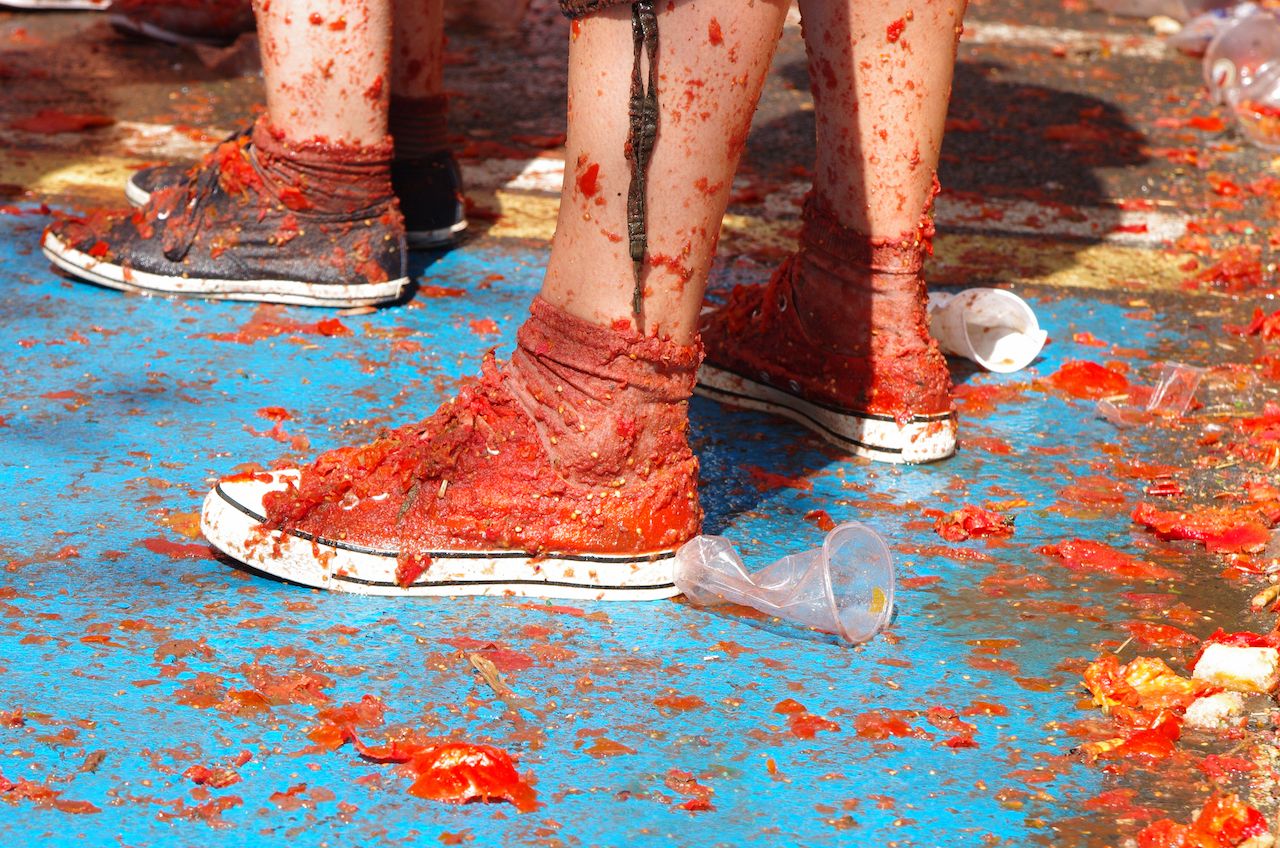 None of Spain’s food-throwing festivals has attracted as many travelers, or critics, as La Tomatina. Yet, in its own way, the tomato fight also pays tribute to Spain’s agriculture.

The most popular theory behind La Tomatina’s origin is that a group of young people threw the first tomatoes during a separate parade in 1945. The tradition stuck, and as the tomato-throwing festival grew, the city looked to Extremadura, a region about 350 miles west, where tomatoes are abundant and sold cheaply due to their poor quality.

According to Buñol’s former mayor, who defended the festival against criticisms of food waste in 2016 after Nigeria’s staple tomato crops were ravaged by Tuta absoluta moths, these tomatoes would not otherwise be consumed, even at their ripest.

“If you look at the garbage bins in Spain,” he told the BBC, “there is more waste thrown away every day than the tomatoes used at La Tomatina.”

La Tomatina’s nearly spoiled tomatoes and La Raima’s excess grapes may not be going to waste, exactly, and no one seems to be decrying the wine spilled during the Batalla del Vino. But the ethical implications of events that inherently waste food, in Spain or otherwise, remain open to scrutiny. Perhaps, in an increasingly sustainable era, these celebrations will evolve to focus more on making meals than making messes.

But whatever the future has in store for Spain’s big, public food fights, the intention behind them will surely stay the same: to bring people together over food, in true Spanish fashion.

Food + Drink9 Dishes That Prove Andalusia Is the Best Region in Spain for Food Lovers
Tagged
Festivals Food + Drink Spain
What did you think of this story?
Meh
Good
Awesome