When Javier Vallès Osborne was a boy in Barcelona, he struggled to cram, chew, and swallow 12 grapes, one every two seconds, at midnight on New Year’s Eve.

“It was una p—a,” says Vallès, speaking in Spanish and using a word best left unprinted, which essentially means it was effing hard. “The grapes were super big and with seeds. I didn’t want to eat the seeds, but it had to be the whole thing.”

Vallès was simply following in the tradition, celebrated across Spain, of eating one grape with each chime of the clock tower of the Royal Post Office in Plaza del Sol, a central square of Madrid. Much like Americans might watch the ball drop at midnight in Times Square, Spaniards tune to the country’s capital for the 12 chimes of the clock.

Tradition has it that each chime represents a month of the year, and that consuming all 12 grapes at each chime of the clock on nochevieja — which means the night of the old, outgoing year — will bring good luck in the year to come.

“You have to swallow everything,” Vallès says. “If you end up with grapes left in your mouth, you will have bad luck.”

Eventually, Vallès says his mother, who hails from a wine producing family in southern Spain, relented, allowing the kids to take the seeds out from the grapes beforehand. Not long after that, Vallès said his brother started peeling the grapes in preparation for the first stroke of midnight.

Truth be told, it wasn’t until I found myself trying to jam 12 hefty, seed-packed grapes into my mouth on a New Year’s Eve in the mountains outside of Barcelona a few years ago that I understood why anyone would ever want to peel a grape.

Spain’s year-end grape of choice is the green Aledo variety that’s harvested in November and December. While it may resemble the seedless green grape with tissue-thin skin that you find in all US supermarkets, it is anything but. Although not as thick as the peel on the purple grapes you find in Spain — it’s covered in paper while on the vine to slow maturation, a process that gives it a sweeter taste and a slightly thinner skin — the Aledo is still a mouthful.

Gloria Balil, another Barcelona native, says that it’s a matter of personal preference for people to peel their grapes.

“I personally don’t think it’s necessary, but I respect everyone’s taste,” she says diplomatically. Balil says she doesn’t suppose a person’s decision to peel a grape or not would affect their luck for the coming year, but rather it’s a question of comfort.

Nowadays, you can actually find tiny tins of 12 seeded and peeled grapes sold at the grocery store in Spain in the late days of December. That, Balil opines, is going a bit far.

“Of course we Spaniards are how we are and if we see that someone says, ‘No I want them peeled, I want them without seeds,’ we think they are being fussy,’” says Balil. 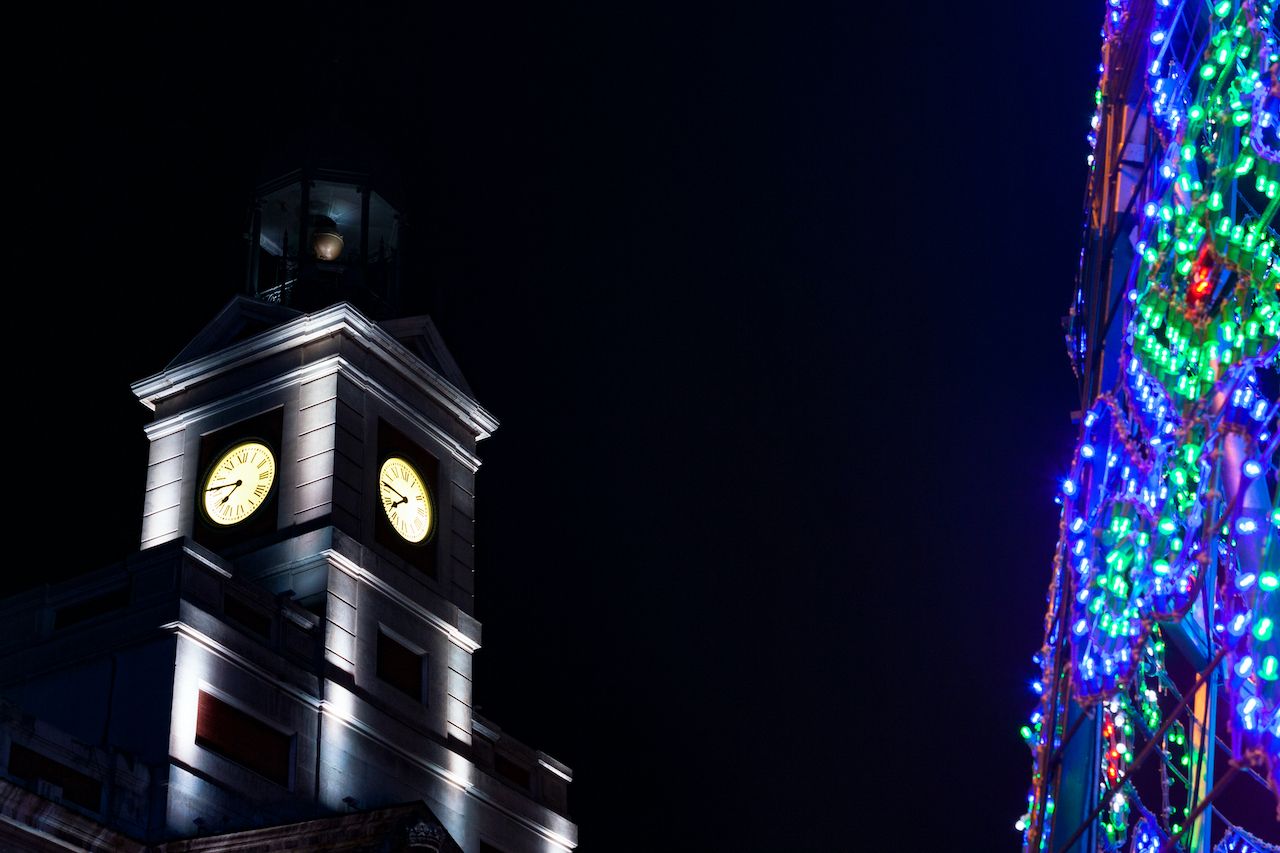 But where did this idea of eating grapes come from in the first place?

Common lore was that just over a hundred years ago, in 1909, grape growers in the Alicante region of Spain had a bumper crop and invented the concept of December 31 grape eating to encourage sales.

A few years back, the Spanish media started debunking that theory — or at least part of it. In 2012, Spain’s national paper,ABC, found written accounts of New Year’s grape eating in the late 1800s, and even pointed to a 1906 article in ABC itself about Madrid residents eating the grapes at the twelve strokes of midnight.

“According to the adherents of the system, eating them at that precise moment augurs the possession of money,” the 1906 article reads.

They were apparently copying the Spanish upper class trend of eating grapes and having Champagne at midnight, a tradition they learned from the French. The part that was new was trying to eat them timed to the tolls of the clocktower.

Where the Alicante growers come in, apparently, is in successfully bringing this New Year’s custom to a broader audience. And success they had. Today, according to ABC, up to two million kilos (4.4 million pounds) of grapes are eaten every year in Spain on December 31.

It just isn’t New Year’s in Spain without the grape munching. “It’s inconceivable not to do this tradition at New Year’s,” Vallès says.

He notes that it is such an integral part of ringing in the coming year that even in the regions that seek more independence from Spain, like Catalonia and the Basque Country, everyone still eats the grapes at midnight on December 31. They may time their grape eating to a different clock in a local town being aired on a channel in the Catalan or Basque languages — rather than watching the clock tower in Madrid on the main broadcaster — but they are still going to eat those grapes.

Vallès says there is even an option for those who are diabetic, as his father was. He used to eat twelve olives at midnight, so he wouldn’t have to worry about a dozen bites of sugary fruit in rapid succession.

Either way, it’s only once the grapes are eaten that everyone grabs their glasses of Champagne to ring in the New Year.

“For us, when you have the last grape, you drink Champagne and toast one another and it concretely begins the process of celebrating the new year, giving everyone kisses, calling grandma, and so on,” he says.

Vallès does remember, though, the time a few years back when the announcer forgot to tell folks at home that the chiming had begun. Even worse, says Vallès, was the year they rang the bells too fast.

“It was a national drama. No one could eat the grapes at each chime” Vallès says, laughing.

And Vallès likes to laugh. As he sees it, frantically trying to eat twelve large, seed-packed grapes as the bells are relentlessly chiming, one by one, is “a fun kind of stress.”

“As you are doing this, you are all laughing, ‘Oh yes. Oh no!’ Then you end up with everyone laughing to see who missed it and joking about who will have bad luck,” he says.

“That way,” says Vallès, “you start the year laughing.”

Food + DrinkEverything You Always Wanted To Know About Tapas but Were Afraid To Ask
Tagged
Food + Drink Holidays
What did you think of this story?
Meh
Good
Awesome