This is one of the most-asked questions by foreigners whenever they eat something in Spain. I don’t blame them — guides to tapas usually include unnecessary details about their origins and how to eat them that only make understanding what tapas are more complicated. This article won’t be an ultimate guide but will try to at least solve some of the most common doubts and dispel a few myths. As with everything in Spain, remember things will be different depending on the region. Play it safe by sticking to the always useful when-in-Rome strategy. Or, as we say in Spain: donde fueres, haz lo que vieres. 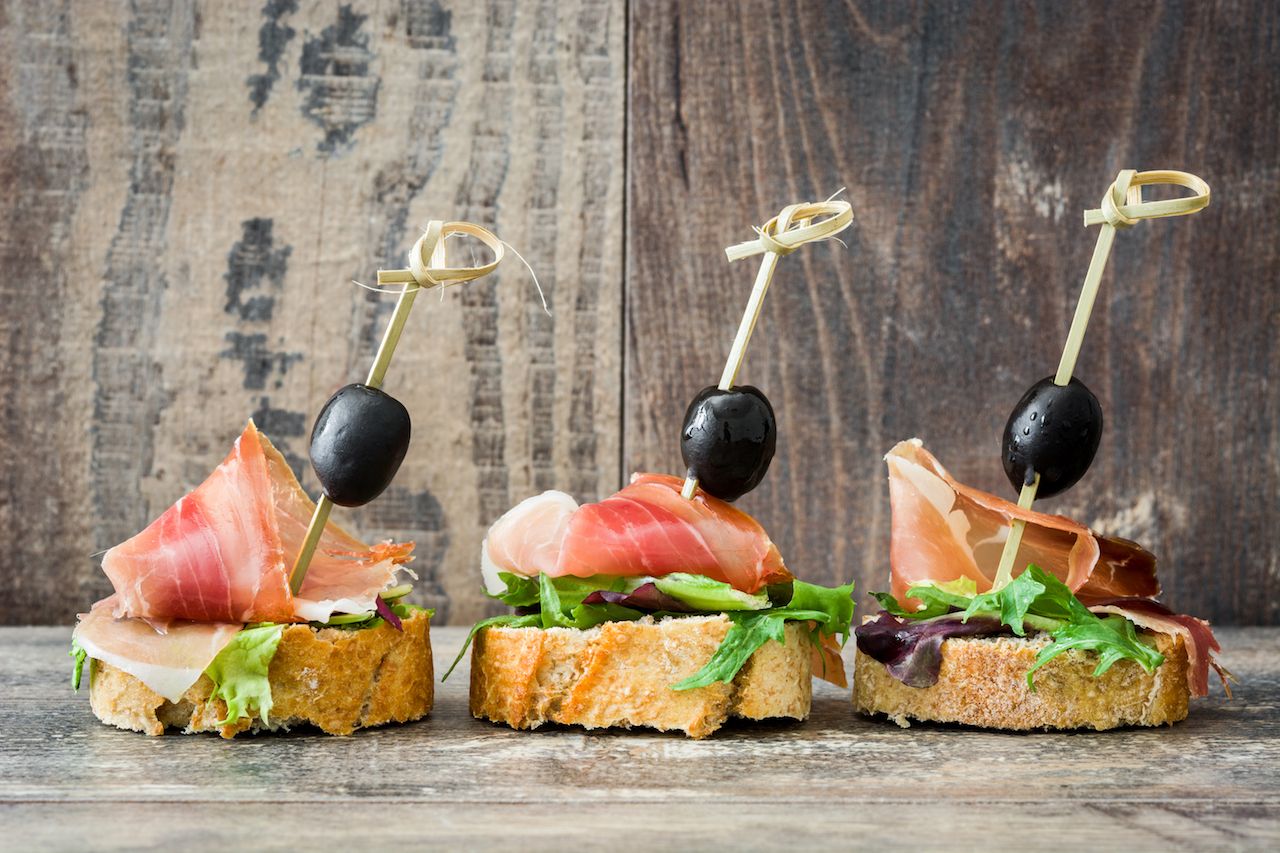 Tapas are a small plate of bite sized snacks, usually served when you order a drink. While their size can vary, they’re usually smaller than what you would have for a main course (there are some exceptions to this rule, however). There are no rules for what tapas can be; they are sometimes meant to be shared and eaten with toothpicks, but they can also be small individual dishes with their own cutlery, and other times its perfectly acceptable to eat tapas with your hands.

They will also take different forms depending on where you are in Spain. Basque Country’s pintxos are one of the most popular variants: they usually come on top of a piece of bread and use a toothpick to keep all the components together.

Are tapas free in Spain?

In Spain, there are free tapas and the tapas you order and pay for. You’ll get the first one just by ordering a drink and it can be anything, from a small bowl of olives to a fully-cooked dish of callos, a stew with tripe and chickpeas. In those regions where tapas are free (Andalusia, Galicia, and León) the portions are generous. It is possible, if you choose the bar wisely, to have lunch or dinner paying only for drinks. But you might end up a bit tipsy.

Then we have the tapas you need to pay for; these are ordered the same way you would order your drink or a full size meal from the menu. Tapas bars usually have a list of the available options somewhere visible or directly on the menu. Note that these tapas you order and pay for are usually meant to be shared among several people.

How to order tapas

The bar itself will make its own preferred modality clear. If there’s a list or a menu, you can choose from there; if you see the tapas disposed at the bar, you can just point at the ones you want. Nothing too complicated, as you can see. In Spain’s official tourism website they say there are places where you can directly grab the things you want from the bar, but I’ve never seen that happening and none of my friends from different regions of Spain has seen it either. Play it safe and talk to a waiter before acting as if the bar was some kind of buffet.

When it comes to paying, usually the waiter kept track to what you have eaten and will tell you how much you owe. If you’ve eaten pintxos, however, you might encounter a different method — they count the sticks left on your plate and make the calculation. No, it’s not a good idea to make some of these sticks disappear to try and pay less. Waiters are not stupid.

Is it compulsory to eat them at the bar? 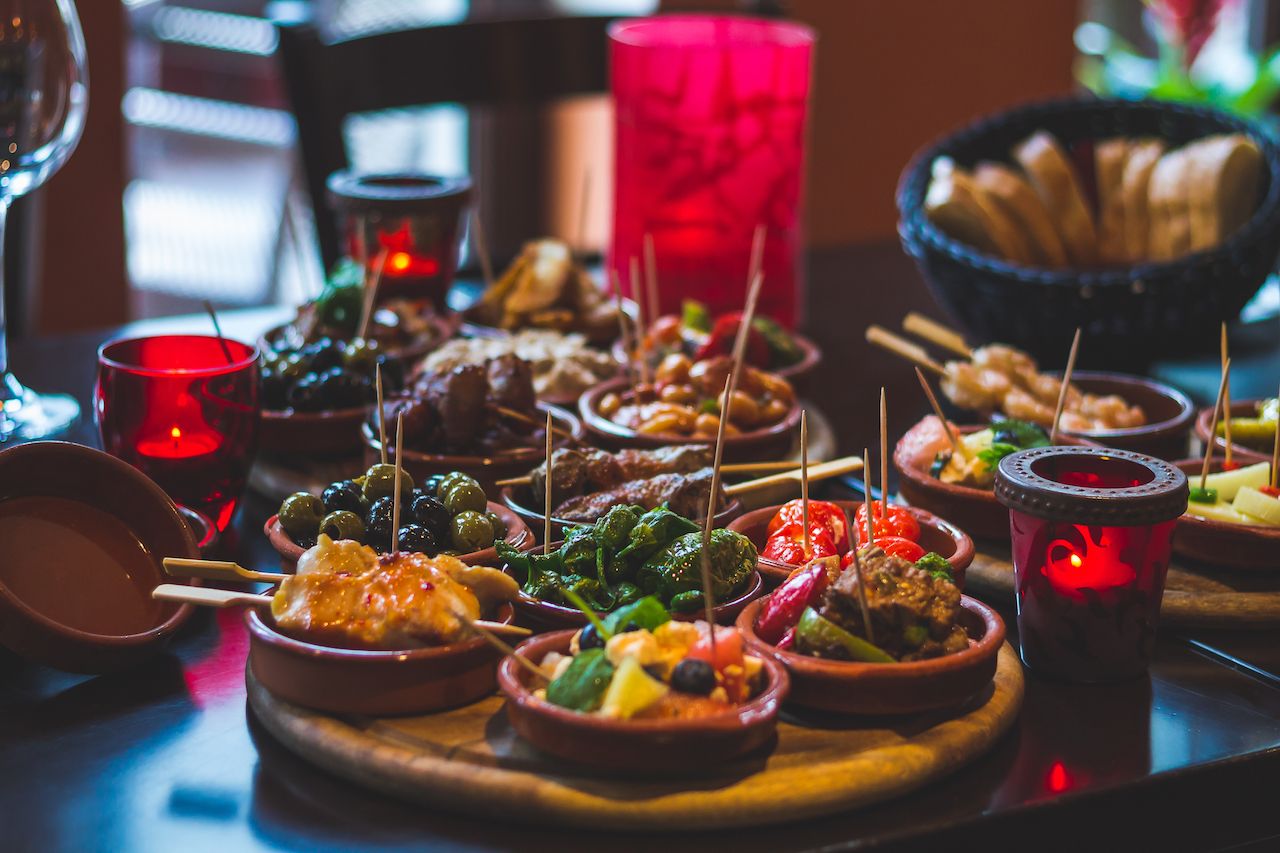 You might encounter some tapas place with this rule, but it’s not the usual. You’ll have the same tapas rights if you sit on a table.

Can I choose which tapa I want?

Obviously, if you pay for it, you can. The free tapa is usually chosen by the bar you find yourself in, but there are some regions — Almería, for example — or particular bars where they will offer you several options to choose your free tapa from. If you don’t like what you’ve been served for free and won’t eat it, tell the waiter right away. If you’re lucky, you might get something different in exchange.

What tapas are most popular? 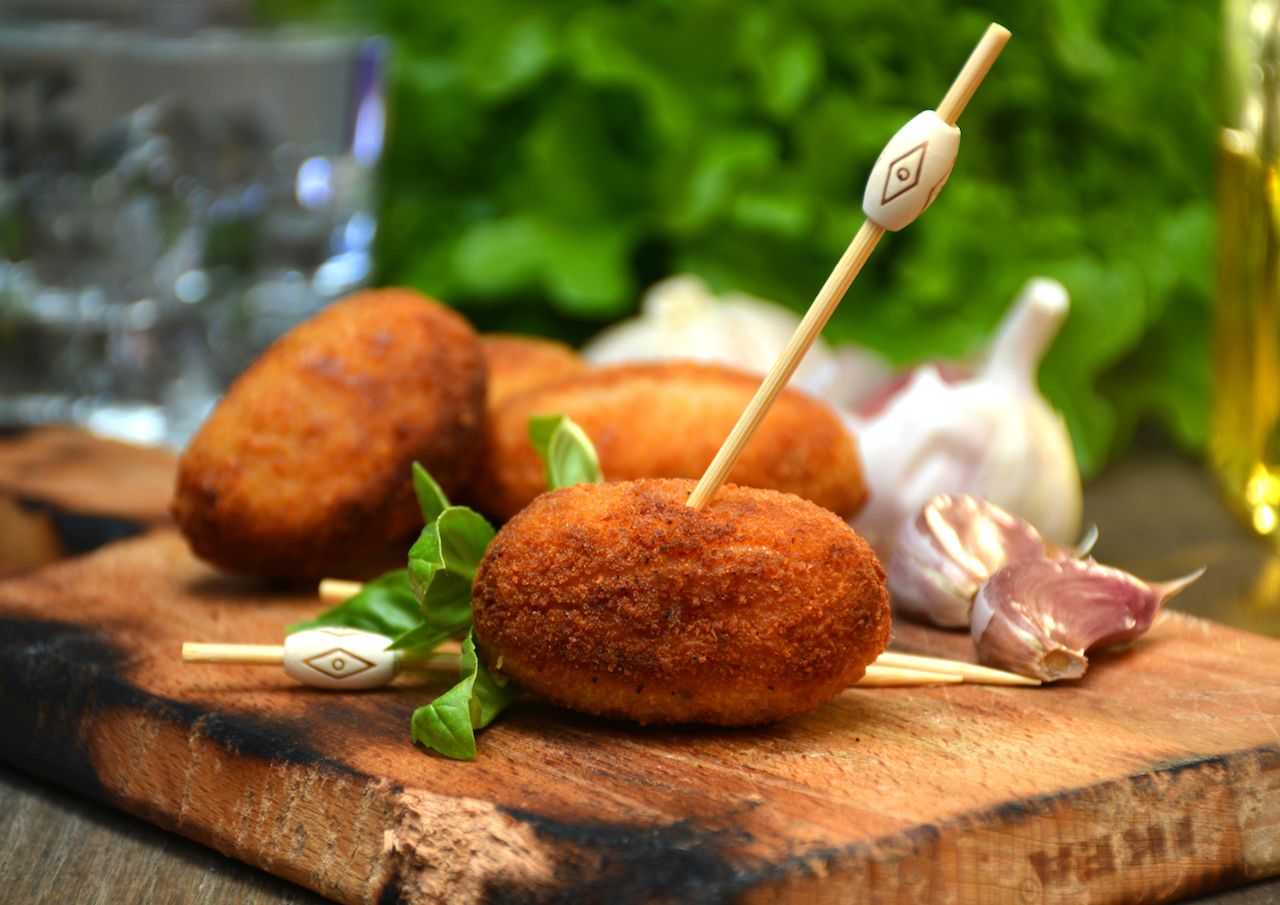 Tapas can range from something as simple as a bowl of chips to something more complicated like a fully cooked meal of meatballs, ensaladilla, or callosk, but any type of food can be transformed into a tapas. These are some of the most popular options: 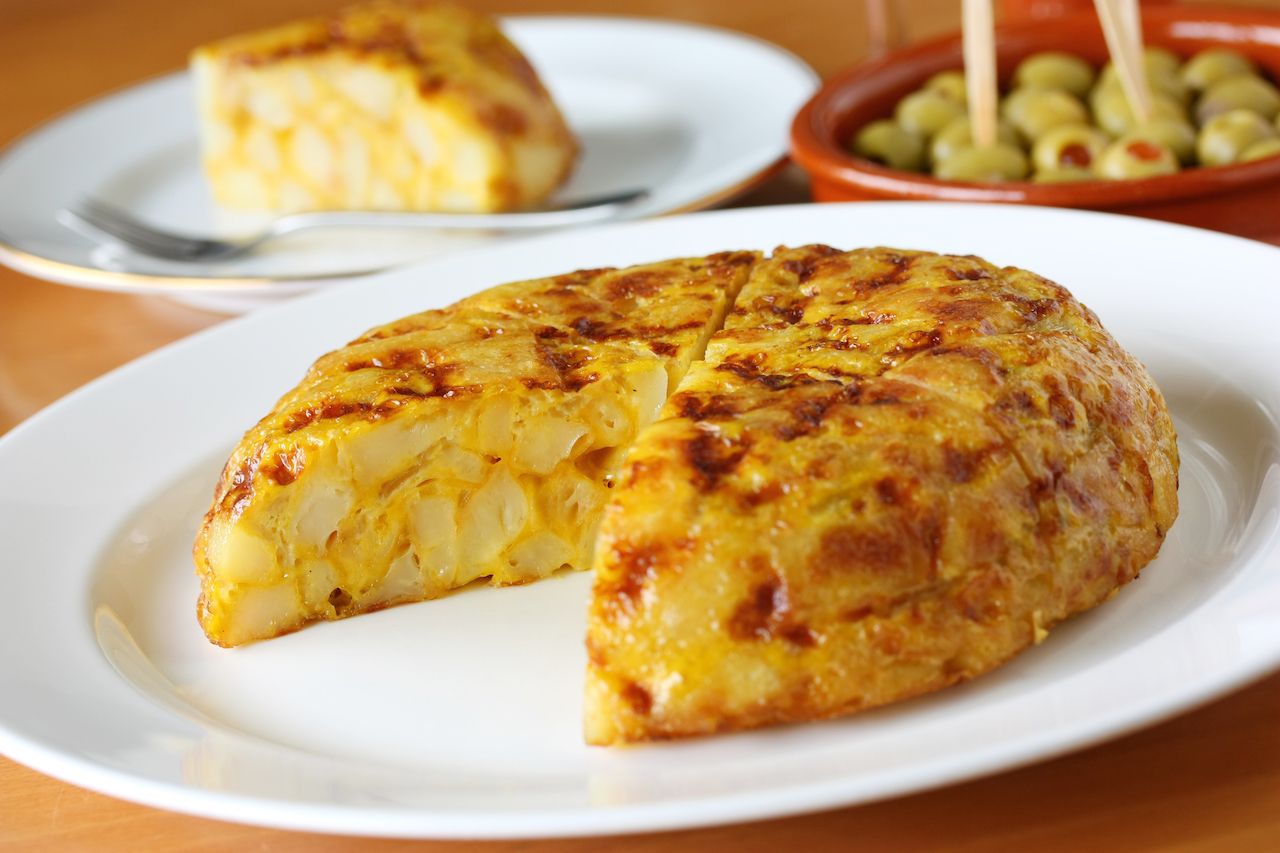 Not to be confused with a tortilla from Mexico, tortilla española is made with potatoes, onions, and eggs. It’s all cooked in oil and served either hot or room temperature. “This is one of the most famous tapas,” says Nico Lopez, research and development chef at Mercado Little Spain. “It is an iconic dish in Spanish gastronomy, one that people recognize and seek out.”

Commonly made with ham (croquetas de jamón), these little fritters are a common accompaniment to a light drink. A Spanish croqueta skips the potatoes and instead uses a thick bechamel sauce and another main ingredient. Other than ham, other options include, but aren’t limited to, cheese and spinach (croquetas de espinacas y queso), cheese (croquetas de queso), and seafood (croquetas de marisco).

A simple small plate that shouldn’t be underrated. Patatas bravas are fried potatoes with a spicey salsa brava sauce. If served with an aioli, it’s patatas aioli.

Thin slices of squid fried with a light batter and served with garlic aioli. 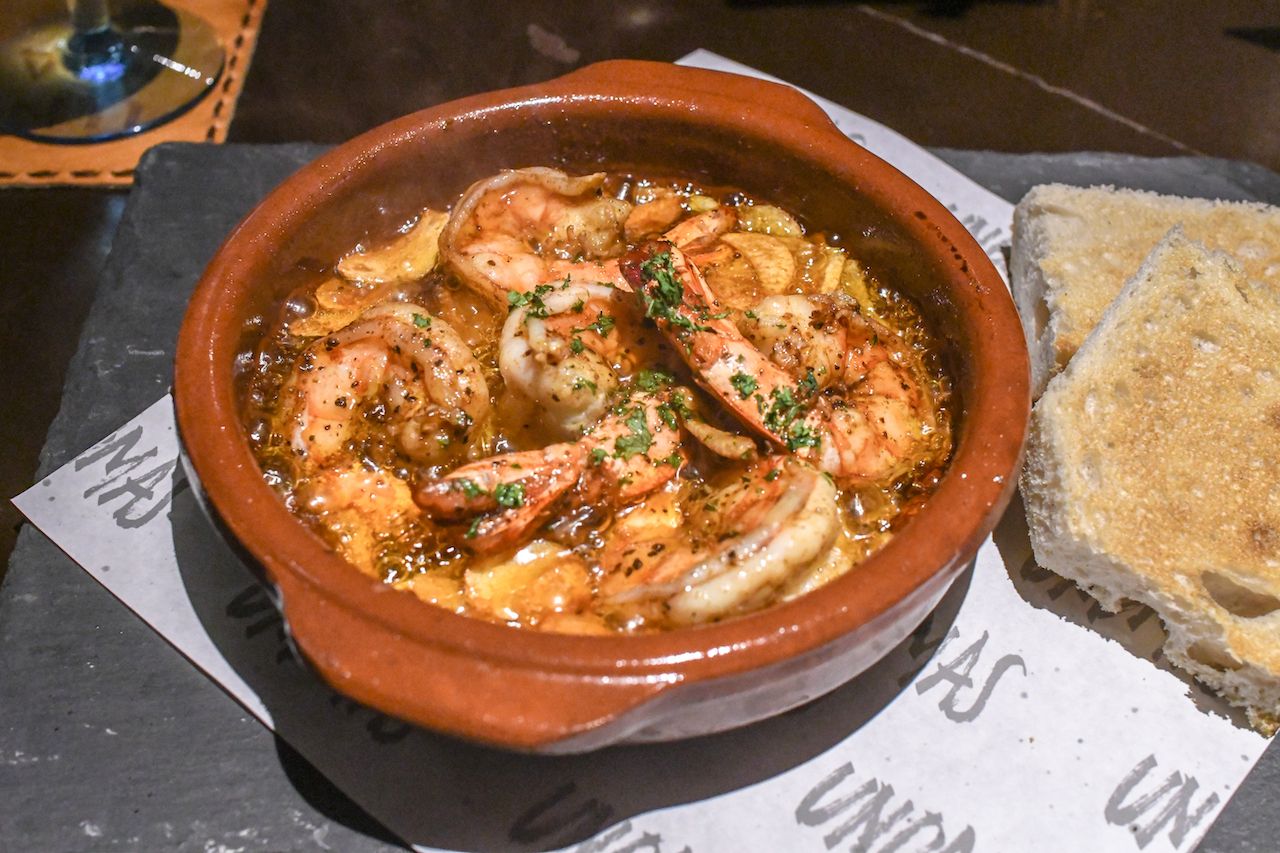 Literally translating to garlic shrimp, this typical tapas dish is made with shrimp, garlic, and spices. “In this tapa you will find amazing umami from the combination of the sweetness of the shrimp, spiciness of the guindilla (a chili pepper from Spain), the bittersweet flavor from the caramelized garlic, and the aromas of the brandy and bay leaf,” Lopez says.

Best when fresh tomatoes are available, pa amb tomàquet is simply toasted bread with tomato, olive oil, garlic, and salt. Cured meat and cheese sometimes come on the side or on top. It’s often incorrectly written by people who aren’t Catalan as pan tumaca.

When did Spaniards start eating tapas?

Spaniards haven’t been eating tapas for long. It appears that in Spain — tapas, as we know them now, are a recent inovation, as they started after the Spanish civil war.

But this doesn’t mean that’s the origin of tapas. It seems that tapas come from an old tradition of eating small bites of food to keep hunger at bay. The funniest theory says everything started when the king Alfonso X of Castile was prescribed to drink several glasses of wine during the day but didn’t want to end up drunk already at noon. His solution? Eating a bit of food with every glass. There are other theories and legends: those bites of food served to hide (tapar in Spanish means ‘to cover, to hide’) the effects of alcohol; the tapa was used to cover the glass and prevent flies from jumping into the drink; etc. Just pick your favorite one.

Do I have to throw the napkins to the floor?

Small napkins sometimes come with tapas, and local legend sometimes says that the more of these napkins that are on the floor, the more locals have stopped in for a snack — marking the bar as one of the better bars in the neighborhood. In the past, locals would even discard snail shells and olive pits onto the floor, too. However, this tradition is going out of style. You still might come across bars where locals throw everything to the floor (it’s becoming less and less common, but they still exist). If you aren’t familiar with the tradition, it’s probably better to just leave the napkin on the table.

Is this how Spaniards eat all their meals?

No. At home, we prefer to eat full-size dishes instead of having to cook five different things. We do sometimes say we will have lunch or dinner “de tapas” at home, but it usually means “let’s see what leftovers we have in the fridge.” 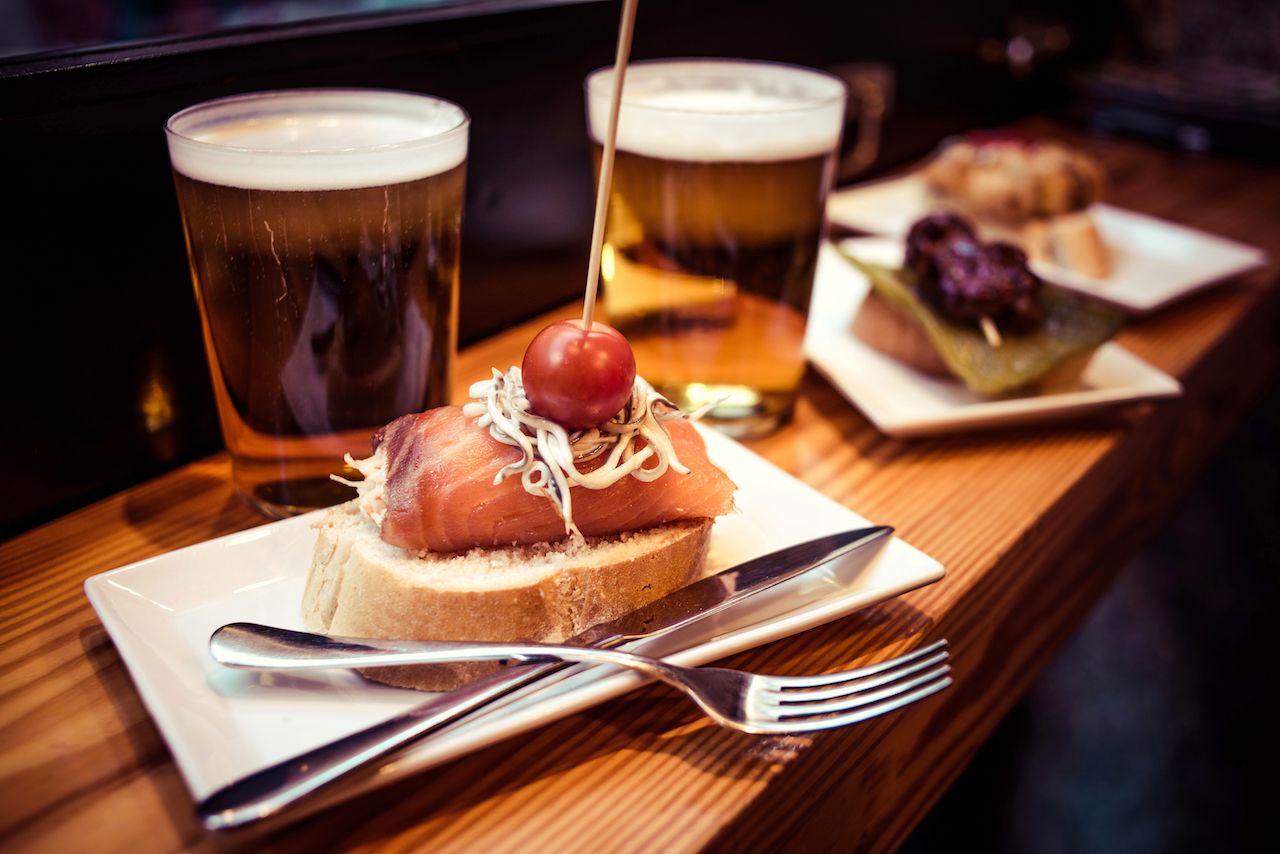 Ir de tapas, de tapeo and tapear are all different ways talking about eating tapas. Tapas come as a gift when you order any beverage at a bar. But if you’re with more people and you intend to have lunch or dinner by eating tapas (rather than ordering a full meal from the bar), you can use any of these terms to talk about tapas. Tapeo will take you from one bar to the other, and from free tapa to free tapa. You can tapear by staying in the same place just by ordering different tapas to share with your friends. You won’t end up as tipsy as with the free tapas strategy, but you can still say you’ve been tapeando or de tapas.

Can I tapear any time of the day?

The free tapa doesn’t really depend on the time of day, but if you want to have lunch or dinner nde tapas is probably best to try and do it at lunchtime or dinnertime. In Spain, this means from 1-1:30 PM to 3:30 PM and between 8:30 PM and midnight.

Is it a good idea to go to a tapas bar outside of Spain?

It is okay to go to a tapas bar outside of Spain. Tapas have become a popular way to eat lunch or go out for drinks and snack in many parts of the world, including the United States. Many cities have tapas bars where you can have a few snacks while enjoying drinks with friends — the main difference is, you will probably have to pay for all your tapas plates, whereas in Spain tapas are often free.

What is the difference between tapas and appetizers?

The difference between tapas and appetizers is subtle but important: Both are small dishes that can be served before a meal, but tapas are usually Spanish in origin and are often served with alcoholic drinks, at a bar. Appetizers aren’t always served alongside a beverage, and often the portions are larger (remember, tapas are often served on toothpicks for easy eating).

Why are they called tapas?

The name tapas probably comes from the Spanish tapear, meaning to cover. The single “tapa” means lid in Spanish, leading to legends that tapas might evolved from the practice of placing a piece of bread or ham on top of a bar patron’s beverage to block out dust and flies.

A version of this article was previously published on June 15, 2018 by Ana Bulnes, and was updated on October 16, 2019 by Nickolaus Hines.

Food + Drink11 Food Experiences You Should Have in Spain Before You Die
Tagged
Food + Drink Spain Madrid, Spain Barcelona, Spain
What did you think of this story?
Meh
Good
Awesome

14 of the Best Airbnbs in Barcelona