When travelers think of Spain, they may imagine cities like Madrid or Barcelona — Galicia rarely comes to mind. The only place in Galicia foreigners do spend any time is Santiago de Compostela, and that’s only because it’s the final destination of the Camino de Santiago pilgrimage route.

The few intrepid pilgrims who do persevere beyond Santiago de Compostela — to the lighthouse at Cape Finisterre — come to grasp what Galicia really has to offer. Here’s why Galicia is the most underrated region in Spain.

They love their wet weather. 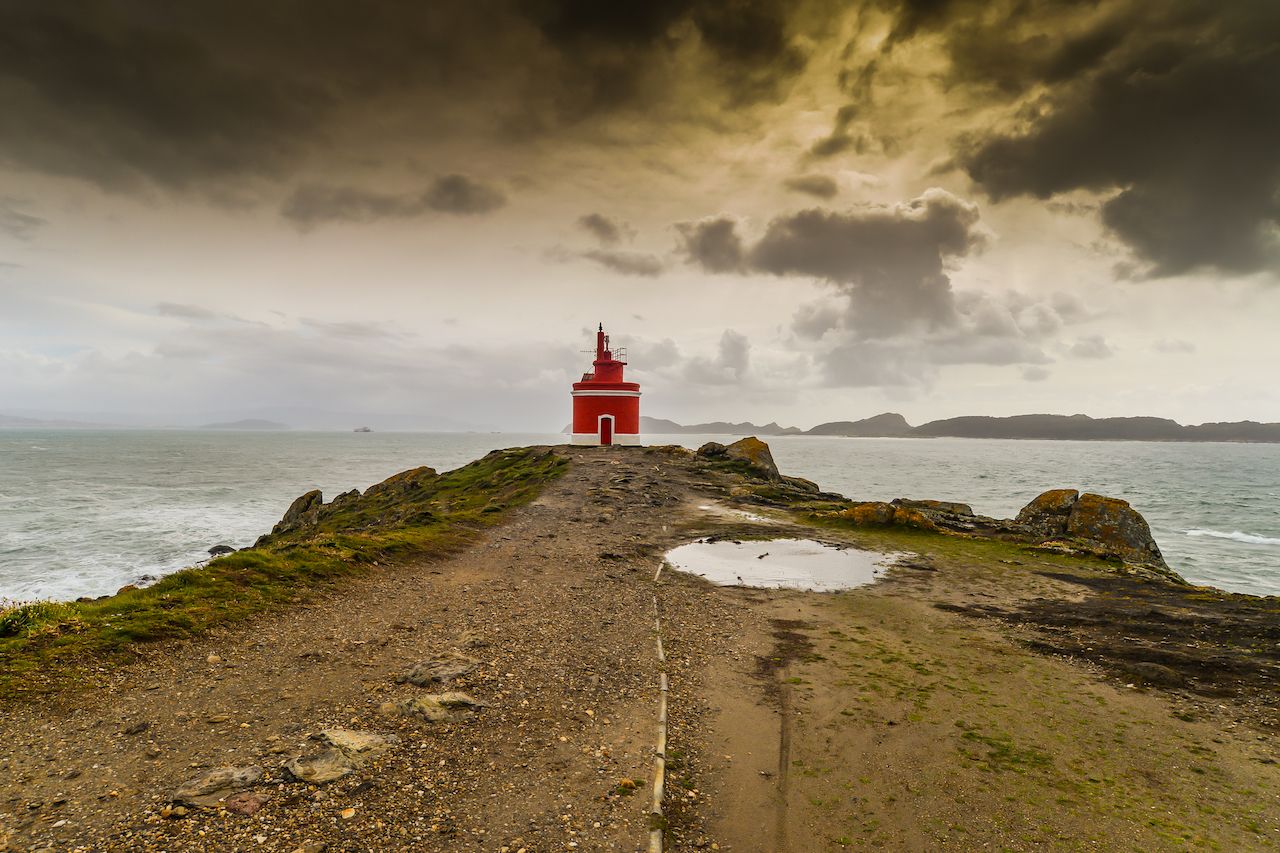 Galicia is wet and windy. This is no big secret. In fact, it’s a point of pride for people from Galicia . But while most of the year is plenty soggy, the summer months of July and August are relatively dry. In fact, San Sebastian in the Basque Country gets more summer rain than Galicia.

Still, Galicia holds on to its reputation. In three weeks in Galicia this August — explored first on foot with backpacks, then via mountain bikes, and finally in a van packed with surfboards — it rained only one day. That rainy day was the one where we mountain-biked 60 kilometers across misty, rugged terrain towards the sea. As we pedaled through the rain up steep climbs, mud splashed across our bikes, clothing, and faces, and the Spaniards riding alongside us laughed, “This is Galicia!”

Yet by 4:00 PM, as we reached the coast, the rain stopped. By the next day, the skies cleared. For the remaining 10 days, after we had traded the bikes for the van, exploring cities, seaside towns, and surf breaks throughout Galicia, we saw sunshine every day. We did, however, have cooler mornings and evenings than other regions of Spain. After a summer of crushing heat waves in Europe, that’s not such a bad thing.

The scenery is breathtaking. 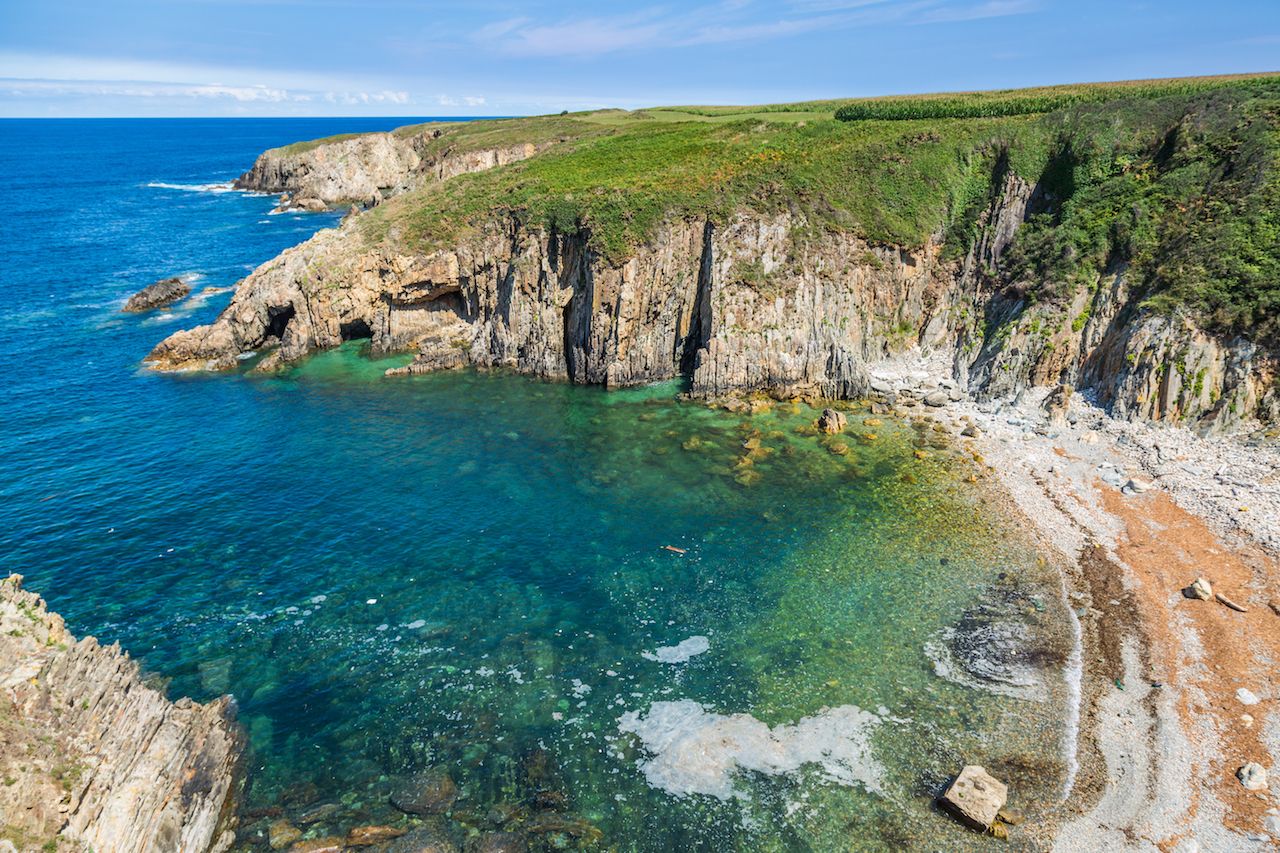 In Galicia, it’s possible to leave a nearly deserted, windswept beach full of kite-boarders, drive 20 minutes, and arrive at another empty beach, this one protected from the wind but with perfectly peeling waves for surfers. Alternatively, you could opt for a protected, swim-friendly beach with no waves at all. The combinations are endless given Galicia’s incredible topography.

Galicia’s jagged coastline looks like the branches of an old oak tree, with gnarled twigs jutting into the frigid Atlantic — confusing mariners in ancient times. With storms and thick fog in the colder months, this area earned the name Costa da Morte, or Coast of Death.

Yet the twisted, fissured shoreline means that from a city beach like Ribeira, a wide stretch that looks east towards the continent, a 30-minute drive takes you through a state park studded with pine trees to Praia do Vilar. There, you find a stunning, white-sand beach facing west toward the open sea. Add steep mountains, forested hills, small farms, and green valleys to these varied beaches, and you have some pretty spectacular scenery.

They speak Galego. And play bagpipes. 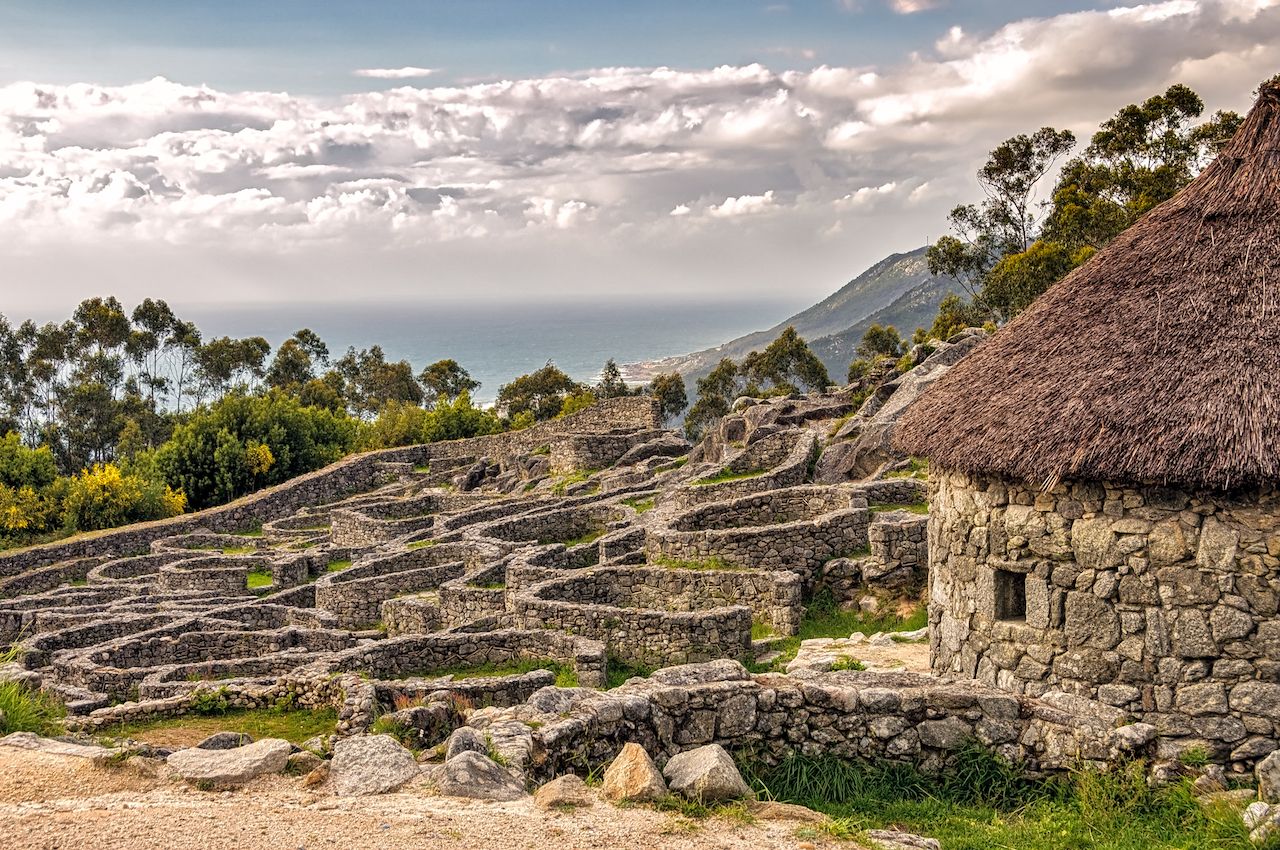 It’s the same in Galicia, where Galician — Galego, as they call it — is very similar to Portuguese yet has several Celtic words. Celts inhabited Galicia over 2,500 years ago, and that heritage of Celtic nations is still celebrated today. Galicia is a member, together with Cornwall, Wales, Brittany, and Scotland of the Celtic League. And you will hear gaitas, or bagpipes, everywhere.

The connection with their northern Celtic cousins is a big reason why Galicians are so proud of their cool, drizzly climate. Should you find yourself traversing an elevated plateau with farms, granite rocks, stones walls, and thick fog, you might question whether you’d suddenly ended up in Scotland.

The time zone is whacked.

In at least one way, Galicia is firmly a part of Spain: meal times. Like in the rest of the country, lunch is around 2:00 PM, and dinner might be at 10:00 PM. Yet Galicia has a time feature that makes these mealtimes perfectly reasonable: it’s on continental European time, even though it’s far west of that actual time zone.

In late August, the sun doesn’t come up until nearly 8:00 AM but sets after 9:00 PM. That makes it easy to skew your whole clock over a bit — so you can feel cool and local when you finish dinner at midnight.

The other plus of the crazy time zone is that locals don’t hit the beach until after lunch since the sun won’t set for a long while anyway. You can get to the most popular beach in the late morning and have it to yourself for a few hours.

The seafood is spectacular. So is the bread. 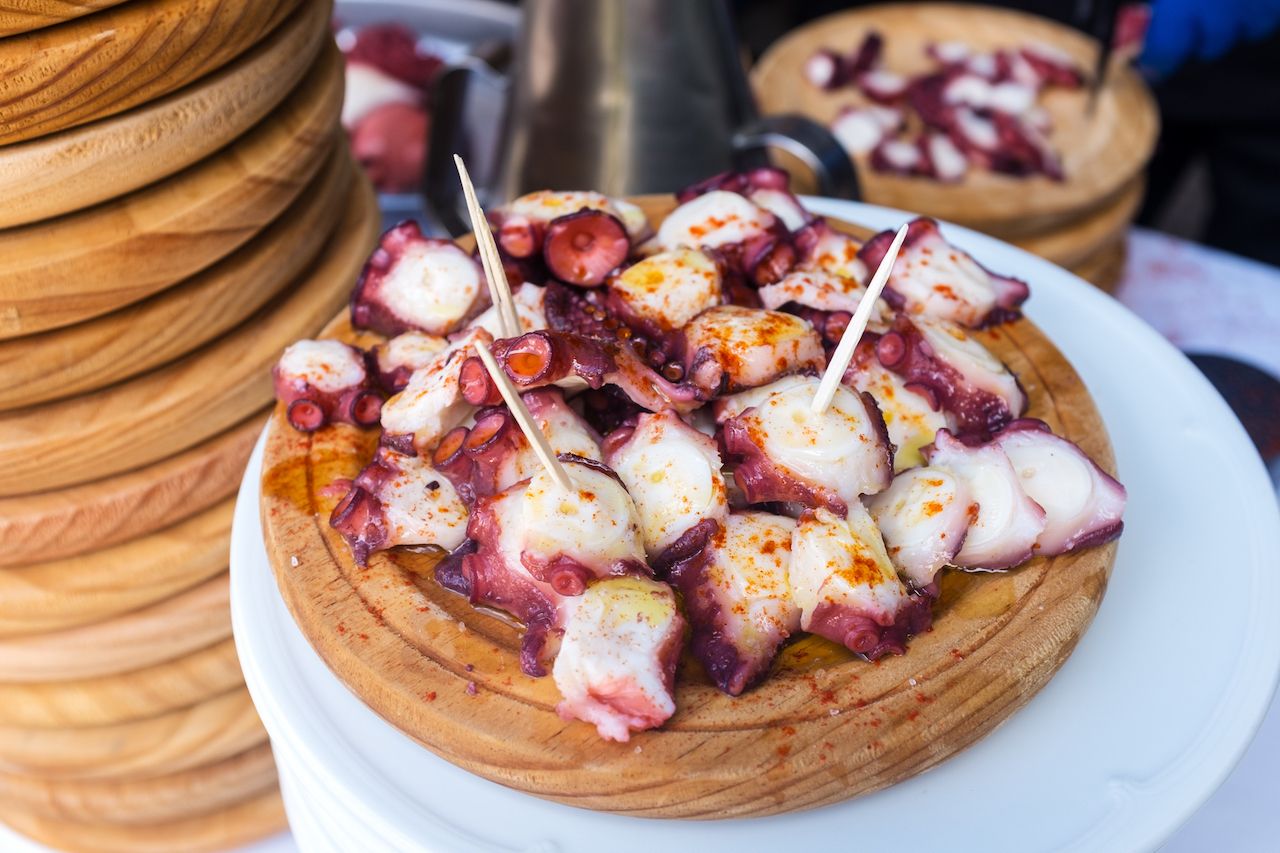 Spaniards who aren’t from Galicia have two comments when you tell them you’ll be vacationing there: “It rains a lot” and “Have the octopus.”

This August, it didn’t rain a lot. But we did have the octopus, and it was the best we’d ever tasted. We also had mussels, clams, sardines, hake, anchovies, shrimp, and unusual seafood like razor clams and barnacles. It was delicious everywhere ­– from the relaxed outdoor lunch restaurant inside the state park to the overly bright dining room in a nondescript seaside town.

Galicia’s ubiquitous whole wheat bread, sliced into thick slabs from round loaves, was not just good for soaking up the garlicky juices of the steamed mussels. It was the tastiest regional bread I’ve had in Spain.

It’s perfect for those who like to spend time outdoors. 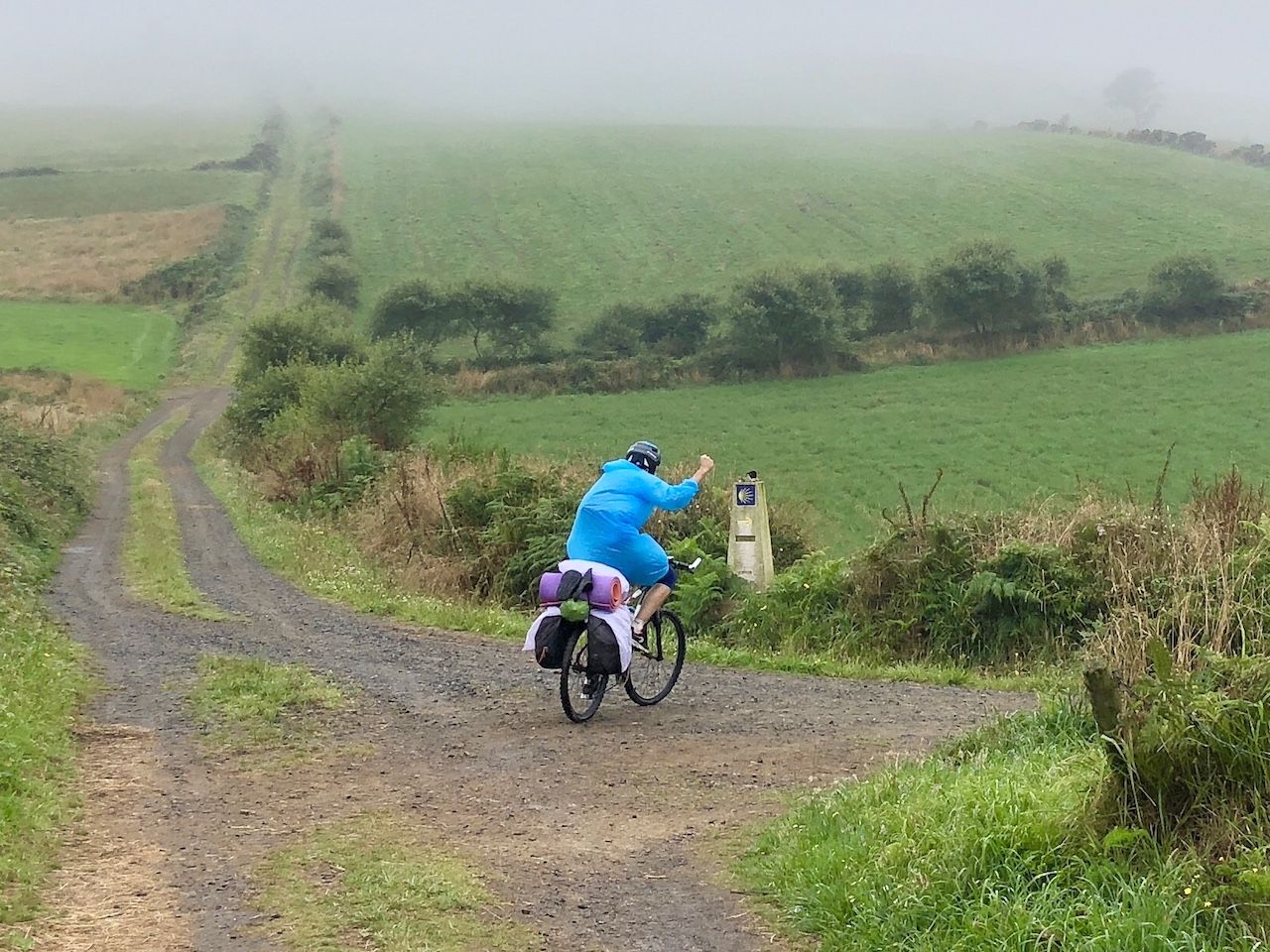 Galicia’s bread is especially satisfying if you’ve just sat down after walking 20 miles of the Camino de Santiago with a backpack. The popularity of that ancient pilgrimage route has exploded in recent years and inspired walkers all over Galicia. Some do not stop at Santiago de Compostela but persevere by trekking an additional 60 miles west to the end of the Finisterre peninsula (Cabo Fisterra).

Others then go from Cabo Fisterra (its Galician name) to Muxia, which is the actual westernmost point of the continent, and back to Santiago. Still others head north to Santiago from Portugal while some hardcore hikers skip the traditional Camino in favor of the 120-mile “Camino de los Faros” walk of the lighthouses along Galicia’s coastal cliffs and sandy beaches. Mountain bikers also travel many of these routes and plenty of other single-track trails, as well.

And then there’s the sea. Galicia is a great place for kiteboarders, windsurfers, and surfers who stake out their own beaches with the perfect mix of wind and swells. Galicia has some of the best surf in Europe. While we were at Pantin beach, an expansive cove framed by green knolls and farmland, grandstands and signage were going up for The World Surf League’s Classic Galicia Pro competition just a few days later.

Despite Galicia’s great waves, the surf scene is only now emerging. Elizabeth Lee, who owns a surf shop in A Coruña with her Galician husband, said that for years their surf school was one of three. “Now there are about 20 of them,” she said.

If it’s luxury you want, visiting Galicia may not be for you. The exception is the city of Santiago de Compostela, which was already a worthy destination with its thousand-year-old Cathedral and UNESCO-recognized old town of cobblestones, plazas, and narrow streets. With tourists and over 200,000 Camino pilgrims arriving yearly, Santiago de Compostela is well-equipped to handle every kind of traveler. It has budget hostels and elegant inns, as well as inexpensive eats and white-tablecloth dining.

But Santiago is 45 minutes from the nearest beach. If your Galicia focus is on its spectacular coast, the lodging options are harder. Camino destinations like Finisterre and Muxia have accommodations, as do bigger cities like A Coruña and Vigo, but if you want a view of the sea in smaller towns like Porto do Son or Louro, look at the Spanish sites for HomeAway and Airbnb months in advance.

As for food, just ask around when you arrive. You’ll find excellent seafood throughout Galicia’s coast. The décor may be bare-boned, or you may be lunching with a view of a local regatta — but everywhere you go, you’ll find Galicians take pride in their cooking, and they do it well.

But the wealthiest man in Spain is from there. 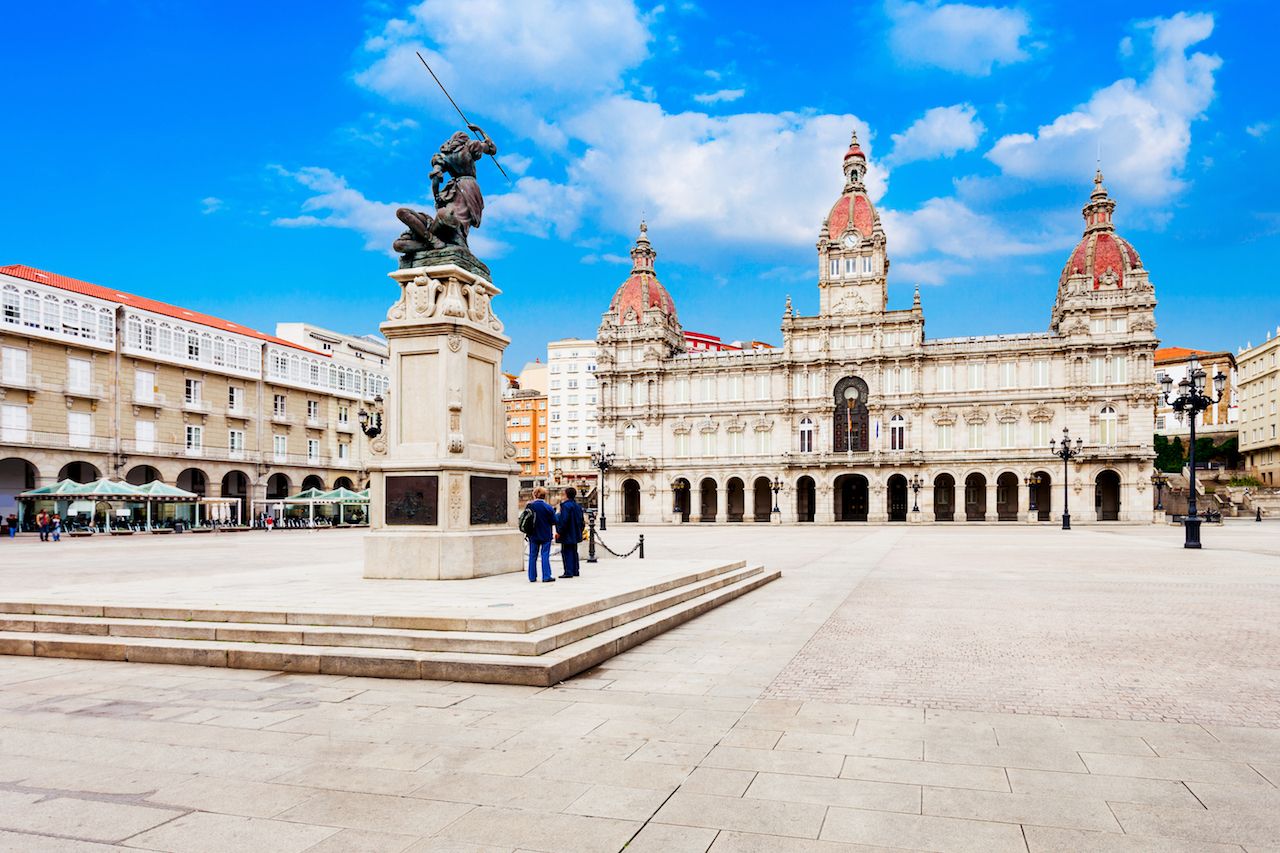 Galicia can feel like the forgotten corner of Spain, but it’s home to one of the richest men on earth, Zara’s founder Amancio Ortega. His company, Inditex, the world’s largest fashion group, is headquartered just outside A Coruña. With A Coruña’s already established wealth as a port, a fair amount of money circulates in this handsome, but understated, seaside city.

That means you can find nice restaurants in A Coruña, and in summer, its pedestrian-only, old-town streets fill up nightly. Diners at tapas bars serving “pulpo á feira” and “sardiñas con pimientos” spill out onto the streets. Also, the foreigners who come to work at places like Inditex have encouraged the emergence of a few non-Spanish dining options.

If you stroll through A Coruña’s old town in the morning, stop first for churros dipped in hot chocolate, then wander its small boutiques. Some of the best are in alleyways so narrow you could touch both walls with your hands. Look for jewelry made by local artisans, and marvel at the low prices.

After summer, things are even quieter. 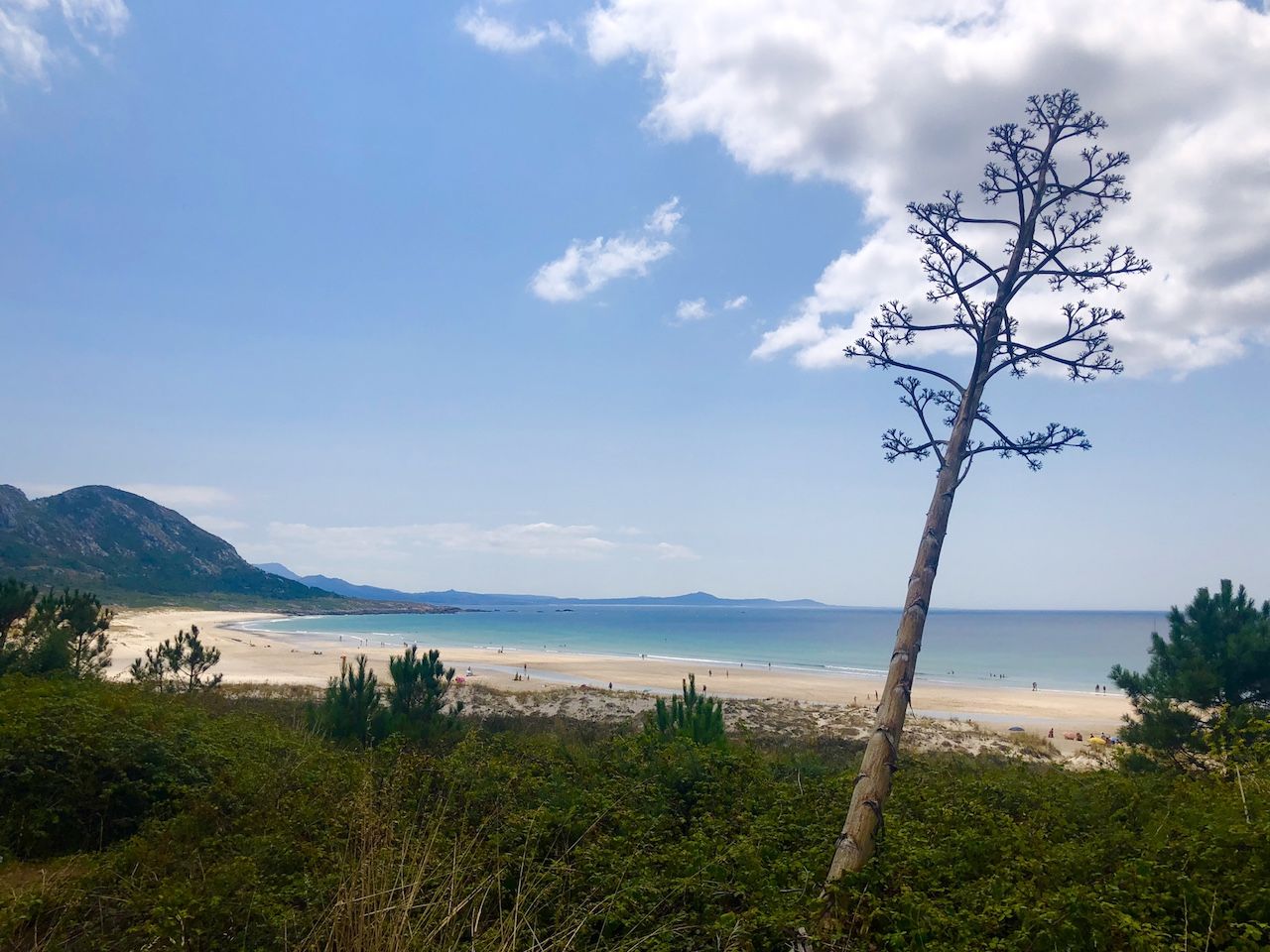 An evening walk along the beach in A Coruña is blissfully uncrowded, even at the height of summer. Outside of Santiago de Compostela, Galicia is not on tourists’ radars. After summer, there are hardly visitors at all.

A local surf instructor looked out at a sandy stretch that seemed, to this observer, to have very few people. “There are people now,” he said. “But in three weeks, we’ll have it to ourselves.”

Food + DrinkEverything You Always Wanted To Know About Tapas but Were Afraid To Ask
Tagged
Travel Trip Planning Galicia, Spain
What did you think of this story?
Meh
Good
Awesome

How To Piss Off Someone From Galicia, Spain

27 Things To Do in Galicia Before You Die

13 Foods (and Drinks) You Have To Try in Galicia

9 Signs You Were Born and Raised in Galicia

How To Pack for the Camino de Santiago Pilgrimage Trail