Spam is having a bit of a moment. You may have noticed it slapped across your Instagram feed on everything from pizza to mac and cheese. This sudden trendy resurgence comes after decades of neglect for a product that once filled GIs’ bellies and homemakers’ kitchen cabinets. But while the rest of us were sleeping on this miracle meat, one state in the nation carried on the great tradition of Spam — no, not its home state of Minnesota, but Hawaii.

When Spam hit the market in 1937, it was the first canned meat product that didn’t require refrigeration, making it an easy choice for soldiers’ rations. During World War II and the Korean War, GIs carried it to every corner of the Pacific. In addition to Hawaii, locals in the Philippines, Guam, South Korea, and other Pacific Islands all took a liking to Spam and quickly adopted it into their own diets, remixing the meat with traditional dishes and reimagining Spam’s potential. Today, Hawaiians consume seven million cans each year while residents of Guam burn through 16 cans per person per year, according to Hormel Foods Corporation, which produces Spam. 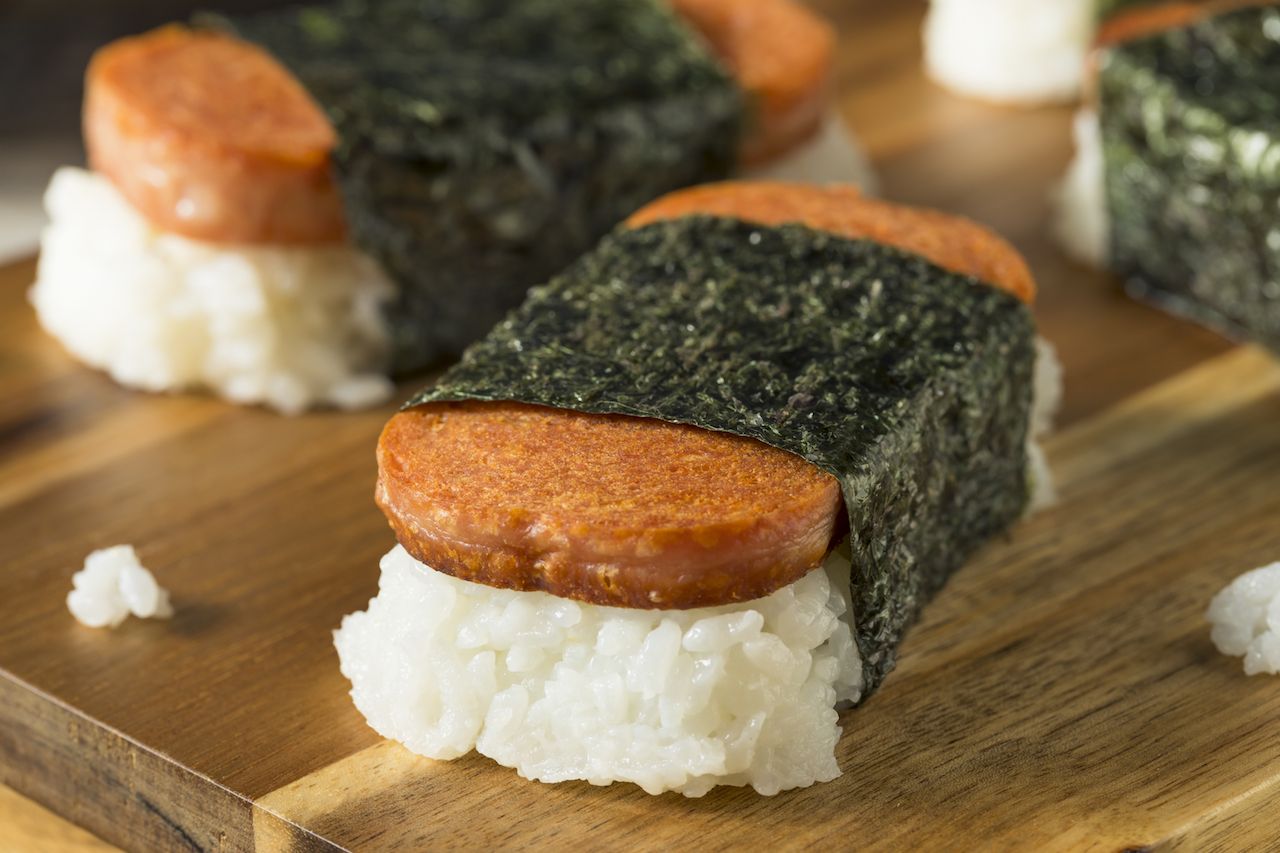 In Hawaii, where Spam is known as the “Hawaiian steak,” Spam-based dishes emerged during the mid-century, borrowing from both traditional American dishes and a medley of immigrant East Asian cuisines that influence the archipelago. You’ll find it most commonly in Spam musubi, a variant of Japanese onigiri made of grilled Spam pressed into a square with white rice and wrapped in nori. Spam fried rice (sometimes served with kimchi) is another adaptation of an Asian dish, but Spam with eggs comes straight from American diners. Then there’s the ultimate comfort food, loco moco, in which Spam teams up with a hamburger patty on top of white rice and is topped with brown gravy and a fried egg. 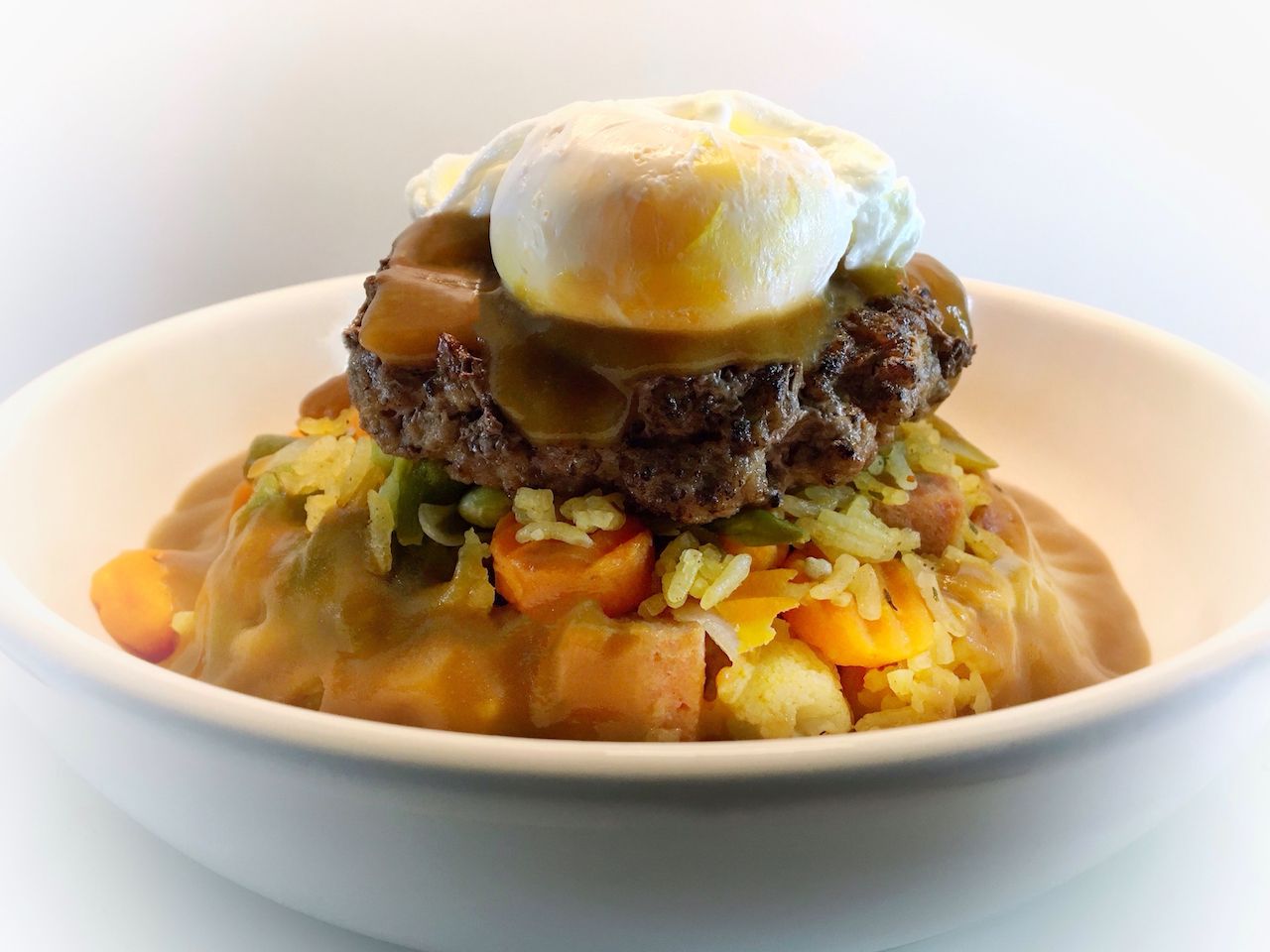 Chefs like Korean-American Roy Choi of LA’s hippest Korean restaurants and Hawaiian Ravi Kapur of San Francisco’s Liholiho Yacht Club have spread the gospel of Spam across the country by adapting it into Instagram bait. But long before mainlanders caught on to Spam’s retro cool and viral potential, Hawaiian chefs were experimenting with the canned meat. 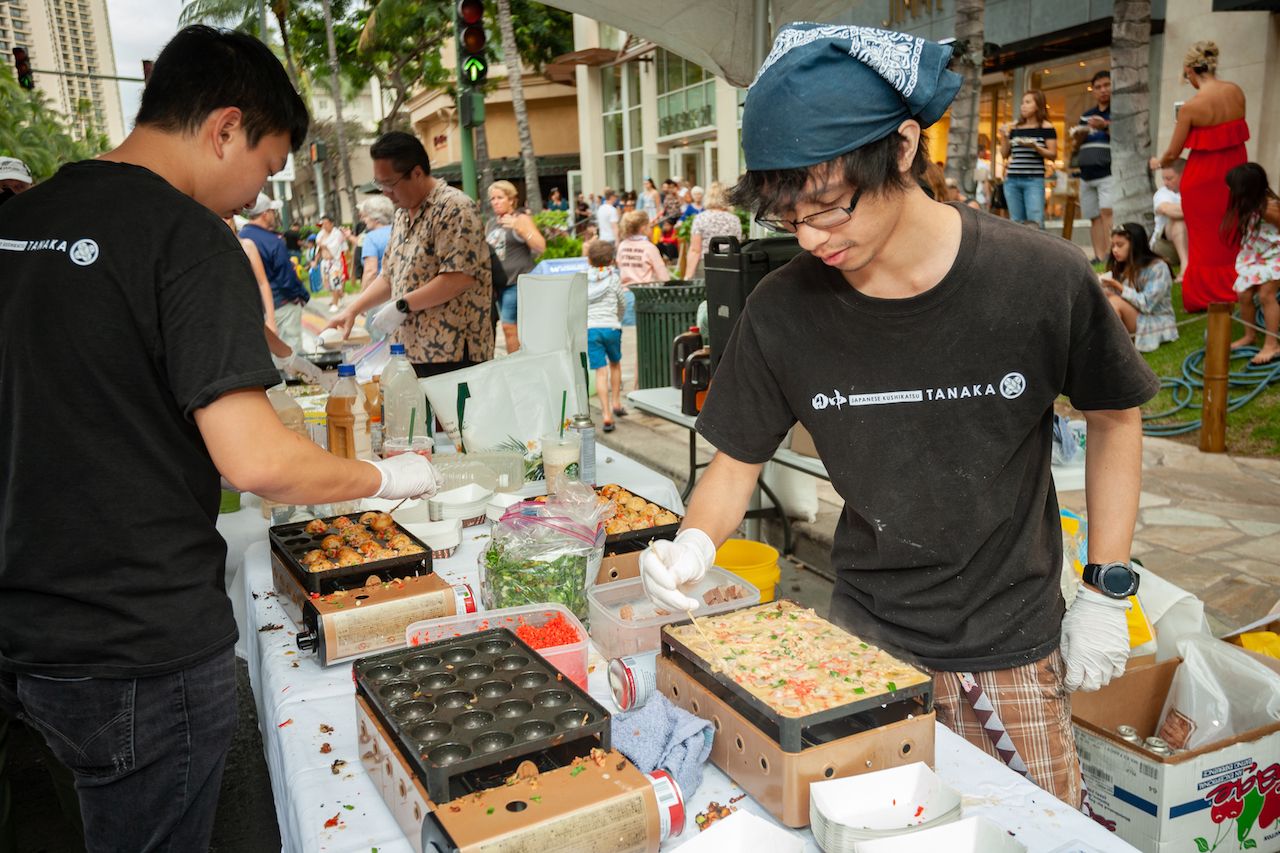 The largest Spam festival in the world.

For the past 16 years, food festival Spam Jam Waikiki on the island of Oahu has showcased chefs putting innovative spins on Spam. Toby Tamaye, marketing director for the festival, says it’s the largest one-night food festival in the state, and Hormel recognizes it as the largest Spam festival in the world. What began as a block party among a few chefs has transformed into a massive event. In 2017, 35,000 visitors and locals attended the Jam, which now fills six blocks of Waikiki’s bustling Kalakaua Avenue.

Tamaye explains Spam Jam has served as a rare opportunity for chefs and locals alike to explore the many possibilities of Spam. “A lot of restaurants don’t normally do Spam,” he says. “Spam is definitely a big part of casual dining and fast food. Our McDonald’s has Spam, and our Jack in the Box has Spam. But people usually cook it at home, so there’s not really a big demand when people go to restaurants for Spam.” 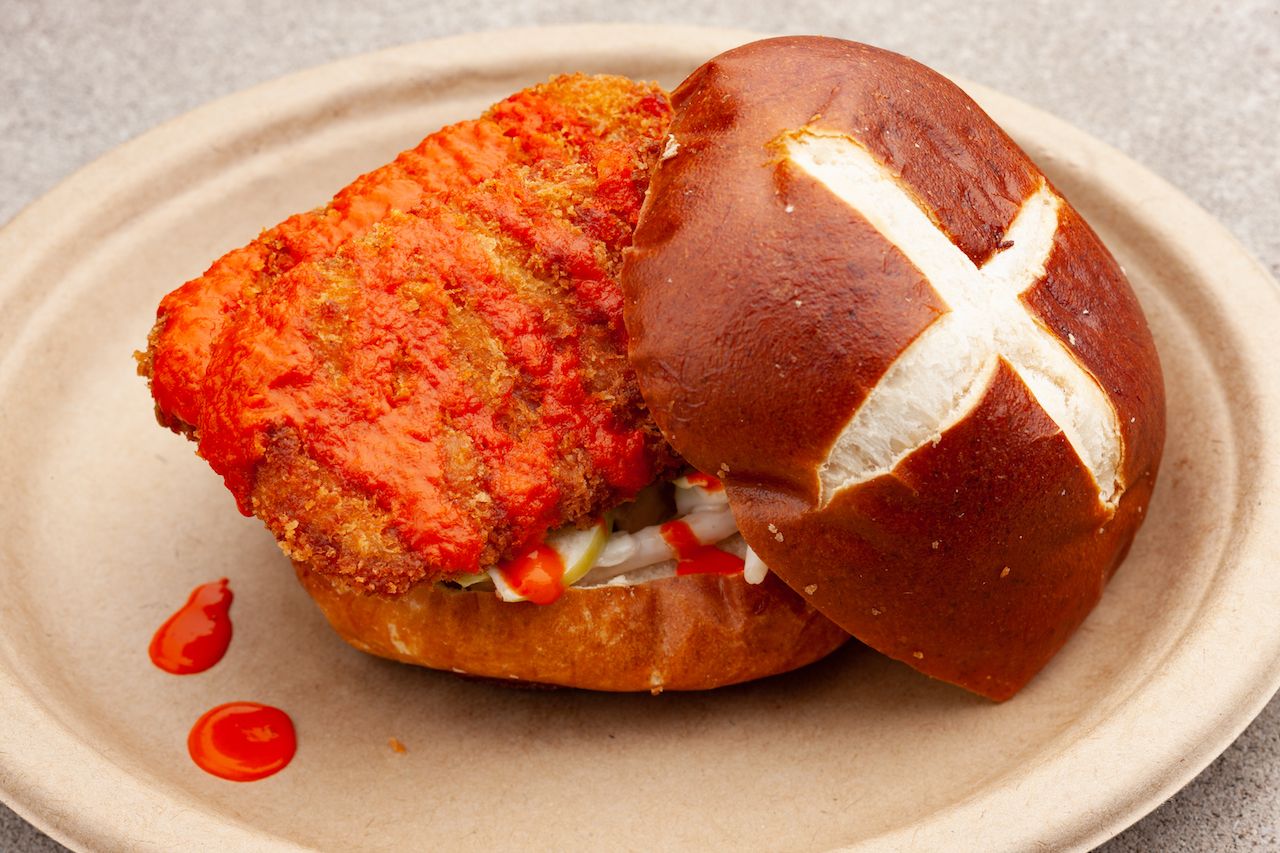 That all changes at Spam Jam, when chefs can go wild with the meat product. Traditional Spam musubi sits alongside innovative recipes drawing on every cuisine represented in the state. Tamaye says, “We have Spam dim sum, Spam katsu on a stick, Spam fries with dipping sauces. We have takoyaki and gyoza filled with Spam. We even have Spam popsicles, Spam cupcakes, Spam cheesecakes. We have Chinese, we have Mexican, we have local cuisine, we have Thai, we have Japanese.” Hormel even uses Spam Jam as a testing ground for new products before releasing them nationally. As Tamaye explains, “Half of the people there are local, and if they like it, Hormel knows it works.”

And the Spam fanaticism at Spam Jam extends well beyond eating. Mascots bounce around in human-sized cans, cheeky accessories let visitors show off their brand devotion, and Tamaye even recalls a Spam-themed wedding held at the festival in 2017. 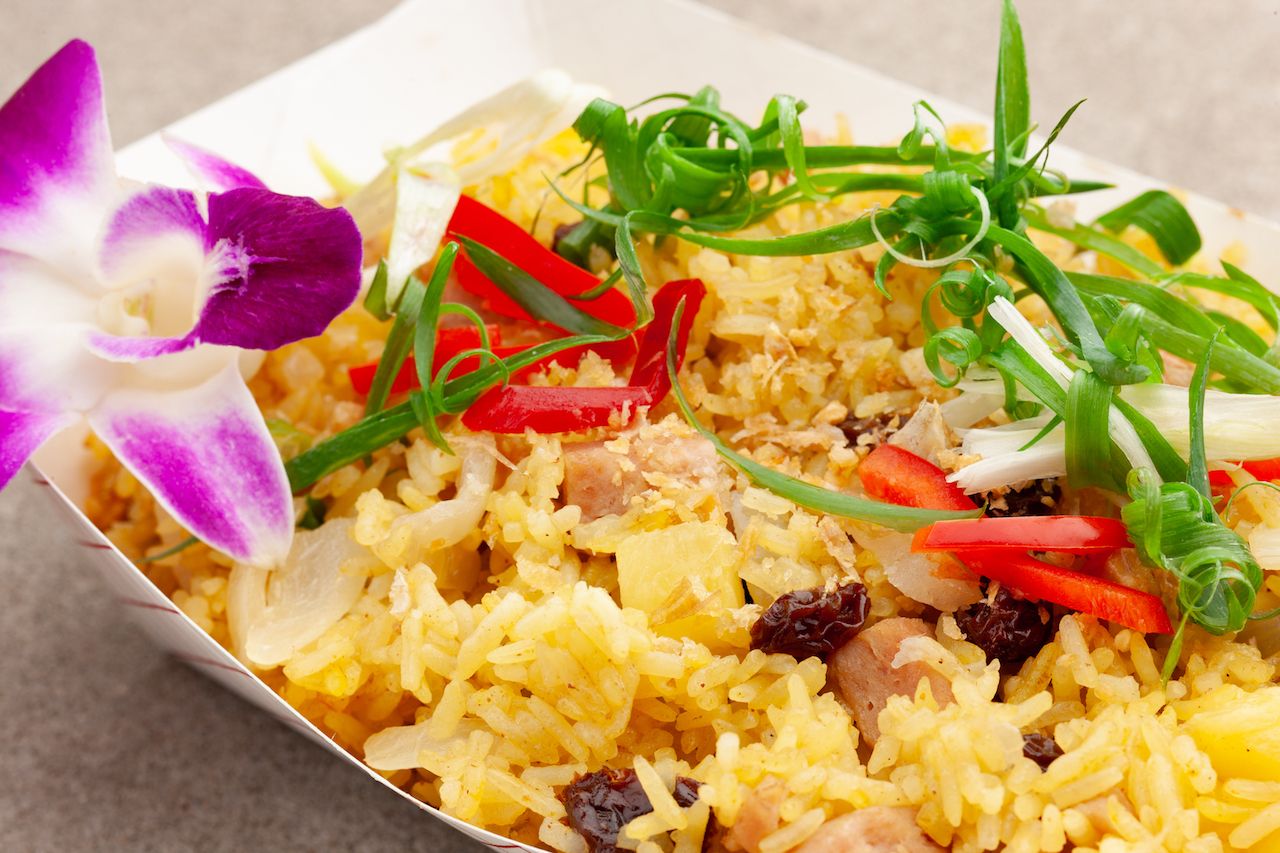 Plan your travels around Spam.

It may be a long time before mainlanders develop enough passion for Spam to incorporate the meat in holy matrimony, but Hawaiians are happy to school curious diners who want to hop on the bandwagon. Tamaye routinely fields inquiries from travelers all over the globe who are planning their next trip to Hawaii around Spam Jam. So if all of this Spam talk has you craving a legit Spam musubi or Spam cupcake, then you should start planning your trip now to visit the real home of all things Spam.

Museums9 Awesome Museums Completely Dedicated To Your Favorite Foods
Tagged
Food + Drink
What did you think of this story?
Meh
Good
Awesome