A dash of spice on your favorite dish can burn your tongue and leave you begging for a glass of water. And yet we keep coming back to peppery hot dishes topped with chilies and spiced with cayenne — no matter how much sweating they cause. The suffering is worth it; even the spiciest dishes on the planet are rich and complex and in flavor, each one providing a tantalizing and unexpected eating experience.

People around the world relish spiciness, adding blistering heaps of seasoning to everything from stews to curries to seafood. From South America to Southeast Asia, spice rules beloved dishes. A soup made with fish bladders and potatoes doused in scorching cheese sauce are just the beginning. The heat can be hard to take, but worth it. Here are 10 of the spiciest dishes on the planet any chili devotee needs to try. 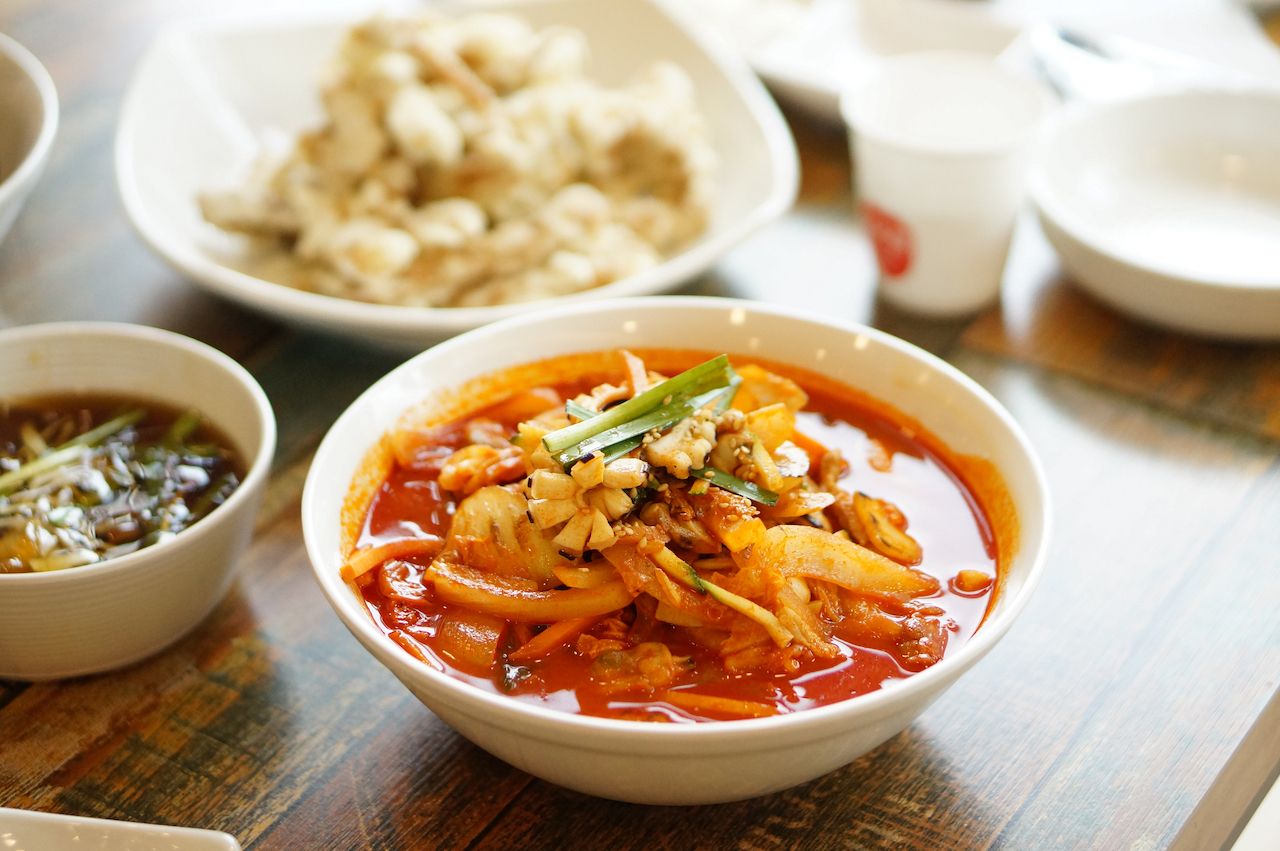 Chinese immigrants who settled in Incheon, Korea, created jjambbong in the 1800s. This spicy Korean noodle soup brings the fire. It’s loaded with seafood like squid and mussels, pork, heaps of noodles, and carrots, zucchini, and cabbage. The red broth is flavored with kelp and gochugaru, Korean chili powder made with sun-dried Korean red chili peppers that imbue the dish with a sweet and smokey spiciness. 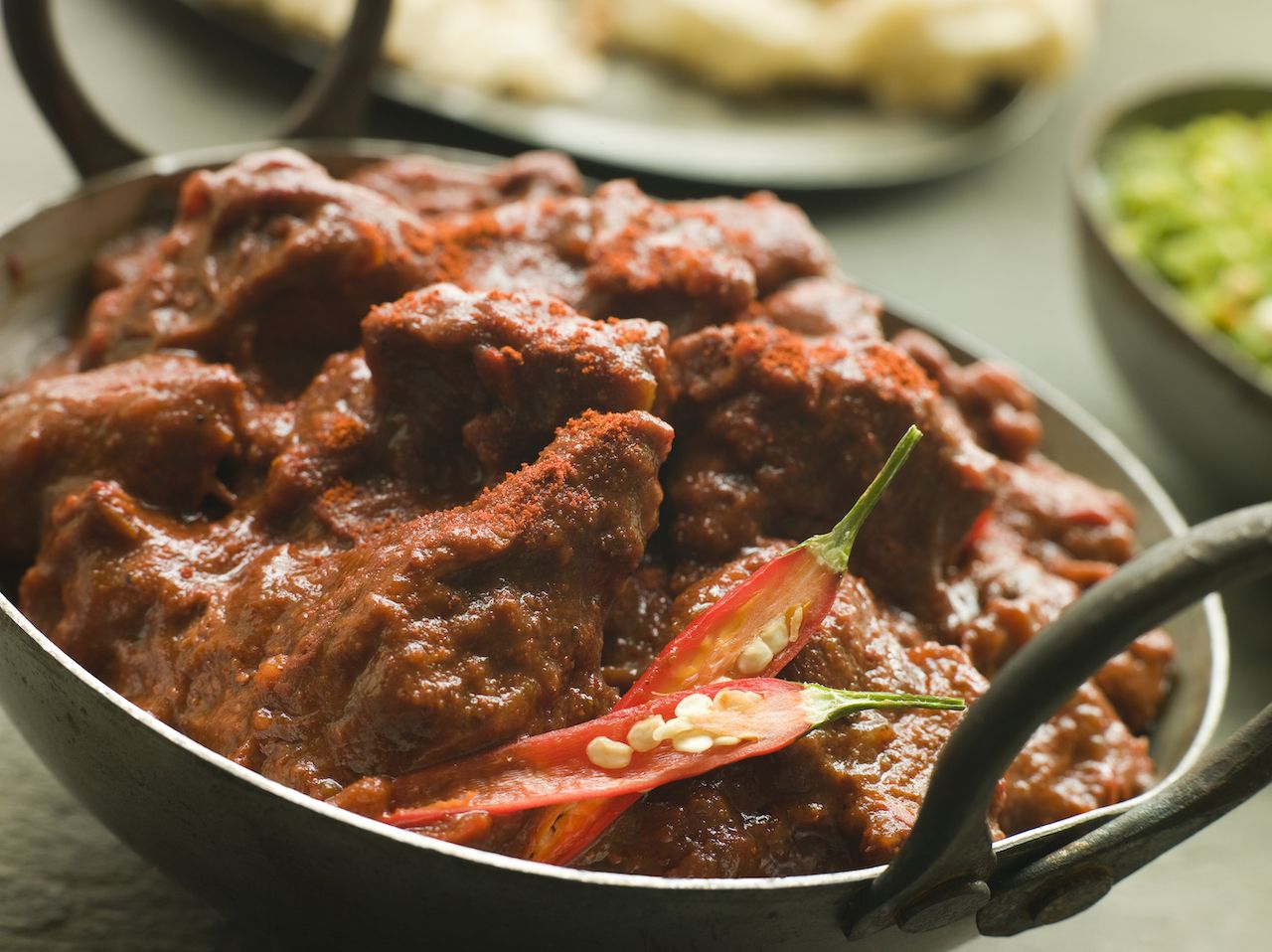 Like many curries people eat outside of India, phaal first emerged in England, specifically in the Bangladeshi-owned restaurants of Birmingham. Considered even spicier than the iconic vindaloo curry (which gets its kick from green chilies, chili powder, garlic, and paprika), phaal takes heat to the next level by adding either habanero or scotch bonnet peppers to the tomato-based sauce. Some daring home cooks have even made phaal curry with ghost peppers, which are about 400 times hotter than Tabasco but have a distinct fruity and sweet flavor — if you can get past the heat. One New York City restaurant describes phaal curry like this: “excruciatingly hot curry, more pain and sweat than flavor.” 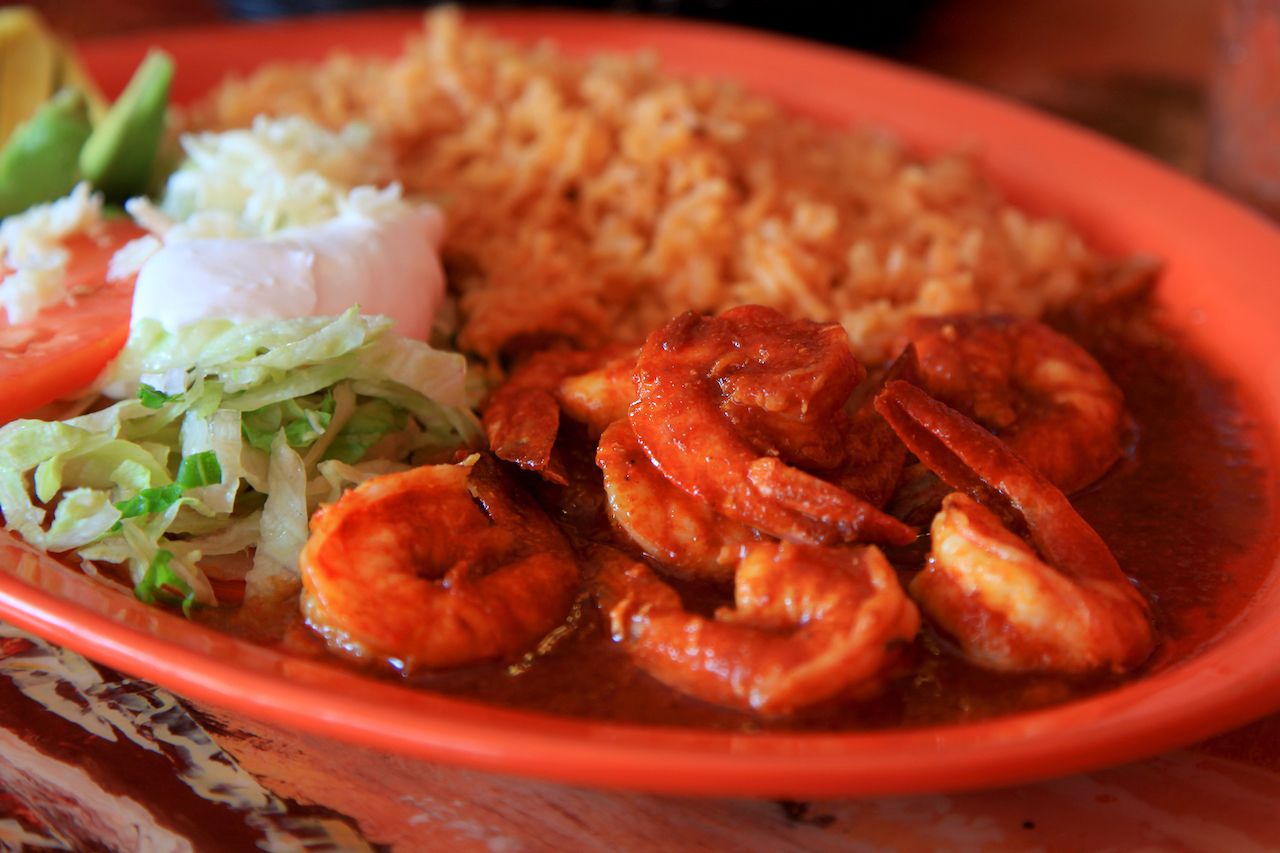 In this Mexican dish, juicy shrimp get a spicy upgrade courtesy of a thick sauce made from dried guajillo and arbol chiles. Though this is simple in execution, there are many different versions that pop up at Tex-Mex restaurants, including versions doused in barbecue sauce or habanero salsa, or topped with chipotle peppers.

This braised chicken stew is simple but packs a punch. The bright red broth gets its spicy flavor from dried guajillo chiles and chiles de arbol, but the key ingredient might be epazote, a pungent herb with the flavor of licorice. Thankfully, the stew’s tomato base helps temper the heat from chilies. Chilate de pollo likely originated in Oaxaca, which is known for its dark red, smoky pasilla chilies. 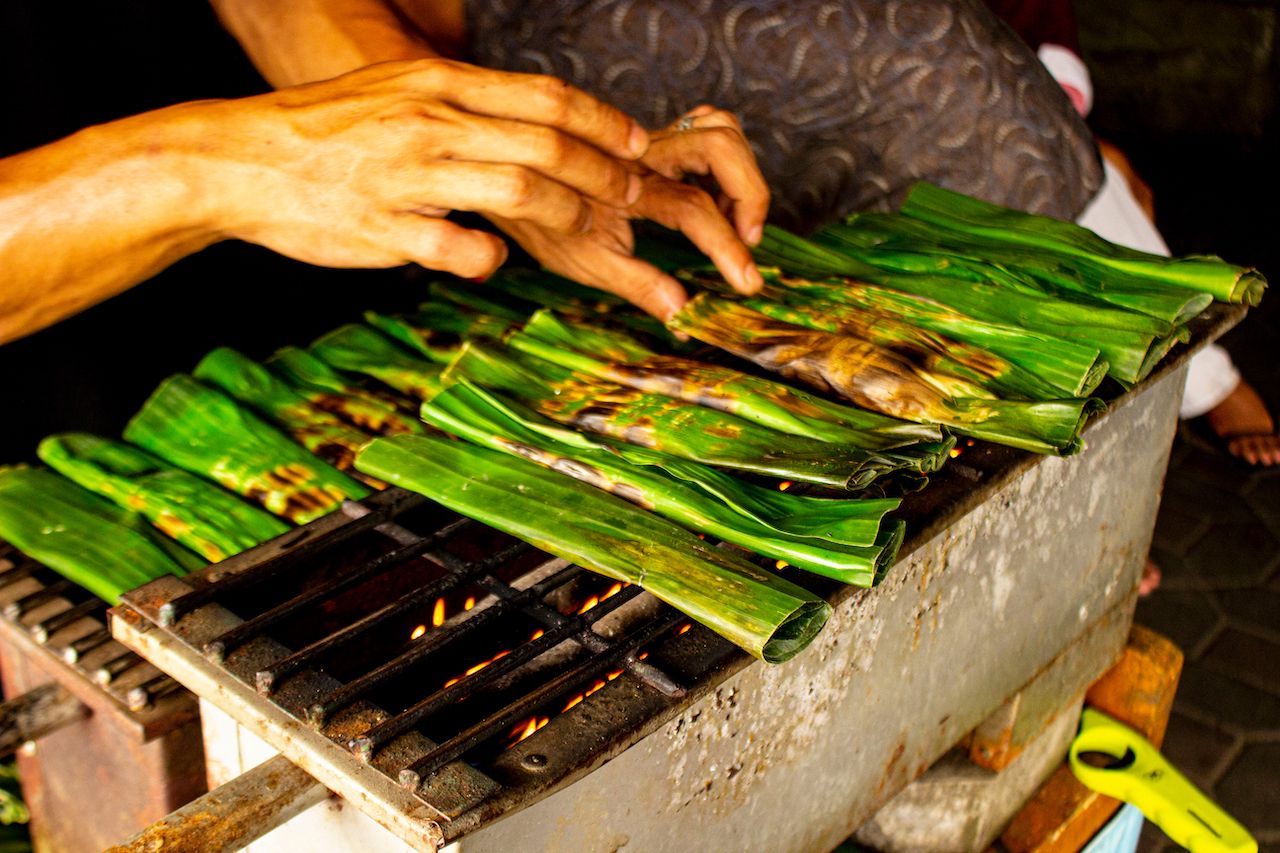 This spicy fish cake is a mainstay of the cuisine of the Peranakan people, who are Chinese immigrants who settled in Singapore and Indonesia. At the foundation of this dish is rempah, a spice paste made from a combination of red chilies, garlic, shallot, ginger, lemongrass, and turmeric. A white fish, like mackerel, is blended with the rempah and coconut milk to create a smooth paste (sometimes called a fish custard). This is formed into rectangles and wrapped in banana leaves. Then, the whole thing is grilled over an open charcoal fire to impart the fish with a smokey flavor. 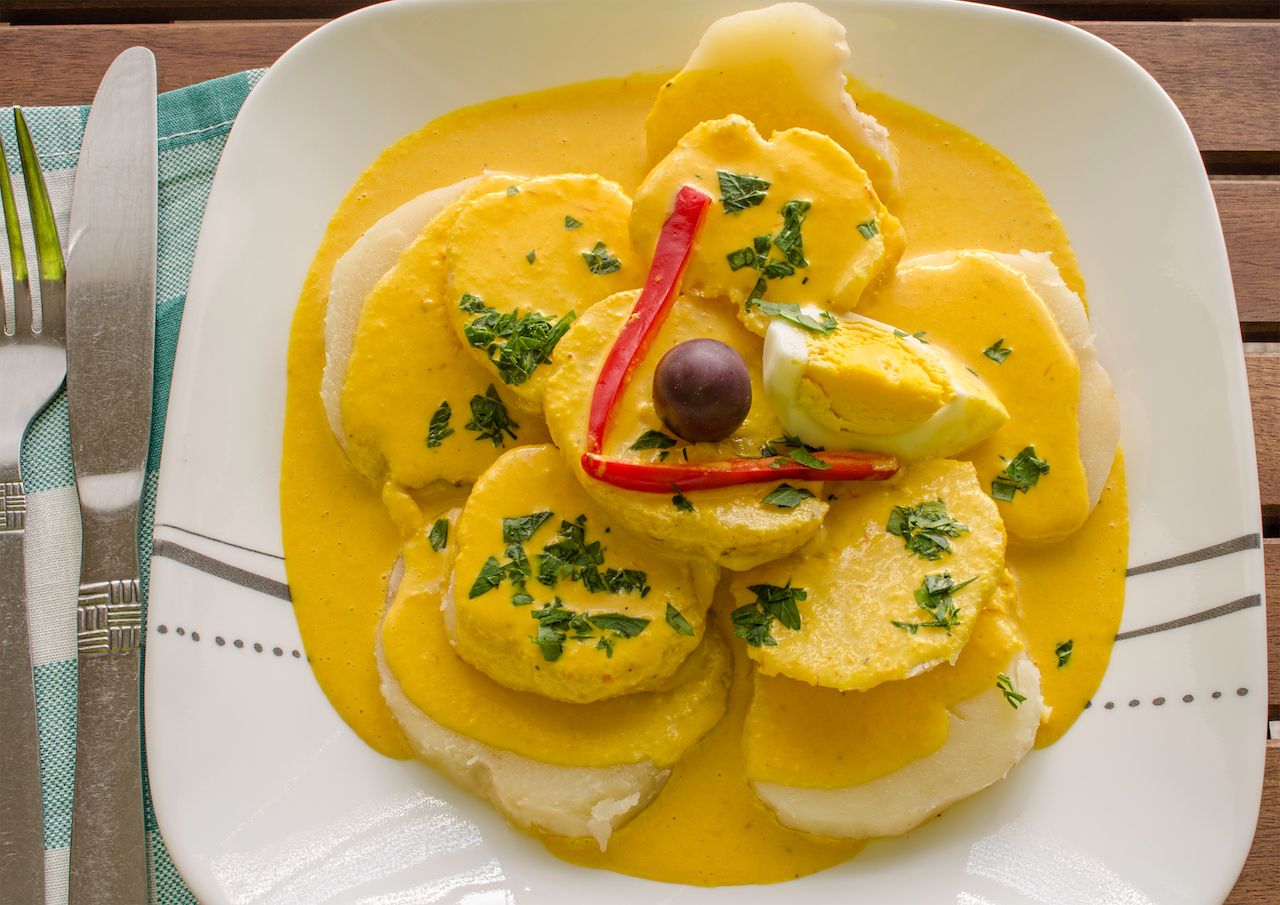 At first glance, you wouldn’t think this Peruvian dish, which is served cold, is spicy. But the main feature of papa a la huancaina is its signature yellow sauce, and it will set your tongue on fire. This potato dish, which comes from the Huancayo region of Peru, is topped with a cheese sauce made from two key ingredients: aji amarillo chile peppers and queso fresco. According to legend, the dish was originally conceived to feed railway workers. The creamy, spicy sauce is so popular that it’s used as a dip for everything from fried yuca to quail eggs.

Chili-infused dishes are so popular in Peru that one saying goes, “El gringo que come ají, no se mueve de aquí,” which means, “The foreigner that eats hot peppers will never leave Peru.” 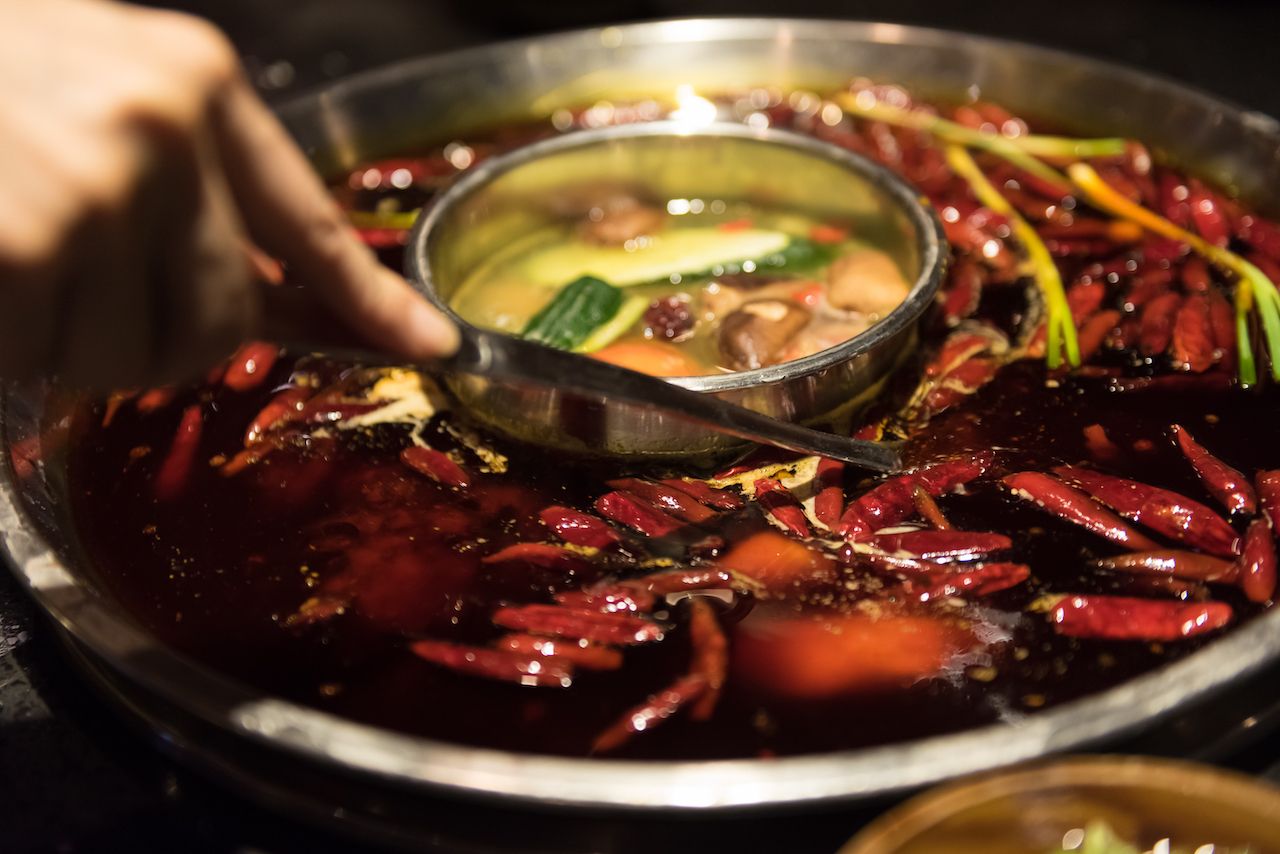 The best way to describe Sichuan hot pot? Fiery. Hot pot works like this: Bowls of deep, red, steaming, bubbling broth infused with whole dried Sichuan red chiles and peppercorns are heated by a hot plate. Raw dishes from tofu, to thin slices of beef, to vegetables like bean sprouts and bok choy are brought out to accompany the soupy mixture. Hot pot is a communal, self-service meal, and diners are required to dunk their sides of choice into the broth until each one is cooked through.

This is the type of heat that will make your eyes water, your mouth burn, and your forehead sweat, but it’s well worth fighting through the pain. If you need more evidence that Sichuan hot pot is the apex of spicy cuisine the world over, just watch Anthony Bourdain force his friend, French chef Eric Ripert, to eat so much of it he nearly passes out.

Gan guo is the “dry pot” version — a “numbing” mix of stir-fried spicy vegetables flavored with peppercorns and chili flakes — without the soup base.

For this Haitian dish, succulent chunks of pork are marinated in a mixture of orange, lemon, and lime juices along with Scotch bonnet chilies. Pork griot is all about acid and tang. Once the pork is finished cooking, it’s served alongside pikliz, a Haitian vegetable relish. The spicy-tart flavor is a favorite in Haiti, where it’s served in just about every household, at both casual occasions and formal events. In a story for Gusto magazine, one Djanan Kernizan wrote that griot means “family, home, and ethnic roots” for Haitian people. 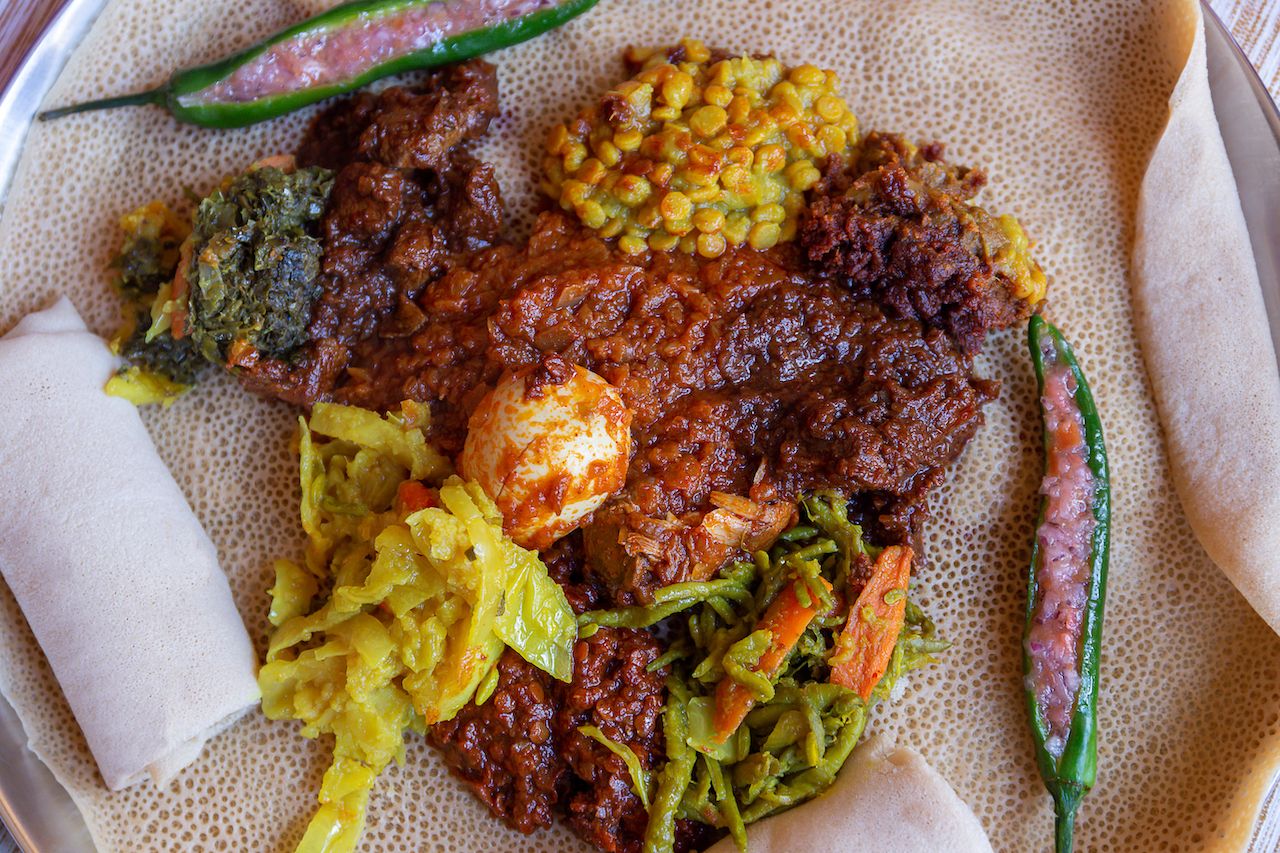 The secret ingredient in this iconic slow-cooked Ethiopian stew is debere, a fiery hot spice blend made by combining dried red chilies, paprika, cayenne pepper, fenugreek, and other spices. Niter kibbeh, Ethiopian clarified butter spiced with garlic and other herbs, adds another dimension of spice. A cup of t’ej — Ethiopian honey wine — is often added to the marinade to add a touch of sweetness. The tender, juicy chunks of chicken, which are simmered in heaps of caramelized onions, are served alongside spongy injera and boiled eggs. Doro wat is often reserved for special occasions, like holidays or when relatives come to visit.

This Thai dish, a cross between a curry and a thick soup, is as pungent as it is spicy. Beloved by the fishing communities of southern Thailand, its foundation is tai pla, a salty sauce made from pickled fish bladder and other intestines. Dried chilies, garlic, galangal, shrimp paste, and turmeric among other spices give this spicy, tangy broth depth and tang. Chunks of dried fish meat are sometimes combined with hearty vegetables like eggplant, bamboo shoots, and long beans to ease some of the spice in this dish, but in its original home, the city Nakhon Si Thammarat in the north of Thailand, nothing is added to the dish to cut its heat.

Food + Drink22 of the World’s Hottest Peppers (and Where To Eat Them)
Tagged
Food + Drink
What did you think of this story?
Meh
Good
Awesome